Readers have asked for a post about how we store our television.  I’ve never blogged about it because our wall unit isn’t a DIY project, it’s modular Ikea furniture – the Besta series.  It’s one of only three Ikea pieces we own and it isn’t perfect, but I love it for a few important reasons that I’m happy to share!

When we moved into the townhouse, I made a deal with Hubby: we’d buy a new flat screen television but only once we had made a new unit for it.  No way was a pricey, giant TV going on the wibbly wobbly dresser that held our tube TV (crash. boom. Tanya cries).  After months of planning and sketching we were no closer to the DIY wall unit dreams and Hubby was so, so sad.  One day I turned to him and said “wanna just go to Ikea, get a wall unit and buy a TV this afternoon?”  I’m not sure he’s ever loved me more.  Making Hubby happy is reason number one I love the wall unit.  Plus, I do love movie night with the bigger screen.

2. Even without doors, it helps hide the TV

The best and most logical living room arrangement (remember, it’s teeny) has the wall unit positioned as the first thing people see when they walk in the front door.  Because we added a display cabinet to the right of the television, guests aren’t immediately hit over the head with the presence of our TV.  In fact, it’s barely noticeable from certain angles. 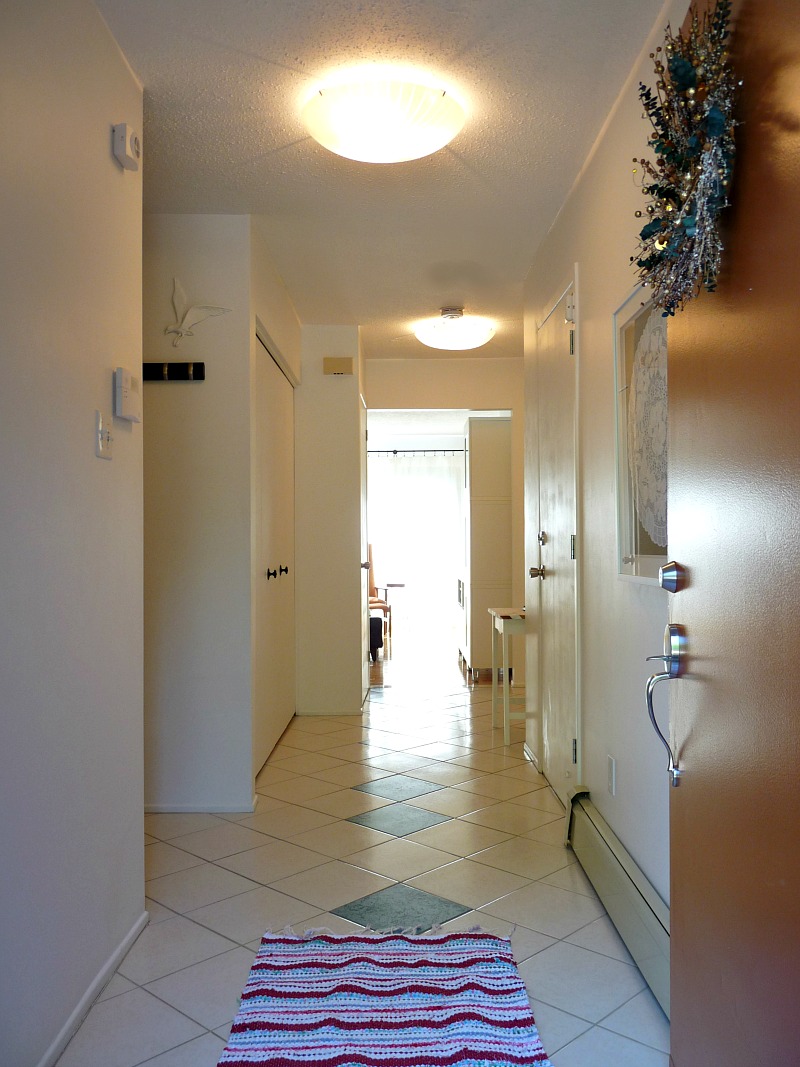 Before, the mid-century dresser I painted white left something to be desired and definitely made the TV more prominent from the doorway. 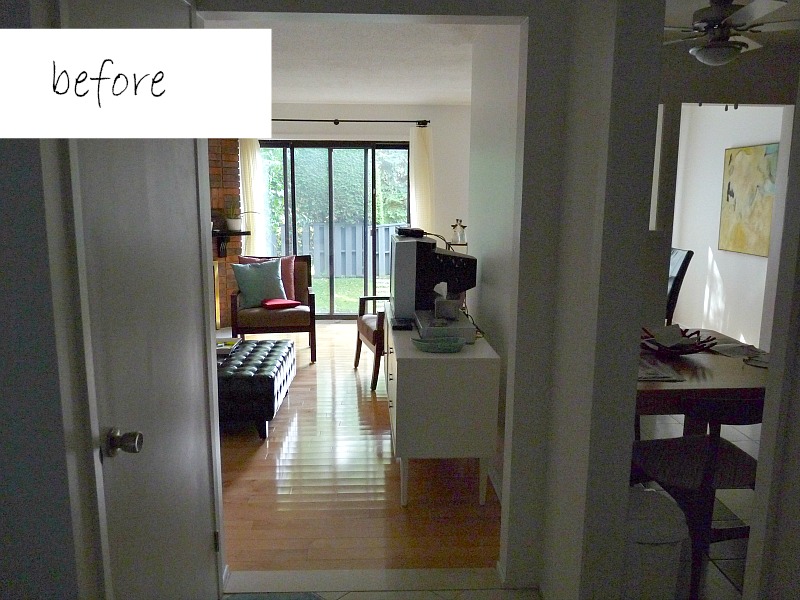 From the other direction, it’s obviously a television, but the wires and everything are hidden. 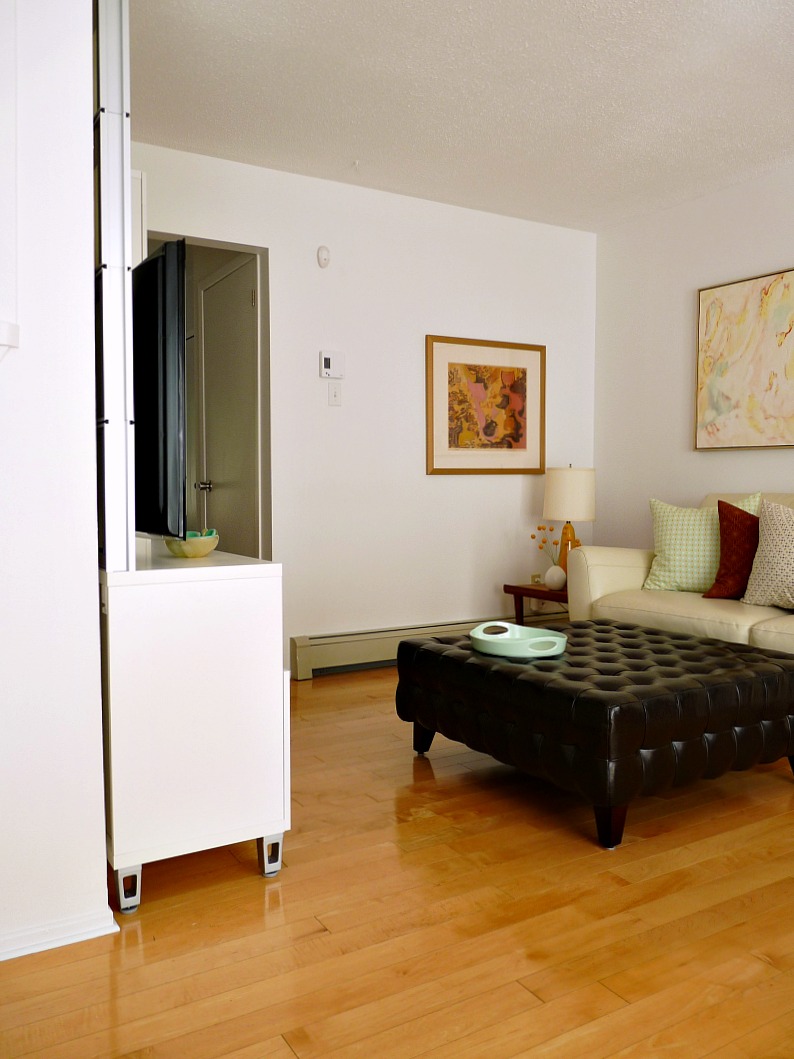 The television mounts to panels, which fit snugly to the wall and encase all the necessary cables.  I would have preferred a closeable unit, with doors, but there just isn’t enough space for doors to open.  Plus, the pretty sea glass green panels are perfect for the room. 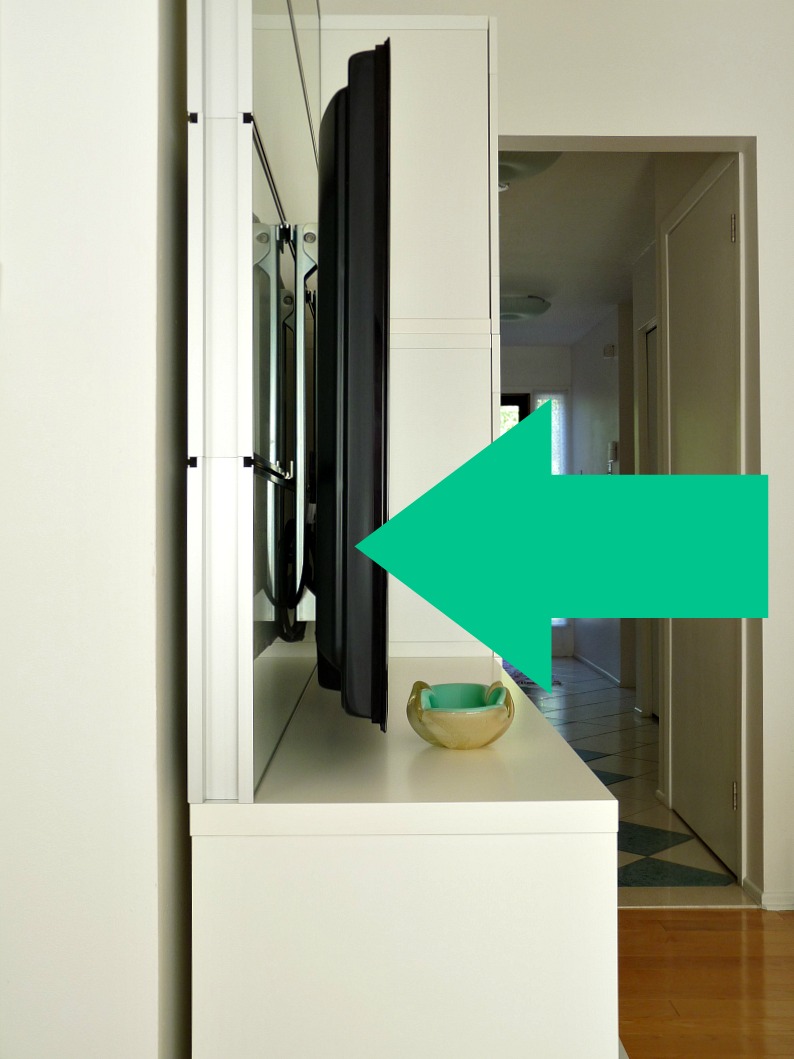 Much better than before, when you could see the wires, the back of the t.v. and the cable box (yes, I’m obsessed with the wires.  I hate wires). 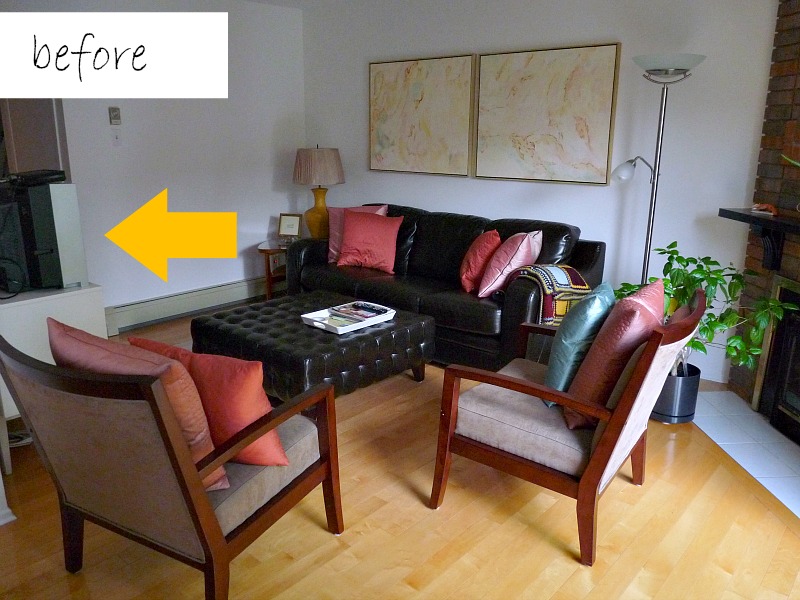 I am not sure I could have designed a better unit (well, maybe now that I have had three years to concoct and execute a plan).  I love the glass panel, the storage cubbies with glass shelves and doors.  The white with glass is airy and, although the unit is large, it doesn’t take over the room.  I’m not in love with the legs, but we sure as heck aren’t dismantling it to change them.  One day I’d love a unit that is made of more quality materials, but so far this hasn’t failed us. 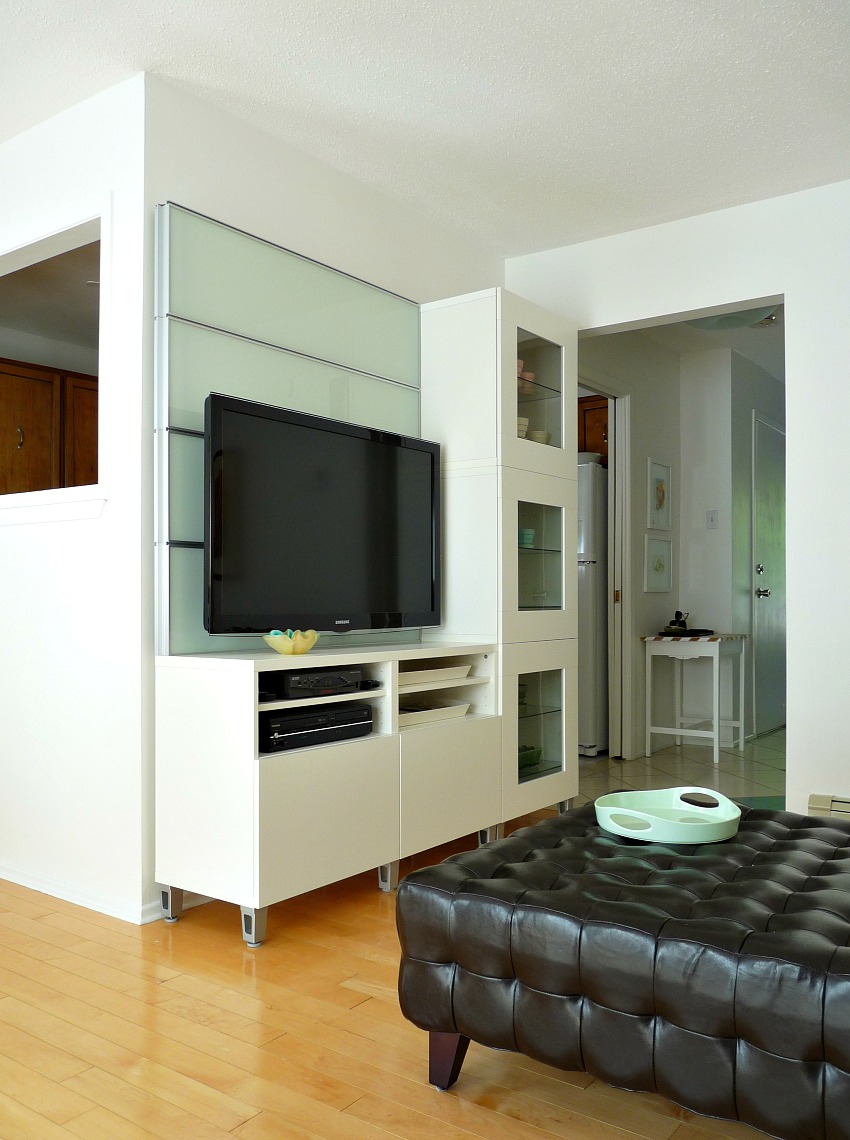 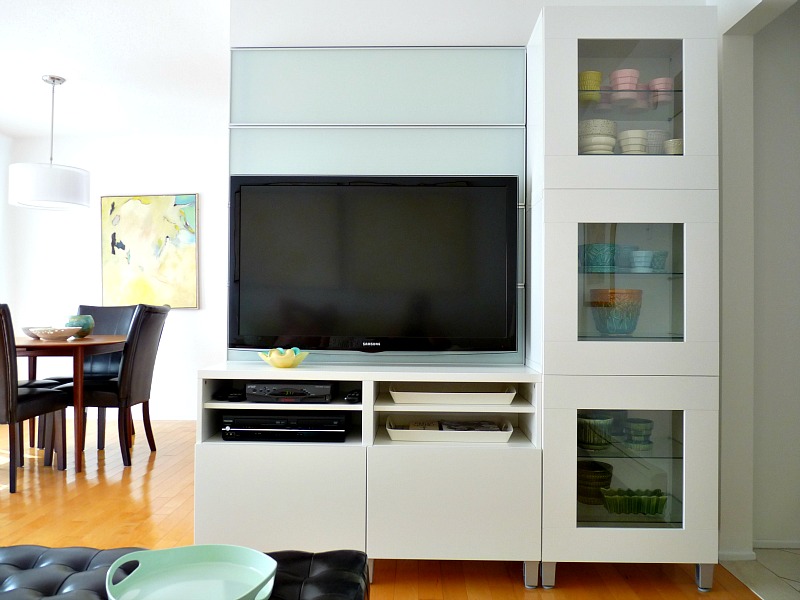 Gotta love modular Ikea stuff!  Our basement doors squeaks by the edge of the wall unit with little room to spare! 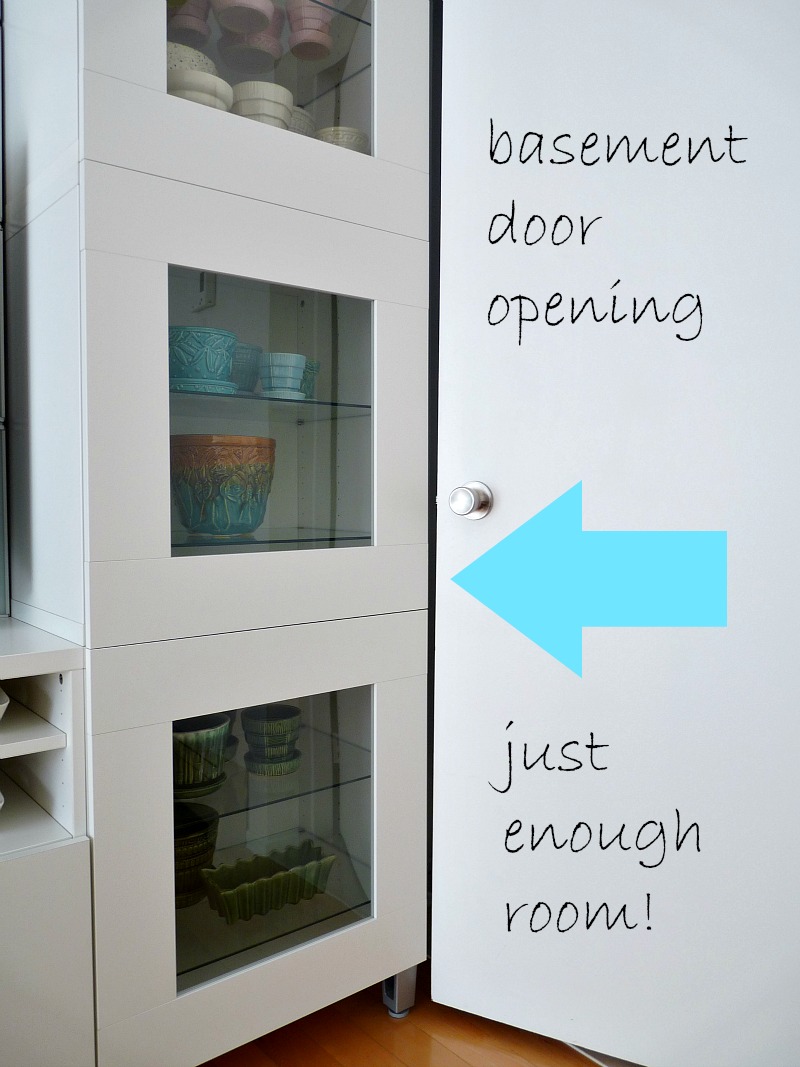 How do you store your television?  I have gotten used to looking at ours, but long for the day it’s totally hidden.  Did you buy a wall unit?  Remake something into cool television storage?  Share your link if you have a good TV storage idea!