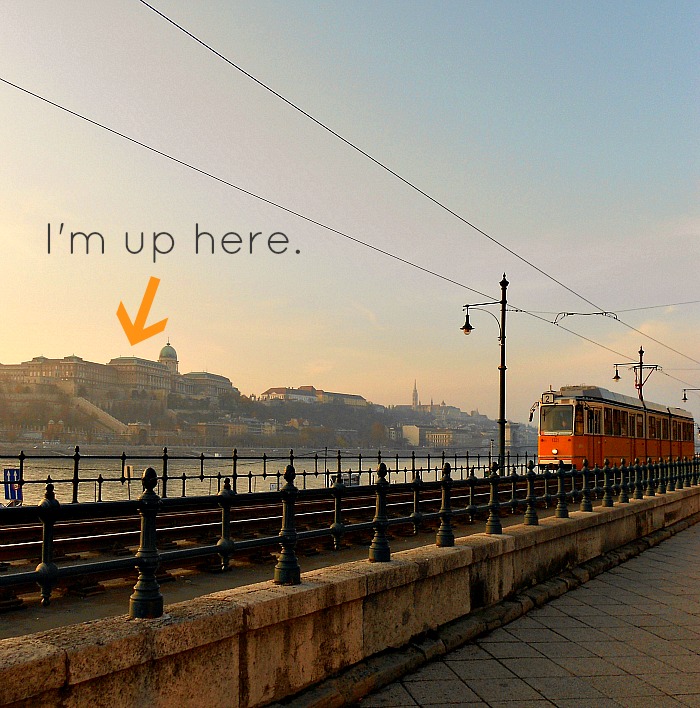 Technically I don’t live in the library (so I can’t really call it “my digs”), but moving library spaces felt as huge as moving apartments would.  Awhile ago, we left that super pretty library (remember the comfy chairs?) and moved to the Hungarian National Library (Szechenyi Library) which, although beautiful and housed in a former CASTLE, on a hill, has rock hard chairs.  My bum cares less about the history and more about not being permanently flattened.  But this library is open until 8:00pm and, with my research deadline looming, late nights have been necessary!

The whole area by the library is a major tourist attraction, with the former castle now acting as a museum as well (this part of Hungary is on my swell new day timer too).  Up here you will also find important sites like Matthias Church (that’s the church with the stunning turquoise roof in this series of photos) and Fisherman’s Bastion.  Plus there is an excellent view of the city, including striking views of the Parliament.

The first few nights we worked late, we stumbled out of the library dazed and alarmed that the local patisseries were closed (no cake?!?), but now we’ve learned to stop and marvel.  What a treat for the eyes (I’m not sure my belly needs any more treats anyway).

Really foggy nights (or is this smog?) make for an even more amazing sight, because the world looks fuzzy and glowy.

Yup, the heat is on in terms of needing to really boogie to get the rest of my research done, ideally by mid-December, but the heat is also literally on at home.  Readers had asked how our weird little heating system works and now I know!  It’s called a “cserép kályha,” which means tile stove (here’s a bunch more), and it is heated with gas.  The pilot light was a little alarming at first, but we got used to it and really love this heating system!  It heats metal behind the stove and the tiles keep the heat, radiating it into the room.  I haven’t had a gas bill yet (I’m scared!) but we rarely turn it on because it keeps the apartment toasty for long, so I’m hoping it’s cheap to run.  It extends to the other side of the room, where we tuck our clothes dryer, which makes the rest of the apartment warm, plus it dries our clothes in record time!

Coming home is a treat because (being that I am so silly), I barely packed enough warm clothes.  I had to buy a hat and warmer socks!  I think I thought, “I’m a tough Canadian, we get 50 feet of snow, what’s a Hungarian fall to me??”  But boy, is it damp here – that bone chilling, ear hurting cold.  Especially when one is traipsing around in a fake version of the Labyrinth of Buda Castle.