This year I thought I’d explain, but I’ve been delaying this post because I’m worried about accidentally coming across as preachy or sounding about as fun as a sack of potatoes.  These are my very personal reasons for not celebrating Christmas and I’m not out to change people’s minds or make Christmas less fun. 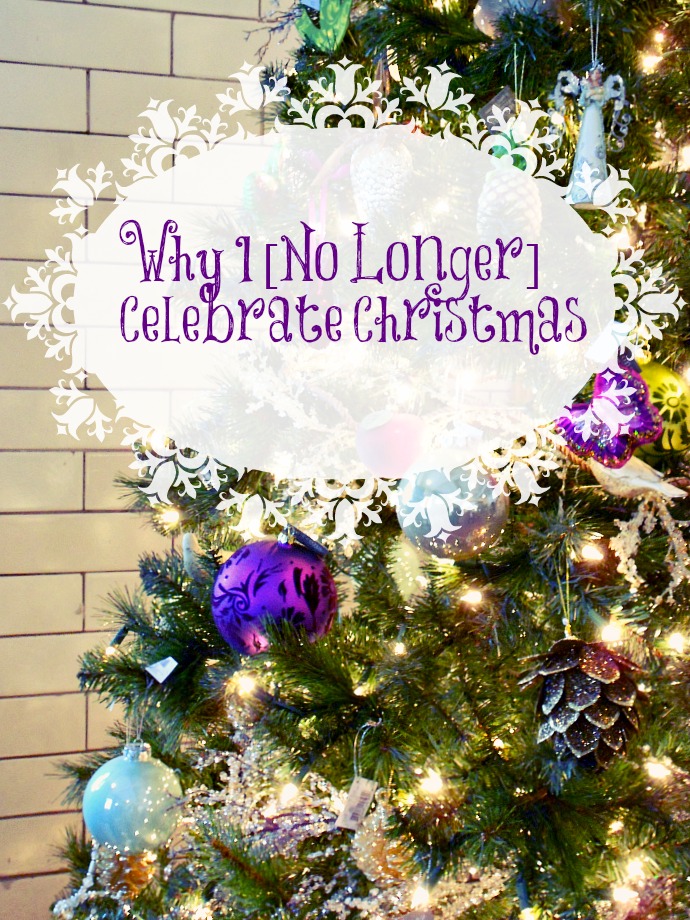 The Question: Why don’t you celebrate Christmas (anymore)?

I’m not Christian.  Even though I went to a Catholic school from kindergarten until the end of high school, school-time masses involved me siting alone in the pew while everyone awkwardly squeezed by me to get their host.  I know that what we call “Christmas” has many secular aspects, and many folks who exchange gifts this time of year and put up a tree aren’t Christian either, but I just feel weird about celebrating a holiday steeped in religious meaning when I am not a religious person.  I am sensitive to people wanting to keep Christ in “Christmas,” so I think it’s more appropriate that I don’t celebrate.

At one time, my family (parents and little me) “did” Christmas, but only the secular aspects.  We divided our time between family in Toronto and Thunder Bay, which often meant scary, cross province drives in insane blizzards, or super expensive flights coupled with suitcases containing only a spare pair of gotch and dozens of gifts.  It was often very stressful.

We continued to celebrate Christmas until the year before I left my hometown for grad school.  I wanted to check out some universities in Vancouver, BC and “Christmas break” was the only free time, so my Mom, Dad and I toured Vancouver instead.  We loved the lack of preparation and stress and rushing around.  We still got to be together as a family but it was more relaxing, and on our own terms if that makes sense.  It was liberating to to spend time together without having to pay homage to a date that held no significance for us.

The following year, after a lot of thought, we made a conscious decision to no longer celebrate Christmas.  At the end of the day, we weren’t celebrating Christmas via any religious expression, and we weren’t enjoying the commercial aspects, so we decided Christmas wasn’t for us.  Frankly, I was also struggling with the dominance of Christianity (reflected strongly in the marketplace, like when Silent Night plays endlessly in every mall), while the many other religions practiced in Canada are marginalized.

After I moved away from my hometown, my parents and Handy Hubby (who was still Buildy Boyfriend then), went to Montreal for a little R&R&R (resting, relaxing and reconnecting).  When Hubby and I got married in December the next year, we took off for a Grecian Honeymoon and spent “Christmas” there.  A Christmassy Christmastime is now a distant memory.  We travel during the holidays.  Capping off each year by seeing more of the world has become something we really look forward to, especially because Hubs and I spend our anniversary somewhere special each year as a result!  Starting each year feeling relaxed is an added bonus.

Most of our family has been pretty cool about our decision, and have respected it (even if they don’t quite understand or relate).  I am sure they were (and are) a little disappointed, and I appreciate that.  We try to make sure we spend quality time with them at other times of the year.  There are a few relations, though, who I think have taken it personally, and see it as a rejection of them.  Without getting on a soapbox, we try to explain that our reasons are rooted in thinking deeply about whether we consider ourselves religious, what we think about the way in which Christmas dominates over celebrations of other religions, and also our resistance to consumerism.

Even though the decision wasn’t made without serious thought and conviction, I feel like we might have to forever defend the decision.  I am trying to put myself in their shoes and understand, but it is so weird to me.  Frankly, I would love to see my family drop the tree decorating, gift exchange and forced merriment on December 25th, in favor of a more casual celebration at some other time of year, but I would never ever dream of trying to force them to give up Christmas.  I don’t try to push my reasons on anyone, and I’m completely supportive of any and all who celebrate Christmas!  So I have a hard time responding to the sometimes insensitive and manipulative way some folks try to get us to celebrate Christmas.

I am happy that people enjoy Christmas.  I just don’t understand why attendance is mandatory.  And I am frustrated, because I thought in Canada I have freedom of religion, which also means the freedom to not celebrate a religion.  But I guess it is tricky to find a balance between making other people happy, respecting everyone’s beliefs and wishes, and doing what feels right . . . especially when doing what feels right is something a little off the beaten path.