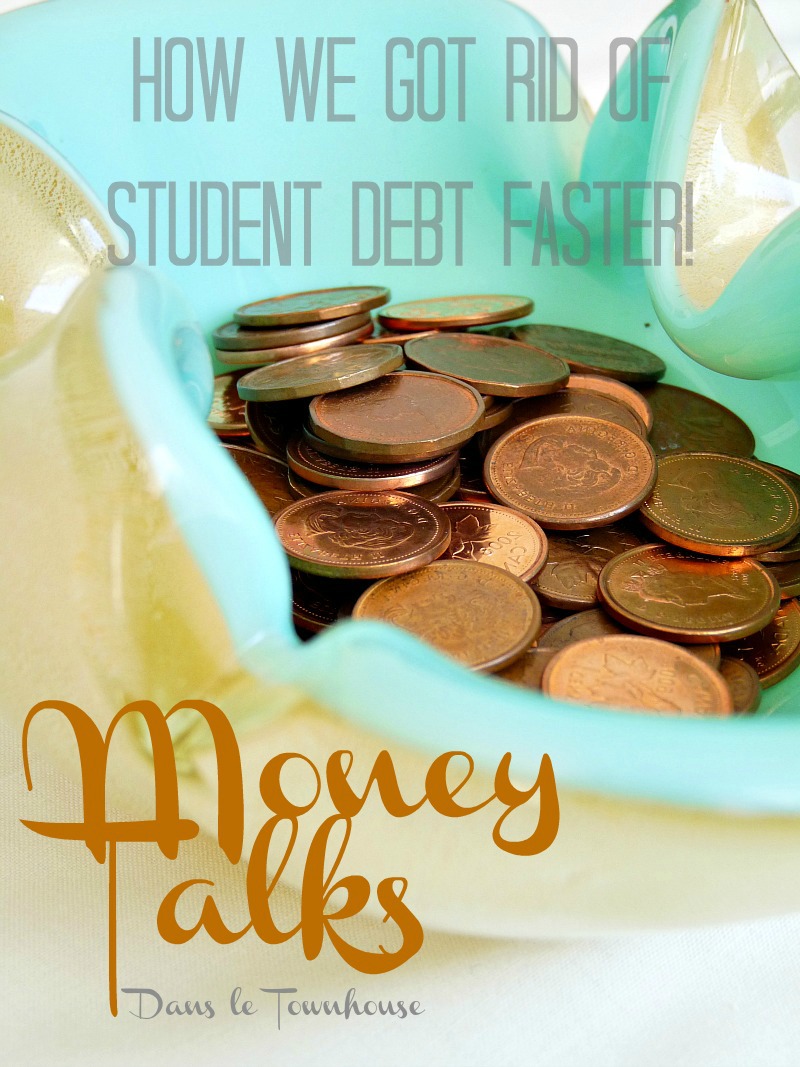 In this second installment of Money Talks, (click here for the first post) I’m going to spill the beans on how we paid our student debt faster.

First, I have a confession: I never accumulated student debt.  Early on, my parents told me they had no funds for university and I’d have to win scholarships or go broke.  I chose the former and I feel VERY privileged to have parents who helped facilitate that goal.   To help me study successfully, I had my own study space (a little nook at the top of the stairs), and, as an added bonus, nobody smacked sixteen year old
me when she stomped into the living room of our small home, demanding the TV be turned
down because “I’m studying, you asshats”.  Through a combination of hard work, good luck and a strong support system, I won scholarships for my undergrad degree.  I was also fortunate enough to have been able to live at home for my undergrad, which saved me oodles of money, but I did work a lot of jobs so as not be a mooch.  One semester I worked full-time, went to school full-time and sat on the Board of Directors for a not-for-profit organization.  I gained a lot of weight from stress-eating that year 🙁  I won scholarships for my MA and am on a scholarship right now for my PhD (which runs out soon).  I have worked part time through grad school, but Hubby is the super star.  He is a super smart cookie and landed a job he loves right out of school, earning much more than me and landing the oh-so-fun responsibility of primary breadwinner.  I am completely aware that my income is meager, he’s supporting me right now, and I’d likely have a big fat loan if it weren’t for him.

I say all this NOT because I want to make it sound like our student debt was Hubby’s responsibility or fault.  I just want to point out that Hubs and I are lucky that we weren’t a couple with two sets of debt.  Still, the loan wasn’t small – we could have bought one of these.  Everyone’s situation is different but, at the end of the day, debt stinks for all of us.  Here are some things that helped us say “buh-bye” to a scary amount of student debt in 3 years (and shaved off 7 years from the original repayment plan).

1. We worked as a team (this applies to single folks too!).

I’m not going to lie, I was a bit shocked to all of a sudden be facing
student debt because I had dodged that bullet for so long.  At first, I felt glum and I stubbornly refused to acknowledge responsibility.  I quickly realized that sharing a life together didn’t just mean sharing incomes (yay!), it also meant sharing debt.  We pooled our incomes, throwing whatever we could at the debt, and scrimped and saved together, which made us a stronger debt-fighting team.  Because we were in it together, it also felt less stressful.  I know not all couples pool incomes like we do, but I think working together can happen in other ways as well.  For example, if Sam has debt but Jamie doesn’t, Jamie can take on more chores around the house so Sam can work extra shifts to put money toward the debt.  If Sally is single, she can still work as a team by telling her friends and family about her debt and asking that they not lure her out for expensive social gatherings, but help her save cash by doing more free or inexpensive things, like spending time outdoors or having potluck parties.  There’s lots of things friends and family can do to help one another get out of debt (and not just student debt): forgoing gift giving until debts are cleared, car-pooling, hosting clothing swaps, etc.

2. We faced the debt.  Showed the debt who is boss.  And tricked ourselves a little.

After deciding to work as a team, the most important step was saying, “Hey, student debt.  Bite me”.  I know a lot of people who bury their heads in the sand and avoid thinking about it.  I know, it’s a shock!  I wanted to bury my head too.  Opening those statements felt like being punched.  So many zeroes . . .  But facing it and hatching a plan that suited us were necessary to get rid of it faster.  Part of our plan included building an overpayment into our budget right away, so we automatically thought of our monthly payments as bigger than they were required to be.  We quickly forgot what we had to pay and automatically paid the larger sum we had figured out what manageable.  Essentially, we kind of tricked ourselves into paying more each month.

Hubby
& I read the fine print and tried to understand everything about the loan,
including options for if he didn’t find a job within the grace period,
if we couldn’t make the minimum payment, etc.  Government student loans
usually have lots of fine print, including points that can help people, especially if they’re having trouble making payments, so it’s a good idea to be familiar with the terms.

Hubs was fortunate enough to get a job right away, so we didn’t need the grace period his student loan offered (they vary).  Although some folks need the grace period to find work, some just use it to enjoy their new wage.  I get it.  Paying debt back is about as fun as a root canal, but delaying the inevitable only makes it worse.  We started paying Day One (because that’s when interest started being calculated on the Federal part) and we saved some major bucks.

5. We threw extra money at it.

Any time we had extra money (after we’d saved some, of course), we tossed it on the loan.  Rules stipulating payments also vary, but most loans let you pay some extra.  Although we didn’t make a lot at the time, we did it whenever we could and saved some more money on interest because those extra payments went right to the principle.  Every little bit (even $20 here and there) helped.

6. We found creative ways to save and make more money.

Step #5 was much easier when we started making more money.  I started tutoring and selling my handmade spiders, while Hubby took on overtime work when he could.  We were already into yard sales, so we saved major bucks furnishing our apartment, but I also started a precursor to the Etsy shop, selling a few sweet vintage scores through kijiji.  Consignment shops were great for recouping money from clothes that no longer fit.  I mean it when I say every little bit helped.

7. We put our tax return toward it.

I’m not sure how rules vary from country to country, but the tax we paid on student loans was tax deductible and boosted our income tax return.  Yay!  A silver lining!!  We took all that money and put it onto our loan (saving some to add to our emergency/house buying/please don’t lose your job, Hubby funds).

8. We calculated everything we bought with student loan interest added on.

In the first few years of living together, things were tight and we were on a strict, strict budget.  Any non-essential item we bought, we treated as if we were paying for it with a loan because, basically, any frivolous item kept us from paying down the debt, which in turn incurred more interest.  I think this really helped keep our spending in check at the time.  Did we really want to go out to see a movie when that $15.00 had a prime+2 interest tacked on?  No thanks, a stay at home movie night was good enough!  This is also where teamwork was important: neither of us tempted the other with unnecessary purchases or evenings out.  We started dating as teens, so we were old pros at free date nights!  We entertained ourselves cheaply and helped each other avoid temptations (mmmm, snacks, oooo, purses).  I think the fancy term for what we did is The Spending Fast.  We’re trying to get back to being more frugal.

9. We didn’t buy a house until we saw the light at the end of the tunnel.

This was somewhat a coincidence, but we didn’t buy a house until we were only four months away from repaying the debt.  The timing was pretty lucky and I’m so happy it worked out that way because we learned that it was much easier to fast-track a debt repayment with fixed expenses in an apartment.   In fact, once we bought the townhouse and had to deal with unplanned expenses like a $400 plumbing emergency, rising utility costs, etc., our debt repayment slowed and 4 months turned into 6 or 7.  I’m so happy we didn’t buy a home earlier because it definitely would have slowed our repayment plan.

10. If applicable, pay loans with higher interest rates first.
11. Don’t overextend on debt repayment because paying extra to student loans makes no sense if it pushes you into overdraft, forces you to rely on credit cards or hinders the payment of a mortgage or larger loans.
12. As with mortgages, biweekly payments can save money on interest, even if you put the same amount as you would with a monthly payment (read more about biweekly payments here).
13. Considering transferring a higher interest debt to something with a lower interest rate.  For example, if student debt is actually credit card debt accumulated while getting a degree, paying off the cards with a personal line of credit (which has a much lower interest rate) and then paying that off ASAP might be a good choice – but speak to a financial pro.
14. Remember to keep saving.  It’s tempting to put every cent on debt but it’s important to have a cushion.
15. If you’re really stuck, speak with a professional about options for debt relief, deferring payments or debt consolidation.

Have you tackled a student loan?  What tips have helped you get the student loan monkey off your back?