The kitchen has never felt “just right,” even though it has so many things I love, like the
herringbone tiling we installed and the vintage teak chairs we covered with houndstooth fabric (you have no idea how
many teak stools and chairs with black and white houndstooth I’ve ripped
from magazines and filed).  The black and white floors (already here when we bought the place) have grown on me.  Simple projects made over what was less than desirable, like the chalkboard knife block project and microwave re-do.  I’ve even gotten used to the wood cupboards Hubby loves – the ones that I painstakingly re-varnished, instead of painting like I wanted.

I firmly believe that every space needs art (even if it’s a DIY project or framed scrapbook paper).  I was confident that the right piece would make the room work, but I tried in vain to find it (first we hung a DIY painting, then a photo I took).

I am happy to report, though, that I am now madly in love with the kitchen and finally found unique art that stitches together every aspect of this room: 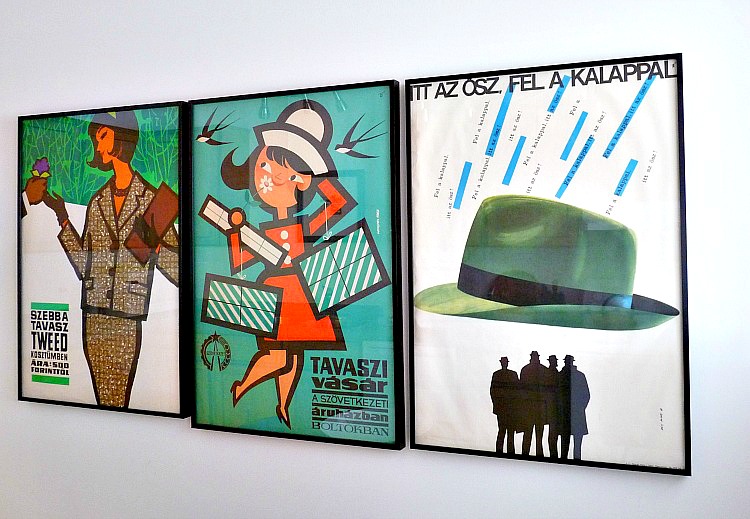 I bought these three vintage posters when I was in Budapest.  Each poster is from the 1960s, when Hungary was Soviet-controlled.  The posters were issued by the Party to encourage Hungarians to shop.  We had them framed in identical, very simple, black metal frames.  We had planned to make floating frames but decided that preservation was important, so we took the pieces to a framer that uses archival grade material.  We skipped matting (it looked weird) but there are little spacers between each poster and the glass, helping air to circulate so the posters don’t get humid and stick to the glass, which can damage the ink.

I originally planned to hang the girl with the parcels separately, but an outlet foiled my plans.  We had totally forgotten an outlet was hiding behind the art that was in the kitchen.  Unless we wanted it smack in the middle of the posters, we would have had to hang them thisclosetogether. 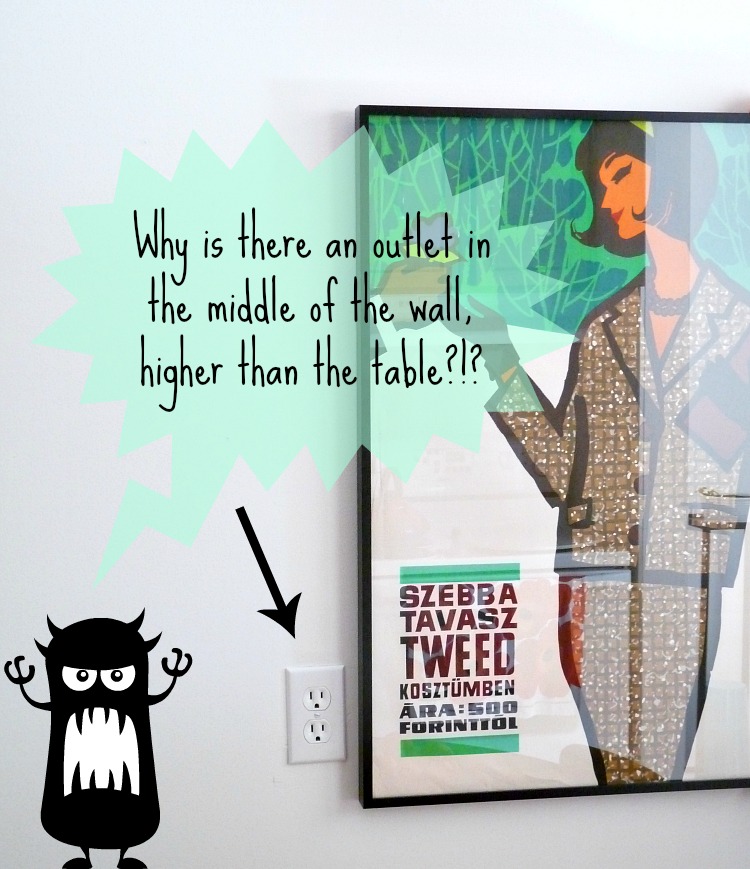 We finally decided to hang all three on one wall.  The middle one covers the outlet, so we were able to space them how we liked.  They are all slightly different in size, so we put the largest one in the middle and lined up the tops, which was Hubby’s genius suggestion.  They really really fill up the wall, adding a lot of visual interest to the kitchen.  The 1960s aesthetic is a perfect fit!  The textiles represented in the posters look fabulous with the houndstooth and herringbone, and the brown in the tweed suit makes the wood cabinetry look intentional. 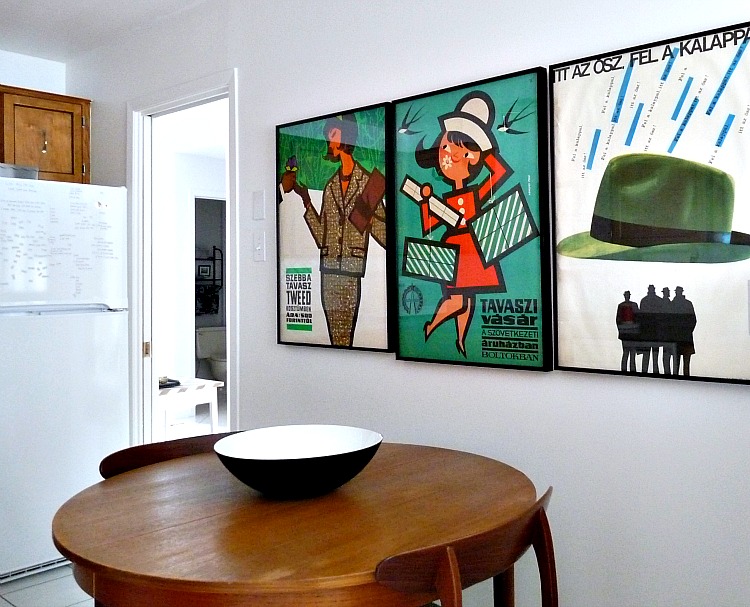 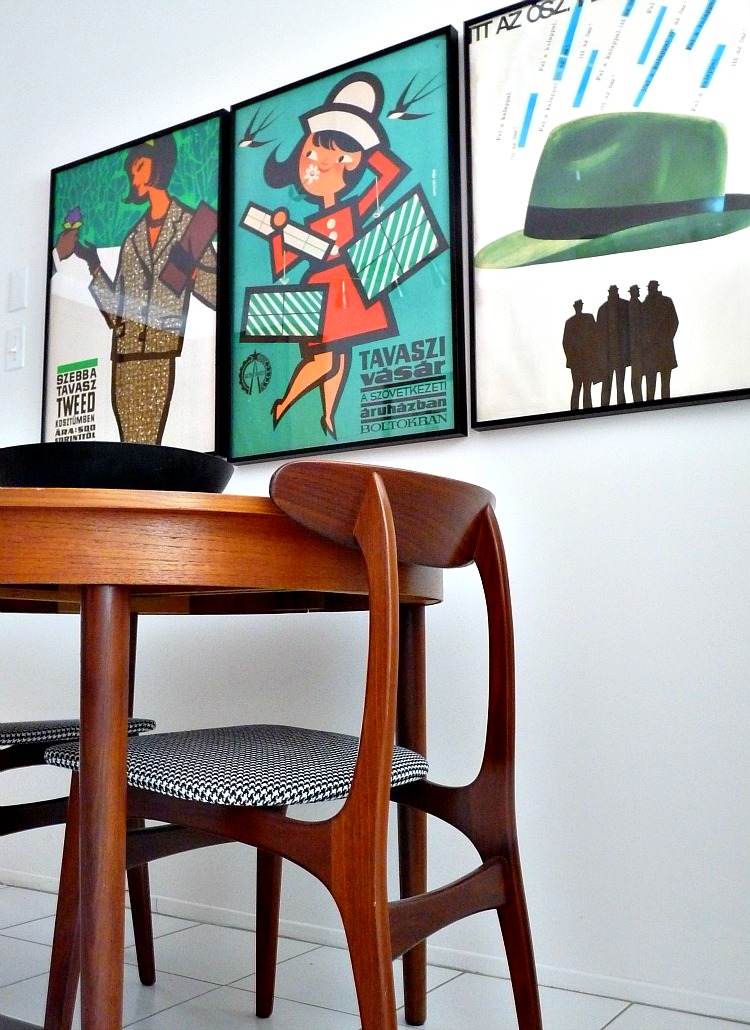 I am planning a few new accessories, like a new kettle (ours broke) and linens, so I’ll take photos of the whole kitchen soon, but I couldn’t wait to show you the new art!

P.S. Want to know what they say?  When Hungarian is translated verbatim, it sounds like Yoda talking so perfect translation is no easy feat.  Here are my super rough translations: 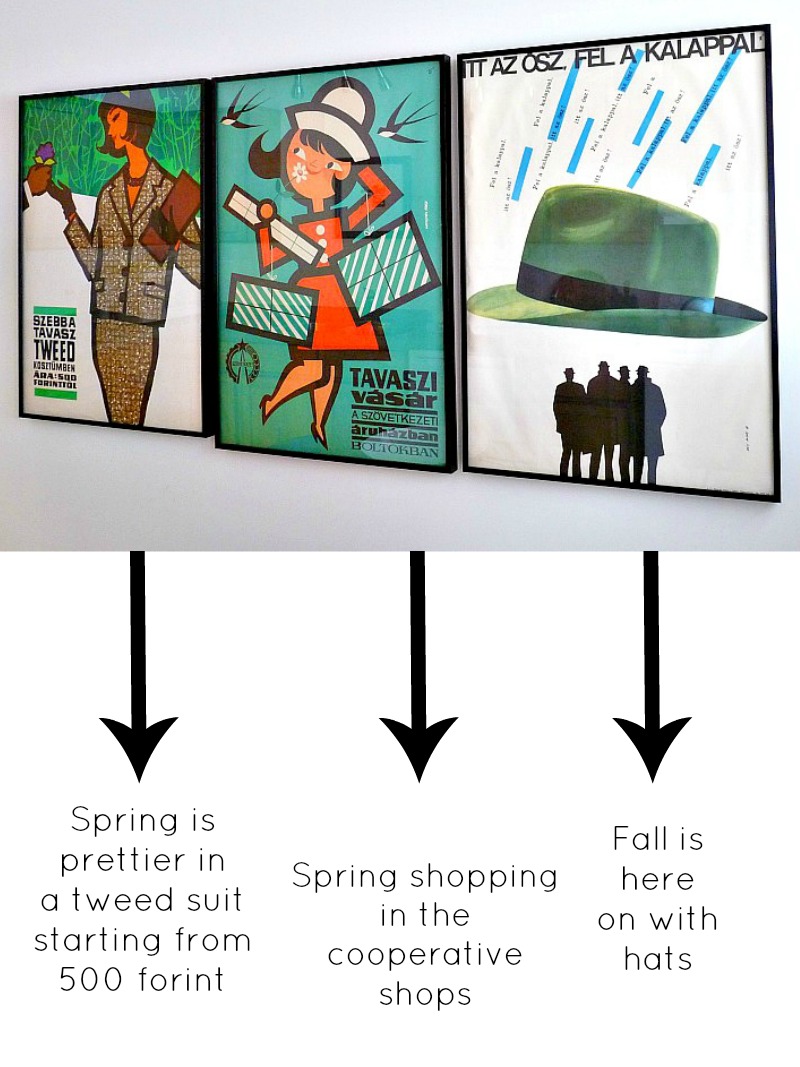