I am really excited about what Hubby and I worked on over the long weekend.  Have you noticed that you rarely see ceilings in the townhouse tour?  This is why: 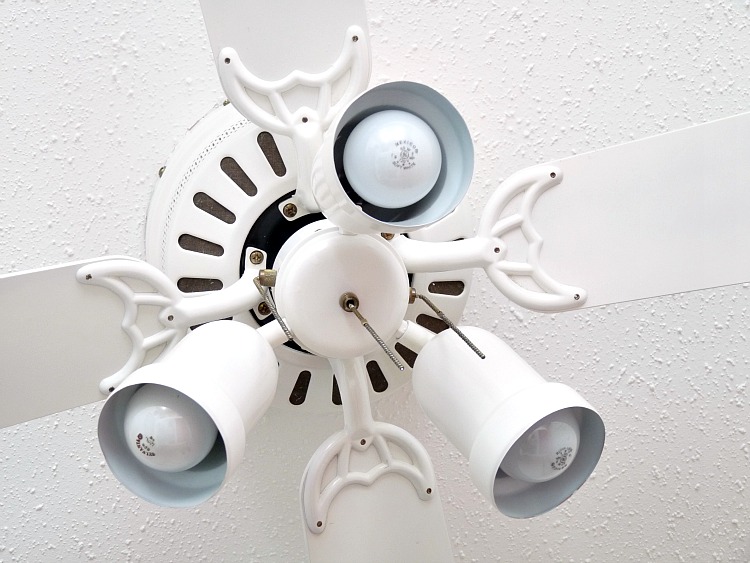 Yep.  We’ve got some big, bad ceiling fans in all three rooms upstairs.

Wait one minute.  Are you thinking they aren’t so bad?  Trust me: they look much better in photos.  In real life they are scuffed (How?? What on earth can touch them up there?), and just plain big and beefy.  Also, the naked bulbs I used to see first thing every morning seemed to glare at me, all wonky lookin’. 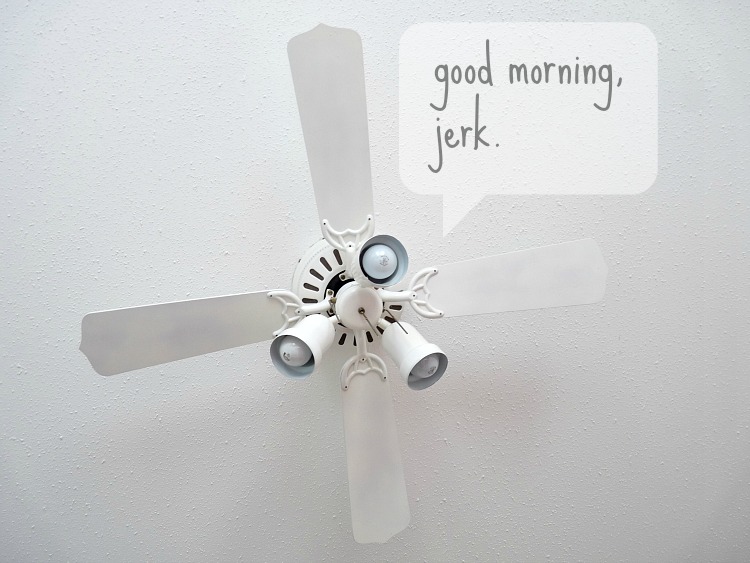 Have I shown you the salmon pink one?  I rest my case. 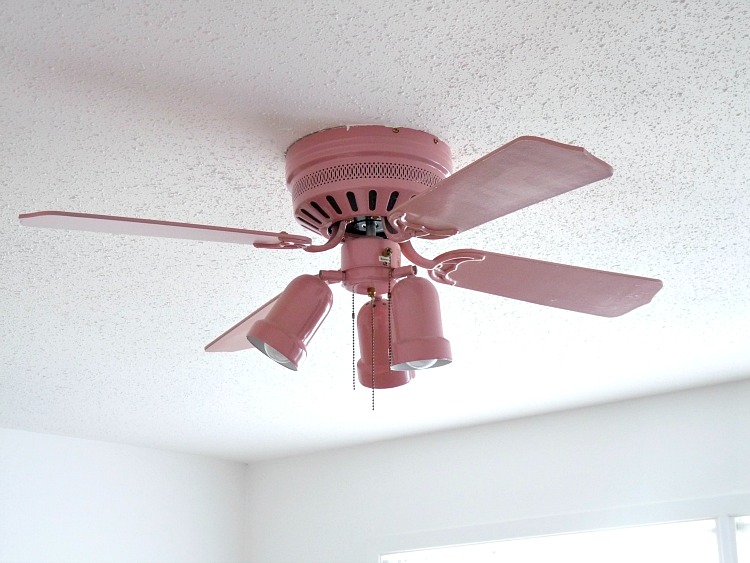 Before you get all excited, fantasizing about the gorgeous light fixtures you think we installed, you have to know something about us: we are one of those weird ceiling fan families we used to mock on Trading Spaces.  You know the ones: when the designers took away their ceiling fans they would walk off set in a huff, but still have their mics on so you could hear them sobbing in the background.

Hubs and I both grew up in Northwestern Ontario.  It’s colder there.  Neither Hubs nor I ever lived in a home with air conditioning.  We relished the limited number of toasty summer days we got.  Ottawa, on the other hand, can be so damn humid that we stick to the sofa, our desk chairs, our clothes, and all but wither and die during the steamiest weeks in August.  The townhouse has no forced air, so that means no AC.  Plus, even when we open the windows we have less air circulation than detached homes.  Ceiling fans have become our friends.  We especially love the one over the treadmill (even if it is freaky to run inches under the whooshing blades).

Long story short, ceiling fans were here to to stay (I’m sorry), but we looked casually for nicer ones.  For three years, we only found ones that were either a lateral move . . . 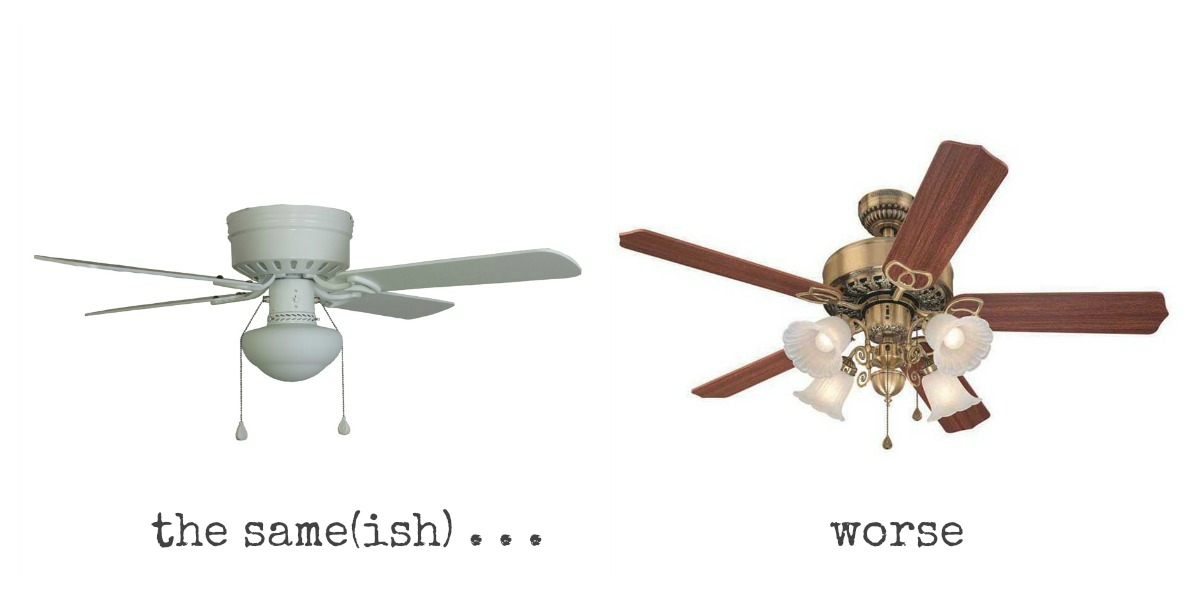 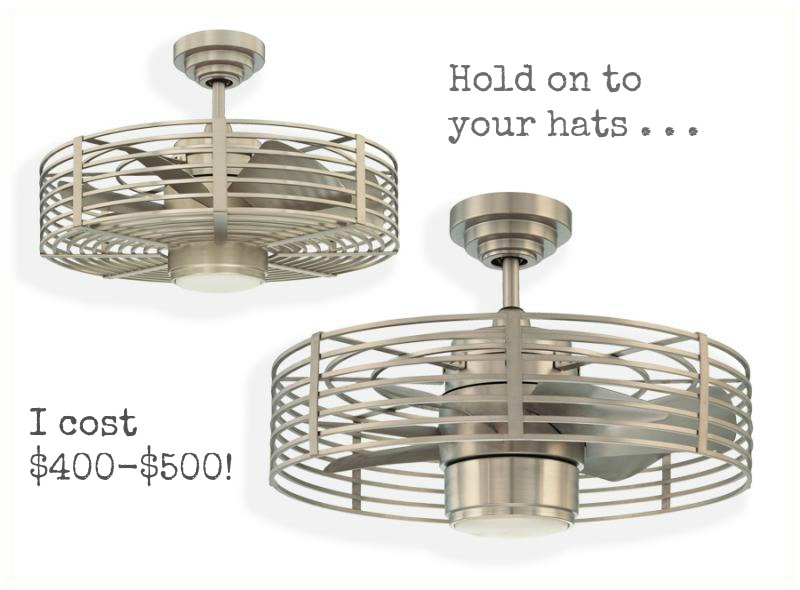 We finally struck gold last week when we found a simple, modern style in brushed silver, on sale for $219.  We also scored an extra 5% off because I asked nicely.  I have been feeling a little antsy about spending that amount of cash, but look: 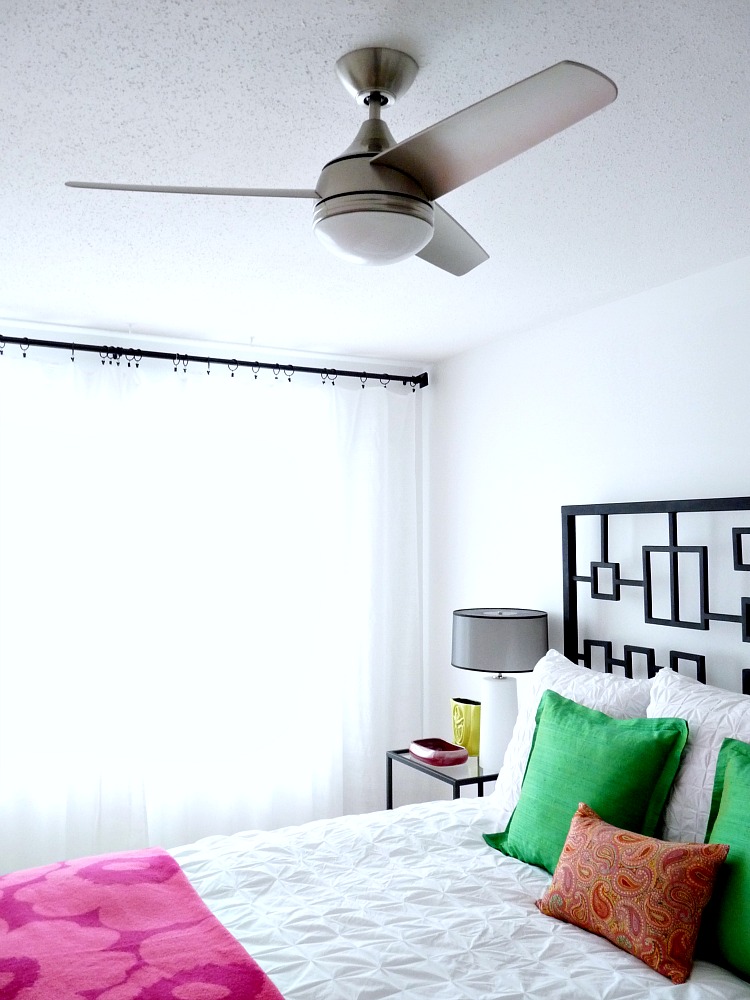 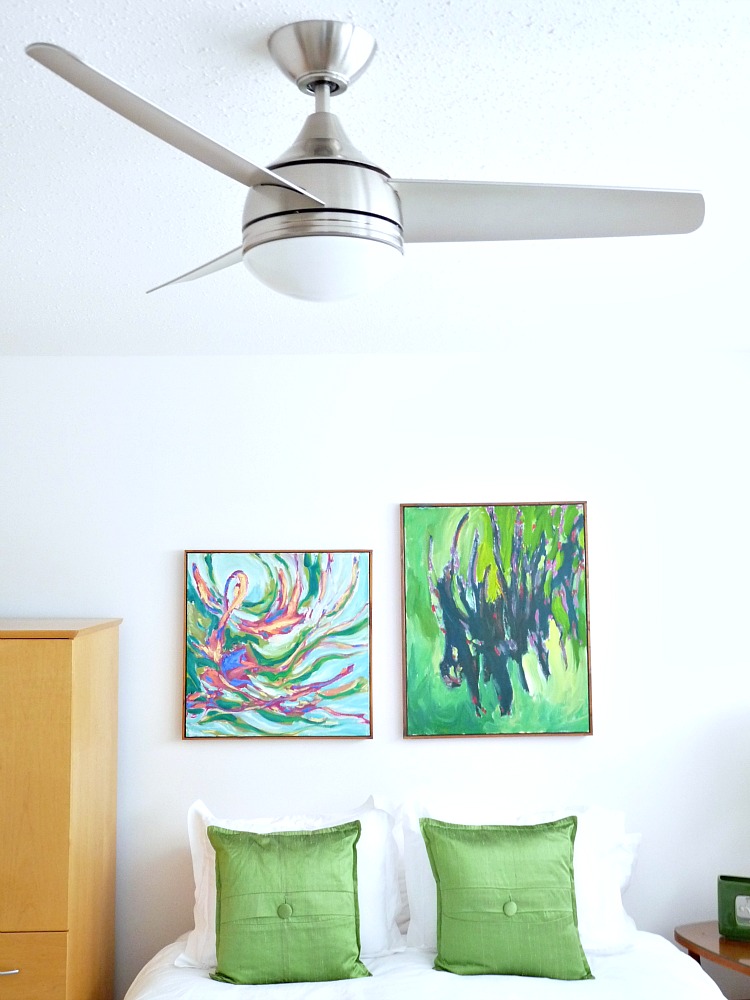 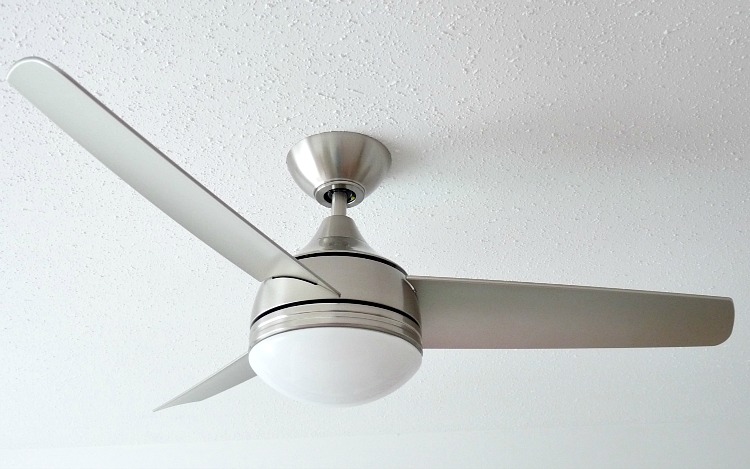 So pretty.  This newer model also does a much better job of circulating the air AND the light is less jarring – it even has a dimmer option.

The best part is, each fan controlled by a detachable remote (it replaced the light switch) that I can pluck off the wall, set on the nightstand and then change the speed or turn off the light from the comfort of bed!!  To make me sound less lazy, I can also turn it on while running on the treadmill without missing a beat.  I heart this gadgety feature. 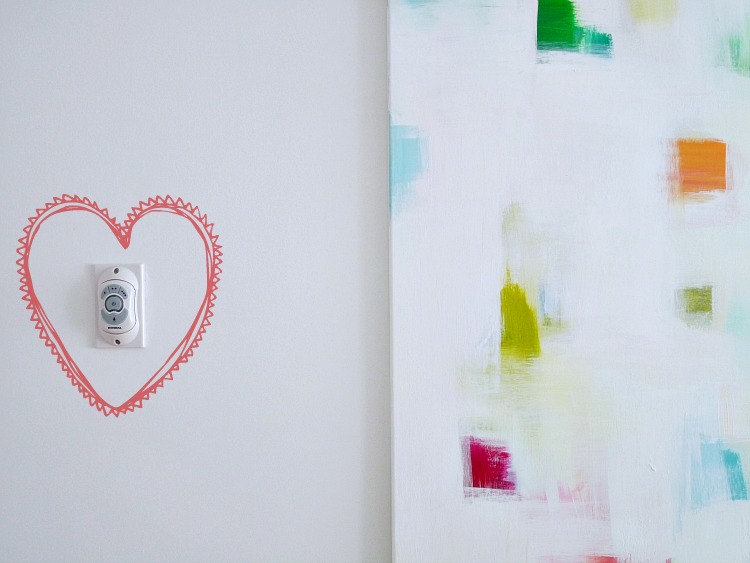 Installation took longer than we thought (about two hours per fixture), but Hubby was a super star at figuring out the instructions.  There was nothing that stumped us, it was just a lot of fussy work and holding heavy things (over our heads) – multiplied by three!  We were also delayed by having to touch up the ceiling because the base of the old fan was much larger and so parts of the ceiling hadn’t been painted the crisp white we drenched the house in.  Two generous coats, applied with a mini foam roller, did the trick! 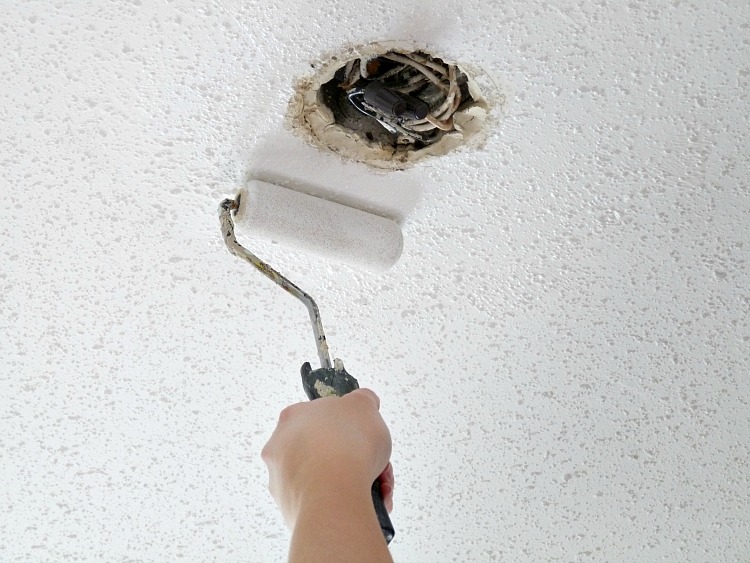 Now I can finally show you our ceilings.  All three bedrooms have the same style fan, for a unified look.  I’m so happy.  We didn’t lose any function, we won’t sweat like pigs in the summer, and each of the three bedrooms is a smidge prettier and more modern.  Just don’t talk about the popcorn. 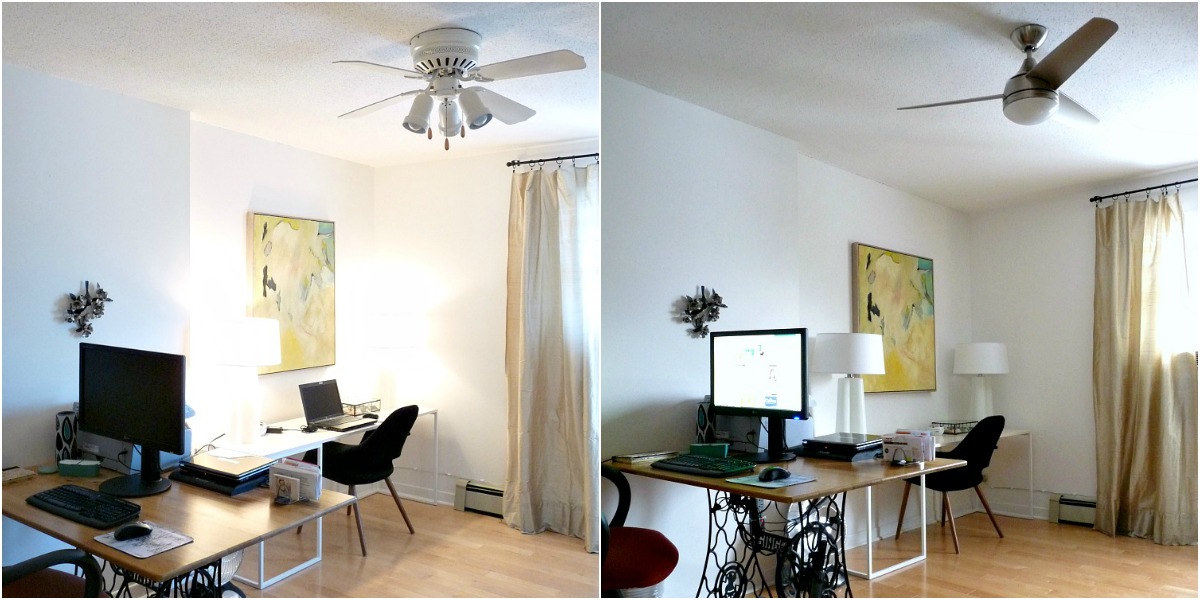 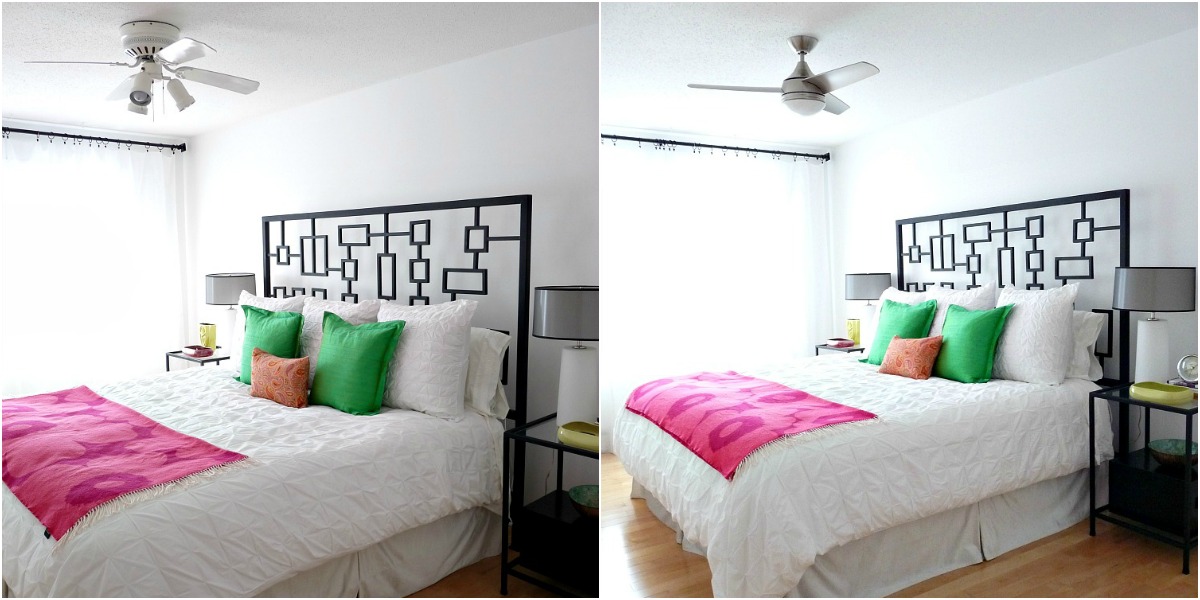 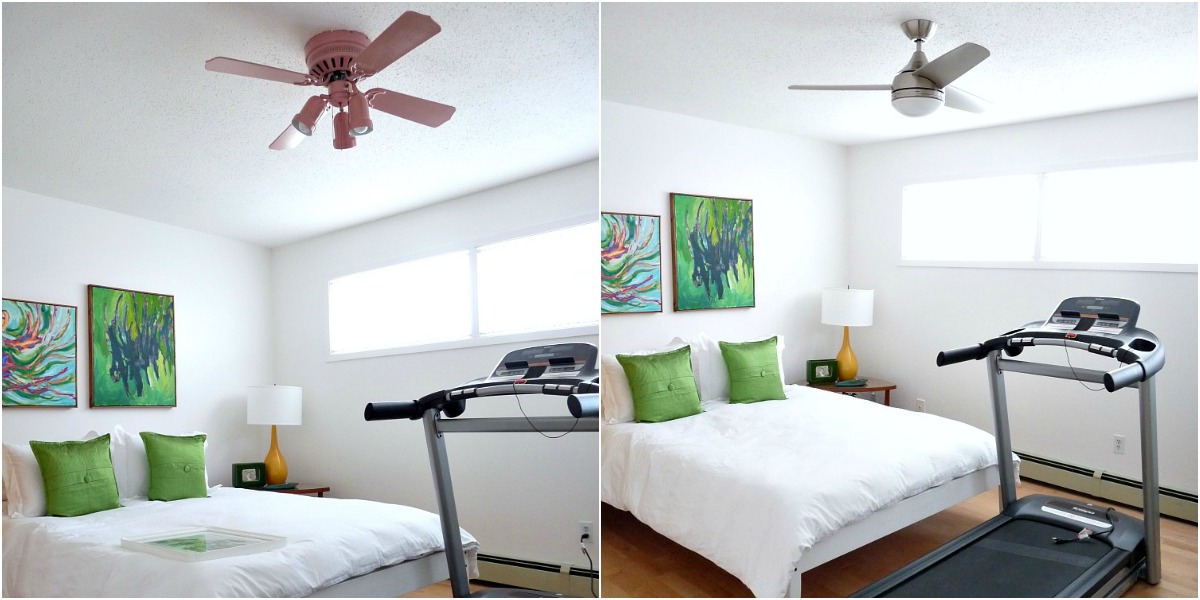 Apologies for not hiding the treadmill.  I kept it real with these photos – no tidying!  We’ve been trying really hard to stick to using the treadmill, and it’s not the easiest thing to put away.  I fear that if we put it in the closet, for even a second, we’ll never use it again!