I am so excited about the DIY agate home decor project I’m sharing today: easy DIY agate art.  This framed agate art is so easy to make – it’s almost as easy as my last agate craft project:  the super simple DIY agate slice pendants I made. 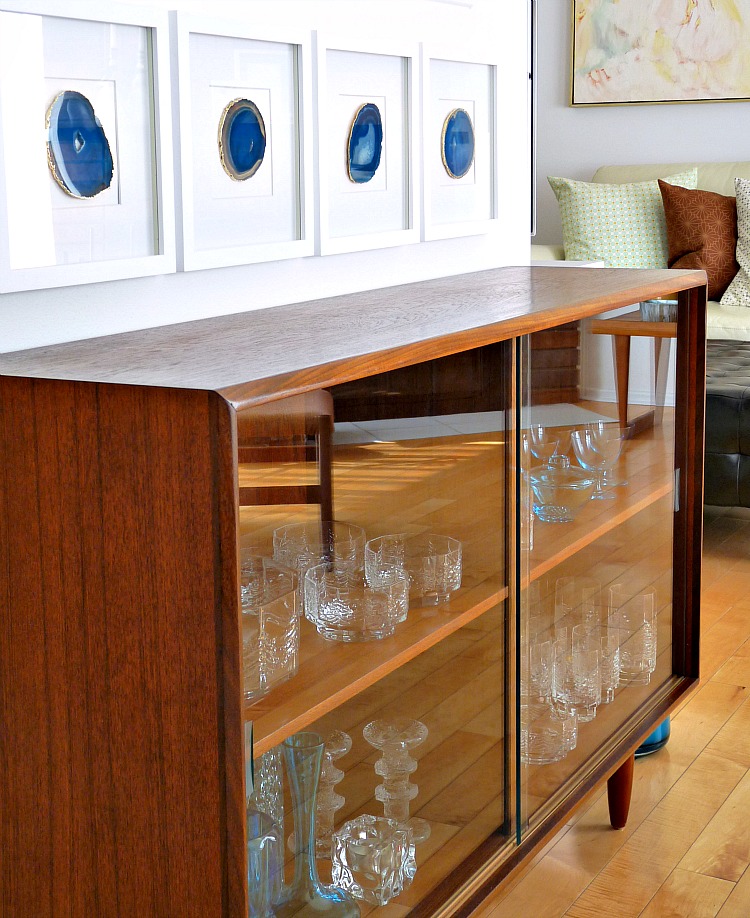 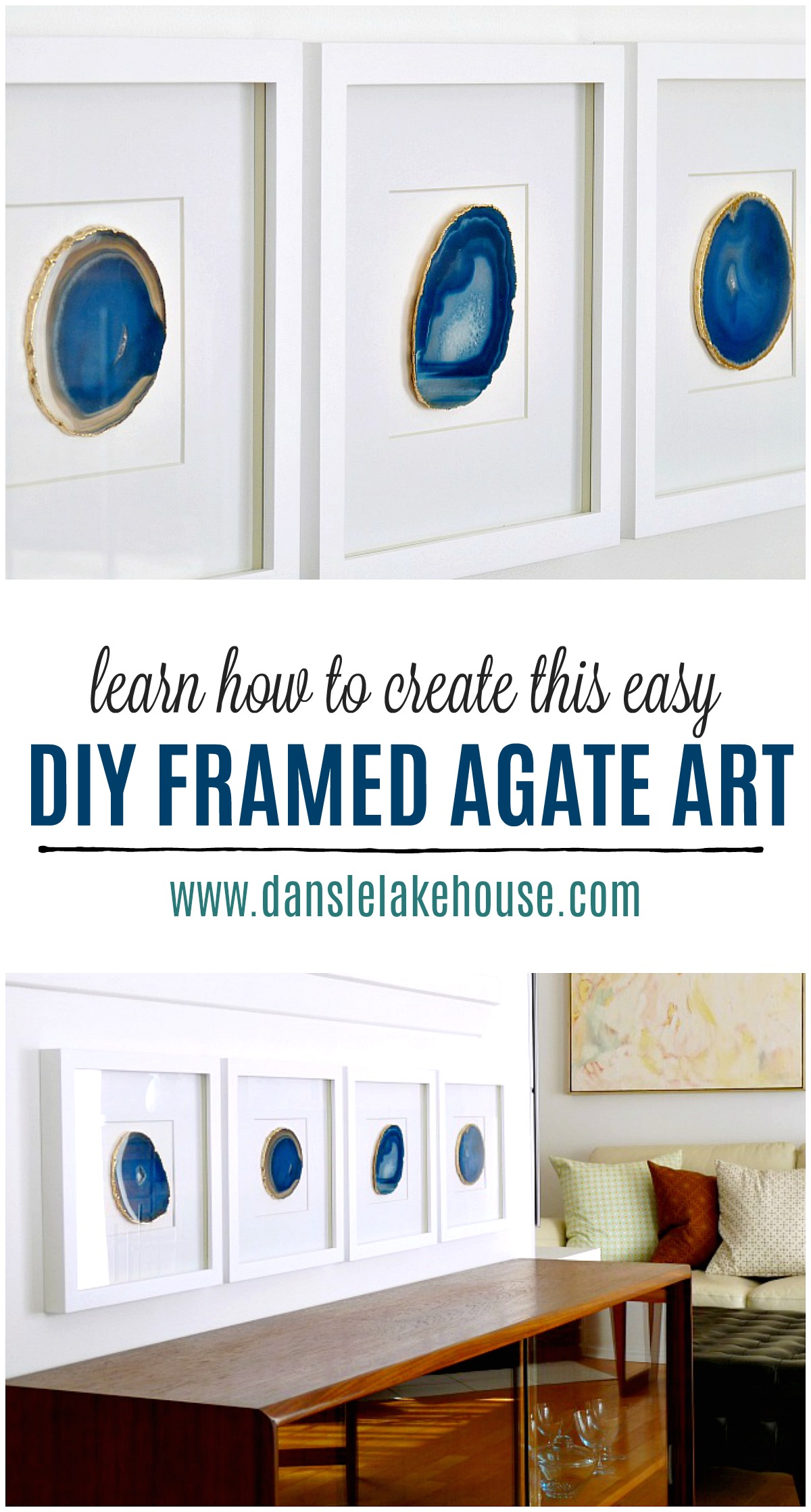 You already know I loooove rocks:  I have one of many childhood rock collections on display (okay, technically two) and I’m always looking for ways to add rocks, gems, minerals – anything glittering, really – to my home decor.  I recently mooned over some ridiculously expensive framed agate art but it was far beyond the reach of my home decor budget, so I patiently waited for the right agate slices to cross my path so I could make my own budget-friendly DIY agate art – for a fraction of the price!  Recently I was shopping for a friend’s bedroom makeover and I spotted a gorgeous set of large agate coasters, dyed teal and trimmed in gold, at HomeSense.  The price?  Only $19.99 for the four!  I really regret not buying the second set of agate slice coasters HomeSense had (a moody grey with gold trim), but I was trying to be budget-conscious and thrifty…

At least I scooped up the teal agate slice coasters, because $20 is such a bargain!

With my supplies on had, it only took a few simple steps to whip up this easy DIY agate art – bumping the agate slice pendants out of top spot for my favorite DIY agate slice craft project! This DIY agate is really a super simple art project, but the secret is in the supplies.

I’m a huge fan of LePage Gel Epoxy and have used it for a whole host of projects, including my DIY agate pendant necklaces and my DIY tile trivets.  This time we bought the epoxy formula specifically designed for glass, ceramic and stone.  Ask the folks at your local hardware store for their recommendation for the best epoxy or glue to affix agate slices, if you can’t find this: 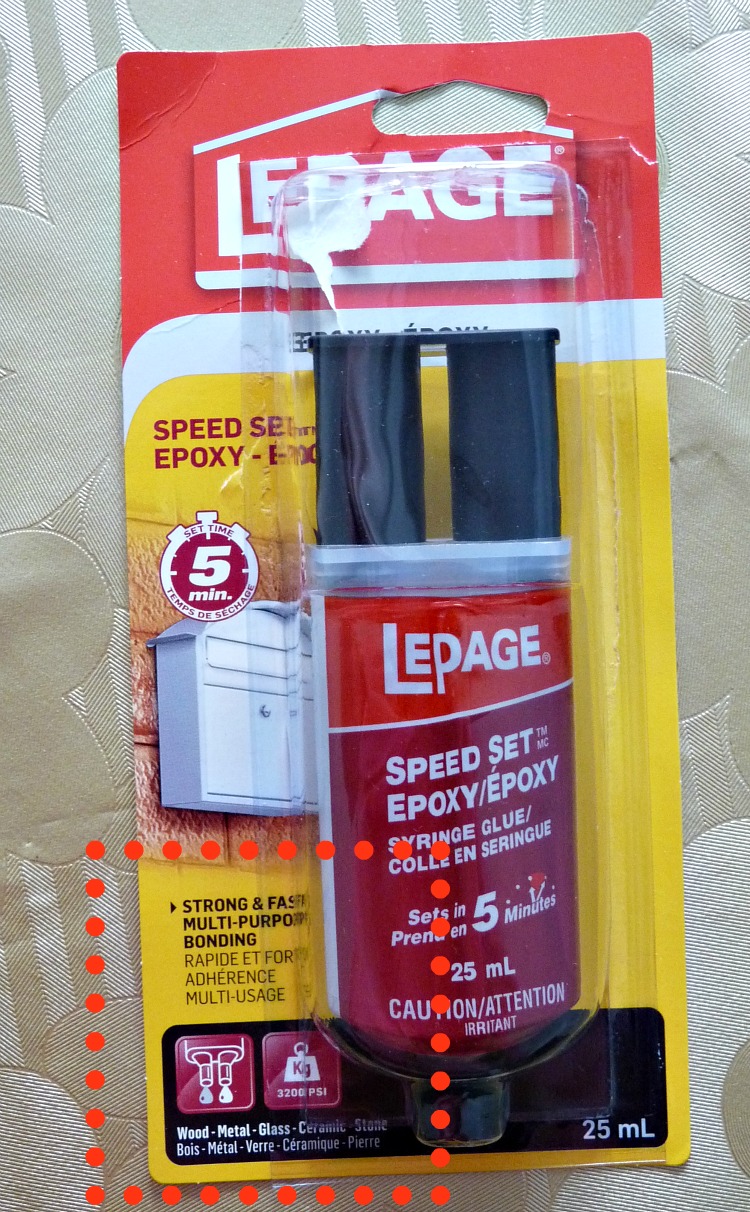 The How to Make DIY Agate Art:

First I created a backing for the agate by gluing two sheets of white cardstock paper together and then to the cardboard backing that came with the frames.  I liked how sturdy the cardboard was, but I wanted the backing to be white.  I kept the glue to the area behind the matting, in case it crinkled or stained the paper.  I added some packing tape to be doubly sure, but I think this was a touch neurotic.  It’s tricky to photograph, but you can see the backing here: 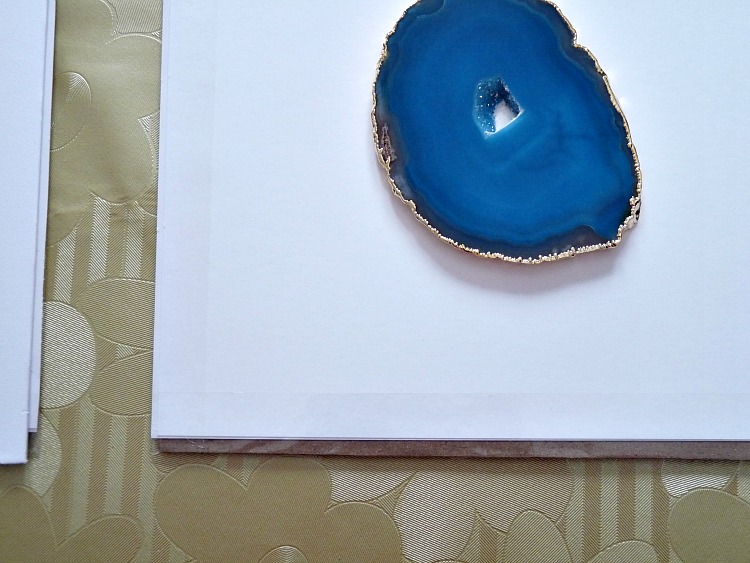 You could also just use something like foam core, and skip this step!

Next I held up the agate slices to a light source to figure out where to apply the epoxy.  Although it dries clear, I wanted to be sure no gobs of glue would be seen through the less opaque sections of the agate. 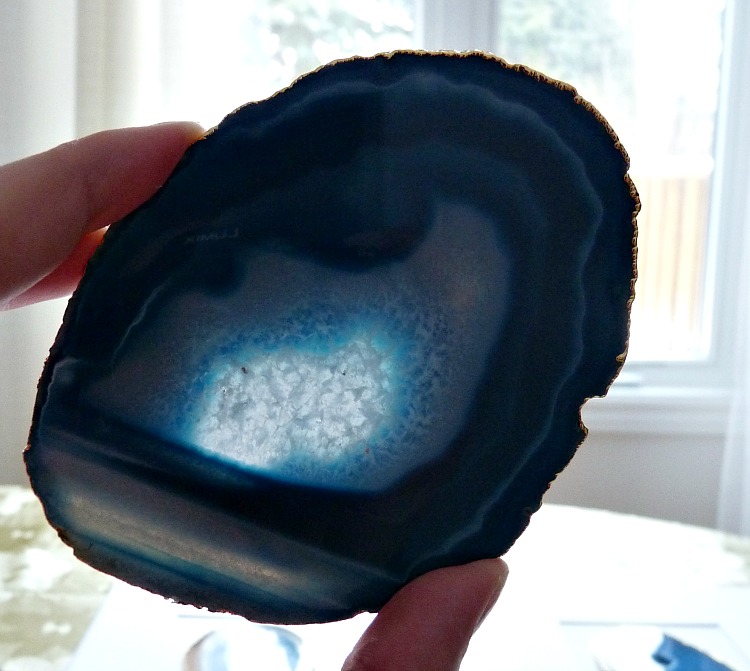 I mixed together the two-part epoxy and applied it with a wooden skewer (a toothpick works too) to the most opaque sections of the agate slice, keeping away from the edge to avoid squishing epoxy out the sides. 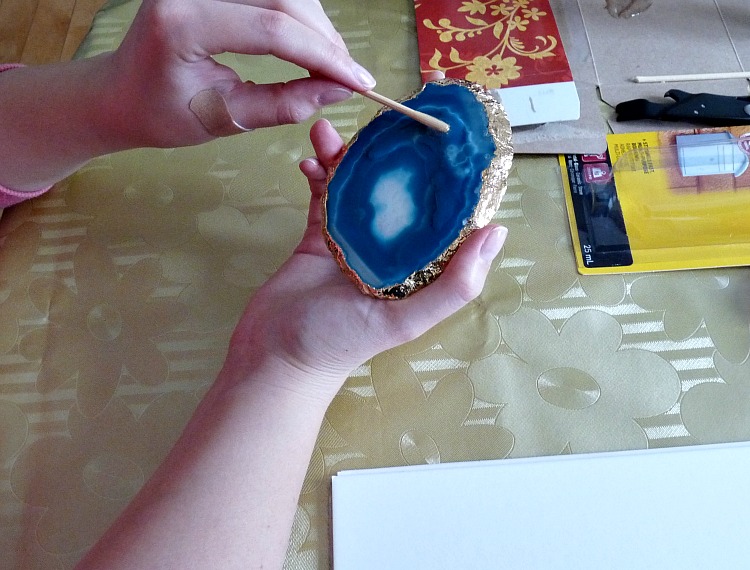 I eyeballed the center of each matting and gently pressed the agate in place, wiggling it a little. 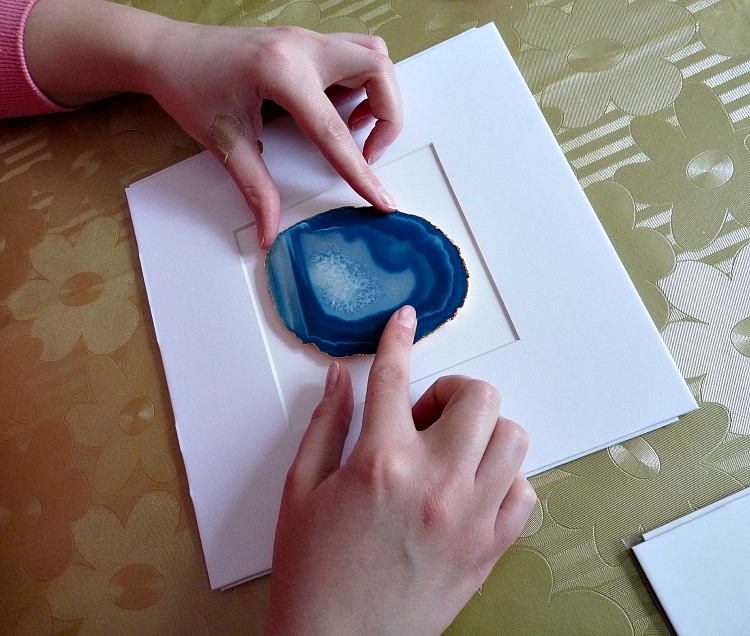 I very patiently waited a whole 48 hours before hanging my new DIY agate art over the new dining room cabinet: 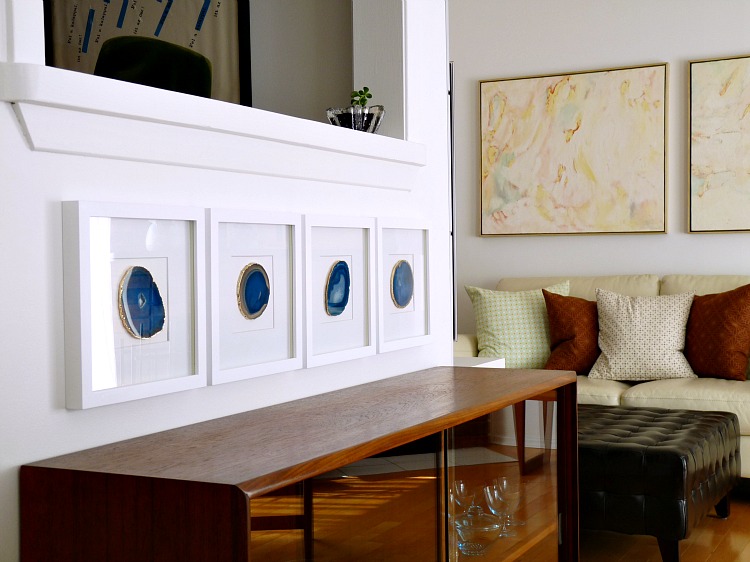 I want to keep the surface of the cabinet clear, for use during dinner, but it needed…something.  The quirky placement of the agate art below the pass through, and at eye level when folks are sitting, means they can be admired during dinner and they also add some character (and purpose) to the new furniture, creating a sweet little vignette and making the dining room decor seem more thoughtful and intentional. 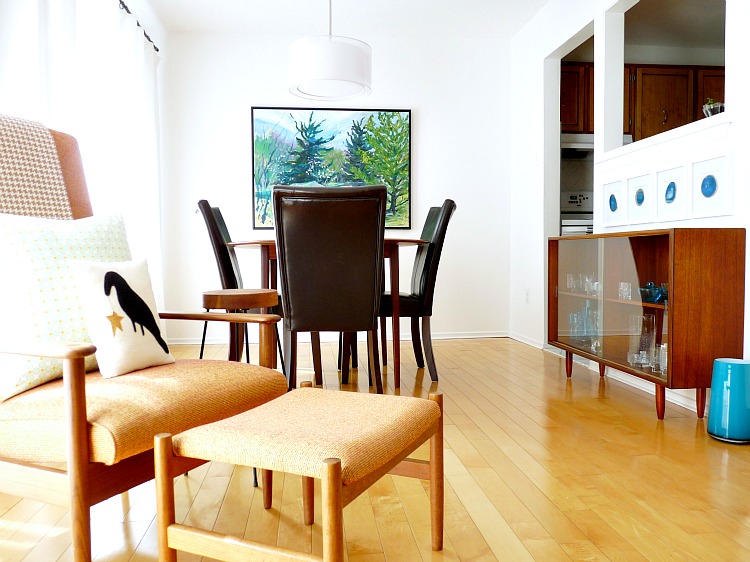 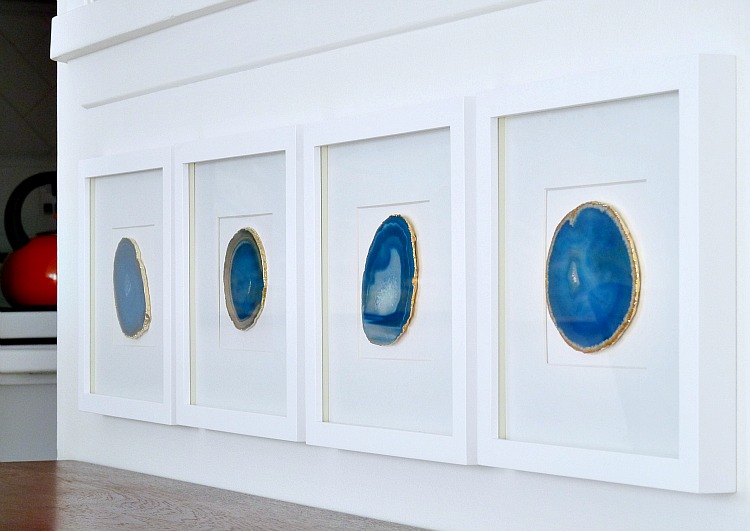 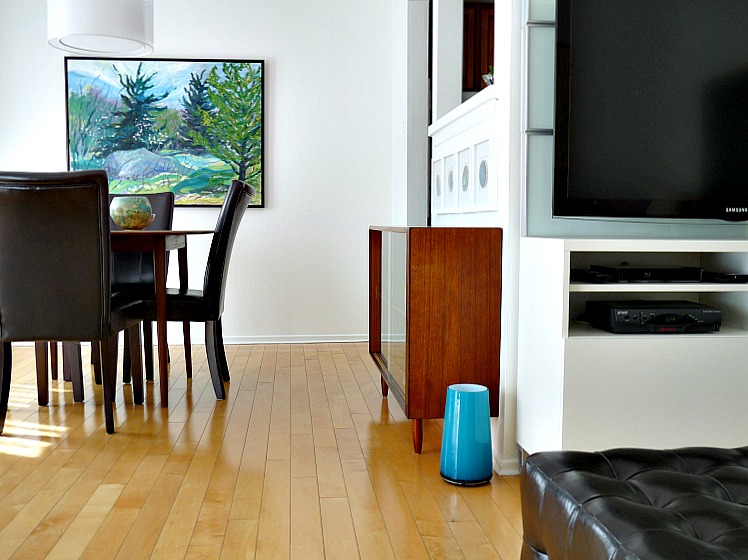 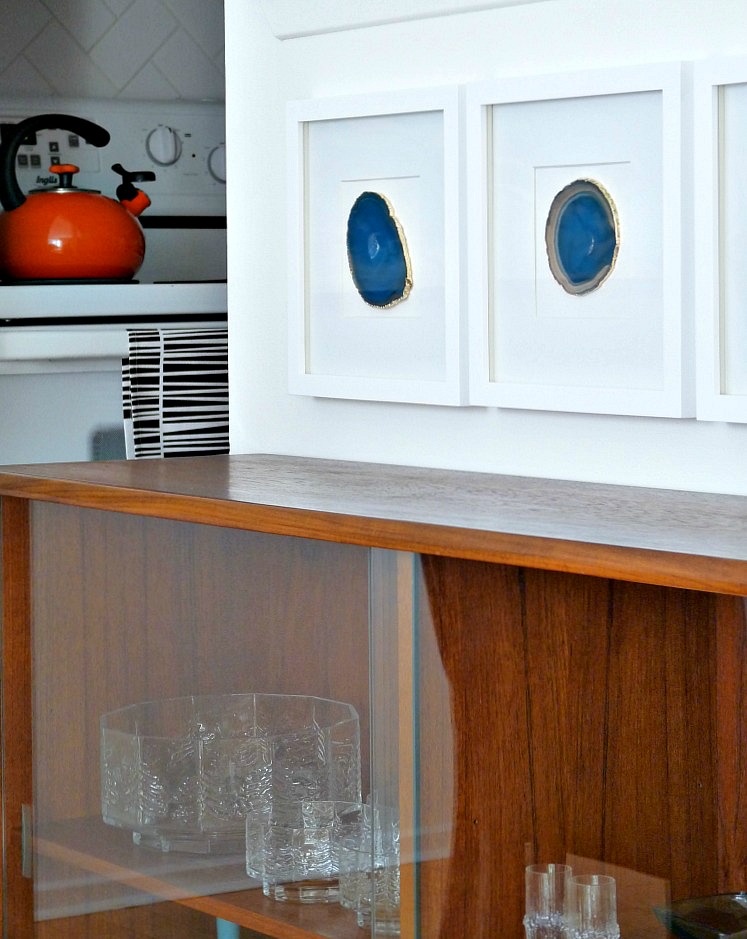 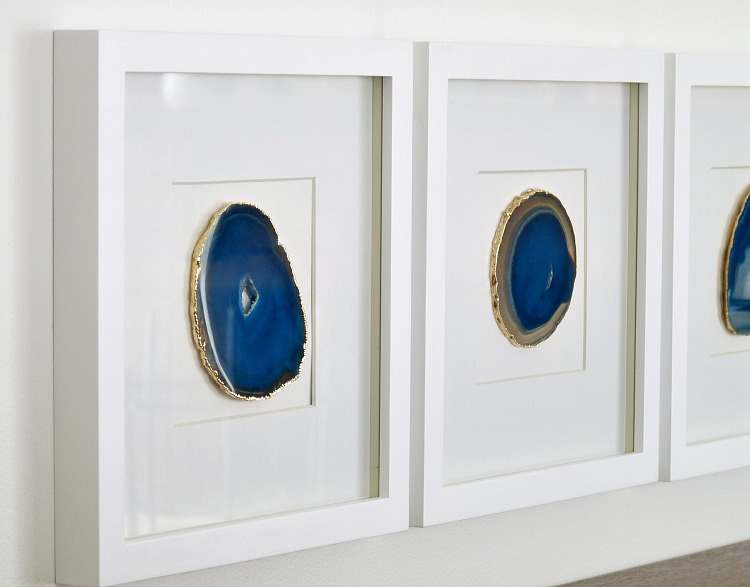 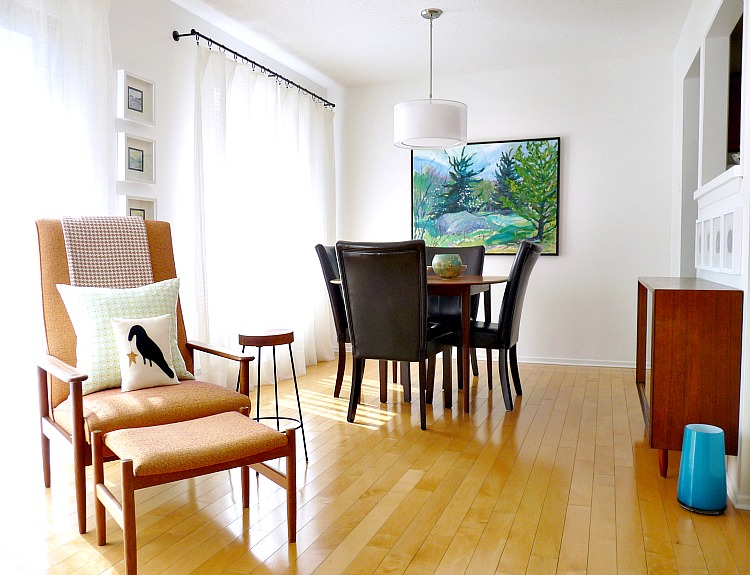 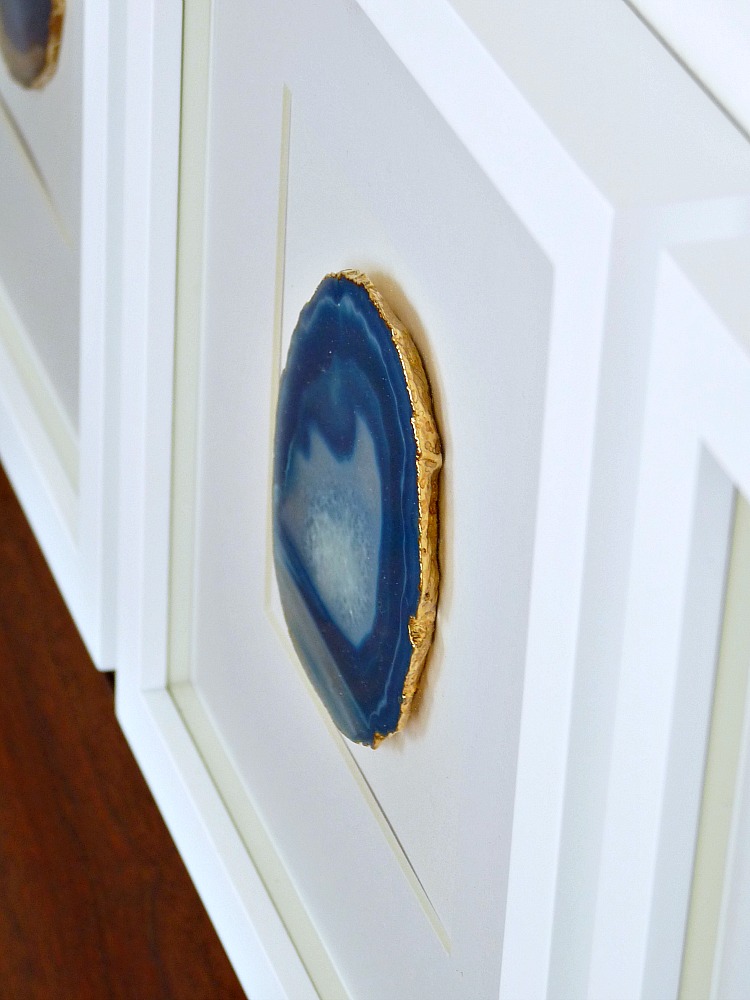 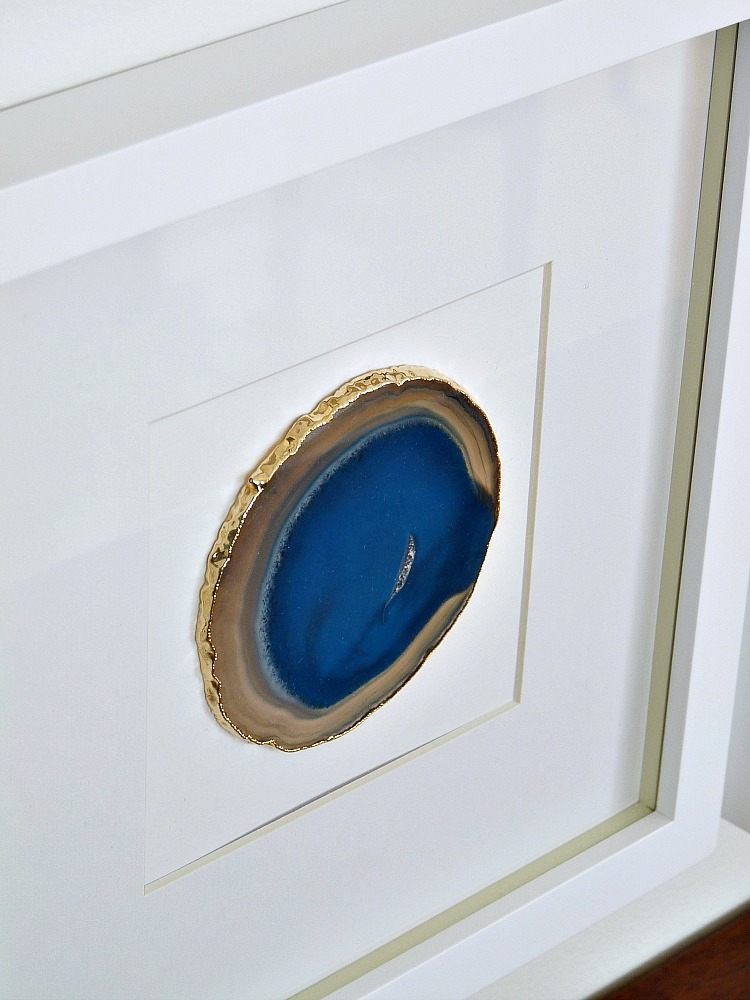 The frames from Pottery Barn are really good quality.  These frames really fool people into believing I bought these agates framed – and didn’t make this myself!  I absolutely low how the framed agate art turned out – and the deep teal and swirling design reminds me of Lake Superior.  Over the years, with the addition of the new dining room painting, framed enamel art, mid-century cabinet, Shane Norrie pottery and now the framed agate slices, the dining room has become such a fun and lively space, with lots of character and personal touches. 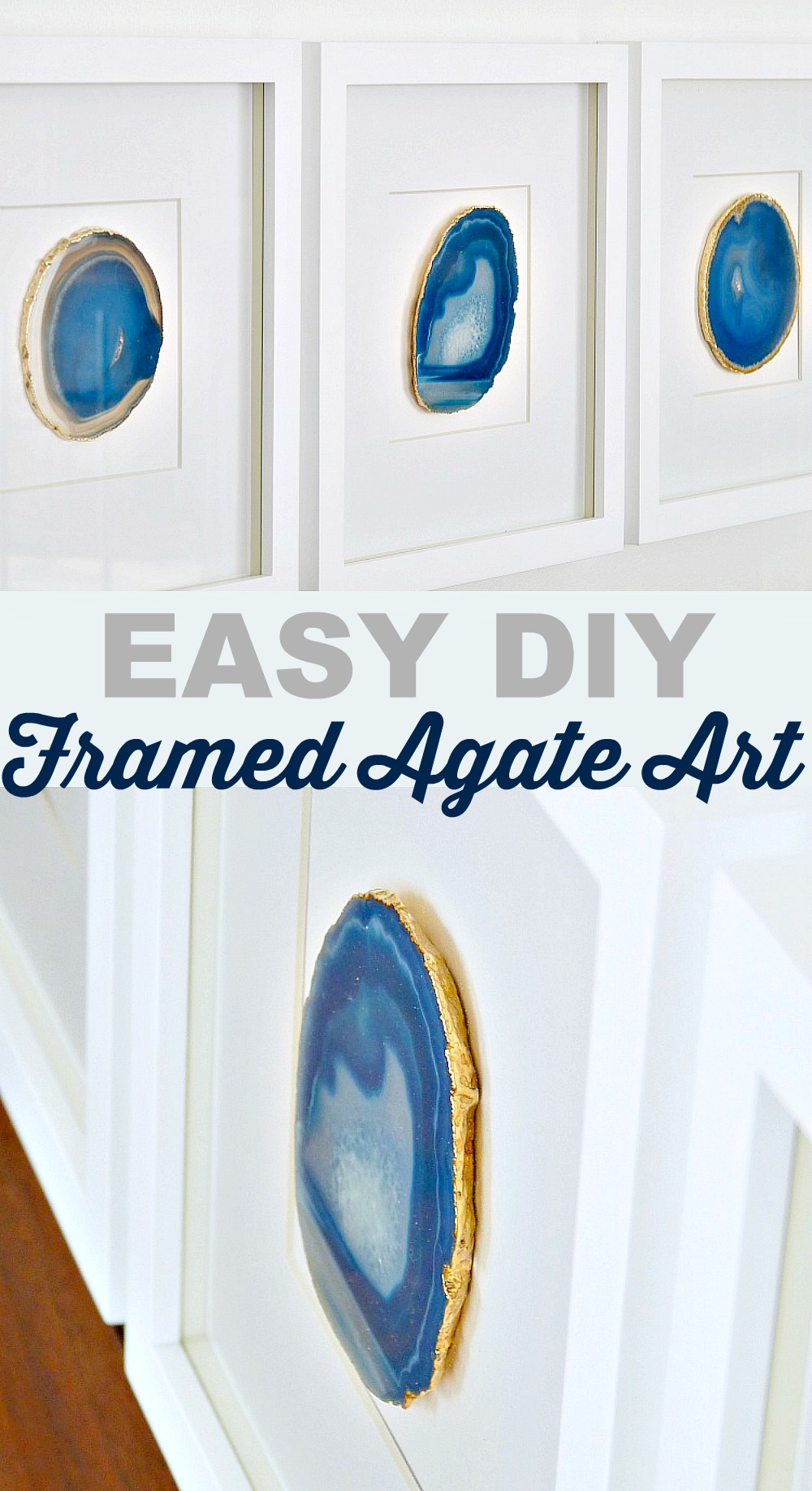 Love the look?  These agate slices from Amazon look very similar to the ones I used, but I also rounded up some other sources below.  I personally purchased from the Hollow Geode, linked below, for another DIY agate craft (my DIY agate wreath) and I highly recommend the shop! 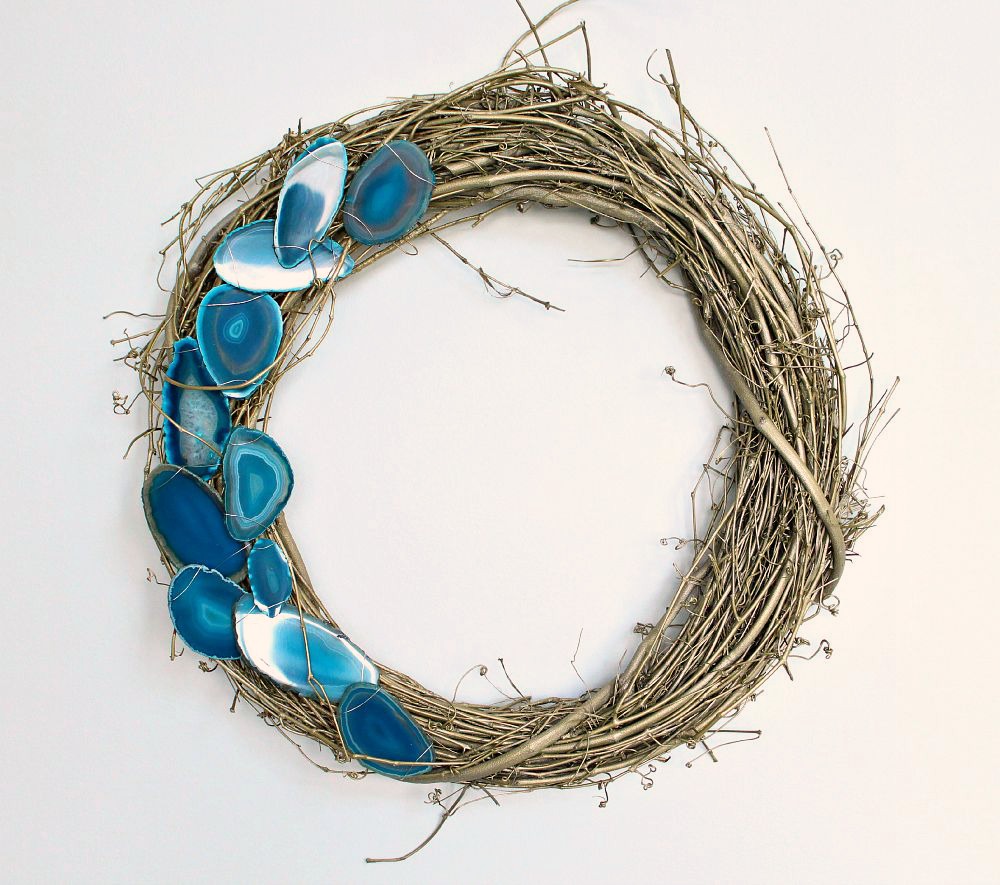 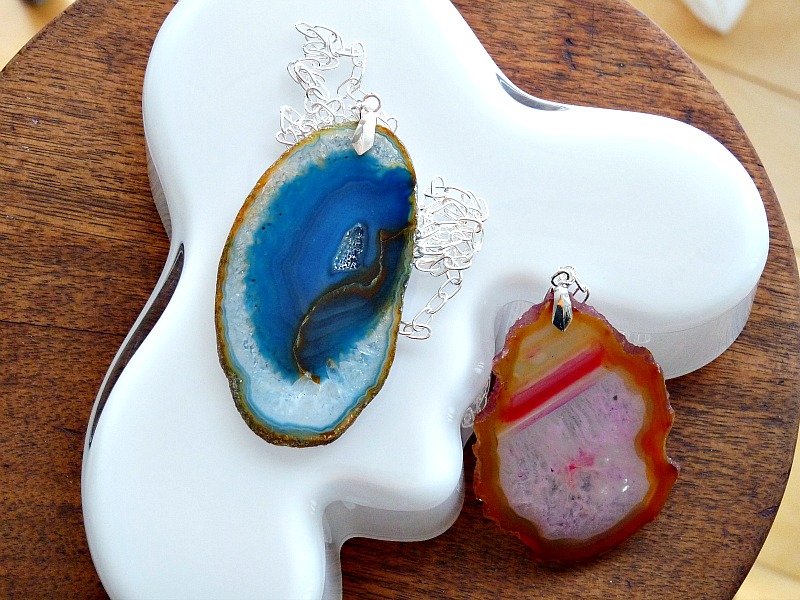 Disclosure. The four frames for this DIY agate project are courtesy of Pottery Barn, but I wasn’t asked or encouraged to write a favorable review.  I’m actually thinking of ordering another set of four white gallery frames to replace my framed enamel artwork and elevate that sentimental art with better quality frames.