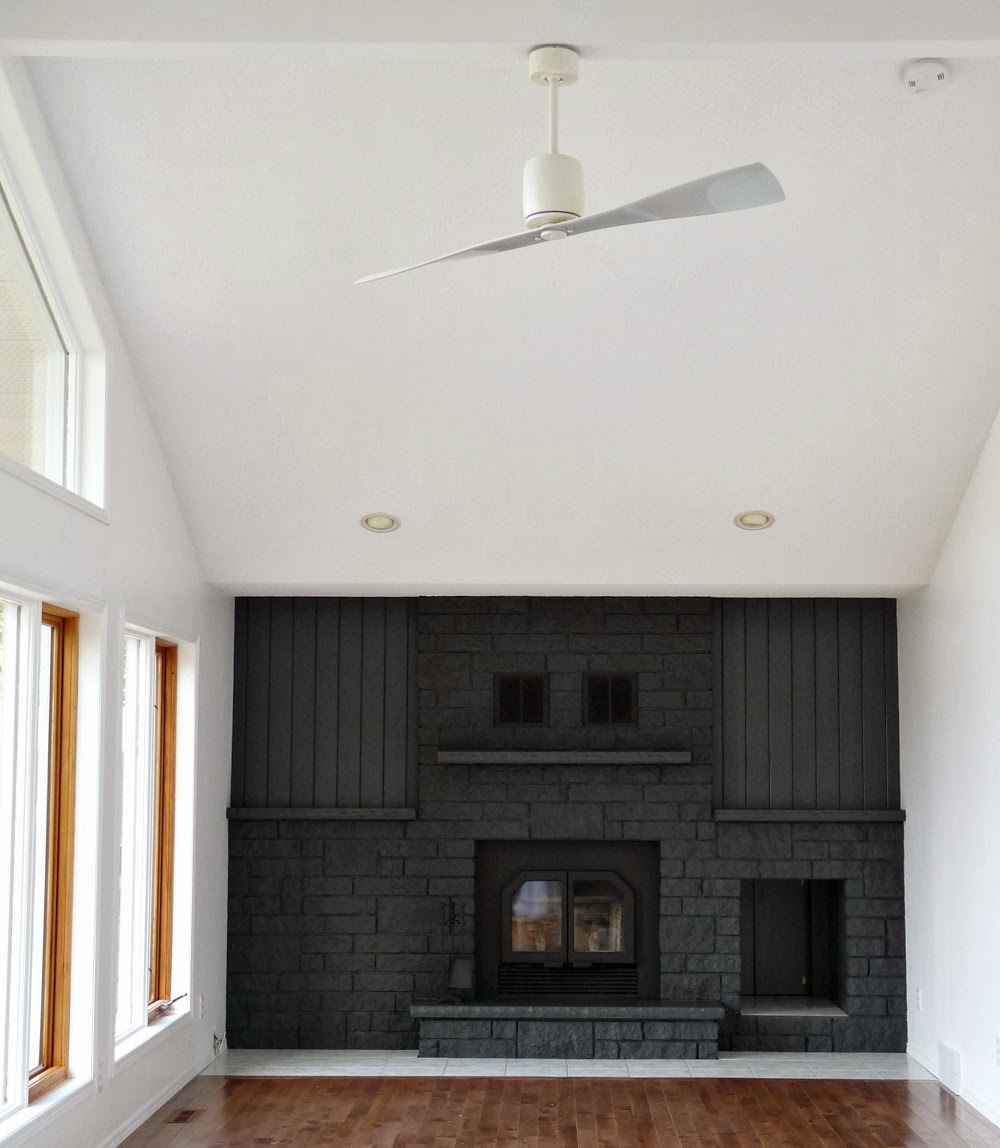 With the fireplace painted a deep charcoal grey, and the walls and ceiling a crisp white, the woodsy beam and gold-trimmed ceiling fan were next on the chopping block.  My Mandelbaum Mom upped the ante, challenging her fear of heights and spending hours on the scaffolding, carefully applying wood filler, then sanding, priming and painting the beam in preparation for a shiny new ceiling fan. 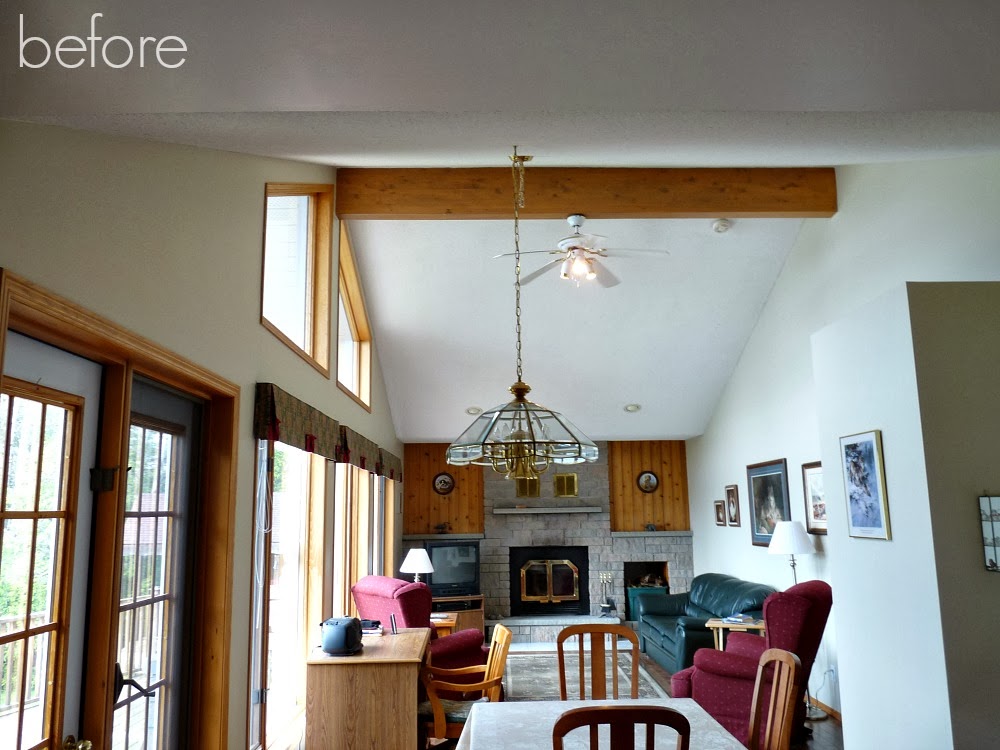 I actually considered leaving the wood (or staining it a different colour), but once the white paint crept up the walls, the wood really stood out and actually made our tall ceiling seem really low. 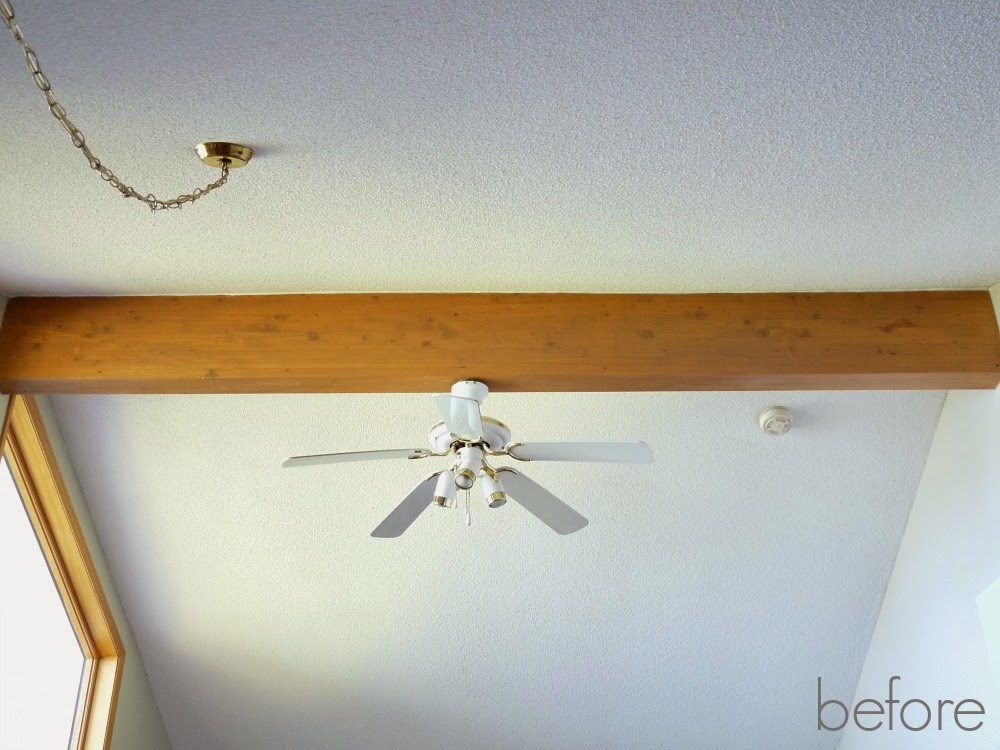 Even once I decided to paint it white, I originally opted to leave the knots, hoping for a fresh textured look.  Disappointingly, the knots pretty much disappeared under the paint except for a few cracks that looked like bugs from a distance. 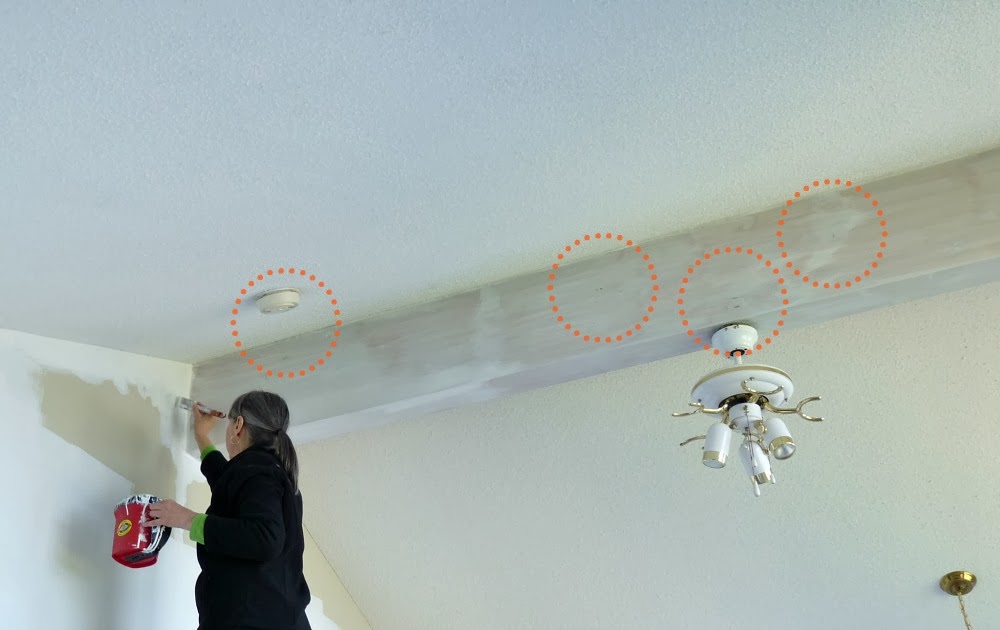 With sweaty palms, my Mom filled in the cracks with wood filler
(essentially undoing her previous priming efforts), then sanded and
primed each knot again.  I (so conveniently) aggravated a back injury
while this was being done, which is why I wasn’t Mandelbauming
it myself, but even once it healed she still soldiered on, applying
three coats of paint with a mini roller for a perfectly smooth finish.

With the beam white, the glitzy gold ceiling fan, with it’s wobbly light bulbs, also had to go. 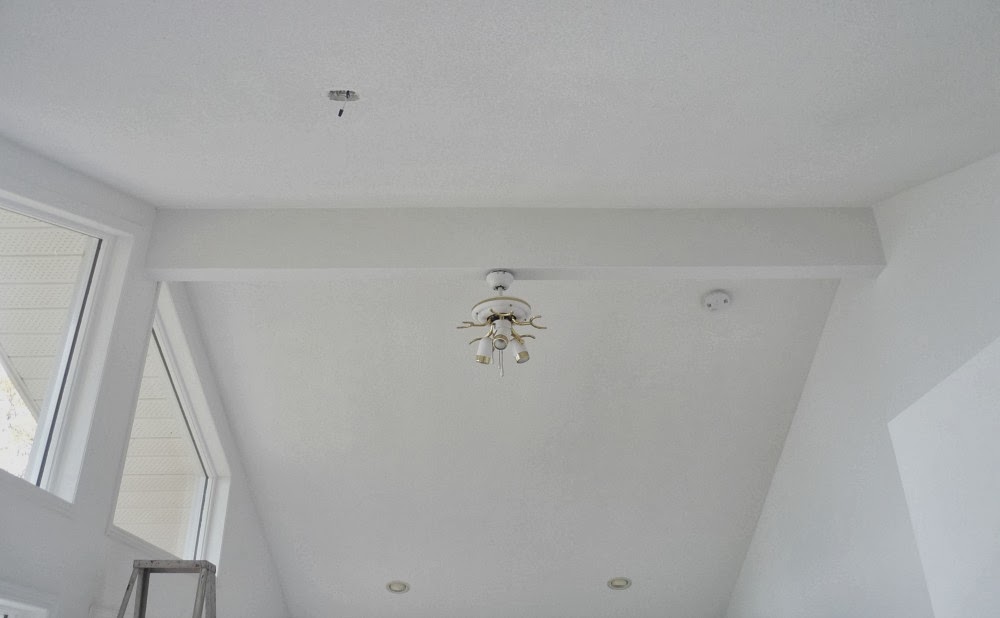 While we still had scaffolding in our hot little hands (making installation a snap), we splurged on a new ceiling fan and I’m happy to report I’m two-for-two finding ceiling fans I actually like. 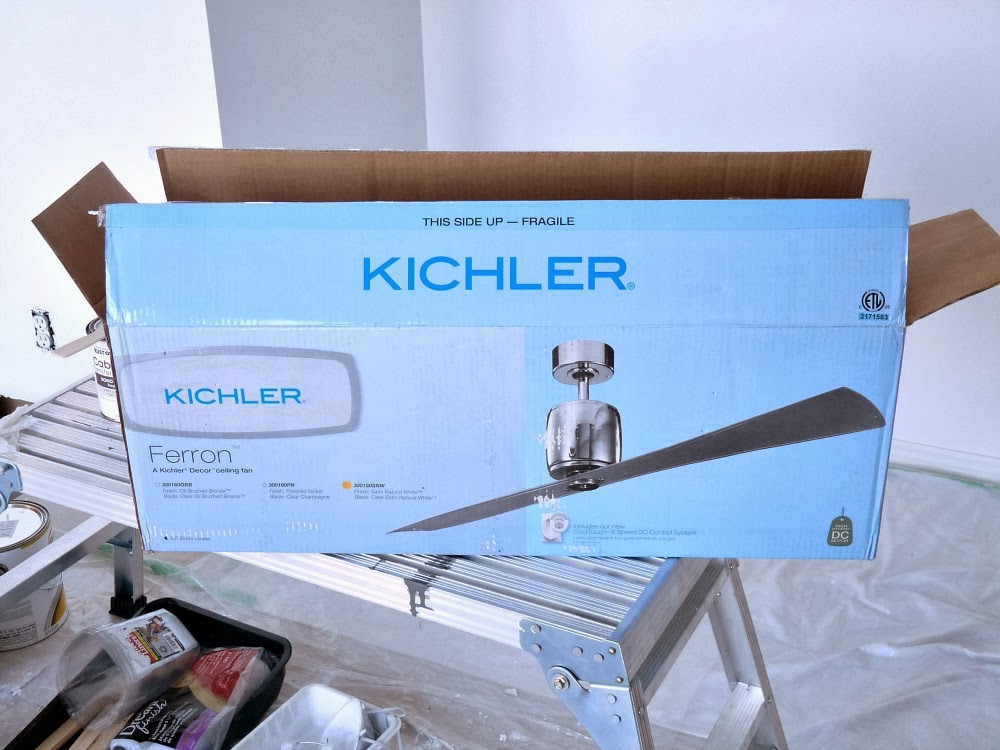 I’ve always liked the idea of a white ceiling fan, but white can be a tricky finish because sometimes I find it looks really cheap – especially the blades.  When I found the Kichler Ferron ceiling fan, with luminescent blades instead of plain melamine ones, I was sold. 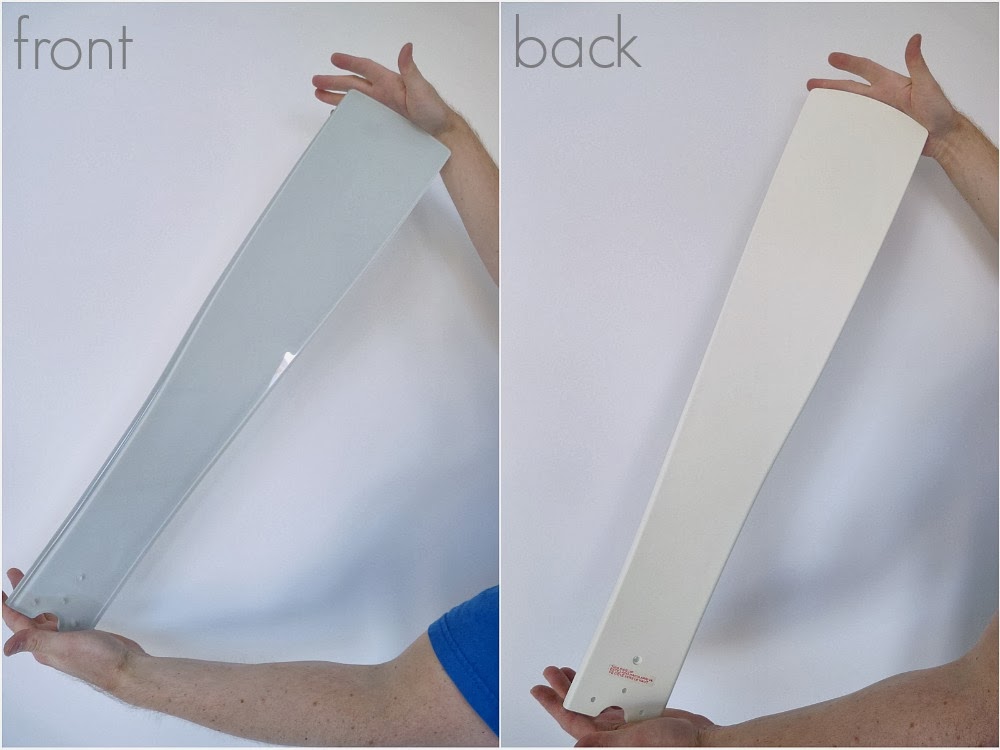 They catch the light really nicely.  No, dreamily, I want to say dreamily.

It also comes in an oil rubbed bronze and brushed nickel – both of which are just as modern and stylish.

This model doesn’t have a light kit, which is perfect for us.  It works silently and efficiently, and will do wonders to force warm air back down, so we aren’t heating the 13 foot tall ceiling. 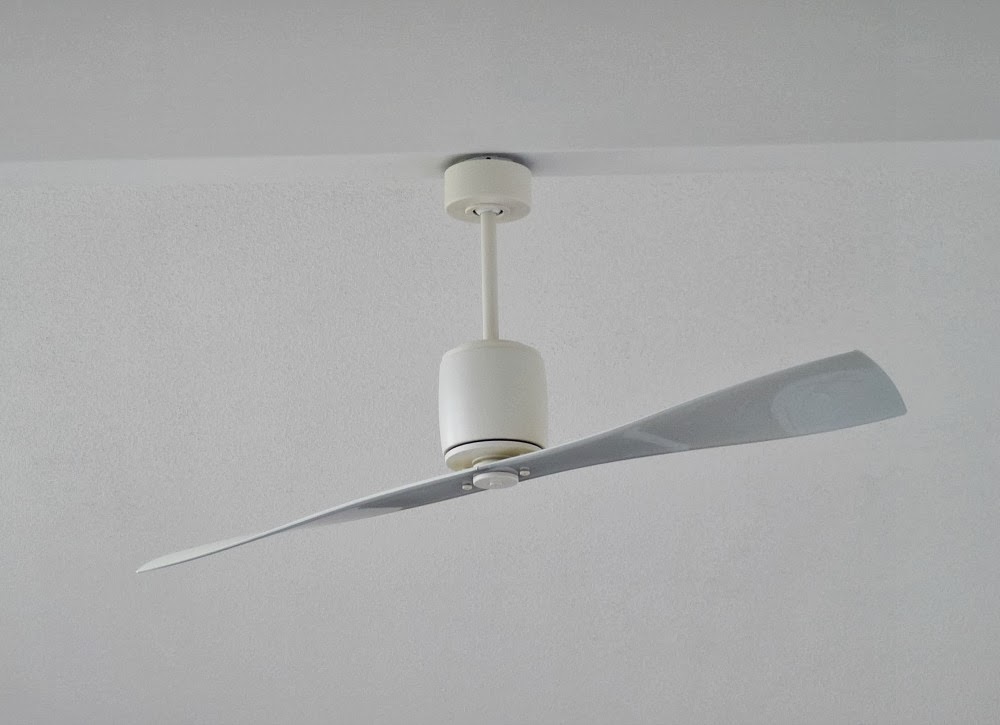 Eventually I want to replace the eyeball pot lights above the fireplace but we’re prioritizing the upgrades.  For now, I’m enjoying the new fan! 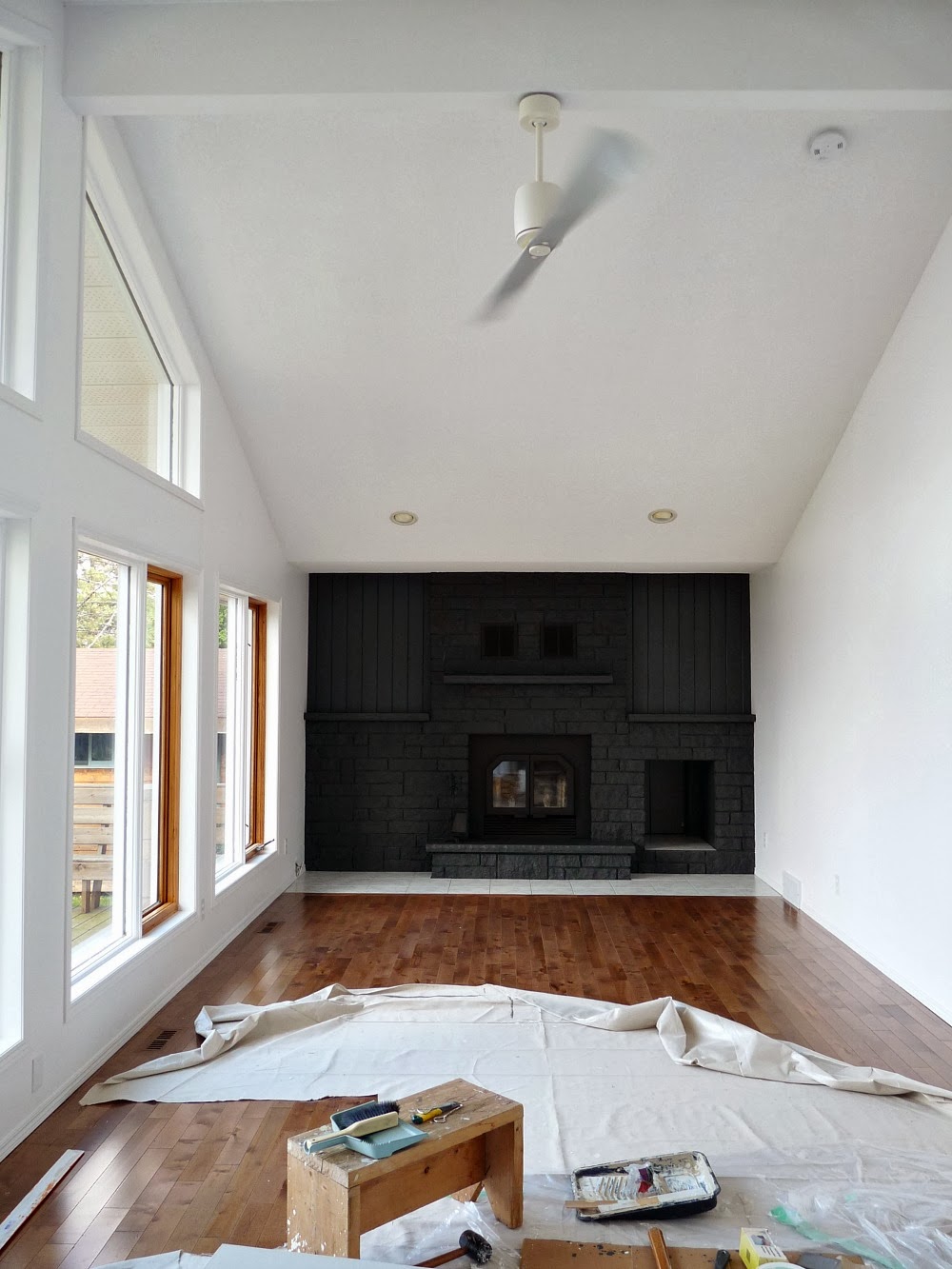