We have not yet moved from our Ottawa townhouse to our lakehouse (long story), so the lakehouse bathroom is empty and in need of accessories, artwork and even basics like soap and towels!  Frankly, I didn’t even have a chance to scrub the floors or shower before snapping some photos of its makeover, but after showing you bits and pieces of its transformation last week, I was eager to show you the whole room.  Because it’s a temporary fix until we renovate, I haven’t actually replaced anything but the ceiling light fixture.  We’ll be installing a new towel bar as well, but otherwise the cabinetry, flooring, counter, tile backsplash, vanity light fixture – even the cabinet hardware – have all been given a simple facelift. 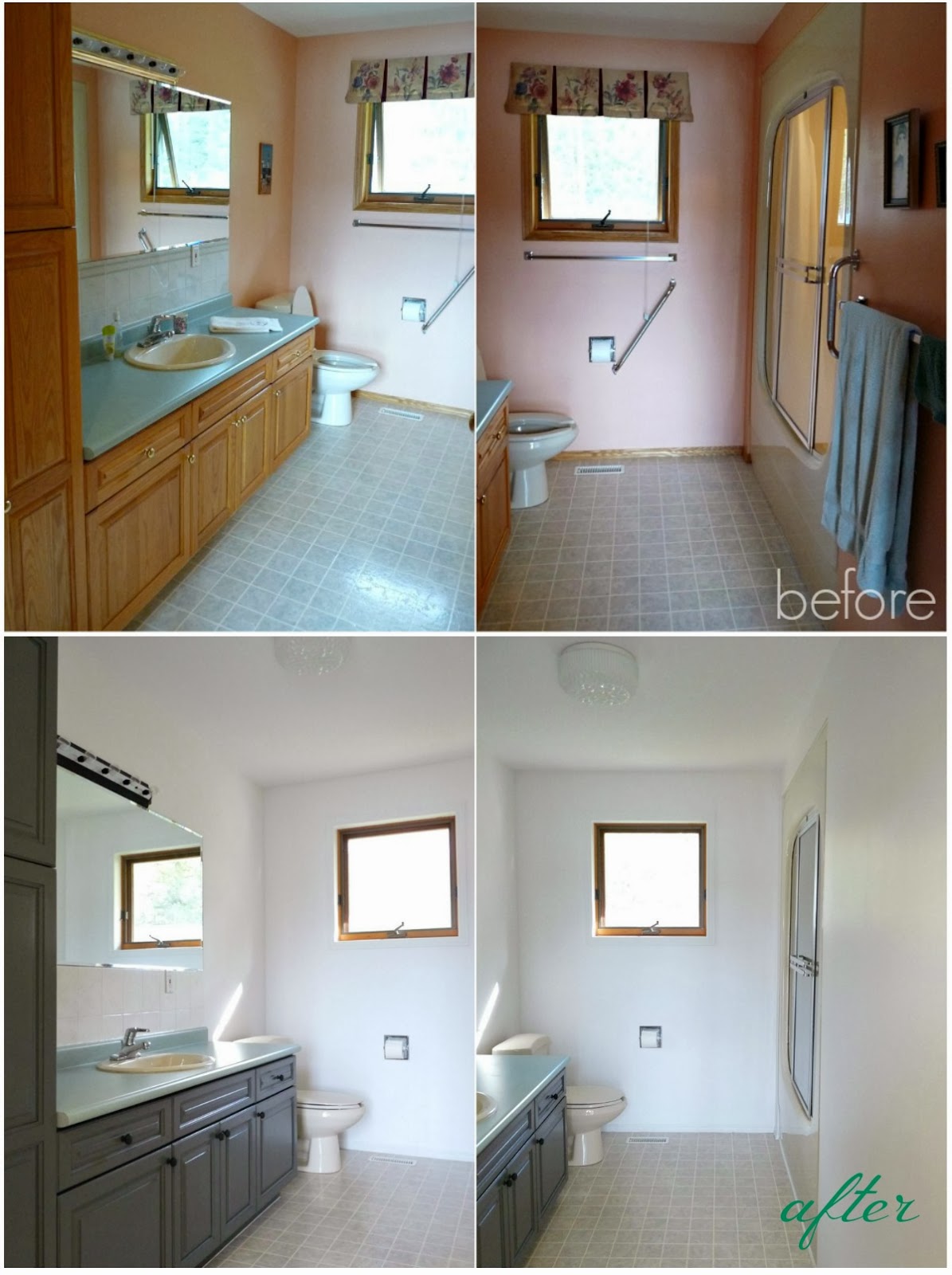 The cabinetry was the first to be updated, with Rustoleum’s Cabinet Transformations System, which you saw a sneak peek of on Friday.  The existing counter is a pale, mint-ish green with flecks of dark grey and creamy-white, so it pairs wells with the cabinetry (which is Rustoleum’s Castle Grey, unglazed). 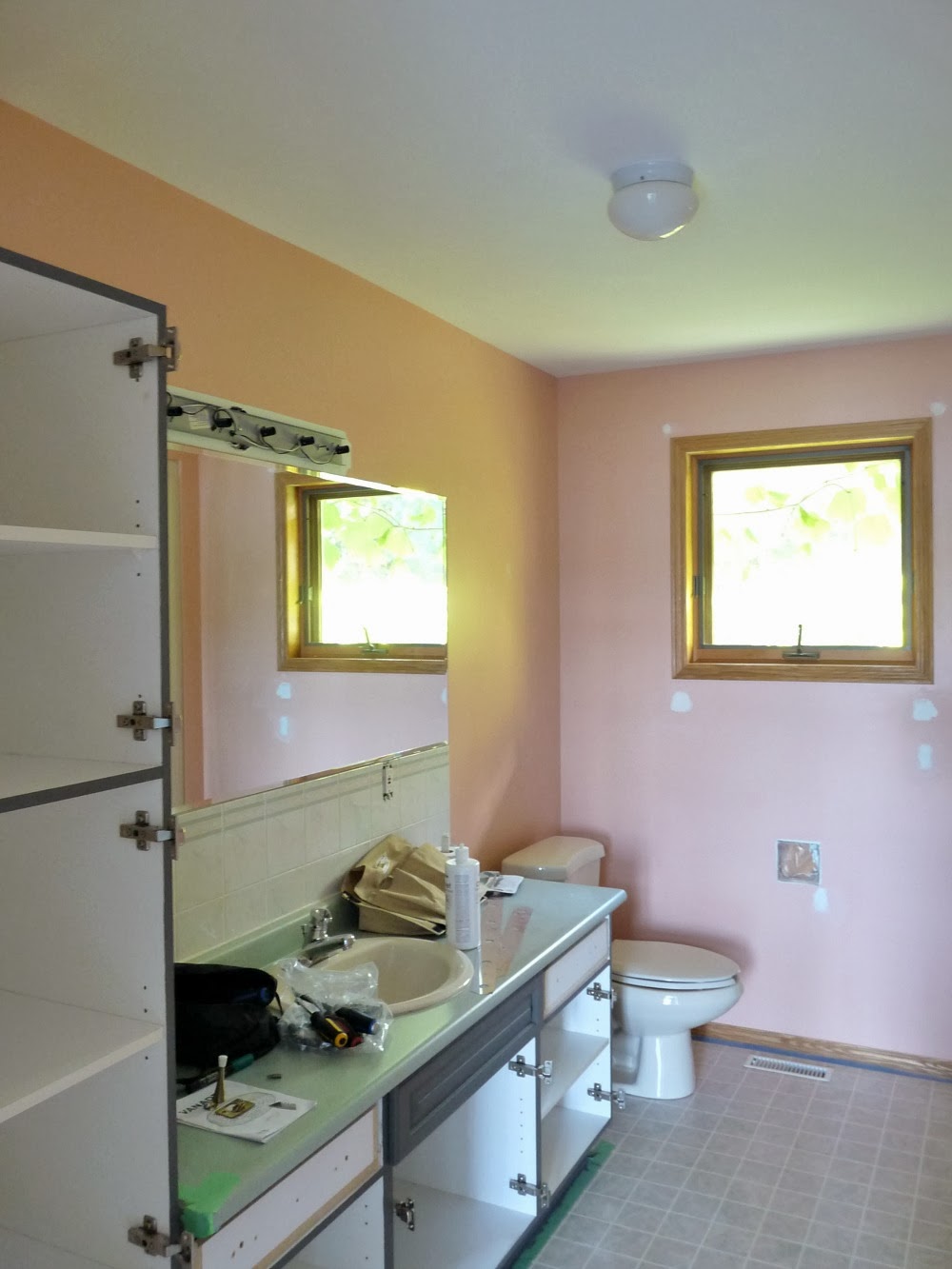 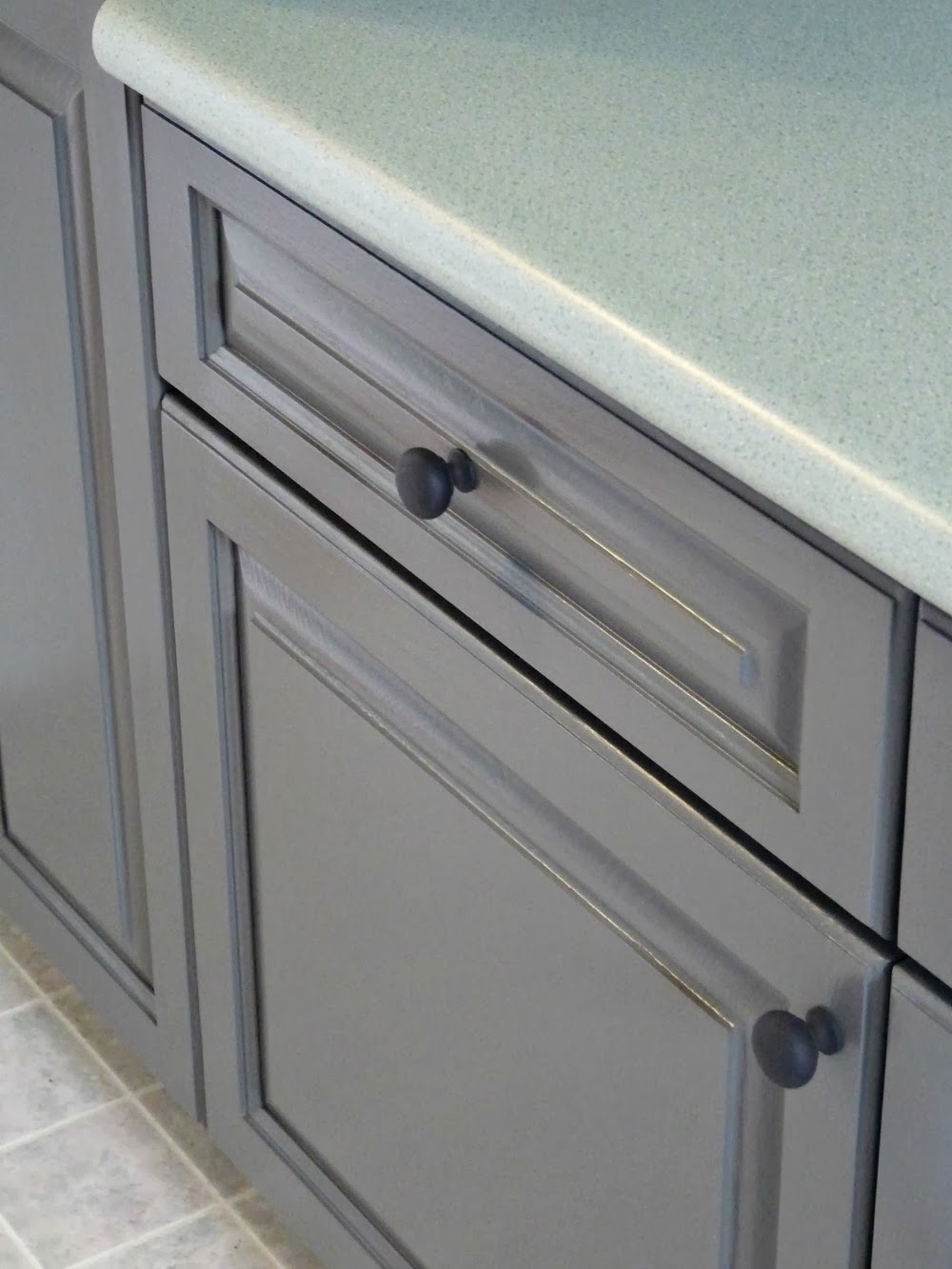 While I was removing the doors to refinish them, I removed the molding at the top of the cabinet for a cleaner look.  It was barely held on with finishing nails,
so it didn’t need much encouragement – just a little nudge.  I know other people add molding to finish off cabinetry, but I much prefer a simpler look.  Nothing I can do about the cathedral door fronts, but there’s only the two so I’ll just ignore them and invite you to do the same. 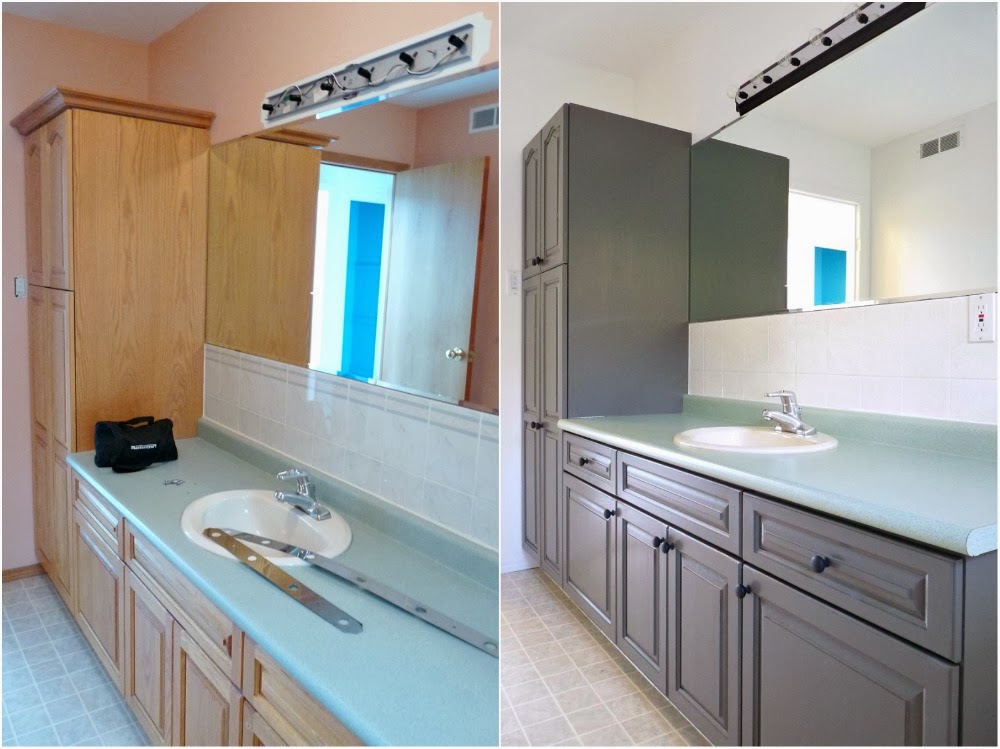 After I tackled the cabinetry, but before the doors were re-installed, the salmon pink walls and oak trim disappeared with a coat of Zinsser primer and three coats of Glidden Easy Flow paint, courtesy of Canadian Tire and our paint-the-lakehouse partnership.  In the townhouse I shied away from white walls in the only bathroom that still has a beige toilet because I worried it would make the beige “pop,” but the creamier colour I originally chose only made the toilet look beiger.  This time I said beige toilet (and sink and shower) be damned, I want white walls.  I especially love white walls in a bathroom because it looks so clean and so much brighter.  I’ll love the white even more once we get some bright art up on the walls.  We also removed the oddly placed towel bars and grab handles, plus the blinds and valence, so the walls are much less busy now.  I’ll figure out a window treatment soon, but we live in the country so it’s not super pressing. 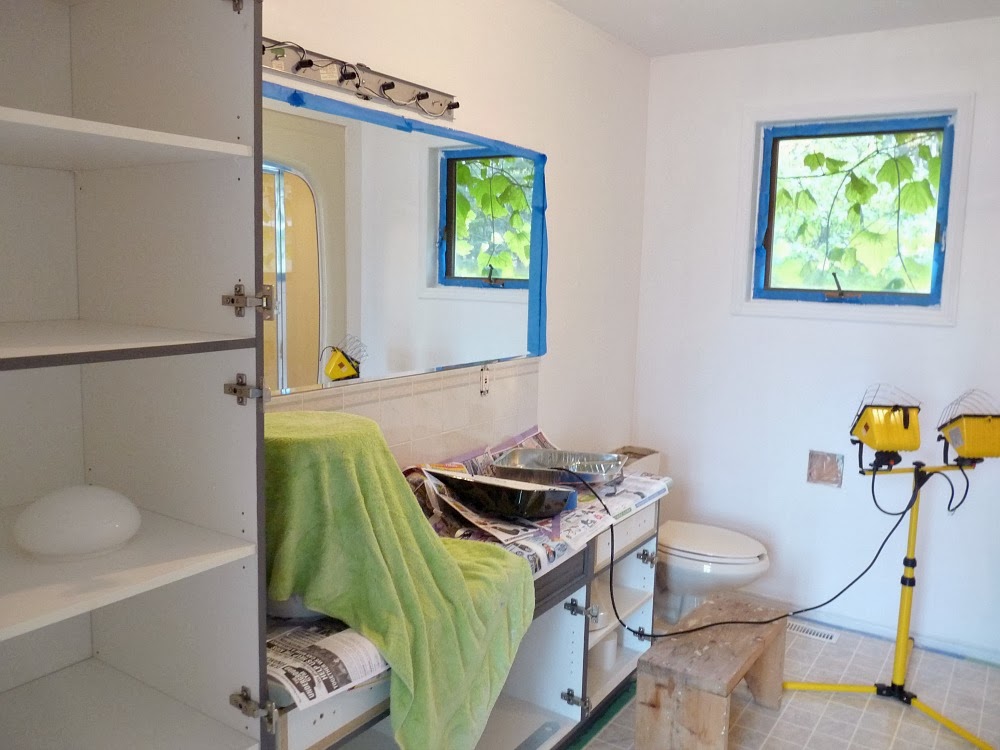 Next I refinished the tile, which was arduous but turned out alright. 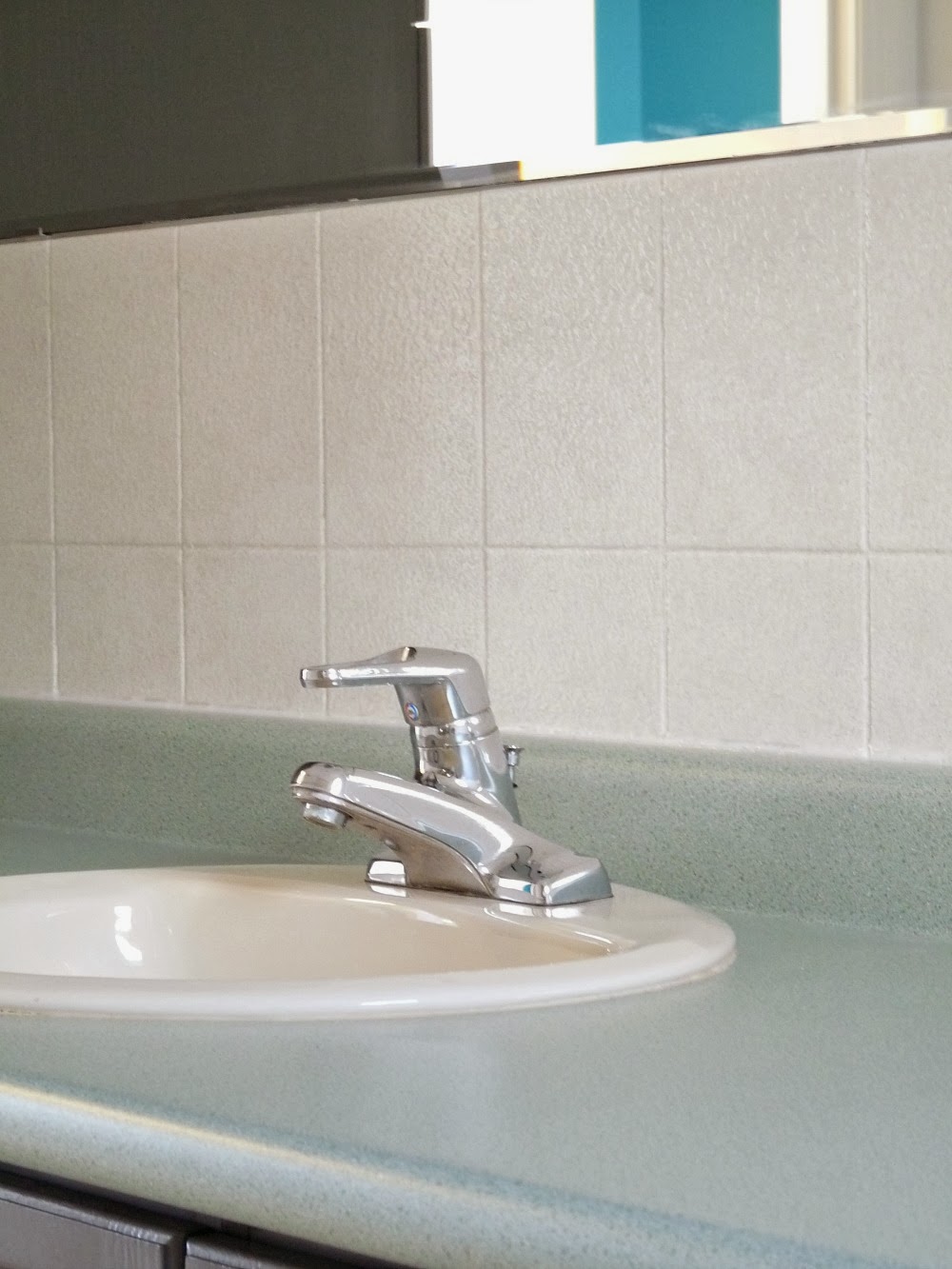 I decided not to buy new hardware for the cabinetry because I wanted this makeover to be cheap and even if I spent a few bucks per knob, that adds up to about $30.  Instead I used the leftover Rustoleum high heat spray paint that was rattling around in the can after I painted the fireplace doors and vents.  I just made sure to give the knobs a really good sand with a fine grit sandpaper (which resulted in a cool finish I was tempted to leave as-is), and gave the knobs a few thin coats of spray paint.  I love the matte black finish, especially against the grey cupboards. 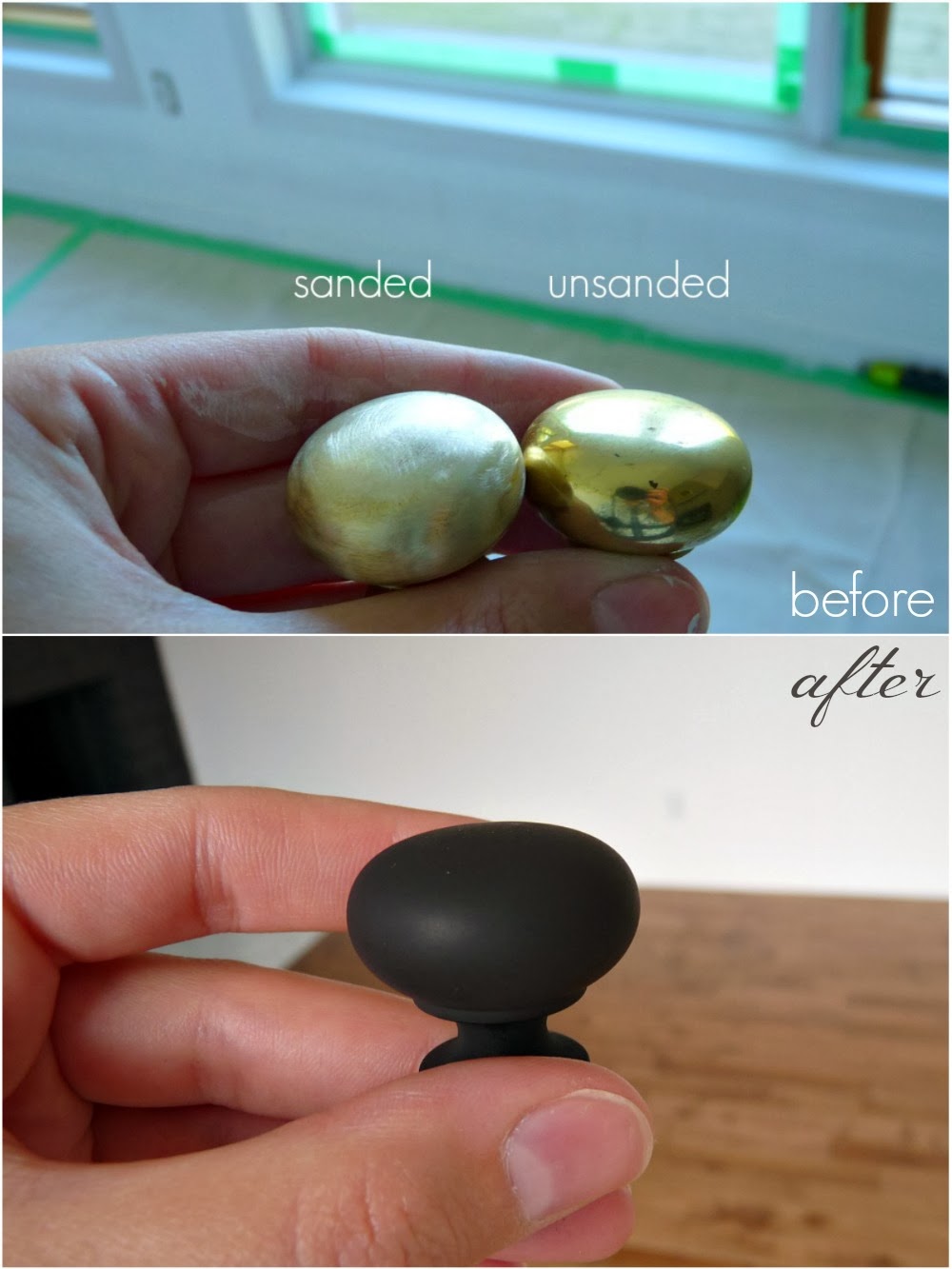 Emboldened, I painted the vanity light too.  I hate this style of light but I don’t know what kind of lighting I want for the renovation, and I didn’t want to buy something I may not re-use.  I originally discarded the chrome plate it came with, but when Hubby scrubbed the paint a little during install, back on it went.  Hubby reasons that it ties together the matte black knobs and all of the chrome.  Okay, I’ll buy it. 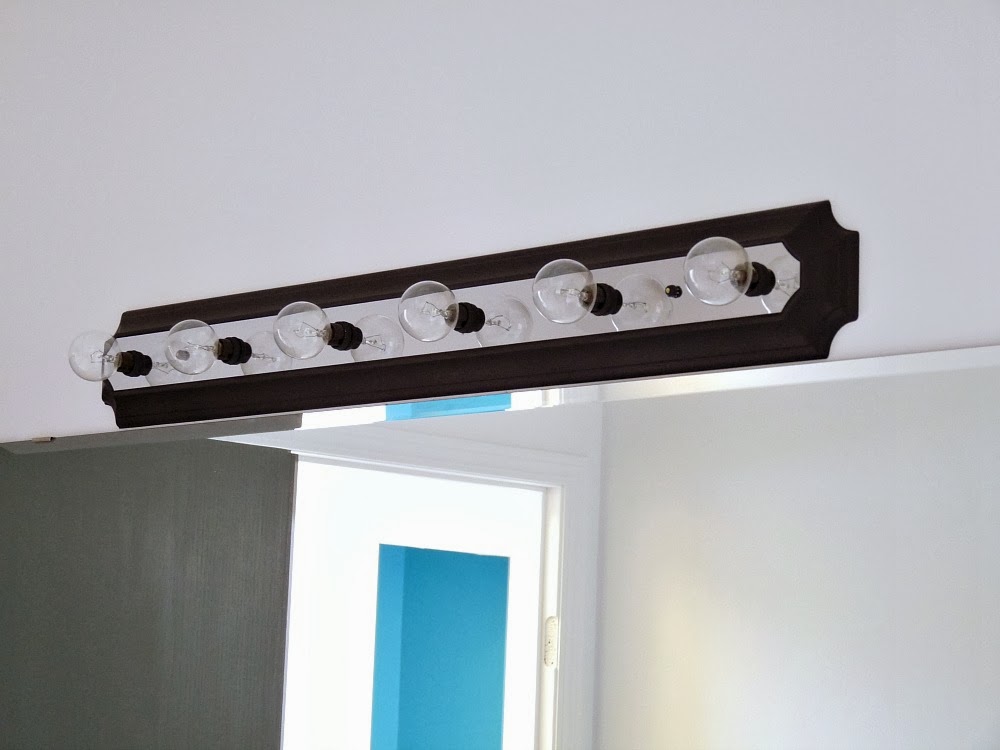 The overhead light is the one thing I did change, for the same inexpensive Ikea fixture that is now in the hallway, bedrooms and will eventually be in the kitchen, laundry room and half bathroom.  The cohesion makes me dopey-eyed happy. 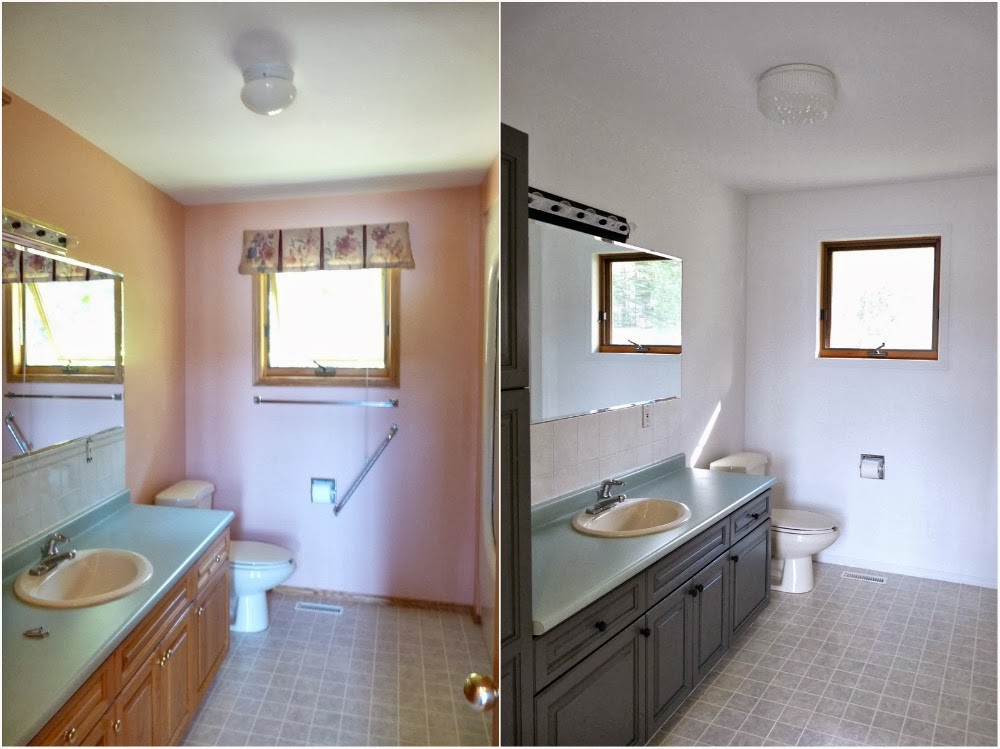 Last up, we nailed in some white quarter round where the vinyl floor was curling up.  Not a pin-worthy change, but a tiny fix like this, that cost pennies and solved (okay, hid) a wear-and-tear problem, just made the bathroom look newer. 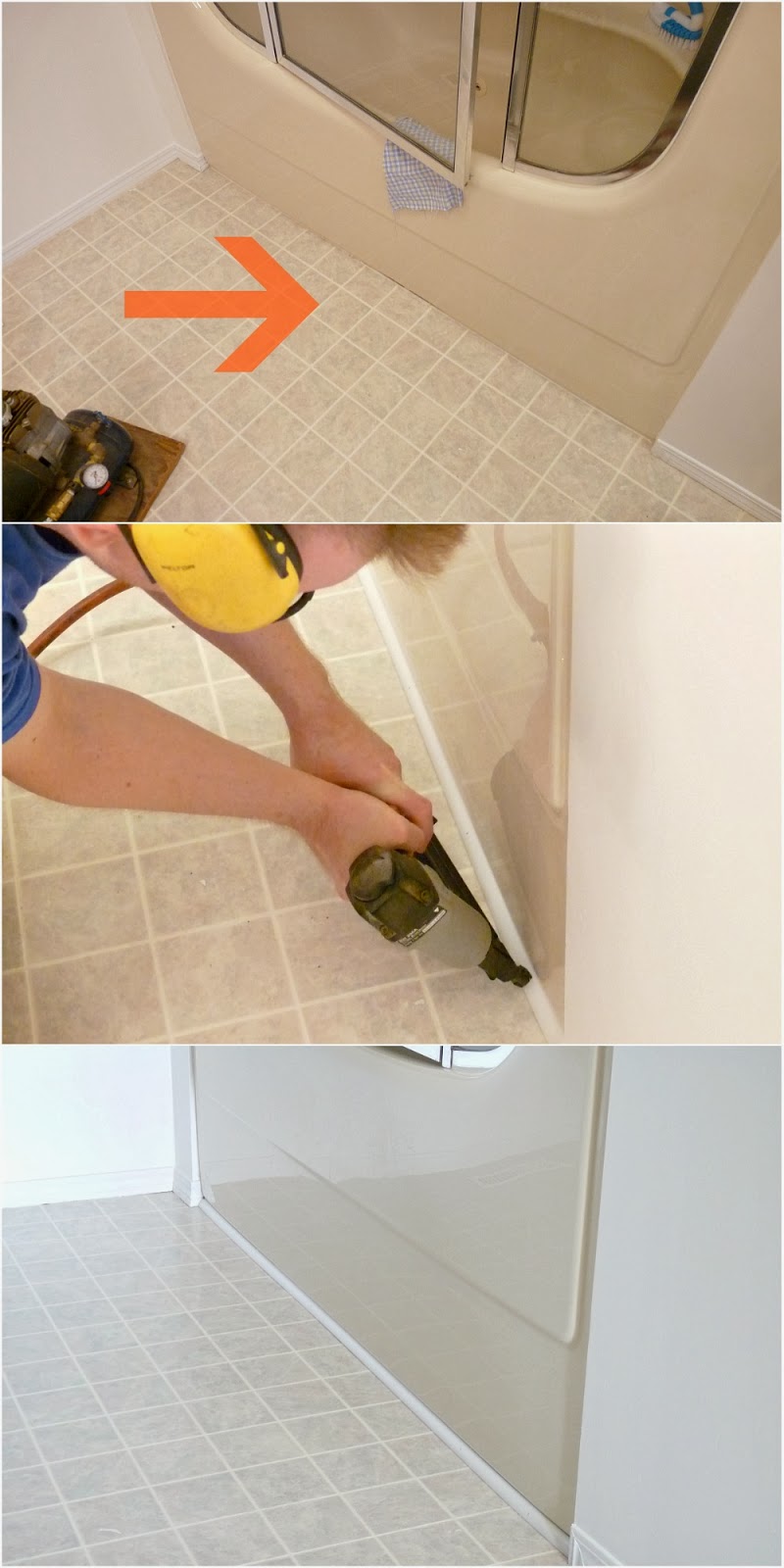 I still can’t wait to renovate, but for now the space looks brighter, fresher and more modern. 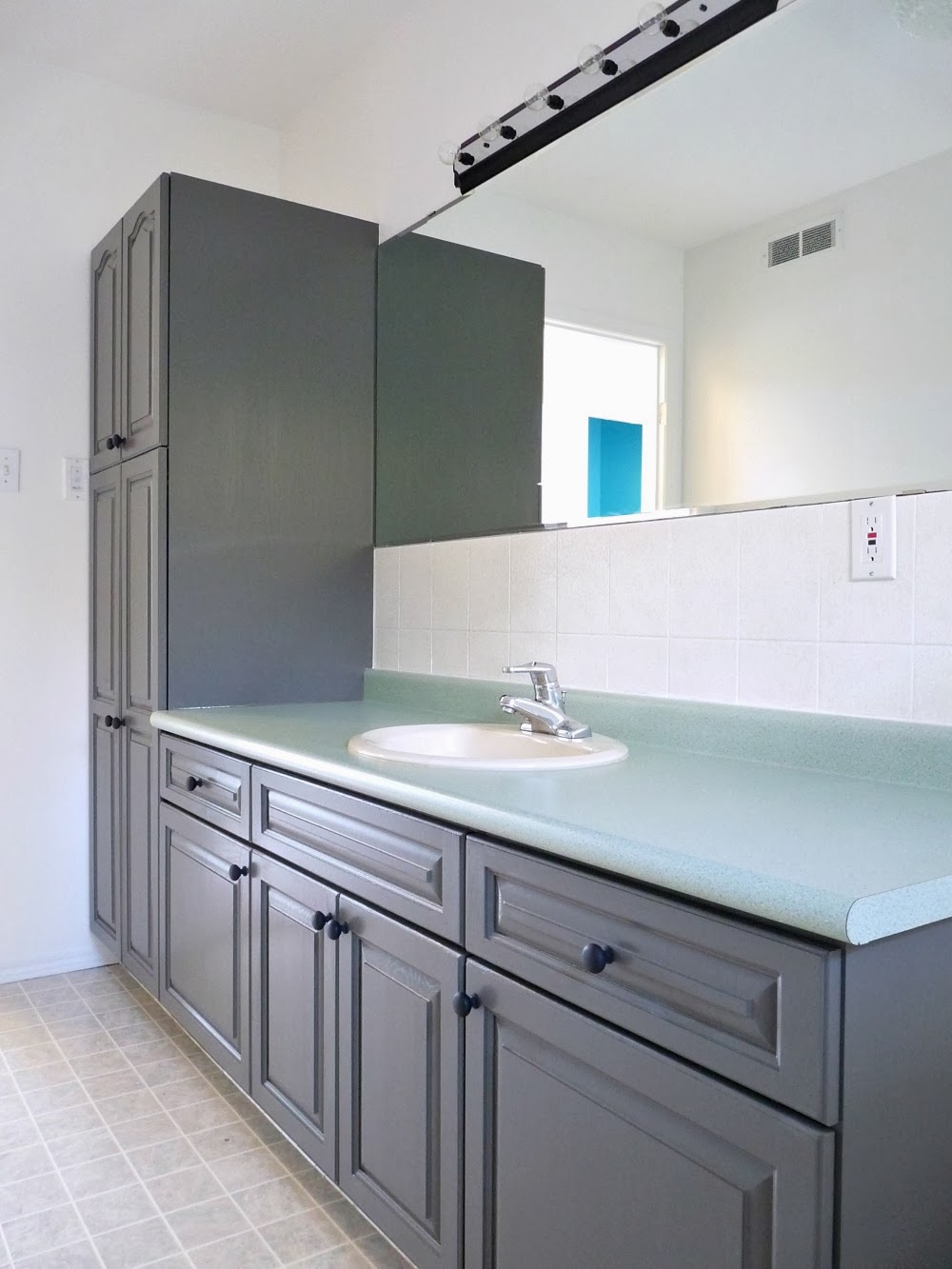 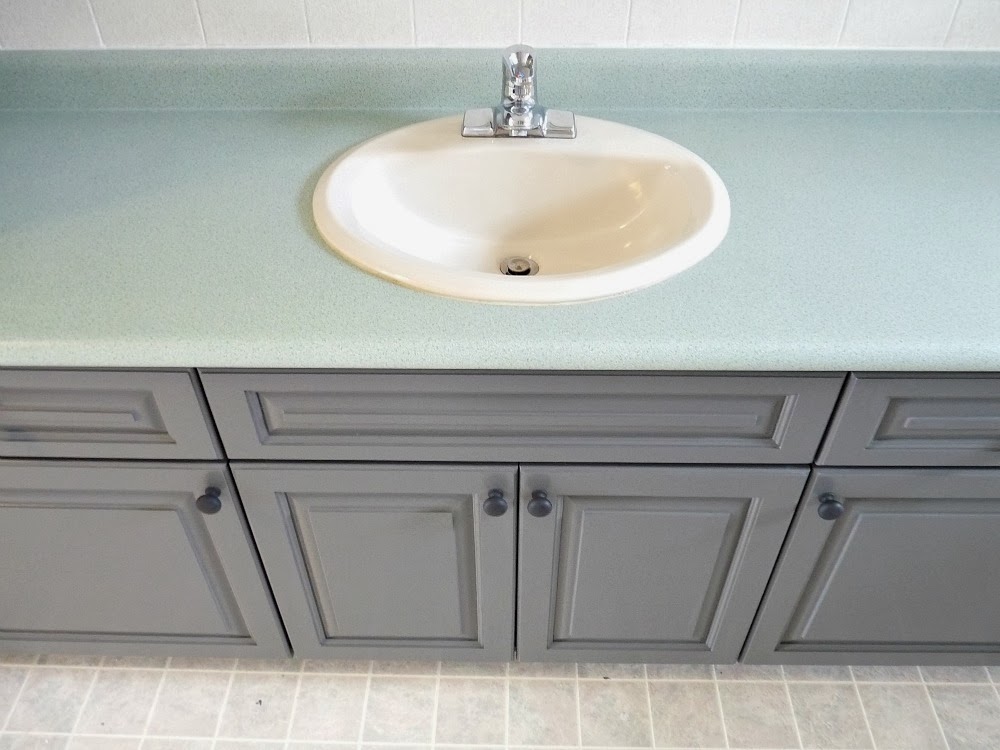 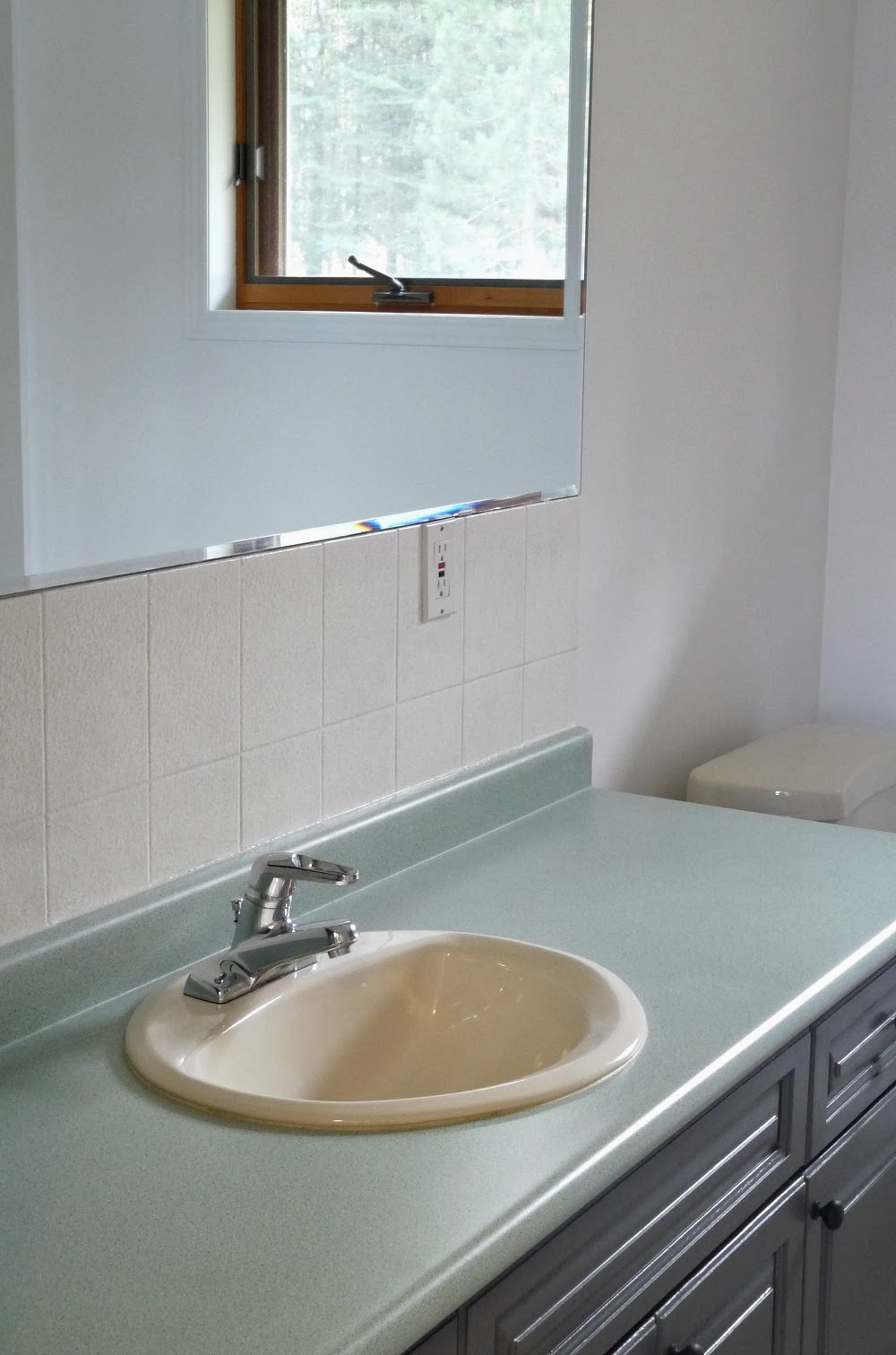 It really needs some art.  Soon, I think, soon. 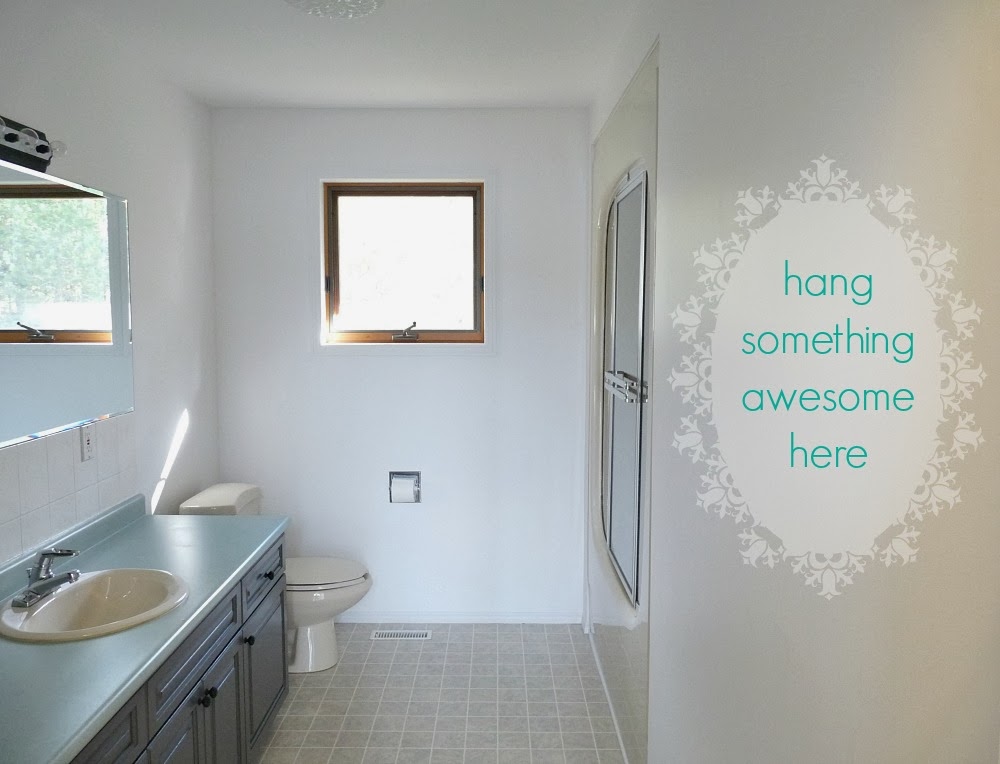 I’m planning something with really saturated colour, like a painting I just recently made for a friend’s living room. 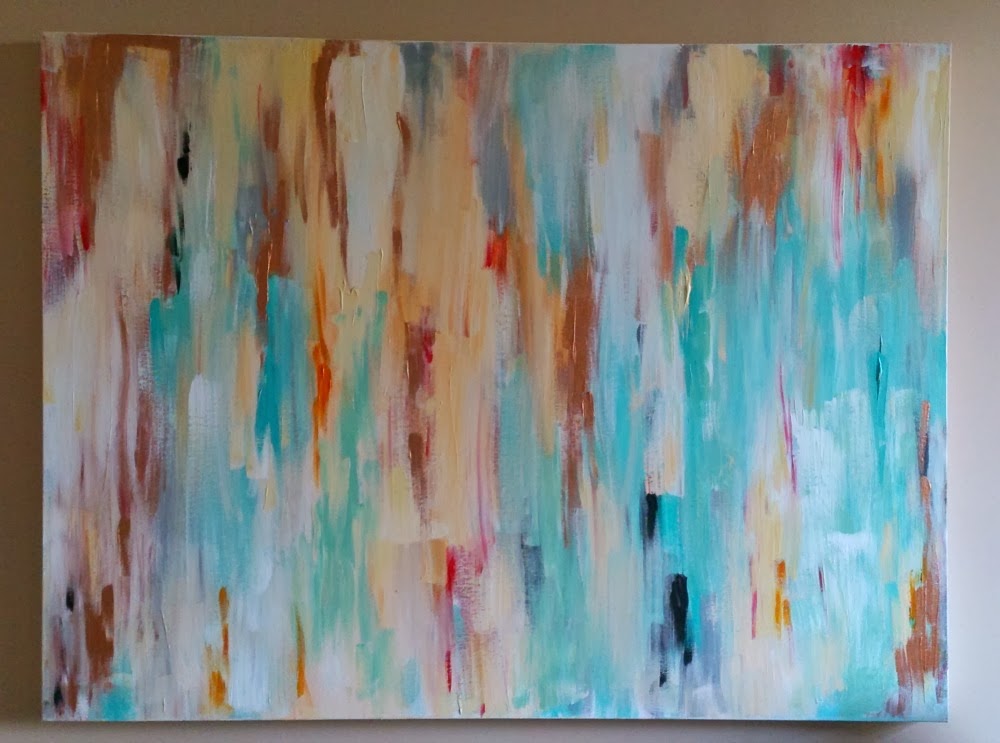