Handy Hubby is taking over today!  He deserves a round of applause for the crummy, frustrating job that was replacing some of the floorboards in our closet (which you saw on Monday had been installed around the closet organizer).  Here’s his explanation of how he did it: 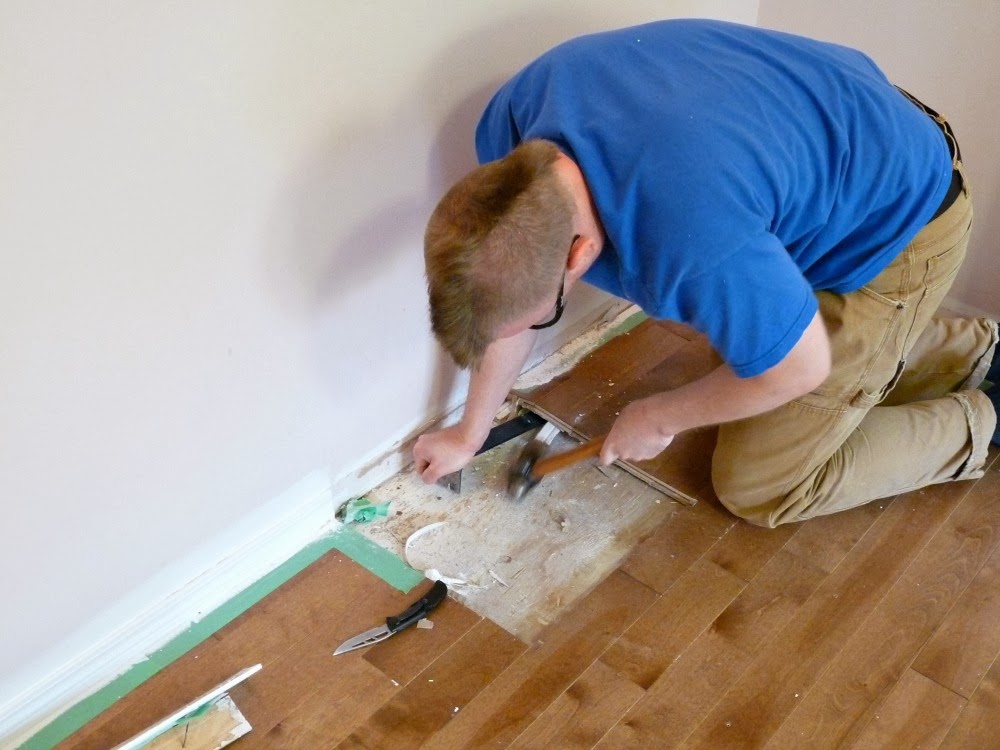 We lucked out because the previous owner had left a box of flooring from the original job.  This saved us having to colour match or try to track down the original brand.  We brought it in the house the day before to acclimatize. More time is usually better though.  Some companies will stipulate a week for the best results.  This ensures the boards don’t gap the day after installation.

I first removed the closet baseboard with a flat pry bar. Some of the paper from the drywall stuck to it from being painted, so it’s a good idea to cut the edge with a knife first.  I was not too worried about keeping the baseboard, as we knew we could replace it with new stuff.  However, if you go slowly you can usually get it off with minimal damage.

After I got the baseboard off I noticed a roadblock.  The hardwood was installed right to the drywall, actually pushing it in slightly.  For those of you that don’t know, wood expands and contracts across its grain as humidity levels change.  For this reason, hardwood floors should be installed with a gap around the sides.  This gap is covered by the baseboard (attached to the wall) and quarter round (attached to the floor). 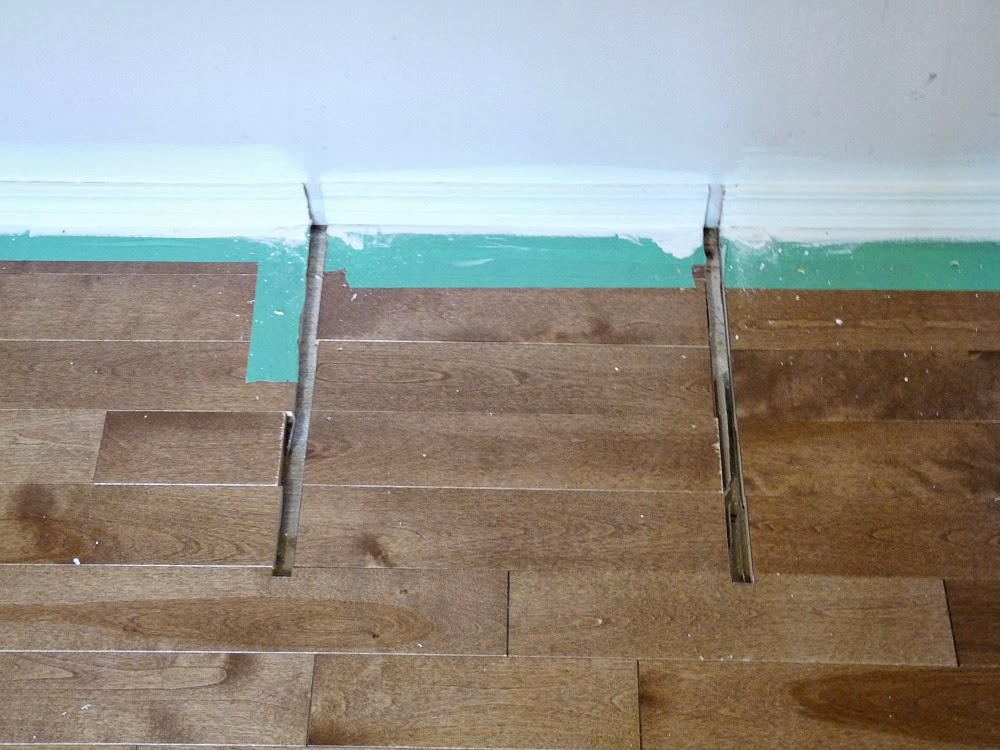 As can be seen from the photos, there is a square of flooring that was located under the old closet fitting.  This was relatively easy to pry up, as it was not pressed into the wall very much and I could pry from each end.  It was also nailed down with smaller nails, as a flooring nailer probably would not fit under the closet fitting.

The rest was a bit harder.  This floor had no gap around the walls, defeating my plan of inserting a pry bar into the wall gap to lift the first board.  I tried for awhile, but began to destroy the drywall. I was actually carving out the drywall in order to raise the board closest to the wall.  This was not going to work.  There was no room for the board to rise vertically.

On to plan B, which is the way I have typically seen it done.  This can also be used for removing boards in the middle of a floor.  I took a circular saw (also referred to as a Skil saw) and set the blade depth to 3/4″, the thickness of the floor board.  I then ran the saw along the length of all the boards, as close to the wall as I could, next to the seam on the board. This basically created a 1/8″ gap and cut the tongue off so the boards were not connected.

Once this was done I was able to start to pry the board from the exposed end where the square was.  Because the board was no longer attached to the one next to it, it was much easier.  I used a flat pry bar and a hammer. 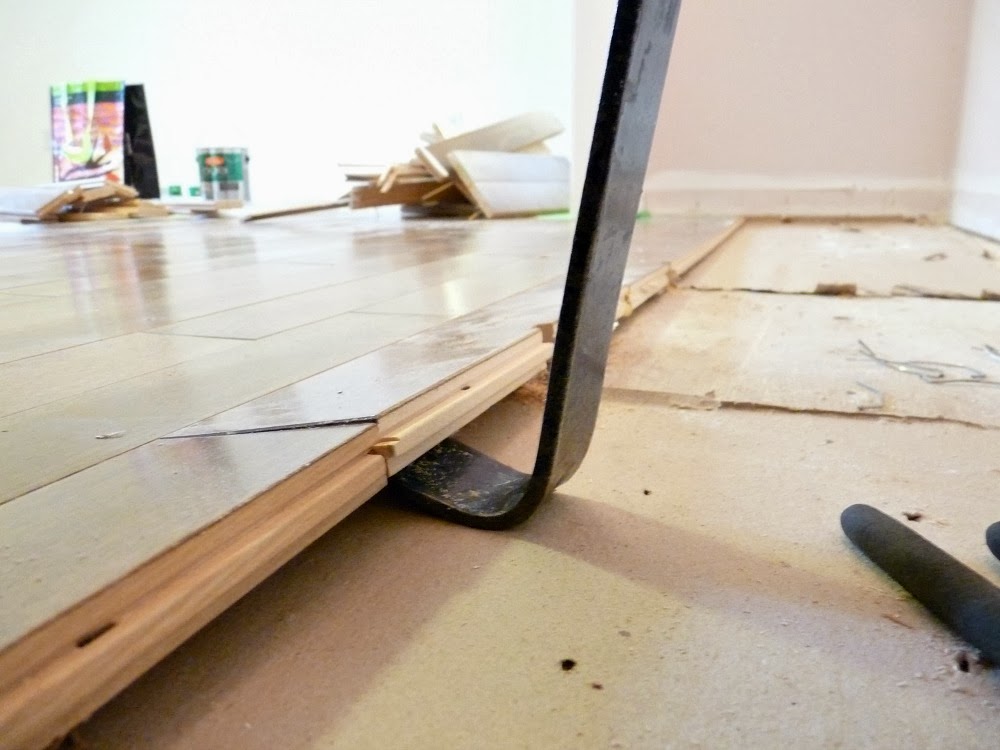 Once the first row, next to the wall, was out, the remainder was much easier. Unfortunately I was not able to save all the boards, but I was not counting on it.  This is where making sure I had enough to do the whole closet beforehand adds to the peace of mind. 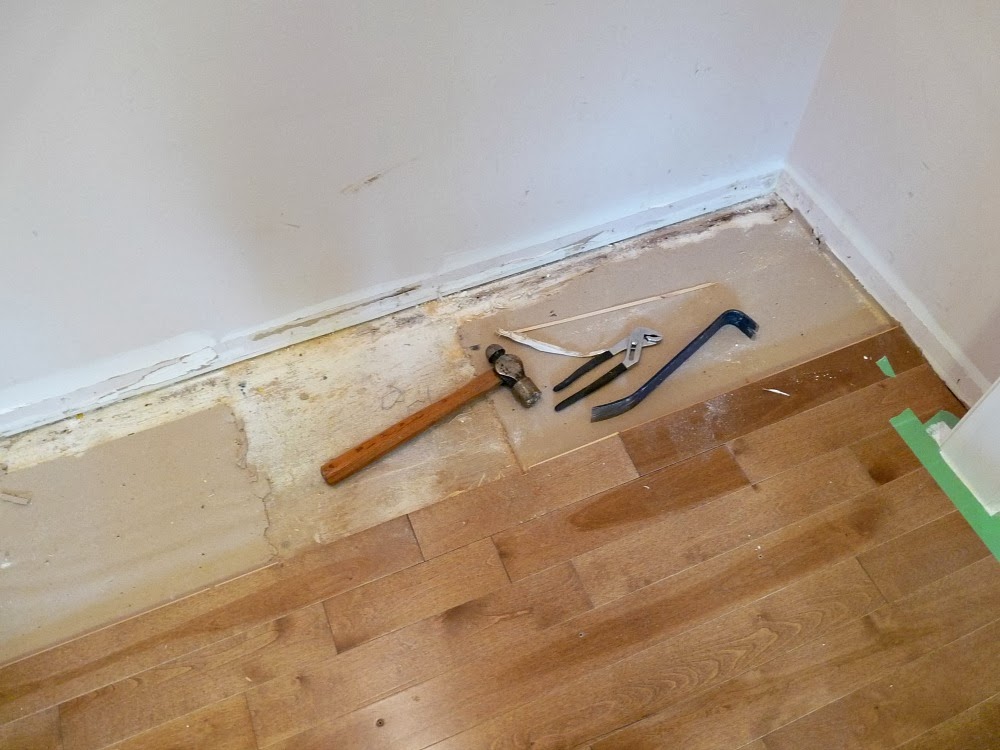 Once all the board rows were out I swept the sub floor and removed any nails so the surface was clean.  Using a rubber mallet (to snug the boards into
place) and a 12 gauge air nailer I installed the new boards to complete the floor.  I made sure to leave about a 1/4″ – 3/8″ gap between the
floor boards and the wall to account for swelling, and the next person who wants to take up the floor.  We found nearly identical baseboard, painted it orange, cut it, and installed it once the walls were painted. 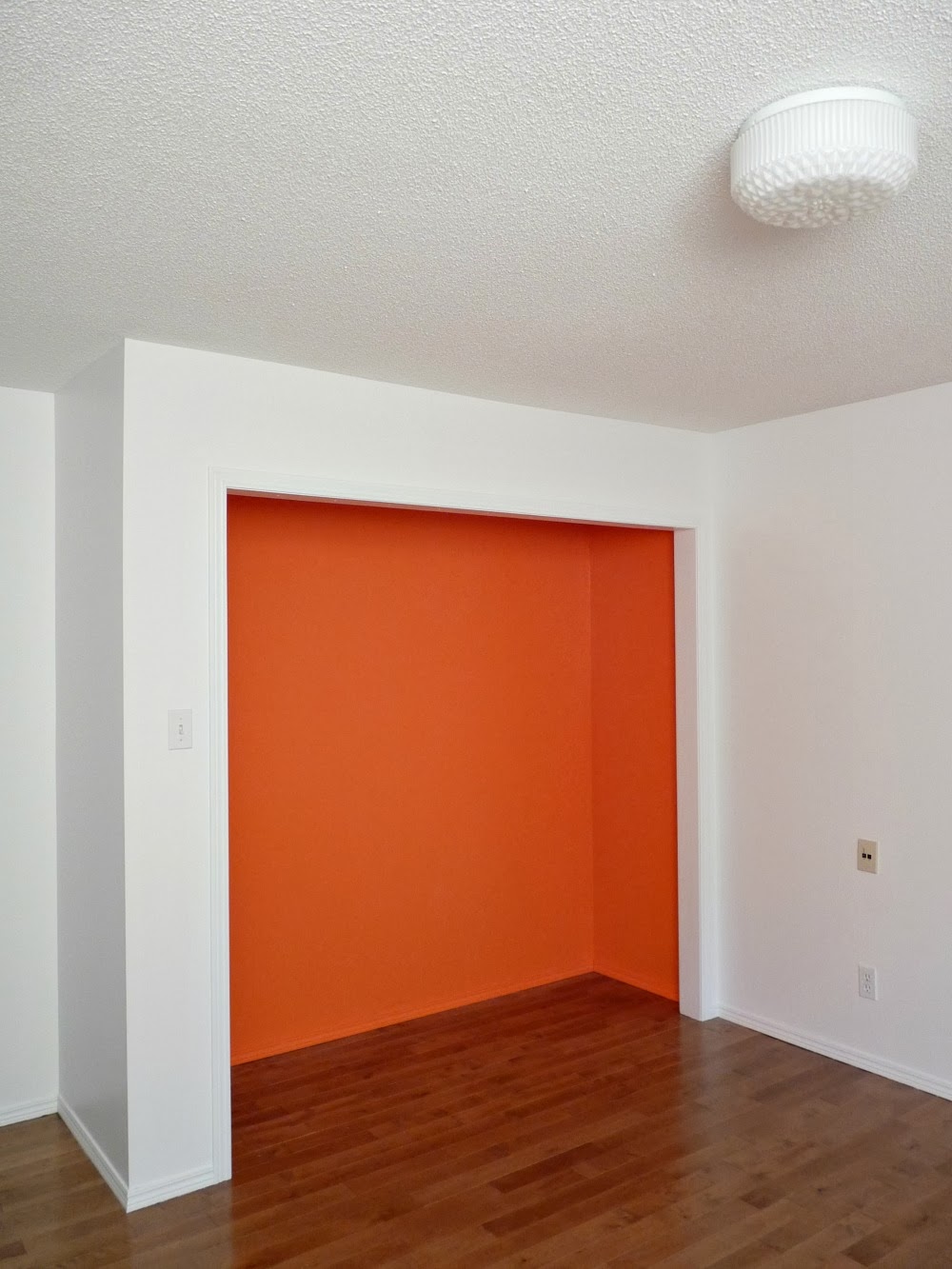 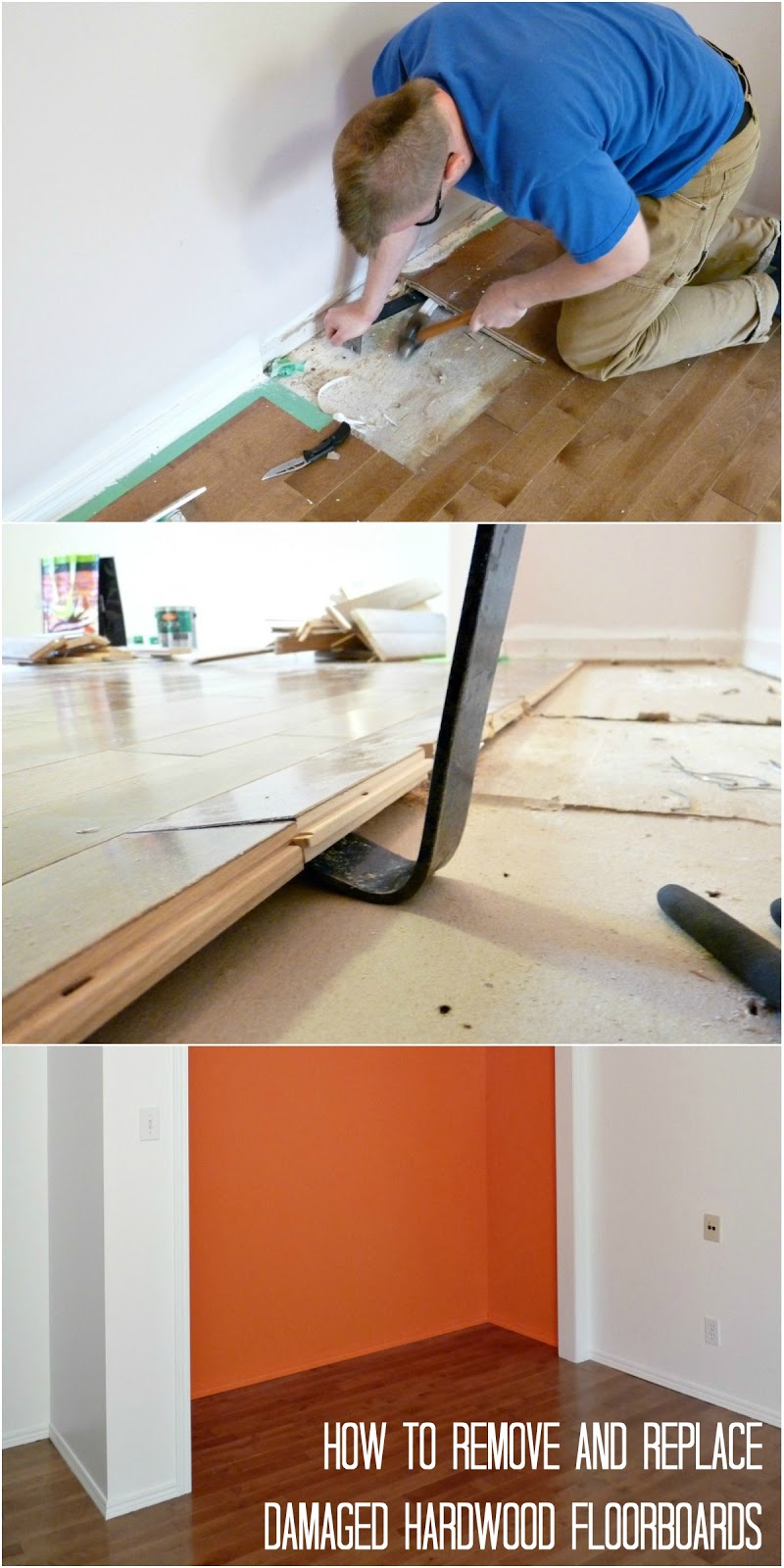 The discovery about the flooring being installed improperly by the former owner, who wedged them tight against the walls, has me worried that we could see problems down the road.  It has me thinking that, in a few years time, when we totally gut the kitchen and re-do the floors in there (and the adjacent laundry room and half bath), maybe we should just install new flooring everywhere in the house so it’s all uniform (save for the entryway and main bathroom, where I’d love a dark grey slate tile).  I’d love to go with something light, maybe a pale grey-tinged bleached oak, with wide planks.  The idea has me lingering in the flooring section of the hardware stores these days.