The lakehouse dining room nook is about seven feet wide, which is why we sold our incredibly wee four foot long teak cabinet from the townhouse dining room.  During the fall I casually kept my eye out for a larger mid-century credenza (either teak or walnut) but I had a serious Goldilocks problem on my hands: everything I found was too short, too long, too beat-up, too pricey, too far away.  Sigh.  One day we might make something for the spot (Handy Hubby’s Dad is a woodworker, after all), but in the meantime I decided to find a quick & easy placeholder. 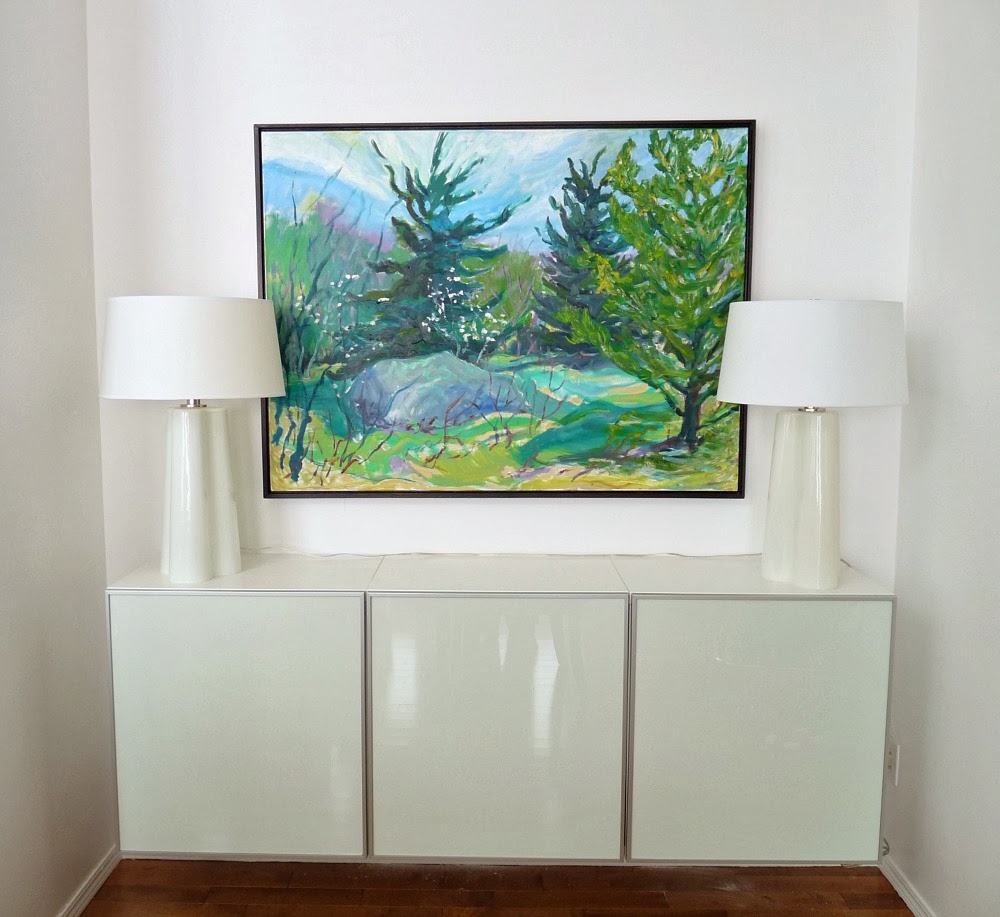 After much waffling, we opted for three wall mounted Ikea Besta units (the same kind we use for television storage in the living room), with glass front doors that have a white backing.  I splurged on the glass doors because they look a little beach-glassy to me (with the faintest grey-blue tinge).  They are similar, but not identical, to the glass backdrop behind the television, which is equally luminescent but more of a minty hue.  The new ceiling fan also has a similar glossiness, but it’s much greyer.  Can you tell I’m kind of into anything with some glassy glow?  In case I get bored of the look, there are other options.  I can put a fun fabric behind the glass, or I could even paint the glass itself – painted glass turned out so beautifully with the amazing mirror Sarah made from an 80s glass chandelier. 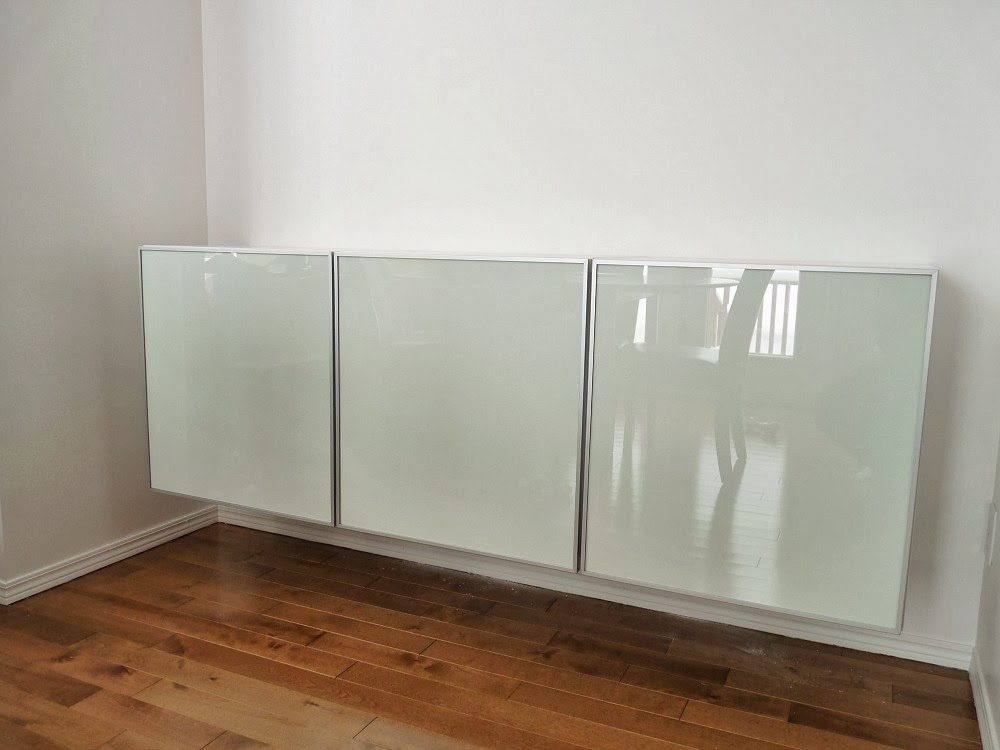 One problem: there is an outlet immediately behind the wall mounted Besta and the only other one is to the right.  This means the cord for the lamp on the left needs to run along the credenza.  Messy!  Not to worry, we’re going to be building a wood top for the credenza, stained pale grey, to finish off the look and hide the Ikea-ness of it (most notably the seams between the three units).  At that time we’ll drill some holes in the top and run the cords down into the unit, to access the outlet hiding behind.  I am unbelievably excited about the prospect of totally hidden lamp cords. 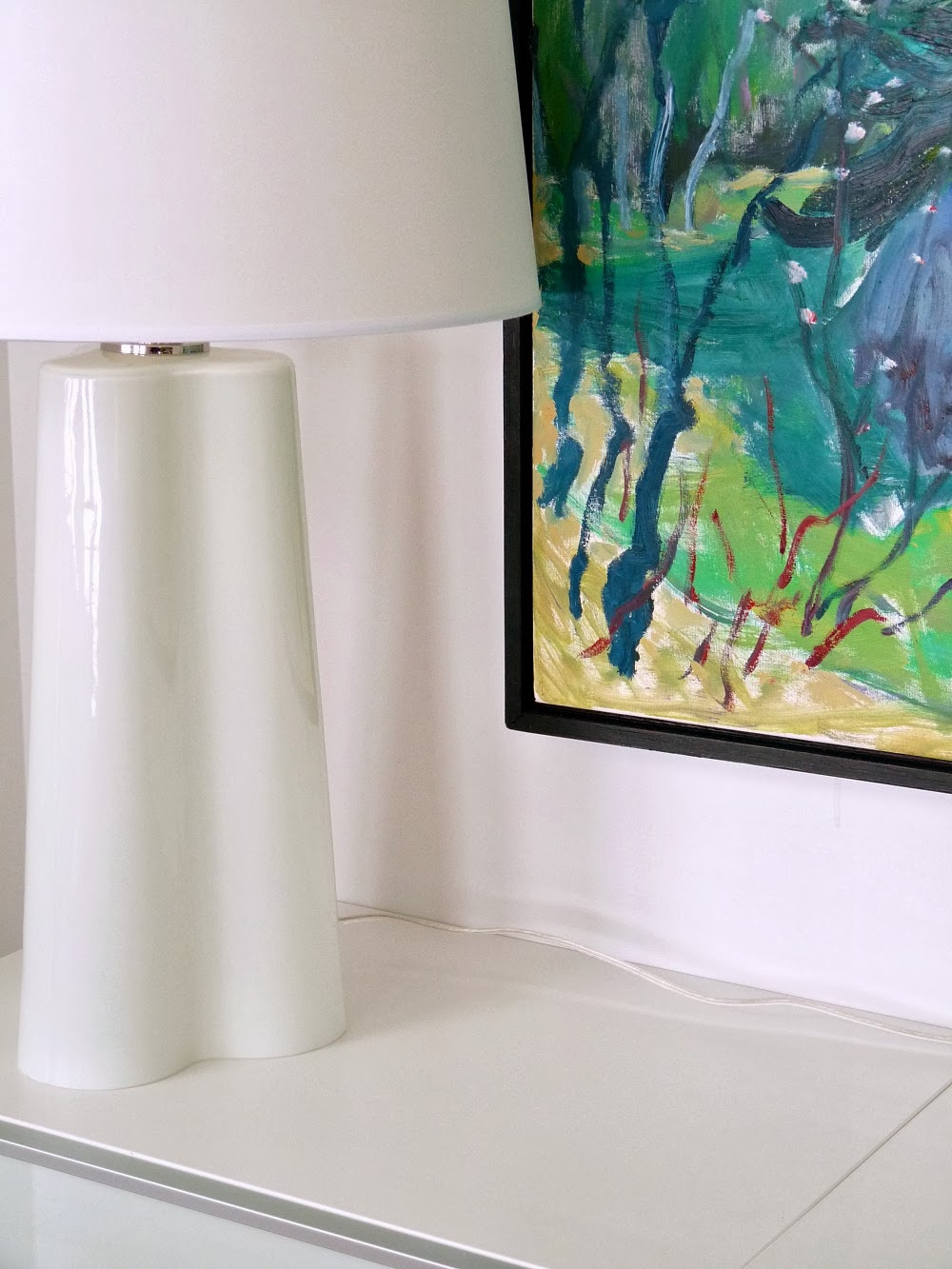 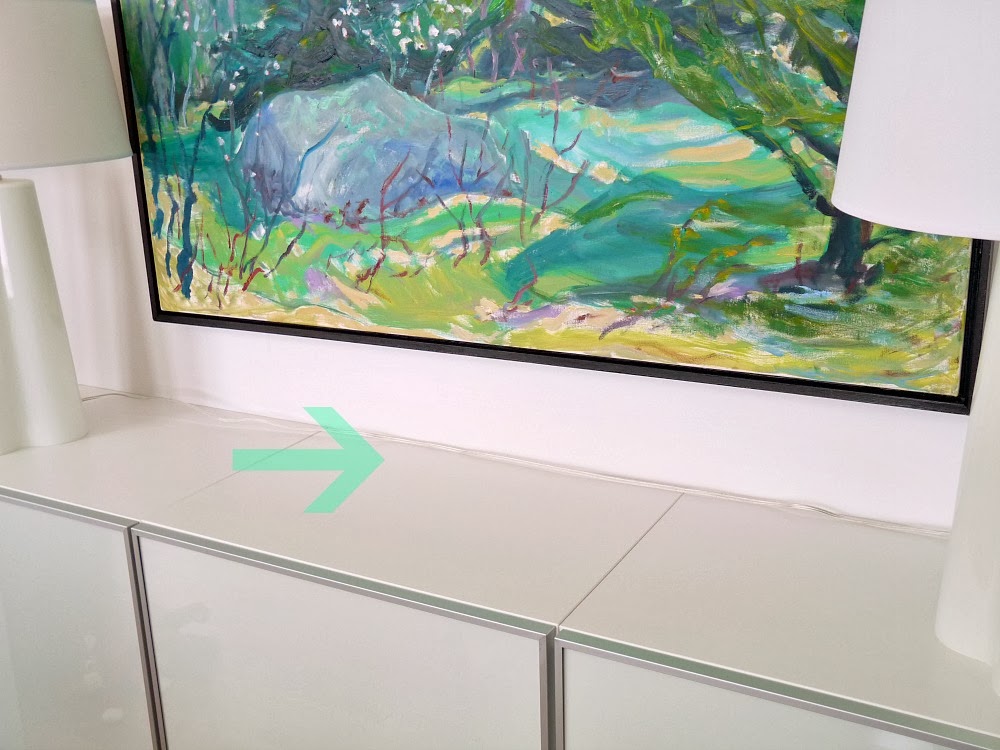 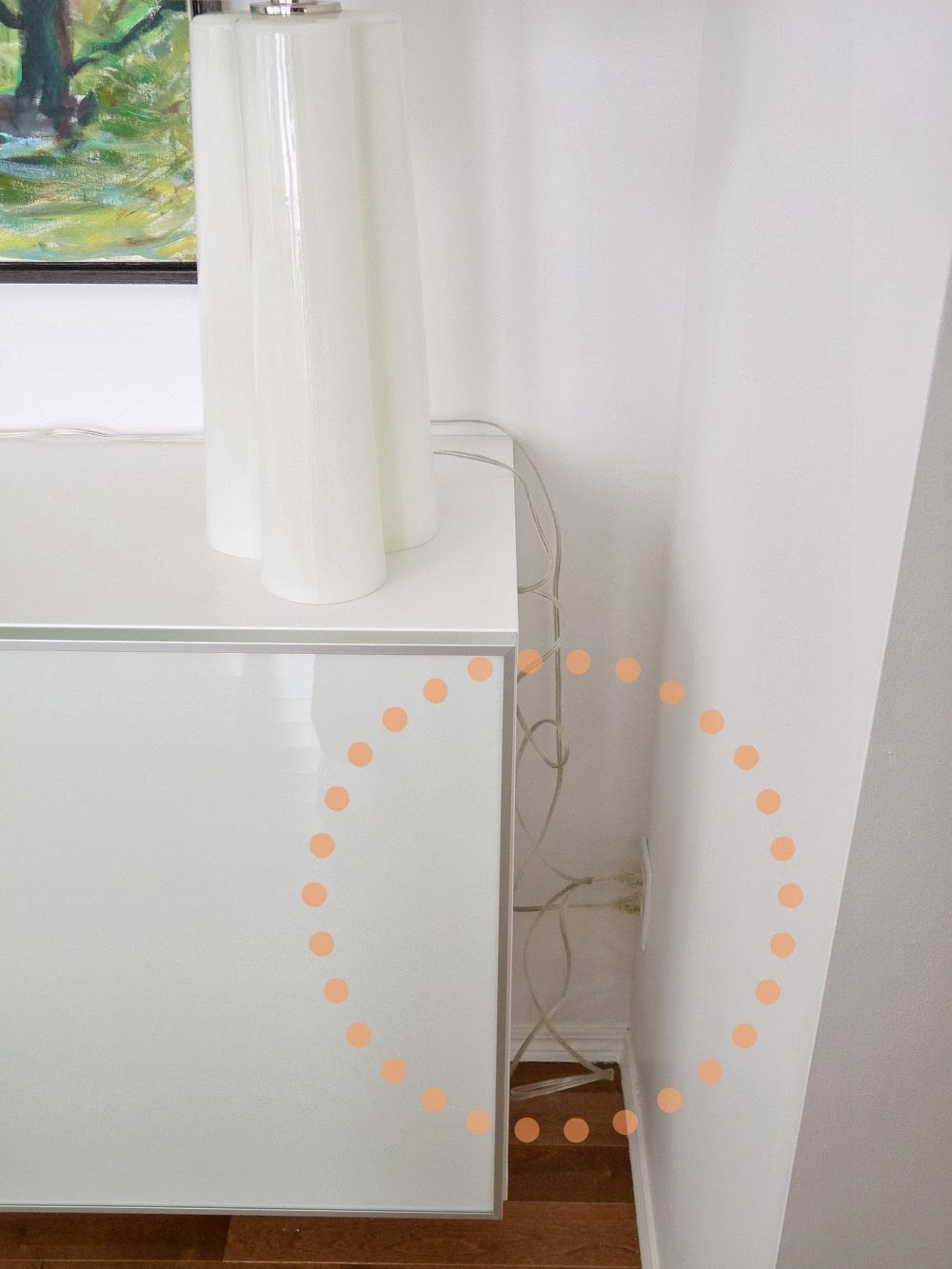 I’ve known all along that Hubby’s grandpa’s painting, which hung in the townhouse dining room, would also look good here.  It’s the perfect scale for the nook.  I topped the credenza with the milky, glossy lamps from the townhouse office and I love how they pair with the glass doors. 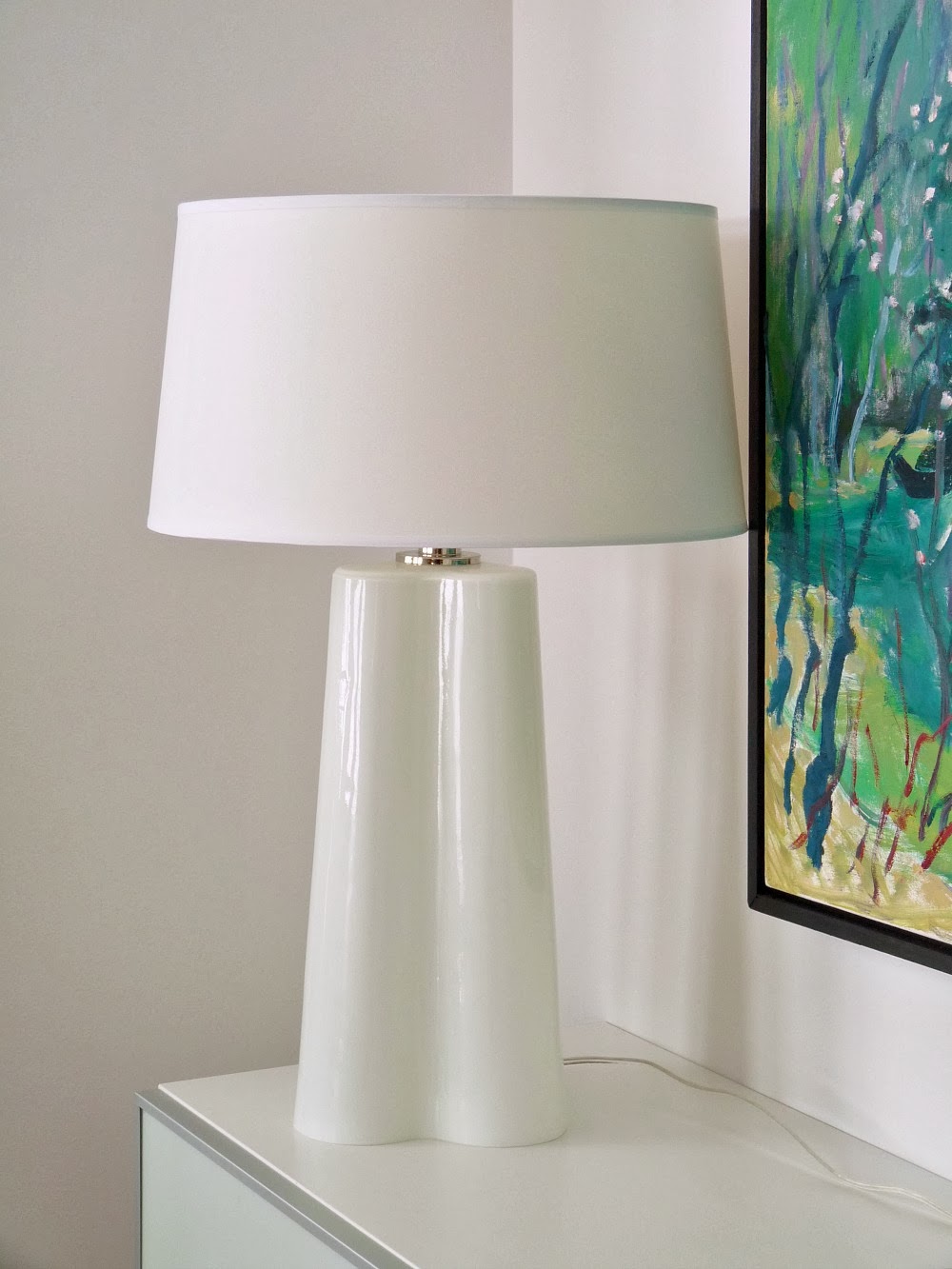 As a reminder, here’s how the nook looked when we first toured the home (it had furniture in the listing photos, but was emptier for the house inspection): 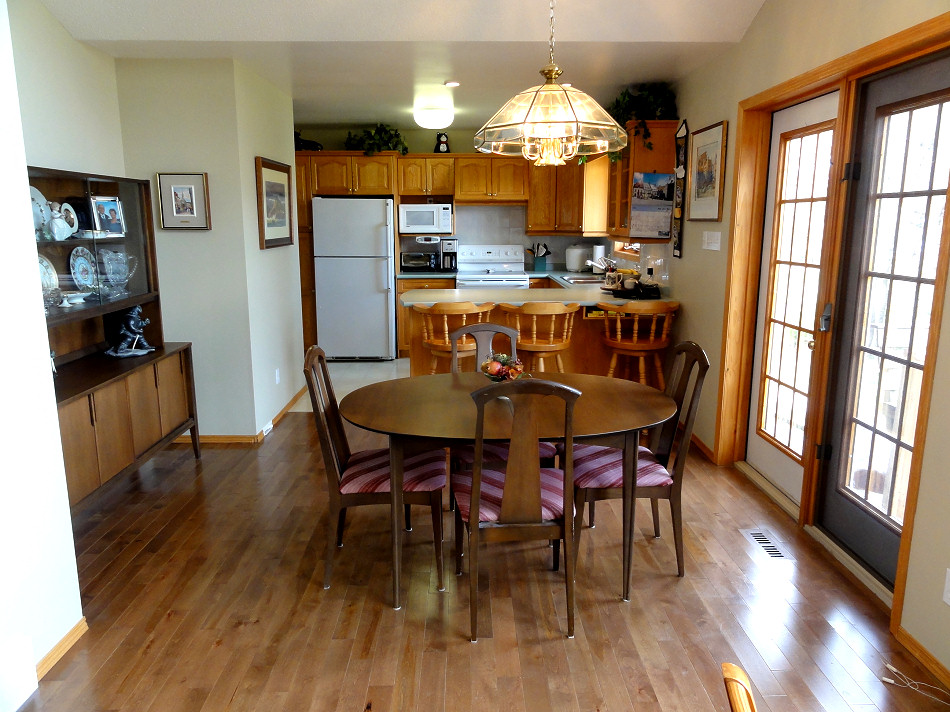 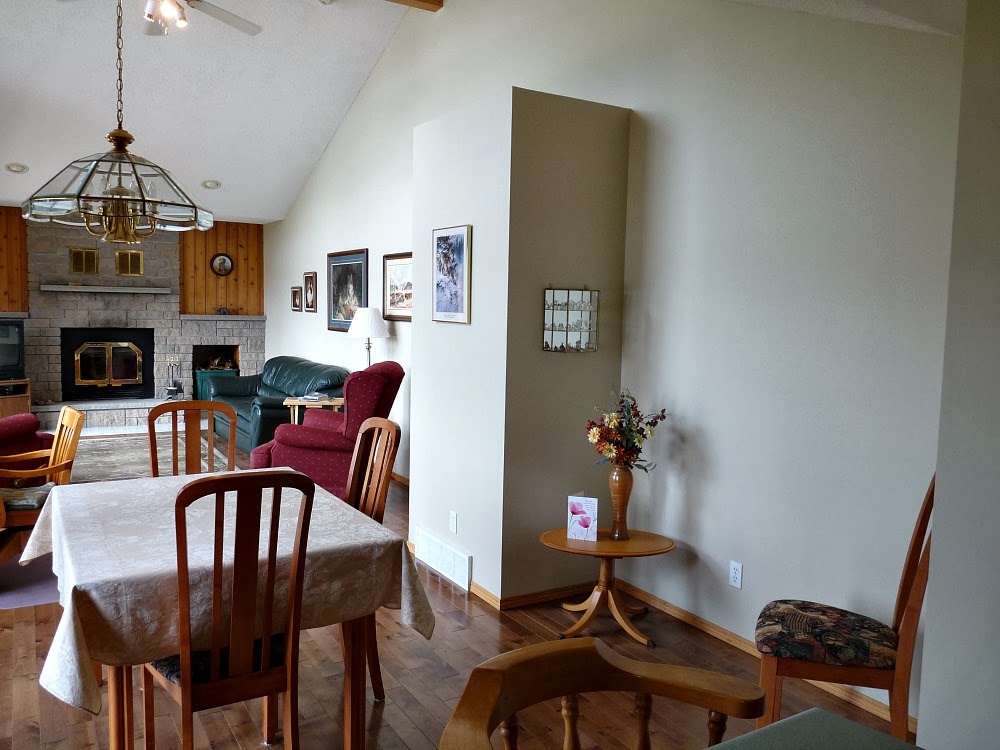 UPDATE: We finished the floating credenza!  See how we made a plywood top by reading this post and also take a look at how we finished the piece using furniture grommets – I love those hidden lamp cords!