Our solid maple kitchen counters have been built!!  Hubby and his Dad did a beautiful job making them, so it was a little nerve wracking for me to not only choose the finish, but also apply the actual stain.  Hubby will be sharing the construction how-to on the blog soon, but in the meantime I wanted to show you how I stained them – and share my stain snafu.

Originally my plan included turquoise cabinets and grey counters.  I loved our low-maintenance grey laminate counters in the townhouse because they reminded me of concrete.  They cost $750, which is more
than I wanted to spend on our kitchen spruce so I
nixed that option. 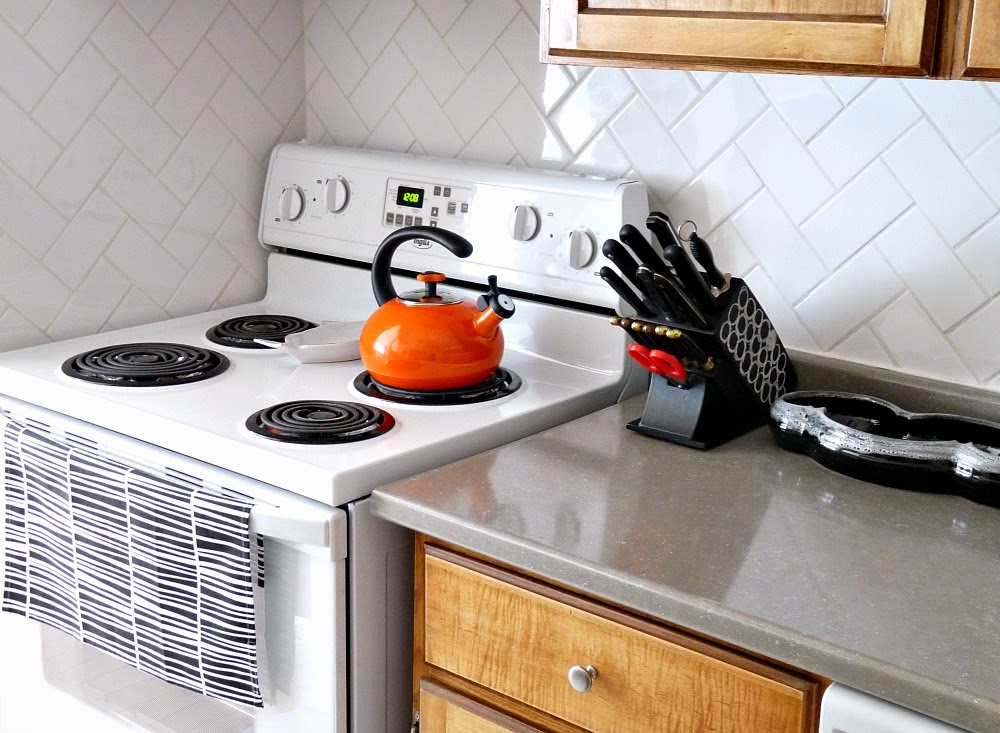 Covering worn out laminate counters in actual concrete has became a DIY trend (see Kara Paslay Designs, Little Green Notebook, and A Beautiful Mess for three great tutorials), and I’ve loved that look as well.  I nixed this option too, though, because the existing mint green laminate counters were bubbling and peeling, and had a weird rounded edge that bothered me. 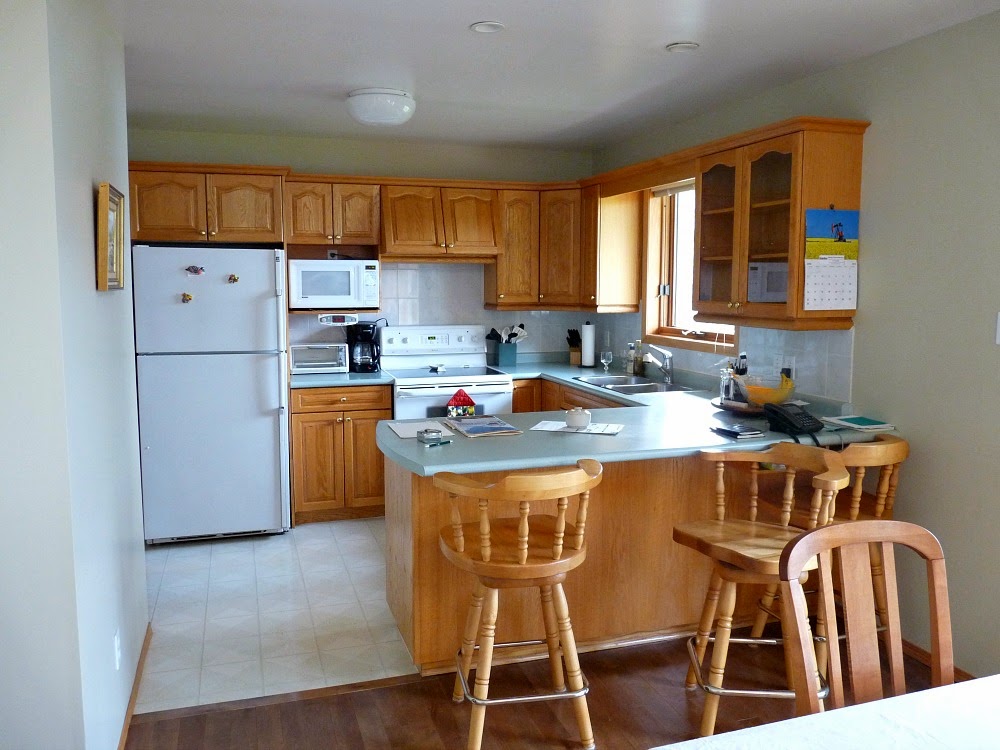 Still, I wanted some kind of grey counter for the lakehouse kitchen because it would be a pretty, cool neutral to pair with turquoise, and I thought that a shot of grey in the kitchen would connect with our darker grey fireplace.  Because Hubby’s Dad is a woodworker and Hubby’s picked up some skills, I figured Hubby could make some wood counters for cheap and we’d stain them grey.  Somewhere along the way our wires got crossed with Hubby’s Dad, who hooked us up with some wood from one of his suppliers.  I had planned on buying cheap, builder’s grade wood at Home Depot and budgeted about $200-300 for this project but my father-in-law ended up picking out some quality maple for us, to the tune of $611.  I don’t think he realized our kitchen spit and polish is just temporary, while we save for and plot a full reno. 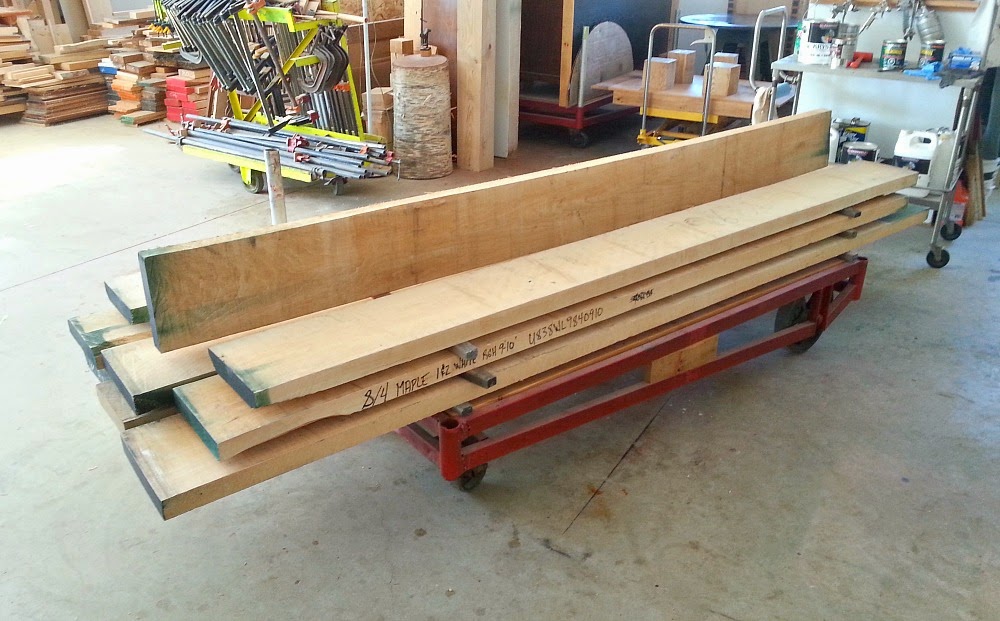 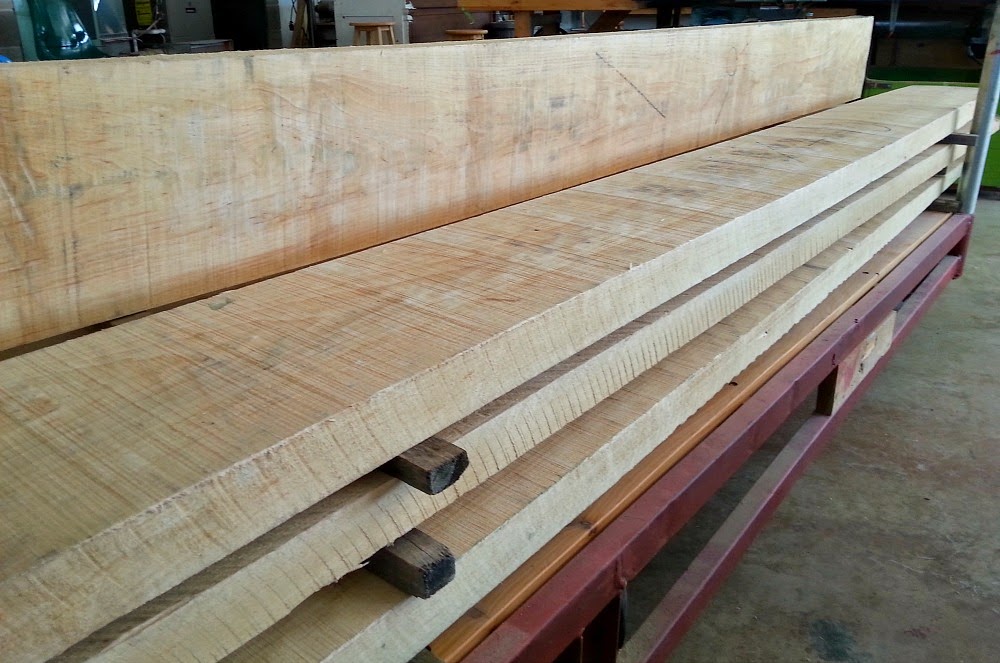 The finished maple counters have beautiful grain and are substantial: they are 1 3/4″ thick and the largest piece weighs 130 lbs!!  At first I fretted that these beautiful maple counters are too fancy for
our kitchen spruce.  They are, but ultimately I’m thrilled with them.  And they were still cheaper than laminate.  Plus, I figure that we can always re-purpose the counters for the fish room (see the house tour) or make a table(s) top from the wood.  Here are the unstained pieces, laid out how they will be in the kitchen: stove in the gap and sink in the skinny piece.  The widest piece hangs into the dining room, with stools pulled up to it. 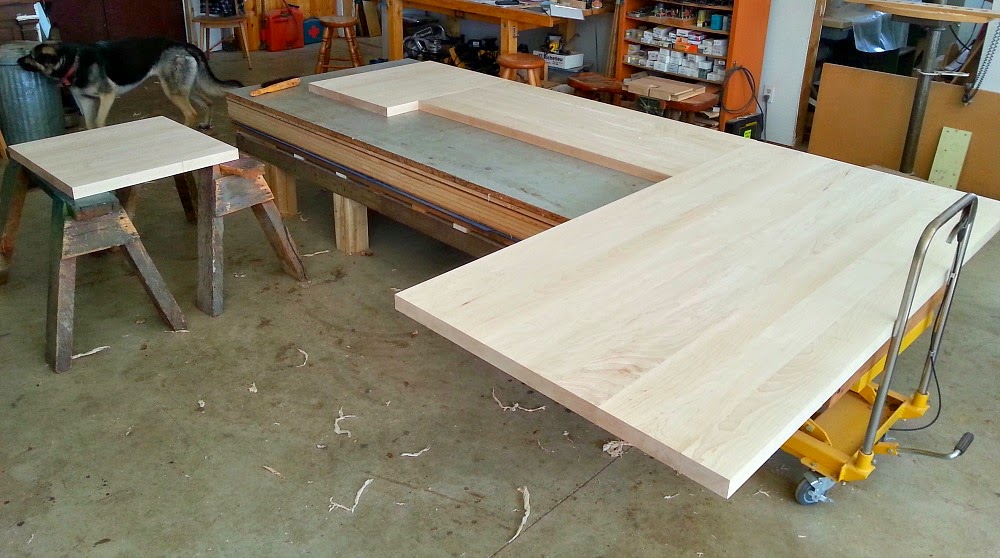 It took me days to finally track down a not-brown grey stain and the folks at the store tested it on a sample of maple that was more yellowed than our wood, and it looked perfect.  On our wood, however, the blue-ish grey turned purple thanks to the pinkish hue of the maple peeking through.  I think lighting had a lot to do with it too.  Unfortunately, I hated the stain with the turquoise cabinets – it looked so 80s!  I’ve learned my lesson: it’s important to test stain not just on the type of wood I’m using, but on an actual piece of my wood for the most accurate indication of colour. 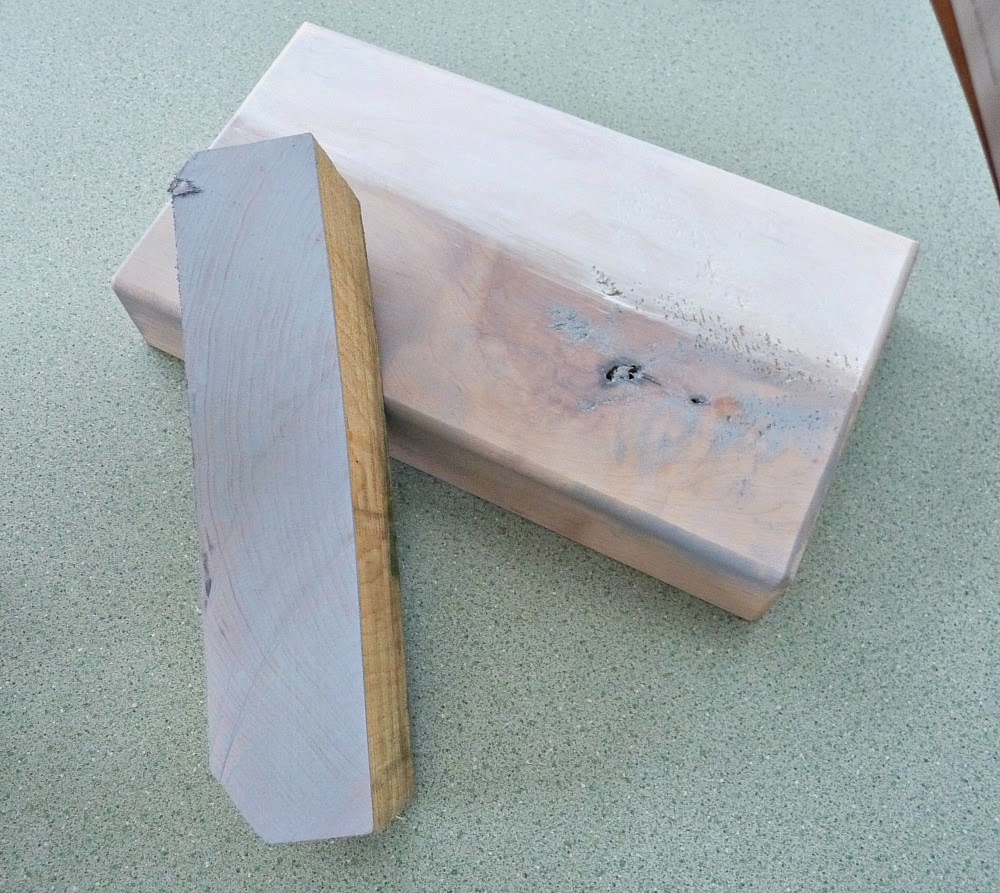 I deliberated some more and ultimately decided I was wrong about the grey because the cabinets are very bold and the painted fireplace is also dramatic, so I figured we need something more mellow, instead.  I opted to use the same white stain we used for Hubby’s welded desk – Saman brand in “whitewash”.  As a bonus, it dries quickly (1/2- 1 hour), which made staining multiple pieces with multiple coats less of a chore.  I guessed it would end up a creamy white, and I thought that would relate well to the off-white and beige flooring, which we’re not changing.   You know I’m really into bleached oak hardwood floors, so I also thought that whitewashed maple might have a similar, airy, Scandinavian cottage vibe.

All this to say: yes, I totally chickened out and went with white stain.  But look how pretty it is: 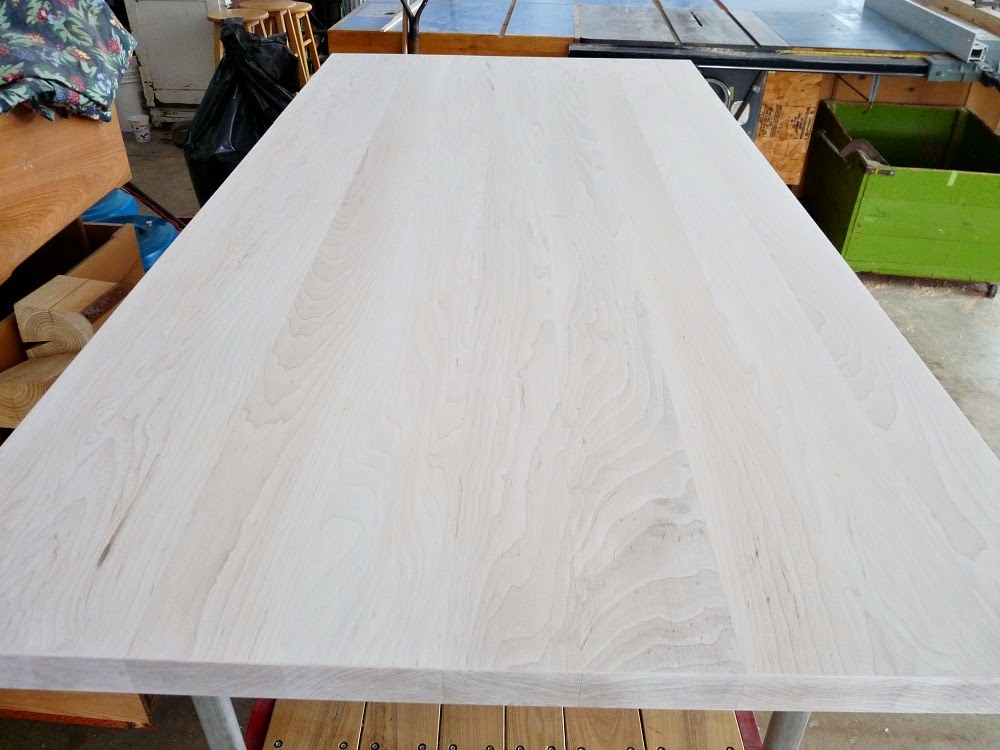 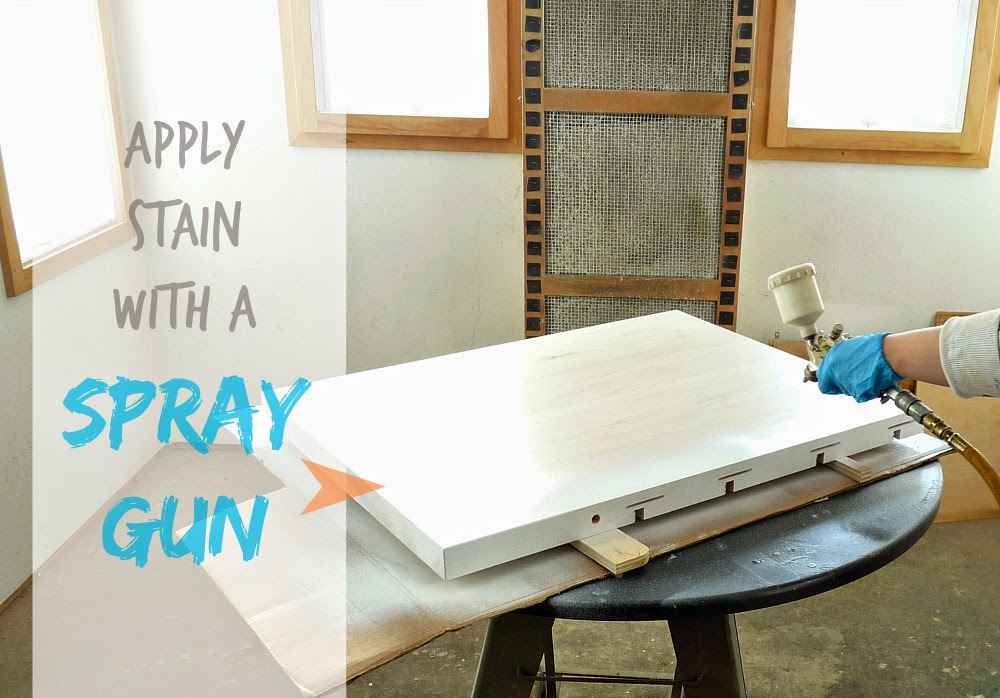 Application was a breeze: after giving the counters a hand sanding with 150 grit sandpaper, we moved them over to Hubby’s Dad’s spray booth.  We brushed off any dust and I used a sprayer to apply the stain.  I contacted Saman and they recommended adding 5% water if the stain is applied this way, but I found it to be watery enough (it is, after all, a water-based stain).  I sprayed each section, starting with the edges, and then – spraying along the grain – worked my way from the section closest to me to the one furthest away, overlapping with each pass.  It’s a good idea to apply stain or paint so that any over-spray is on an unpainted/unstained area.  I sprayed each strip of stain in one continuous motion, and started spraying just before the wood and stopped spraying right after. 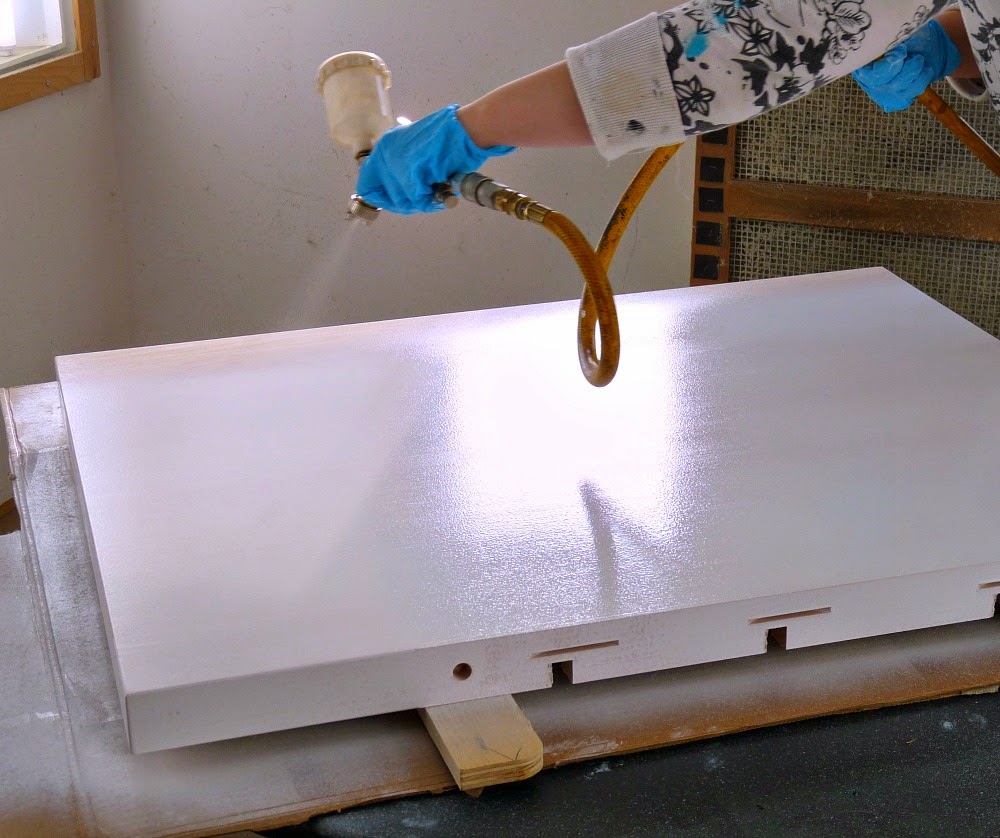 I let the stain sit a few minutes and then wiped it off with dry cheesecloth (any lint-free rag or foam brush works).  I went through a lot of cloth, and it was handy to have fresh cloth ready because the stain dried quickly. 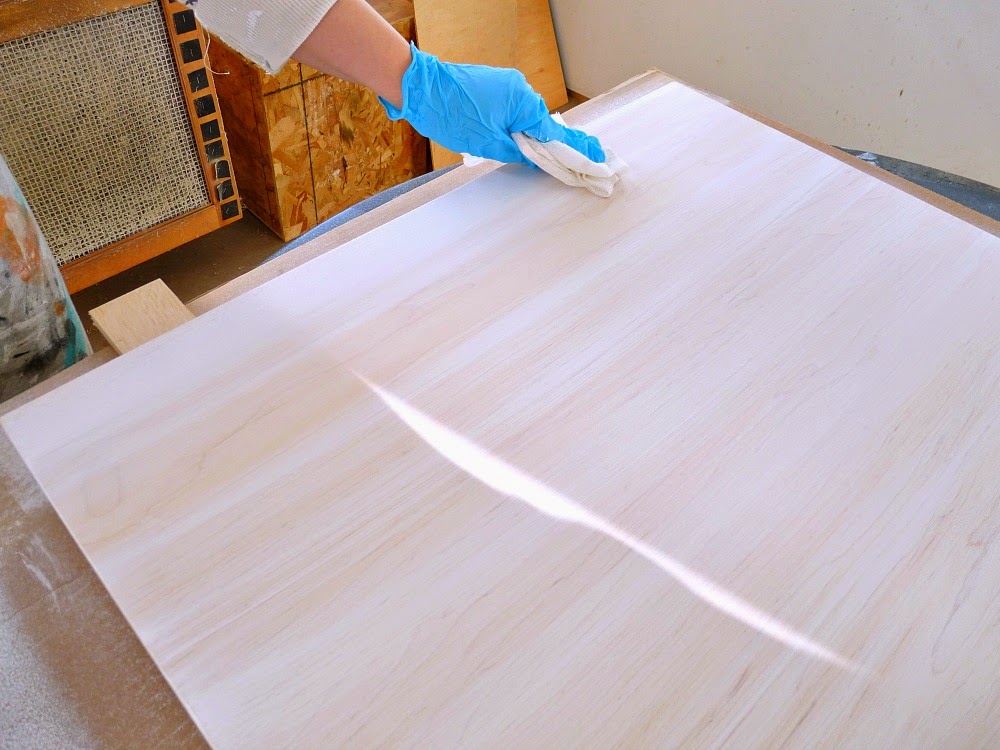 I’ve learned with stain to really wipe it off.  Like spray painting, it’s better to work in multiple thin layers than one goopy one, and even though it’s painful to watch the wood return almost back to its original state with the first coat, it’s crucial for a finish that sinks in and doesn’t look painted on.  Any time I haven’t been diligent about really removing the excess stain, I’ve ended up with streaks.  Three coats later and the counters were looking very Scandinavian.  I contemplated a fourth coat, but wood-loving Hubby and his Dad winced at the proposition, and hurriedly packed away the equipment.  They’re right: a fourth coat might have covered too much grain and just looked painted.  If we’ve got lovely wood, we should show it off.  A bit.

Applying stain with a sprayer is a great way to practice using the
equipment because it isn’t as critical to get an even coat with stain as
it is with paint.  It’s the first time I’ve used one since painting Charlie the car (Hubby used ours to paint the kitchen cabinets).  I was on the fence about using a sprayer because I was nervous about messing it up, but this method felt foolproof and was so much faster!!
It took an hour to apply one coat of stain to all of the four counter pieces, but this
included moving each piece in and out of the spray booth, applying the
stain, wiping off, and inspecting for streaks.  By the time we were done
the last piece, the first piece was ready for another coat.  I bought two 946 ml jugs ($27 each) and used all of one, plus a tiny bit of the other – I was so close to only needing one. 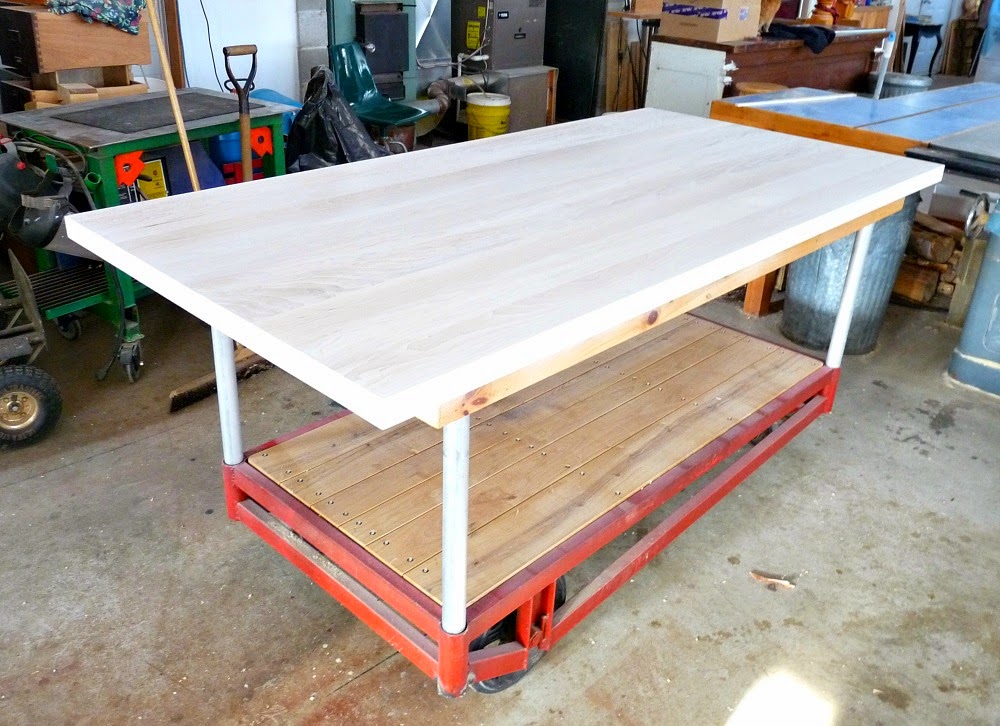 We’ve left the counters with Hubby’s Dad, who is spraying on a few coats of top coat.  He’s using the brand pictured below, which will also be applied with a sprayer (with a light sanding between coats).  He suggested a semi-gloss finish because scratches and marks won’t show up as well as they would with a high gloss finish.  This should be durable enough to be used for a kitchen counter, which will see spills and water. 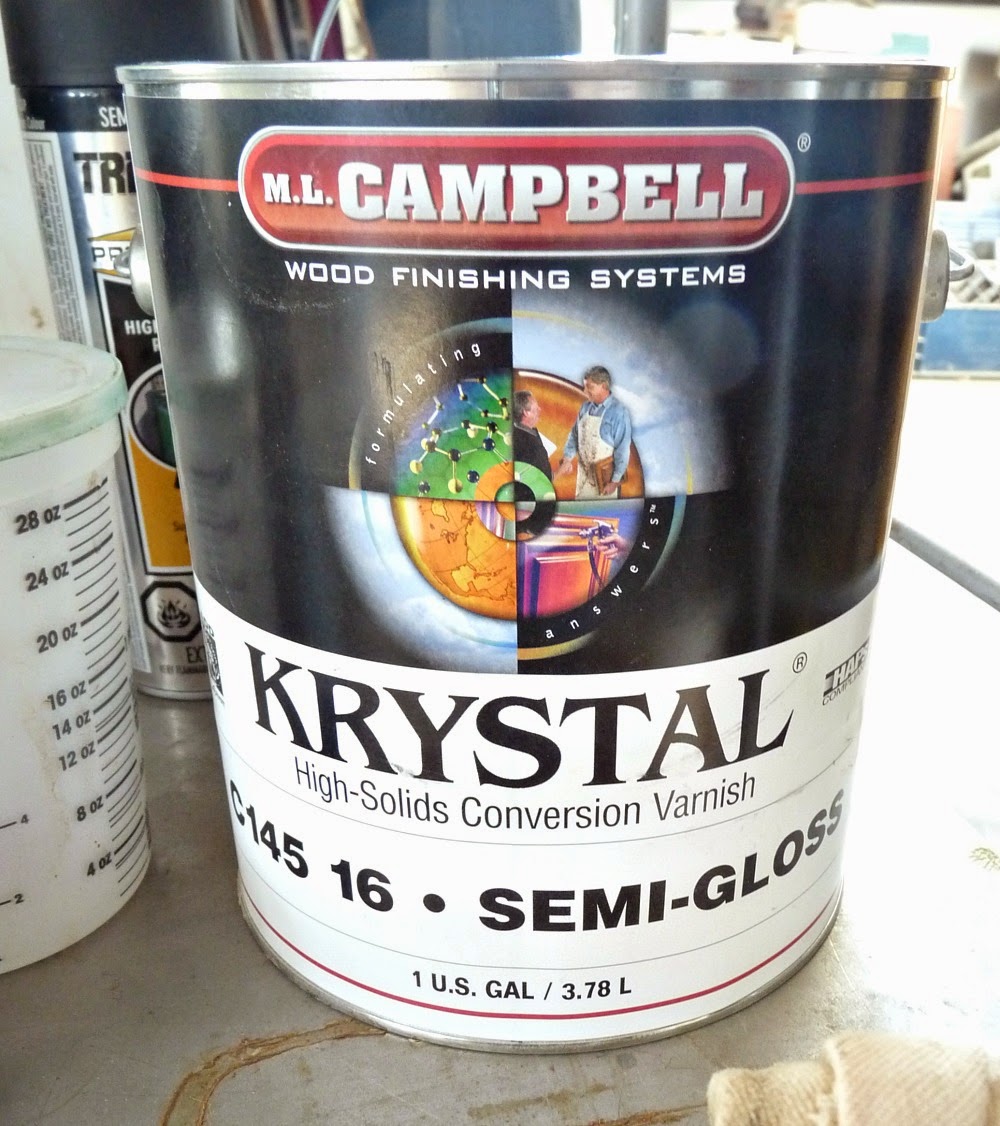 How spoiled do I feel?  Not only did fabulous, solid wood counters (seemingly) materialize by magic, all I needed to do was swan in and lay down some stain . . . I don’t even have to apply the top coat!!  Installation is slated to happen Friday, and I’m so excited!  Open drawering is overrated.