After I finished my Master’s in Philosophy, but before I began my PhD, I started a second Master’s degree but left in the first semester.  Now that I have finished my doctorate, I can say with the perfect clarity of hindsight that it was the right decision, but at the time I felt like I was floundering.  I have one delicious memory, though, that makes that lost semester totally worth it.  In economics class, our Eastern European professor was trying to explain some economic principle to us and to illustrate his point he asked the class, “well, if you had a million dollars, you wouldn’t eat Kraft Dinner would you?” to which someone replied, “of course we would, we’d just eat more“.  His total befuddlement as we all broke into song (and sang the whole thing) still makes me laugh.

Anyway, if we had a million dollars, we wouldn’t have cheap plastic tub surrounds, would we?  Of course we would, we’d just have more!  This house, also on Lake Superior, is listed for a cool $998,500.  The design is said to have been inspired by Frank Lloyd Wright, and built 17 years ago.  Here was my reaction as Hubby and I scrolled through the listing photos:

Someone loves purple as much as I love turquoise!  Hey, we need some Adirondack chairs. 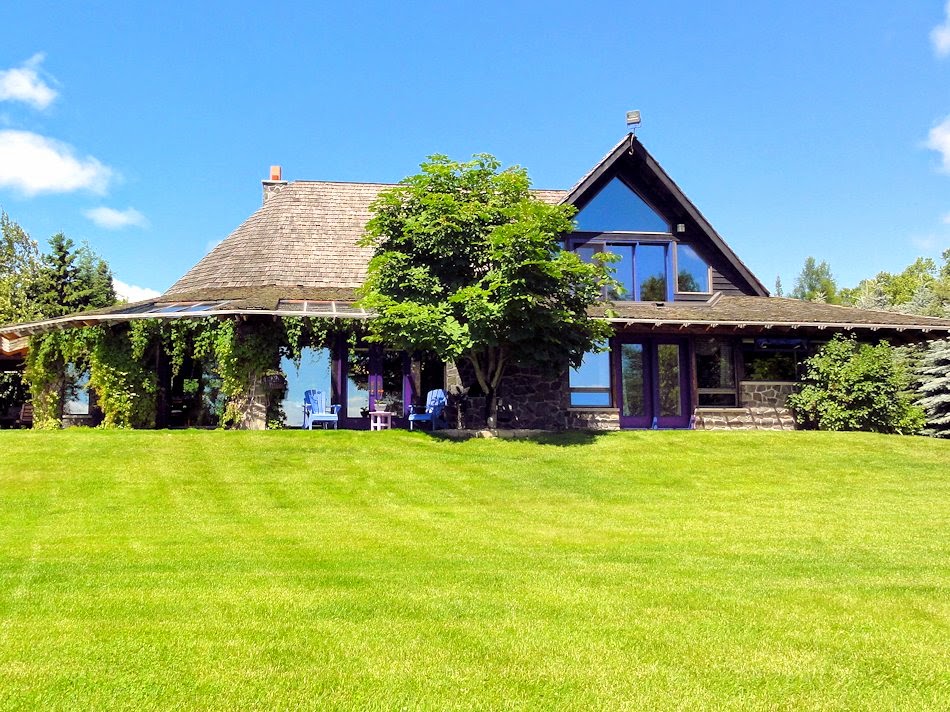 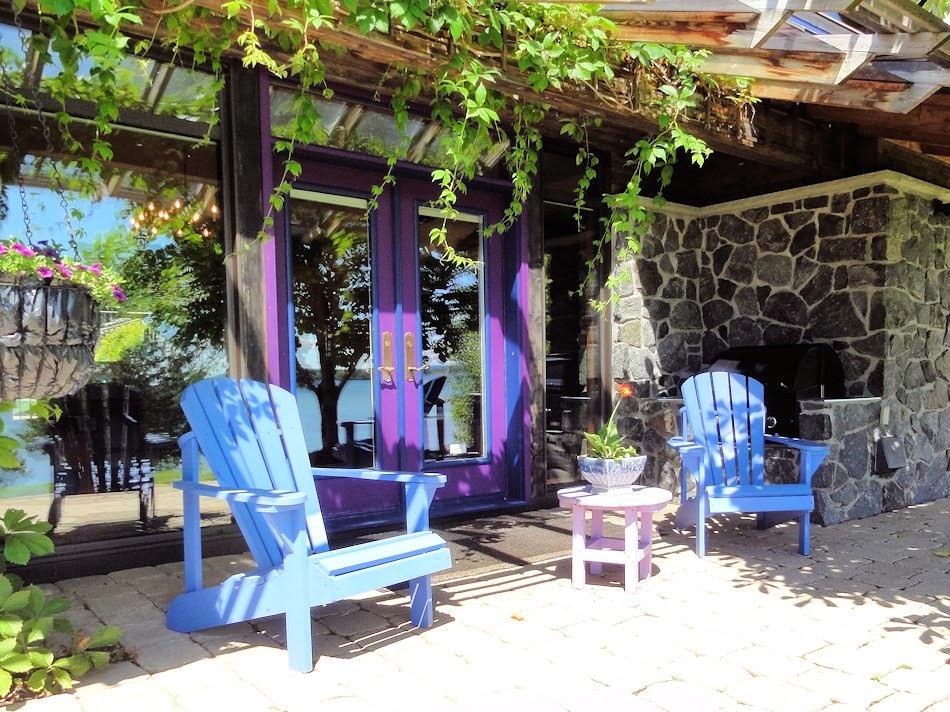 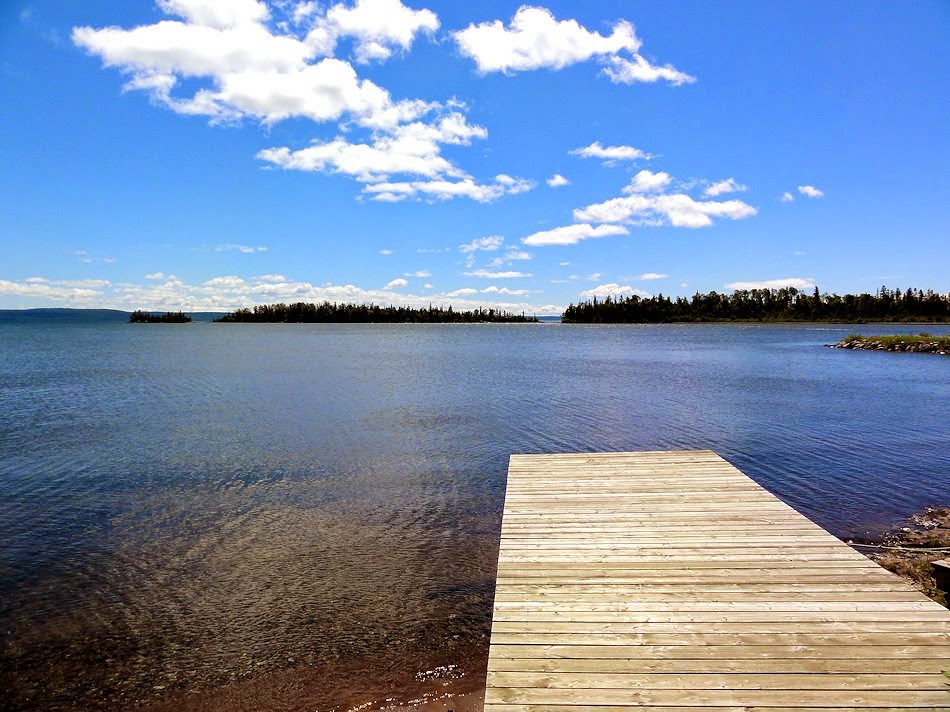 The front entrance has a kind of commercial feel, doesn’t it?  It opens right into the kitchen, and with that raised area in front of the sink it feels like the receptionist’s desk at my dentist.  With almost 3,000 square feet, I’d expect a little distance between the front door and the kitchen. 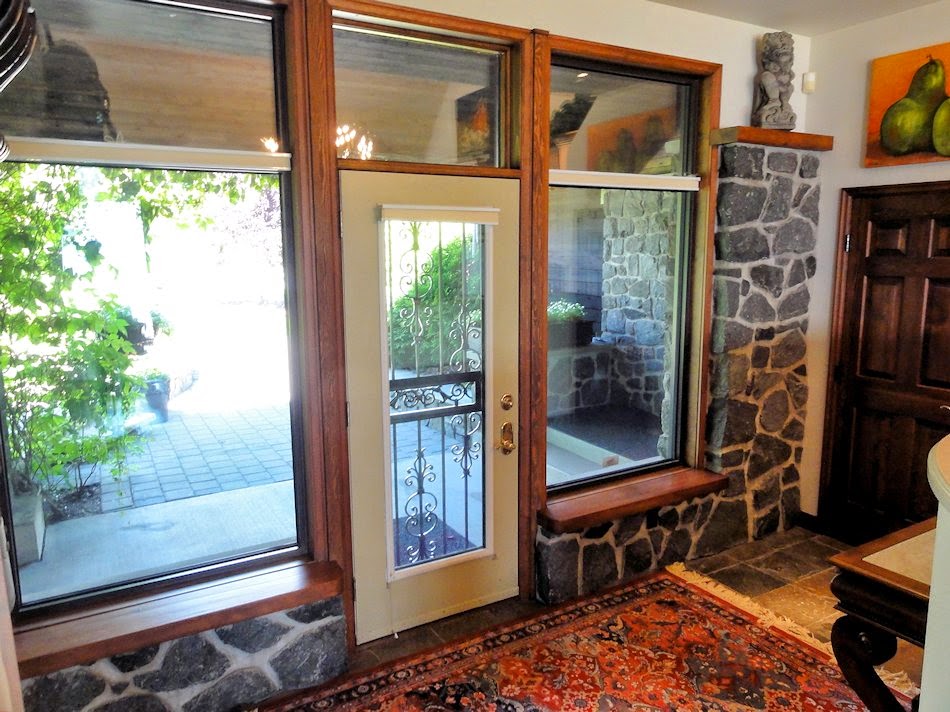 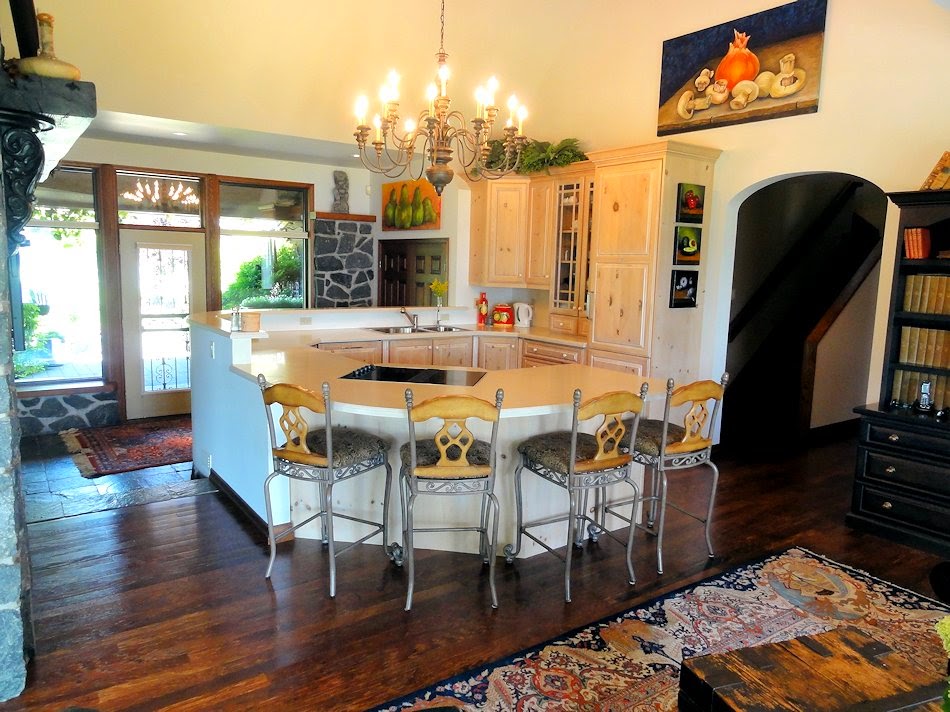 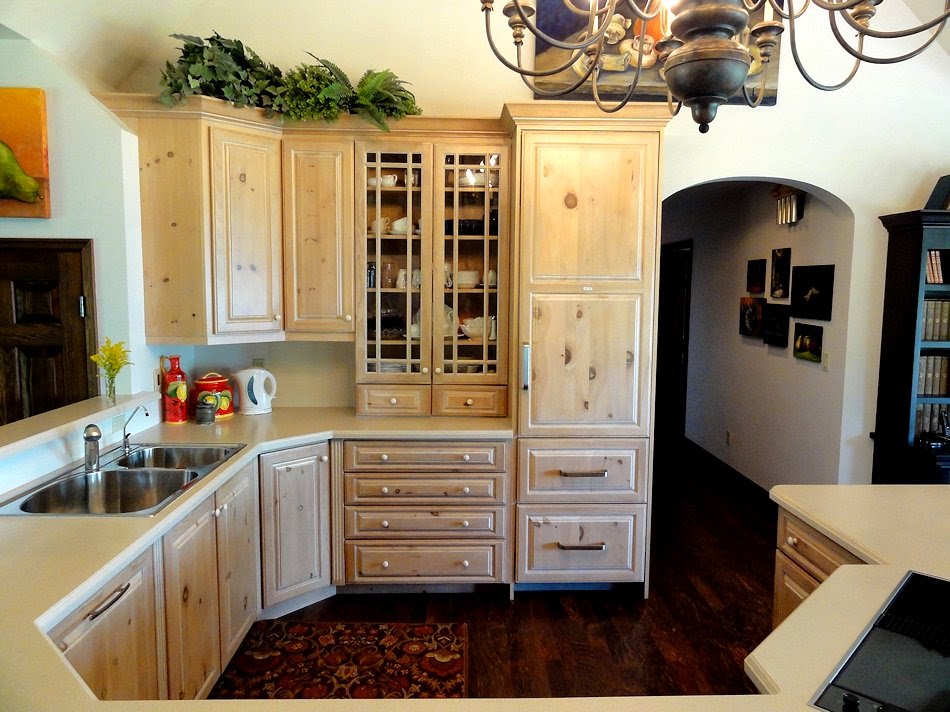 I think I drank the kool-aid . . . the knotty cabinetry seems strangely appealing.  With light marble counters, pale grey subway tile backsplash, and new hardware it could work without lifting a paint brush.  Or maybe that’s just the part of my brain totally sick of painting talking?

Hey, I want a cozy library like this, with close proximity to snacks and a view of the lake. 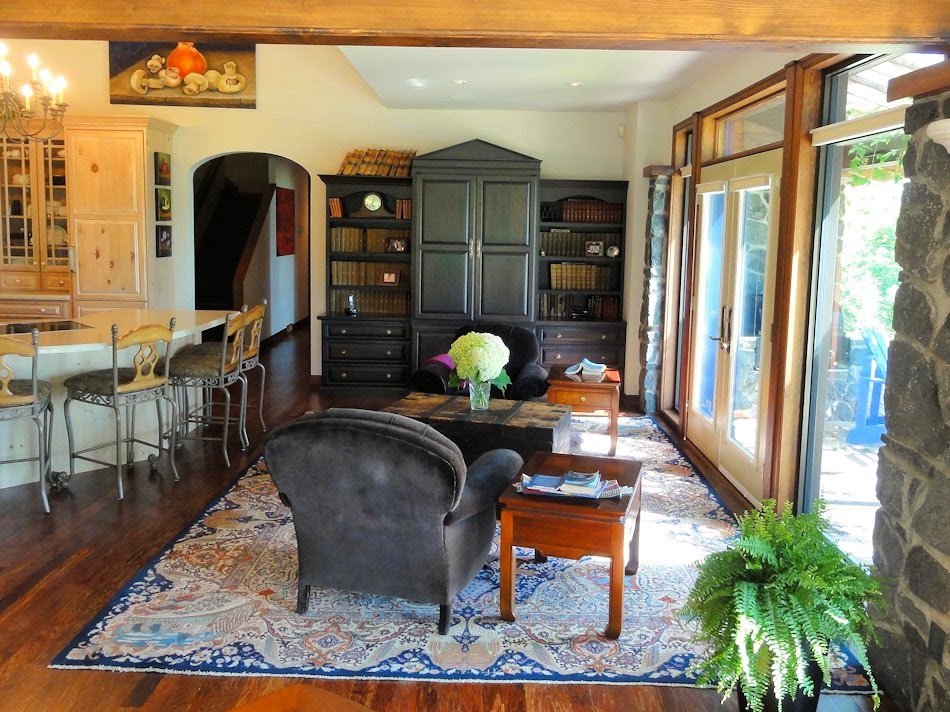 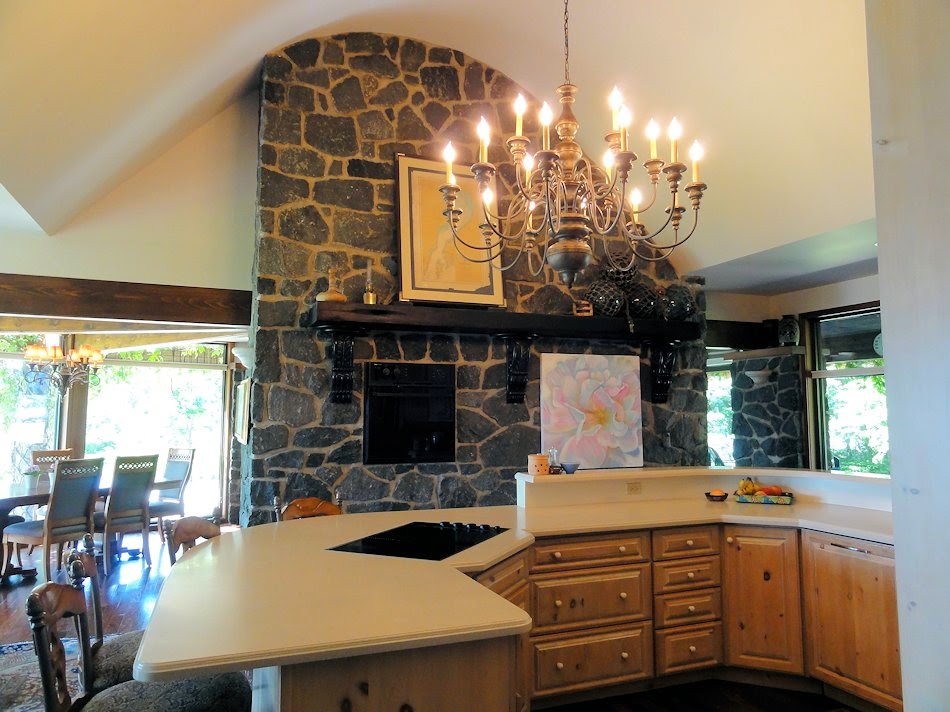 The floor to ceiling windows are incredible. 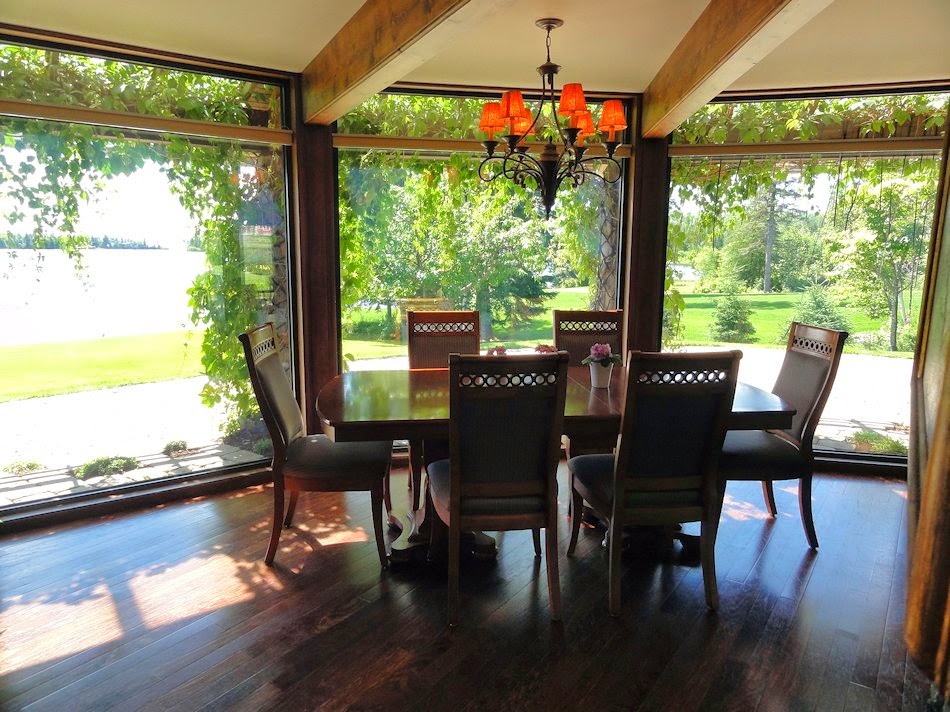 The throw looks like it’s trying to escape.  Does the home stager know it’s not supposed to literally be thrown onto furniture?  I cannot get over how many gorgeous windows there are. 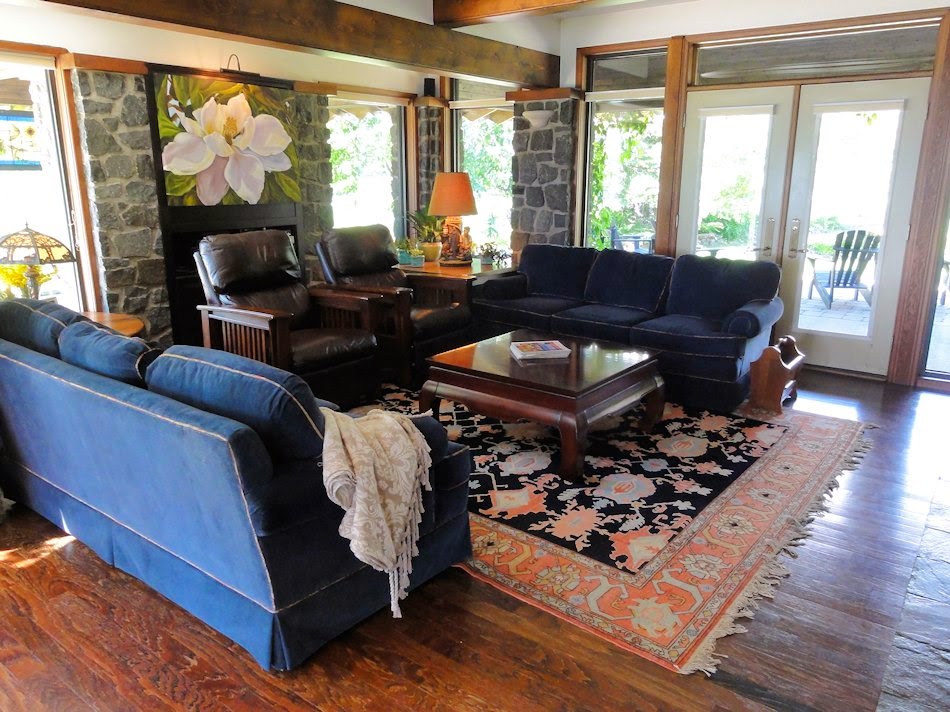 Okay, lots more wood.  The Hickory wood floors are amazing because they lend an upscale rustic feel, but the wood beams make the ceiling feel really low – I’d want to paint those out.  You want to look out, not up.  Why do the people who design lakehouses in this area think that combining a dozen different kinds of wood is a requirement for lake living? 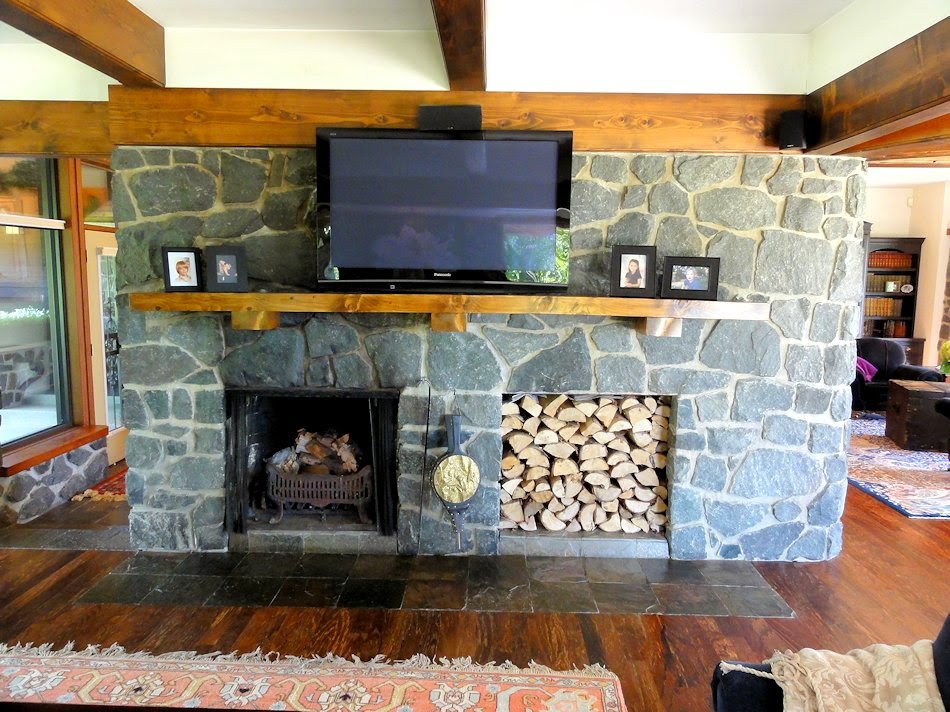 It’s a great size for a master bedroom, but I can’t not look at the man.  Is he changing his underwear?  Is this some really famous piece and I’ve now revealed how uncultured I am? 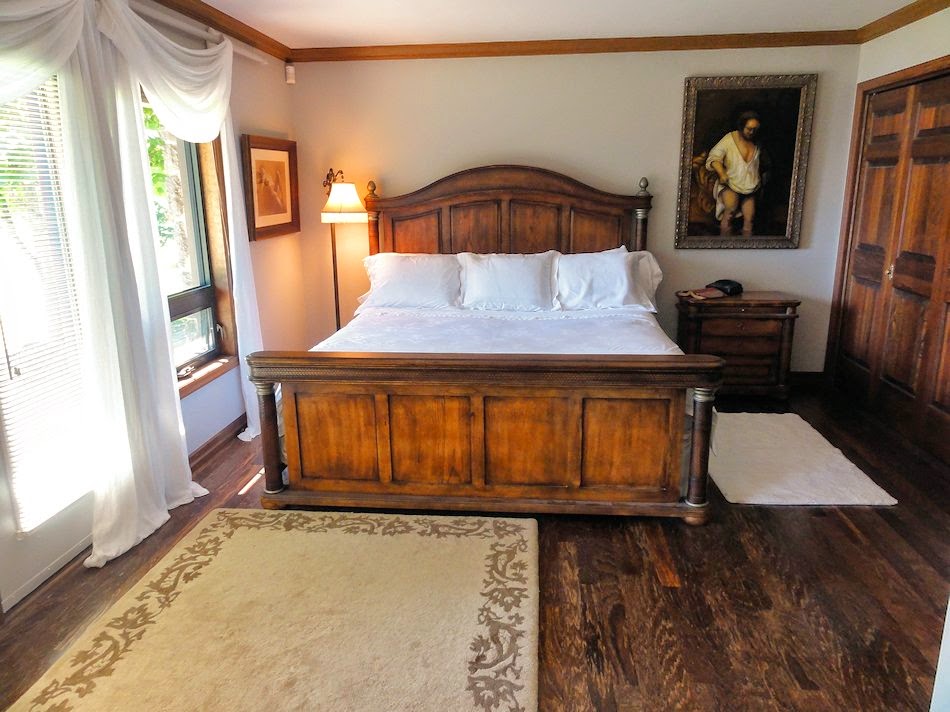 Master ensuite has lots of storage and insane view of the lake.  I could live with this!  Gold faucets like these make it hard for me to love the brass that’s in again.  Yes, today’s brass has more modern shapes and cool matte finishes, but I have too many awful memories of 80s decor.  I’ll appreciate the trend from afar while I desperately clutch at the last remaining brushed silver anything I can find. 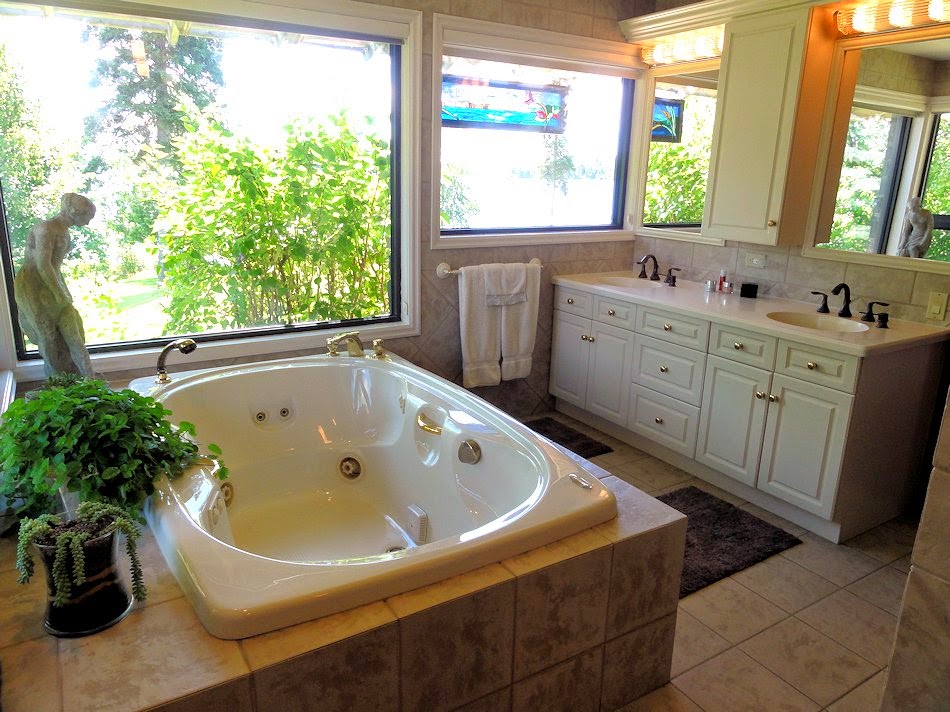 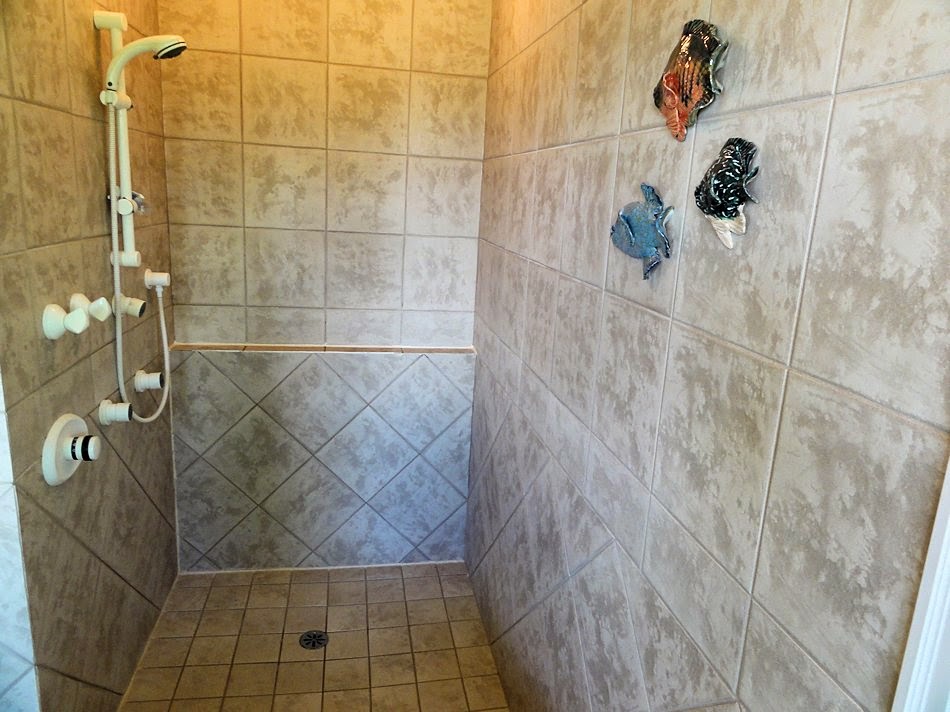 In the second bedroom, another throw makes a mad dash for freedom. 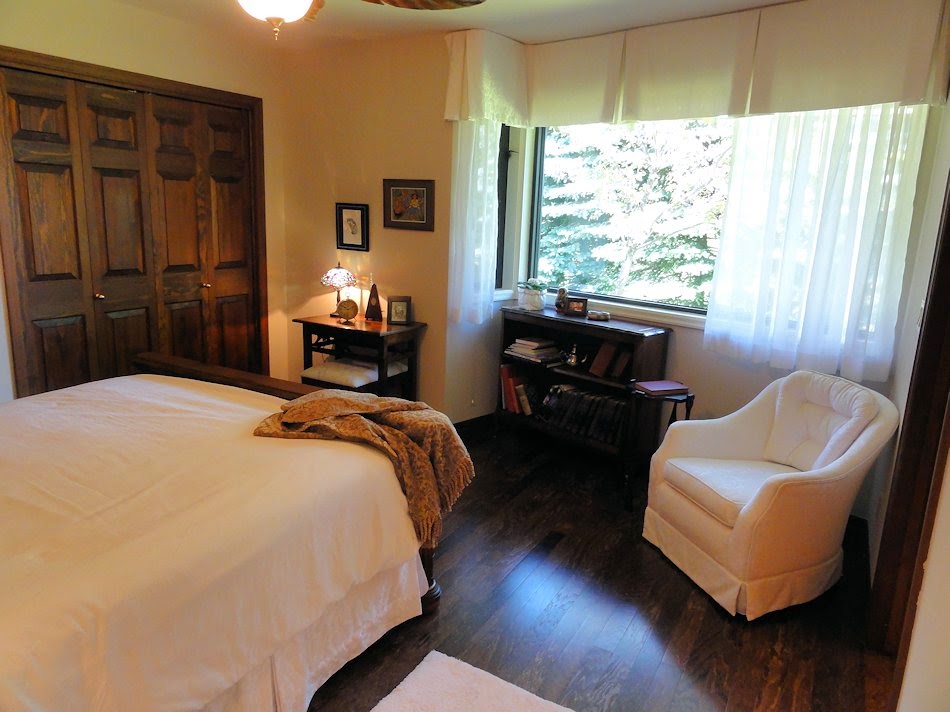 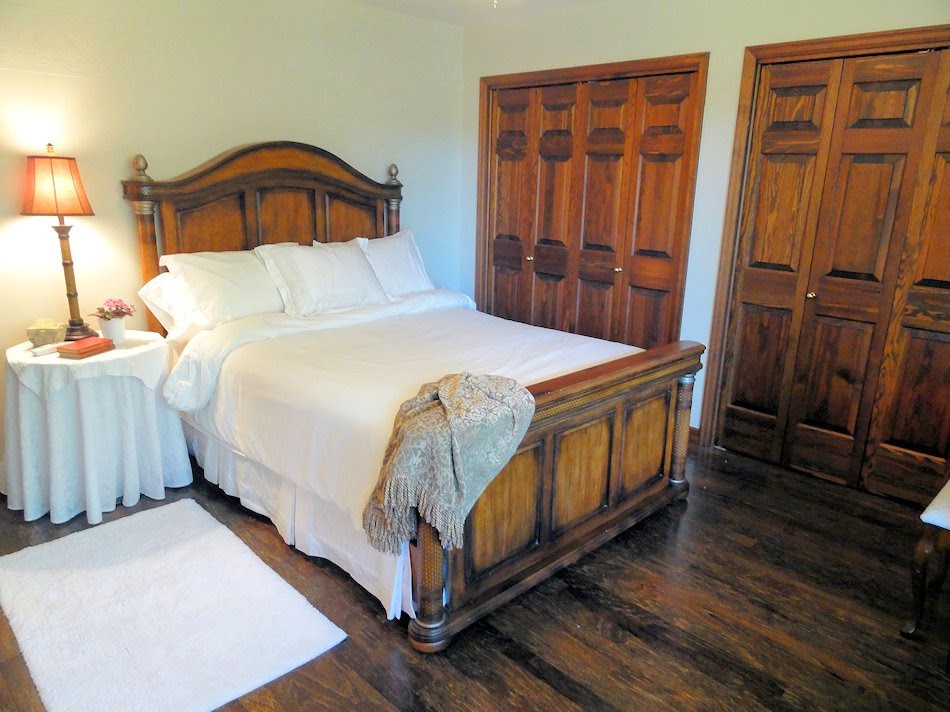 The second bedroom (and third bedroom) have ensuites!!  Fancy.  But what a let down with the cheap shower surround instead of tile.  It’s like ours, minus the portal doors.  Is there a reason this is so popular here?  Is there a checklist?  Plastic shower surround?  Check.  A variety of wood species?  Check.  The tiniest kitchen ever, and let’s make it a u-shape so it’s even squashier?  Check.  [I ran with this bit for a while when I was making my commentary to Hubs, so you’re welcome for editing it here]. 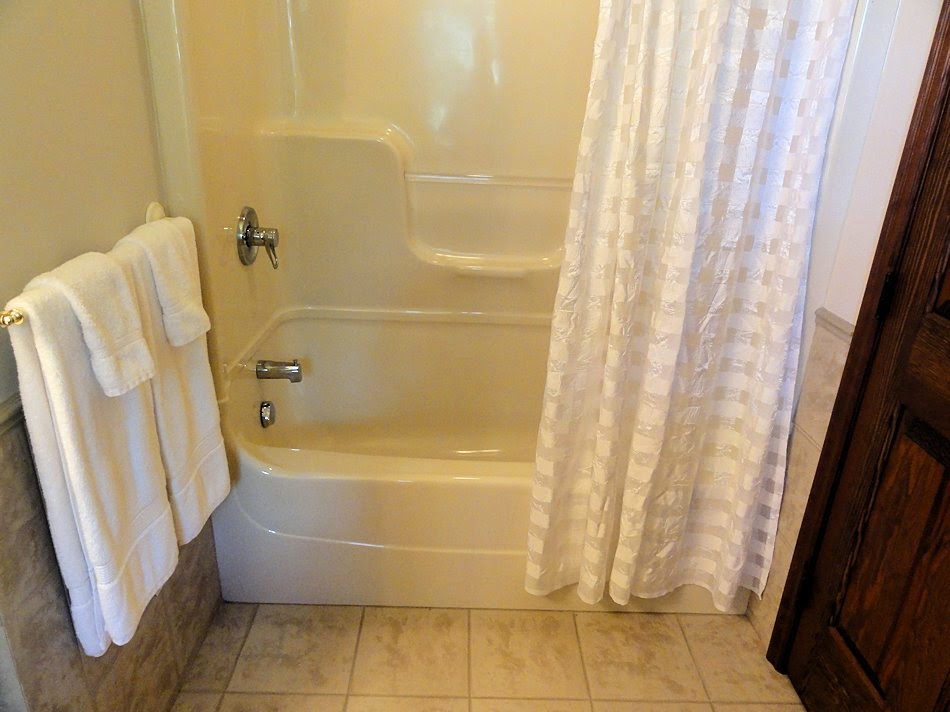 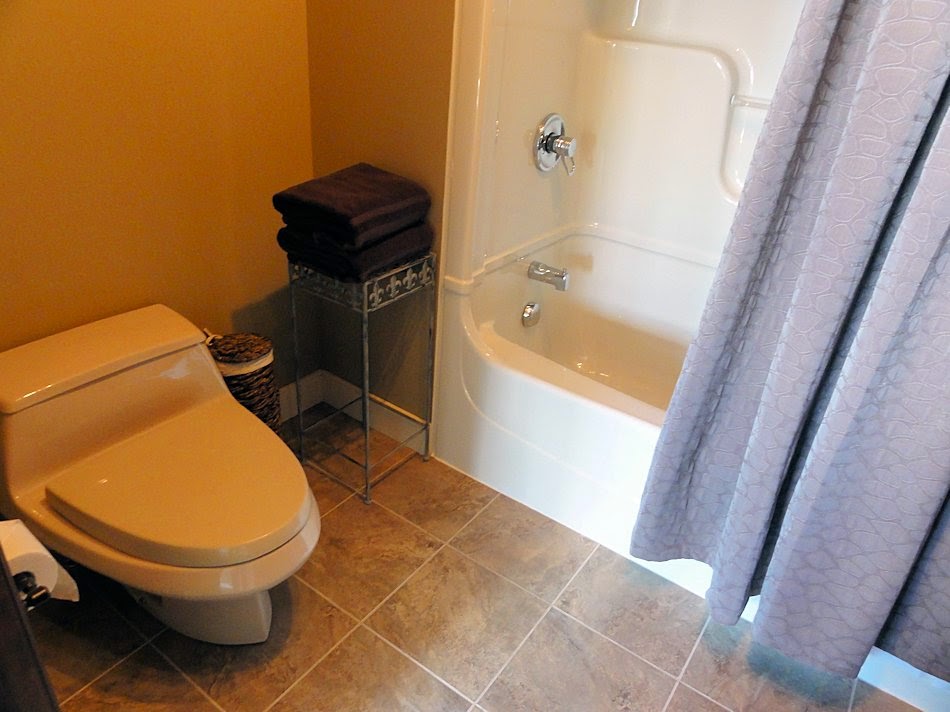 Yup, we’re officially painting the exterior of the house an almost-black grey.  It looks cute on their shed, which is probably the size of our place. 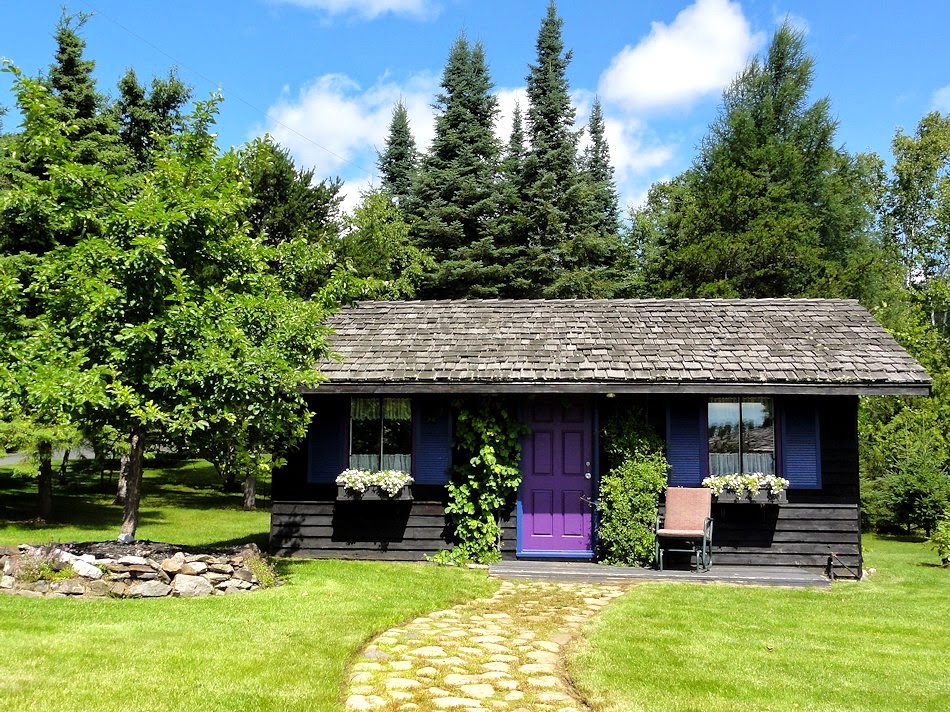 I’m so happy some of you expressed an interest in seeing other Lake Superior homes.  I certainly appreciate the company because it feels less like snooping if we’re doing it collectively.  I don’t plan on making this a regular feature, but there will be a few more to share as they pop up on the market for the season.  I dipped my hands in the lake the other day (my feet were ensconced in boots).  It was cold, but not pneumonia-cold.  I plan on swimming June 1st, come hell, high water, or blizzard.