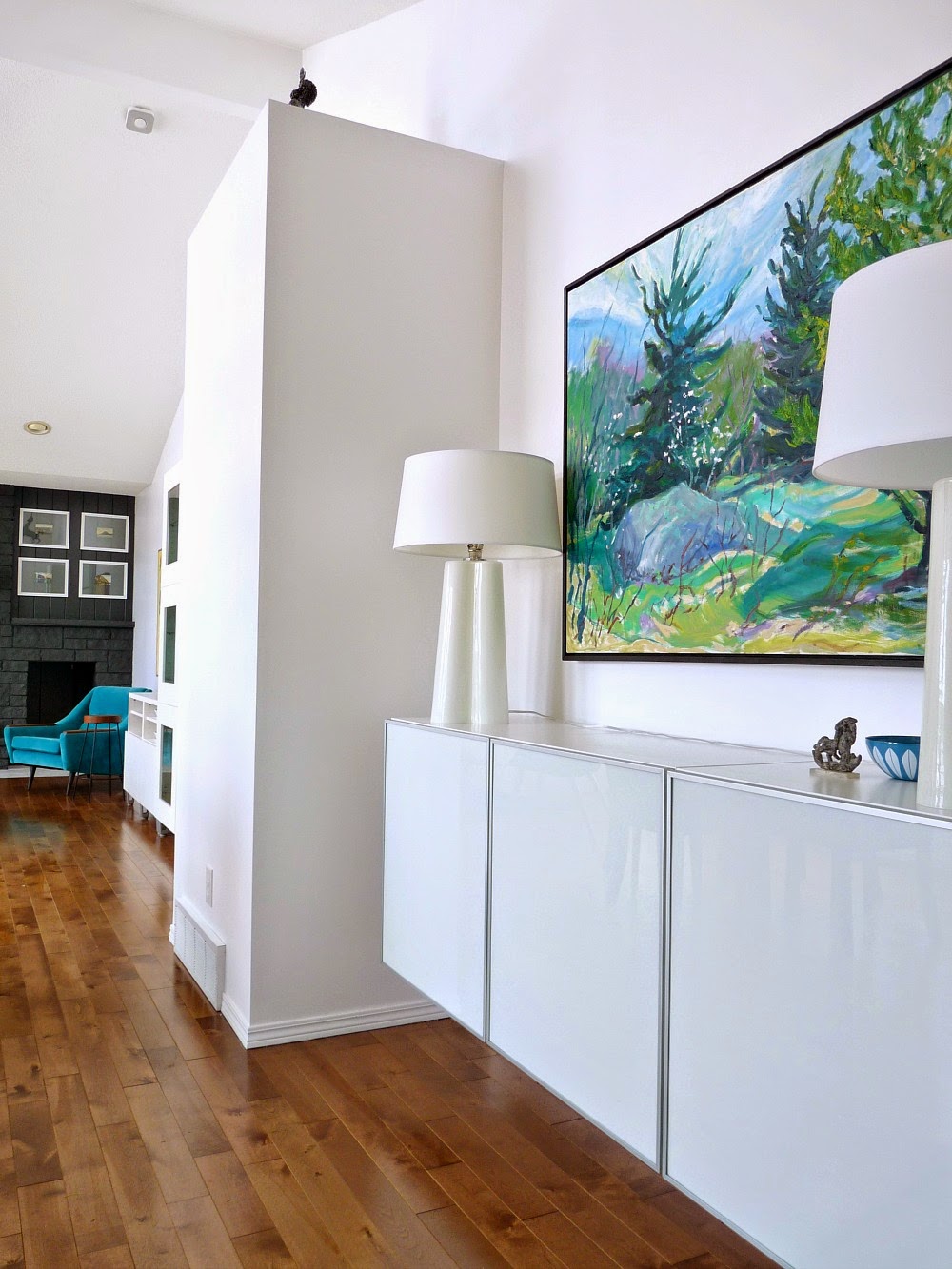 My life outside of blogland is a real ego boost, because everyone thinks I’m a genius.  My father-in-law and his wife visited Hubs and I for dinner a couple of weekends ago and spotted our (still topless) floating Ikea “credenza”.  They were smitten with it, and thought it was the coolest idea ever.  How on earth, they wondered, did I come up with such a clever idea?!?

I didn’t (but they don’t need to know that).

I first spotted the popular floating credenza made of Ikea cabinets on Made by Girl (left), but it’s the version I saw more recently, on Almost Makes Perfect (right), that made me really want one for the lakehouse dining room.  I think it’s the addition of the waterfall top that made me really love this idea, because it fully hides the Ikeaness of the Ikea cabinets.  These two versions of the same project highlight the longevity of this trend: Jen tackled hers back in 2009 while Molly’s is circa 2013. 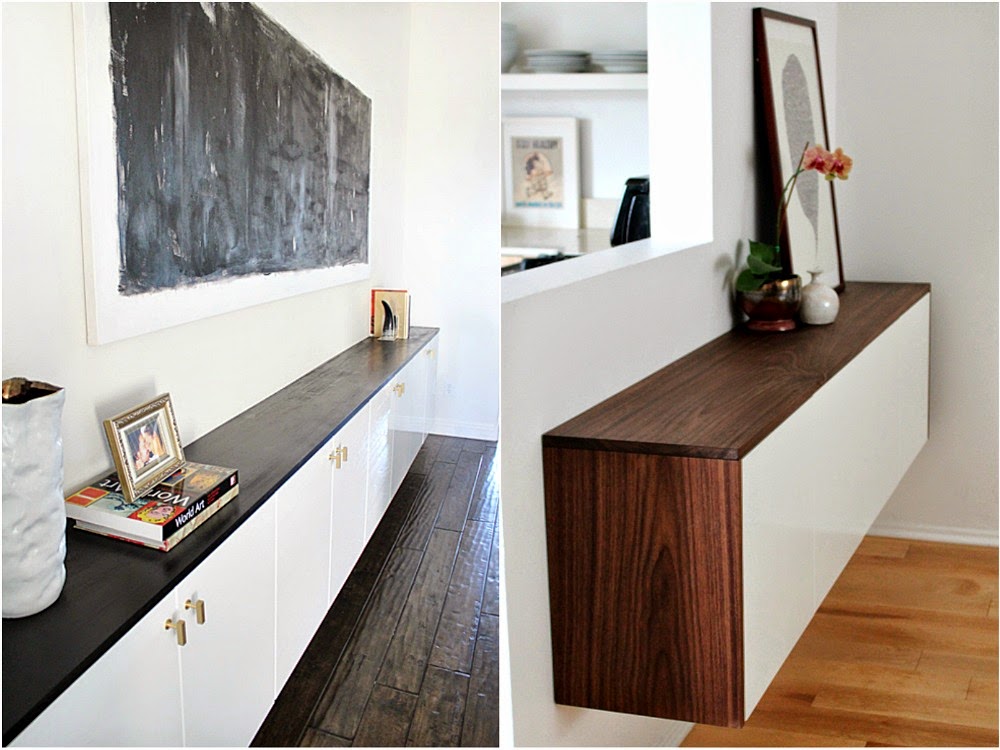 The Brick House wowed me with the longest credenza, as well as introducing me to the origin of the word “fauxdenza” – the name for this idea, coined by Anna of Door Sixteen. 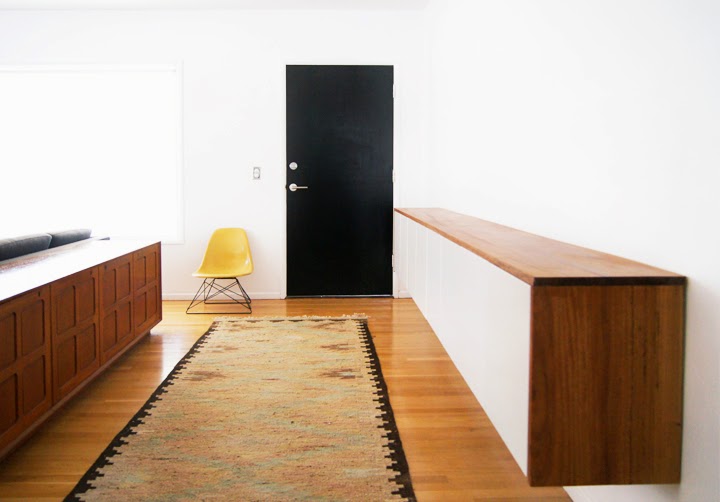 Speaking of Anna, this is her floating credenza. 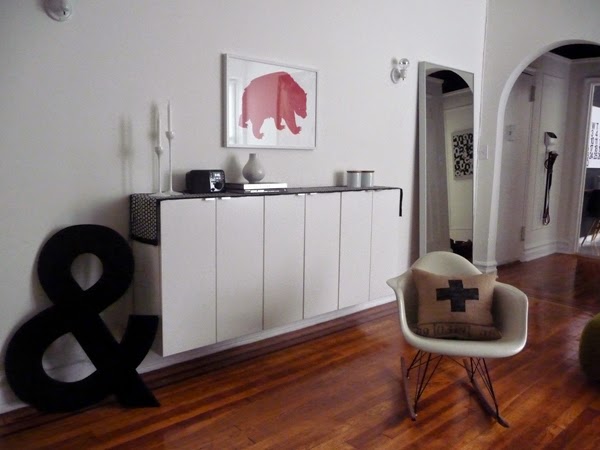 The idea has become old news in blogland, but, like my father-in-law, I still think these floating credenzas are incredibly clever (easy cleaning!), plus they look so sleek…

Yep, fashioning a floating credenza from Ikea cabinets topped with wood is definitely not a new
idea and certainly not mine.  Now that the kitchen is done, we finally have some time to create a top for ours (just in time for them to be unfashionable?), and I’m so excited.  I’m deviating from the dark-stained trend and opting for a glossy pale  grey stain.  I have yet to spot one with a top that isn’t a natural wood tone, so hopefully this will be a new spin!  Corralling this parade of credenzas is just what I needed to get motivated – that, and the prospect of hidden lamp cords…

P.S. I’ve been busy with the computer shop makeover that I blogged about and shared on instagram (#computershopmakeover).  I spent days painting the walls and floor of the worn out rental the owners had chosen (take a look at my fabulous floor makeover here), and then, to my chagrin, I was informed that the deal had fallen through and they were moving up the road to a different retail space!  It’s a good move, it really is.  In the new location I’ve been painting furniture and have even been commissioned to paint some artwork.  Apparently I’m a one-stop shop because I am also heavily involved in their physical move.  That’s what happens when you drive a 3/4 tonne truck.  I need this shirt.  I’m not sure I’ll really have any “before” and “afters” of the space because it was pretty move-in ready, but I might share a project or two.  In any case, I’m looking forward to next week when the move will be complete and I can focus anew on the lakehouse.  Did everyone spot my trunk full of exterior paint…?