I have good news and bad news.  The good news: the turquoise kitchen is done, and it looks amazing.  It exceeded my expectations and I’ve been spending my days staring at it wistfully.  Every now and then I sigh, in a decidedly contented way.  The bad news: I spent some time last week trying to photograph it, with little success.  I’m not sure if my six year old camera is slowly dying or if I’ve forgotten how to use it, but it’s taking really grainy shots – plus it’s really fighting me when it comes to capturing aqua true to life.  By Friday I gave up, and Hubs and I spent the day in Duluth, MN.  He will be working on my 30th birthday next week, so that was our celebration: a full day of thrifting and antiquing across the border (all I found was this turquoise pyrex piece and a blue McCoy planter, but the mini road trip was so much fun).  I’m going to try to photograph the kitchen again today, but in the meantime I wanted to gab about a key piece of kitchen furniture, and provide a review of Modernica‘s customer service. 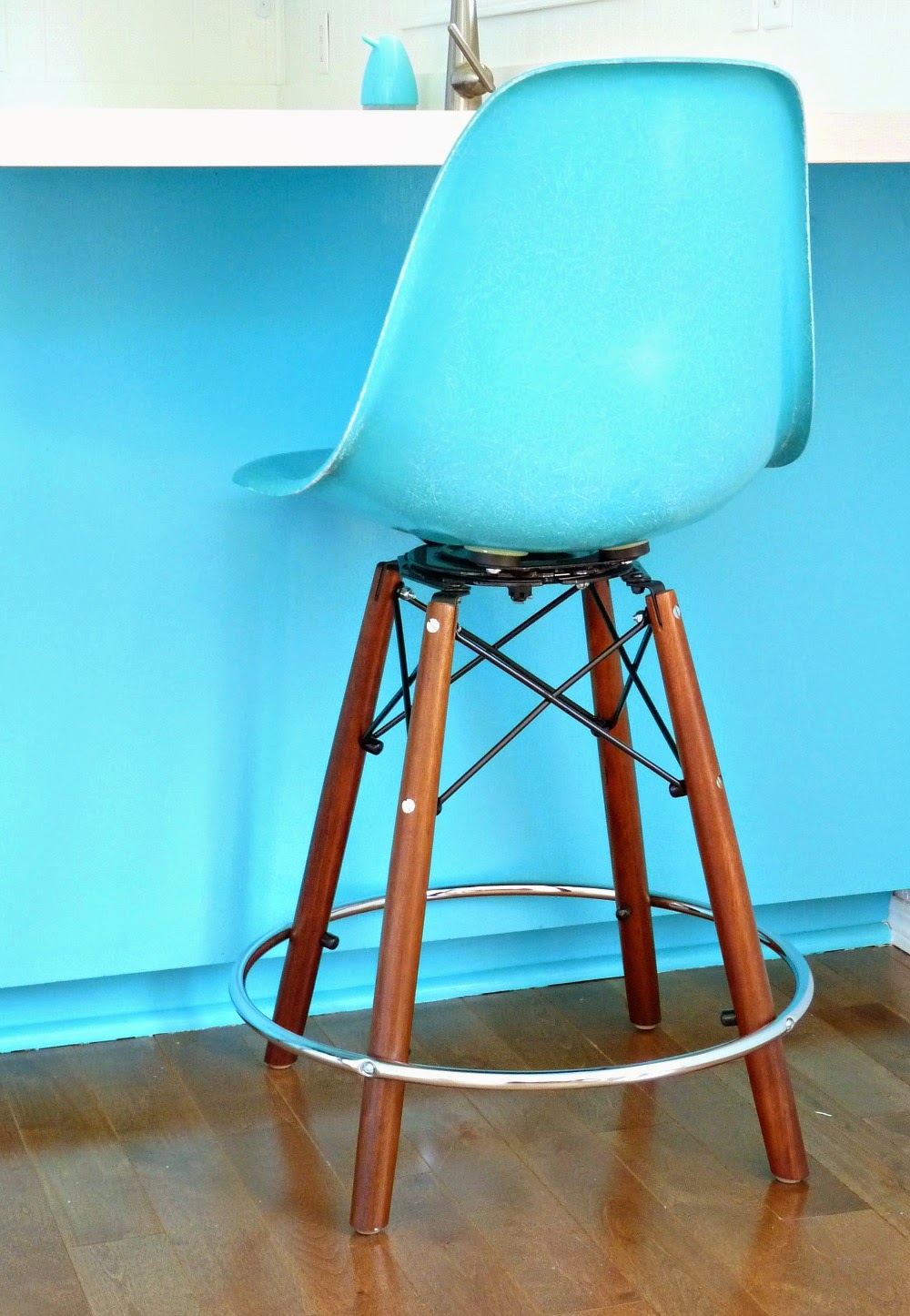 Surprise!  The hard and uncomfortable wood stools left with the lakehouse were the first thing to sell at a family yard sale recently.  I’m so happy to have replaced them with something that looks, and feels, much better.  When Modernica had their 15% off sale I bought the triple bubble lamp fixture you already saw, as well as two fiberglass shell counter stools.  These were also part of my original plan, but I ended up ditching the gray.  I really liked the diamond blue shell colour that was a limited edition with different legs, so I emailed Modernica and asked if I could combine the diamond blue colour with the dowel counter stool swivel base.  Surprisingly, yes!!  They promptly added my preferred colour choice to the website and … voila: 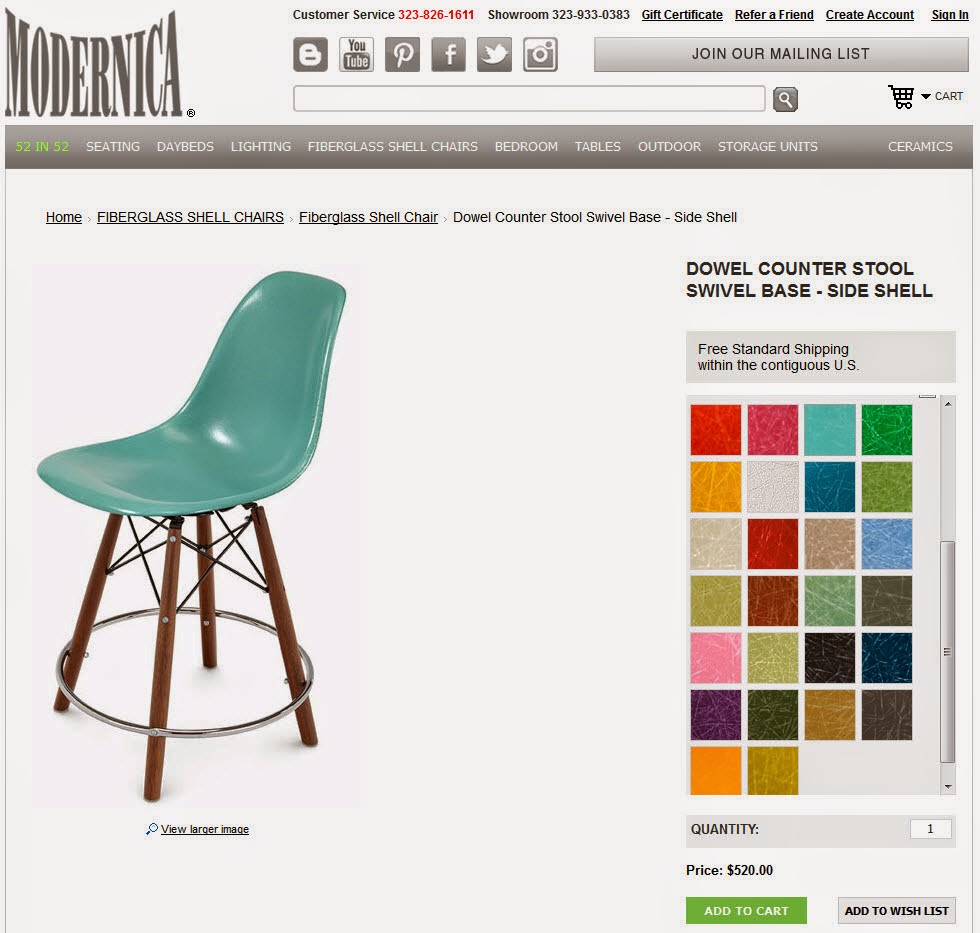 Fiberglass shell chair, solid walnut dowel base, and the perfect aqua hue (I found their standard turquoise – Ocean – to be far to blue for me).  And here is the pair at our smashing DIY solid maple kitchen counter: 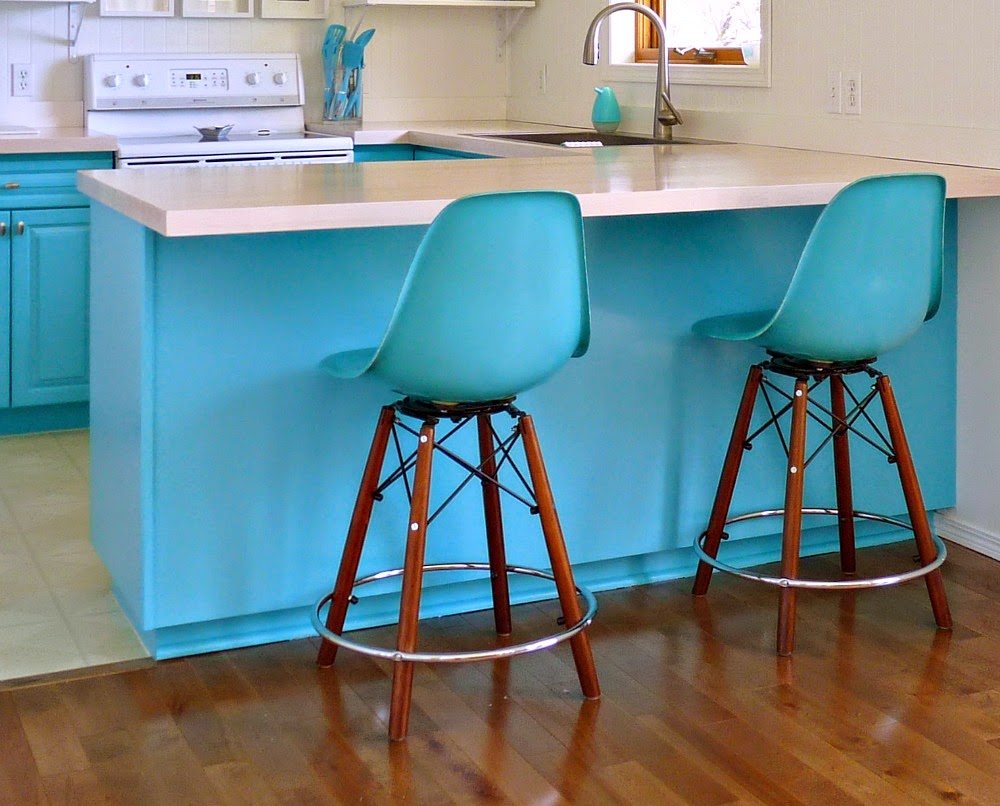 Sadly, my experience with Modernica was not completely awesome.  The moment we opened the box, we noticed that one of the shock mounts had slipped during the gluing process and did not align with the base so it could not be assembled. 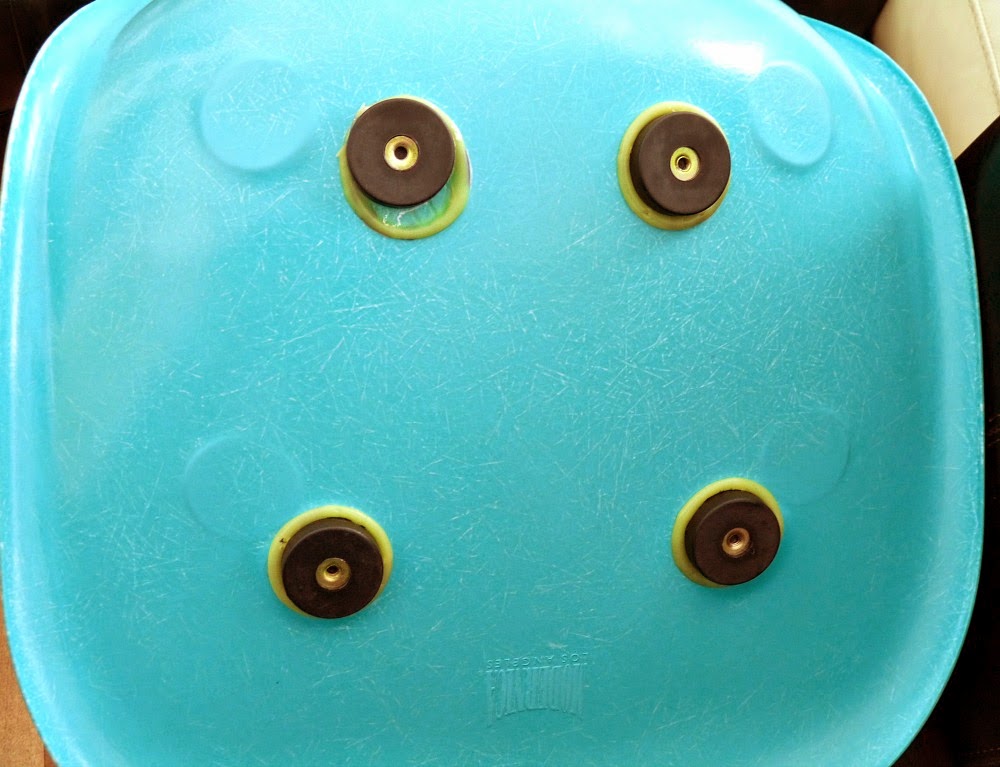 I contacted Modernica right away and received a cool request for photos to ascertain the problem and determine if they could/would help me.  After I emailed the photos, the process picked up speed a little bit.  They sent me a shipping label via email and instructed me to return the shell in the same box I received it.  Sadly, the replacement fibreglass shell that came was very different from the one I sent back – the colour is a bit lighter and the edges are very white.  I understand that irregularity is part of the process, but the first pair were perfect for each other because they were similarly irregular (if that makes any sense).  I just didn’t want to go through the hassle of returning it again.  I don’t notice it as much anymore. 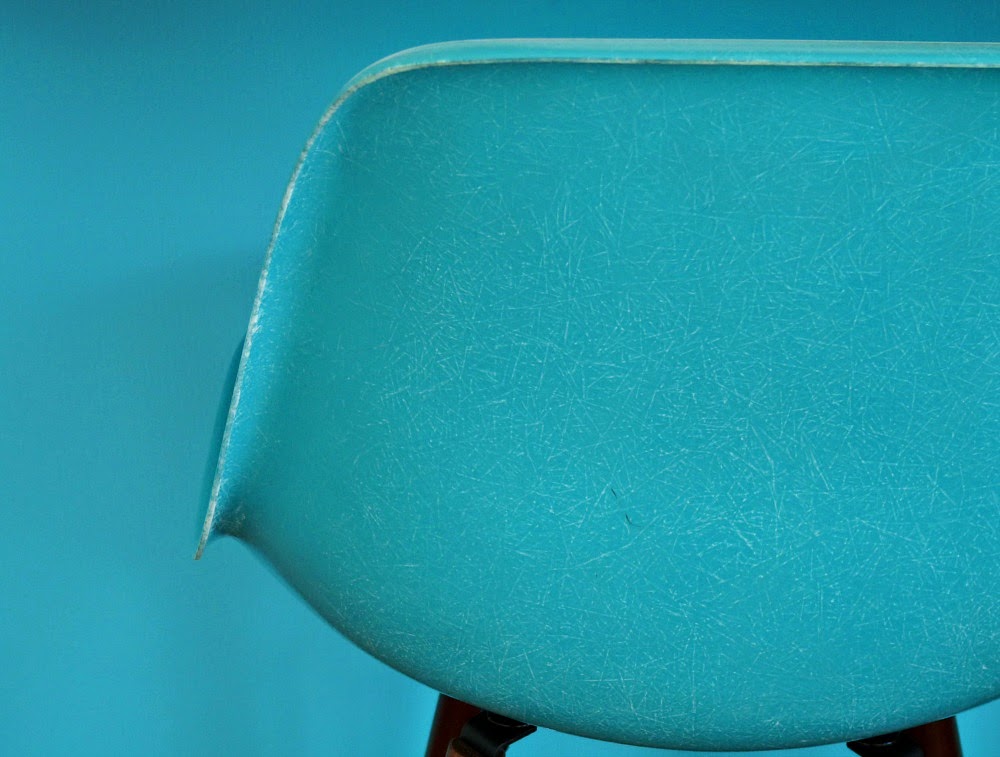 Hubby asked me if I would order from Modernica again.  Hmmmm.  Good question!  I LOVE our lights and I would probably want them again if we ever moved.  I was thrilled that they agreed to a custom combo on the stools for me, but they were a little nonchalant about my defective shell and did the bare minimum there.  The stools look good, but now that I’ve seen the real deal I think the construction is a tiny bit sloppier on the repro, especially concerning the adhesive used on even the properly installed shock mounts.  But, other than that, they do seem well built.  The bases are incredibly substantial and heavy enough to prevent any
tipping, even after enthusiastic spinning.  The solid walnut legs are
beautiful and the chrome accents gleam.  There are these little plastic caps that refuse to stay put, but I think a little sticky tack can solve that.  They suit the look I’m trying to achieve in the lakehouse and even though they aren’t licensed reproductions, I’m convinced of the authenticity of the production (there is some debate).

Ultimately, I can excuse the flaw because they are handmade, in America, and that’s a beautiful thing.  I like supporting companies that keep jobs in North America, and I can forgive an assembly flaw.  Plus, they made something just for me, and that’s pretty special.

Comfort-wise, these stools are pretty phenomenal.  The seats are shaped so that you slide and sink into them.  Even without padding, they don’t uncomfortable because they follow the shape of a body.  Happily, they are generous enough for wider bums.  Szuka has even taken to them, licking them, using the foot rest as a head rest, and doing whatever this is: 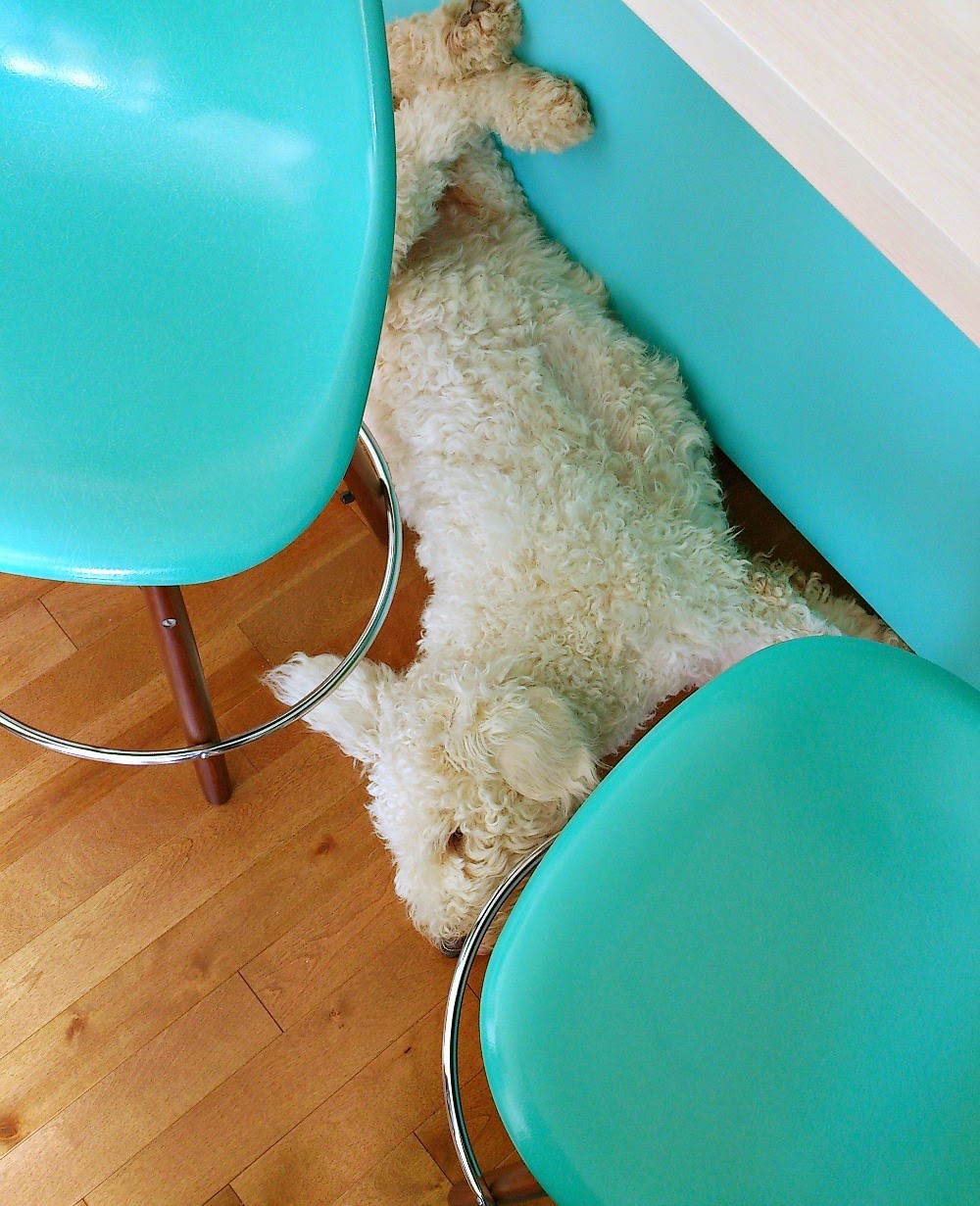