It’s embarrassing to admit, but when we first moved from the city to our rural lakehouse, I was scared out of my gourd.  The woods – at night! – tops the list of my irrational fears.  A lifetime of scary movies has taught me that bad things happen in the wood at night.  Shortly before the move, we started watching The Walking Dead, and that’s when I learned that the woods can be terrifying during the day too.  The episode in which Hershel’s idyllic, country farm is overrun by walkers hit a little too close to home and that’s when I stopped watching.  Only recently have I been able to come home in the dark without spending half an hour parked in the driveway, petrified with fear of what’s lurking outside and trying to screw up the courage to open the door.  I can now stand on the deck at night while Szuka does her evening perimeter check/pee, instead of cowering inside with all of the lights on.  When something goes bump in the night I’m not immediately drenched in sweat, certain that my untimely demise is imminent.  Despite the bevy of irrational fears that have shaped my experience of country life, I haven’t – until recently – been afraid of more plausible threats, like bears.  I’ve seen black bears, here and there, but I always felt safe in my backyard because black bears, we’re told, tend to avoid people.  Predatory black bear attacks, although horrific and gruesome when they happen, are really very rare.  Still, habituated bears – those that are accustomed to humans and aren’t afraid – are worrisome.

Recently I shared a photo on Instagram of one of our apple trees with a branch ripped almost clean off.  I suspected a bear, and it was confirmed last week when a neighbour anxiously banged on our front door to let us know a bear was in our apple tree, high among the branches, and refusing to budge.  He eventually ran off, but she was really concerned by how unfazed he was by our presence. 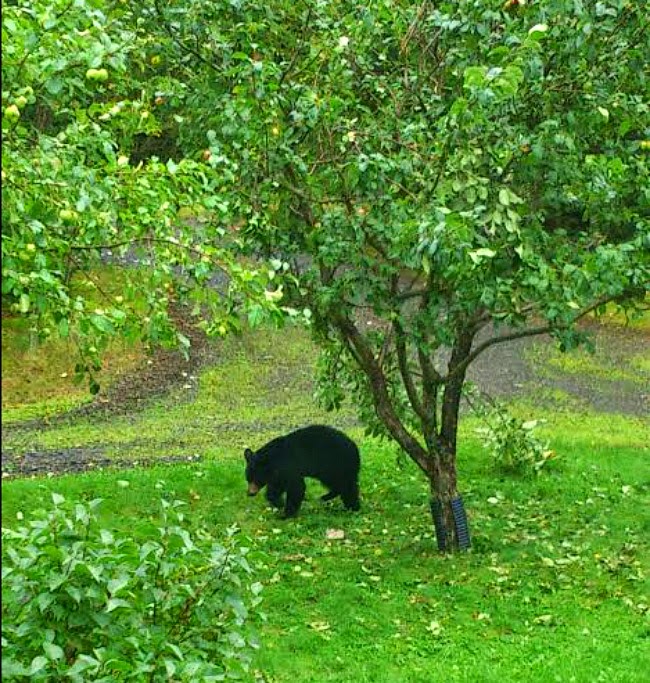 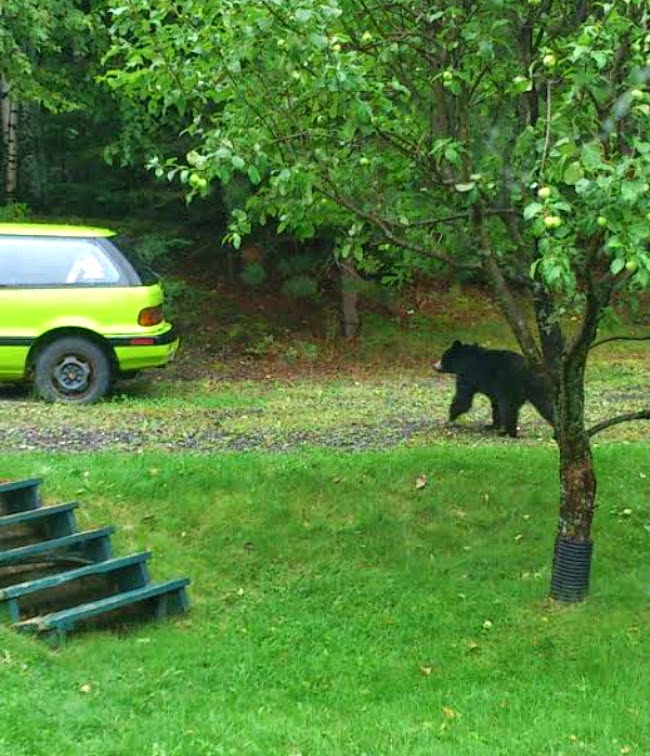 The neighbour told me someone else in the area had been confronted by a giant, 200+ lb black bear, who determinedly, yet slowly, approached her while she was out walking.  She in turn slowly backed away but he followed, so she tried to make herself big and tall and noisy but still he confidently moved toward her (probably not unlike the curious bear in this video).  He was only scared away by a passing truck.

This description sounded eerily like what might happen before a predatory attack.  For the first time, I became afraid of what’s actually lurking out there, in the woods.  I felt somewhat safe because Szuka is always by my side (and she’s a big girl), but then I read that dogs can be the worst around bears: some run up to a bear and nip it,
then turn around and run back to their owner with the bear in hot pursuit.  Szuka, still just an adolescent and fun-loving pup, is goofy enough to do that.

I decided to do a little research and see what I could do – in addition to buying bear bangers and bear spray, which I stocked up on – to keep bears away (plus what to do in the case of an encounter!).  The number one rule for keeping safe in bear country?  Hide food sources (garbage, compost, etc).  That’s kind of a no-brainer, and despite my former penchant for fox-feeding, we’ve been diligent about not leaving food out.  I have no idea what possessed the former owner to plant two juicy apple trees between the house and the garage.

We had been meaning to chop the trees down, but last fall there were no confirmed signs of bears coming to our yard (we thought we saw bear poop, but now I’m not so sure), and so it hadn’t seemed urgent.  Plus, we liked the leafy privacy they afforded.  Well, it turns out that last year there was a big bear hunt in the area that eradicated the bears, but without an organized hunt this year, more black bears began appearing.

A couple of Instagram friends told me we could interrupt the fruit cycle and still keep the trees.  I thought that might be a good idea but suddenly the fruit tree removal seemed very urgent.  The persistent little black bear started appearing daily and I was worried he’d bring bigger, even bolder friends.  Even though he’s small, I knew that he could still do damage if provoked – especially if he took a swipe at Szuka.  He tended to appear around the time we went outside to play fetch – and I started to wonder how many times he’d been only a few feet away without us realizing.  One night I decided to read about every fatal bear attack in North America in the last hundred years, and it had me wishing for a comforting episode of The Walking Dead.  Did you know that a woman was mauled to death in her kitchen when a black bear burst through her window and attacked her?!?  Hubby and I decided, definitively, that the trees needed to go.  Right now.  Luckily, my father-in-law was kind enough to drop what he was doing and come by with a chainsaw.  He expertly cut down the trees (digging up the ground around them so the sawed off stump won’t protrude) and then we bagged up all of the apples.  I still need to cut down and dispose of the heap of branches, but the larger chunks of wood we’ll dry out and burn.  We mourned the apple trees a little, and the heap of brush has certainly not added curb appeal, but I feel a lot better now that the lure of delicious applies is gone. 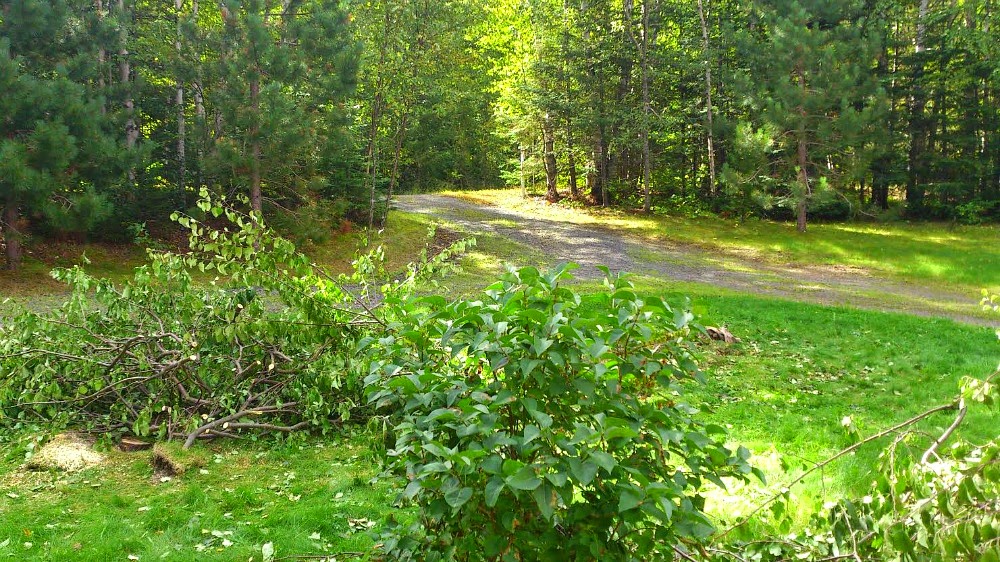 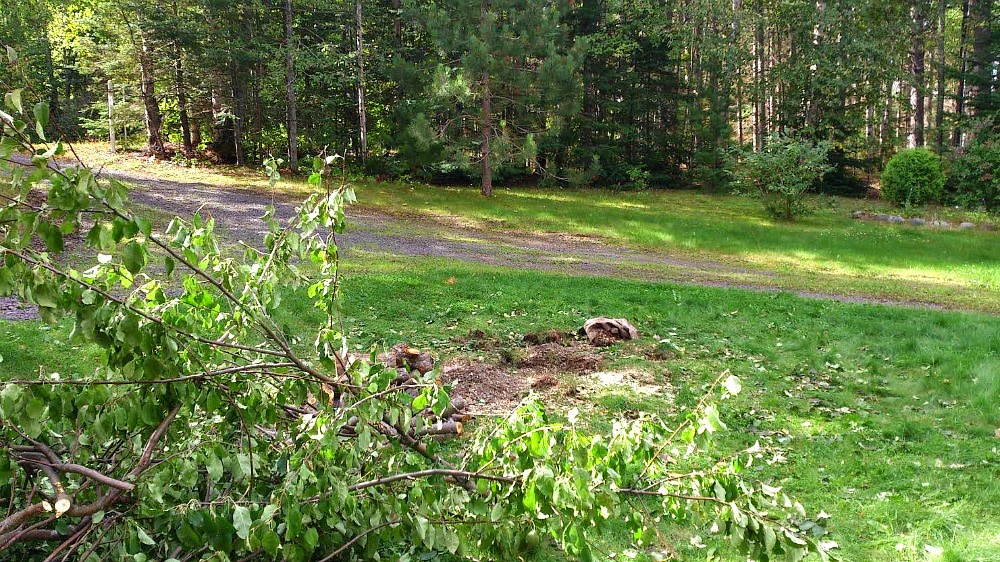 The bear will still come back for a bit, out of habit, until he realizes that the apple buffet has officially closed.  The neighbours have blueberries that have yet to ripen so it’s entirely possible that he’ll still be hanging around the area, snacking.  Hopefully, though, no additional bears will be drawn to our yard because we never leave out anything tasty.  At least by the time our little guest grows to his full size, our apple trees will be a distant memory.  In the meantime, I’m not going outside without bear bangers and bear spray, plus I’ve put a giant bell on Szuka’s collar so we don’t accidentally crash a teddy bear picnic.