When I was approached by Artsheaven to choose a piece from their selection of oil painting reproductions, or have one of my own photos turned into a painting, my thoughts turned evil.  Part of me was really tempted to order a copy of some truly famous painting, then convince my wee niece and nephew that I was an art thief and had stolen the original, haha!  But I couldn’t pass up the opportunity to have one of my favorite photos turned into a painting.  It took me all of five minutes to decide which photo (you might remember it from this post): 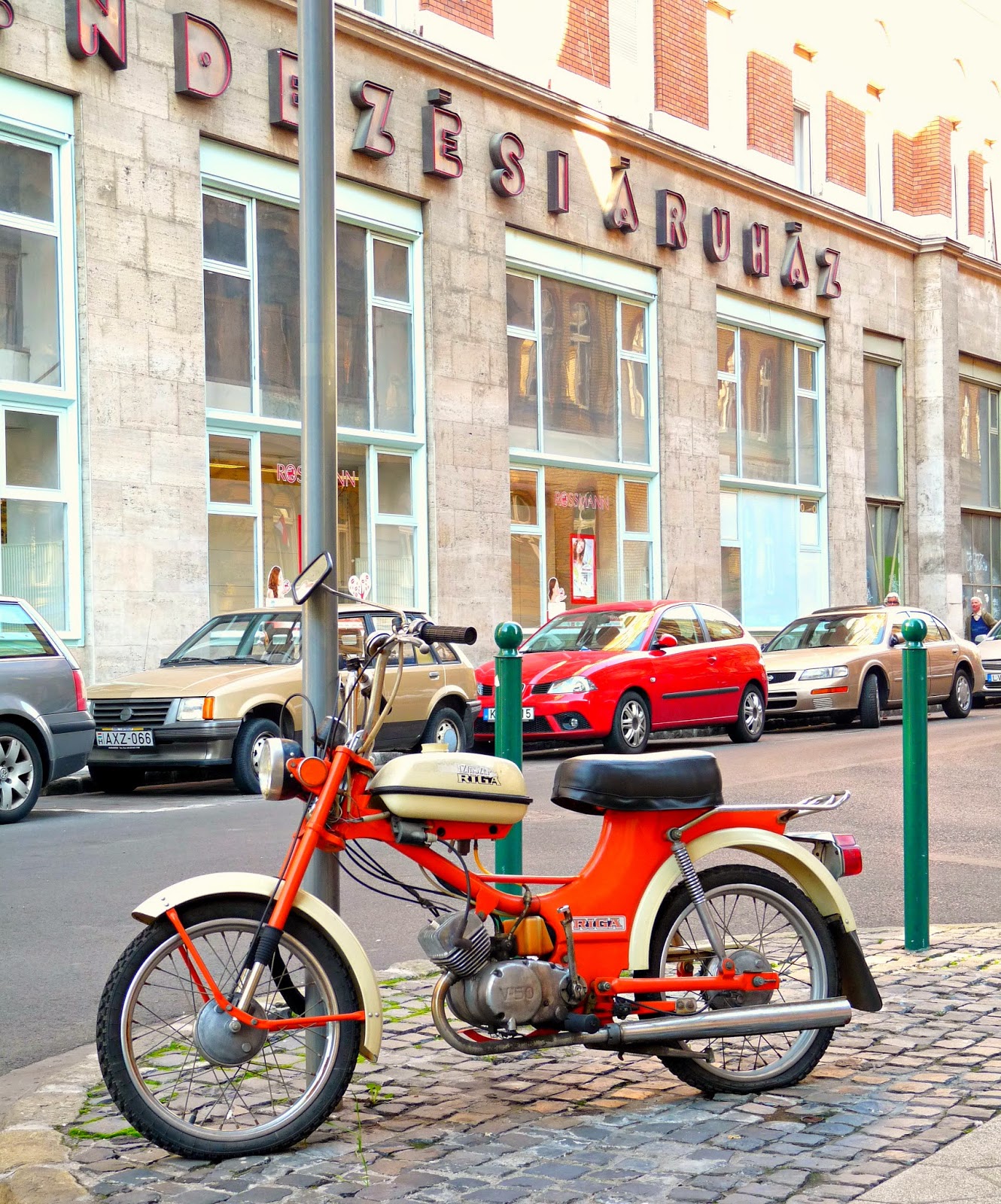 This photo from Hungary is one of my favorites!  It’s a drugstore around the corner from the apartment I lived in while doing research in Budapest.  The building still has the original red lettering from when it had been a home decor store.  I frequented this particular drugstore often, for soap and toothpaste (and chocolate, I’m not going to lie), so the familiarity of it is comforting, but the real showstopper in the photo is the orange moped parked in front.  I love this photo and I knew that Hubby – with his lust for motorcycles (close enough) and penchant for orange – would appreciate this hanging on our walls (plus he spent some time in Budapest with me, and recognizes the place too!).

I sent in the photo, but asked for these changes:

Here is my photograph turned into an oil painting: 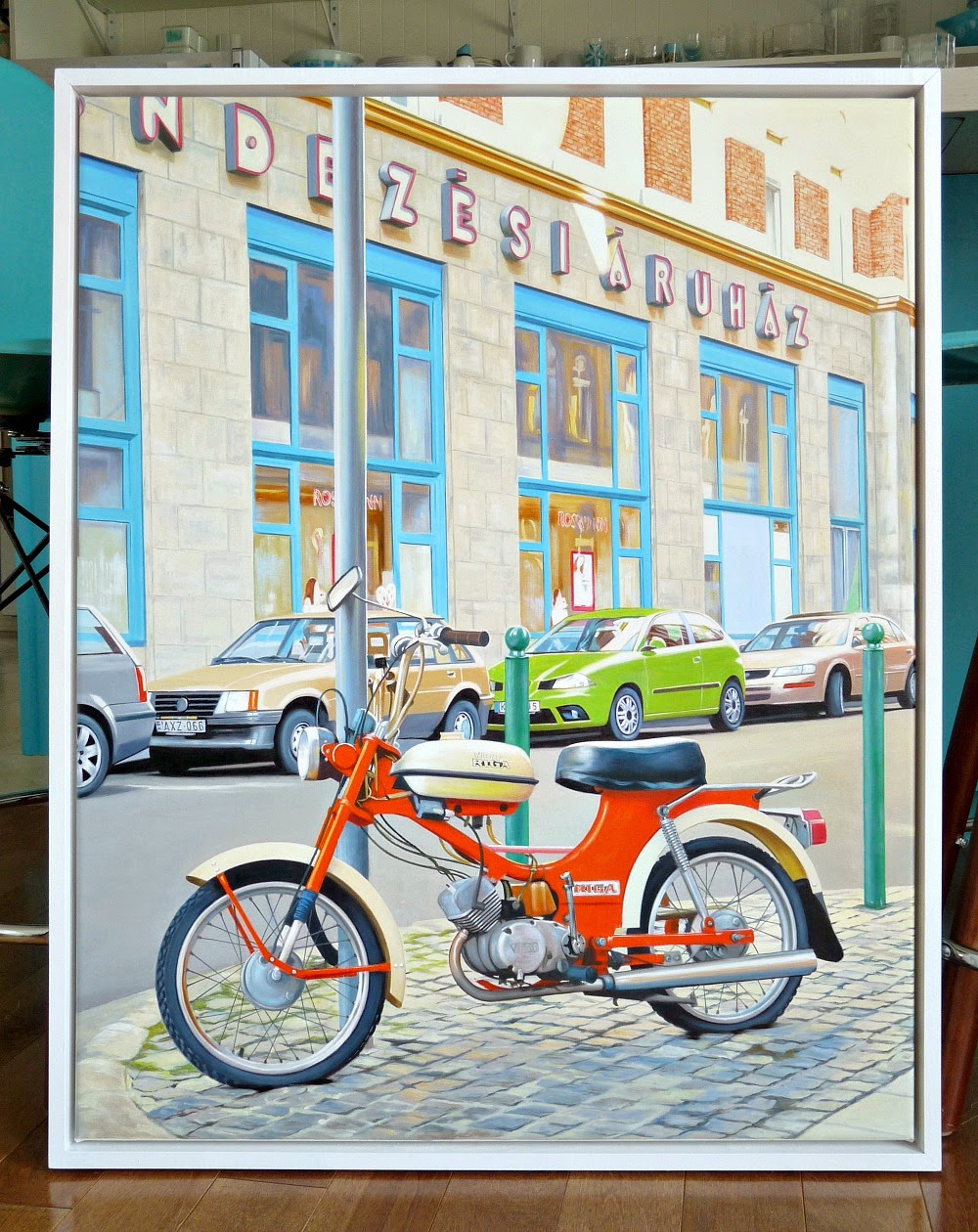 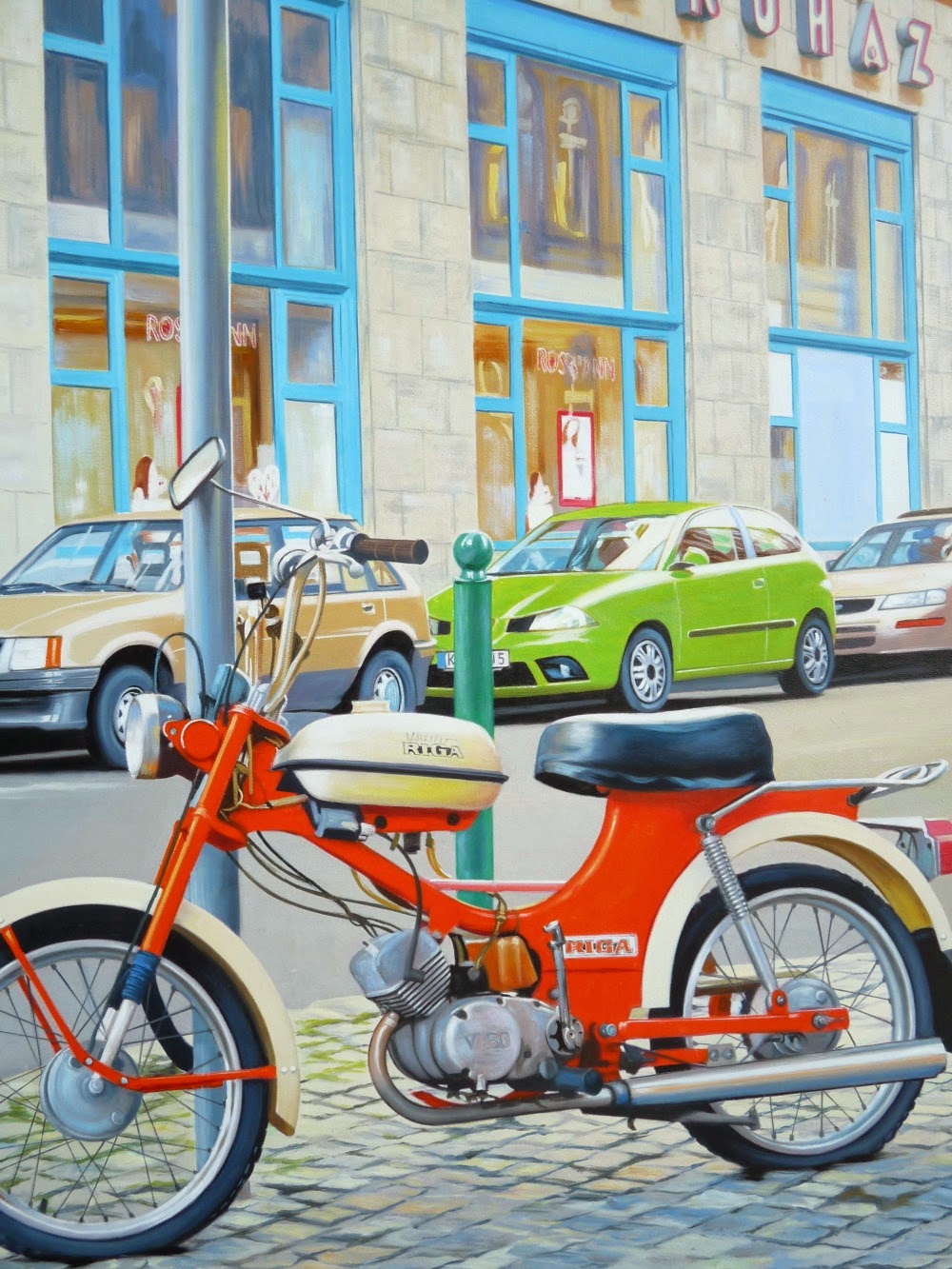 I didn’t know what to expect and I was pleasantly surprised.  It turned out so beautifully!  Right now I like my new oil painting in the hallway: 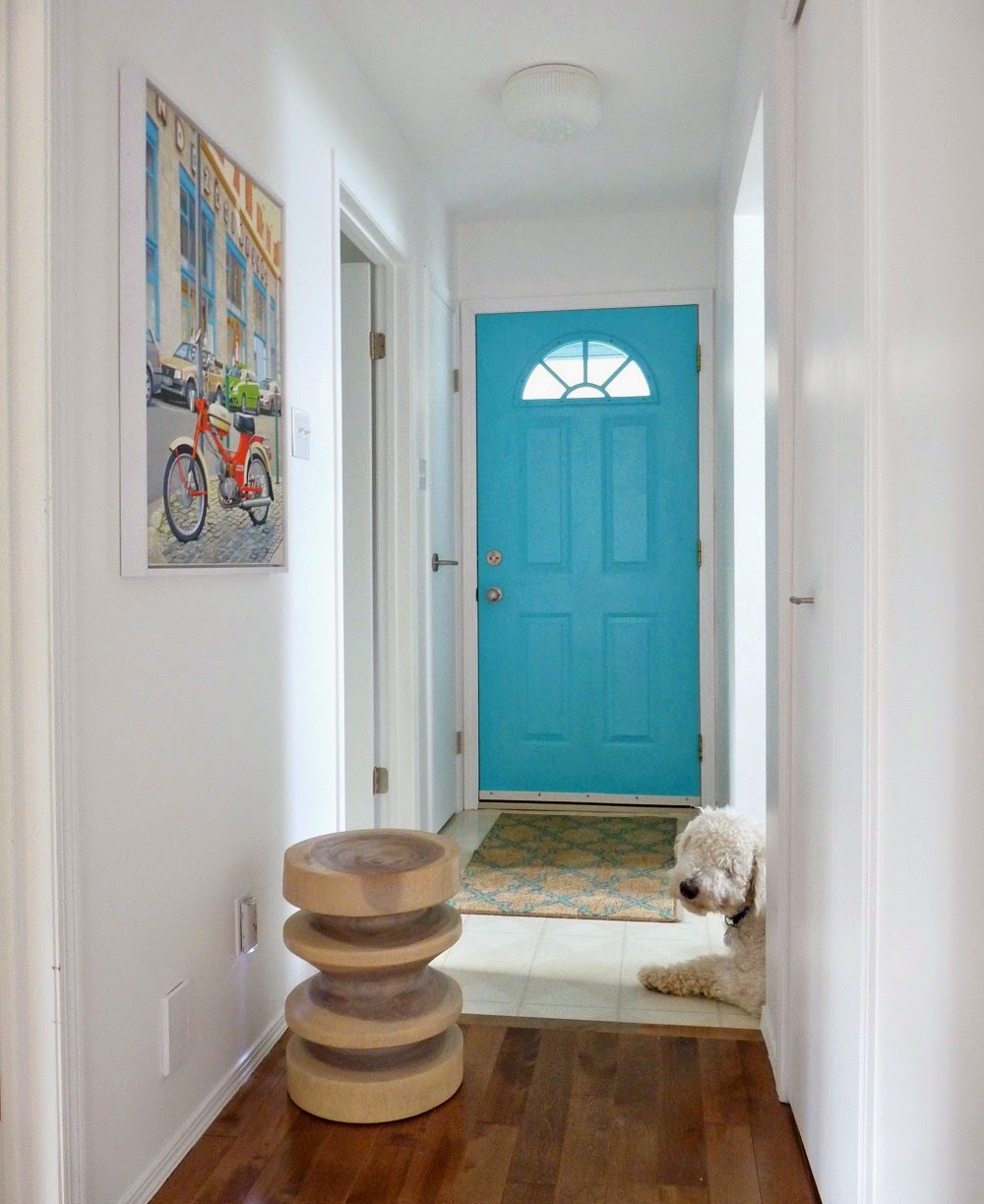 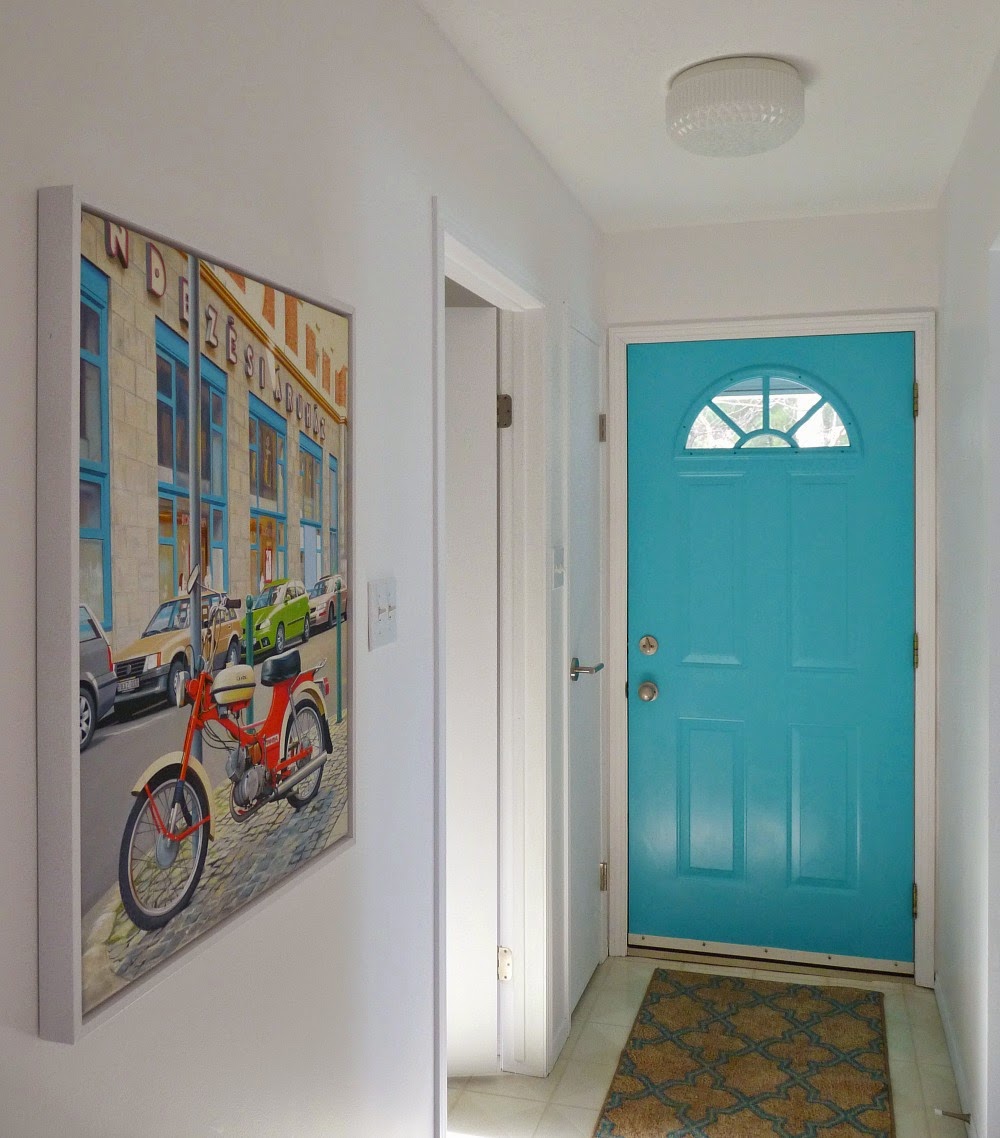 It picks up some of the orange and green from my DIY triptych: 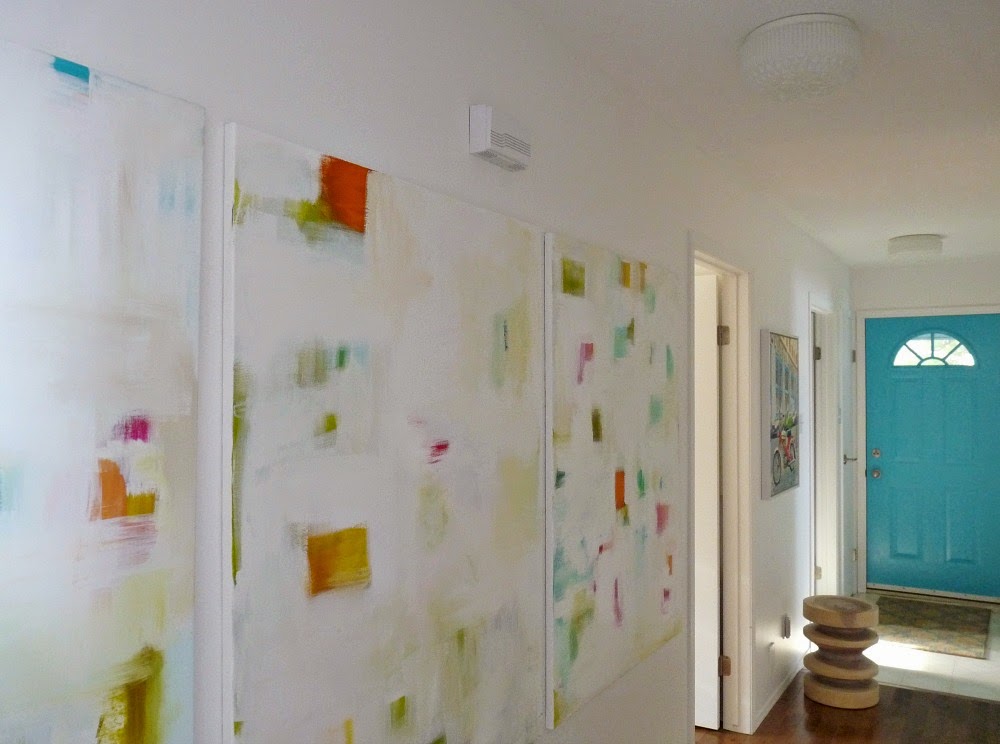 I hadn’t even thought to ask how my new painting would be shipped and was a little disappointed when it arrived un-stretched.  It makes total sense though, because it’s a safe and cost-effective way to ship a painting.  However, even though I’ve stretched many of my own canvases for my DIY paintings, they’ve always been gessoed after.  I have always thought that stretching canvas that’s already painted looks like a huge pain.  What if the paint cracks? What if I wreck the painting?  How do I get it taught enough when it’s so stiff? We Googled and then dove right in.

Here’s how to stretch a canvas painting onto a canvas stretcher:

Hubby and I bought canvas stretcher bars from Michael’s but because they were out of the size we needed, we bought a size larger and instead of clicking them together with the pre-cut slats, just cut the edges and made mitered corners.  In hindsight, because we could have customized the size, we should have made it a smidge smaller than the painting, which would have made stretching it a snap.  As it was, the task was a little tricky because there was very little wiggle room for getting the painting positioned evenly and squarely.  It took a few tries, and a lot of staple removal, but we eventually got it centred and it really wasn’t as bad as I thought it would be – it’s a lot like upholstering a chair seat!  The paint cracked a smidge on the corners but it’s not seen from the front.  We were able to get it fairly taught, even without canvas pliers (which I really think would be handy).

Our hands were full so it was tricky to take photos, but there are a lot of great tutorials with step-by-step photos and diagrams.   I recommend this this wiki article about how to stretch a canvas for its really clear diagrams, but this article about stretching canvas also has a video if that’s more helpful to you.

For the corners, we looked at various tutorials and found many different ways to do it.  In the end, this is what we were able to do, given the thickness and stiffness of the canvas: 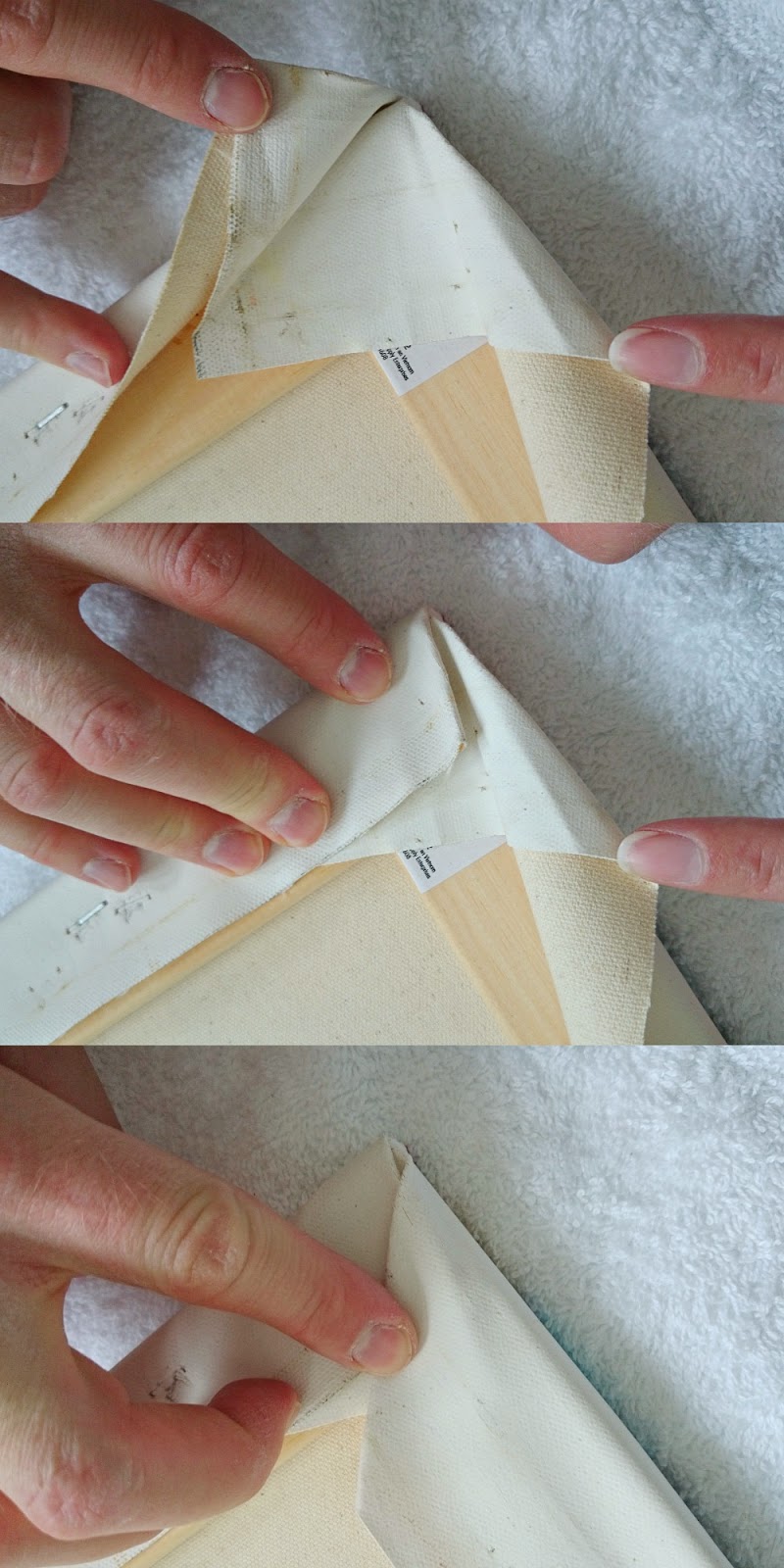 Here’s the back when it’s all finished: 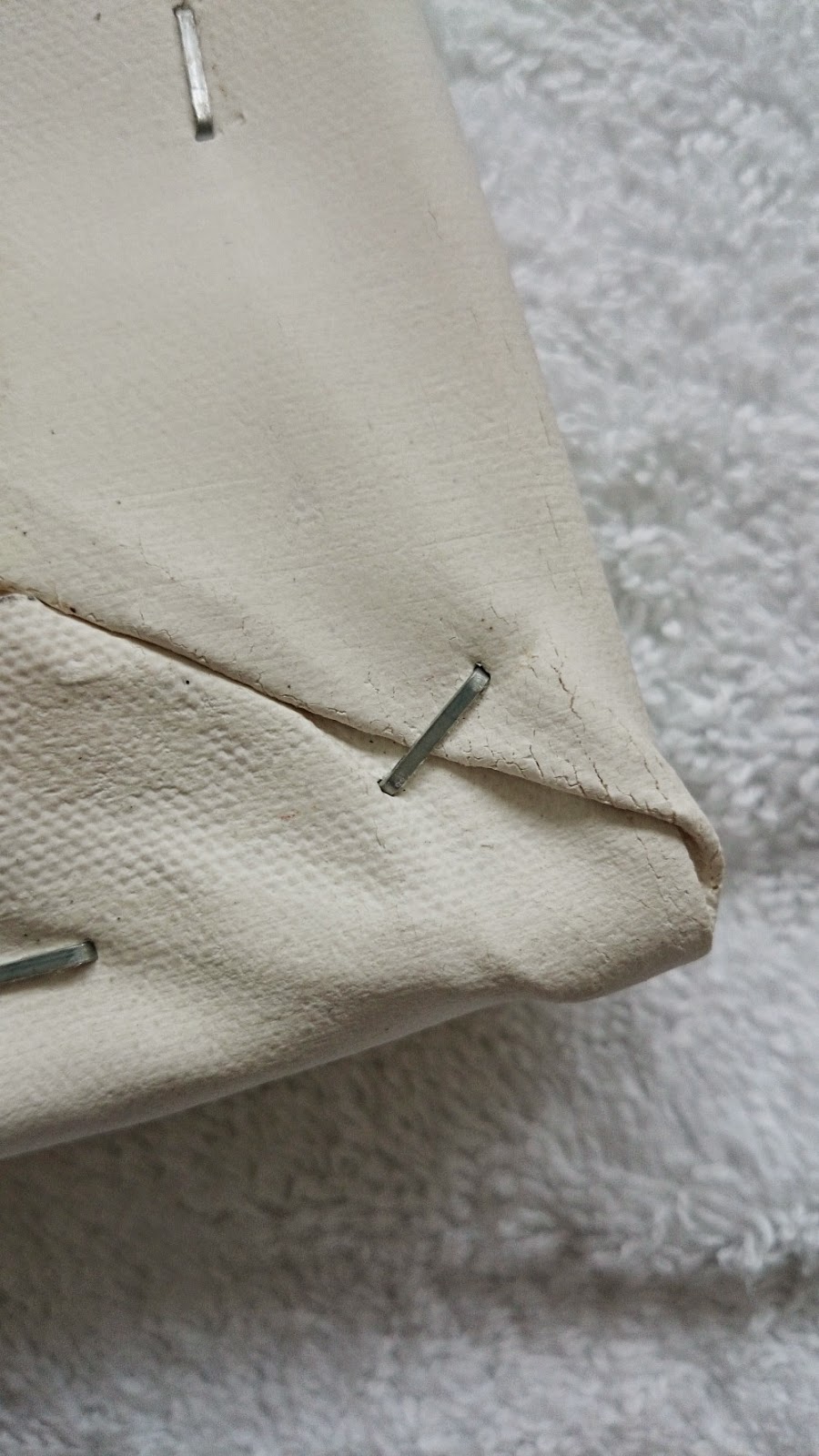 It was hard to get the corners to be really smooth and flat, but for our first try I think they turned out okay. 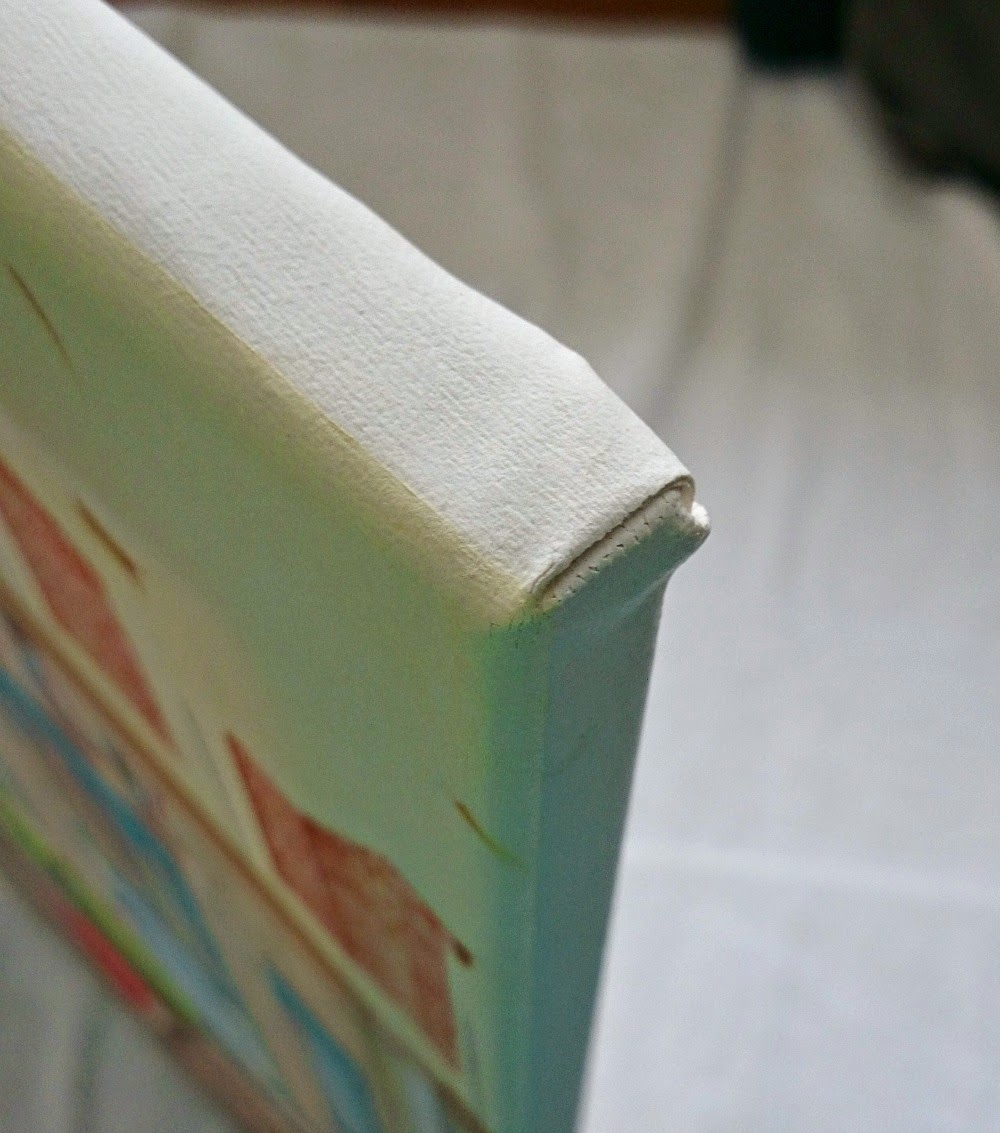 How to built a float frame for a painting:

I like the look of a float frame, so we picked up eight pieces of pre-planed wood from the molding section of Home Depot – they were .5″ x 1.5″.  All we did was glue them together into an L-shape: 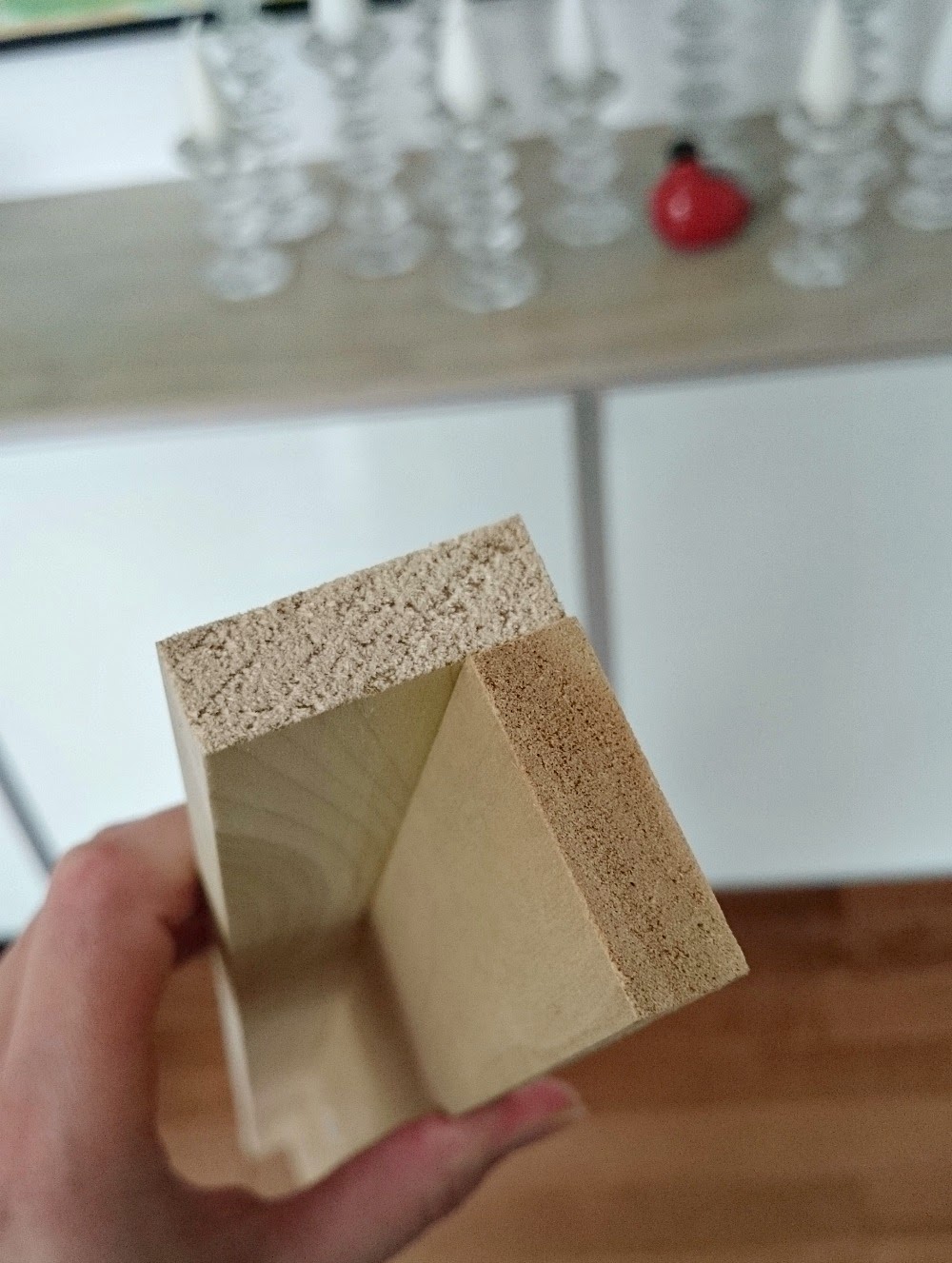 We used a miter joint to be put them together, with wood glue and small finishing nails.  The frame is ever so slightly bigger than the canvas – we left a 3/16 gap between the canvas and the inside of the frame. 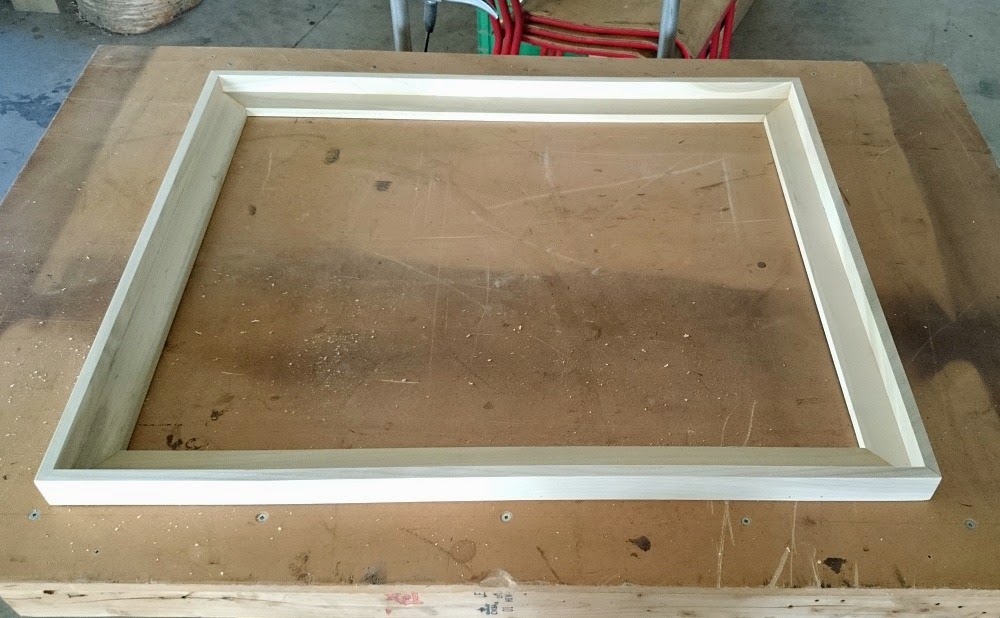 Once assembled, I lightly sanded the edges and sanded the surface smooth before applying multiple light coats of Rust-Oleum Universal primer + paint, in Satin White. 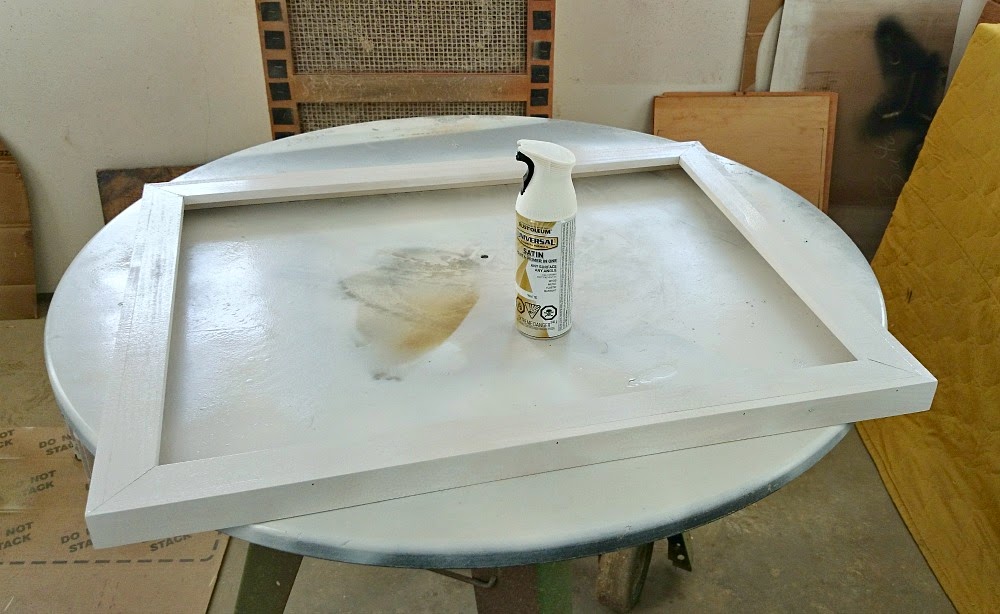 After the paint was dry, we attached the frame to the canvas stretchers from the back, just screwing the back of the “L” to the canvas stretcher bars.  We used cardboard shims to make sure that it was centred in the frame while the frame was being attached to the painting.  The finished piece is hung with screw eyes and picture hanging wire.  This was a different approach than the last frame we made, and it seemed just as easy.  We could have painted/stained the back of the “L” to create some depth/interest but I liked the white on white look.  Plus, because the edges of the painting are white, the unpainted edges disappear in the white float frame.

The cost for the frame was about $20 and the stretchers cost roughly $25 (they could have been cheaper because the size we actually needed was less expensive). 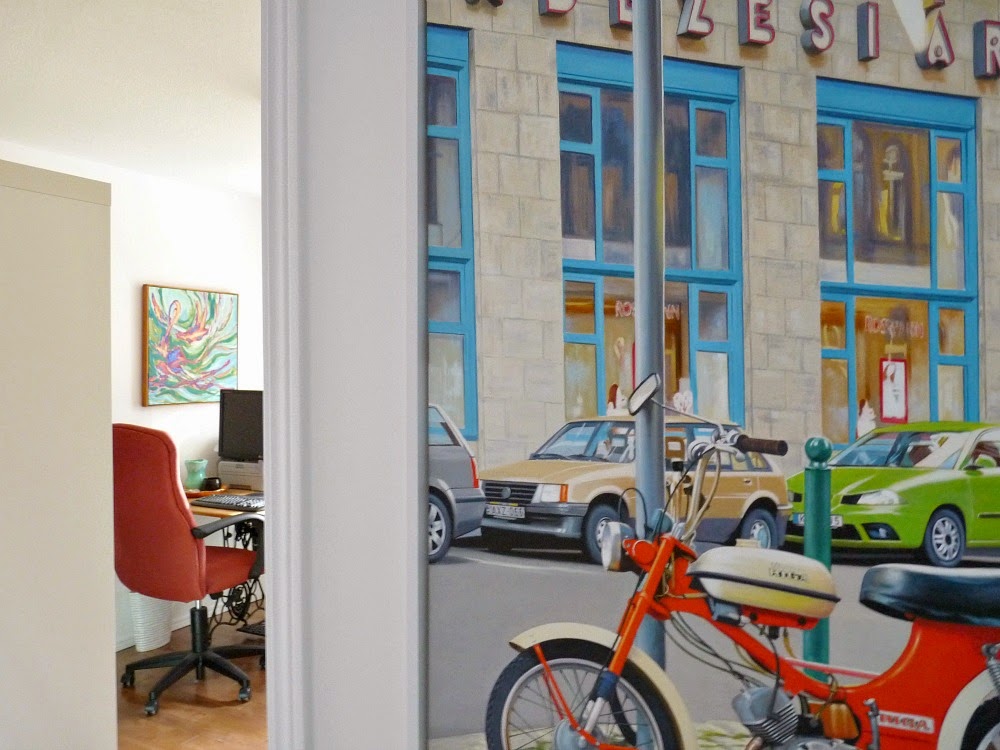 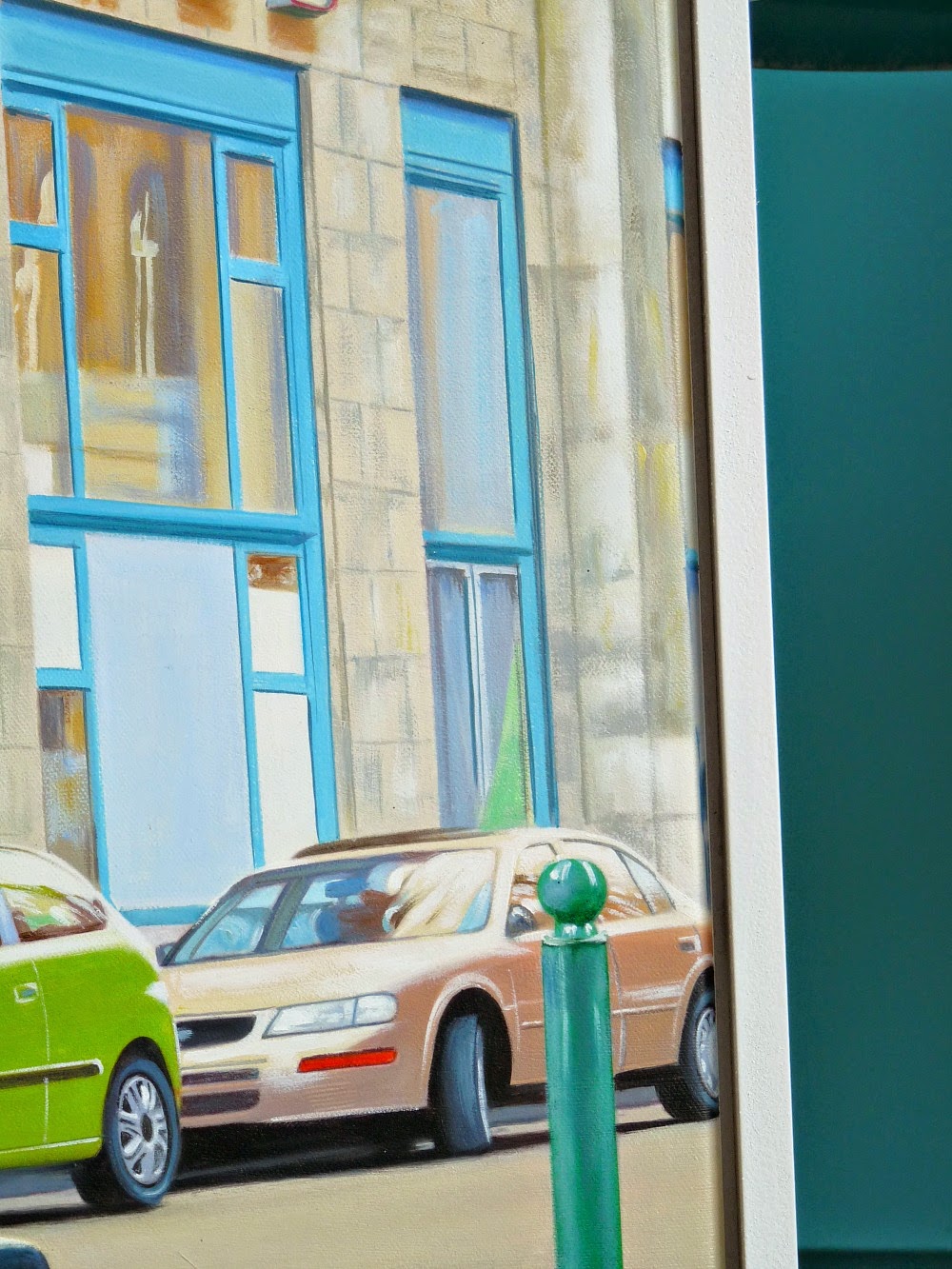 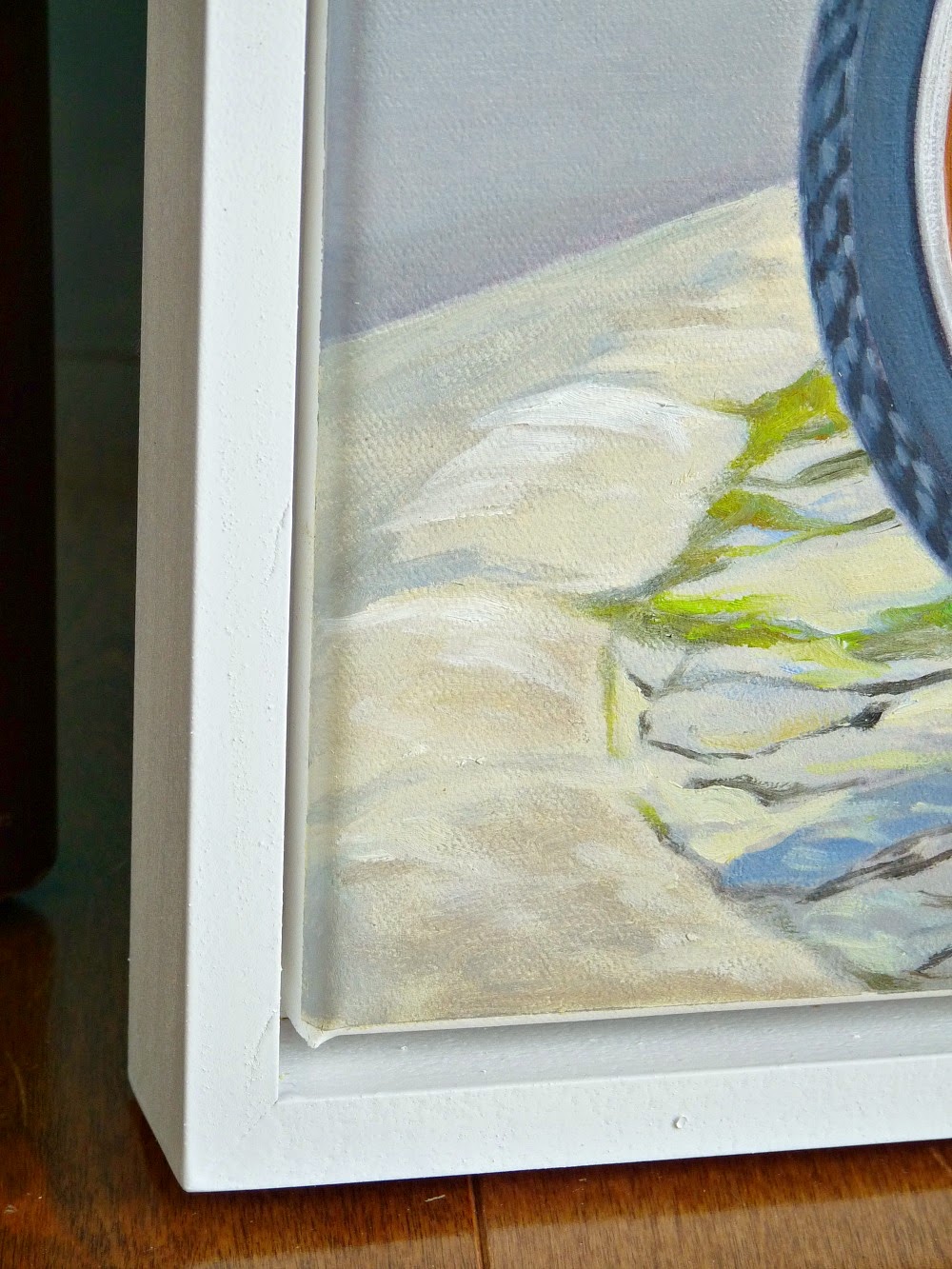 Szuka doesn’t give a hoot and just wants me to stop fussing with this painting and go outside and play with her. 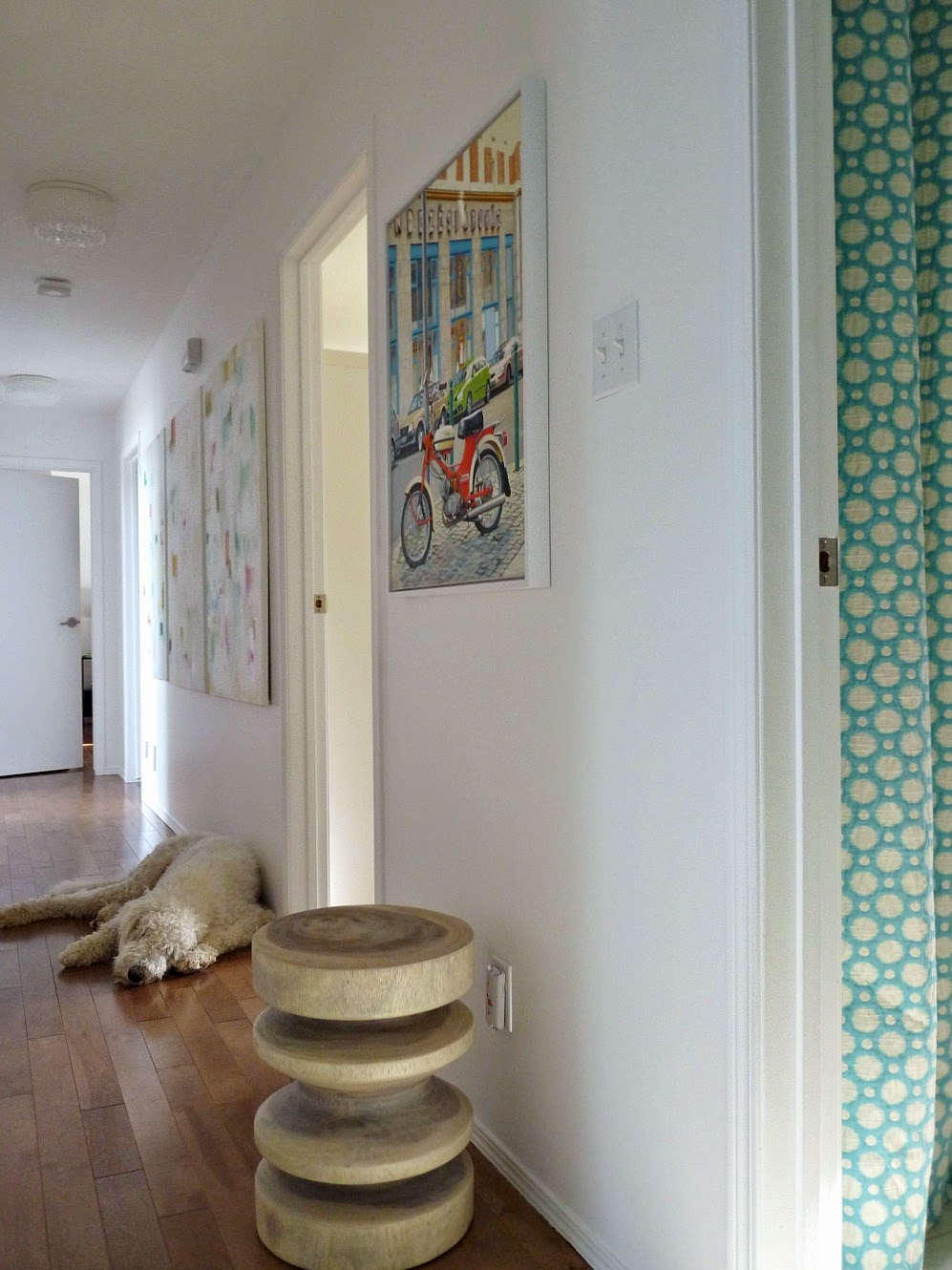 Artsheaven provided this custom painting, but I was not otherwise compensated for this post or encouraged to provide a positive review.  Special thanks also to Rust-Oleum for providing the paint for this framing project.  And thank you, Szuka, for trying to get into every single picture.  You’re a cutie and with photos of you included, I know I can just type total jibberish and no one will notice. 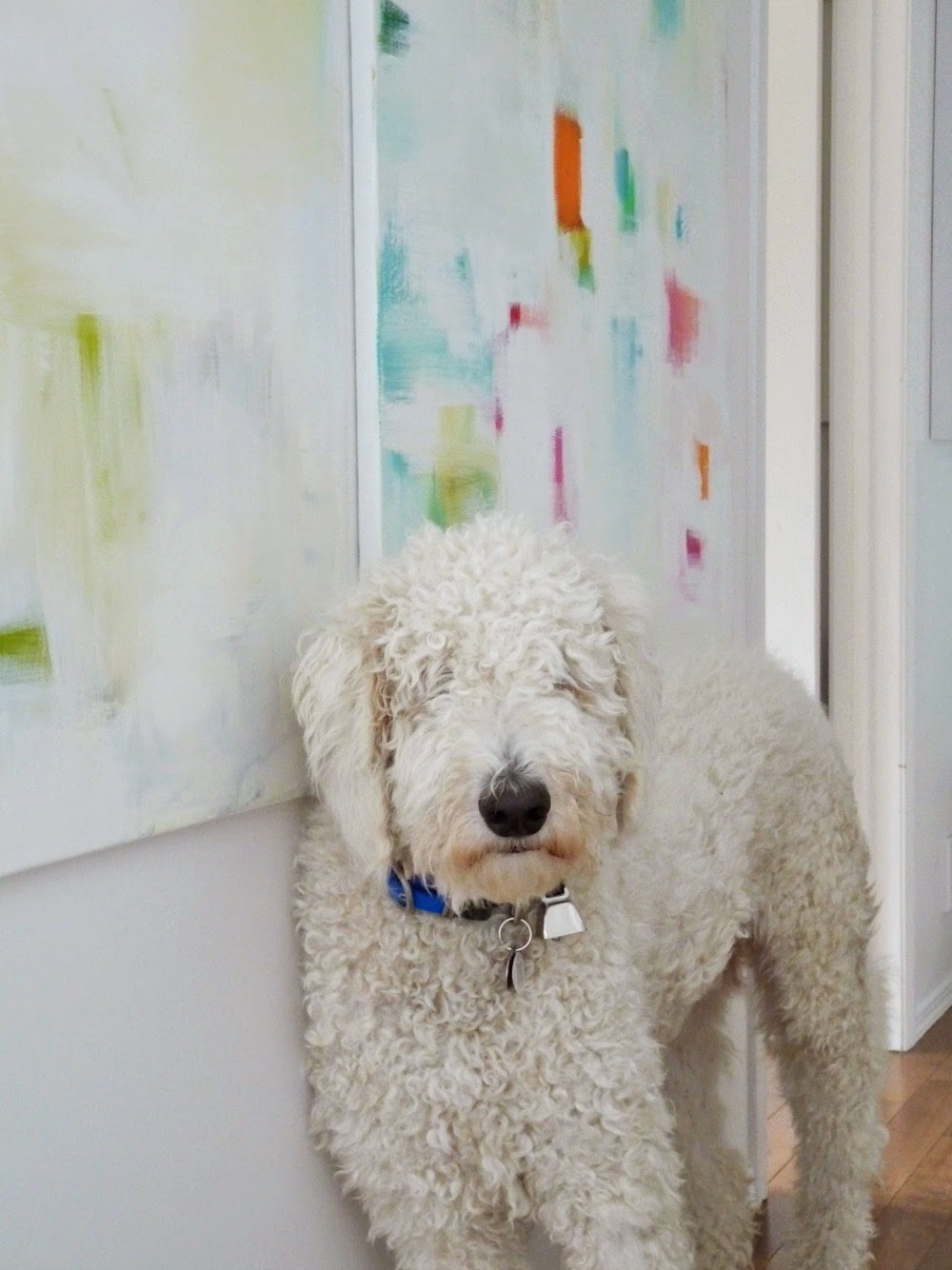