Need a cheap way to fix leaking gutters?  I have just the solution!  I’m sharing that, plus a few other cheap and easy updates we made around the house recently…

Hubby and I tend to drag our heels a bit when it comes to projects around the house that lack a certain panache.  But we are motivated by saving money, so when our municipality offered a free landfill day, well, that lit a fire under our bums to get some things done (normally a truckload is $25).  It started with cleaning out the garage and tidying up around the property so we could take the opportunity to throw out/recycle all of the debris, but once we were in the zone there was no stopping us.  We replaced/added about half a dozen motion lights (now a squirrel can’t even cross our property without being lit up like an opera singer), and put up driveway markers in the hopes that this winter I won’t ditch the truck (again).  We gleefully stashed the lawnmower, but sadly serviced the snowblower.  Shortly before free dump day we realized that we had a bit of room left in the truck, so we decided to remove the busted stairs leading up to the garage.  Hubby had accidentally put his foot through a rotten step in the summer – it was in terrible shape and totally pointless.

He tackled Project Stair Removal while I was giving our headboard a refresh.  We allotted ourselves a half hour to complete our respective tasks.  While it took me closer to an hour to spray paint the headboard and nightstands, Hubby realized he could just flip up and remove the entire set of stairs in minutes, instead of taking it apart piece by piece as he had planned. 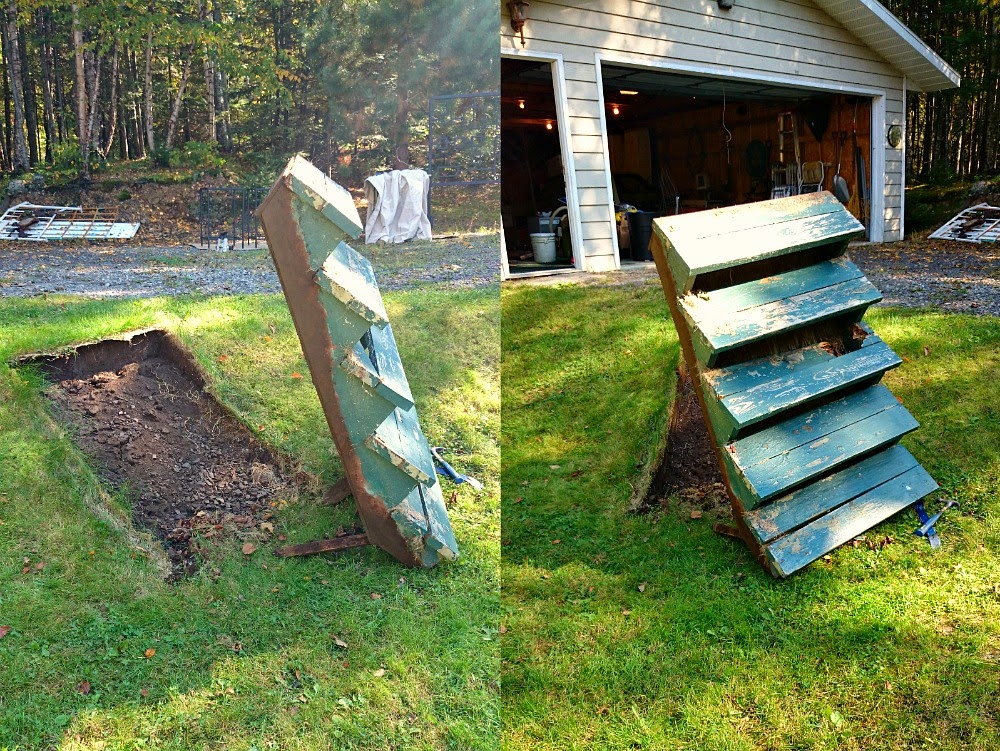 He spent the rest of his half hour examining the salamander he found: 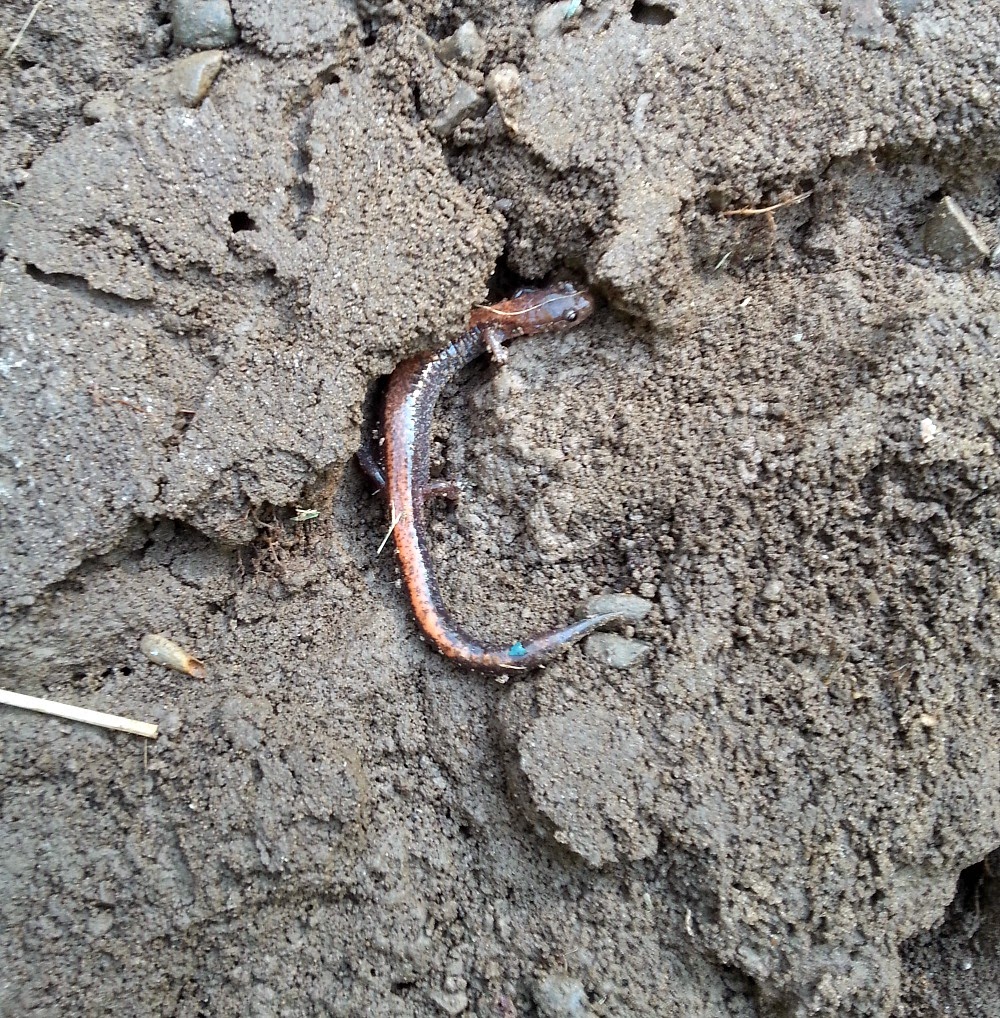 Once the salamander was thoroughly examined, we tackled a few more projects – propelled by the victorious feeling that accompanies a problem-free project.  Our gutters had been leaking all summer and I needed a cheap way to fix leaking gutters so I decided to try Rust-Oleum Leak Seal, a flexible rubber sealant. 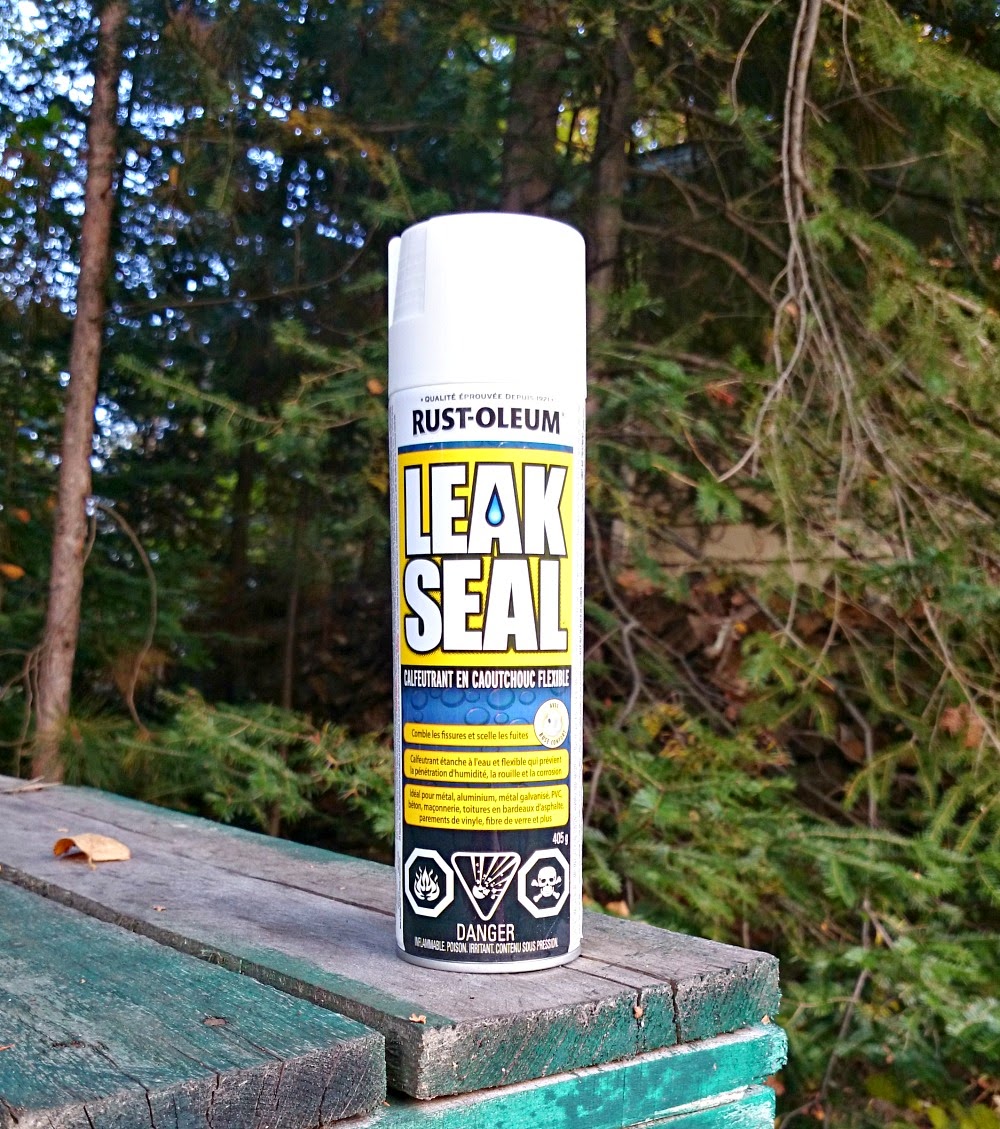 I tried to demonstrate the leaking in a manner that didn’t involve me standing outside in the pouring rain: 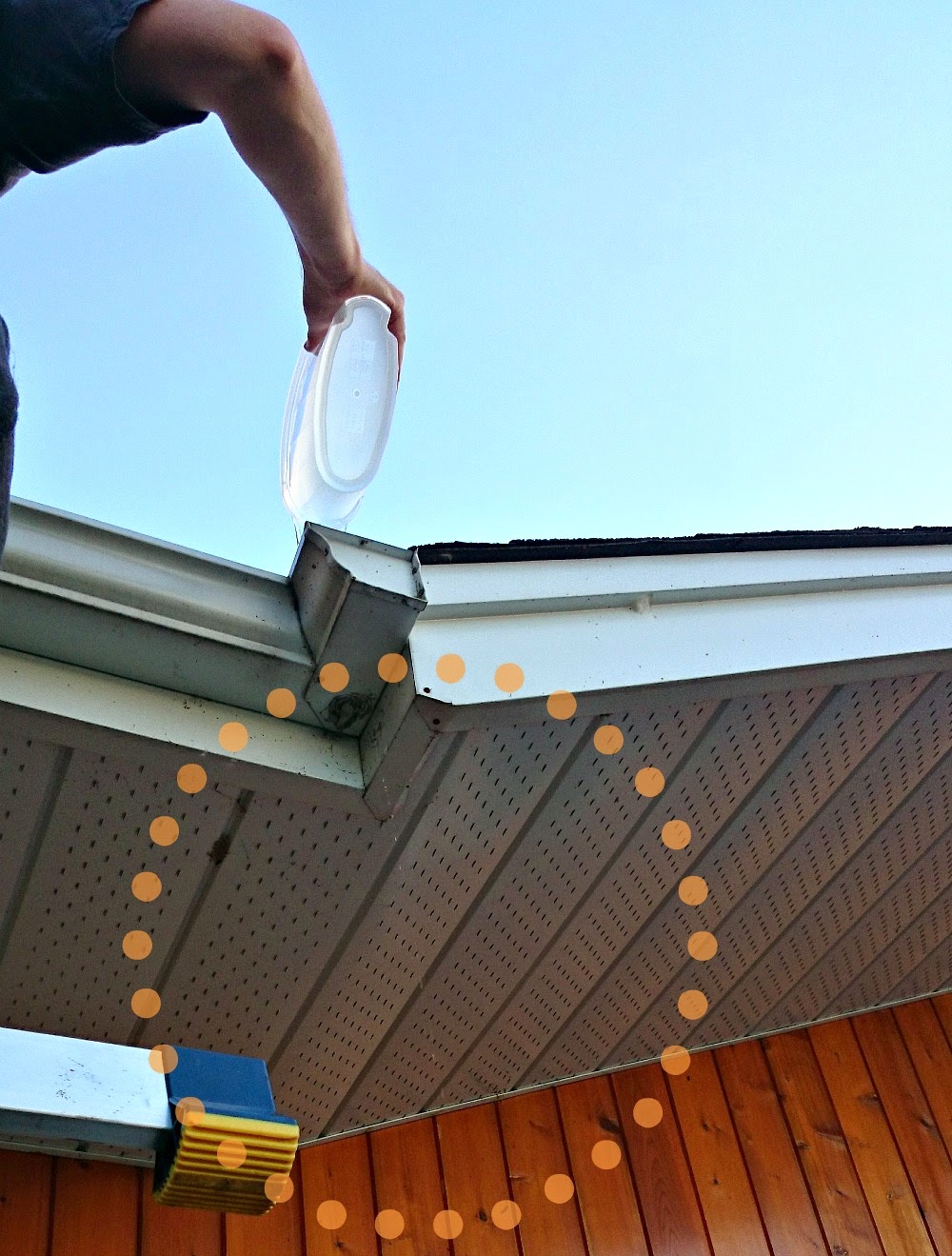 Happily, the Leak Seal – a flexible rubber sealant – worked perfectly and it took barely any time at all to seal up the cracks.  Eagle-eyed Hubby had been keeping tabs on the gutters during rainy days and already knew exactly which spots needed sealing.  Now they no longer leak!  One day we’ll need to replace them, but for now this was cheap way to fix leaking gutters. 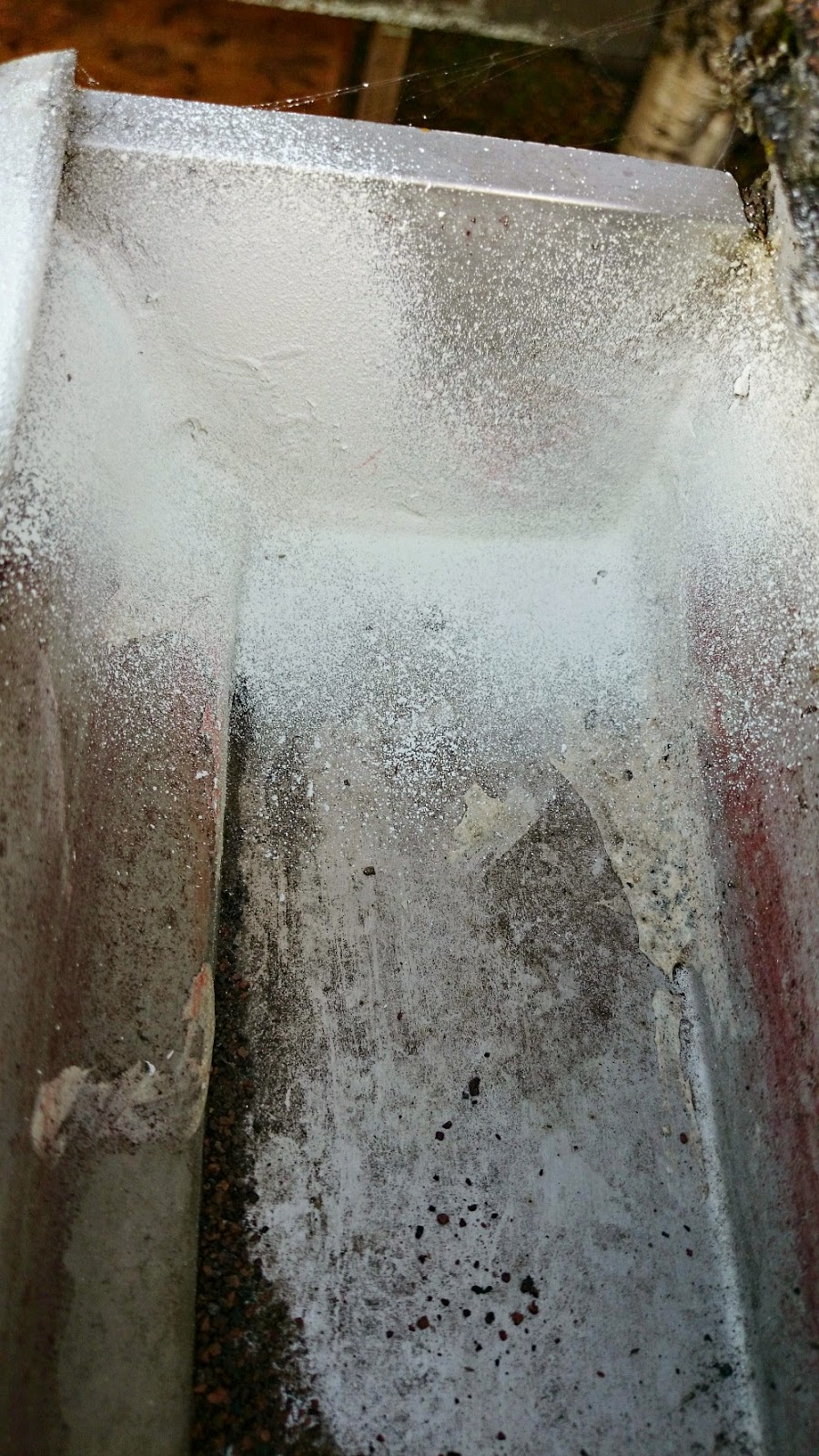 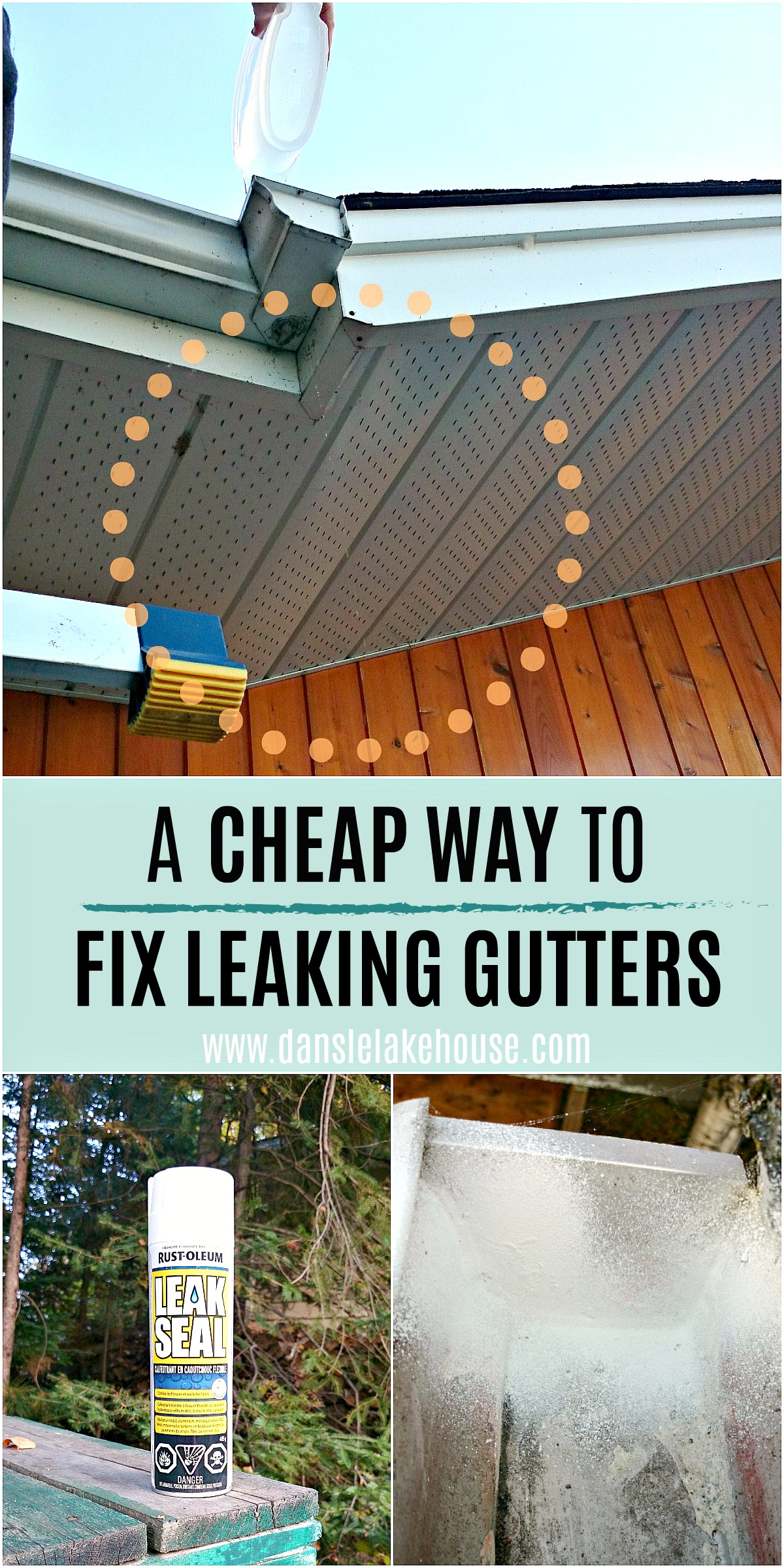 We were on fire, right?  I even started doubling up on jobs. 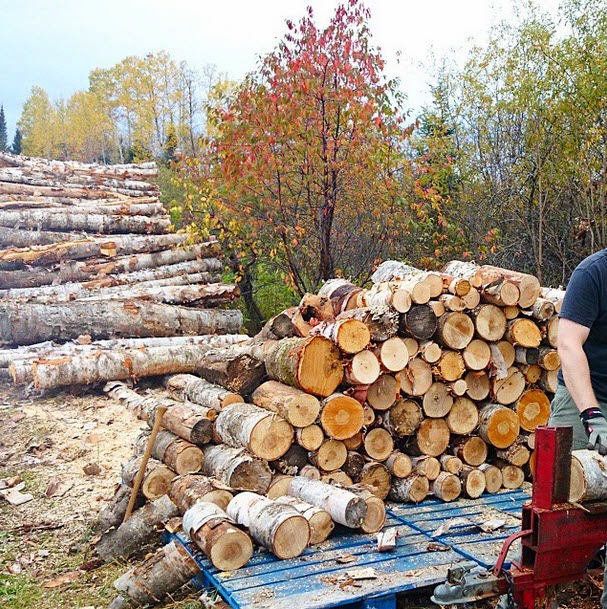 While we were splitting and stacking firewood at my father-in-law’s, I absconded into his awesome spray painting booth and painted our ugly beige doorbell cover with Rust-Oleum Satin White, a nice matte white that works on plastic too. 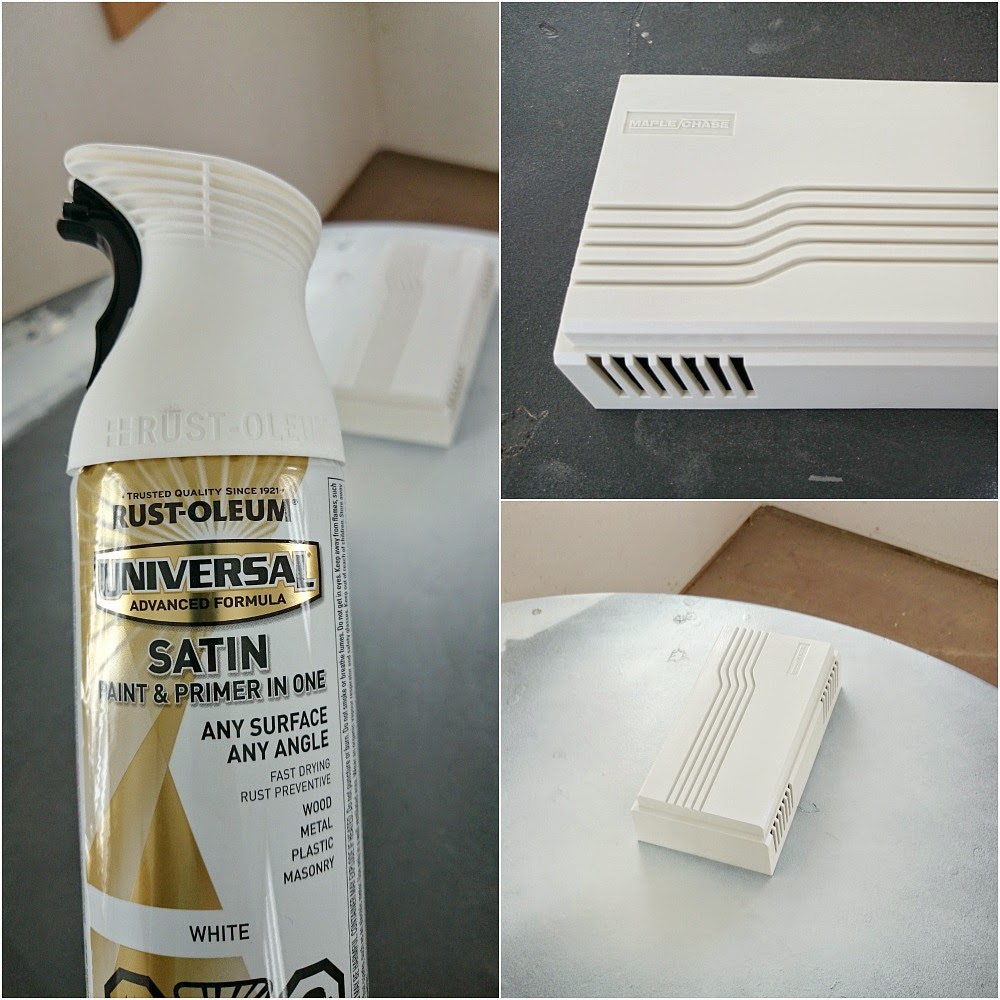 I really wish I had painted to doorbell cover in the townhouse.  I’m so happy I took the five minutes to paint it.

Our to-list is far from complete but I’m thrilled that we tackled so many projects this fall that normally get eclipsed by more fun and rewarding projects, like making frames for paintings and rub ‘n buffing hardware.