I’ve had to adjust, moving from a city of nearly a million people to a municipality of only a few thousand.  Sure, there’s a proper city within an hour’s drive but with only about 100,000 residents, it’s small potatoes.  I’ve been meaning to write more about this ongoing transition, but a lot of what I’ve had to adjust to has turned out to be far more enjoyable than expected, and I’ve easily slipped into new routines that now seem so comfortable and natural.

One change still feels kind of weird: dealing with our garbage.  When I hear couples argue about who brought the garbage cans back from the curb, who left the lids off and whose responsibility it is to move those cans twenty feet, I want to knock their heads together.  Hubs and I (although sometimes it’s just me), collect, bag and tag our garbage and then drive it many kilometers to our municipal landfill, which has somewhat inconvenient and limited hours.  Each tag costs 50 cents, but we get an annual allotment plus a free bag tag for each bag of recycling we bring in.  It’s an open pit landfill, with black bears strolling around.  We stand in the back of our truck and heave our bags so they fly as far as possible into the pit. 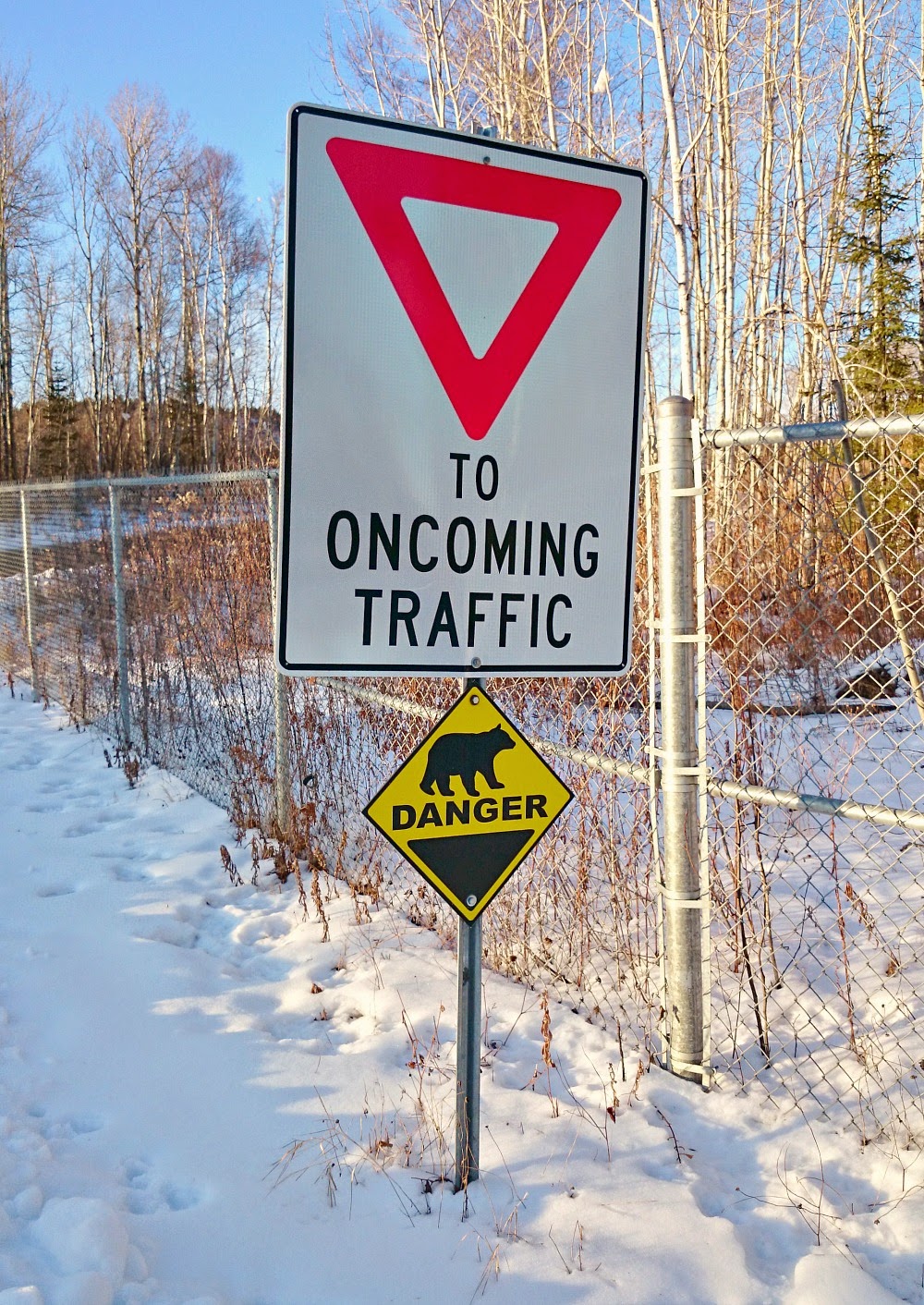 Sometimes it smells, as you might expect, and it’s normally super muddy, but in the winter it’s not so bad.  At first I was horrified by this process, but now, even though it still feels strange, I’ve grown to like this household chore and I loiter there more than Hubby would like.  There’s something kind of powerful about seeing all of this garbage against a beautiful, rural backdrop.  It’s eery and horrifying, but in some ways strangely beautiful.  In the city, folks are so removed from the collective amount of waste produced, thanks to door to door trash collection, but also because the landfill in our nearest city is a giant trash compactor and you don’t see anything but a large silver machine.  It seems so neat and tidy.  Here, though, it’s just heaped and sometimes the wind takes pieces, obscuring a beautiful landscape.  It makes me really mindful of the garbage we produce.  I hope it’s encouraging Hubby and I to produce less waste – we definitely produce less than when we lived in the townhouse.  It certainly makes me think more about garbage. 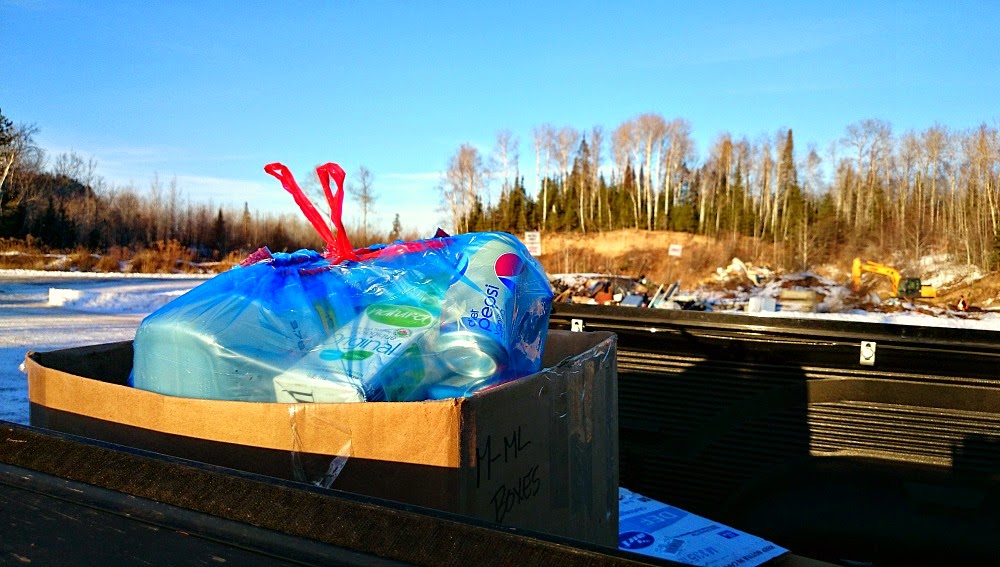 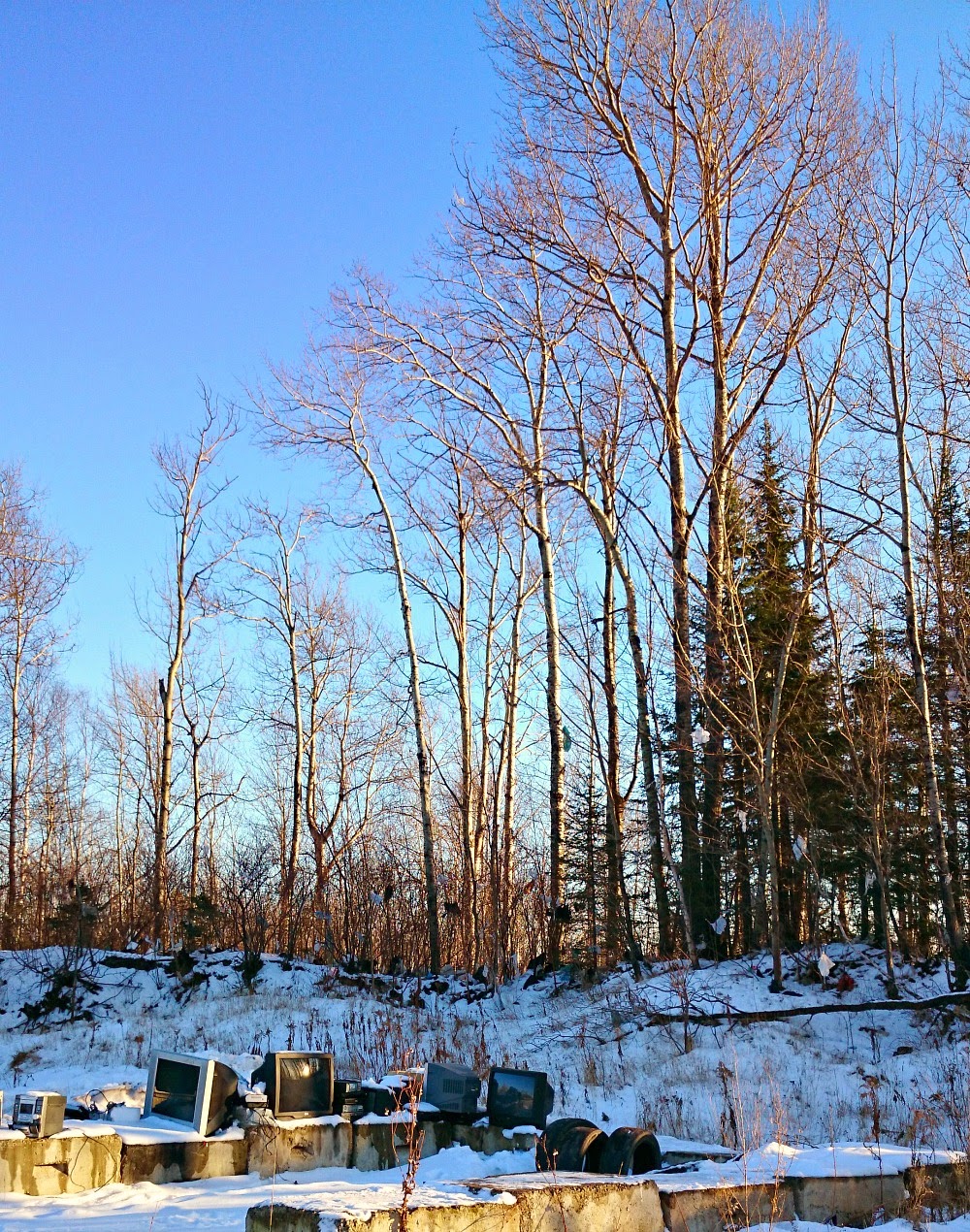 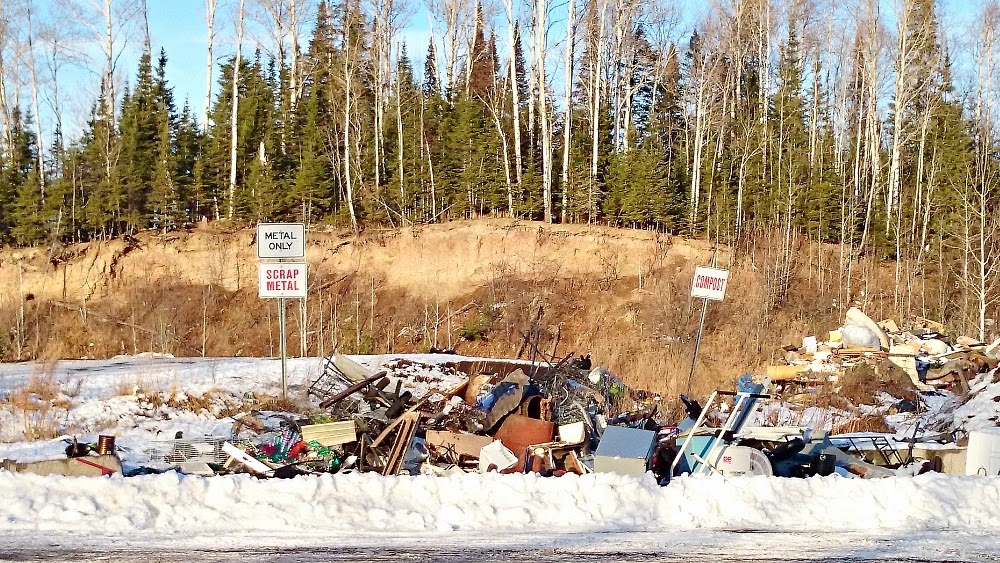 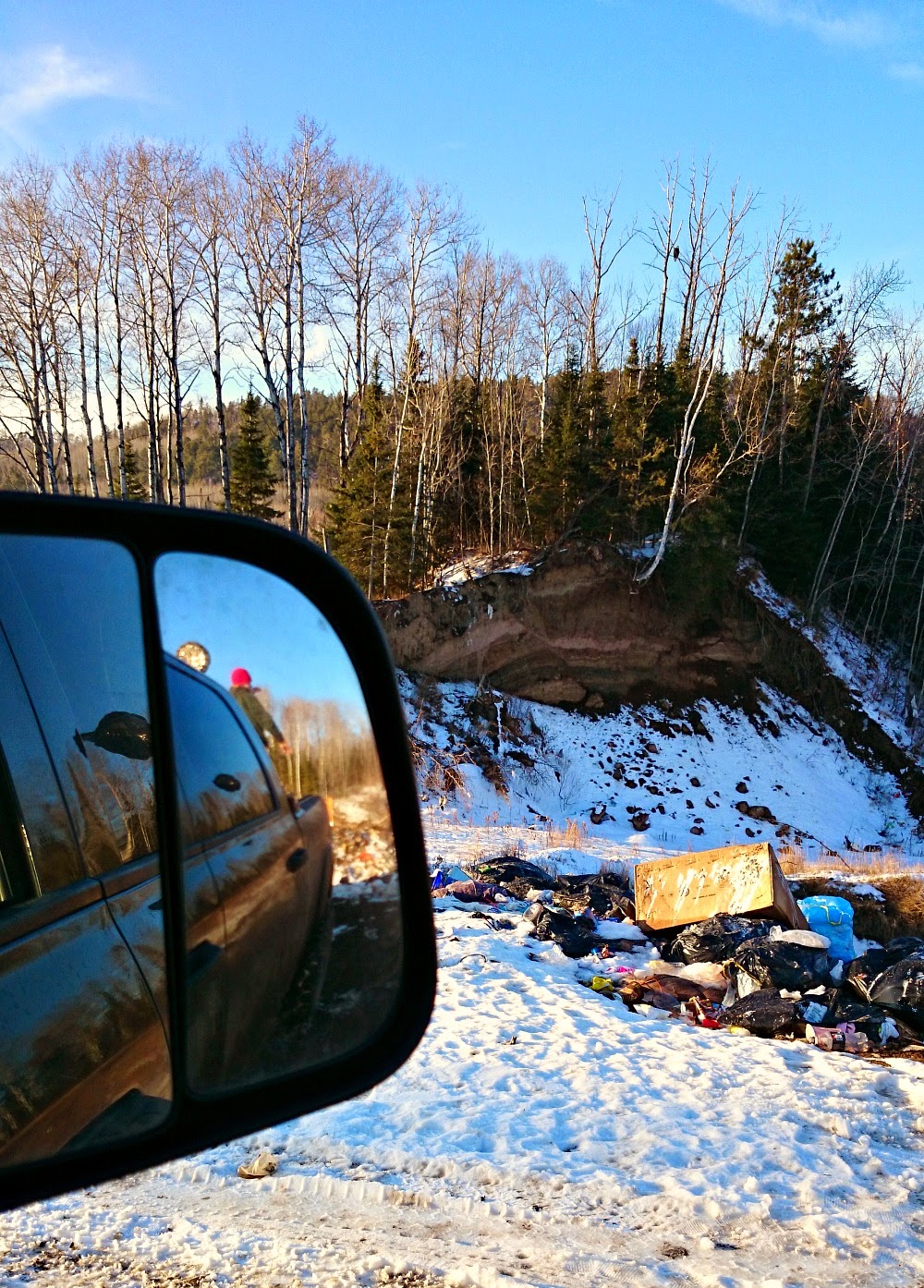 On an uplifting note, the picking is awesome.  There’s a shed for people to leave things for free, and I’ve scored mittfuls of vintage goodies – incuding turquoise Pyrex (I’ve left treasures too).  On instagram I hashtag these finds #goodneighbourshed, but I’ve only shared a few finds.  I’ve absconded with quite a bit more than I’ve let on.  I have yet to pluck something from the actual landfill, but there was a box of vintage dishware – just out of reach – that had me thinking about wading in. 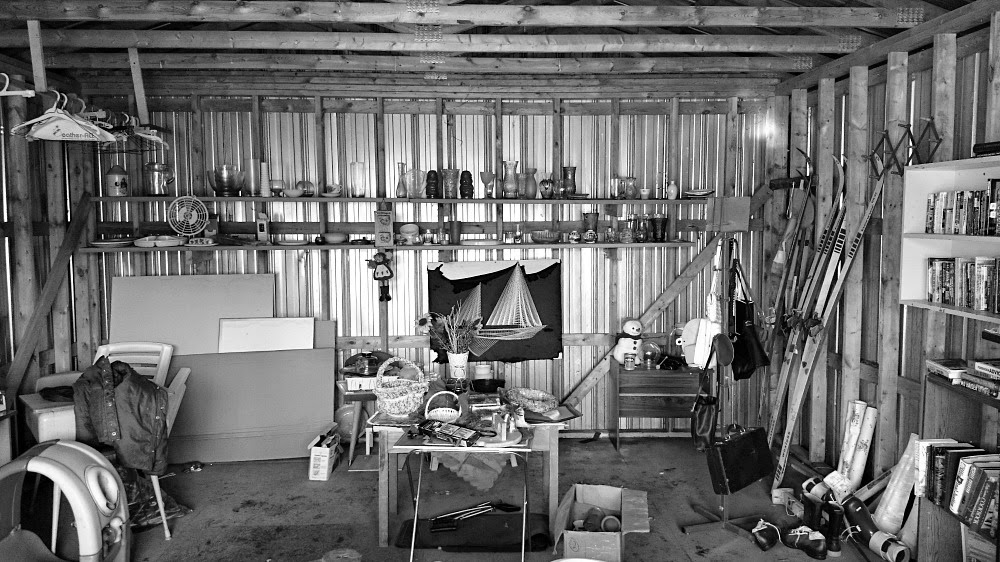 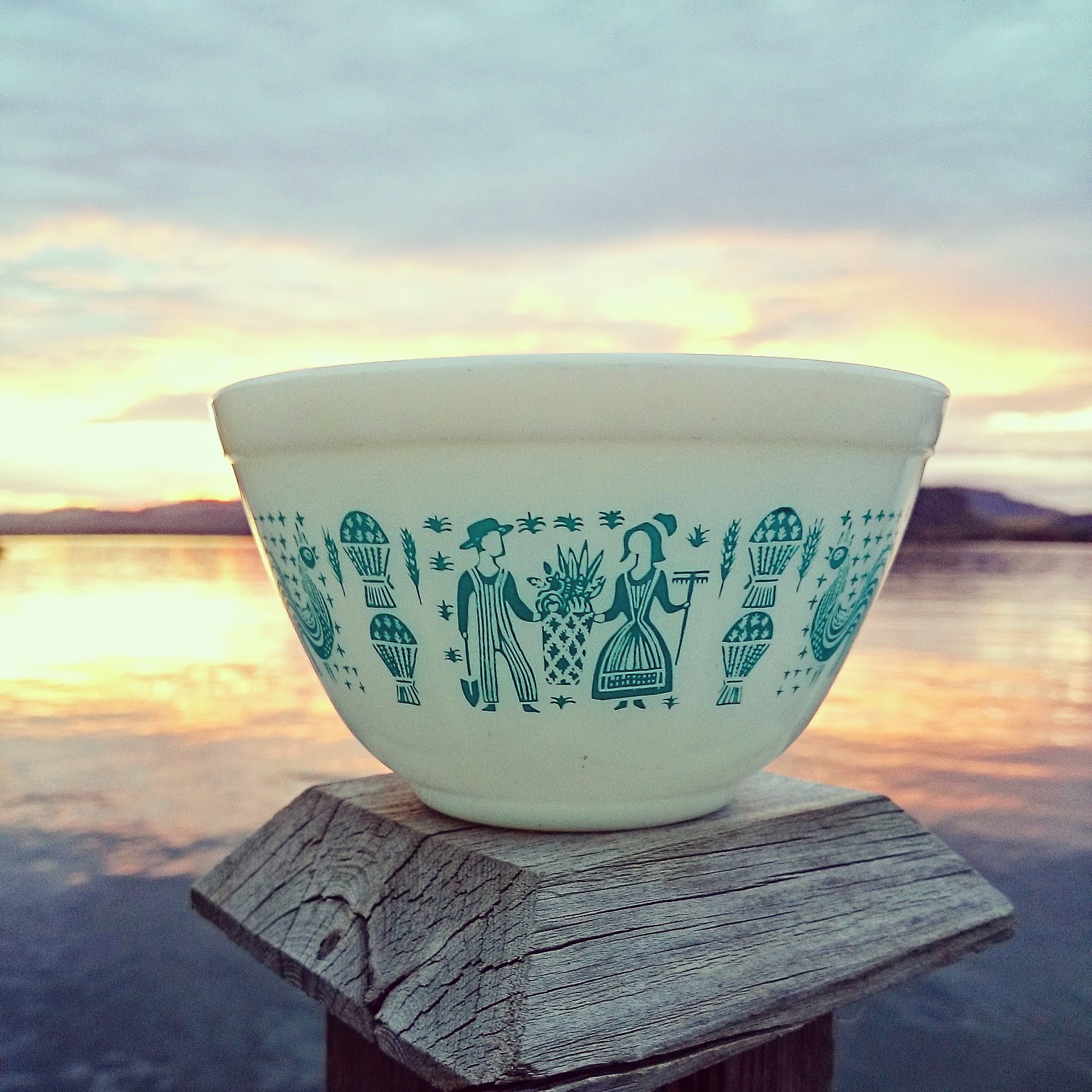 After we moved into the lakehouse, we devised a system for garbage that was not totally unlike what we used before.  In Ottawa we had a garbage bin and then a black bin and blue bin for recycling.  Here we bought a huge new garbage can that holds colossal GLAD bags so we can cram in as much garbage as possible – I really cling to those 50 cent bag tags (could I be any more miserly?).  We bought another huge can for blue bag recycling.  I re-use a carboard box for paper recycling to save a blue bag (miserly!).  Inside the house, a cute aqua bin collects recycling under the kitchen sink, and I bring it outside to sort almost everyday (I try to make trips outside with Szuka fruitful, much to her chagrin – she’d rather we just play).  I haven’t really devised a good system for our garbage inside.  Our old step-can was in the way in our small kitchen and so I used a random lid-less can I found in the house, that the old owner’s left behind.  I stuffed it underneath the kitchen sink when we were working on the house, and there it stayed.  At one point I used GLAD kitchen catchers but when they ran out, I started stuffing various plastic bags I accumulated into the empty box.  It seemed cheaper, but these bags often leaked and some were a tight fit for the can. 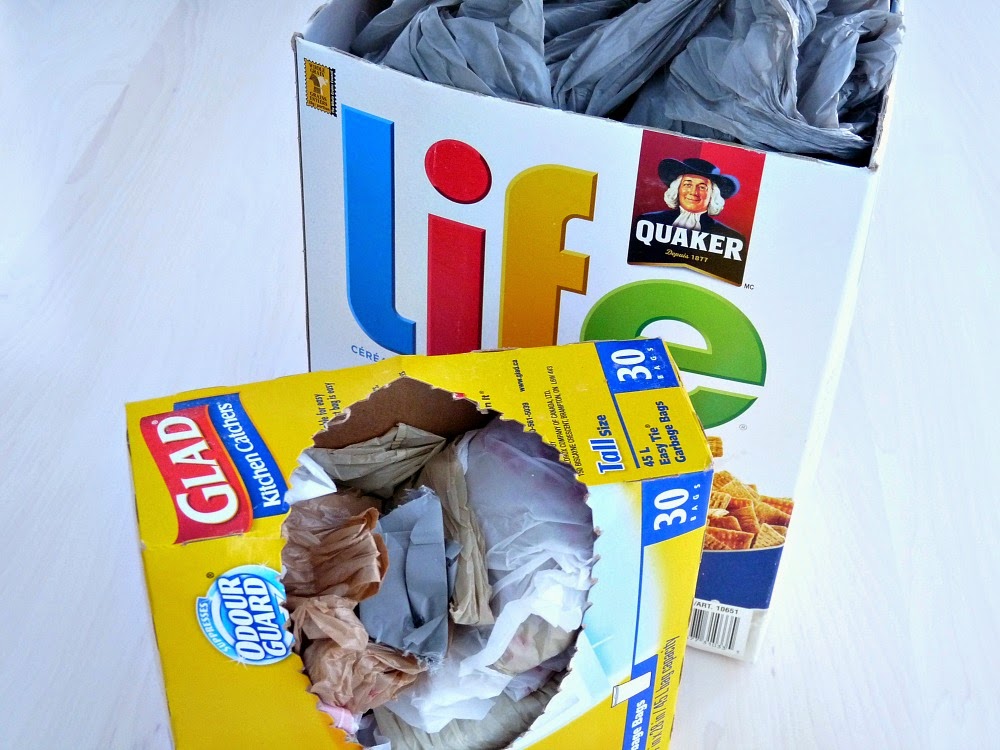 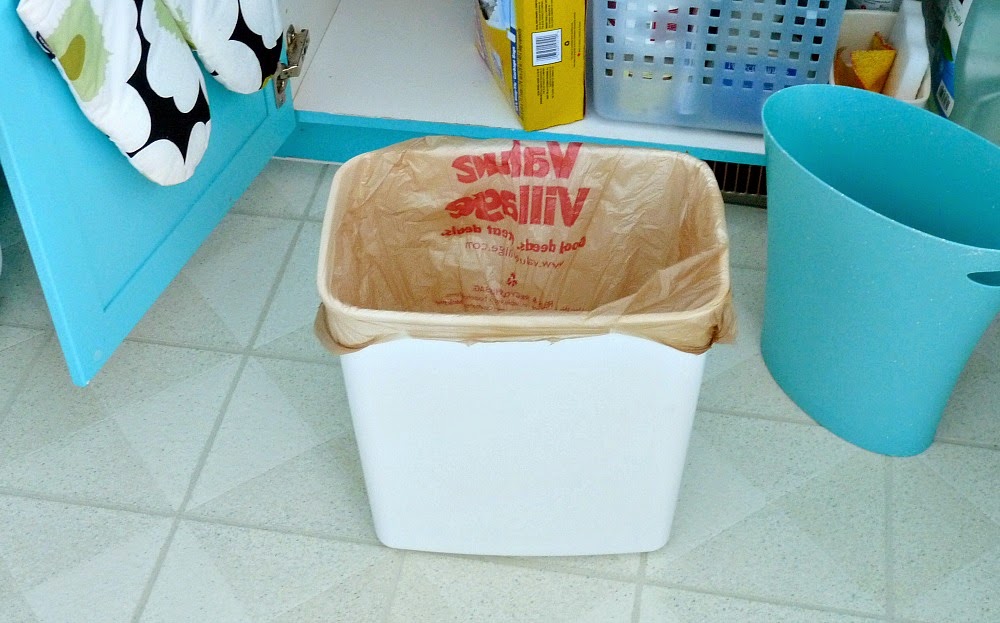 When GLAD offered to send me some product and sponsor a post on trash talking, I was happy for an excuse to ramble on about our landfill and the weirdness of handling our own trash to such an extent, but I was a bit reluctant to use the kitchen catchers.  Surely what I was using was just as good?  And free!  Well, the odor-guard kitchen catchers have sure come along way since I bought my last box.  These new odour-guard bags with Febreeze are fabulous because although they smell perfumed coming out of the box, once they’ve been in the bin they don’t smell flowery.  Instead, they neutralize any odor really well, without just masking it.  It was never atrocious under there because I take the garbage out to garage regularly, but it is garbage so it didn’t smell like roses.  After testing these bags for weeks, I don’t smell anything!  It just smells clean under the sink – these bags are perfect for use with my open can.  And they fit the can with room to spare – no more leaks thanks to too-tight bags splitting.  I’m sold. 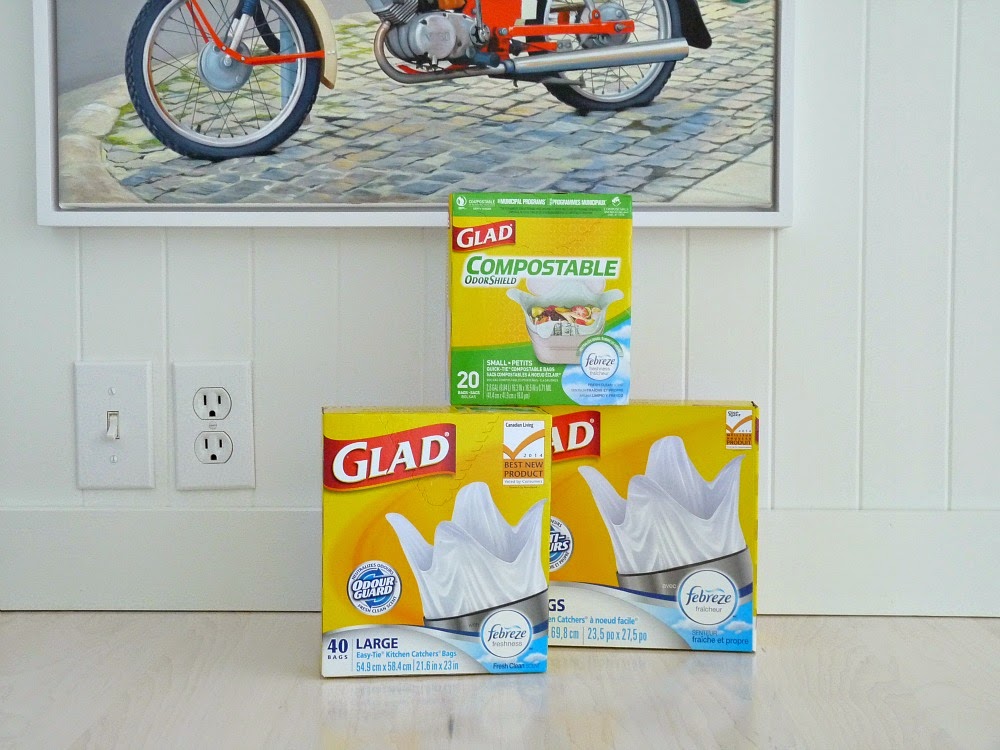 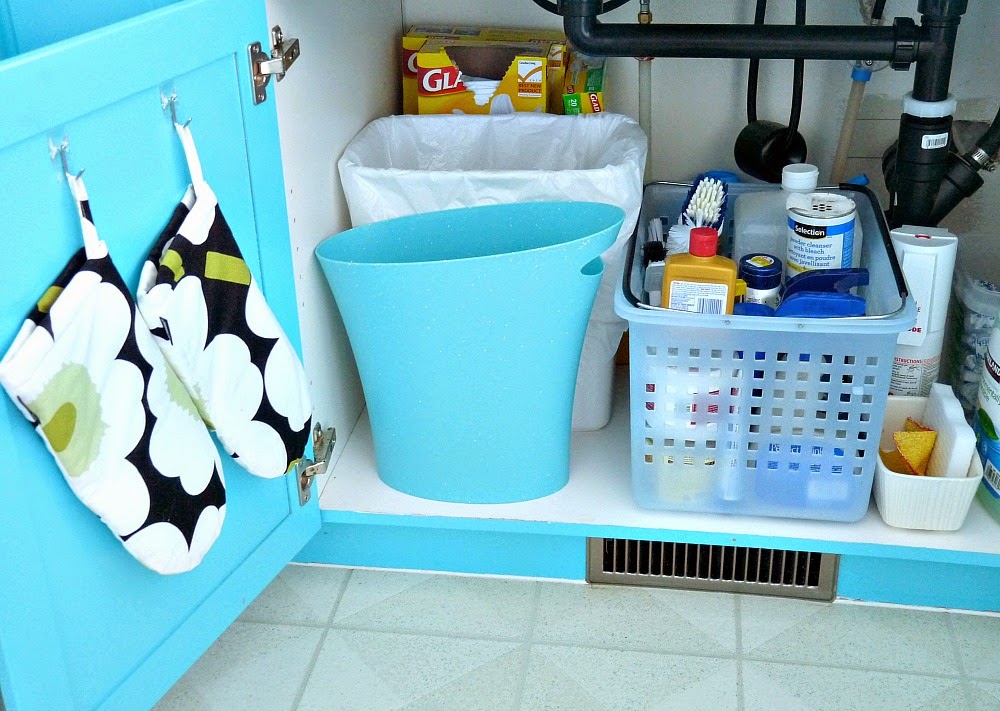 I haven’t tried the compostable bags because we don’t compost.  Isn’t that horrible?  I feel a lot of guilt about that.  I didn’t realize until recently that our dump has a compost section.  I thought we had to compost ourselves, and with my lack of interest in gardening, Szuka the digger, and our bear problem, composting seemed like a nightmare.  I’ll have to make some room under the sink for a compost pail and start!

This post was sponsored by GLAD and I also received product to try out.  The idea for this post and all words and photos are my own – as is the embarrassment I endured taking photos at the dump.  I wasn’t super keen on showing you the under the sink area, because its only redeeming features are that it’s clean (go me!) and it boasts a pretty a pretty aqua can (thanks Umbra!).  I have not washi taped or pattern papered anything.  Bad blogger!  While garbage and garbage accoutrements are certainly not the sexiest topics to blog about, particularly in the absence of any beautification, products that make our day to day lives a little nicer are worth their weight in gold! I’m happy for this opportunity to re-think what products I’m using. Maybe getting stuck with my garbage for a month won’t be quite so smelly this summer? Stupid landfill hours.