Tuesday I showed you some of the elements I’ve already chosen for our impending bathroom reno: walnut cabinetry, modern fixtures, a toilet with a skirted trap – easy decisions!  The tile and counter-top choices proved to be more difficult, mostly because I struggled with availability and affordability.

I fell in love with Fireclay Tile and was convinced that I was going to order some – until I priced it out.  A rough estimate for what we’d need saw our eyes bugging out over a lot of zeros (about $4,000+ just for the tub surround).  I don’t have that kind of money for tile and, if I did, I don’t even think I’d want to sink $4000 into something that will get covered by a shower curtain anyway.  (This is my poor loser pep talk.  Of course I would!  Their tile is gorgeous and mod and I want it.)

Although I’d happily take any style, I wanted to order the Diamond Contour (below), but in all-white. 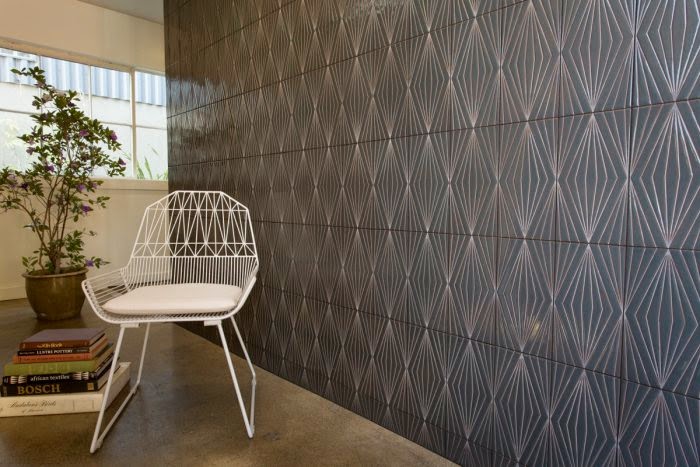 Although I ultimately had to pass on Fireclay Tile, pining for the styles above altered my plan.  I originally had my eye on some beach-glass inspired tiles, but I realized that I was really gravitating toward organic shapes with more texture than colour.  Yes, although I drooled over beautiful, bold spaces like the bathroom below, ultimately I chickened out.

After I vetoed Fireclay, I had a hard time finding something I liked locally.  (Nothing compares, to you…)  When I found a tile I sorta liked, it would compete with a counter I also sorta liked, and vice versa.  I finally decided to just find a starting point – stop worrying about matching and pairing and just find either a tile or counter that I absolutely loved, and then let that dictate the other choices.  I spent days shuffling from place to place, dejectedly flipping through tile samples and lugging home chunks of rock and porcelain.  Living in a small city can have it’s drawbacks because the options are really limited (and some of what is available is kind of dated).  After all of my laborious effort, finally – I found it.  A beautiful piece of quartzite: 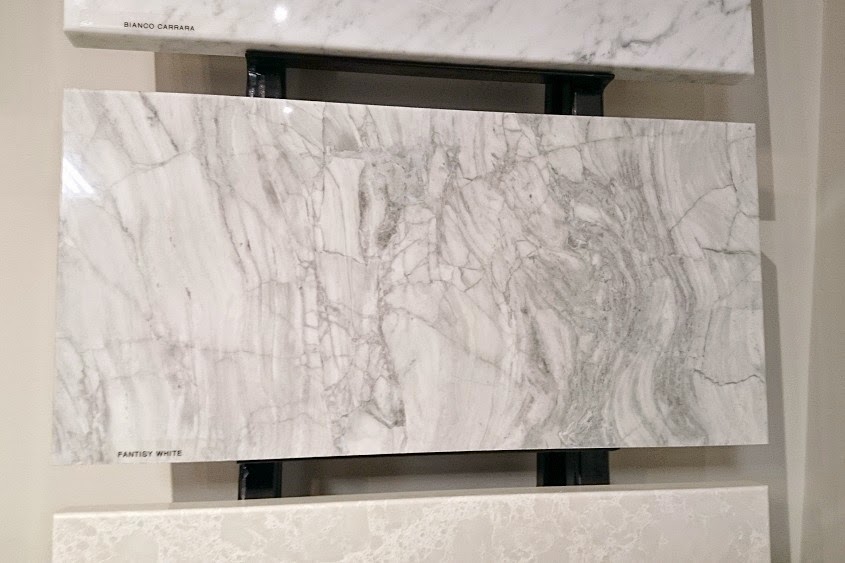 The sample called to me from across the room.  Actually a friend (Jazmyn, that’s you!), had talked to me about this gorgeous stone awhile ago but I didn’t think to search for it.  It’s White Fantasy, just one variation of quartzite, which is supposedly as hardy as granite but with a similar look as marble (my nemesis).  If you read Yellow Brick Home, you might have spotted another variety of quartzite.  At a local stone yard, I found a huge piece for sale and I am thinking of already putting a down payment on it so no one else can nab it. 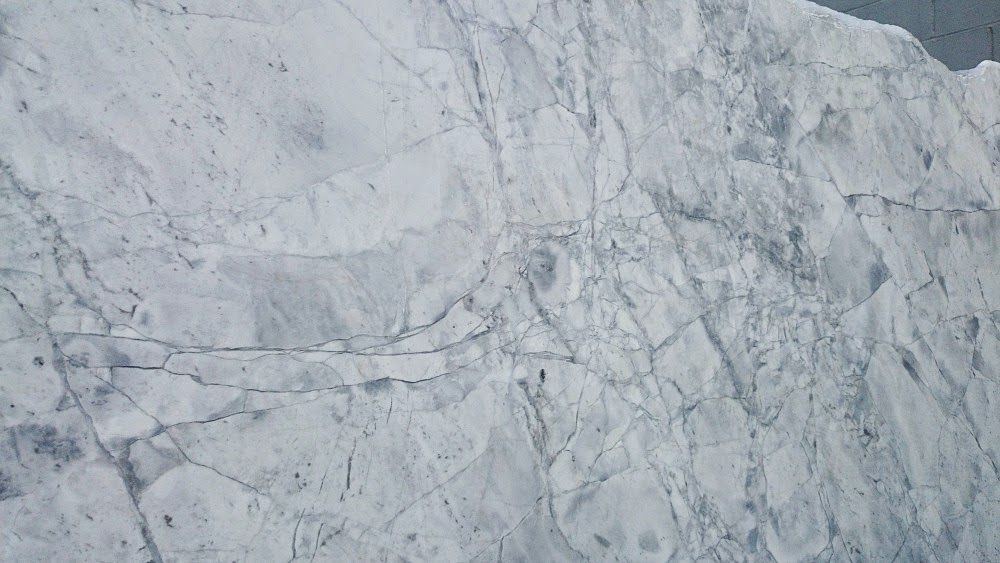 It looks a bit flat (and cold) in my photos, but in real life there are these incredible veins and layers – it has a lot of depth to it with varying shades of warm and cool grey, balanced by some white.  Some of the veins have a really striking glint to them.  I managed to capture a hint of an elusive glint in this photo: 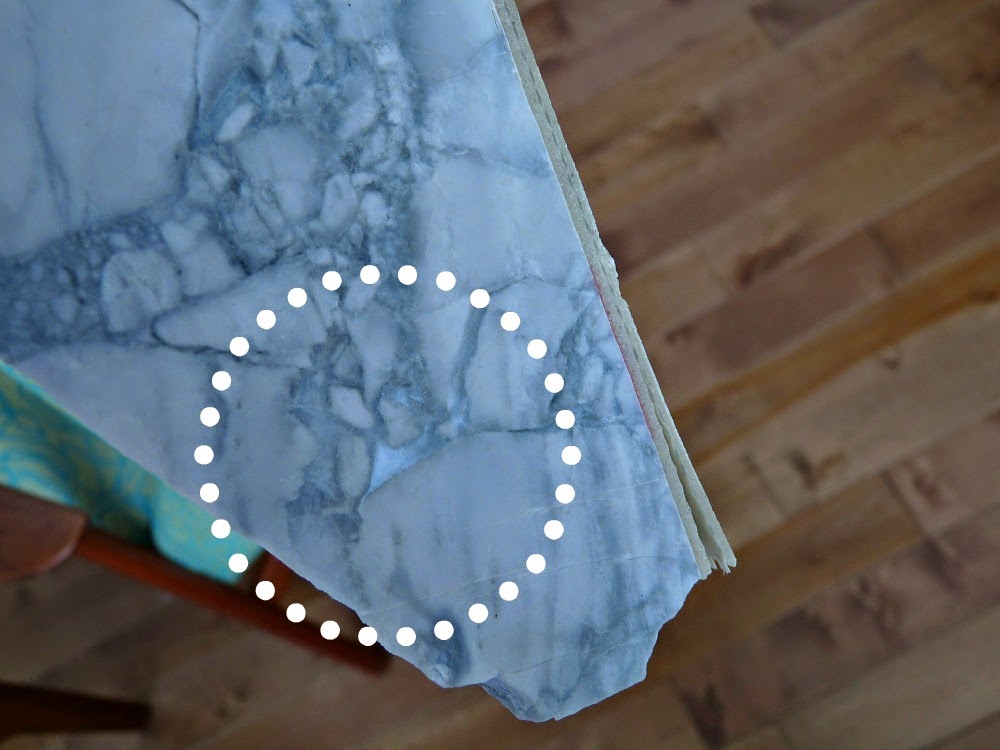 Hubby likes it because it reminds him of when the ice cracks and breaks on Lake Superior.  To me it looks like a map.  I actually would have loved to find the Aquias Blue quartzite below, but no luck (I think the grey will serve us well, anyway):

Because everything is going to be neutral, I am thinking about ordering a pair of soft aqua sinks:

Below is a kitchen that, although a really different style, boasts quartzite counters with aqua Kohler sinks. (I really like seeing photos of something similar to what I like.  In my mind I cobble all of these images together and picture my bathroom, all renovated.)

I like the look of a really tall stone backsplash, but because it really should be a thin piece to look right (I don’t want the same thickness as my counters, glued to the wall), I’ve been told by local installers that it’s not doable.  They can’t get the quartzite thin enough.  Which is a big bummer.

I am thinking of just going without a backsplash, because it can easily be added later and we didn’t seem to need one in the townhouse.  Hubby is adamant we at least get a little stone backsplash.  Not sure what to do there because I don’t know if I like that stubby little backsplash, but I think tile will be busy above the stone. 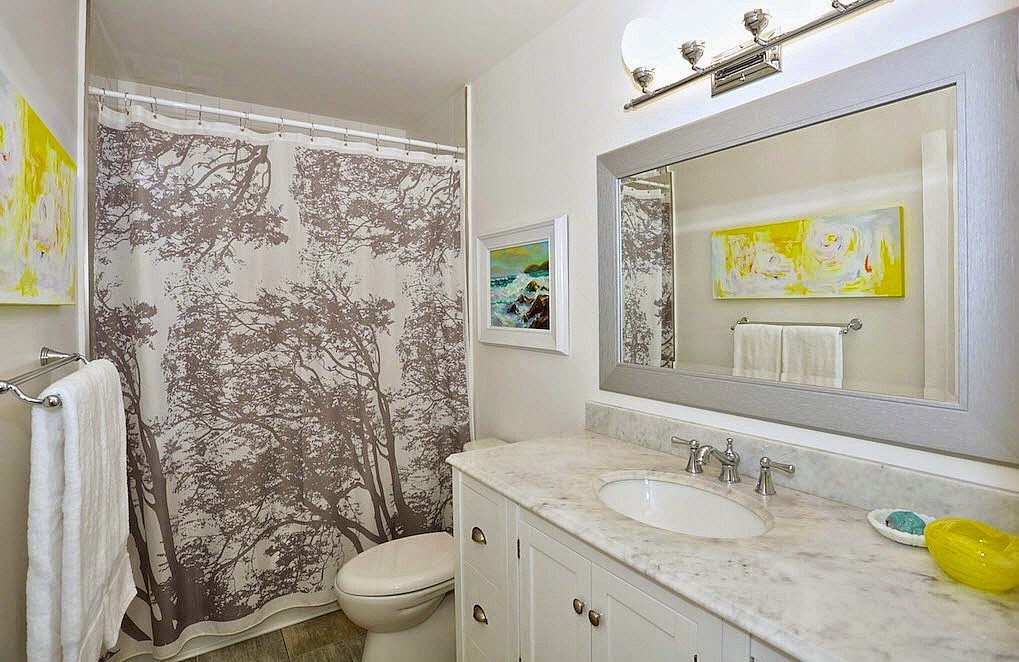 Once I settled on a counter, picking tile was easier.  A bit.  I originally envisioned grey tile, but with a stone counter that reads very grey, it seemed a little blah.  I considered a white porcelain, but it just didn’t “click” for me, even though it bounced a lot of light around and made the room feel bigger and brighter. 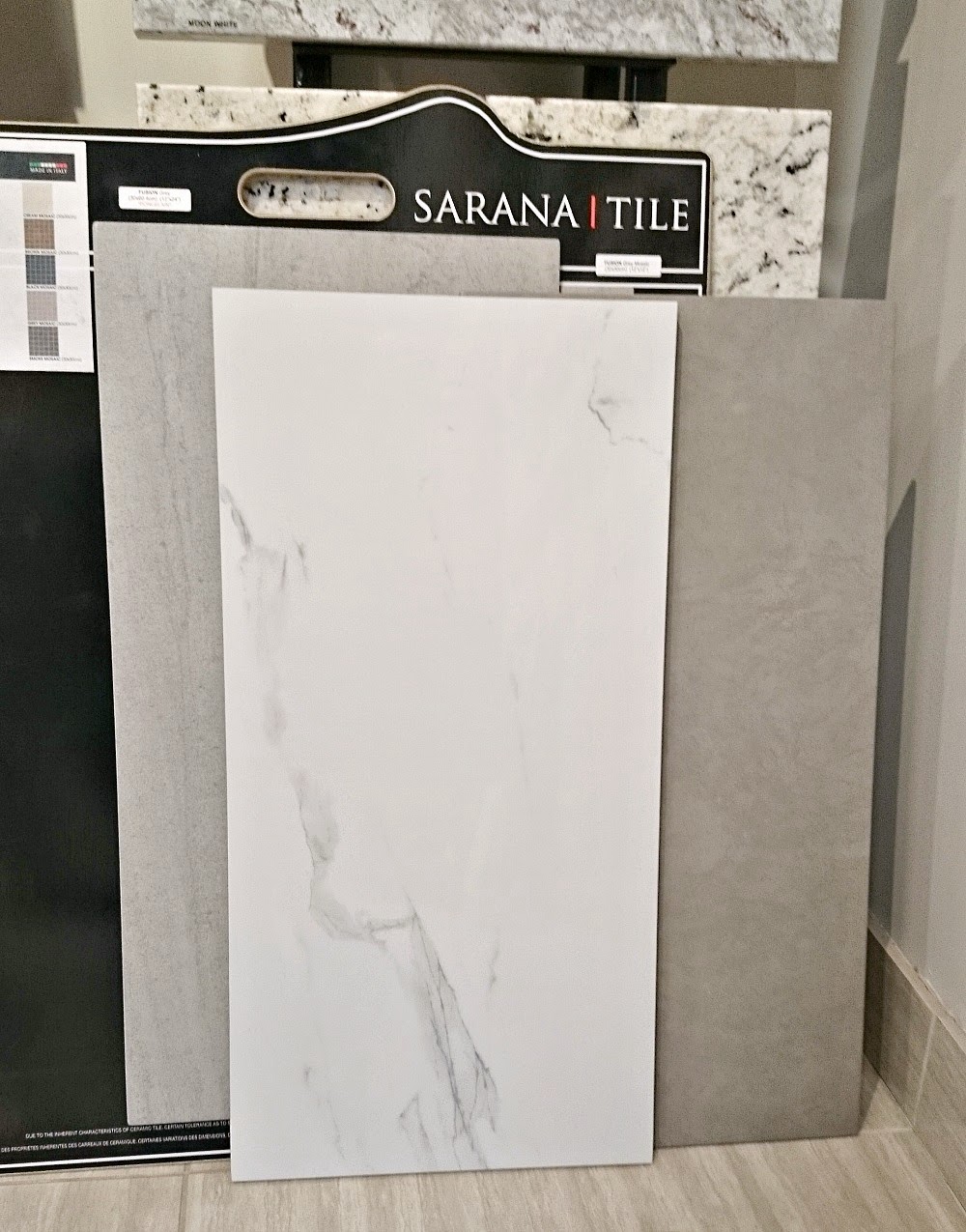 In the end, while pondering various shades of grey tile, I found the perfect floor tile by accident. 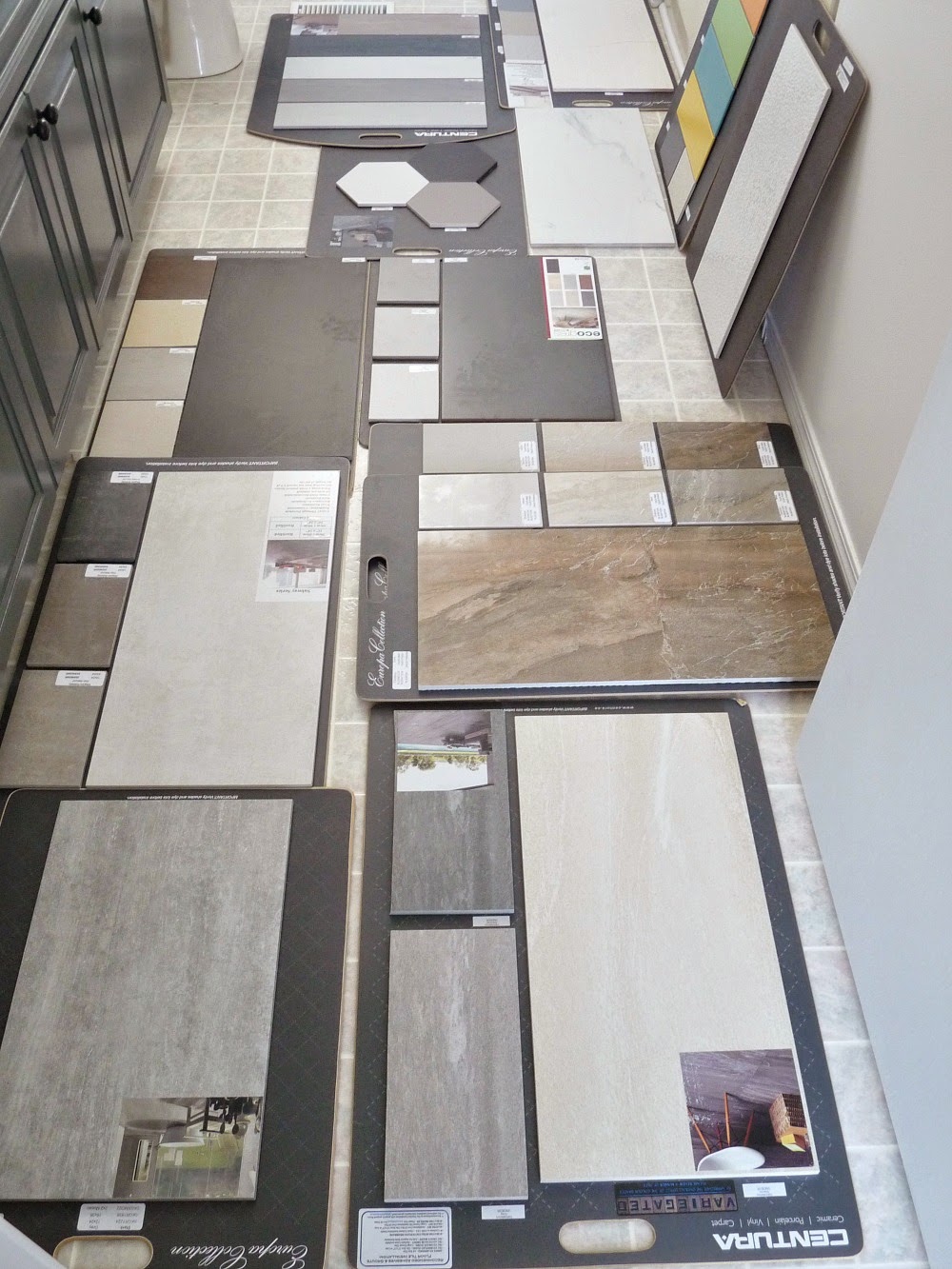 The soft black on the right stood out. 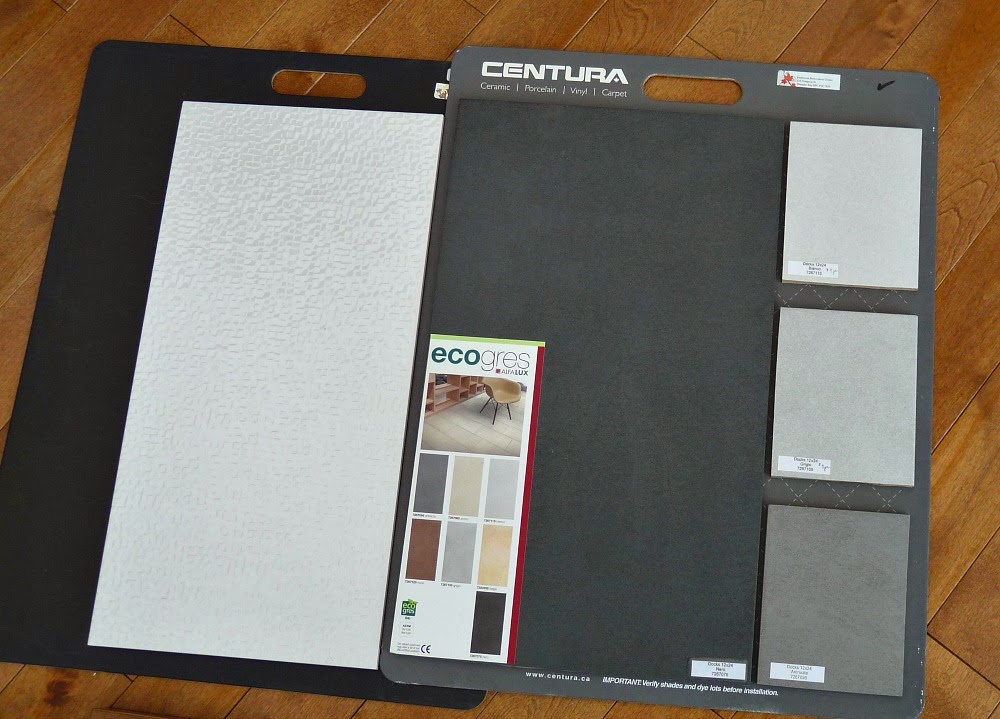 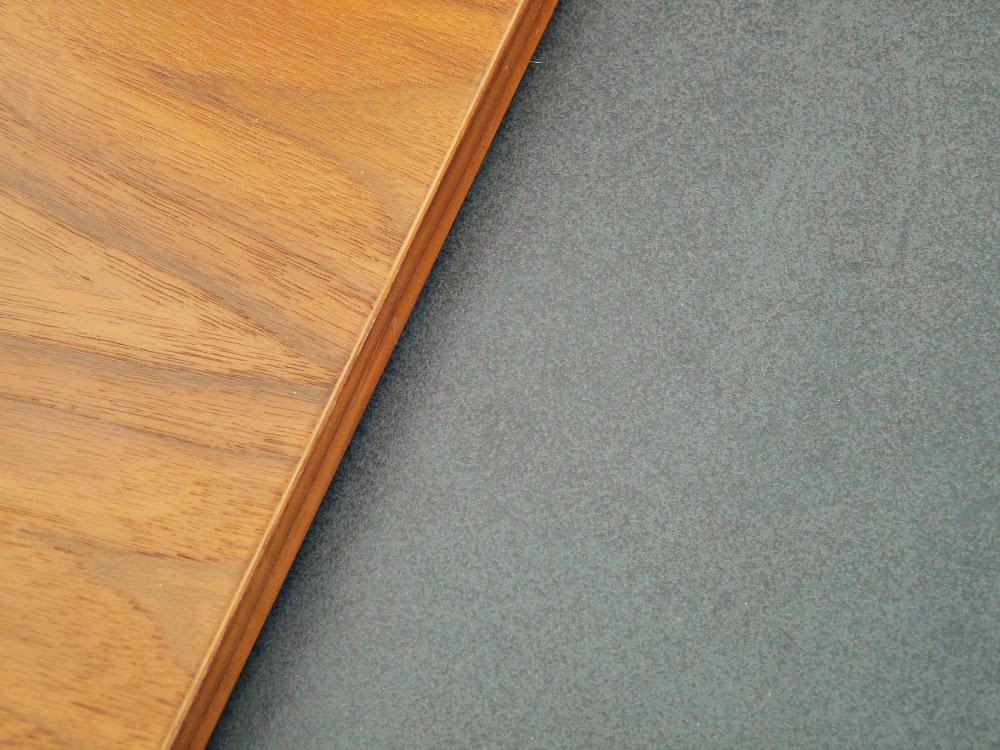 It’s a really nice black: not too dark or too blue, and it has a nice warmth and softness to it.  It has a subtle variation in colour, like slate.  It seems more matte in photos – in real life it has a perfect not-too-shiny, not-too-flat finish.  The contrast between it and the light grey counters elevates the plan from “everything is grey” land.  I’d love it with a matching grout – the picture below has a similar tile, but with lighter grout.

I actually considered a large black hex (which I would also do with black grout), but I just don’t think I love hex enough to commit to it, plus it competes with the tub surround tile I love. 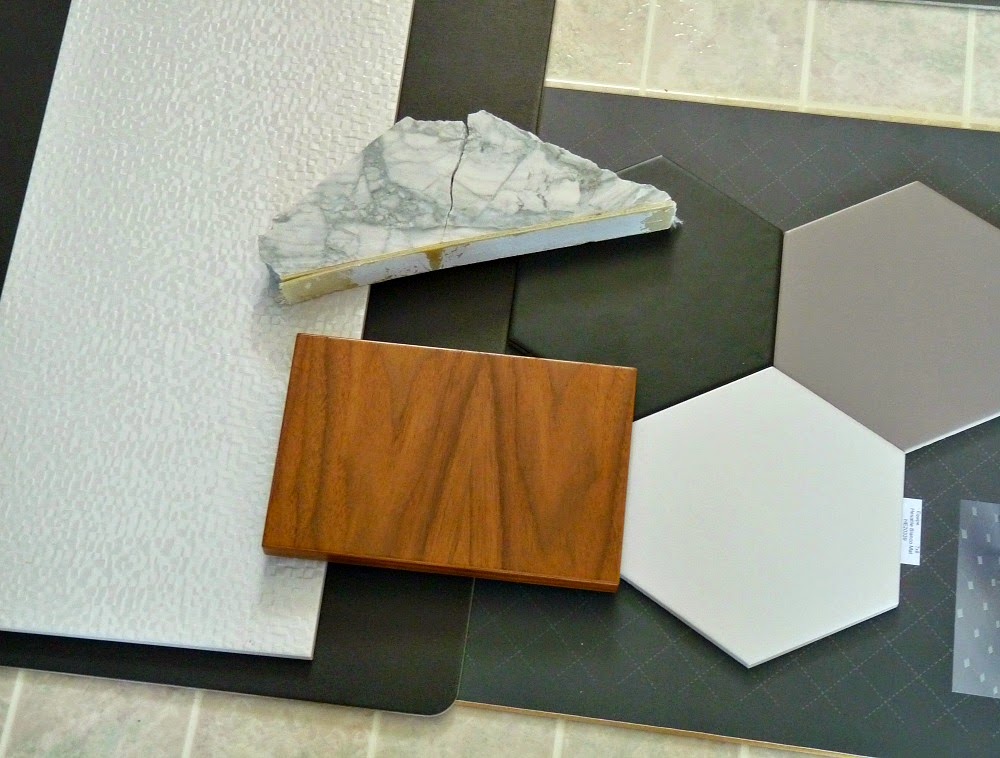 This one was a contender too, because I love the striations and the sutbtle sheen – it’s like it was shot with silver – but ultimately I’d love a bigger tile for as few grout lines as possible. 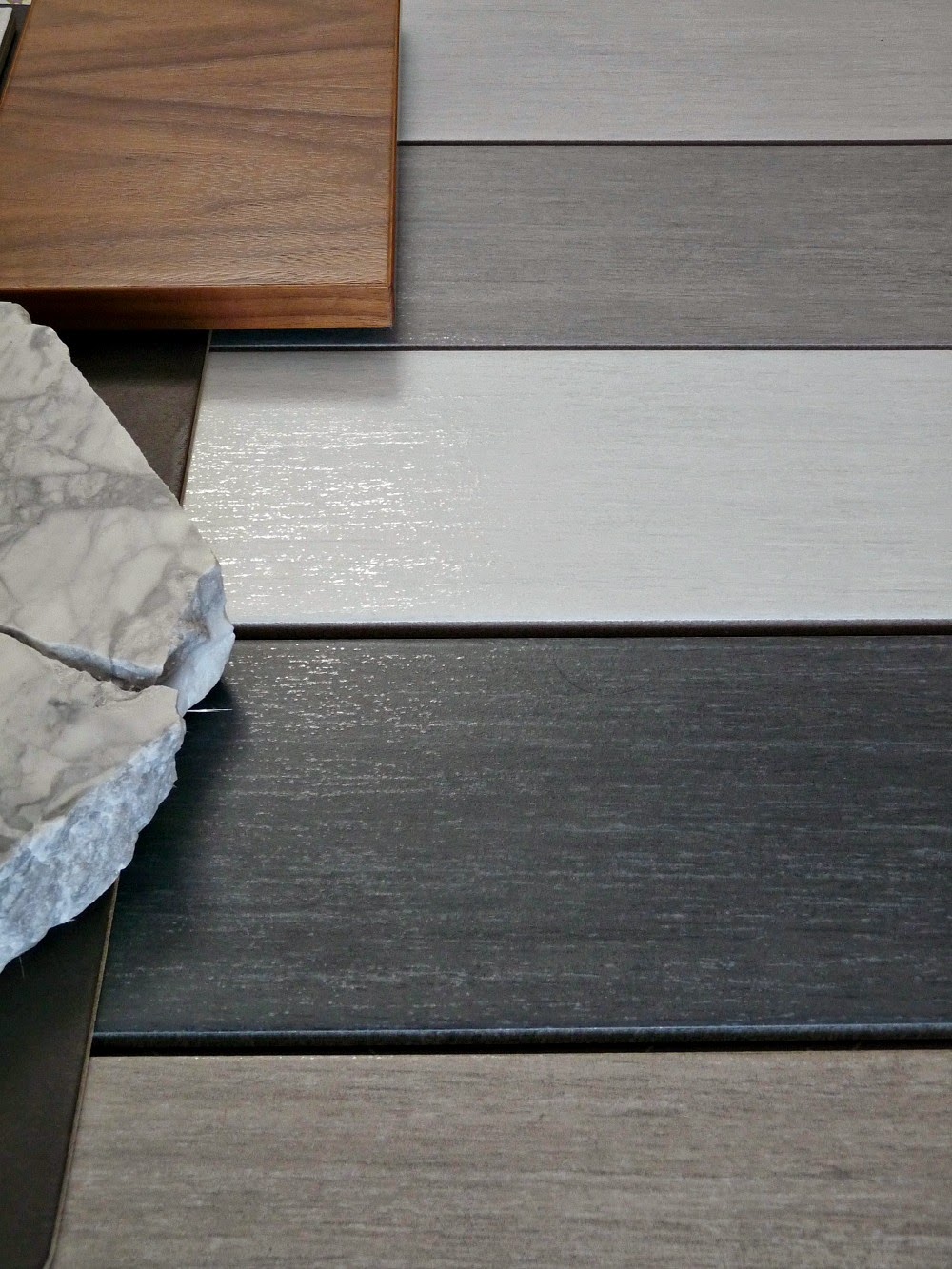 For the tub surround tile, this white tile with a great sheen and a square pattern is my favorite.  When the little irregular squares catch the light, they almost look like square mosaic – which is such a classic tile option – but without the myriad of grout lines. 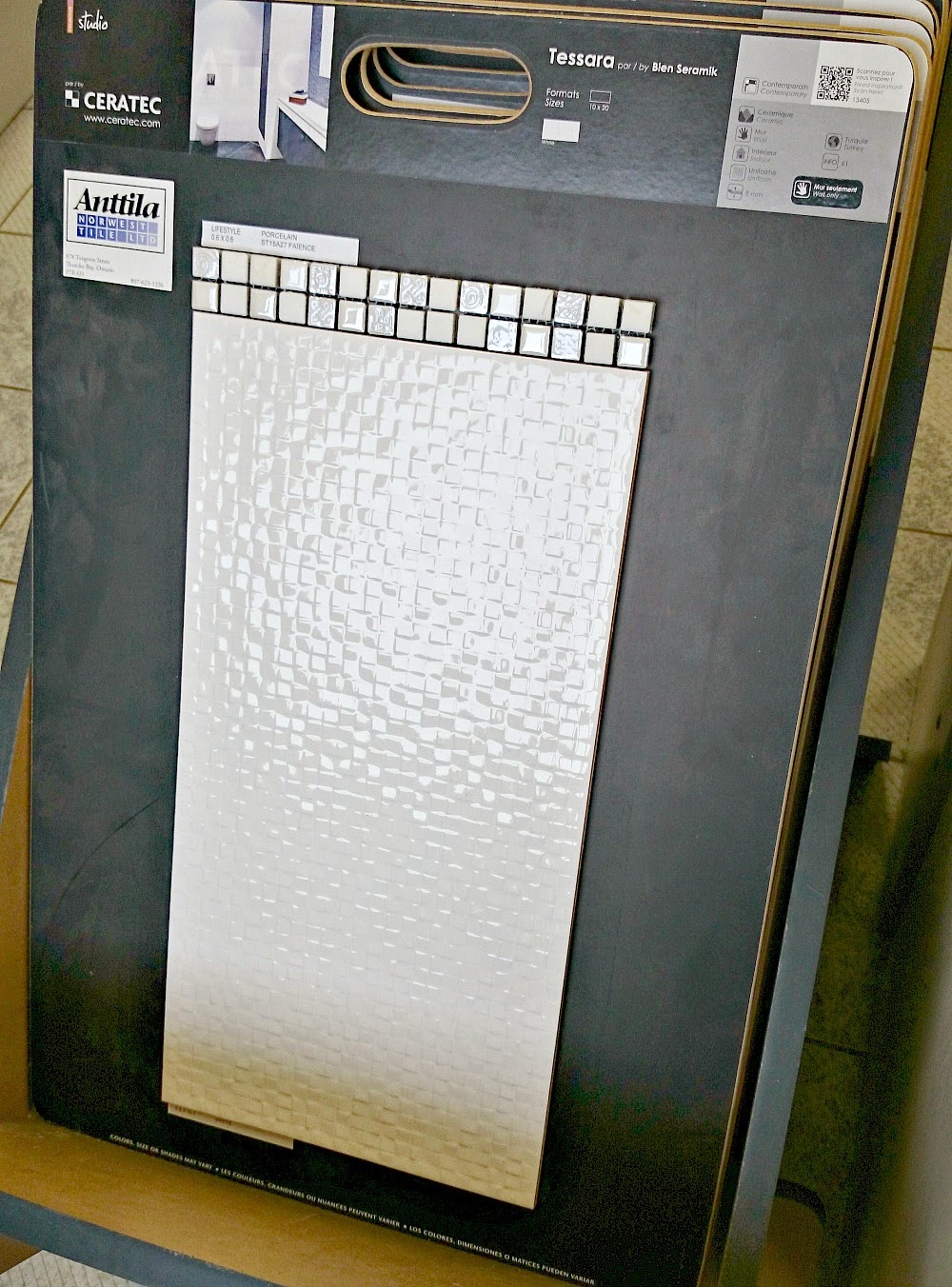 I really like mosaic tile but I don’t like grout, so the tile above will give me the best of both words.

WHEW!  And that’s how I mostly arrived at decisions about tile and counter.  I really thought I’d have a long short-list today, but yesterday I really focused and narrowed down the many samples I had brought home.  This post feels ginormous.  If you feel like this post was way too wordy, you’ll get no sympathy from Hubs, for whom this is just a sampling of the endless chatter about tiles, counters, and cabinets to which he’s been subjected.  These feel like huge (expensive) decisions, so I’ve been agonizing over each one.  In the end, I’m going with my gut: the gleaming small square tile just kept calling to me and I plucked it out of displays in four different tile stores.  I knew I wanted the quartzite the moment I saw it – the rock collector in me won’t be happy with a man-made solid surface.  The soft black floor tile just looked so right and stood out to me from an impossibly deep sea of sample tiles.

We’re placing order for the cabinetry and likely the counter soon – but nothing is written in stone yet!  Feel free to chime in – especially if you’ve had any experience with quartzite or porcelain tile, which are both new to me!  If you’re curious about the bevy of inspiring bathrooms I’ve been digitally hoarding, take a look at my Bathroom Reno Plans board on Pinterest.  You can also follow me on Instagram, where I recently shared a beautiful teal tile (that, sadly, didn’t make the cut), and other sneak peeks.

Here’s a look at the samples all together – you’ll have to envision a pair of soft aqua sinks. 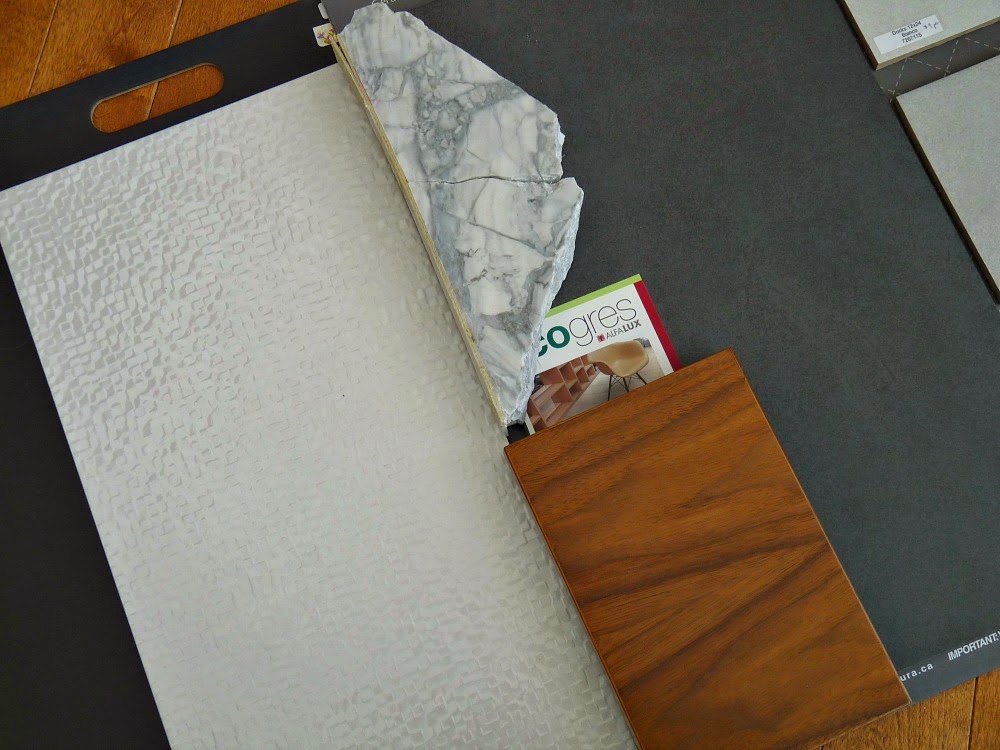 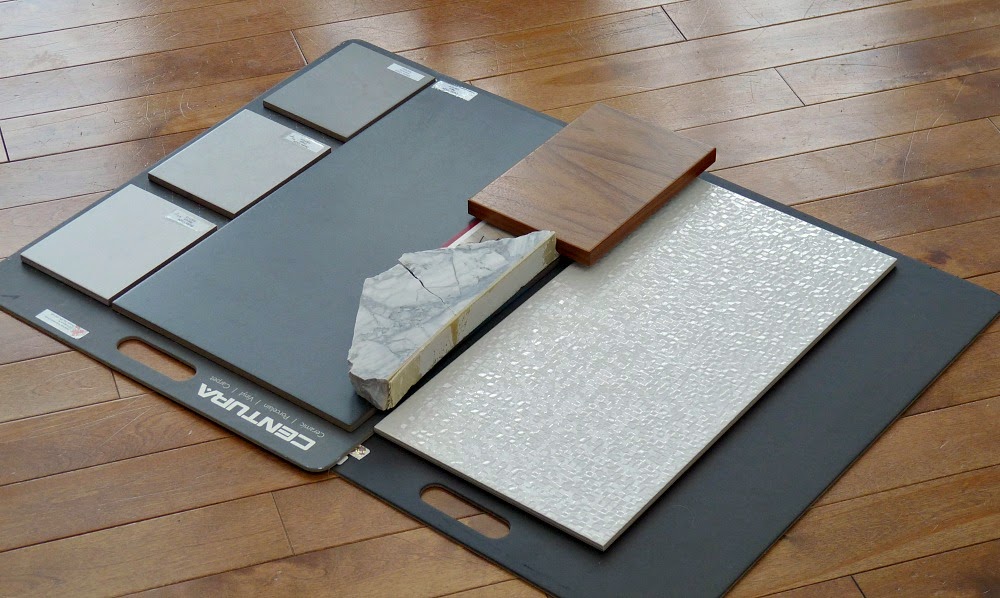 Now, time to lug 100 pounds of tile samples back into town…