Last time I chatted about the bathroom reno, thing were progressing smoothly, if a bit slowly.  We had finally ordered the cabinetry, tile, fixtures, lighting and put a deposit on a gorgeous slab of quartzite: 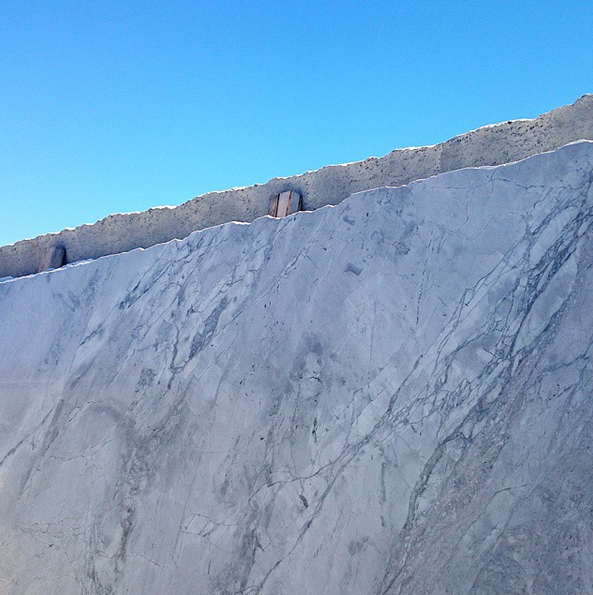 By the middle of May, our garage was full of bathroom fixtures: the toilet, faucets, lights, aqua sinks, etc., had all arrived.  It was incredibly thrilling to unwrap the aqua sinks! 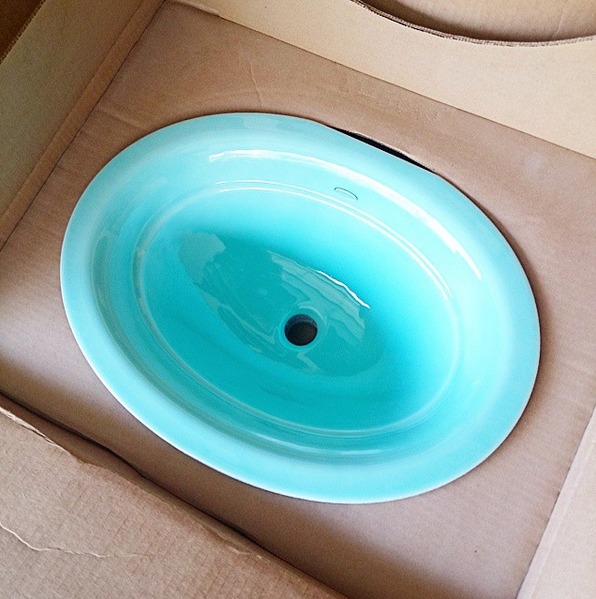 Meanwhile, we had ripped out the original vanity, counters, mirror and sinks – here’s a reminder: 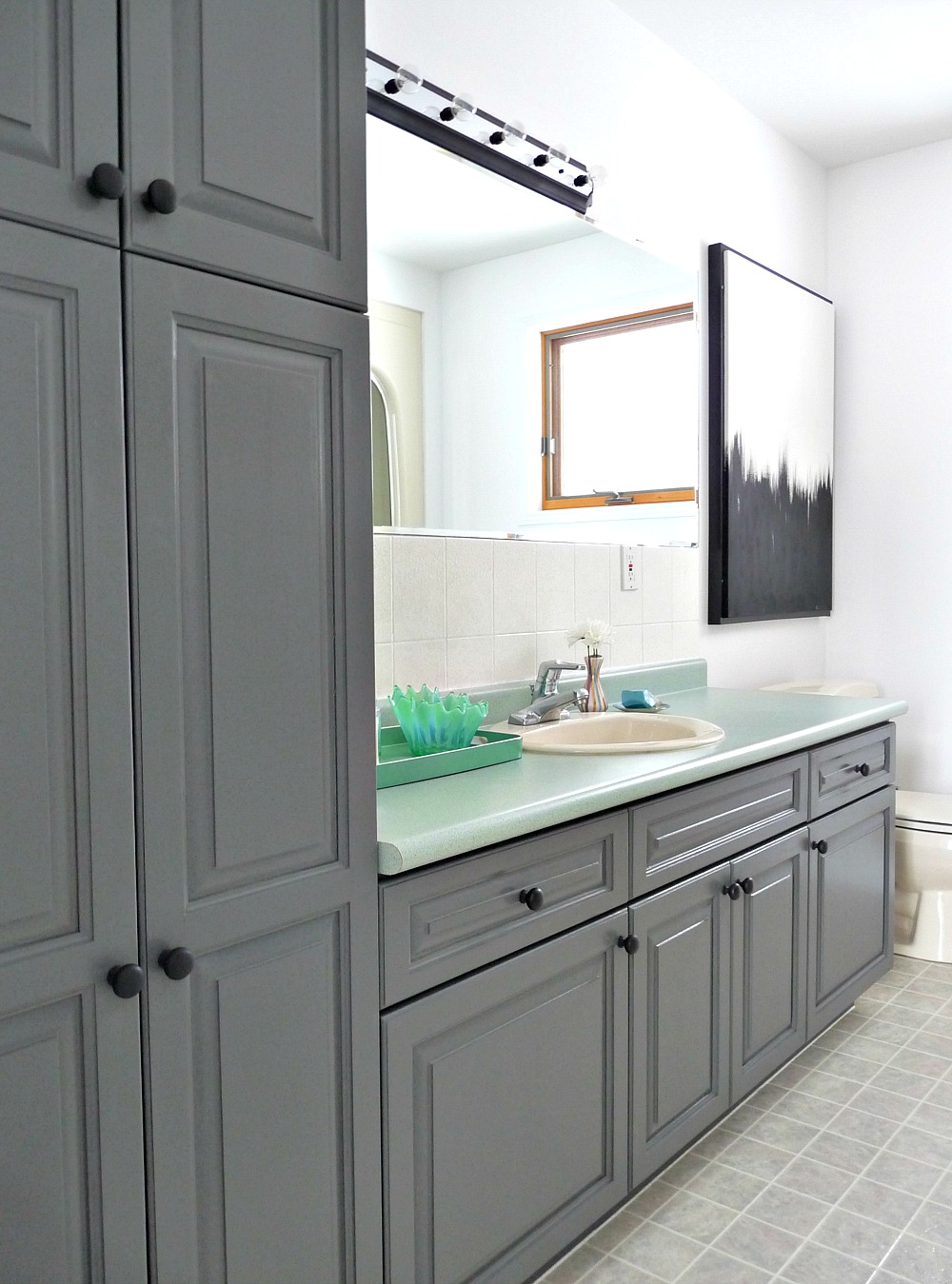 It was dusty, crummy work – no surprise there – but we had to laugh when we saw the “bandaid” solution the former homeowner had devised to keep the mirror clips from scratching the back of the mirror: 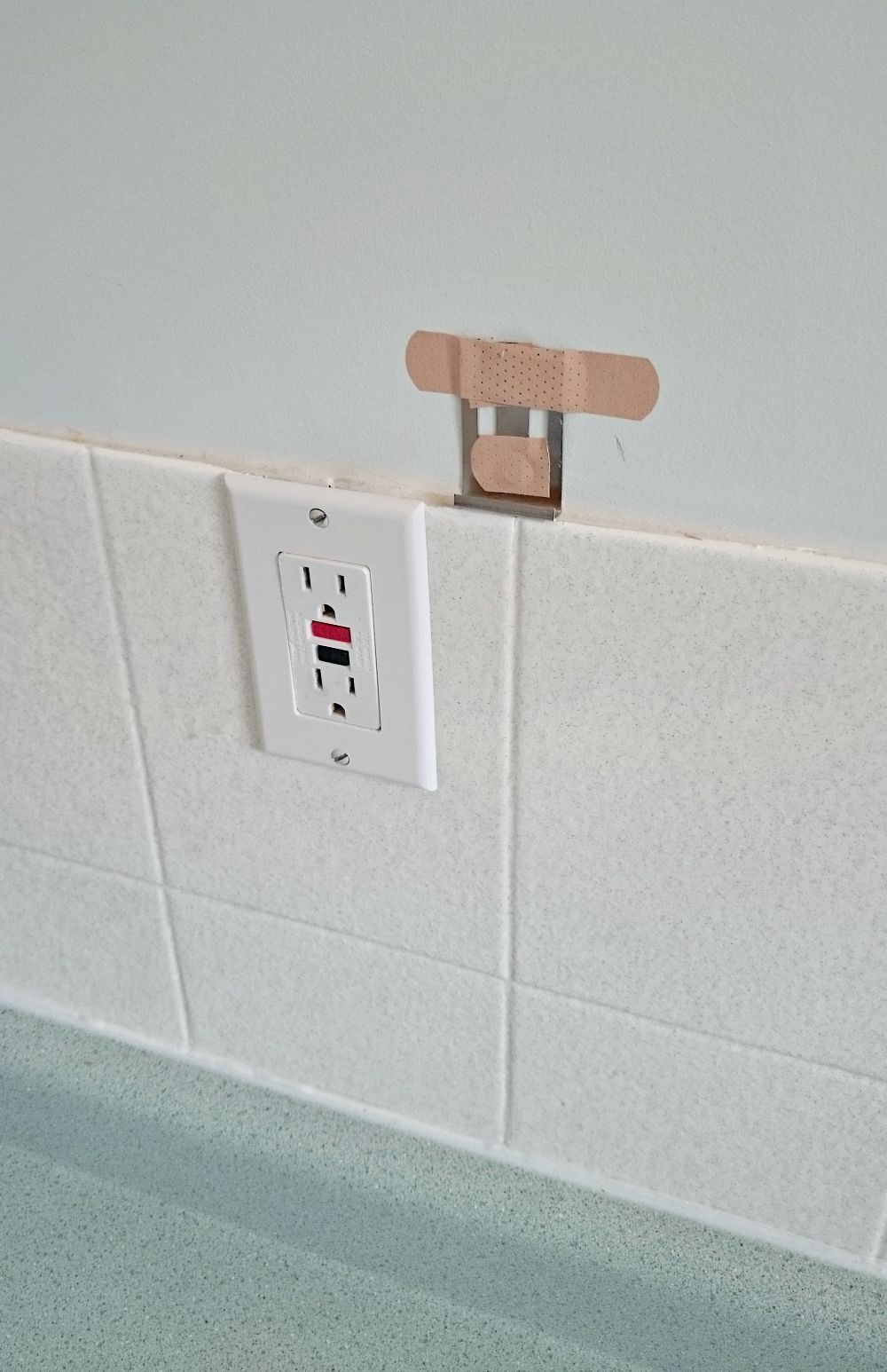 Two of the walls came down and a lot of time was spent moving the wiring for my crazy triple sconce on mirror idea.  We also added another outlet (because we switched from one sink to two, and we figured it would be convenient to each have an outlet nearby) and changed the location of the original one.  Everything took forever because of the careful measuring and triple checking for placement.  Additionally, we had installed some bracing for the floating cabinetry – which also needed to be placed just so. 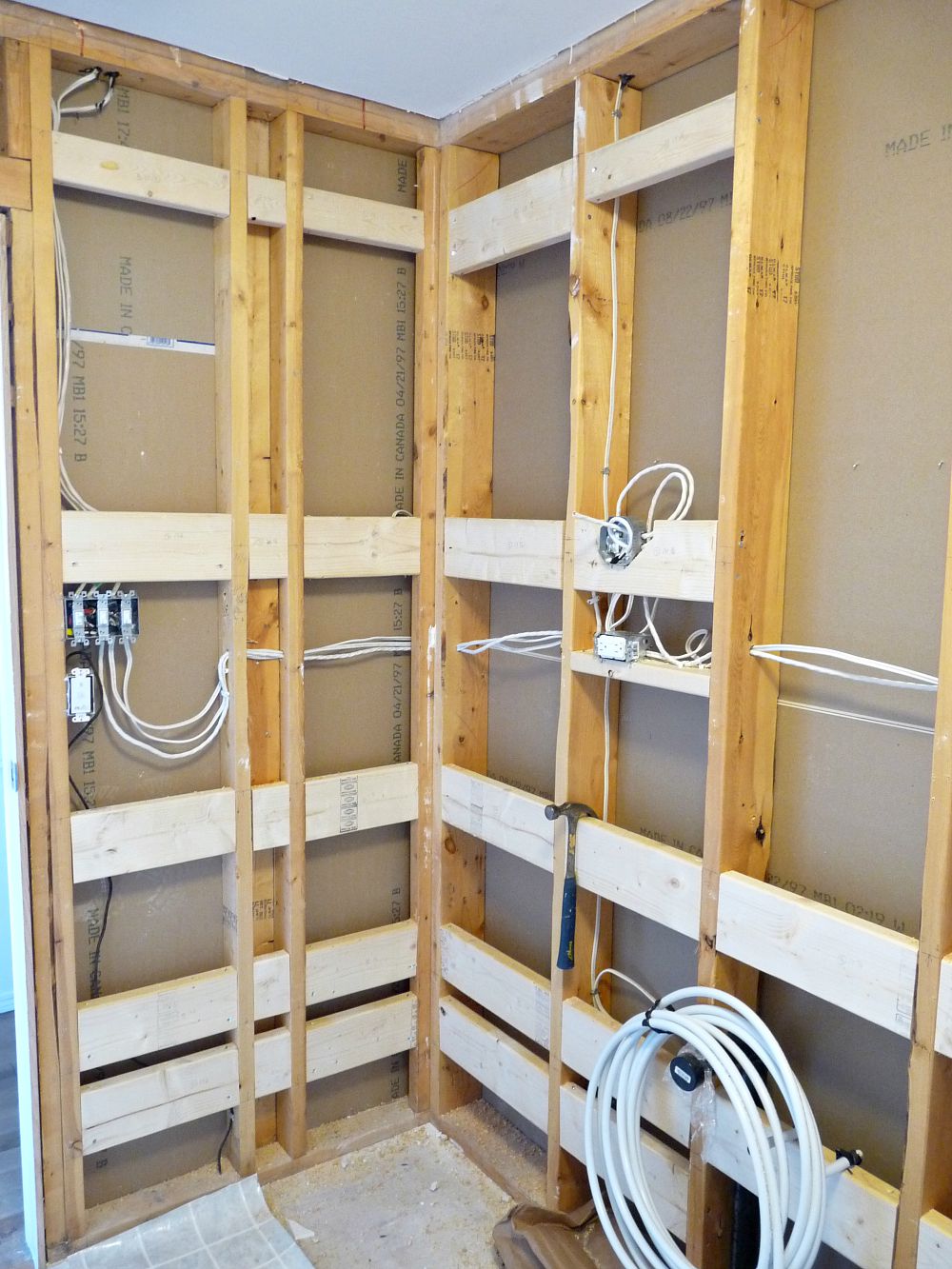 Then, tragedy struck and we left home suddenly.  We dropped everything.  I was gone for six weeks and whenever Hubby wasn’t working, he came to be with me and help my family.

When we finally came home, we were both exhausted.  It took a few weeks for us to get back into the swing of things, but eventually we re-started work on the bathroom.  On the one hand, it was painful because it was the last thing we wanted to be doing, but we couldn’t turn back!   We would have much preferred to spend the rest of summer just hanging out by the lake and processing things but, on the other hand, it was nice to have a project to distract us.

The wiring was completed, the blocking was done, and so drywall went back up. 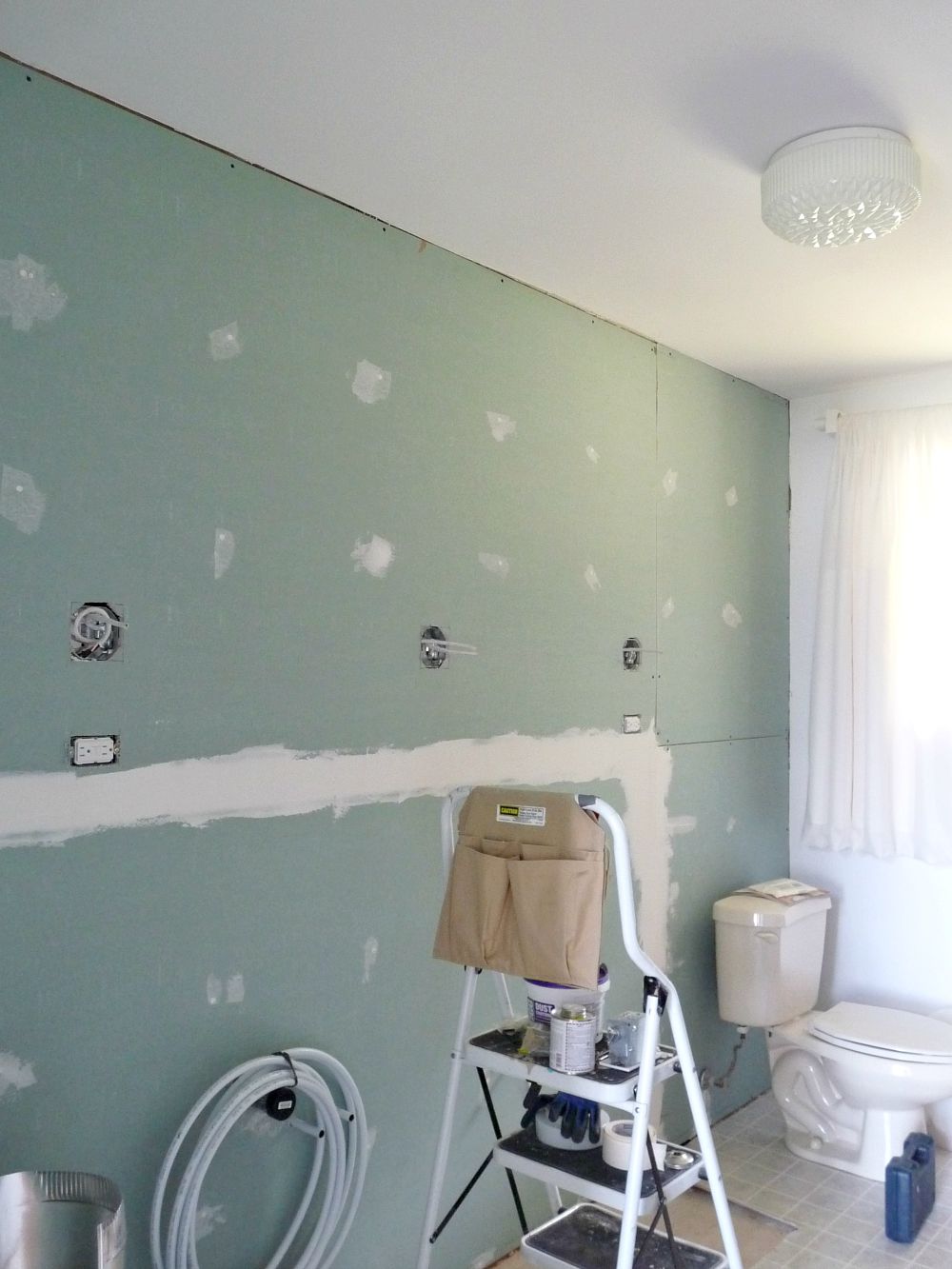 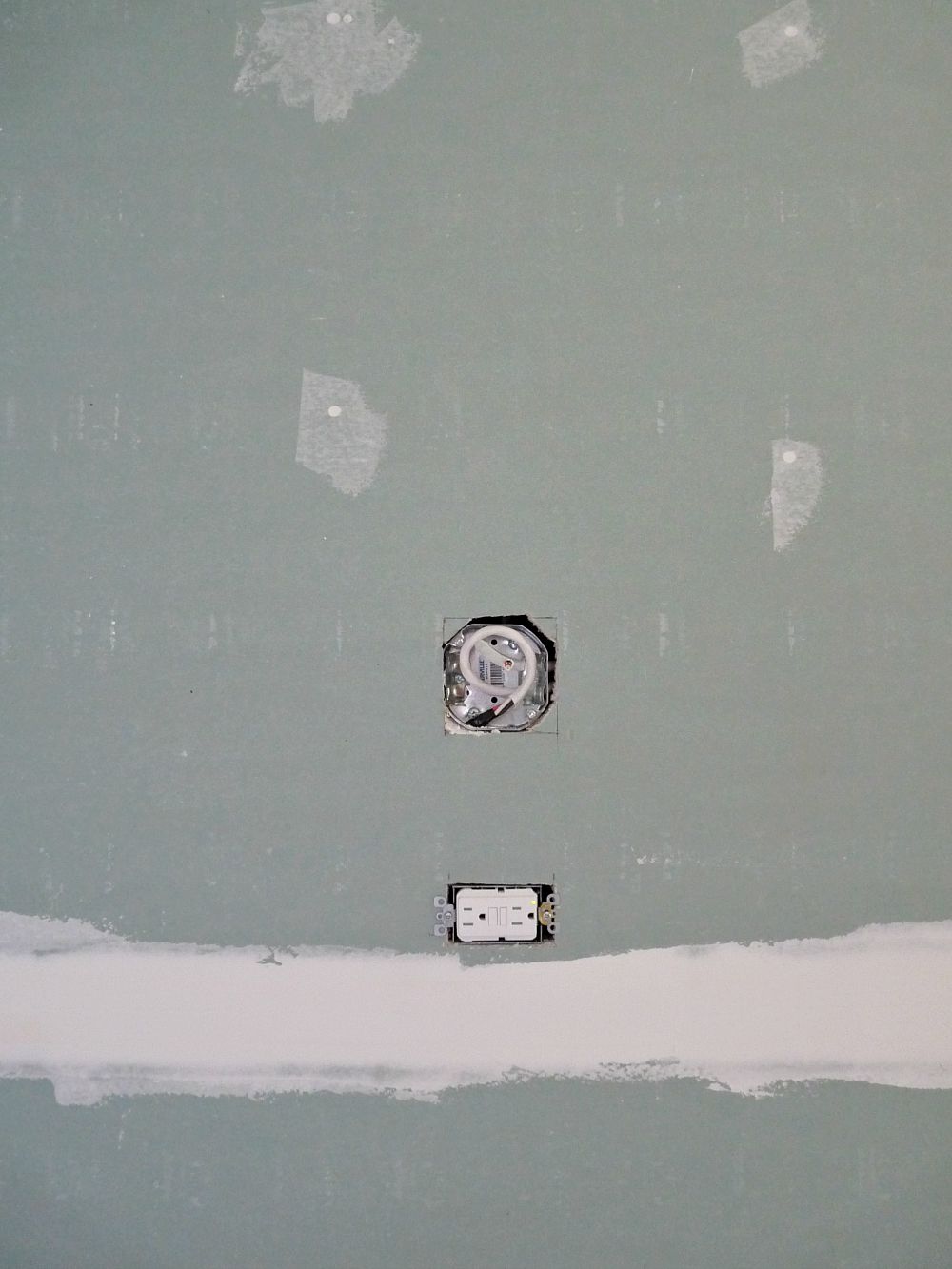 Then Hubby took on the behemoth task of sawing apart and removing our space portal bathtub.  We bought a reciprocating saw for the job and, one broken and one bent blade later, the fiberglass tub and surround lay in pieces in the carport. 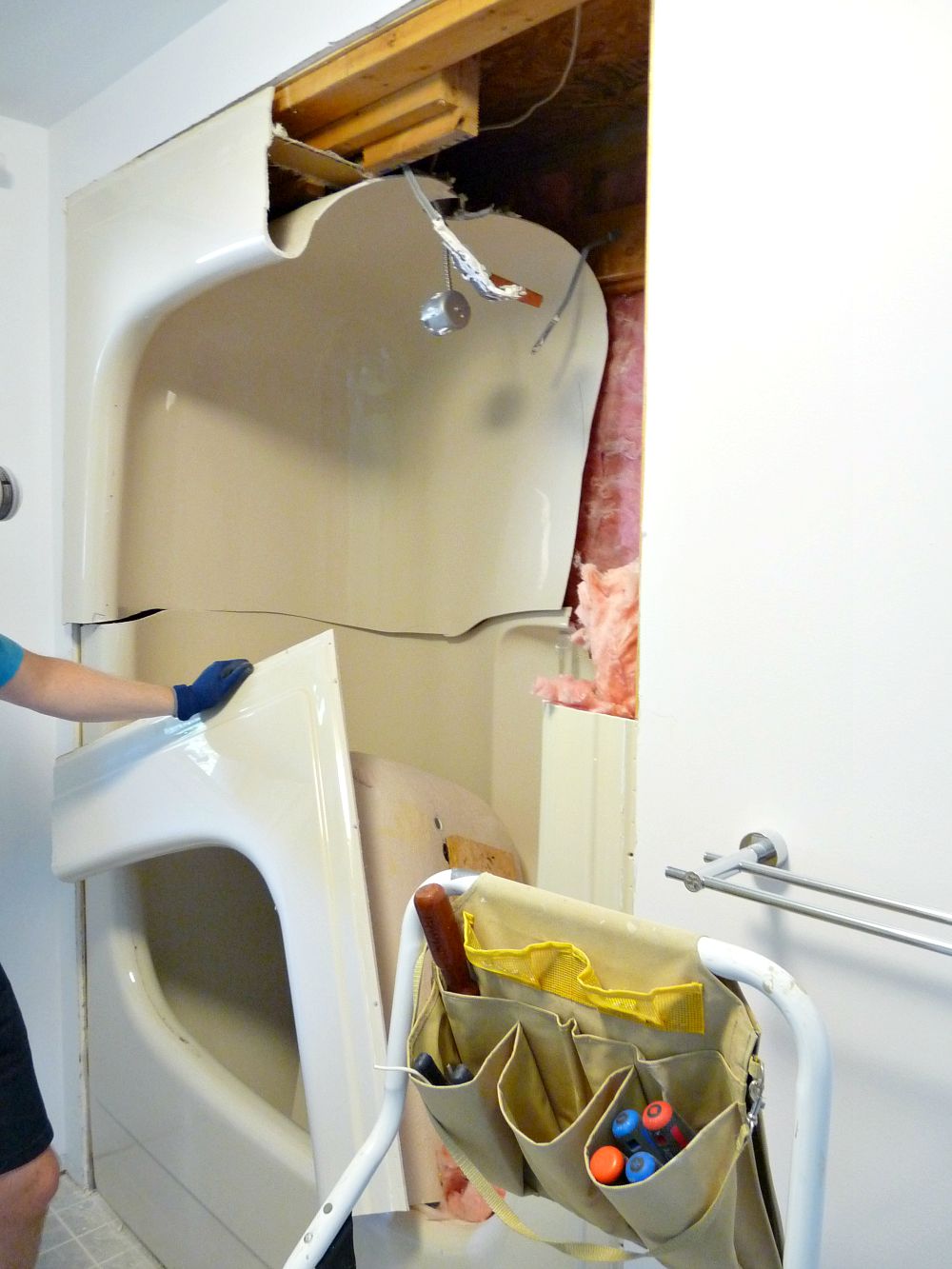 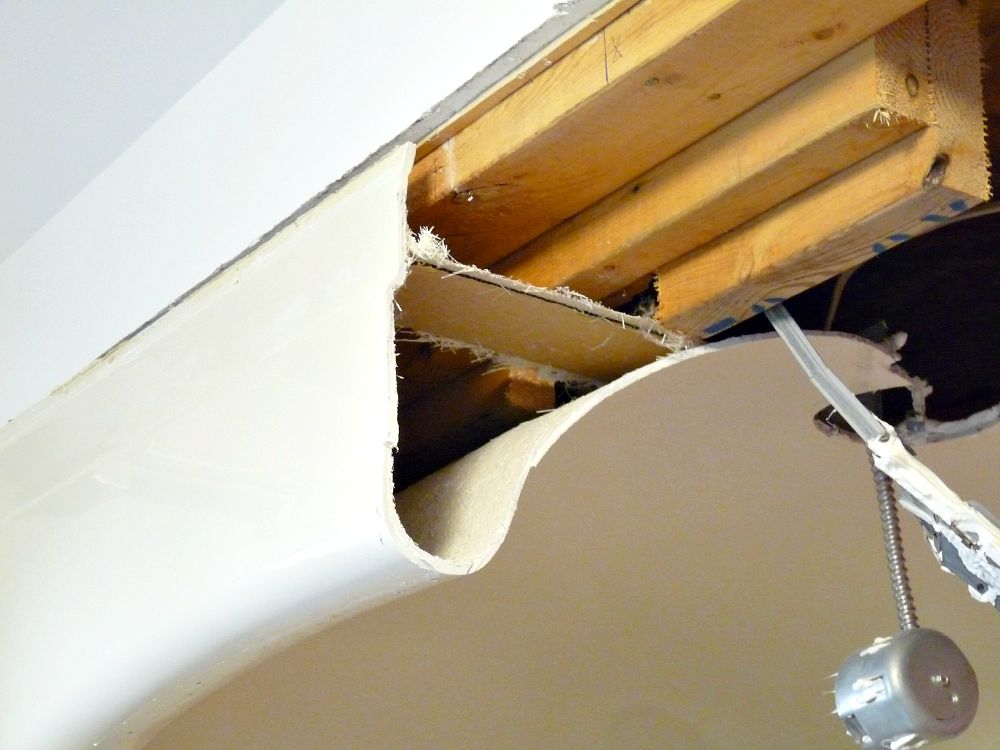 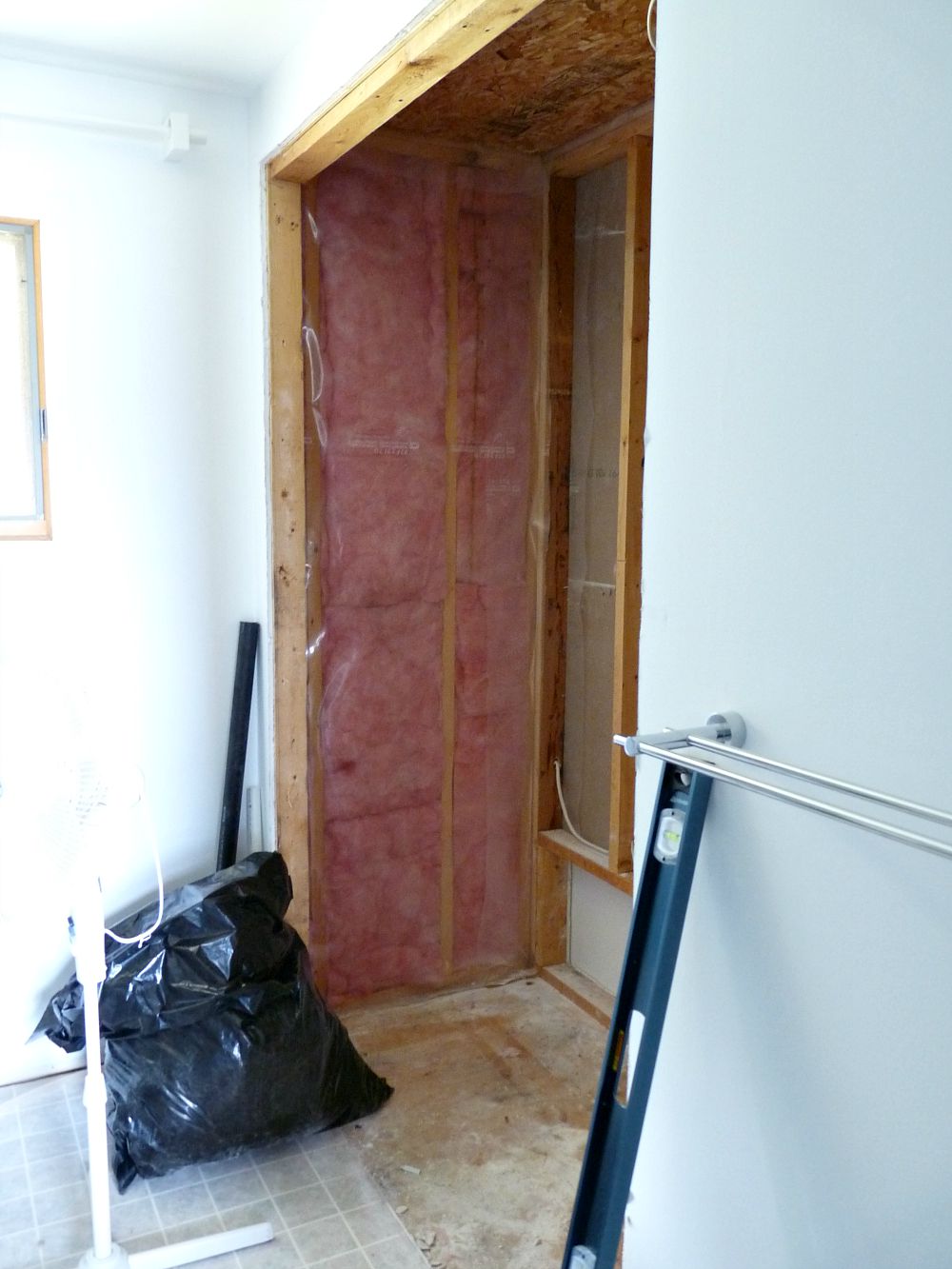 At this point it seemed our luck had turned, because the guesthouse shower – which boasted ice cold water in the spring when we tested to make sure it worked – actually ran hot water!  Hot water!  I hopped in for the inaugural shower and, as expected, it was ice cold.  I shivered my way through a quick shower and was just about to leap out when the water started to get warmer, and warmer and, all of a sudden, was piping hot.

Then we hit more delays, as it goes with renovations.  Three damaged bathtubs (that’s a story for another day) – and more than a month later – we finally secured a tub in perfect condition.   Meanwhile, we had to keep calling our tiler and cabinet installer and delaying installation, again and again.

While we waited, we kept chugging along and installed the new fan (we previously only had a light in the shower). 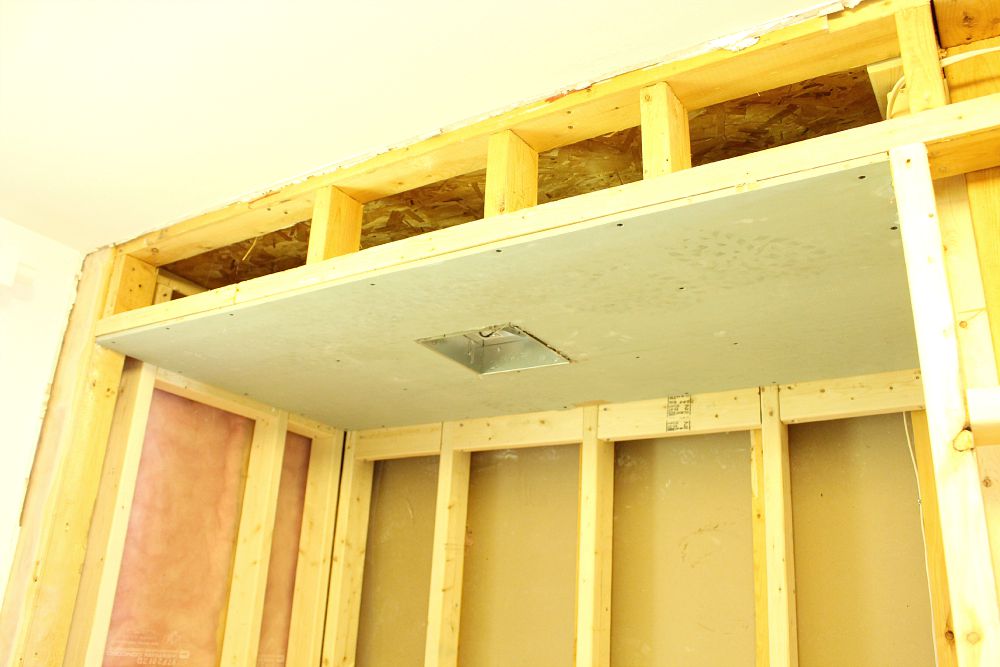 As the pace slowed, we found ourselves with some time on our hands, so naturally I added projects to our to-do list!  Hubby had been reluctant to remove all of the drywall, but I just didn’t think the old and new would match up well so I convinced him we should take down and replace the drywall on the window wall too.  Doing this allowed us to remove the old toilet paper roll holder that was bolted  in place, so I’m excited to replace that with something nicer (which wasn’t part of the original plan). 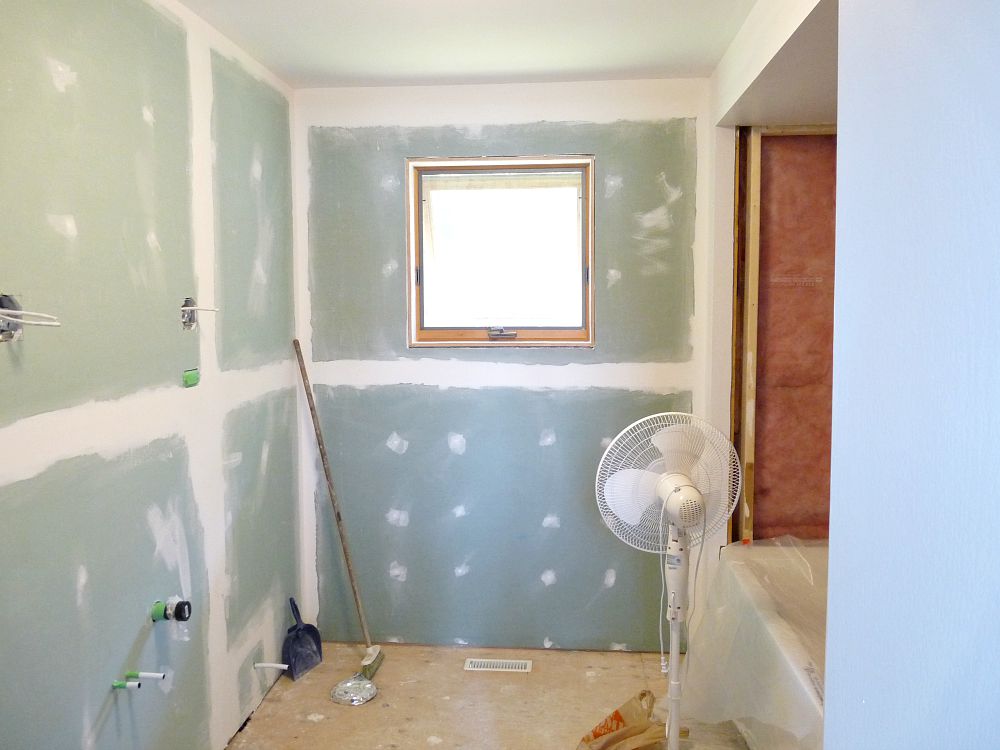 We also removed the wall to the right of the tub so we can install a towel warmer!!!  That will be amazing in the winter – I’m so happy we went ahead with that, which is also a little bonus project.  We toyed with the idea, but hadn’t committed until we found ourselves with a little extra time.

When we finally got a tub that wasn’t damaged, we installed it and hurried to get the plumbing done.  The plumbing had been off centre to accommodate the shower portal and we wanted to rearrange a bit anyway.  Hubby had to do some framing because the nook for the old shower portal was much larger than we needed.  It took quite a bit of time to get this tub area ready, but now it’s in and ready to go! 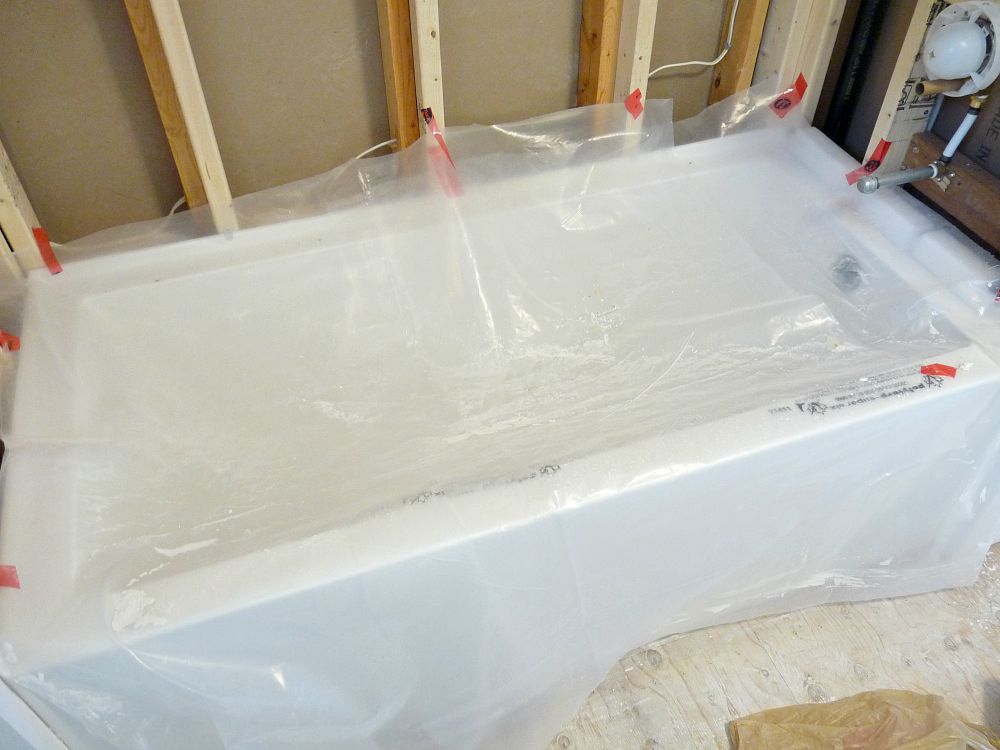 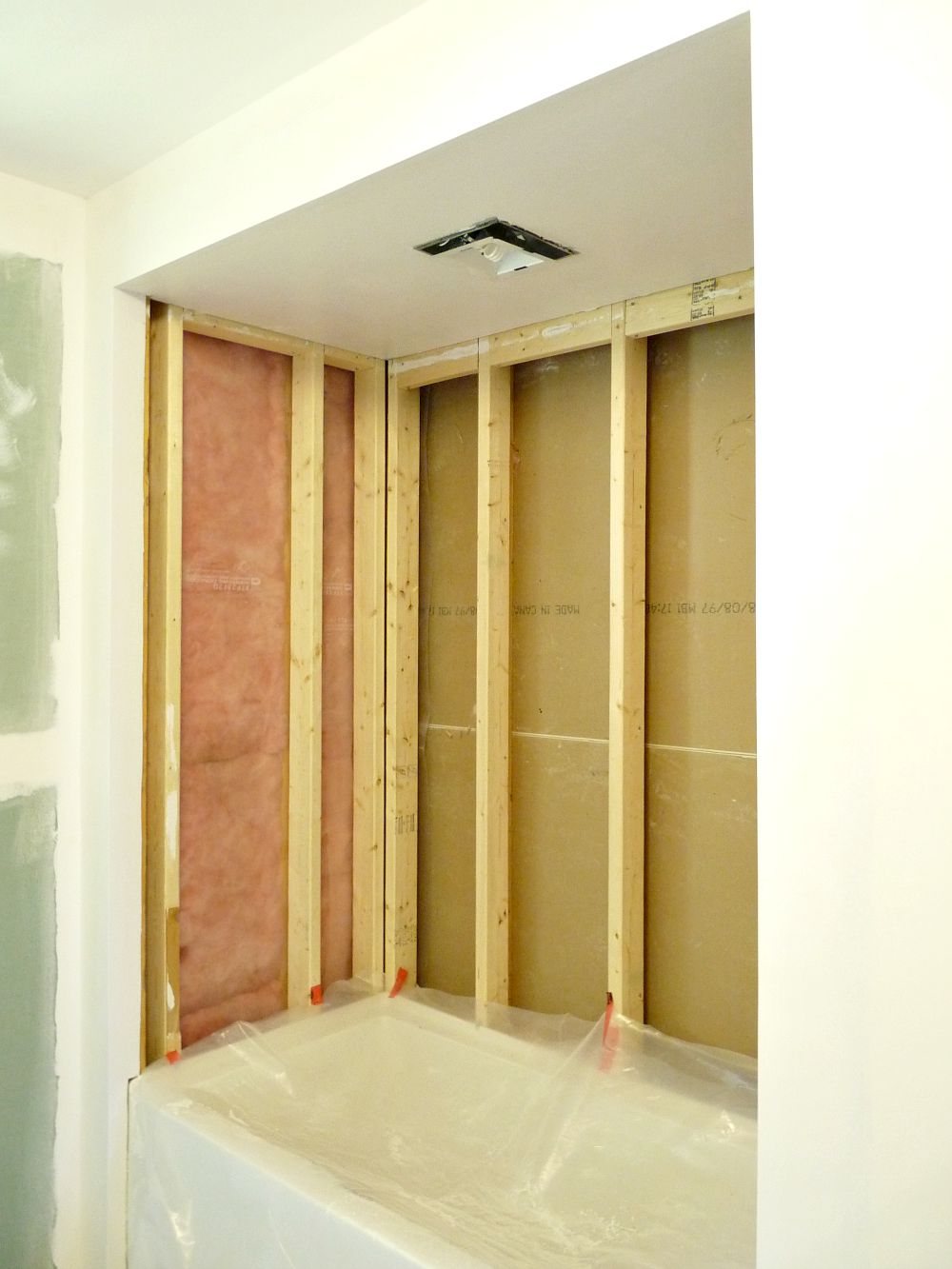 But don’t get excited about the walls – we’re re-painting them the exact same shade of white!  I contemplated a soft aqua ceiling, but I think I should wait on any colourful plans until I see how bold the aqua sinks are once they’re installed. 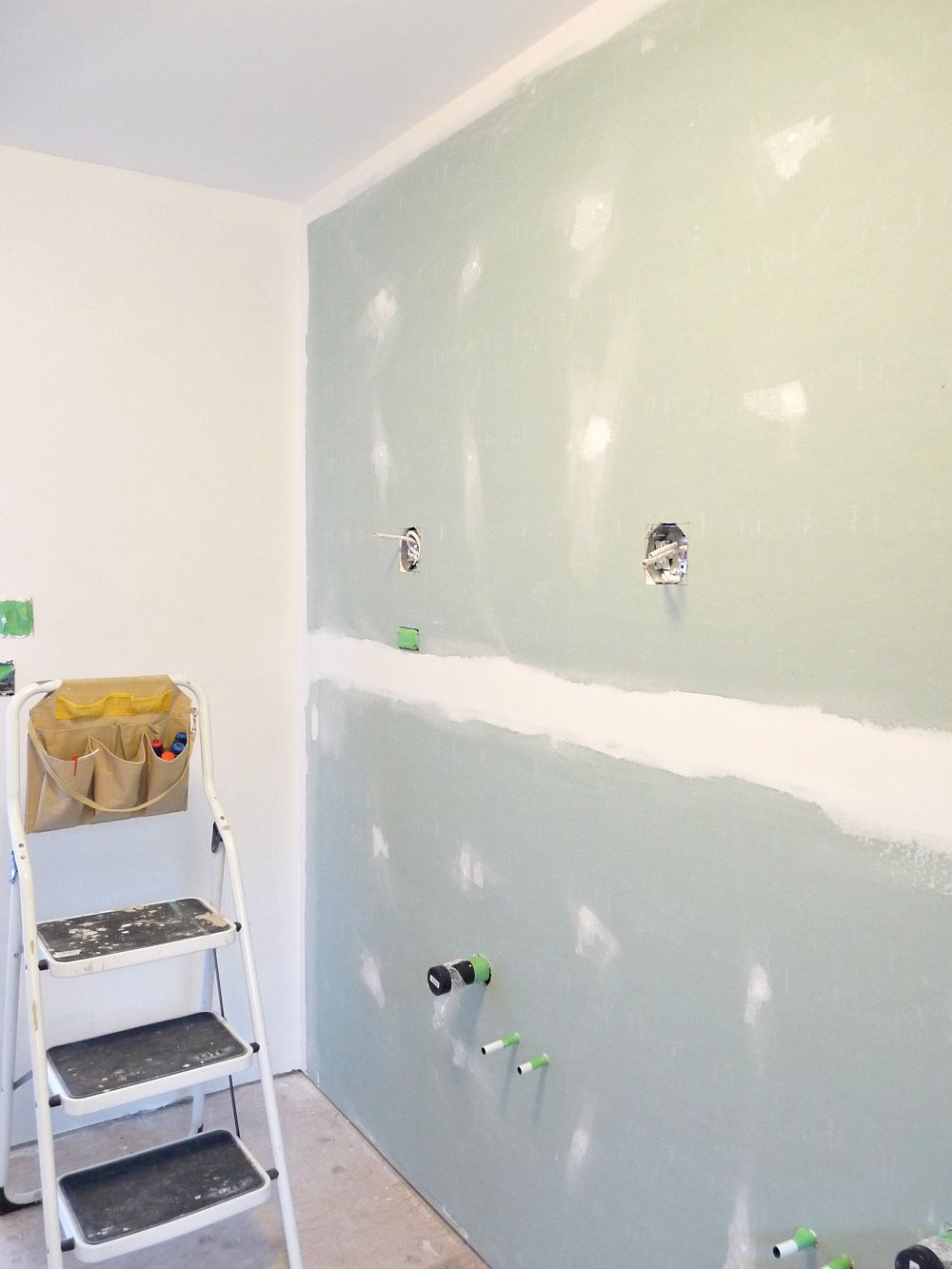 We can see the light at the end of the tunnel because we’re no longer ripping things out – we’re starting to put the pieces back together.  Getting the tub installed was a major turning point and it really motivated us.  But I have to complain a little because seeing that tub is terribly tempting.  Of course, we’re still showering in the freezing cold guesthouse (the water is hot, but the building is not).  Every day I apprehensively check the weather.  The water lines out there aren’t insulated and so every fall we drain the lines.  If we get an early frost or freezing temperatures, we might have to endure ice cold showers – or no water at all.  Like totally dummies, we shower at night because I just can’t sleep without an evening shower or bath.  Even with this situation, I couldn’t switch to morning showers.  Let me tell you, running back from the guesthouse in pajamas, raincoat, (toque on some cooler nights) and rubber boots, in the pitch black, is getting old.  Some nights we’ve gone out there to shower and emerged in the middle of a crazy thunder shower.  Other nights we hear rustling in the woods behind the guest house and bolt back to the house as if our pants were on fire.  Sometimes we cross paths with a fox and for some reason we’ve really rubbed him the wrong way because he absconded with one of my shoes from the carport on the weekend.  But sometimes we get our act together and go for a shower when it’s light out and wander down to the lake, enjoying a sunset after our shower, which is kind of dreamy on warm nights. 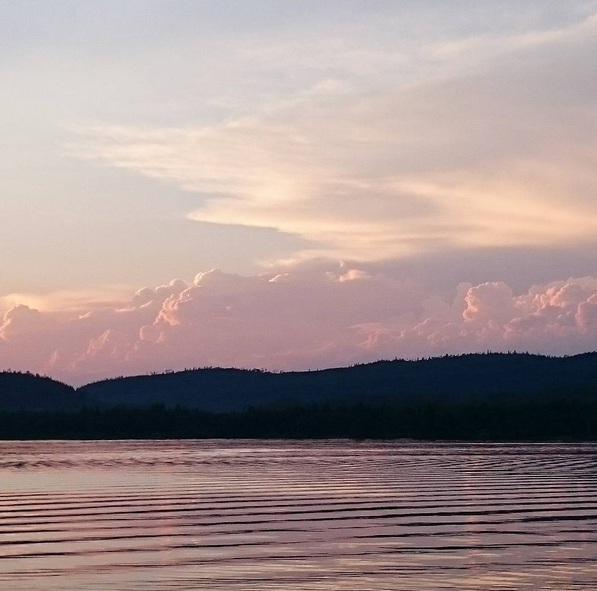 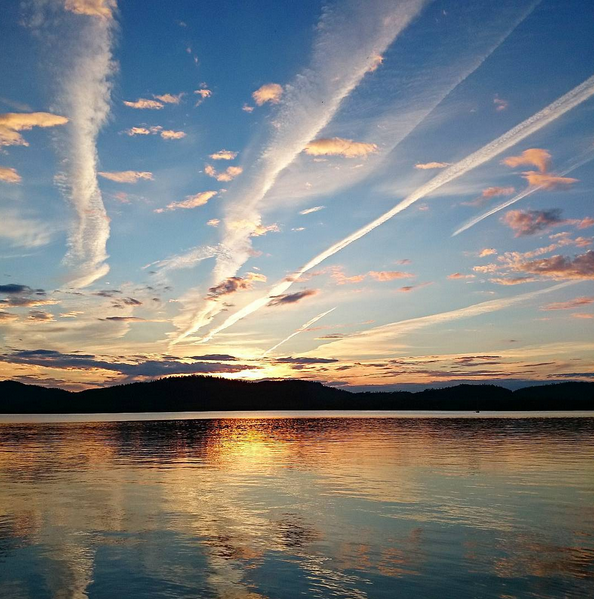 So I really shouldn’t complain – it’s such a perk that we even have a second shower.  Our only other option would be a quick hose down in the driveway.

Now that things are progressing again (hope I didn’t jinx it!), I’ll be sharing little updates on Instagram (#lakehousereno).