The tile is done in the bathroom and even thought it’s not a DIY project, I snapped some progress photos so anyone thinking of renovating can see the process for tiling a bathroom and know what to expect – plus I’m sharing what I like, what I hate, and what went wrong… 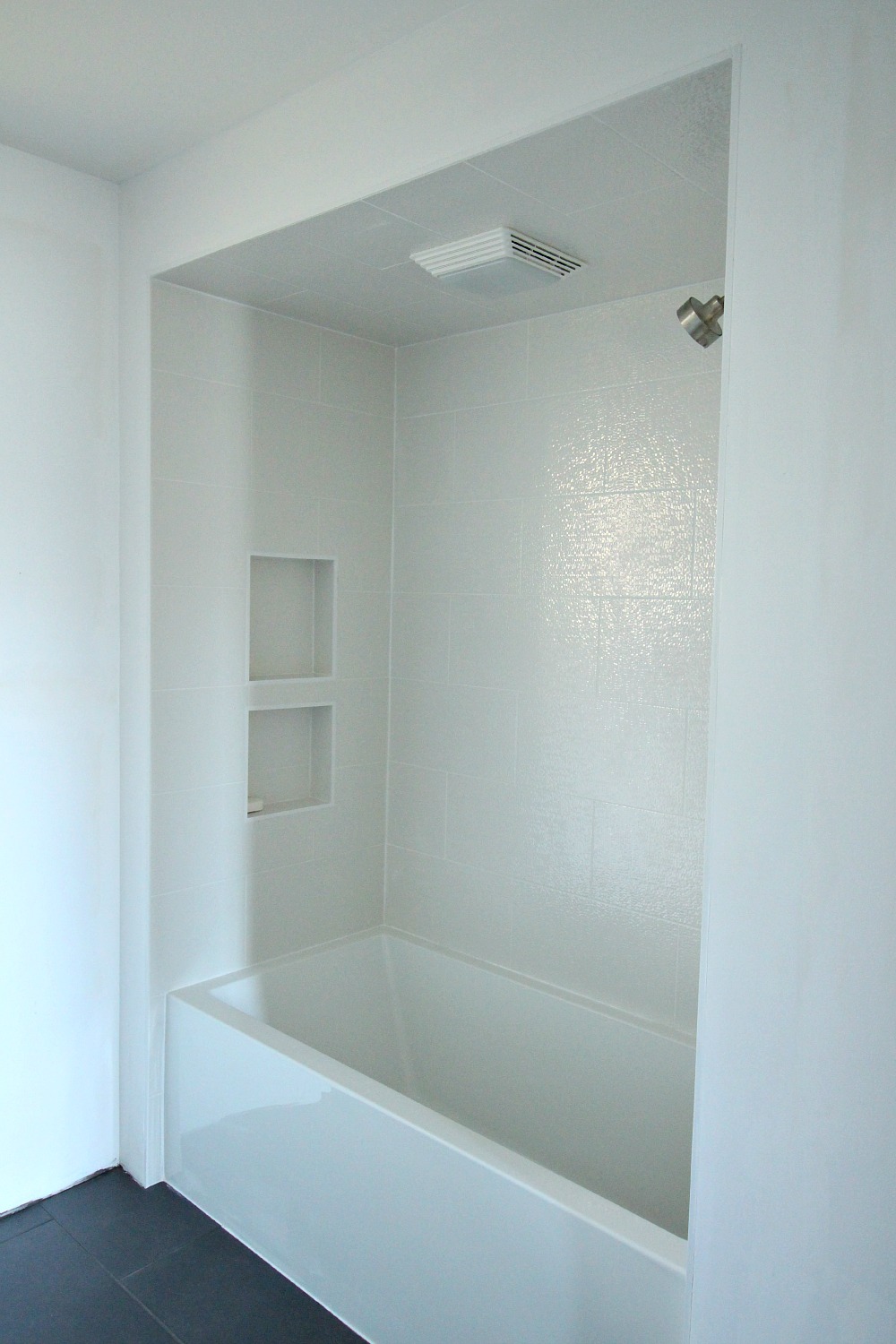 Before we get into tiling a bathroom, let me vent a little because I’m really peeved at the owner of the tile shop we hired to tile the tub surround and floor.  A bunch of careless mistakes were made, plus he gave us incorrect instructions for prepping the space.  I’ll flesh out all of the problems another day because there are definitely lessons to be learned from my experience.  Right now I’m too crabby because when I washed out the tub and started to wash off the hazing from the tile, I noticed the worst thing: not only did the he gouge our brand new, perfect acrylic tub, he shoved some grout in there to hide the damage and didn’t utter a peep about the damage to us.  Can you believe the dishonesty?!? 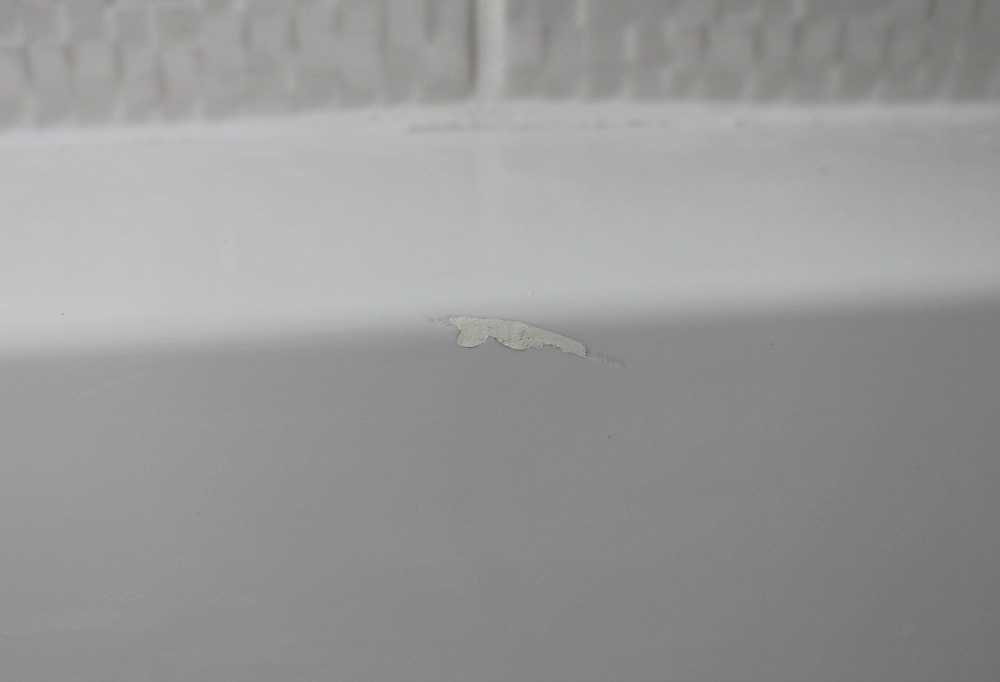 This really bugs me because this tub was not easy to acquire.  After getting two damaged tubs delivered, we finally drove 3 hours to Duluth, MN to pick up a tub in person and drove it the 3 hours home.  When we got it home, we saw its flange was busted so the next day we drove back to the States for another 6 hour round trip and got a new tub – but not before we spent an hour inspecting every inch of it with four anxious salespeople.  We inspected it again when we got it home, and once again when we installed it because we wanted to be certain it was absolutely perfect.  Mid-way through the tiling, I cleaned the drop cloths and cardboard I had provided for the tilers to cover the tub (they showed up with nothing so I had to scramble to find them something).  I also cleaned out the tub, worried they’d grind in chunks of mortar with their boots, and inspected it again then – still no damage. Whew.

In the final two days of the project, the owner showed up to finish up the job and that’s when the damage happened.  Instead of fessing up, he and/or his employee tried to hide the damage and then they scooted out of here like their pants were on fire.  Not sure what I’m going to do (and he’s certainly not returning my calls).  While I sort it out, here’s a look at what’s involved for tiling a bathroom and what my tile choices look like installed.

Day One: Prep, Some Tiling & I LOVE the New Shower Cubby!

After day one, about half of the tub surround was tiled – the prep work had eaten up much of the day.  Tiling a bathroom is not a quick job!  I’m thrilled about the shower cubby – we definitely longed for a cubby in the townhouse.  We chose the Schluter KERDI-BOARD shower niche with shelf and I highly recommend it because it offers great storage and the Schluter products are top notch for being fully waterproof. 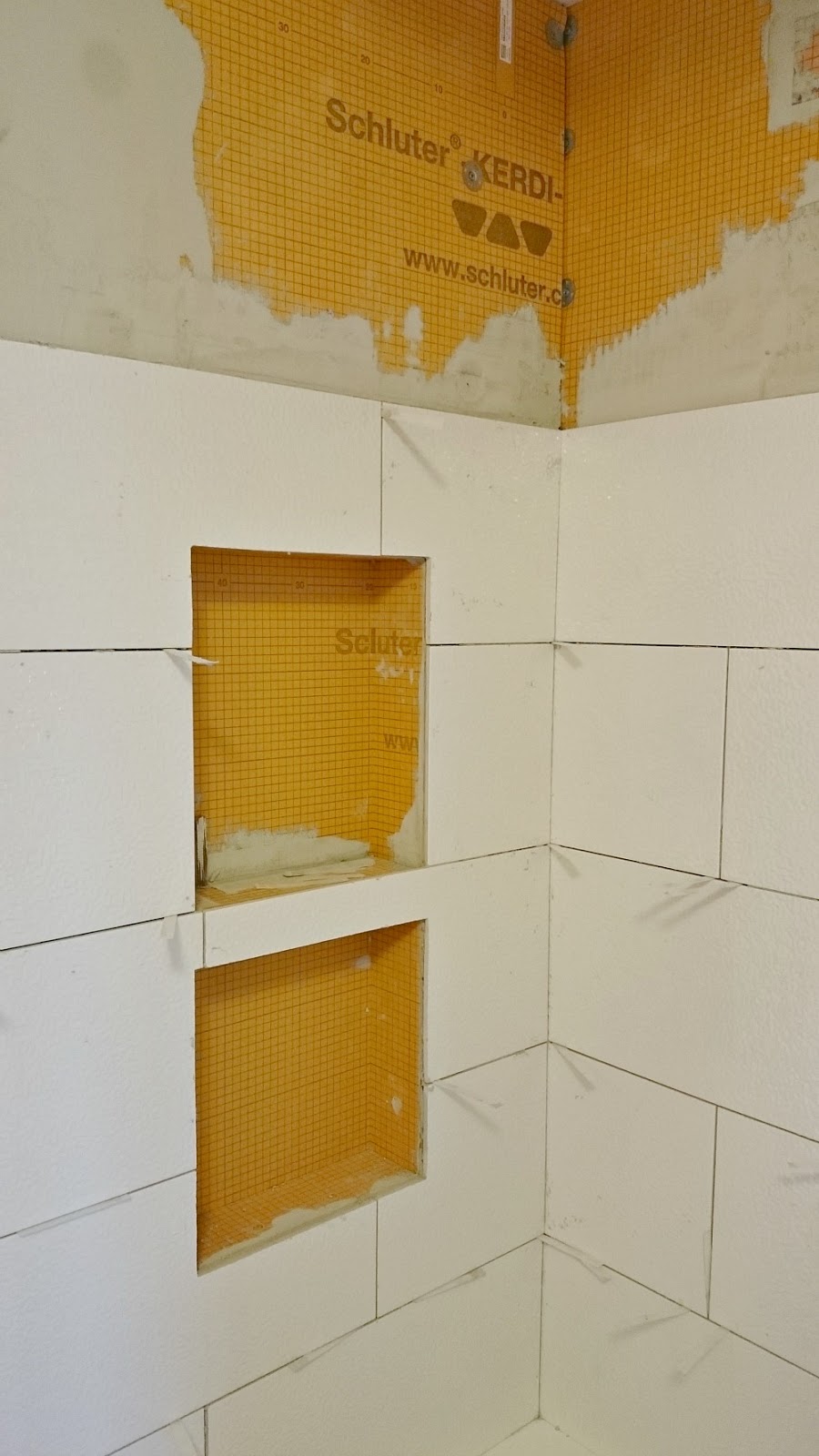 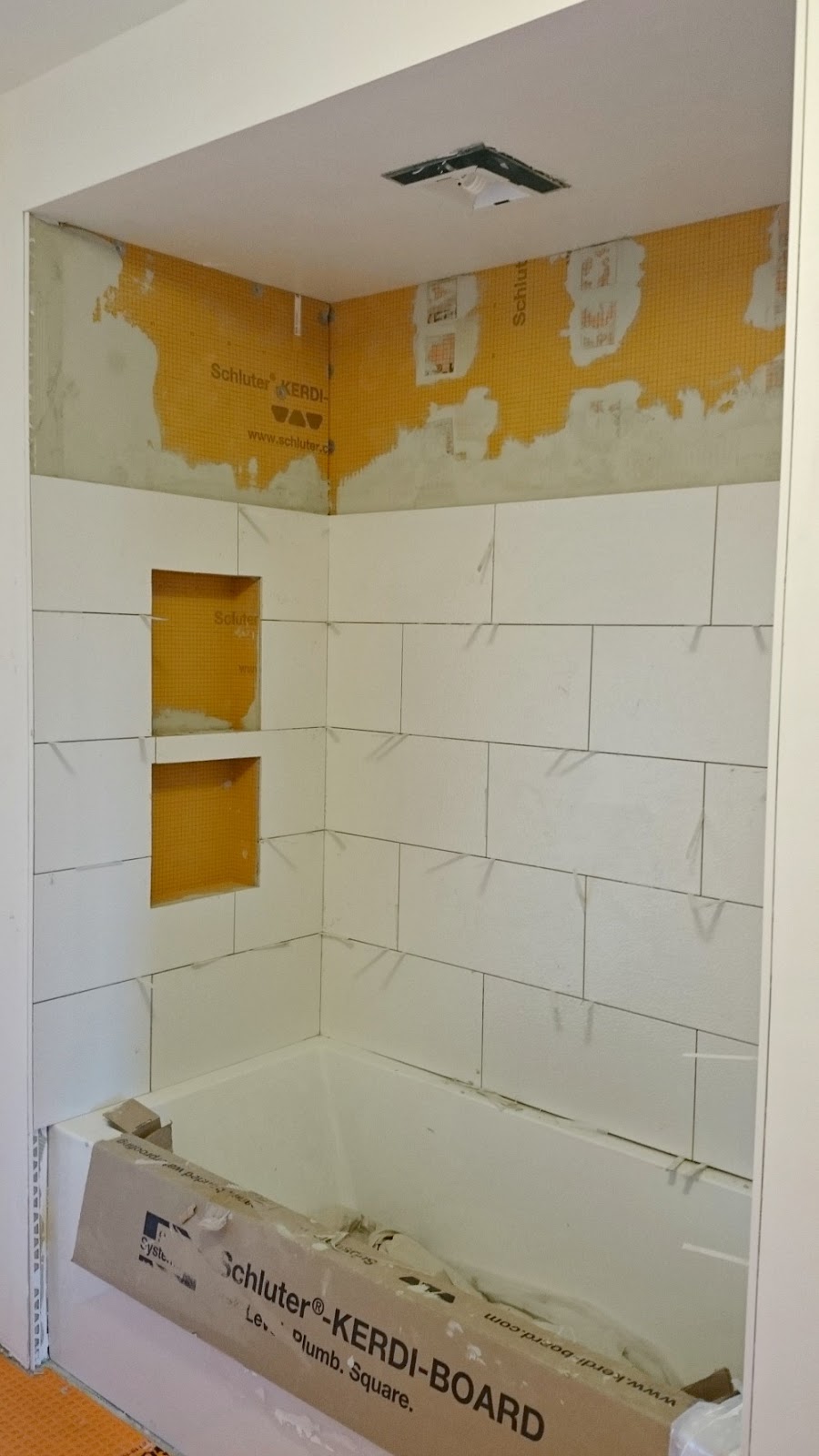 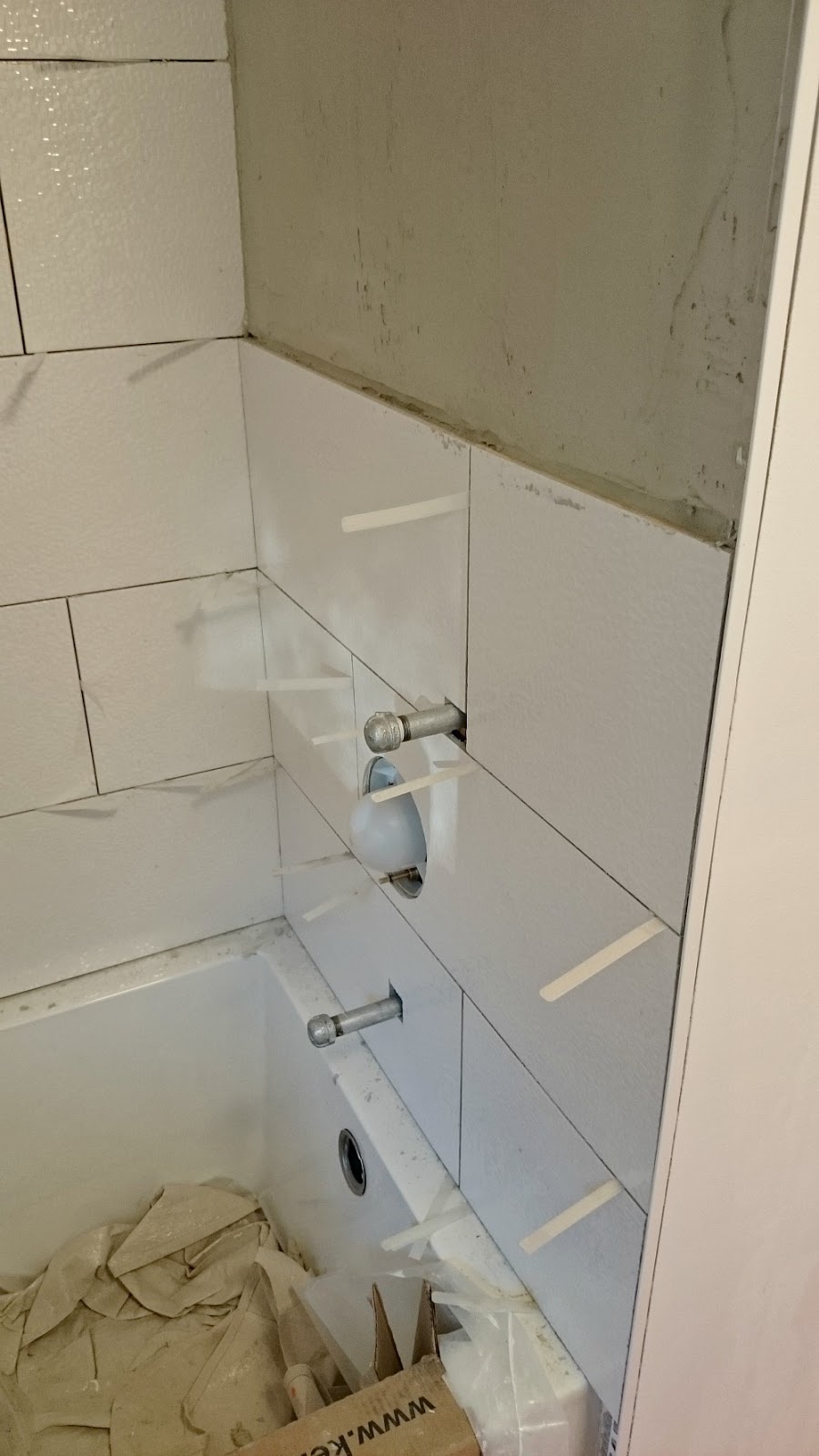 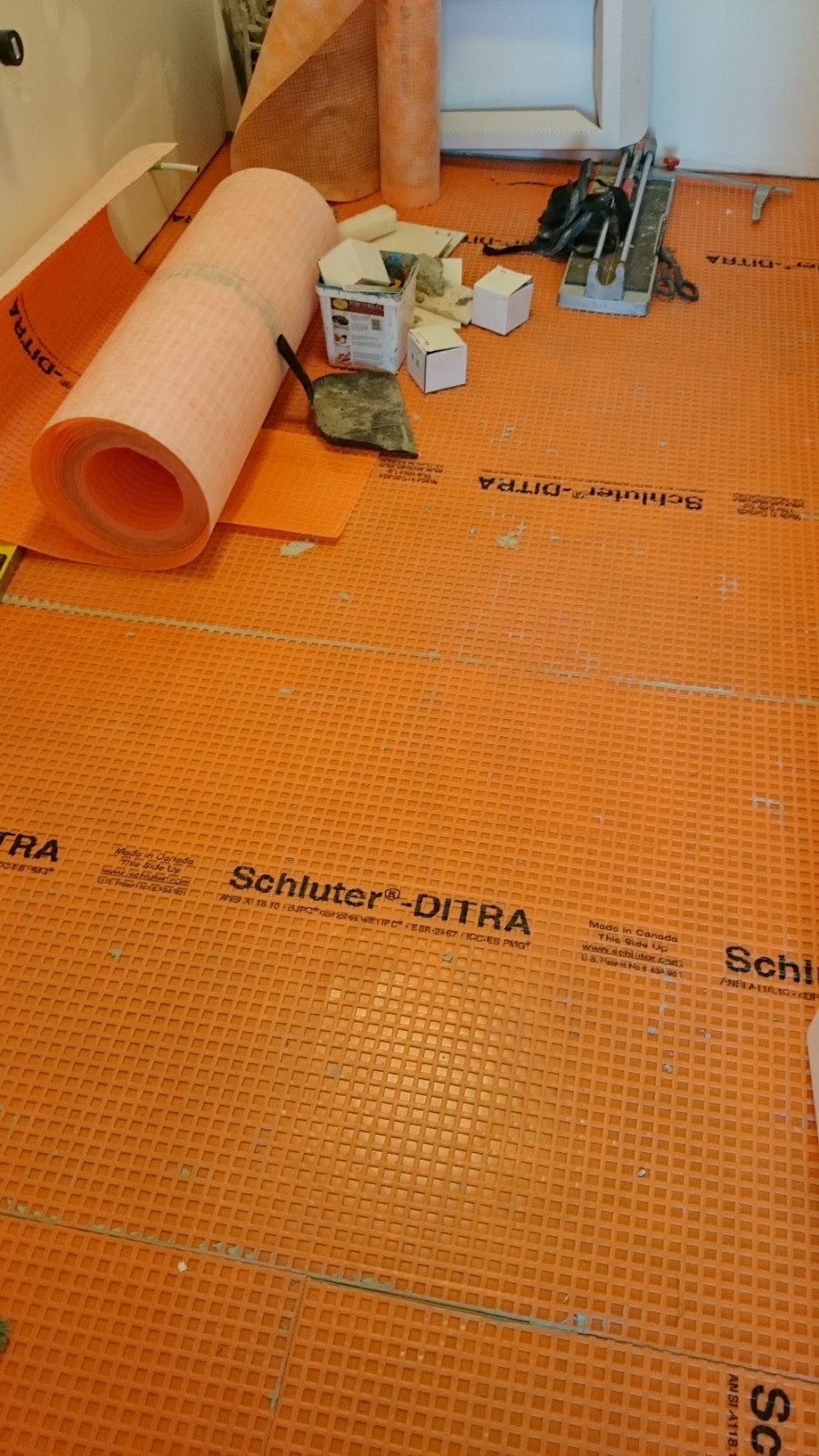 Day Two Involved a Trip to the ER!

Day two was a stressful day and probably not the norm for what to expect tiling a bathroom!   One of the tilers sliced into his arm with a chop saw and because he was working here alone, I grabbed a towel to put pressure on the cut and quickly drove him and his truck to the hospital (which is about an hour away).  I was worried that he might feel faint or pass out on the road.  Then I was stuck in town, so my Dad drove me home and had to turn around and drive the hour back into town.  He was not happy.

The next day, the tiler showed up to try to finish the job on day three.  Seriously – even with a big gash!  I was thankful he came back to work because he is a fabulous tile setter.  He was so careful about the tile placement and making sure that the pattern looked good.  He worked tirelessly to avoid any tiny, unsightly strips of tile and he double checked every decision with me – he’s the one who even thought to cover the tub!  Unfortunately, his last day with the company fell on day three of the job, so he couldn’t finish the work. 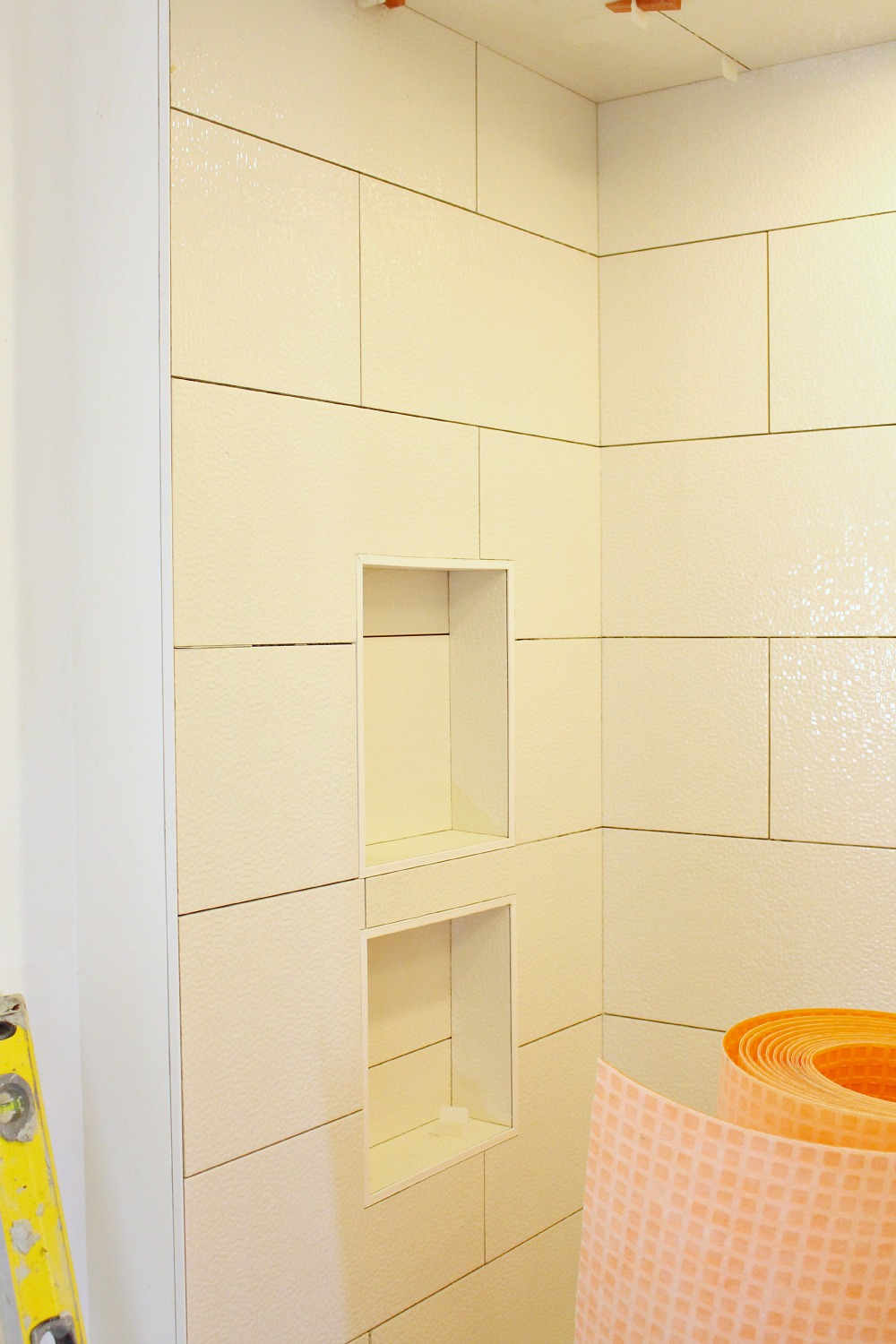 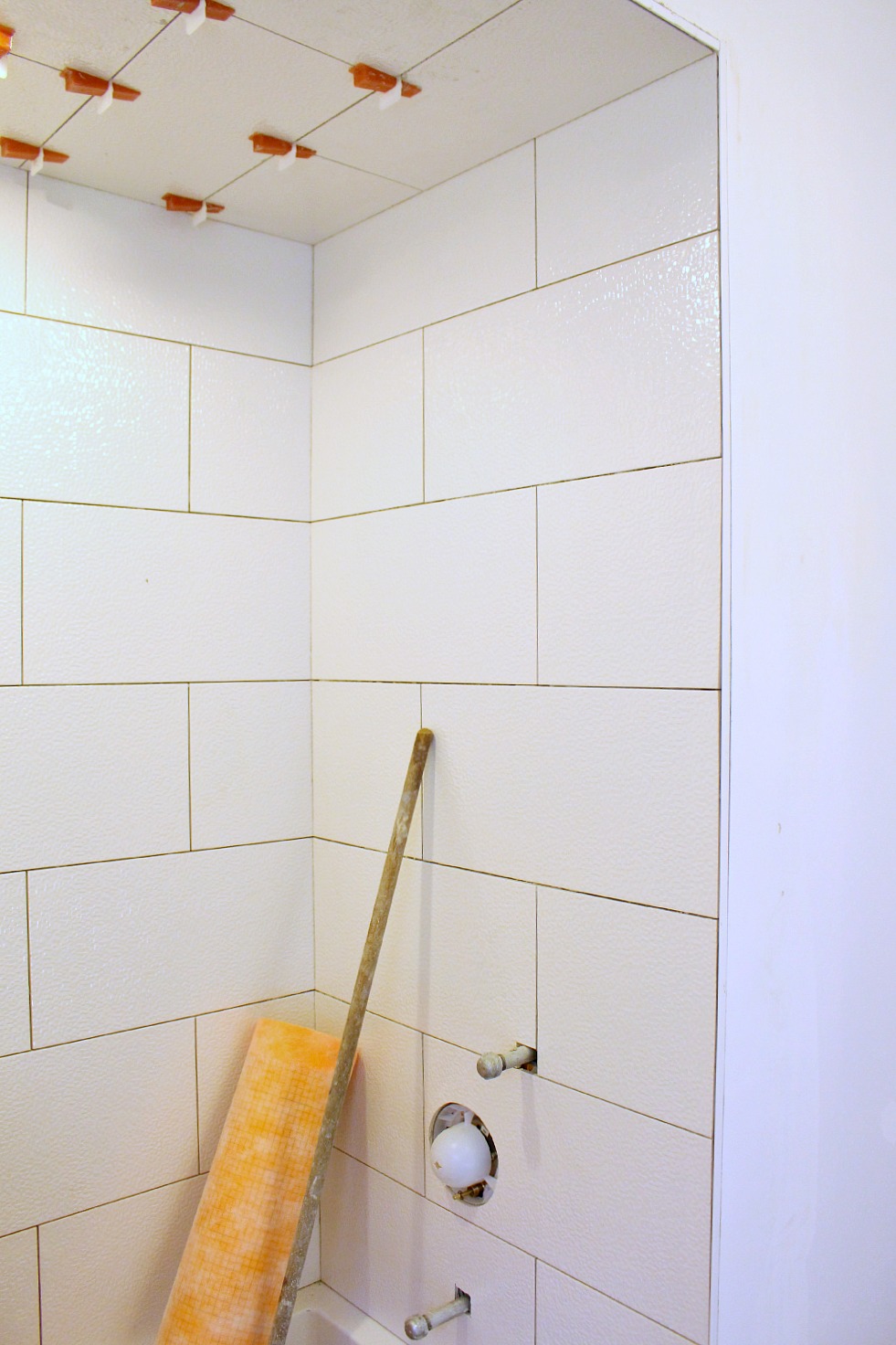 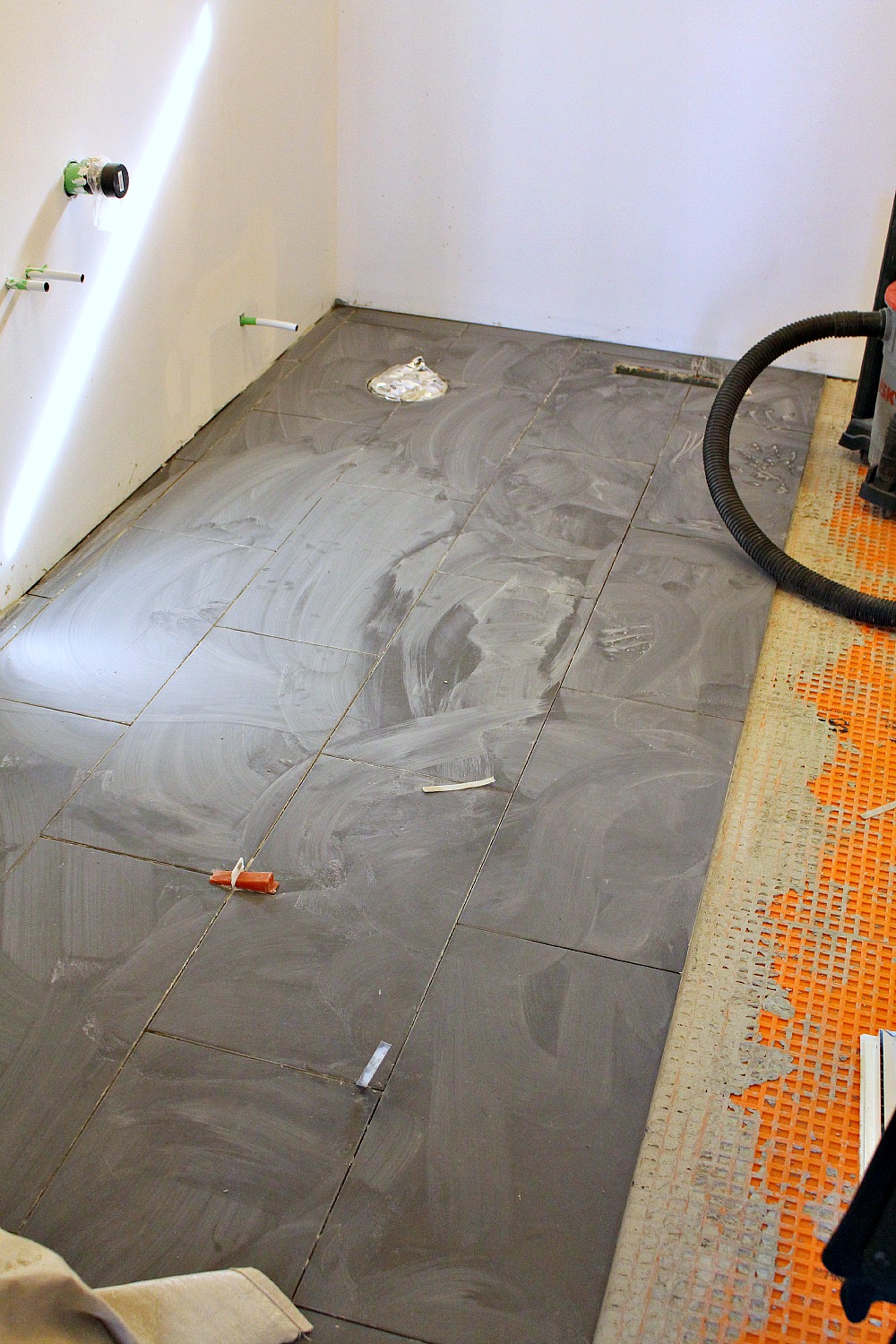 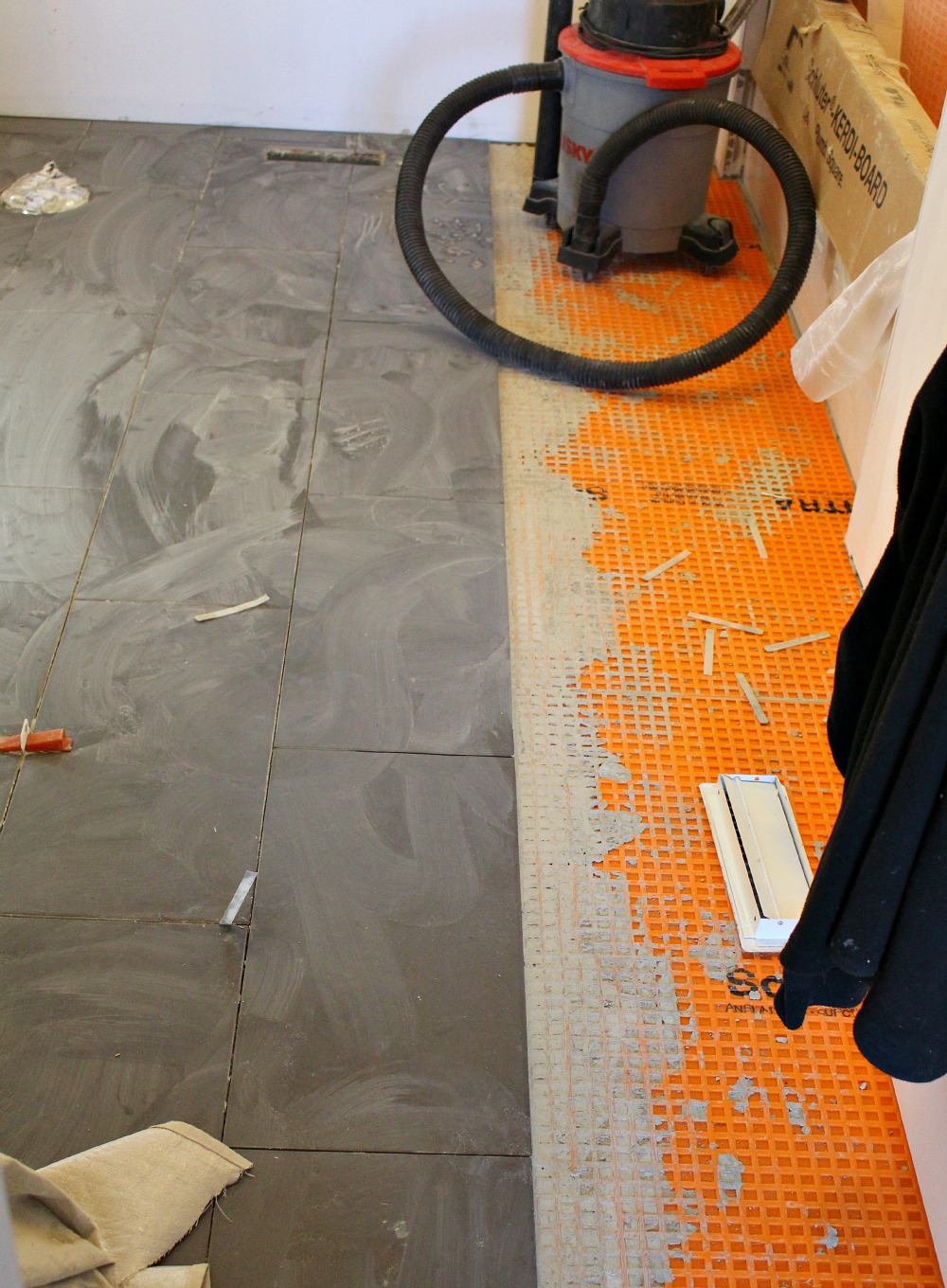 I always wondered how ceilings were tiled, what with gravity and all… 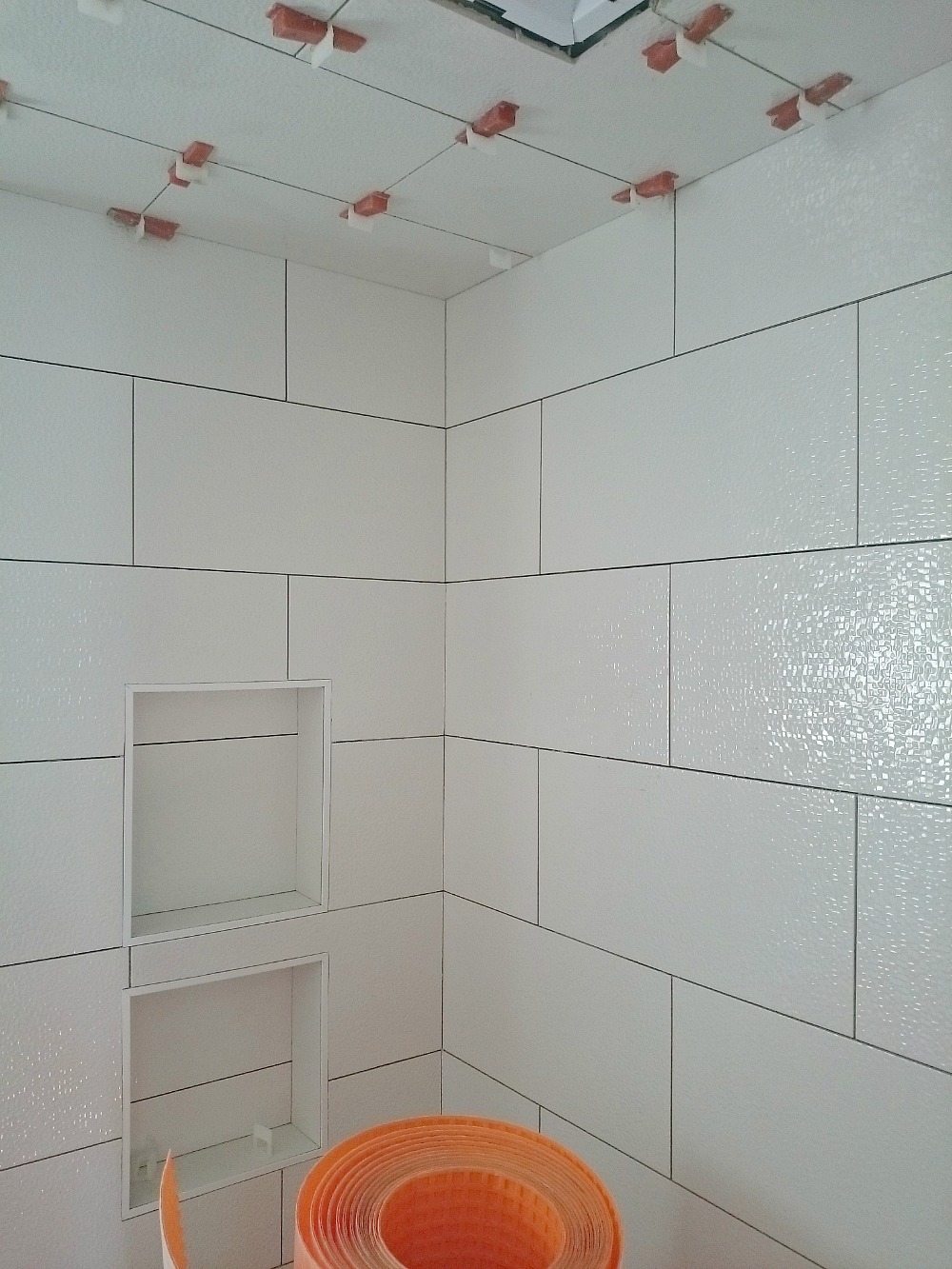 If I’m being honest, early on in the installation I had some doubts about my tile choice for the tub surround.  It was reading really beige and dull, especially when the naked florescent bulb in the shower was turned on, or the light was really dim. 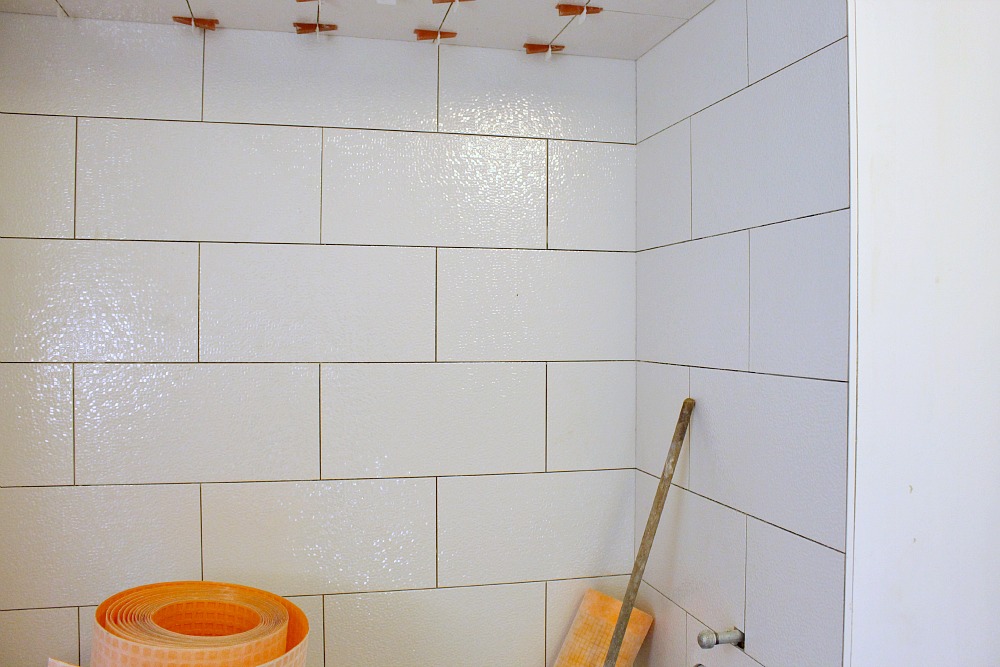 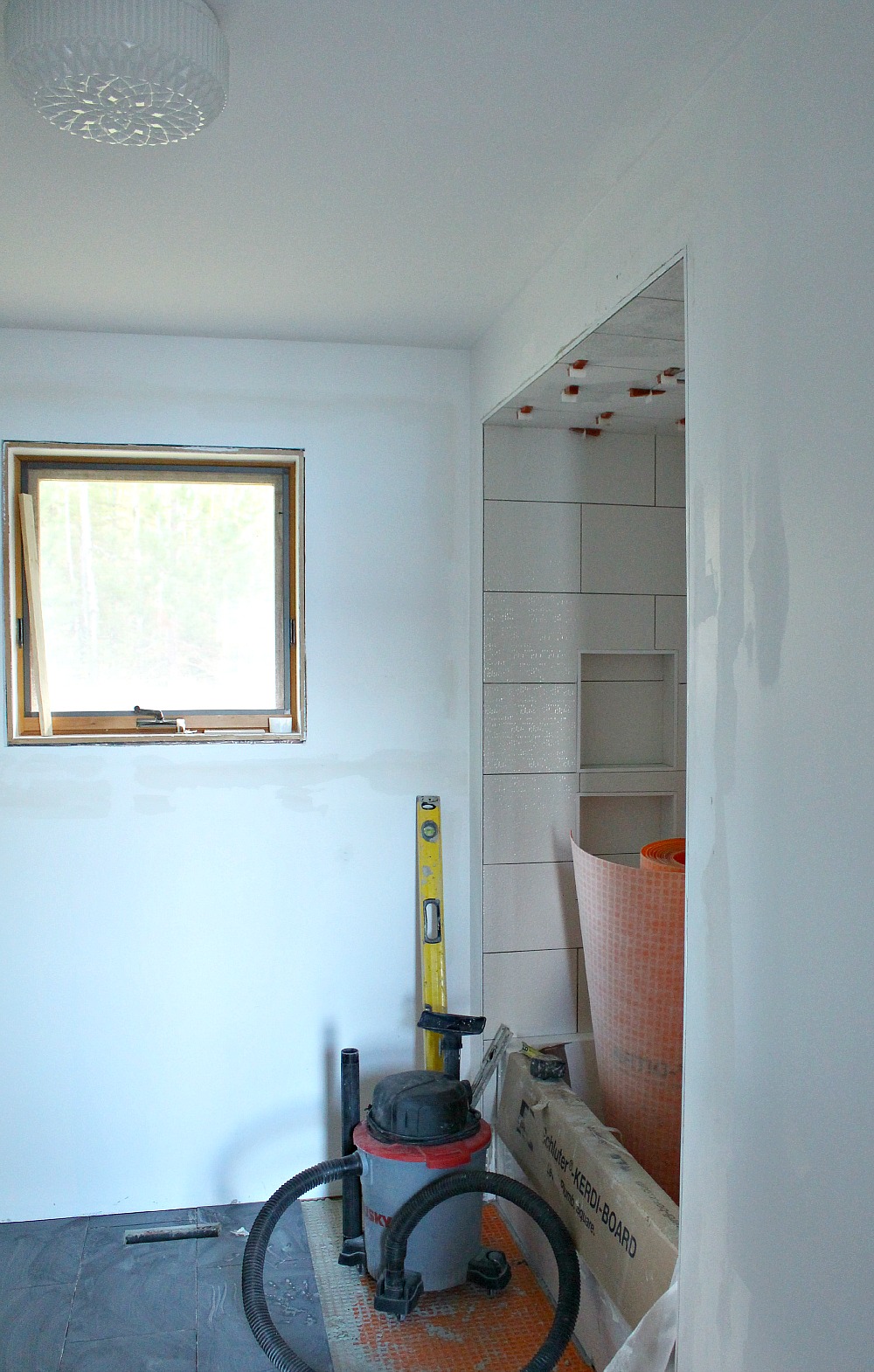 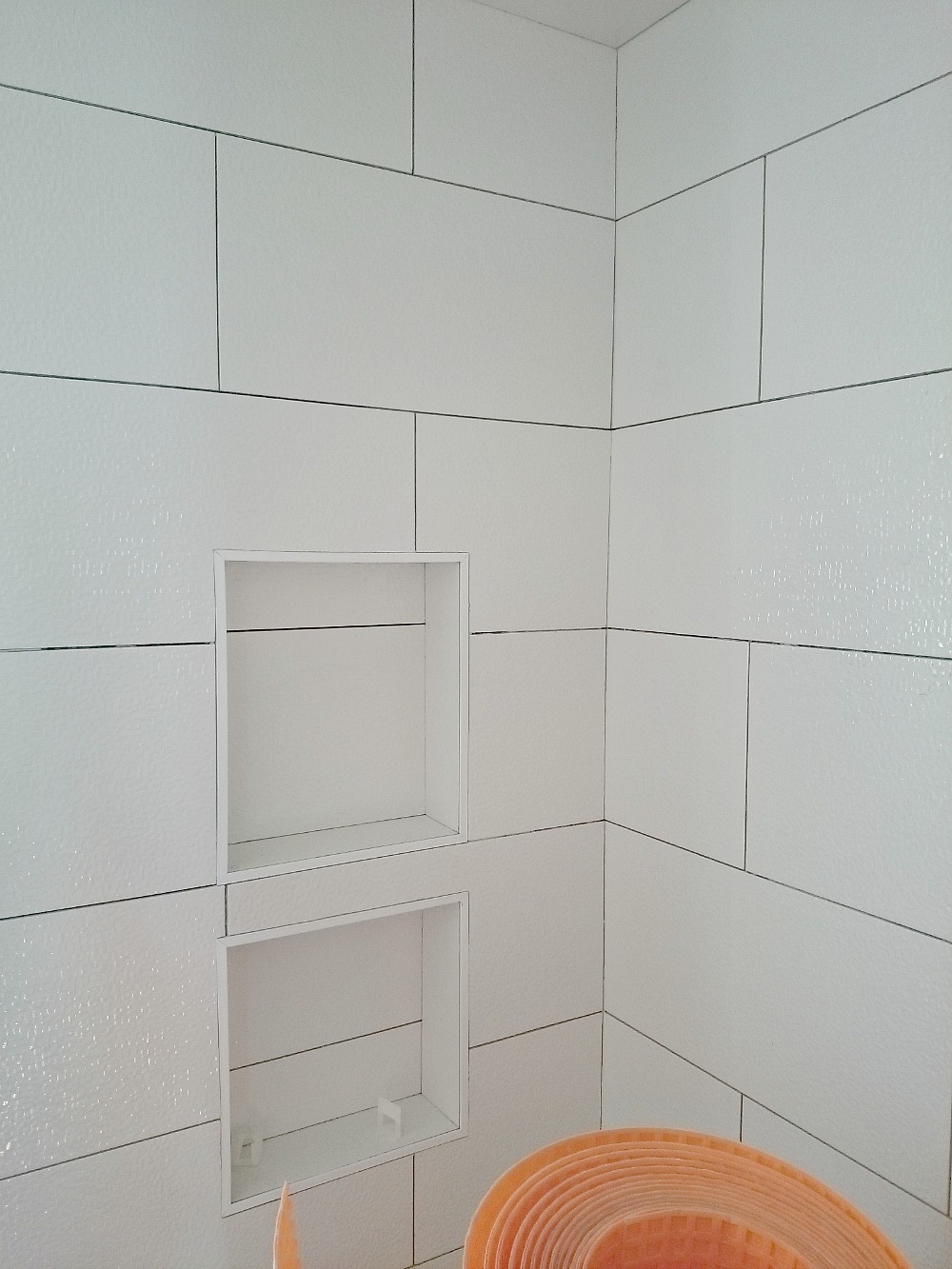 It turns out it was reflecting some of the orange Ditra left in the tub – which I realized when I stood in front in a bright aqua sweater and the tile looked turquoise!  Now that the bathroom is devoid of junk and everything is grouted it looks like what I envisioned.  I love how it catches the light and just gleams!  Here’s a look at the bathtub and surround now: 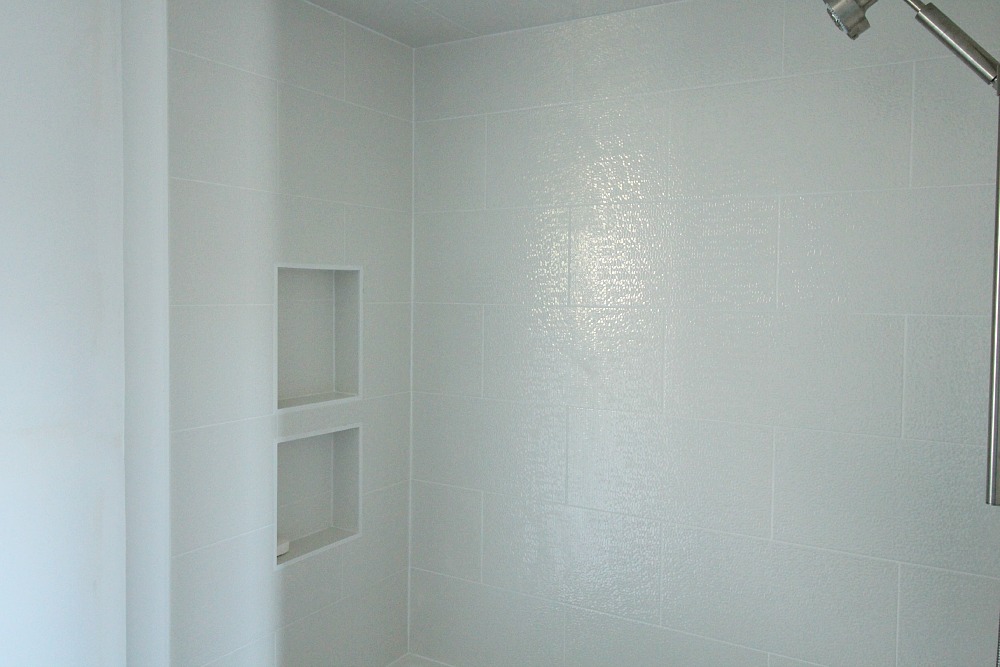 As hoped, the tile has an organic quality, with a nod to mid-century modern mosaic tile – which is what drew me to it.  I still ogle turquoise tile, but this is subtle enough that down the road I could update and refresh this space easily with some accessories and artwork.  Plus – so little grout!!  Even the tilers admitted that the fewer grout lines the better.  We might be in this house for the long haul (which is why the damaged bathtub bothers me so much), so I wanted the most expensive elements to be neutral – but not boring – and we didn’t want to have to be tiling a bathroom again, anytime soon!  I think this tile fits the bill.

Plus it makes an excellent post-it note, apparently: 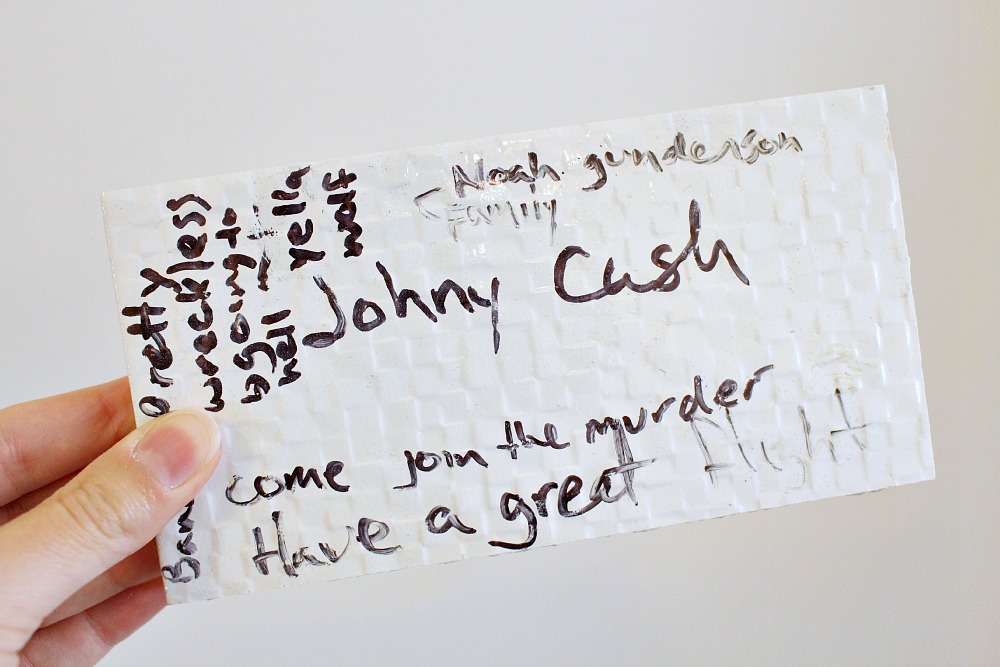 Days four and five (both half days) of tiling the bathroom consisted of the owner and one employee replacing a flawed tile I pointed out (but not the chipped one I also requested be replaced), finishing up tiling the last few rows of floor tile, and then caulking/grouting everything.  That’s when the damage to the tub happened.  But let’s not belabor that and let’s enjoy the tile instead!

The floor is very simple and I’m so happy that I went with a matching charcoal grey grout because it just makes it look so modern.  There are a few small chips on the floor tile too (argh!) and it’s still looking a little washed out and dull because it needs a few more washes before all of the hazing is removed.  I’m hoping the grout just has some dust in it because right now it looks a little uneven.  Le sigh.  But I love the size and colour – it ties in nicely with the fireplace and it will look amazing with the walnut cabinetry. 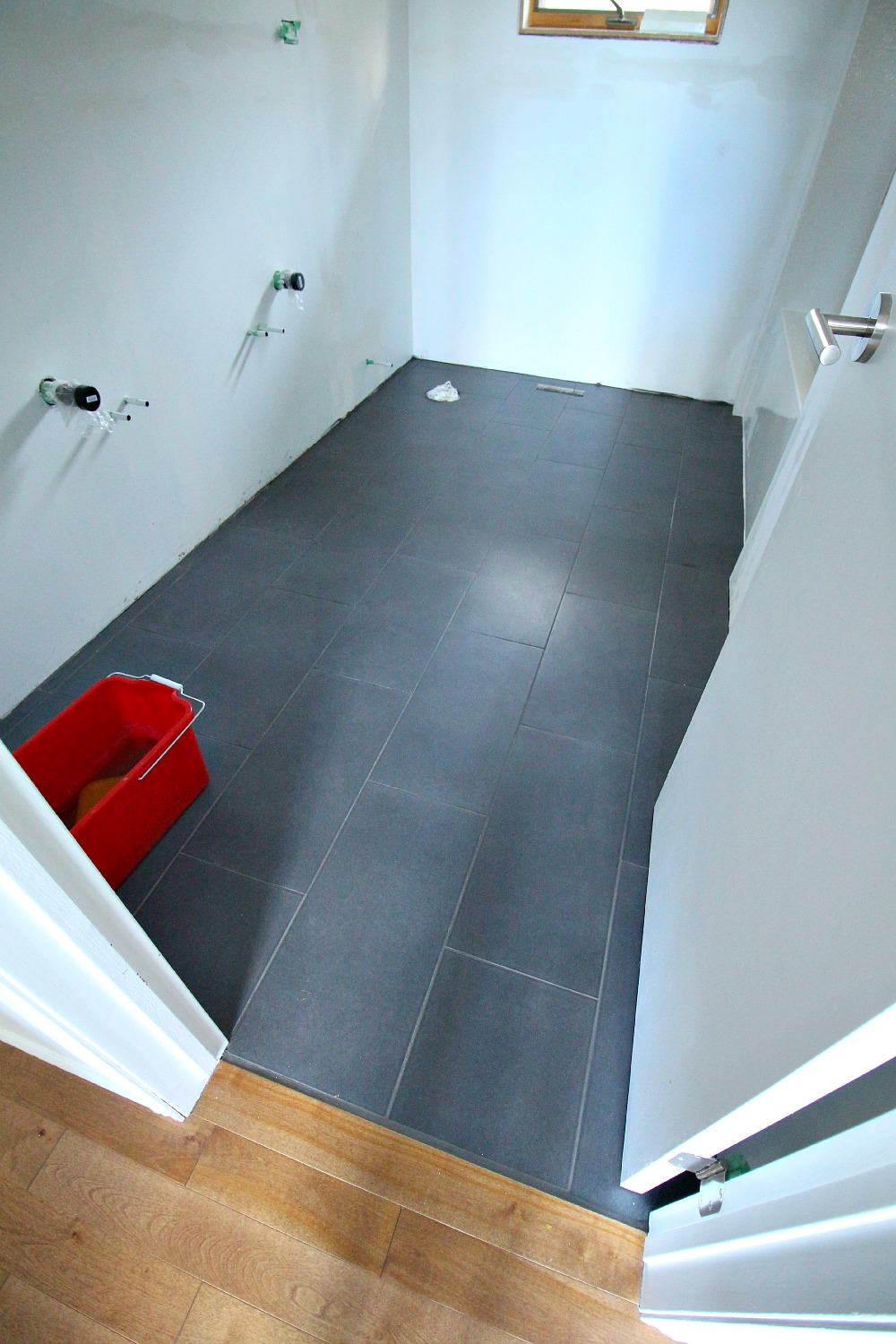 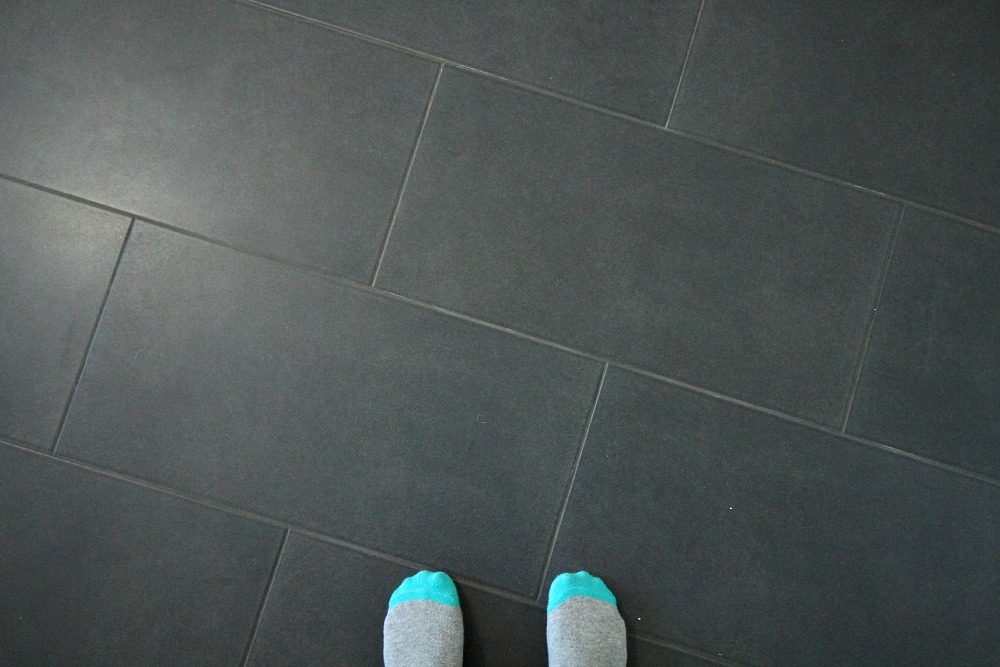 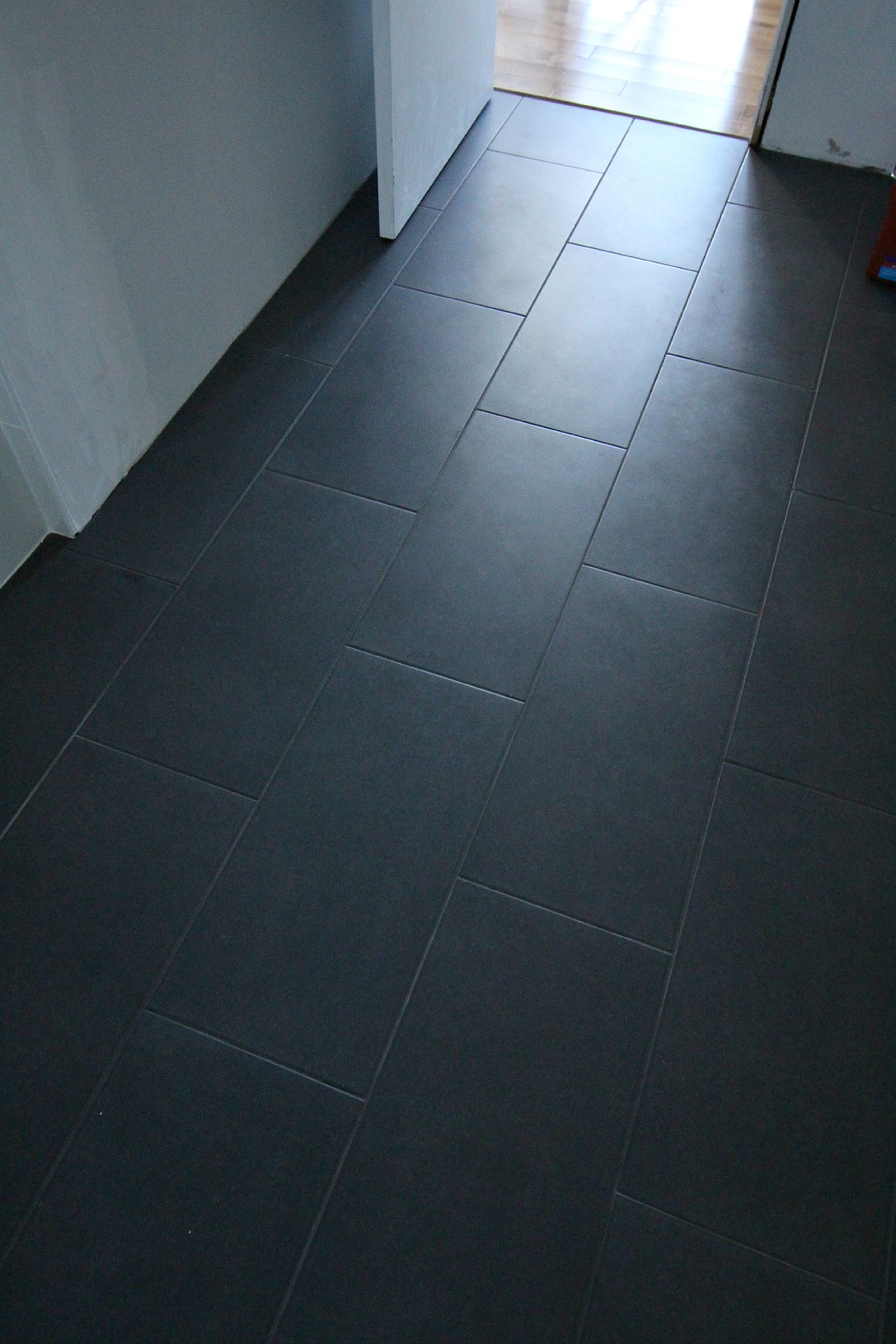 I should be feeling excited about how everything is coming together, but I’m disappointed that my tub got damaged in the process – especially given what a nightmare it was to get a non-damaged tub.  On the bright side, Hubs and I bathed inside the house for the first time in a long time and it felt amazing.  Plus I like my tile choices and now that tiling the bathroom is done, we can move forward with the bathroom renovation.  Our Kohler fixtures arrived and they are too gorgeous for words…details soon! 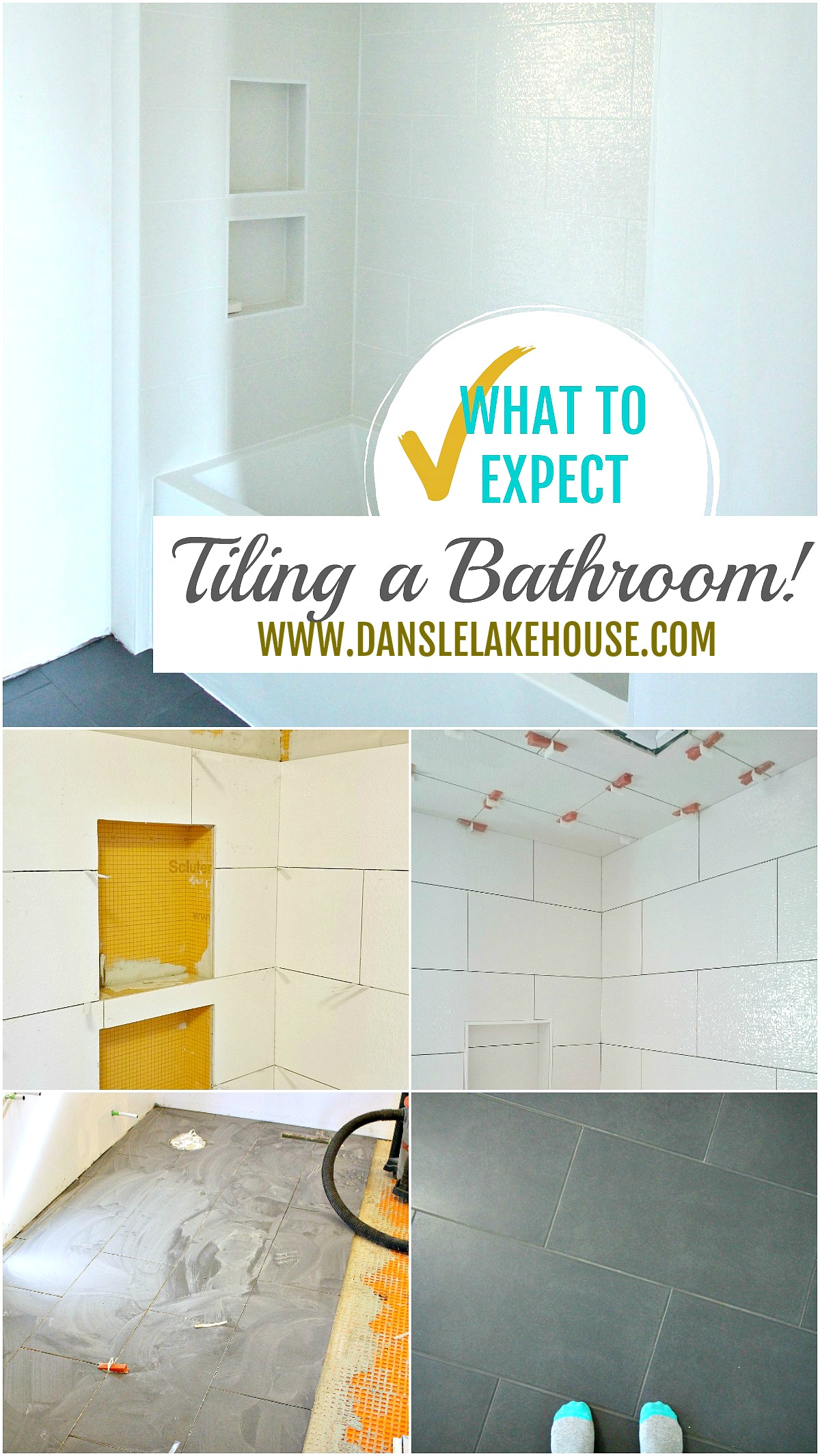