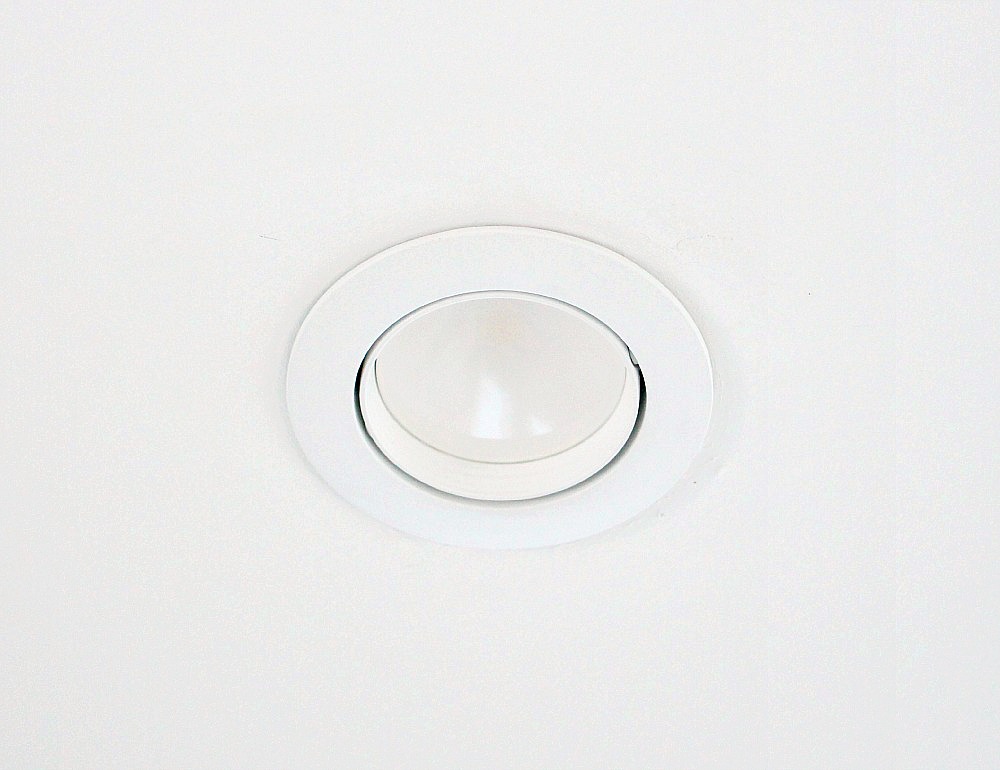 Our kitchen has two pot lights over the counter that I usually cropped out of photos because they just looked so terrible!  In the lakehouse tour, you can see them in the “before” photos, but they’re cropped out of every “after” shot of our aqua makeover.  They functioned well and I used them every day, but they were old and discolored, and one of them had just been coated in silicone by the silicone-happy former owner: 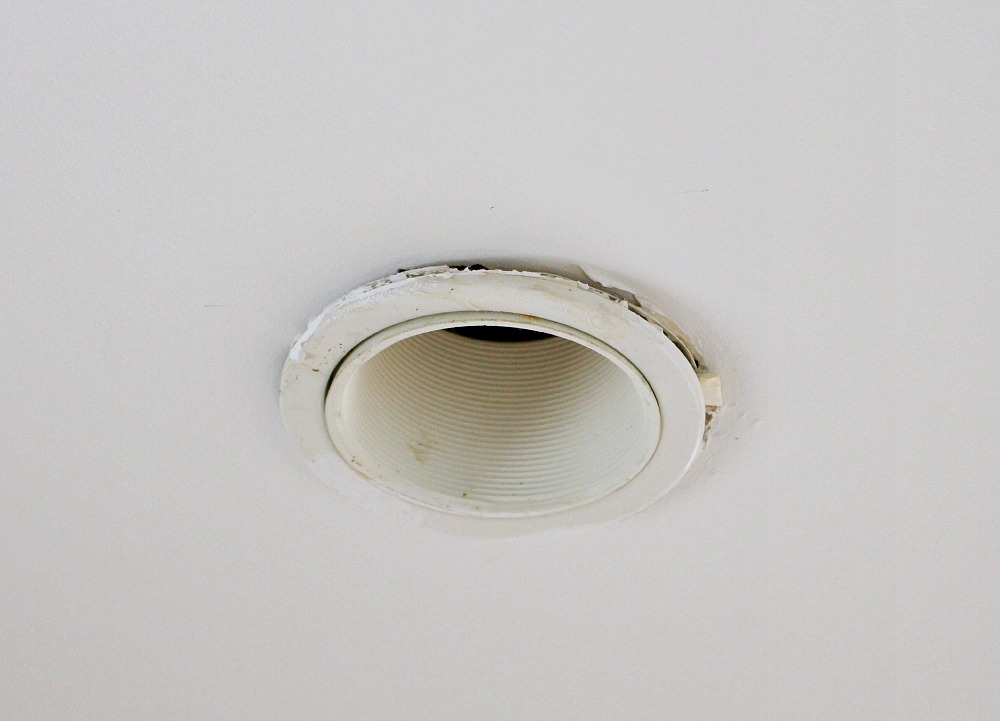 I’m seriously embarrassed that we lived with them for so long!

We had been wanting to replace them for awhile, but we weren’t enthusiastic about climbing into the attic to remove the cans.  I didn’t know how to update pot lights without replacing the can – or that it was even possible!  Recently one of the bulbs burned out so we headed to The Home Depot for a new one.  They’re $10!  I suggested to Handy Hubby that we finally replace the lights and purchase two fresh bulbs – I didn’t want to end up with two different bulbs in addition to wonky lights.  We sauntered over to the lighting section and pondered for awhile.  Finally, we made our selection and were about to head to the check out when a salesperson asked if we needed help.  We asked how difficult it would be to replace our pot lights, and if he had any tips.  He discouraged us from replacing them because removing the cans could really damage a ceiling.  Instead, he showed us the LED bulb and trim retrofit kits.  They’re actually a bit more money than purchasing new cans, but it is so much easier to use these kits to update the look and technology. 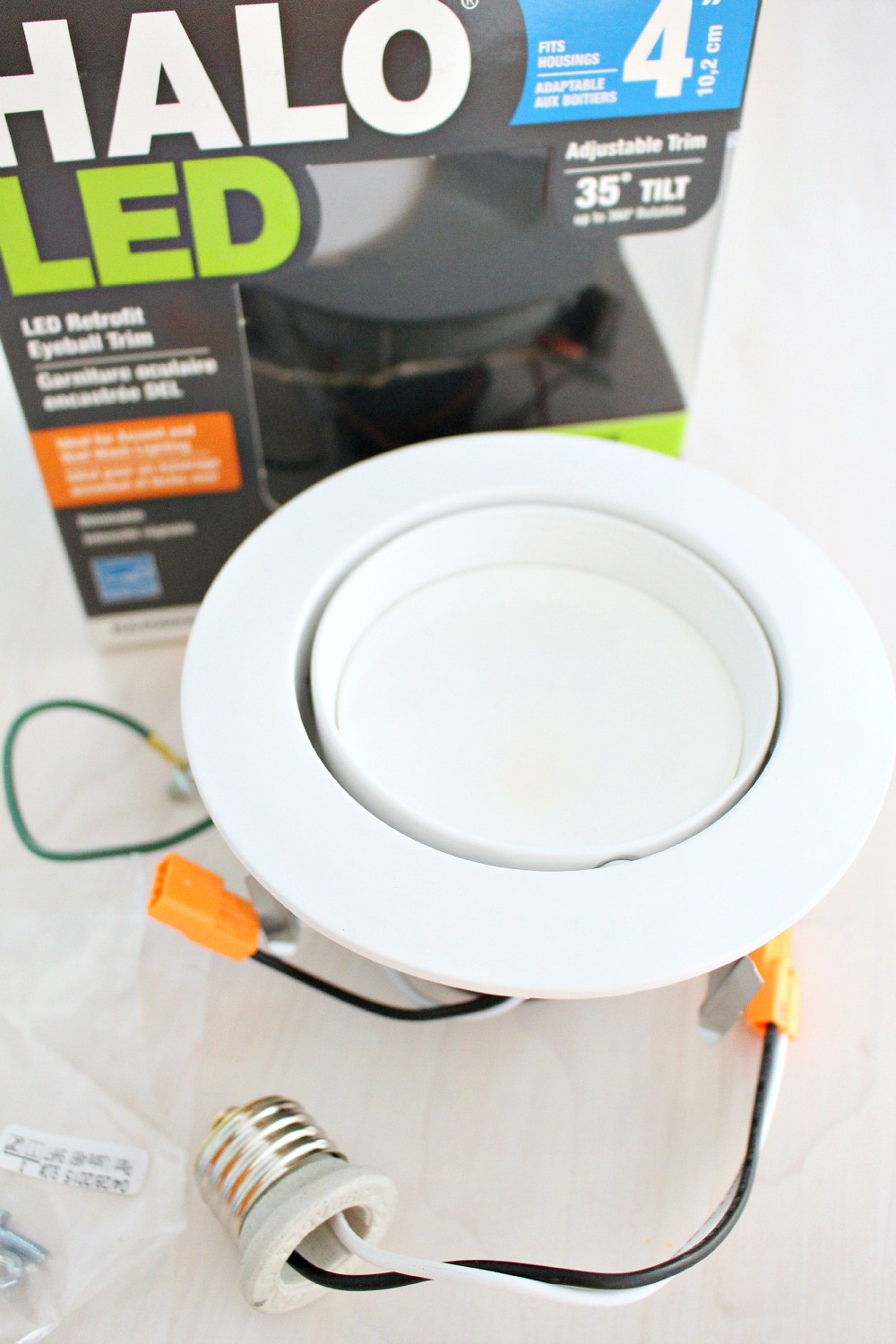 Here’s how to update pot lights without replacing the can.  First we bought two Halo LED 4″ retrofit kits from The Home Depot, for about $50 a piece.  This one is fairly similar. 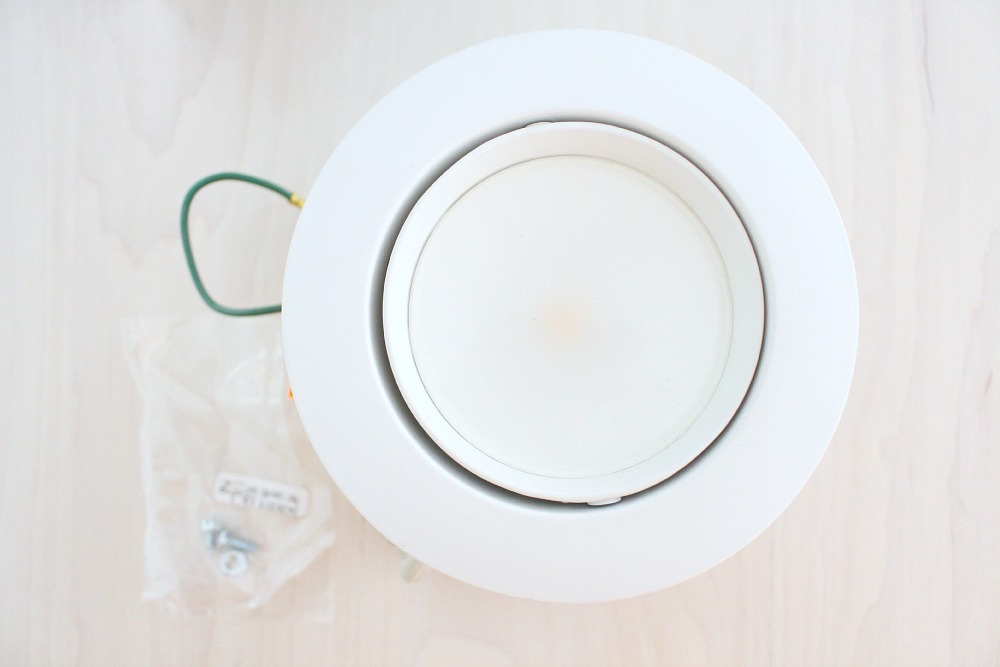 As with any electrical work, we turned off the power.  Then we removed the old pot light trim by gently pulling it down and then squeezing the metal retaining wires that held it in place. 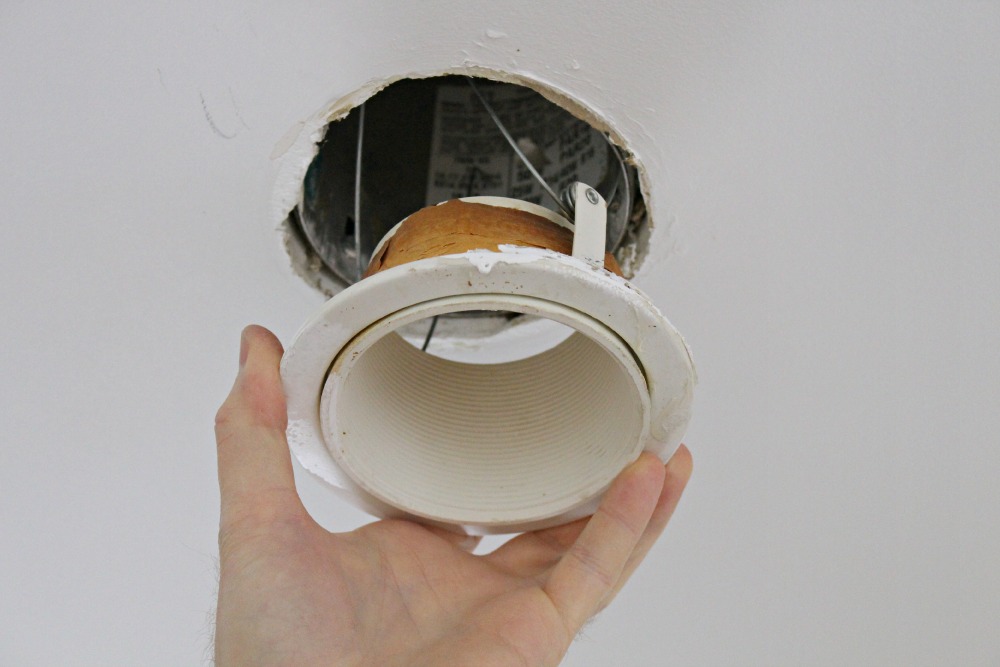 The arrow is pointing to the wires: 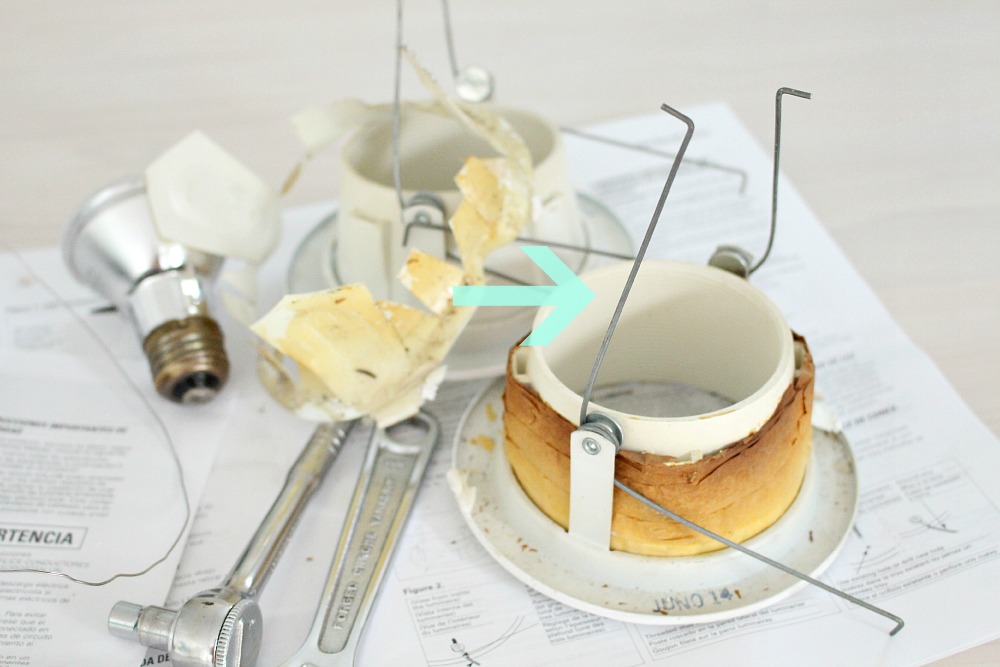 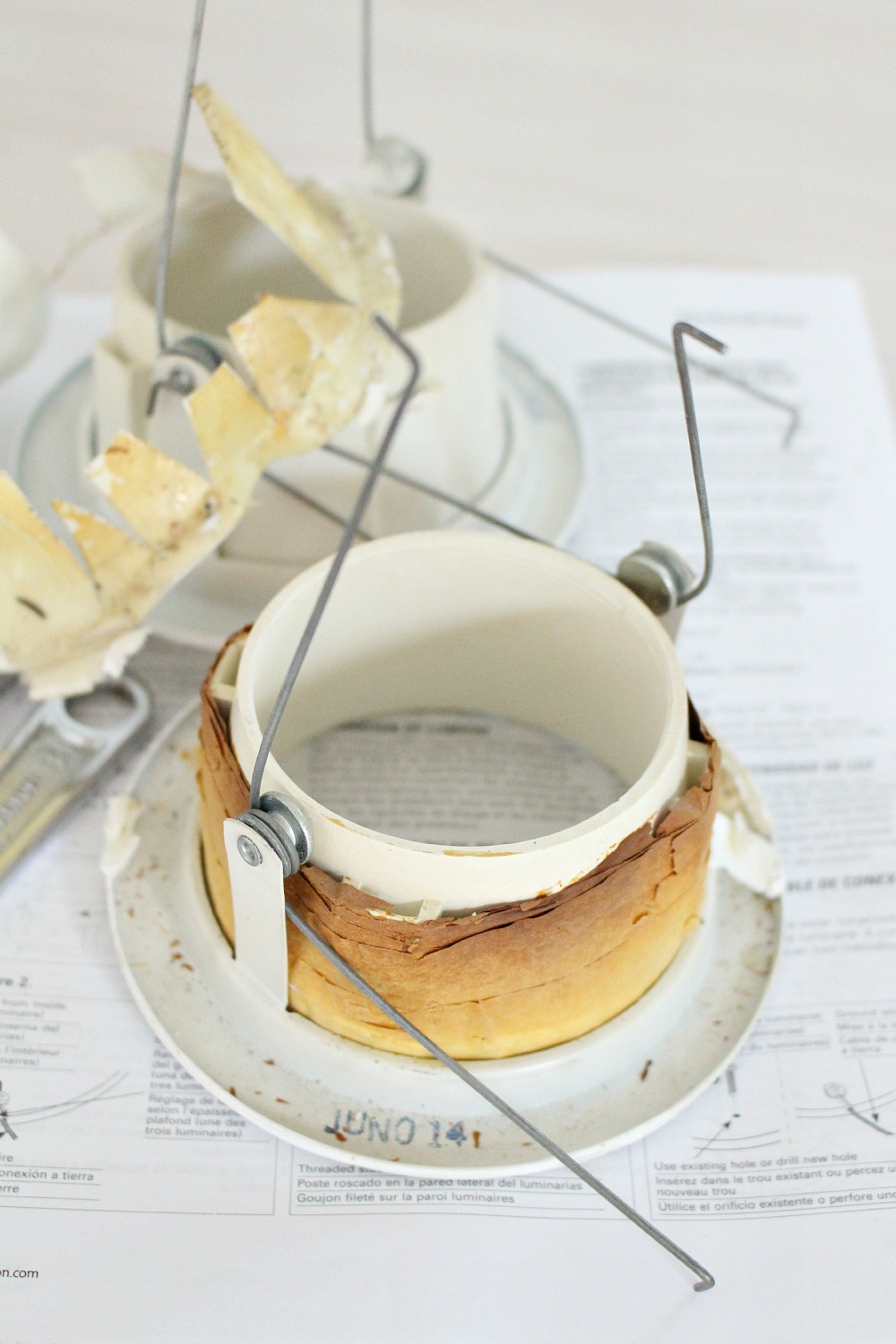 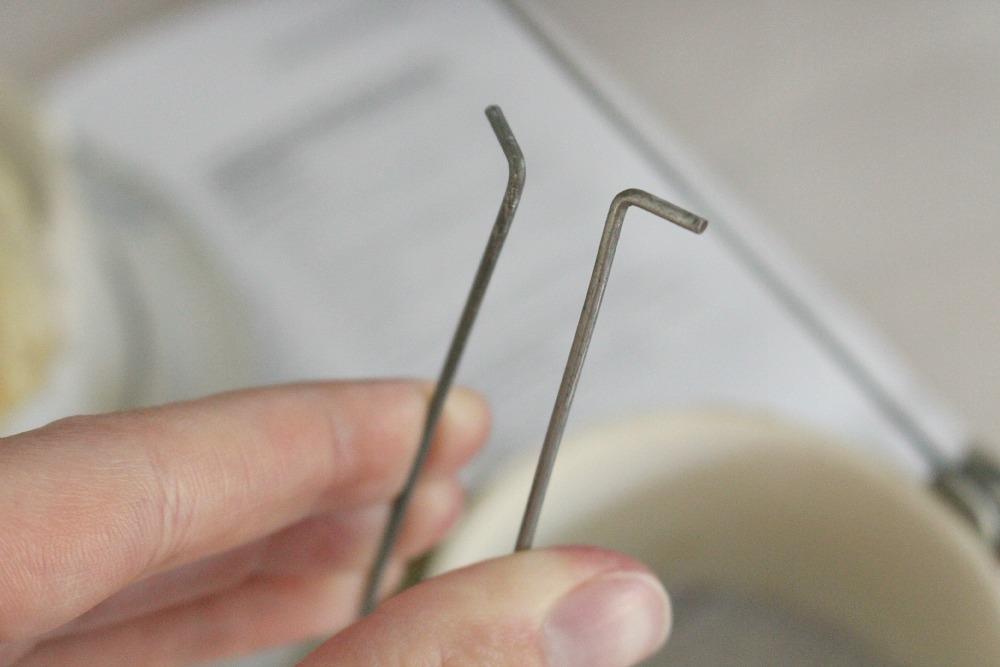 Then we were left with just the can, which was perfectly functioning and really not that old: 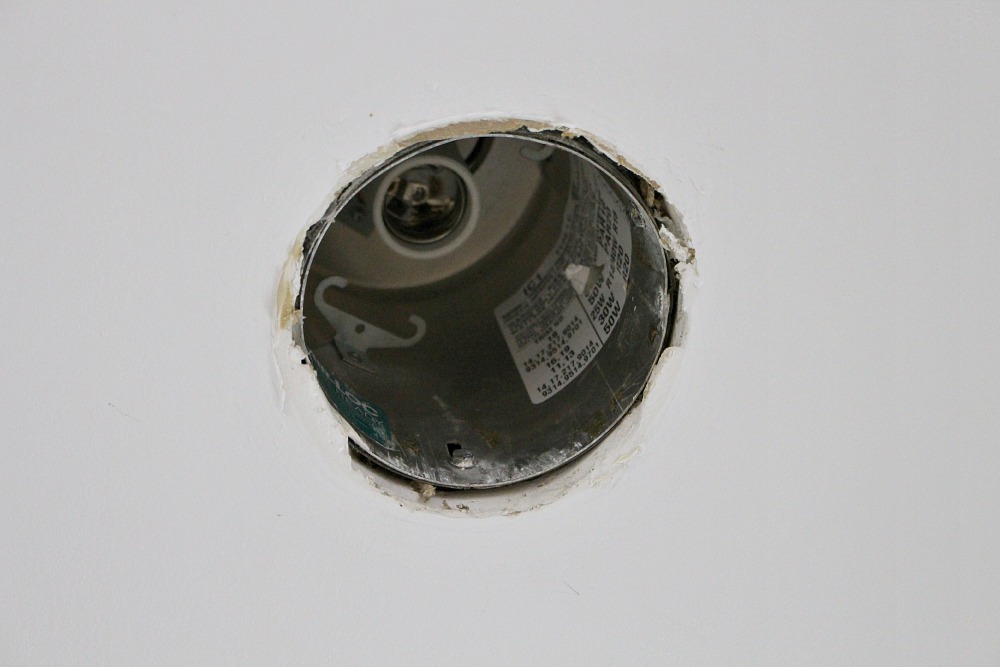 Then it was time to install the new light and trim retro fit kit! 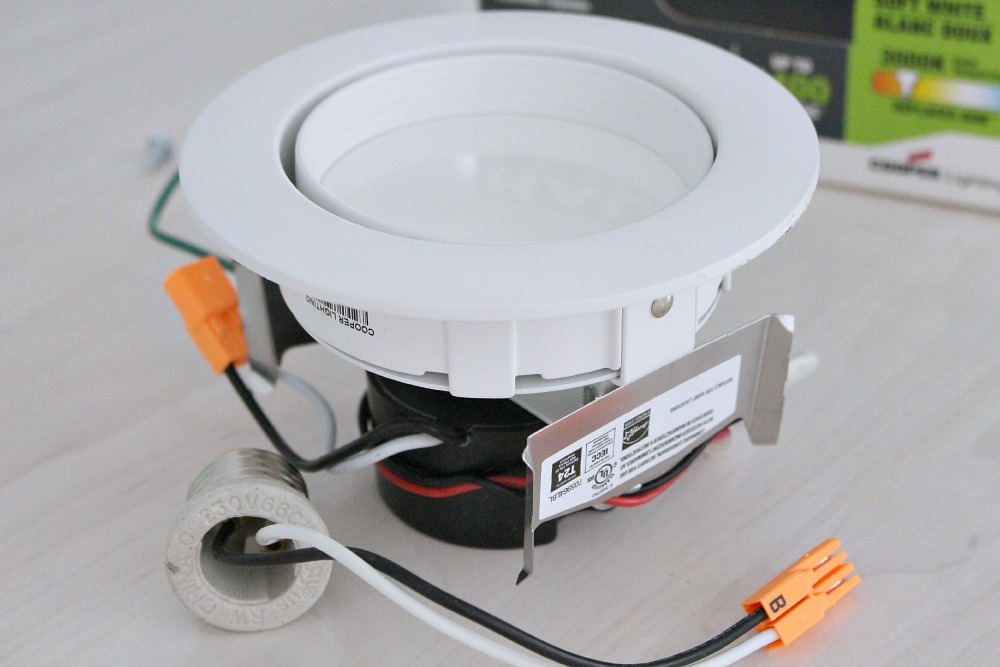 First we installed the light socket adapter.  Then we took the new LED and plugged it into the adapter.  With a screw driver, we used one of the self-tapping screws (included) and screwed the ground wire into an existing hole in the can.  Instructions are included with the kit, and we followed them completely. 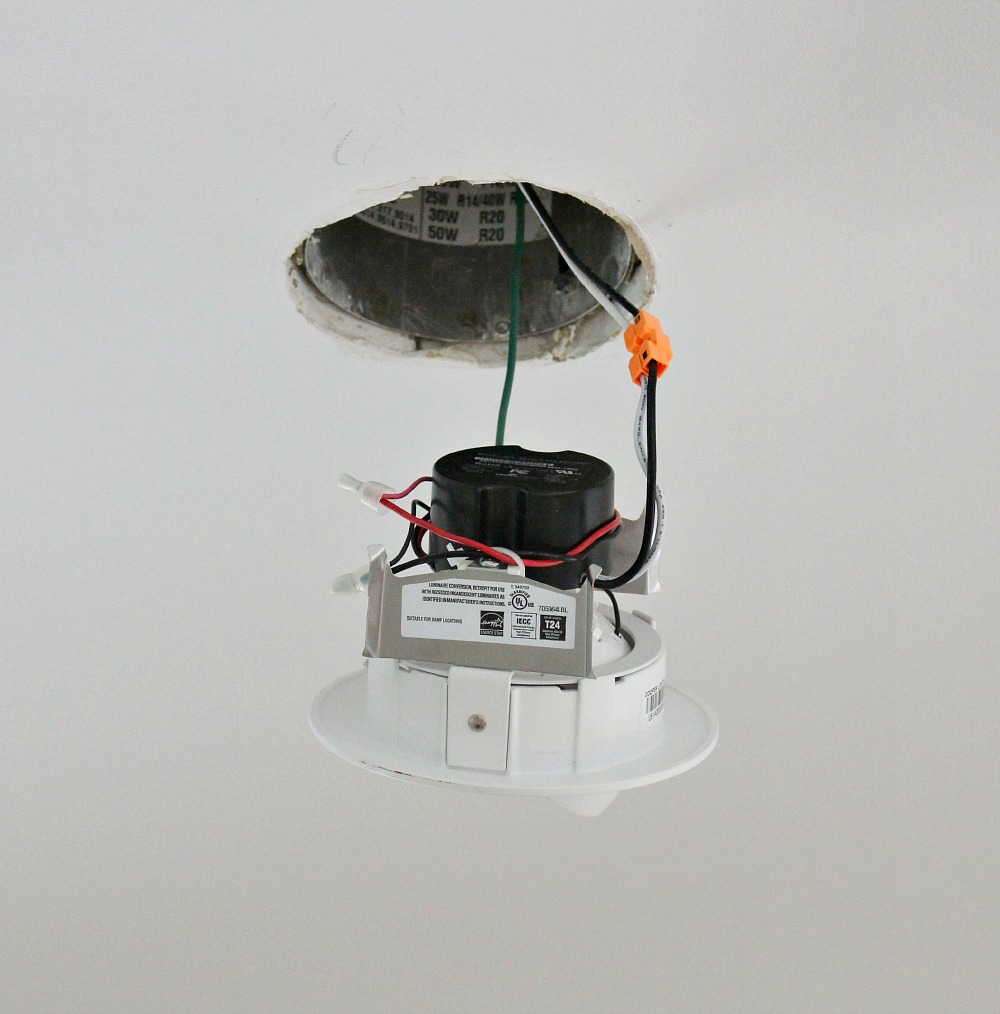 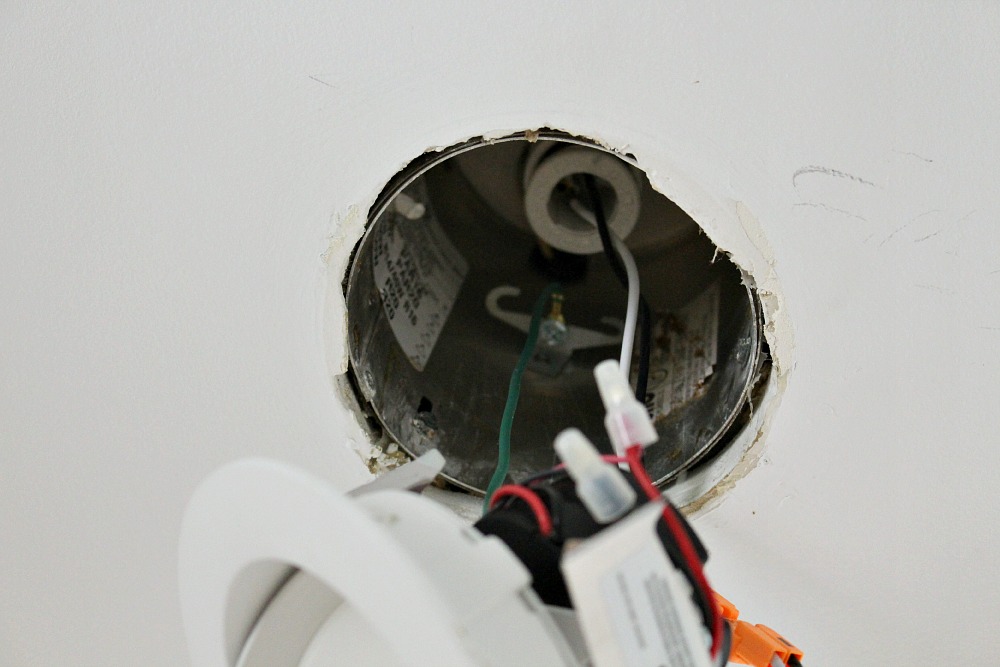 The installation was straightforward, except we hit ONE stumbling block: when we tried to push the trim in tightly against the ceiling, the can shifted too so we couldn’t get a nice, flush fit.  Genius Hubby (I call him “Handy Hubby” for a reason), figured out that if he threaded a wire through the gap between the gimbal and the trim, looped it around a fixed point in the can, and then back through the trim, he could pull down on the wire to hold the can down while pushing the new trim piece up.  It worked!  Once it was tightly in place, he pushed the wire back through and removed it.  You might not need this step, but it’s a handy hack to know, just in case. 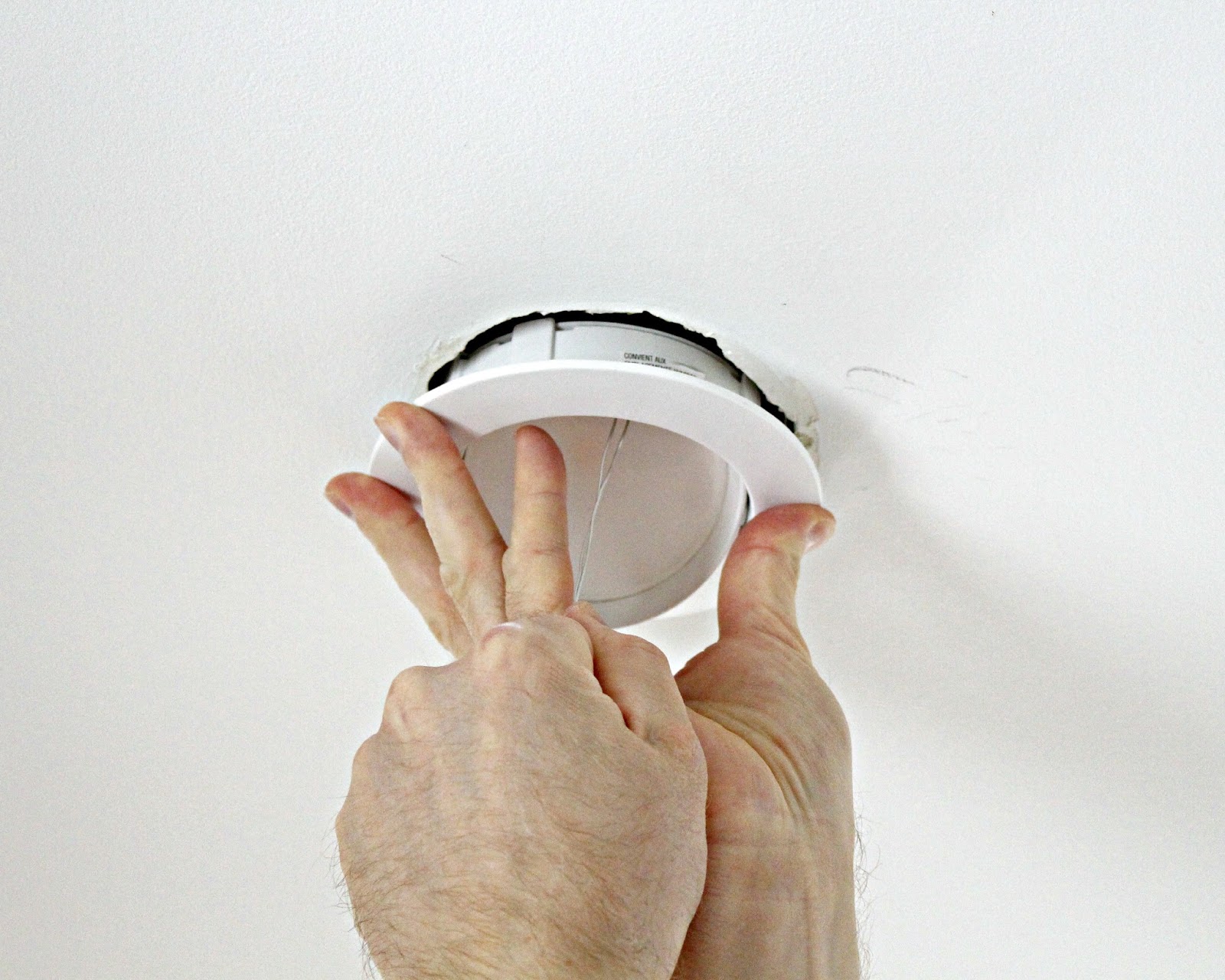 The light bulbs should last 50,000 hours and only draw 10 watts, but they are SO much brighter than our old lights, which were 50 watt halogens.  Now that the days are getting shorter, I love that I have brighter kitchen lighting, although I do miss the halogen bulbs a tiny bit.  They were dimmer, but a touch warmer.  These are bright and offer a very white light – much better than flouescent, but I’m still clinging to my incandescent bulbs and irrationally resistant to liking any other type of bulb.

It goes without saying, though, that they just look so much better now!  You can see the after/before comparison below: 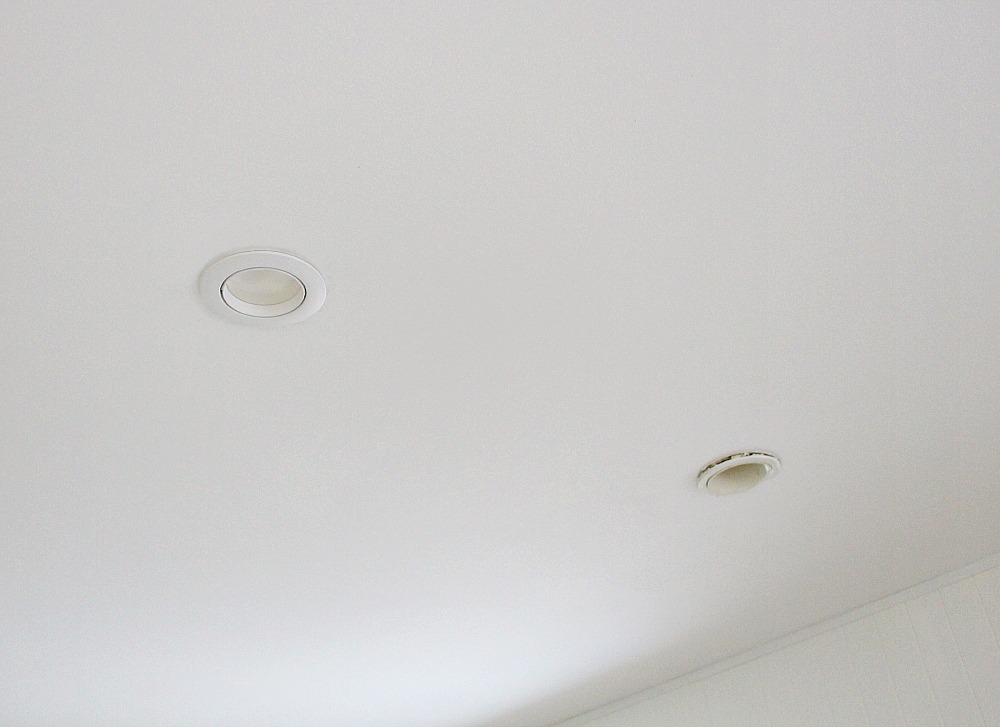 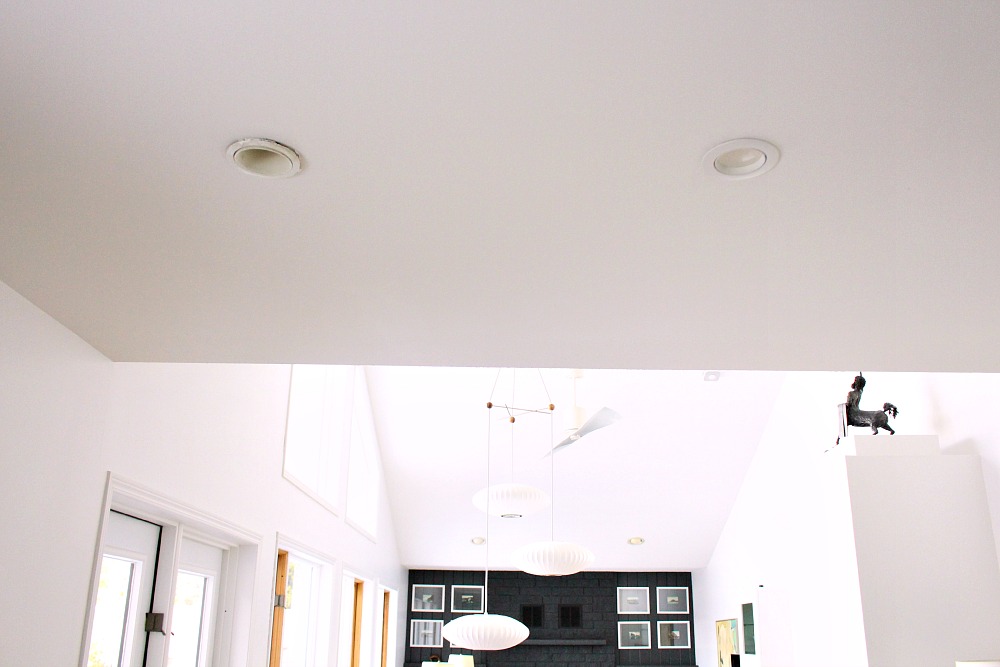 And with both pot lights updated, the kitchen feels brand new!  It’s those little worn out things that can make a space feel dated and dusty. 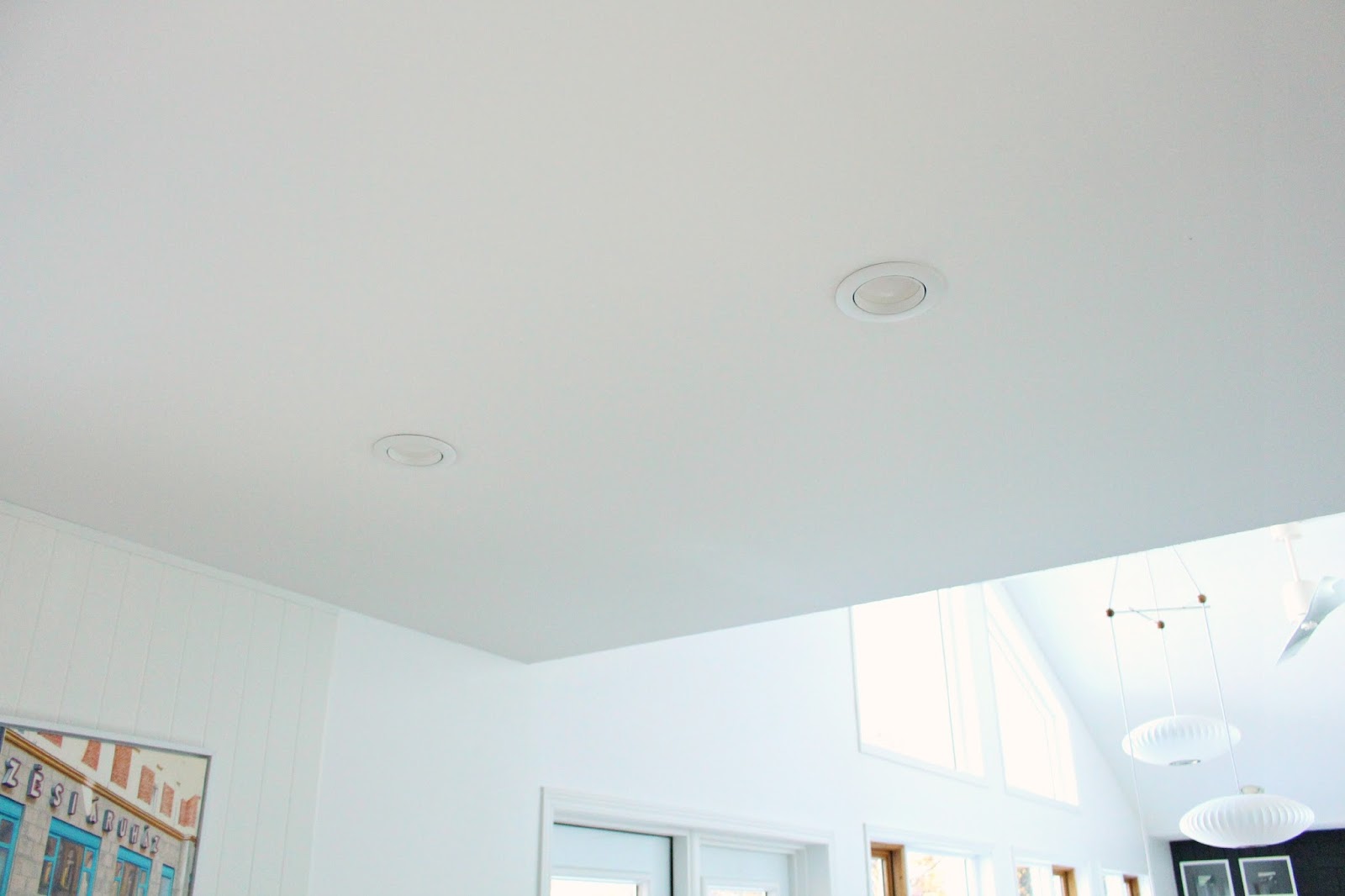 Now we’re eyeing up the eyeball pot lights above the fireplace and thinking that we might use this same style of LED retro fit to update those, too… 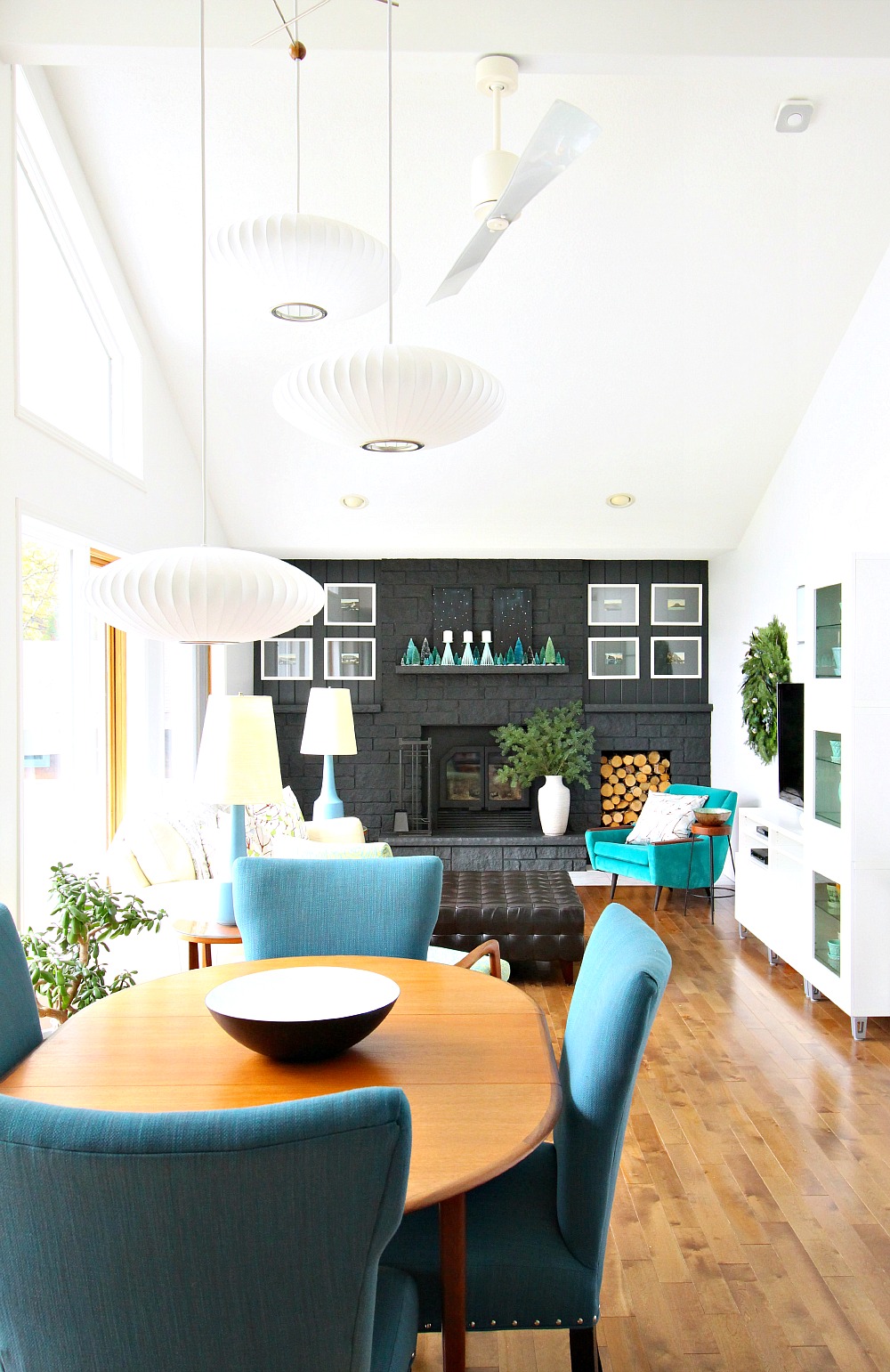 And that’s how to update pot lights without replacing the can! 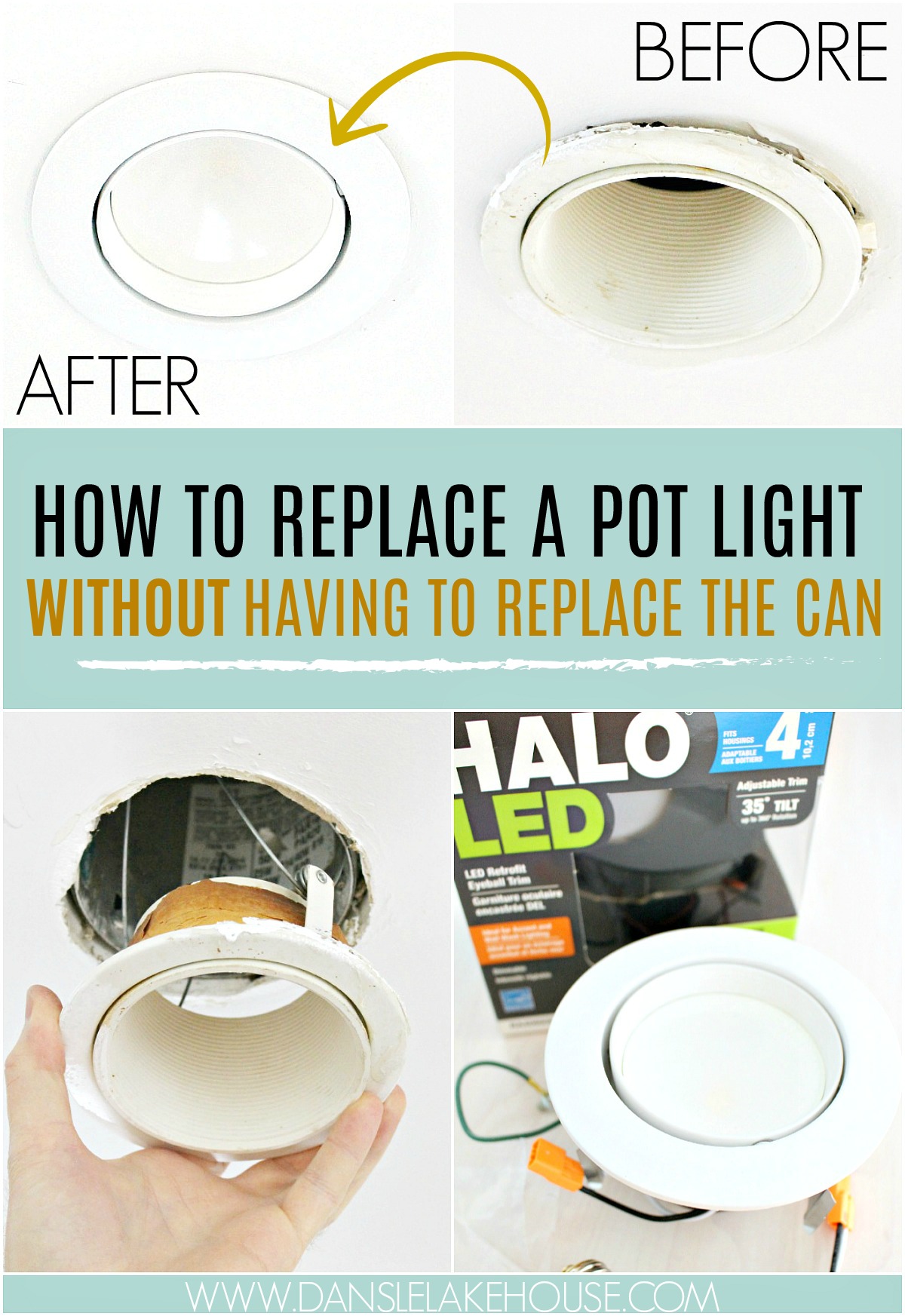