Check out this easy cranberry and “snow” mason jar centerpiece!  While I was in Ottawa, Ashley plied me with spiked eggnog and mulled wine and that’s why I very willingly helped her decorate her whole house for the holidays.  You already saw the the birch slice ornaments we made one night.  She also whipped up some gorgeous outdoor decorations and put together really simple and festive evergreen sprays for her stairwell.  Then we tackled the tree, the mantle, and set up the ornament stands I made with Handy Hubby.  Finally, we put together a simple cranberry and “snow” mason jar centerpiece for her dining room table: 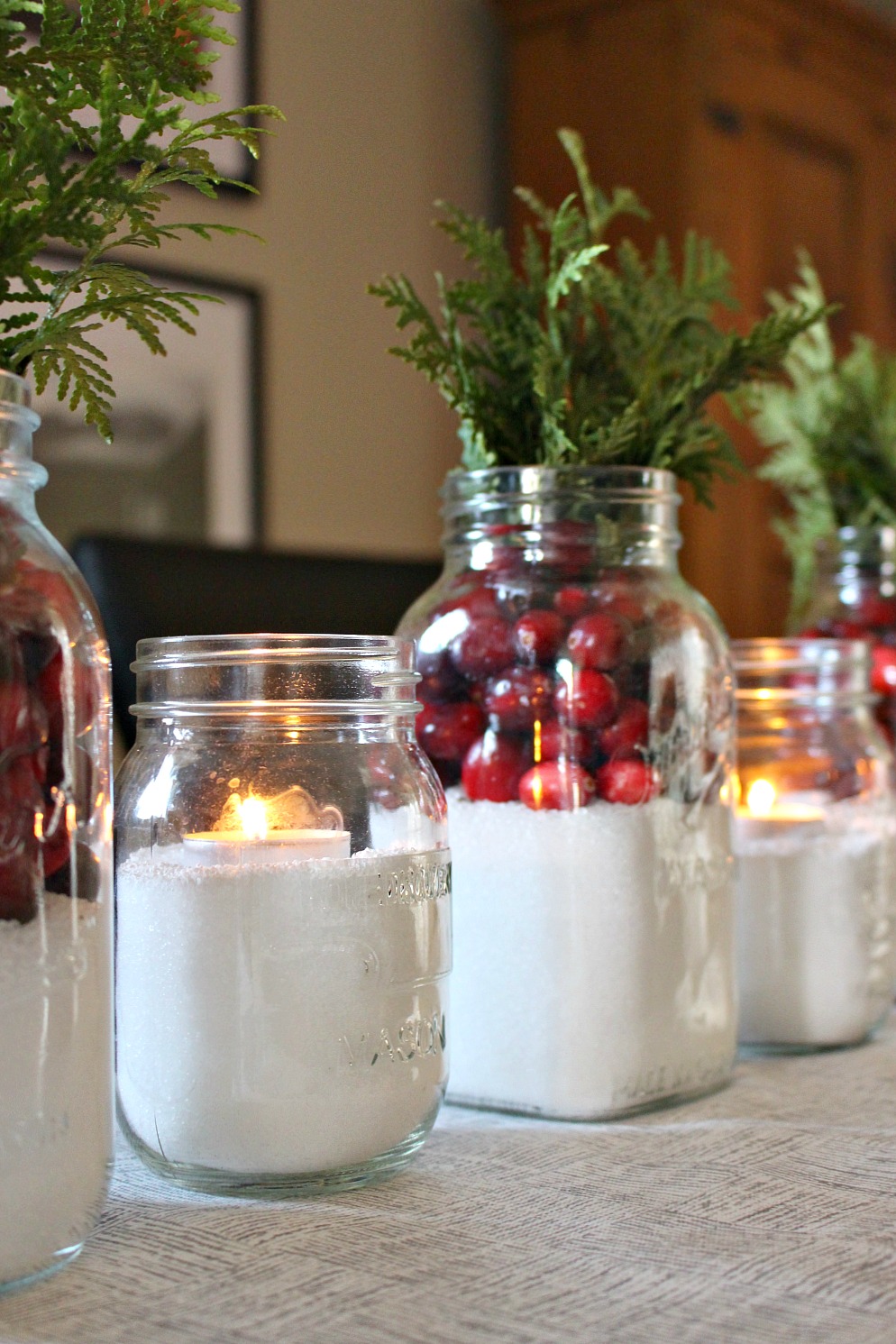 When we were done, Ashley’s friend Amy admiringly commented that, “it looks like Pinterest in here”.  Ashley is a huge fan of Pinterest and that’s where she spotted cranberry, cedar and Epsom salt centerpieces by Madigan Made (with the mason jar twist by Yellow Bliss Road).  Ashley had a basement full of glass jars and we stumbled across a huge jug of Epsom salt – and a giant bag of fresh cranberries – at Costco one night, so this super easy DIY cranberry and “snow” mason jar centerpiece had to happen. 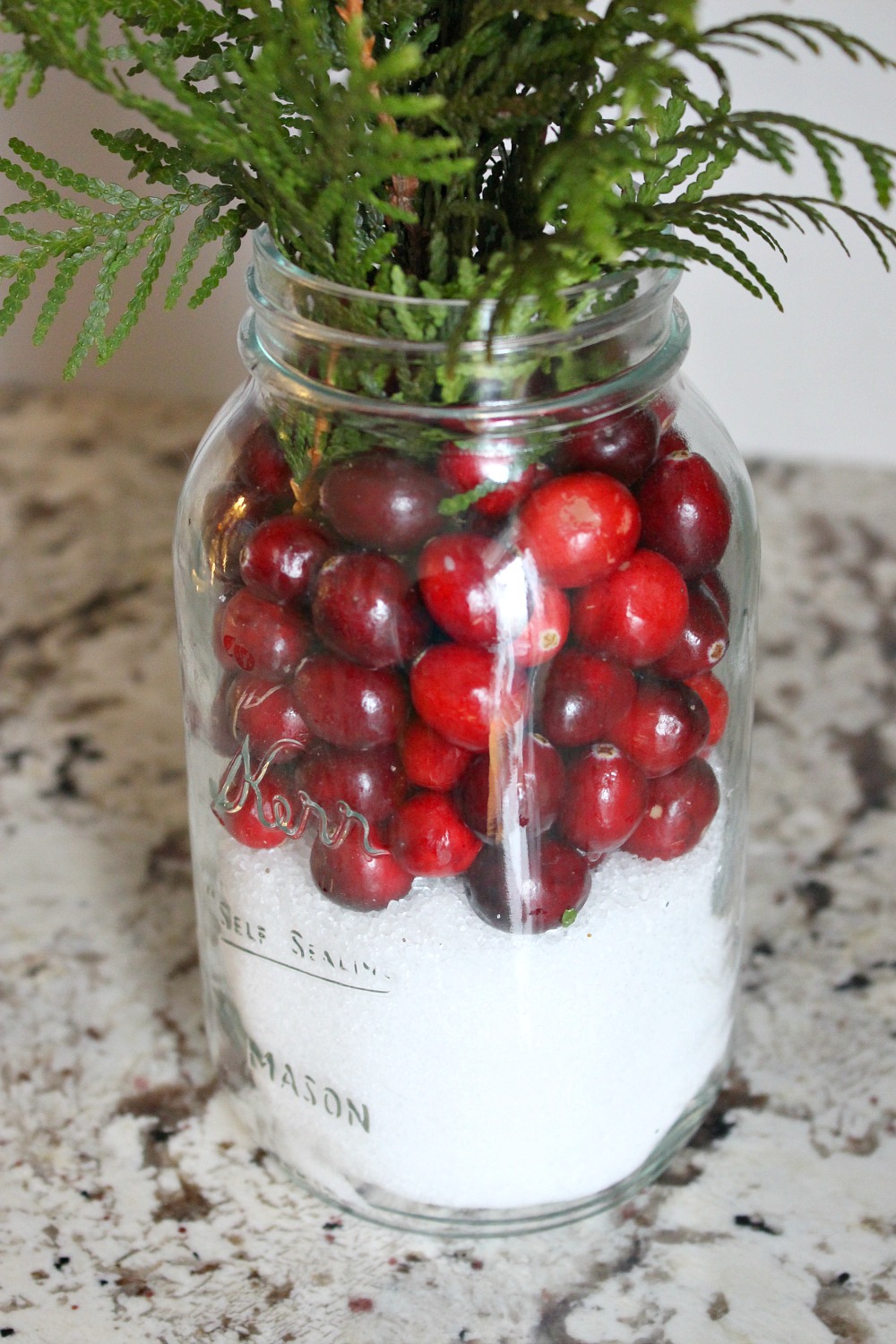 There was such a nice ambiance when the votives were lit: 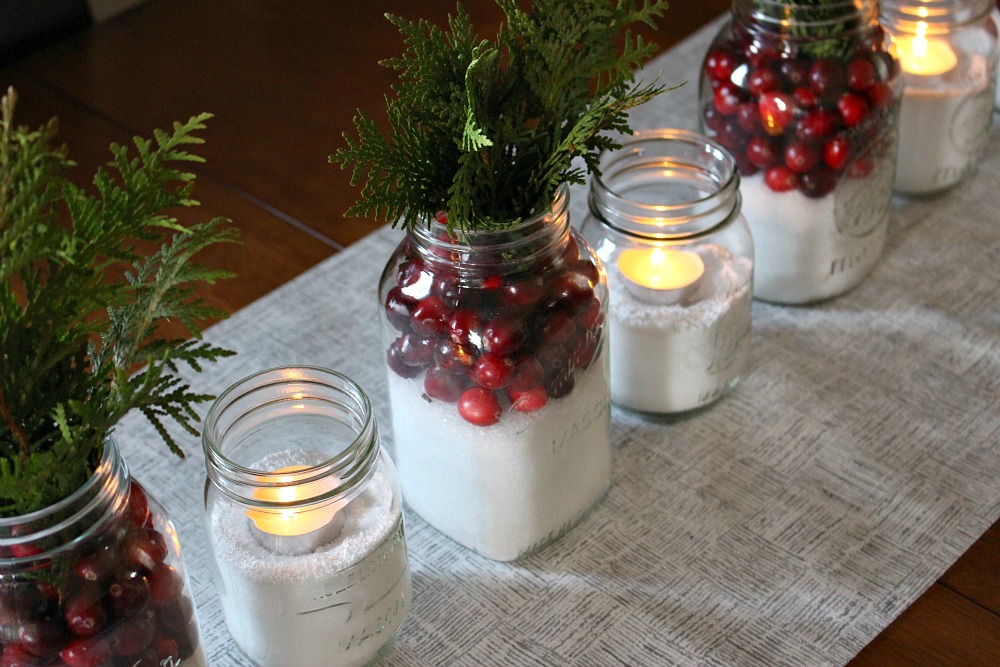 Making this cranberry and “snow” mason jar centerpiece was so simple:  we added some Epsom salt to half the jars, inserted some fresh cedar boughs into the center, and then filled up the rest of the jar with fresh cranberries.  We filled the other half of the jars with only Epsom salt and added a candle (we substituted a tea light because it’s tidier than a votive).  So easy! 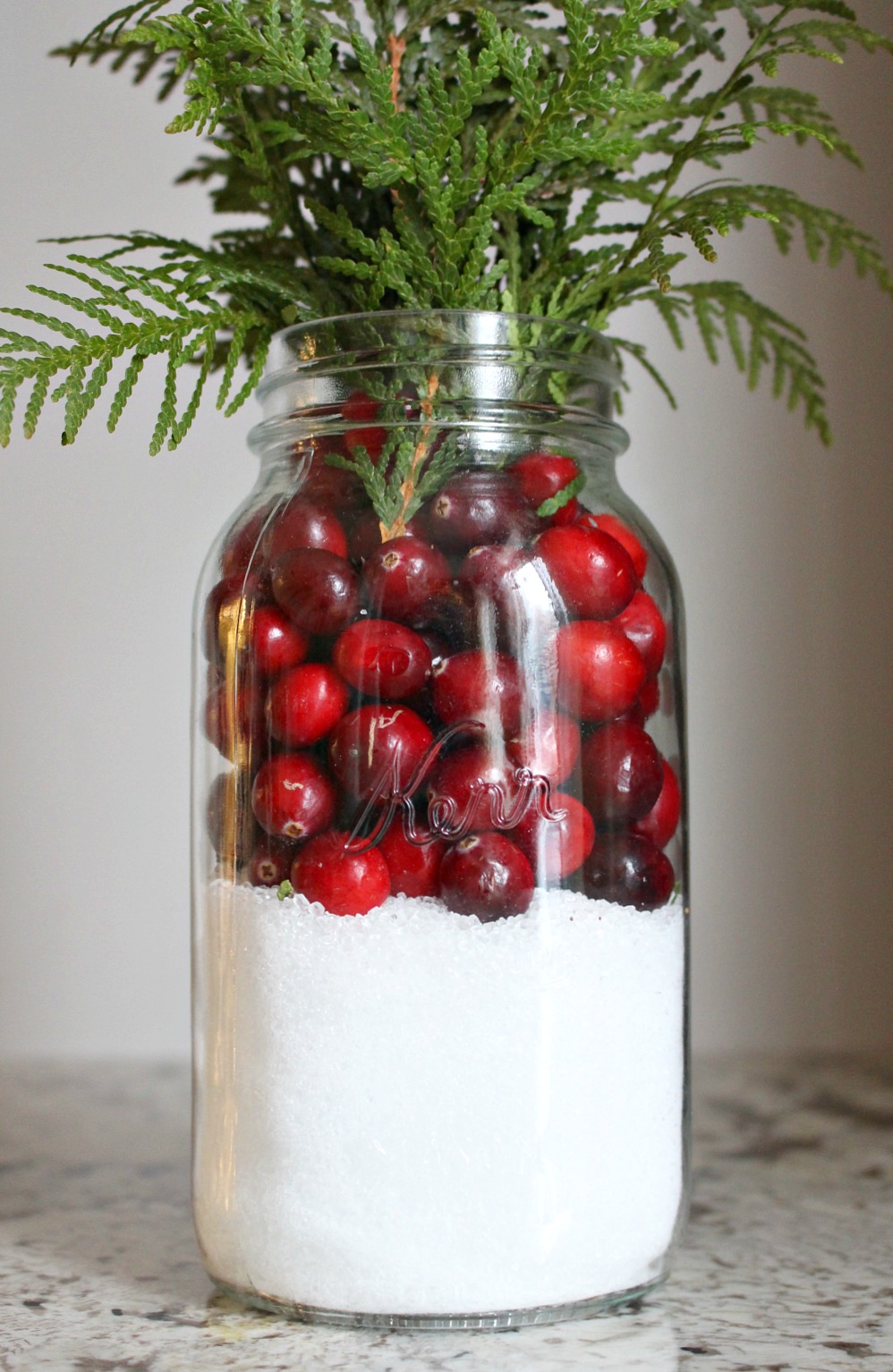 Here’s a shopping list to make this DIY cranberry and “snow” mason jar centerpiece even easier:

There’s just one thing to note:  once the tea lights had burned, we noticed that the texture of the salt changed.  It started off like normal salt crystals: 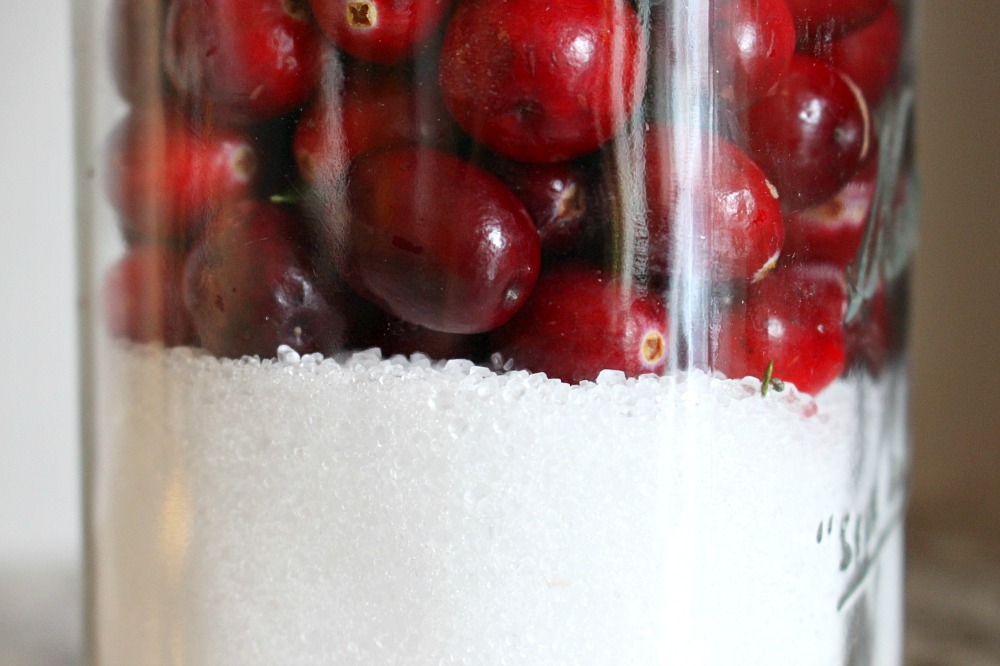 But in the shorter mason jars, the heat from the candle turned the salt a different texture – kind of like clumpy icing sugar.  The “glitter” was lost, but it still looked like snow. 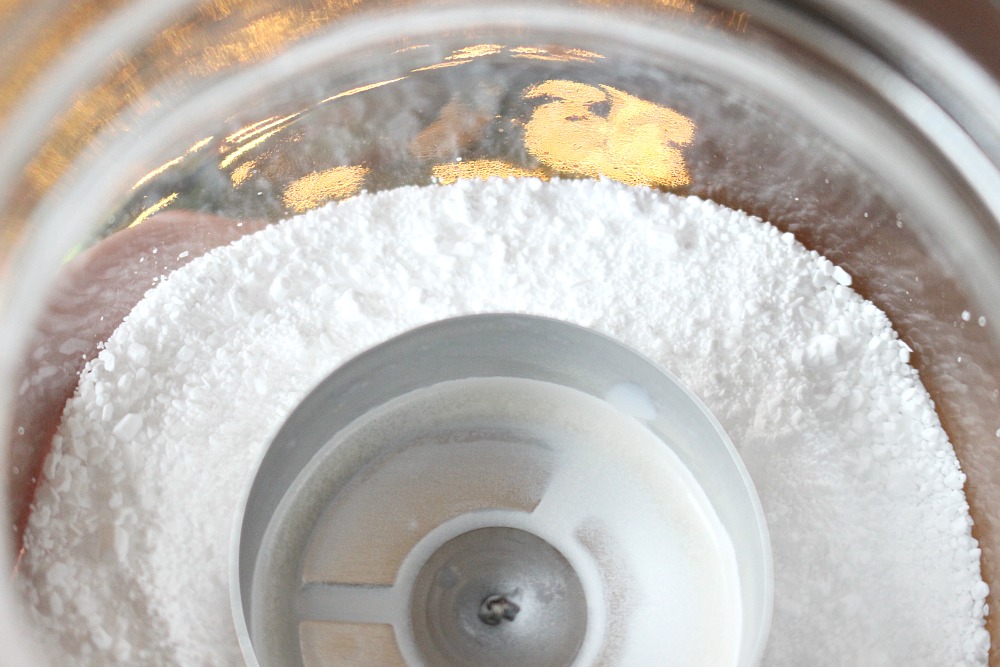 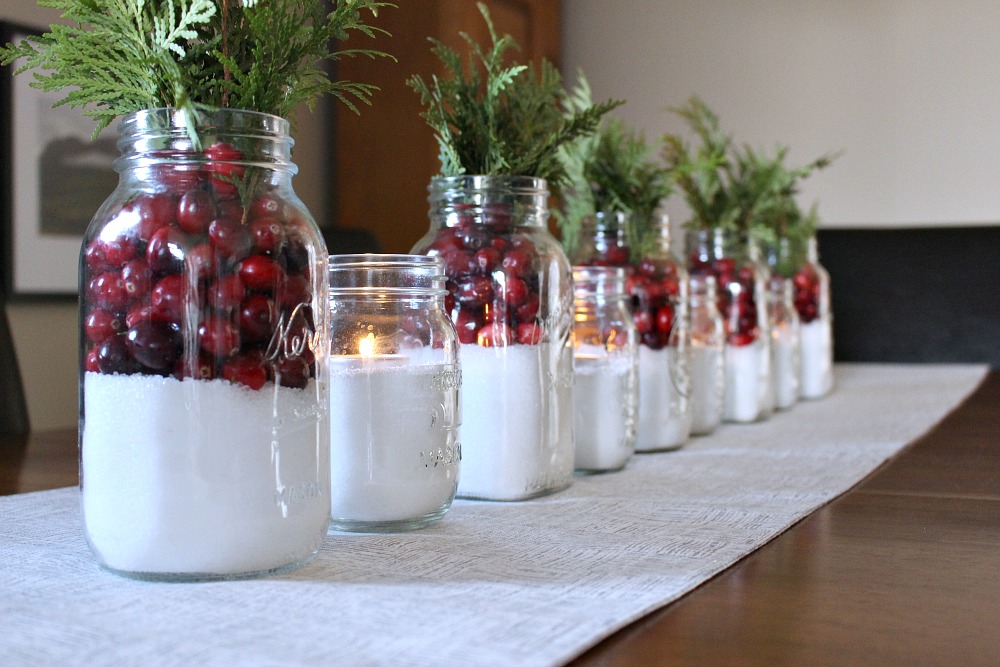 I love this idea for an easy, last minute holiday centerpiece.