Hubby and I recently conquered a major DIY phobia: drilling holes in tile, so today I’m sharing what we learned about how to drill a hole in ceramic tile.  In the townhouse bathroom we skipped it altogether by purchasing a tension shower curtain rod and suction-fit soap dish for our freshly tile tub surround.  With the lakehouse bath reno, we asked the tilers to drill the holes for the handheld shower bar and wriggled out of that task.  We were two for two!  You can imagine our dismay when we opened the box for our new toilet, only to realize that it required drilling THREE holes into our brand new tile floor.

Spoiler alert: we did it, without cracking or damaging the tile!  Here’s what we used + instructions for how to drill a hole in ceramic tile, plus a couple of tips we learned the hard way (is there another way?) 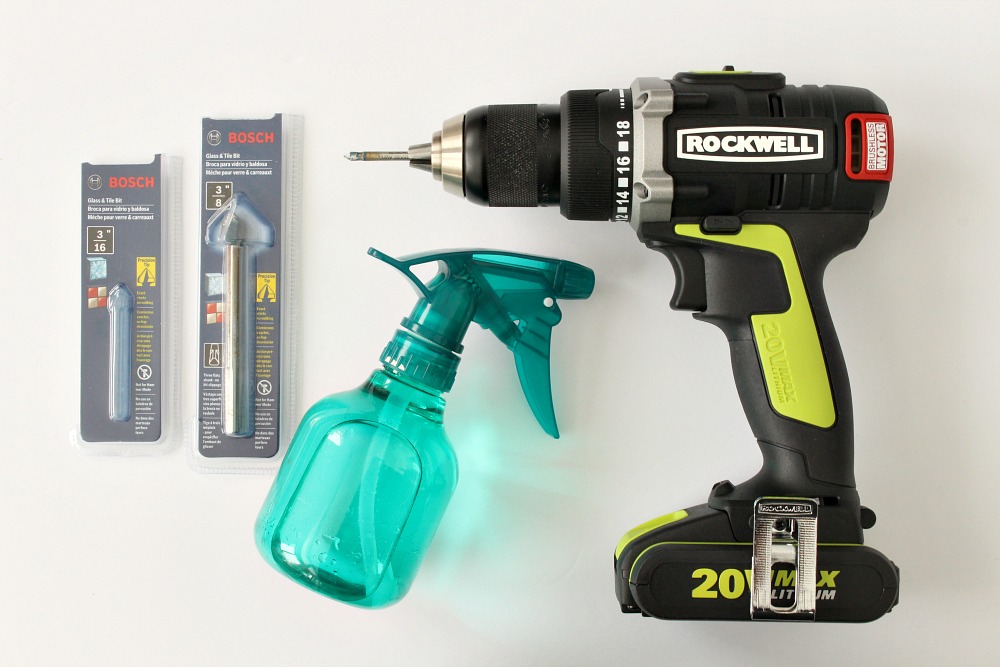 *Purchase a brand new drill bit because the sharpness will reduce the risk of chipping or cracking the tile.  Because these bits are drilling into such a hard material, they do wear out quickly.  Ours was purchased from The Home Depot and was labelled clearly for ceramic tile.  Porcelain tile requires a different bit – ideally a diamond-tipped bit.  Again, at the hardware store these bits should be labelled clearly so you can find the right one for the job.

Step One:
If you’re drilling into a wall, you’ll want to protect the surface below – just in case you drop a drill bit (or the drill, thanks to a serious hand cramp).  We drilled into our floor tile, but we still put down an old towel to kneel on (knee pads would have been awesome) and kept another towel nearby to wipe up water and gunk.

Step Two:
We marked where we needed the holes and then applied a piece of painter’s tape, marking again (measure twice!) where the holes should go on the tape.

Step Three (Optional):
We didn’t do this but wish we had: apply a tiny bit of grease to your drill tip before using, because the water will cause some rust spots to form.  You need a brand new drill bit for drilling tile, so it’s likely we won’t use this much anyway. 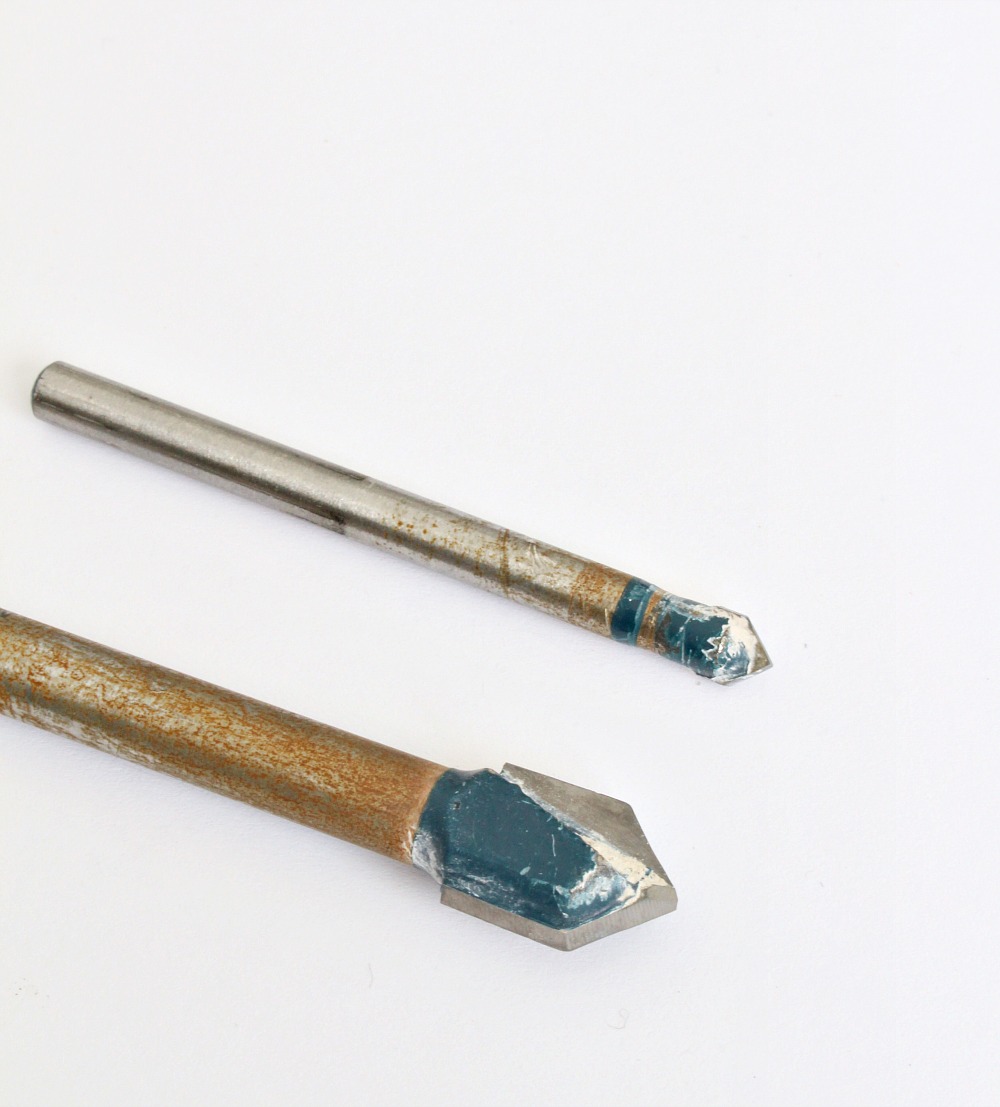 Step Four:
We filled a spray bottle from the buck store with cool water and sprayed the end of the bit with a couple blasts of water.

Step Five:
Applying constant pressure and using a low speed (we did about 400rpm, you can even start at 100 or 200 rpm), we started drilling with the smaller carbide-tipped bit.  The tape helped keep the drill from skipping – and protected the floor in case it did.  With the hole started, we removed the tape and kept drilling.

You might be wondering why we did this miserable job twice?  Drilling a pilot hole helps guide the bigger bit.  The bigger bit on its own would probably run away more easily – you can see in the photo above its tip isn’t as sharp.  Drilling a pilot hole also reduces the amount of work the larger bit has to do, which reduces heat and stress in the bit.  Ultimately, we wanted to avoid the bit breaking and applied the same practice from metal and wood working to our tile drilling job: start with a smaller bit to create a pilot hole.

Step Six:
This was a two person job: Hubby drilled and I continually sprayed the tip of the drill bit/hole (not the drill).  The water helps remove some of the dust and debris as well as keep the tile and bit cool, which prevents the bit from overheating and breaking.  Every now and then we’d pause, and I’d wipe up the water and mortar that oozed out, and then give it a fresh blast of water before we started drilling again. 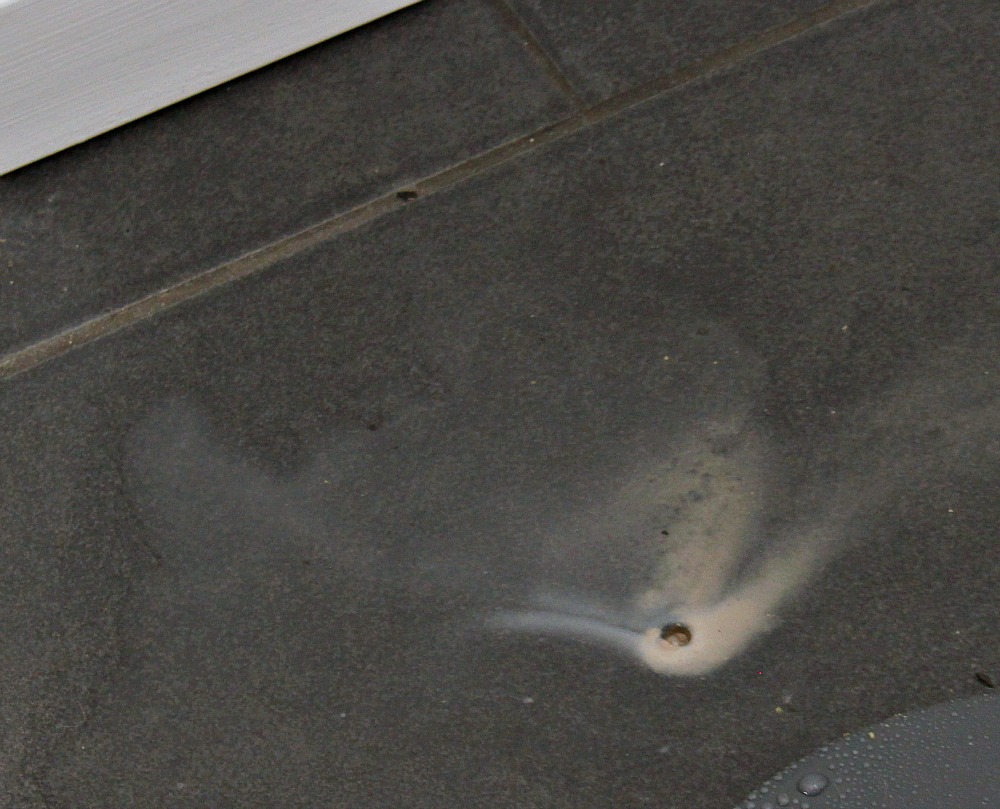 Steps Seven (to a Million):
Drill, drill, drill.  Drilling into ceramic tile requires persistence because you have to work very slowly, being careful not to apply too much pressure on the drill.  We really had to clear our schedules for drilling these holes because the low speed meant this task took a long time, with a few breaks in between.  On one break, we quite literally watched an episode of 2 Broke Girls, on another, we made dinner.  I’m certain we were too cautious, because when the tilers drilled the holes they certainly didn’t fanny about with them for an entire weekend (on the other hand, they probably had a better, more expensive drill bit).  Hubby says this really created some major pain in his hands from holding the drill for so long – just a head’s up! 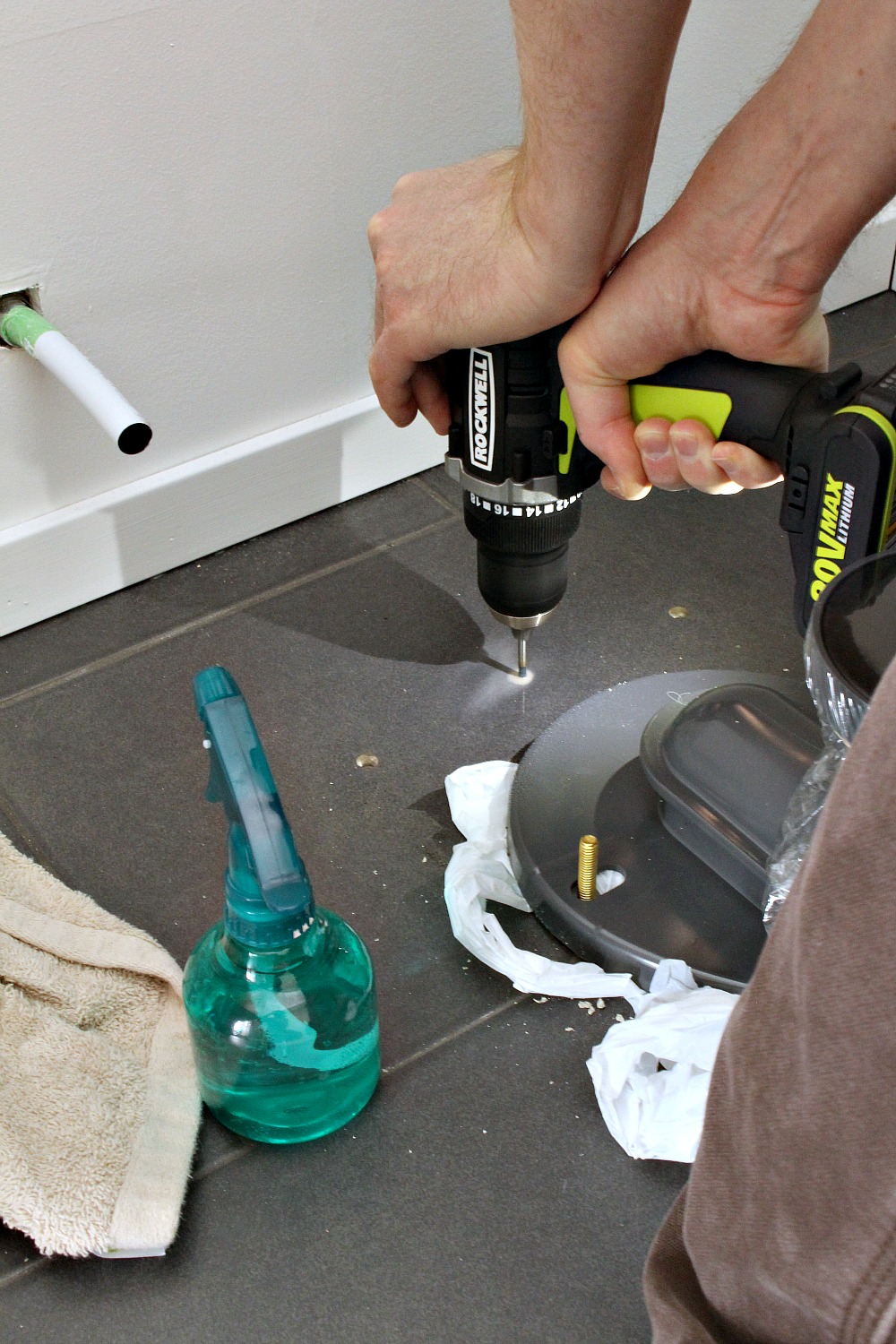 Step Eight:
More drilling!  When we were through with the smaller bit and had successfully drilled a hole, we switched to the larger bit and repeated the process to actually make the hole size we needed to install the toilet.

And, voila, a hole in our brand new tile floor (weep).  Please take some time to marvel at it, because a lot of energy went into making this one hole: 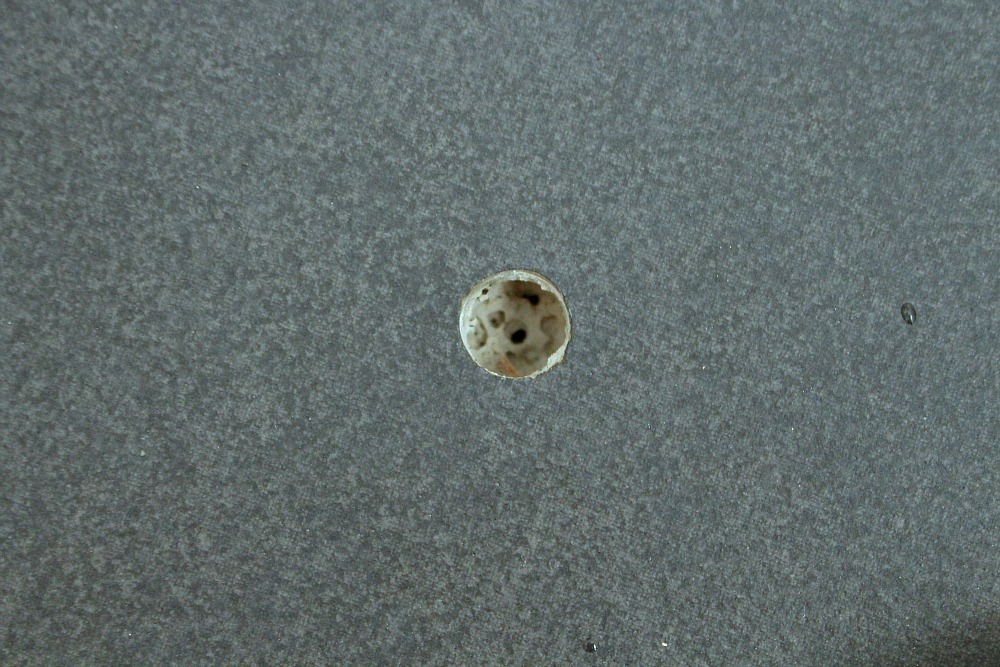 Rockwell Tools generously offered to send us a tool to get projects done around the lakehouse faster, and although I wanted a mini table saw, Hubby was pumped for this cordless drill and driver (our other drill is corded). 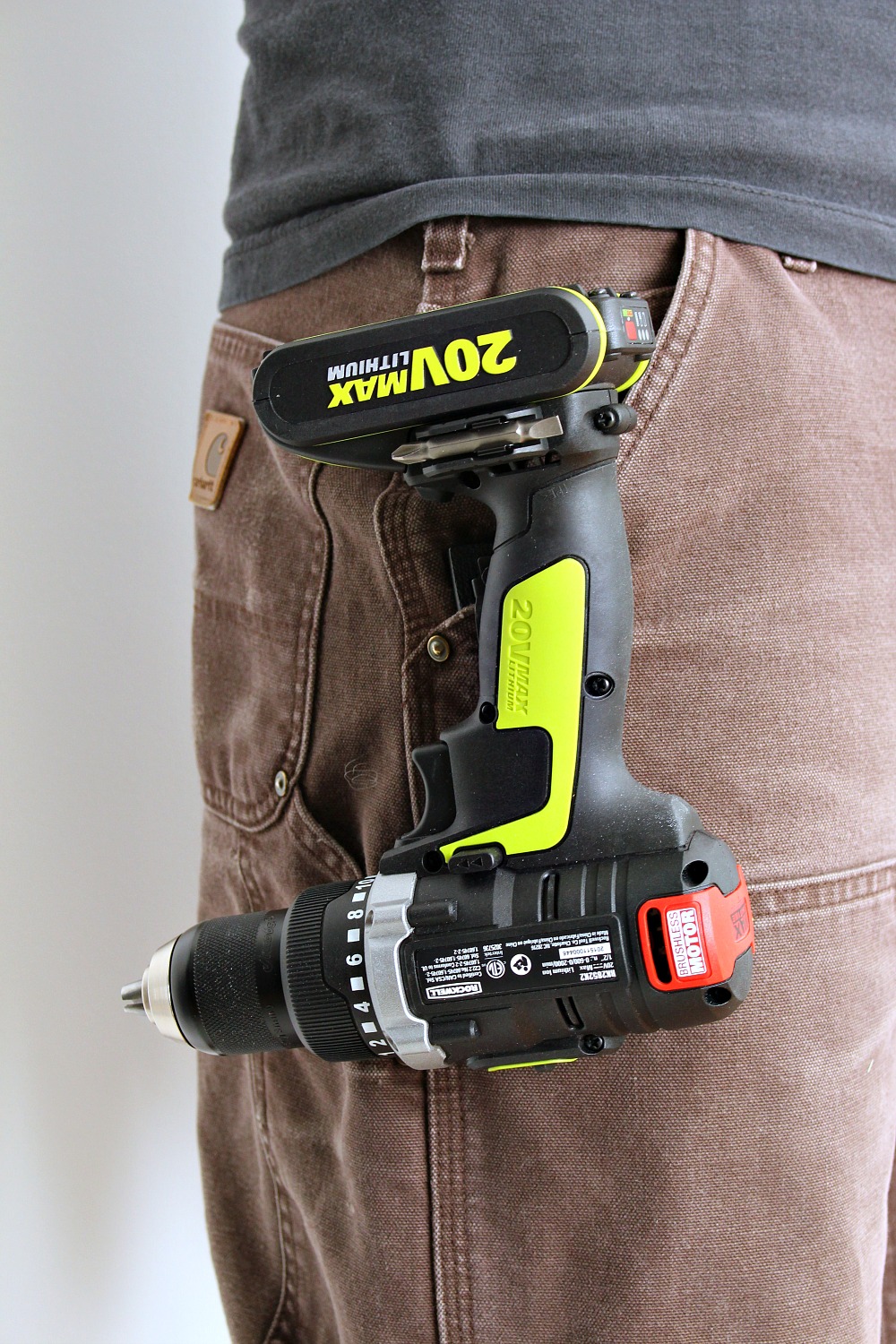 It was a good choice because we gave our new drill a spin during this project and there were some great features that helped make the task easier, like a comfier rubber grip (major plus) and a light, which helped us a lot because we were working in a dark corner of the bathroom. 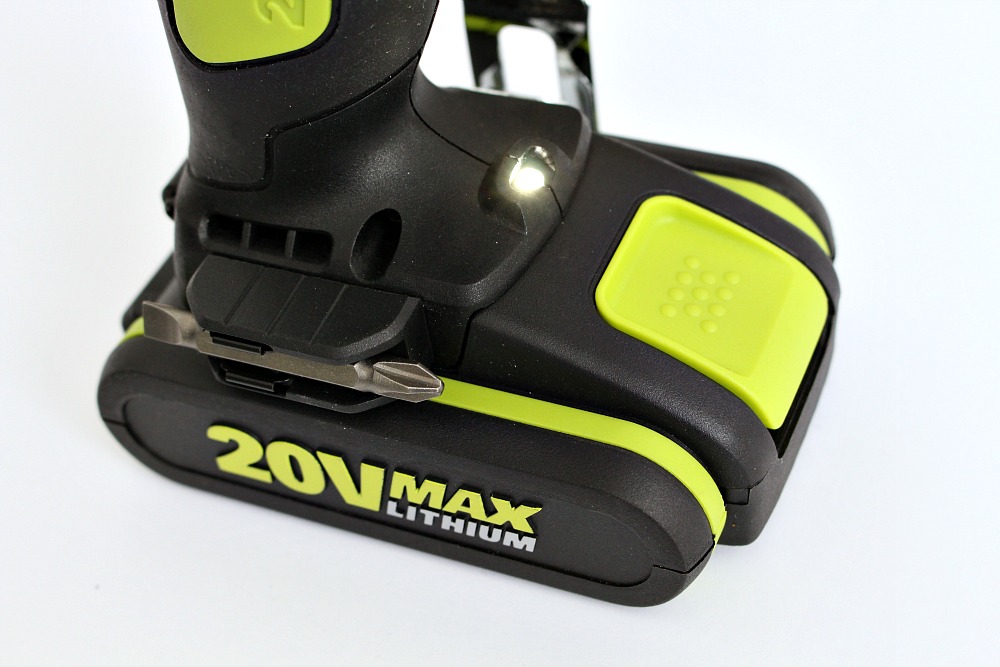 The shorter length made it easier to use in cramped quarters and the two-speed drive was just what we needed for drilling tile.  The handle is closer to the axis (the line of the drill bit), which makes it easier to put even, linear pressure on the drill when drilling – ie. downward pressure.  For future projects, like driving screws into drywall, the adjustable clutch is a plus (and something our corded drill didn’t have), because an adjustable clutch stops the drill from over-driving screws.  The battery level indicator is nice so we don’t run out of juice, mid-task. 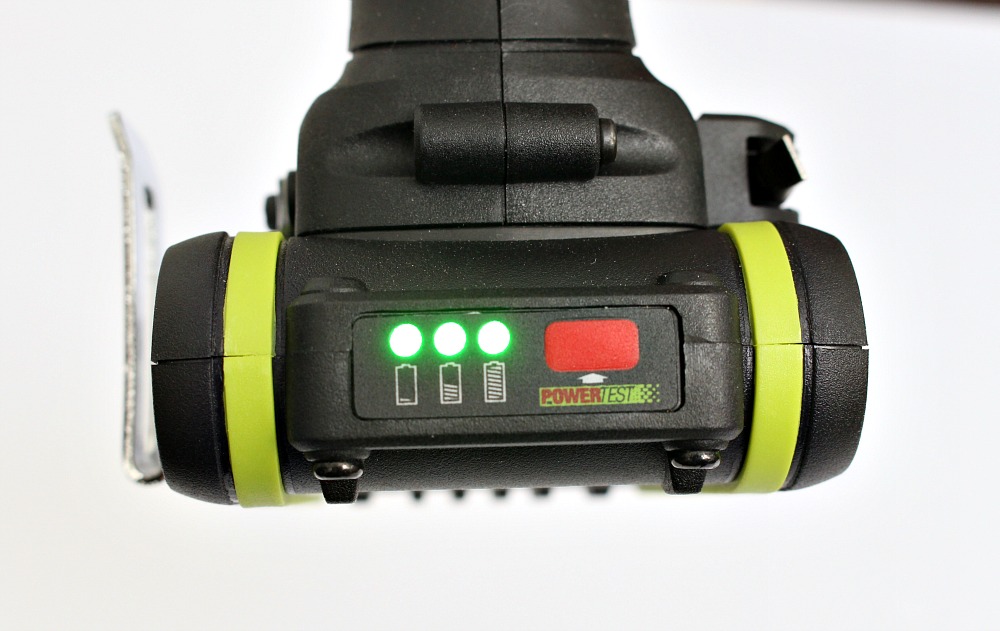 I’m so excited because the stone counter tops and aqua sinks are getting installed today! 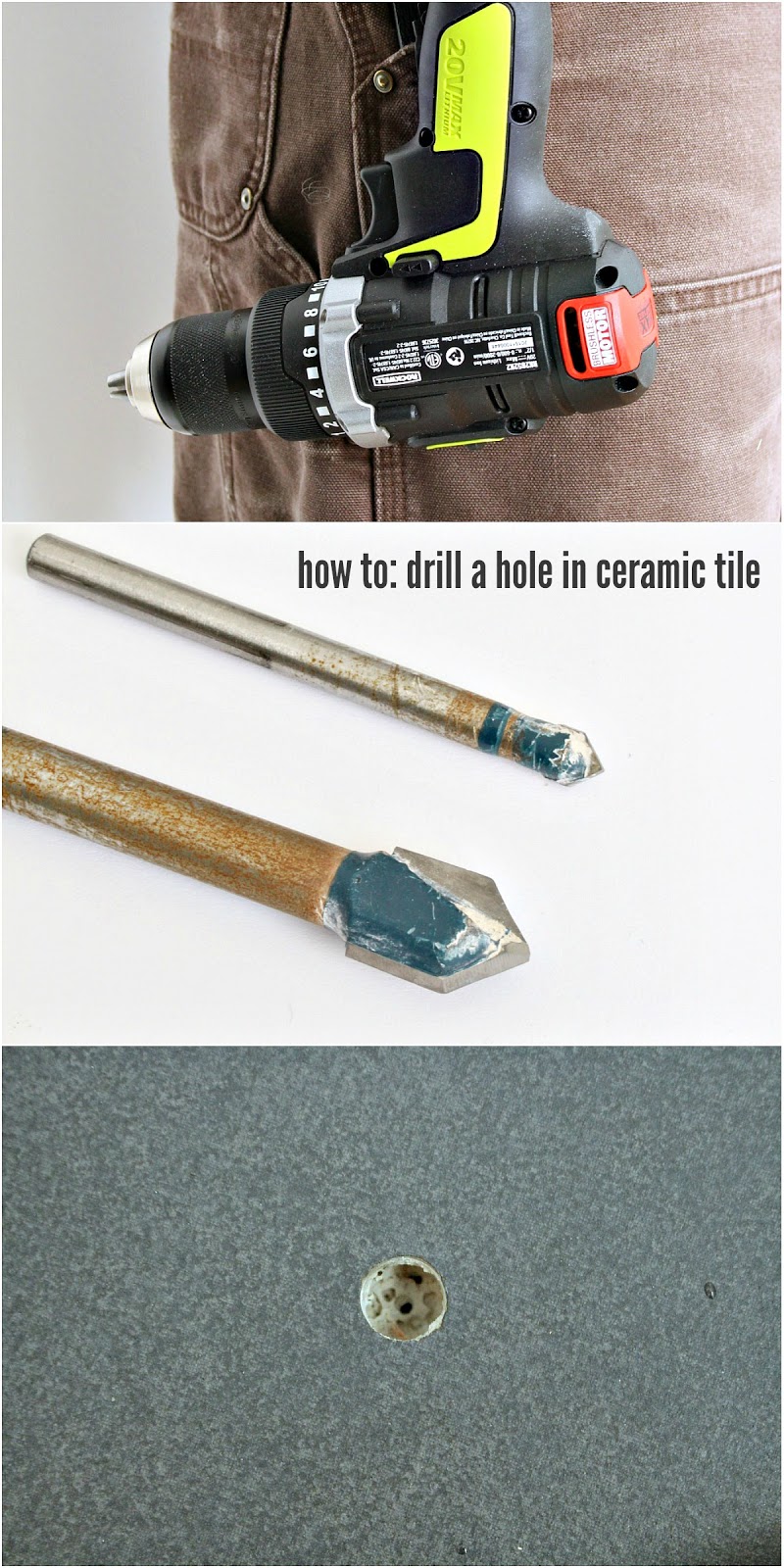 Now you’re all prepped and know how to drill a hole in ceramic tile so you won’t be afraid of this job like we were!