Let’s chat about my new towel warmer, which is something I never thought I’d own!  Although I have spent my entire life living in modestly sized spaces, with each subsequent move I’ve found myself in possession of an increasingly spacious bathroom…

My childhood home:  A bathroom so small, that you can rest your head on the sink and wash your feet in the tub while you sit on the toilet (for the record, I’ve never done this but I know it’s possible).  It is the tiniest bathroom imaginable – my Mom is planning to renovate, but she has to be careful about what toilet she buys because some of the newer models are literally too long.  In addition to the small size, my parents only installed an outlet in there after I moved out, so it was pretty brutal getting ready in the mornings when I lived at home.  I was so routinely late for a morning philosophy class that the professor got in the habit of opening the door for me 10 minutes after class started, with such impeccable timing that I’d reach for the knob and the door would open, as if by magic (as an adult, I am now deeply embarrassed by this, but still fully committed to blaming that minuscule bathroom).

My first apartment:  An absolutely HUGE bathroom because the toilet was between the sink and shower.  To me, it was insane.  Mind, blown.  If we squeezed in, Hubby and I could actually stand in the bathroom at the same time.

My first house:  Room for a VANITY.  With drawers!!  A whole gaggle of people could fit in there while it was being tiled.  At one point one of the tilers dismissively referred to the bathroom as small and I scoffed, “uh, excuse you, this is NOT small; this is huge because there are four of chatting in here right now.”

This lakehouse:  Insanely large.  We now have two sinks and a linen tower.  And there’s room for hampers IN the bathroom – two of them!  In the bathroom!!  I could totally host a cocktail party in here.

I have finally made it in this world: I have a large bathroom.

Now that we have a bathroom clearly fit for royalty, we decided to add a little more luxury.  Heated floors don’t really thrill us, but we decided that a towel warmer would be just dreamy on cold winter nights.

I started looking for the perfect towel warmer a little late in the game and was quickly overwhelmed – and disappointed!  So many shops only had tiny photos in catalogs and, for some weird reason, towel warmers are a special order in this city (where it’s cold all the time) and we were getting ready to drywall so I needed to find a towel warmer quickly.  It was a frustrating shopping experience, so I expanded my search online and quickly found a shop with tons of inventory and a really great selection – appropriately named Only Towel Warmers.  I reached out to them about partnering with me for our bathroom makeover and the owner was generous enough to send a towel warmer for review. 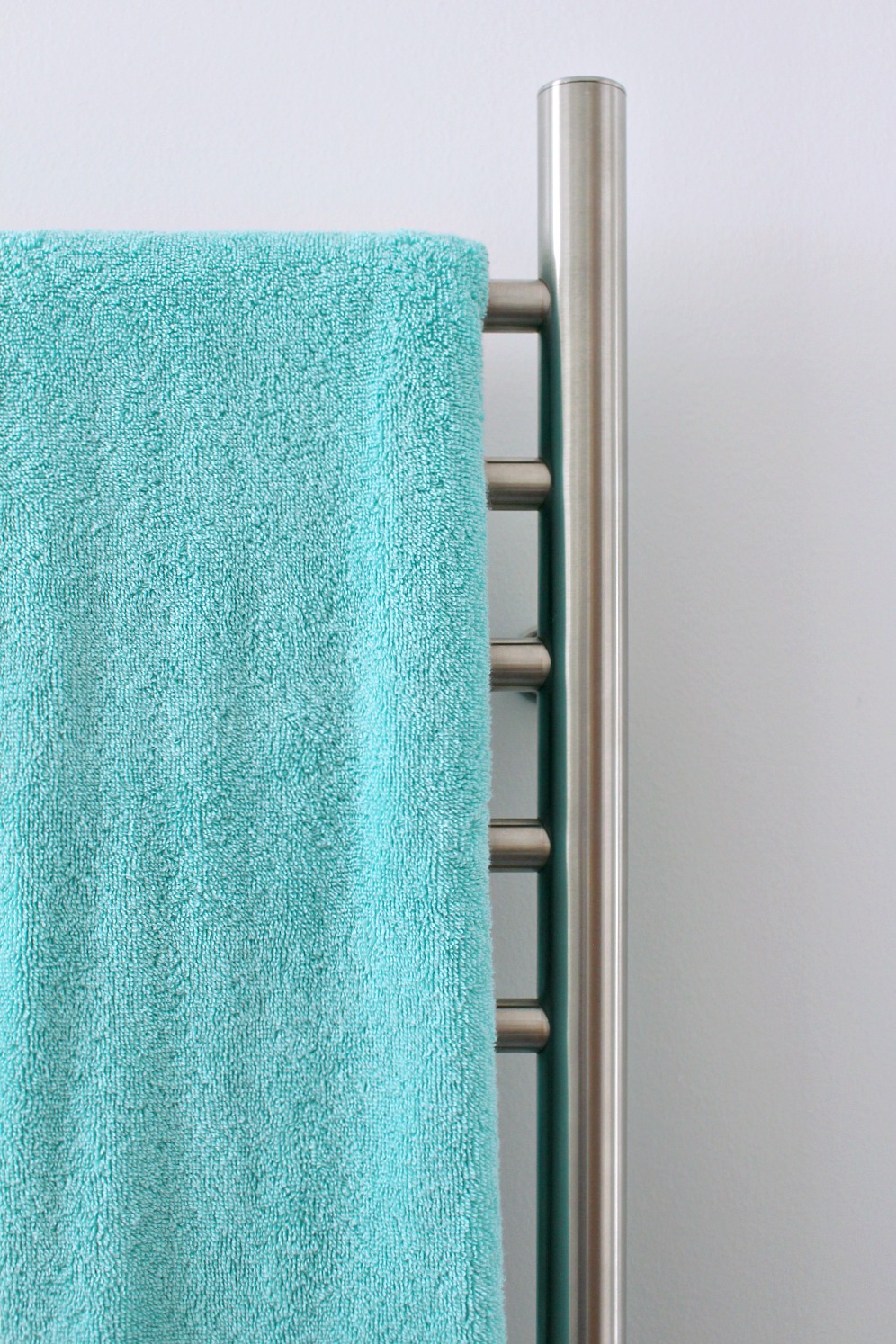 I chose a modestly priced model – the Amba Radiant Straight Hardwired Wall Mounted Towel Warmer –  because that’s what we would have purchased ourselves.  It was $330 at the time, but now it’s reduced to $264.95 – which is such a good deal!  This is also one of their best selling towel warmers, and I can see why: it’s stylish and contemporary, with a perfect size for a small space and a reasonable price tag to match! 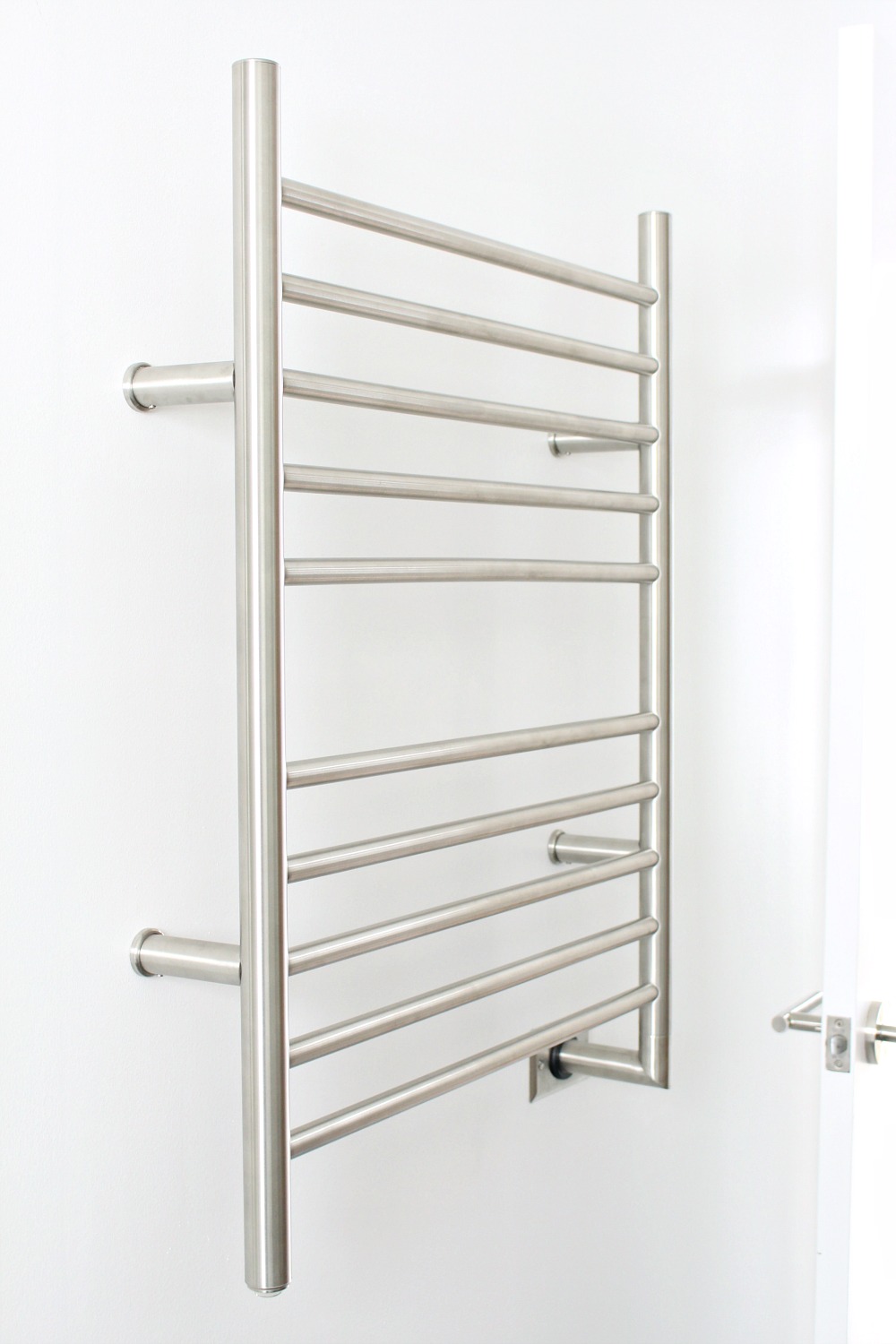 Things to Consider When Shopping for a Towel Warmer:

There were some criteria we had in mind while shopping for a towel warmer, which I thought I would share for anyone else who might be earmarking towel warmers for a bathroom reno or update.  These are the questions we asked ourselves:

Wall mounted or hard wired?
We don’t have a lot of floor space in our bathroom, so wall mounted was definitely the better fit for us.  Easy!

Style & finish?
Wow.  There are so many different styles available – there is literally something for everyone, but we had our hearts set on a modern, streamlined towel warmer that would look like it was part of the same Kohler Purist line our faucets and sconces belong to.  We also wanted brushed nickel (matchy-matchy!) and this model fit the bill!  The brushed nickel finish matches the Kohler fixtures perfectly and with similar styling, you’d never guess that it’s not part of the same line – which is exactly what I wanted.

Reading through the glowing reviews from Only Towel Warmers, it looks like the owner, Michael, has tracked down specific styles/finishes for customers – so I think that whatever you’re in the market for, he can find.  Seriously – some of them are designed so beautifully, you might not even know at first glance what it is, like the Amba Elory.  You can even get fun colors!  Or, if you can’t find the right look, you can design your own towel warmer!

Hang towels on hooks or drape on a bar?
Some of the towel warmers we considered have handy hooks, while others only have bars, so we could have found a model to suit whatever our preference is for hanging towels.  What I love about this model is that we can drape towels, robes, PJs, on the top of the vertical bars (makeshift hooks!) or drape them on the bars as designed.  It’s a versatile design, despite its small size.

How many towels will the towel warmer need to hold?
This was an easy answer for us, but for larger families or home with lots of guests, this is something to think about!  There are really large models available – and some clever, super long ones for compact bathrooms with lots of occupants.  We picked a style that had just enough room for two folded towels, side by side, and we mounted it high enough that we could still fit two generous clothes hampers below.

Size?
We didn’t realize towel warmers came in so many different widths and heights!   We paid particular attention to measurements, making sure not only that two towels could fit side by side, but that we were maximizing the wall space we devoted to the warmer.

Hardwired or plug-in?
Because we had walls open during the reno, hardwired was ideal for us, but I love that you can add a plug-in towel warmer to any bathroom without having to renovate!  My Dad has a plug in one in his damp, basement bathroom to help his towel dry in less than ideal conditions.

Is a timer necessary?
Ours came with an optional timer that has a schedule – so handy if you bathe or shower at the same time every day!  We don’t, so Hubby is thinking of replacing it with one that will count down but I don’t mind this model of timer at all.  It’s a handy to feature to add on.

Budget?
The price range for towel warmers really varies, but you can easily find one to fit almost every budget.  For modest bathroom renovations, it’s a nice treat if you couldn’t afford more luxurious updates like heated floors or stone counters.  It really does lend a spa-like quality to even the most humble bathroom!

Once we had these questions answered, it was easy to pick the best towel warmer – especially because Only Towel Warmers is set up so you can shop by brand, price, or sort by hardwired/plug-in.  Here are some helpful towel warmer shopping FAQs for anyone who might be shopping for a towel warmer in the future. 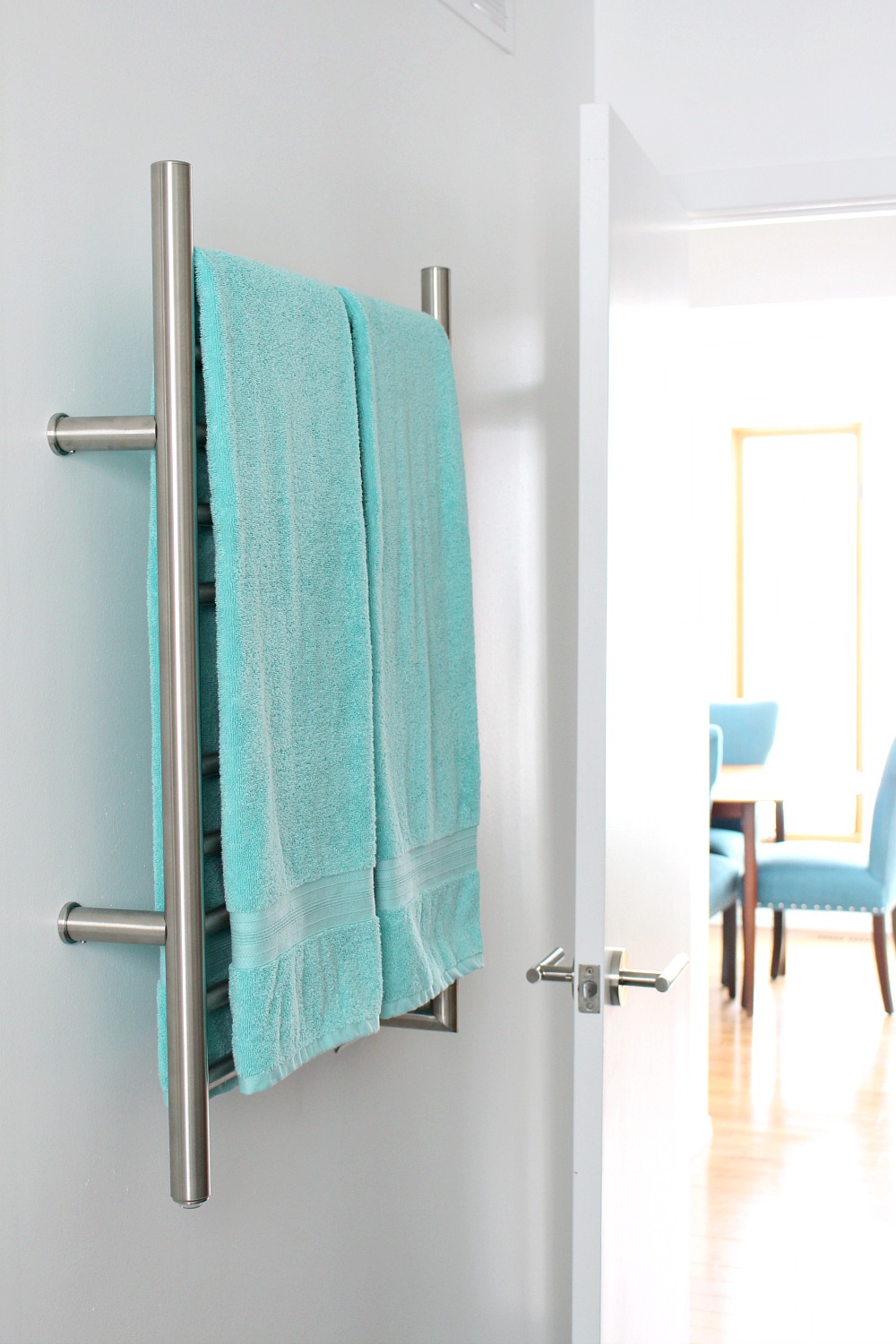 Why I Love a Towel Warmer in the Bathroom

I am so thrilled we decided to add a towel warmer to our bathroom plans!  It heats up quickly and it’s such a treat to dry off with a warm towel – especially on chilly nights.  I sometimes squeeze Hubby’s towel over and drape my pajamas on the towel warmer too.  The bathroom get pretty warm and steamy with the shower portal gone, but it’s still nice to dry off with a toasty towel!  Plus the towels dry much faster afterward, which is a plus!

It works so efficiently, I don’t even really need to weave the towels in and out – they get toasty no matter how they’re draped on the towel warmer, which is a relief because my enthusiasm for doing this waned after a week: 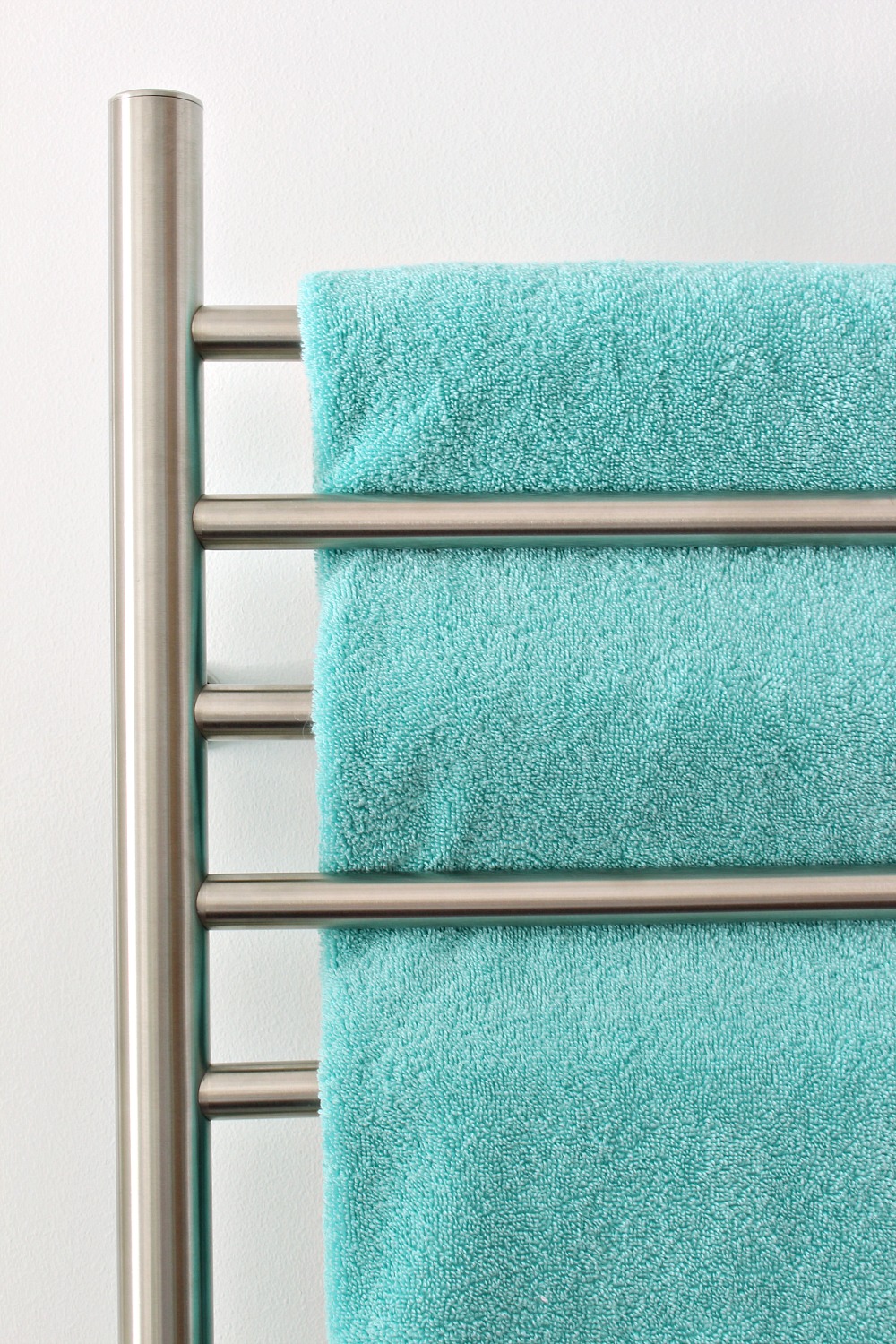 How to Install a Hardwired Towel Warmer

We were able to install our hardwired towel warmer really easily because we had walls open and wiring was being done anyway, so it’s an idea to flag if you have a bath reno on the horizon.  If you don’t, Only Towel Warmers sells a ton of plug-in models – even a plug in of this exact version.

Installation for us was fairly straight forward.  Because we had removed all the drywall it was easy to put wood cross pieces between the wall studs where the bar was going to be mounted.  Hubby loved this extra security for install!  If you don’t do this step, don’t worry, because you can just drill holes and use anchors in the drywall.  Hubby also installed the electrical box and ran the wires straight down to the basement at this time (our basement is unfinished, making access easy).  Once the drywall went up again, he simply installed the bar and connected the wires as per the included instructions.  We worked together so I could hold the bar as he connected the wires on the bar to those in the wall.  It was super simple to install. 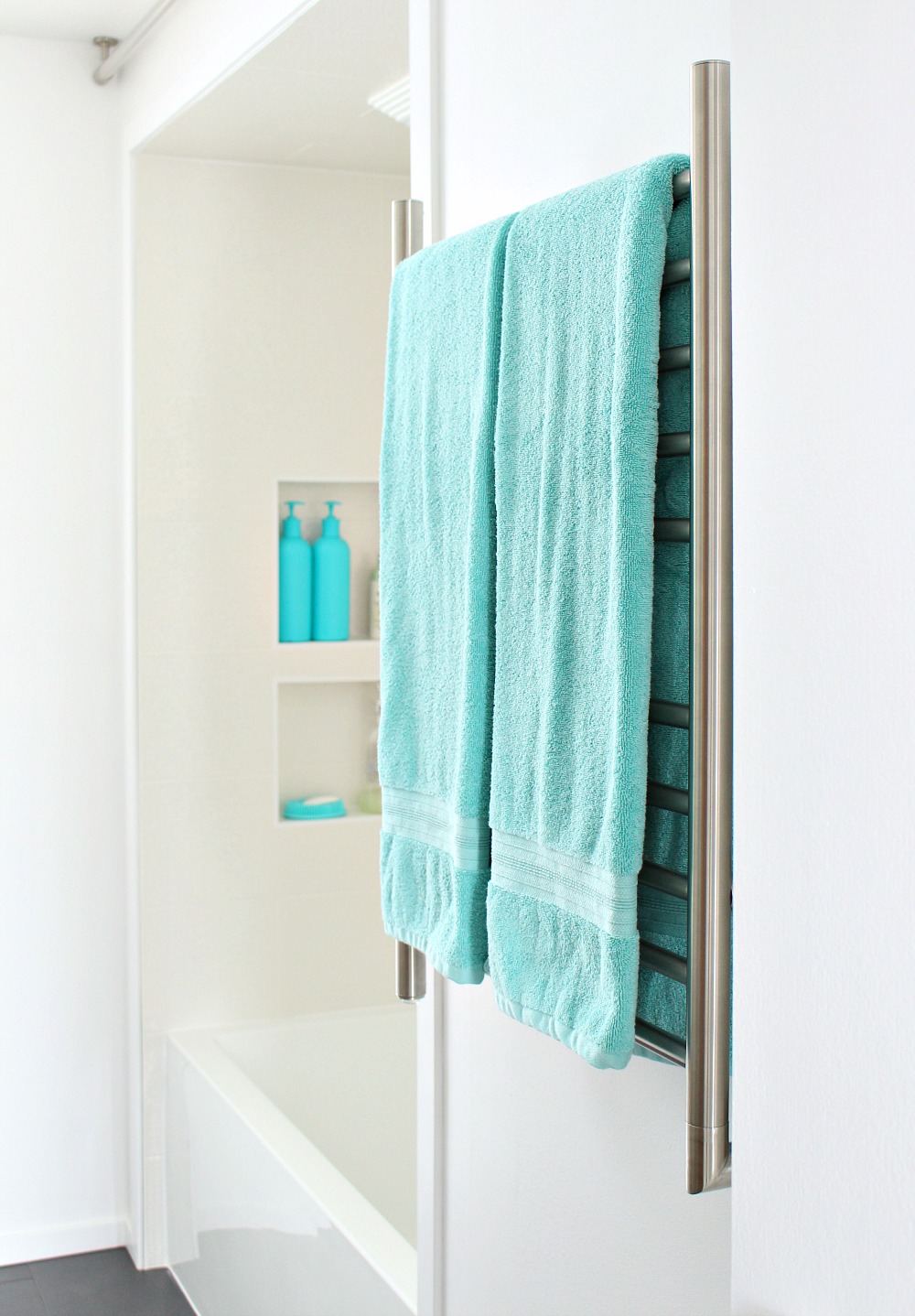 I am so enamored with this luxurious little touch!

Shopping with Only Towel Warmers was so straightforward and easy.  They have outstanding customer testimonials on their website and I can say from my experience, the customer service was top notch.  The company is a family-owned business, located in the States, and I’m honored to be able to partner with and promote family businesses when I can.

Disclosure: I was provided my towel warmer for review, but was not prompted, encouraged or ask to include any particular information in my review.  I’m completely happy with the product and the customer service, which seems to be the general consensus among customers.  If you’re shopping for a towel warmer, chat with the experts at Only Towel Warmers.  You won’t be disappointed, I promise!

P.S. My turquoise bath towels are from HomeSense but I tracked down some similar styles: