The last couple of weeks have been SO exciting because we’re finally buying a boat! 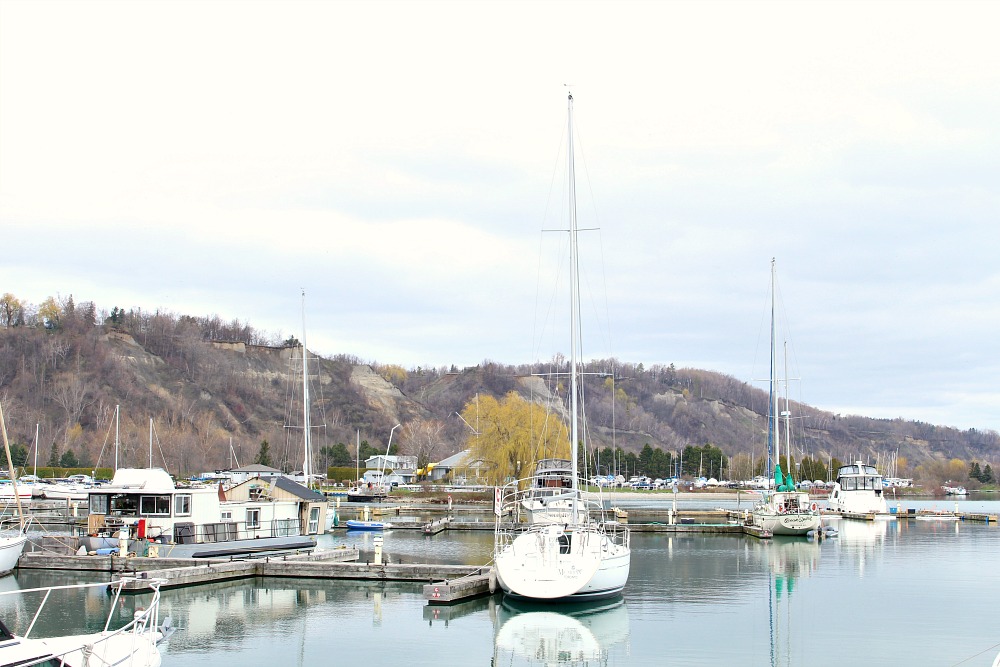 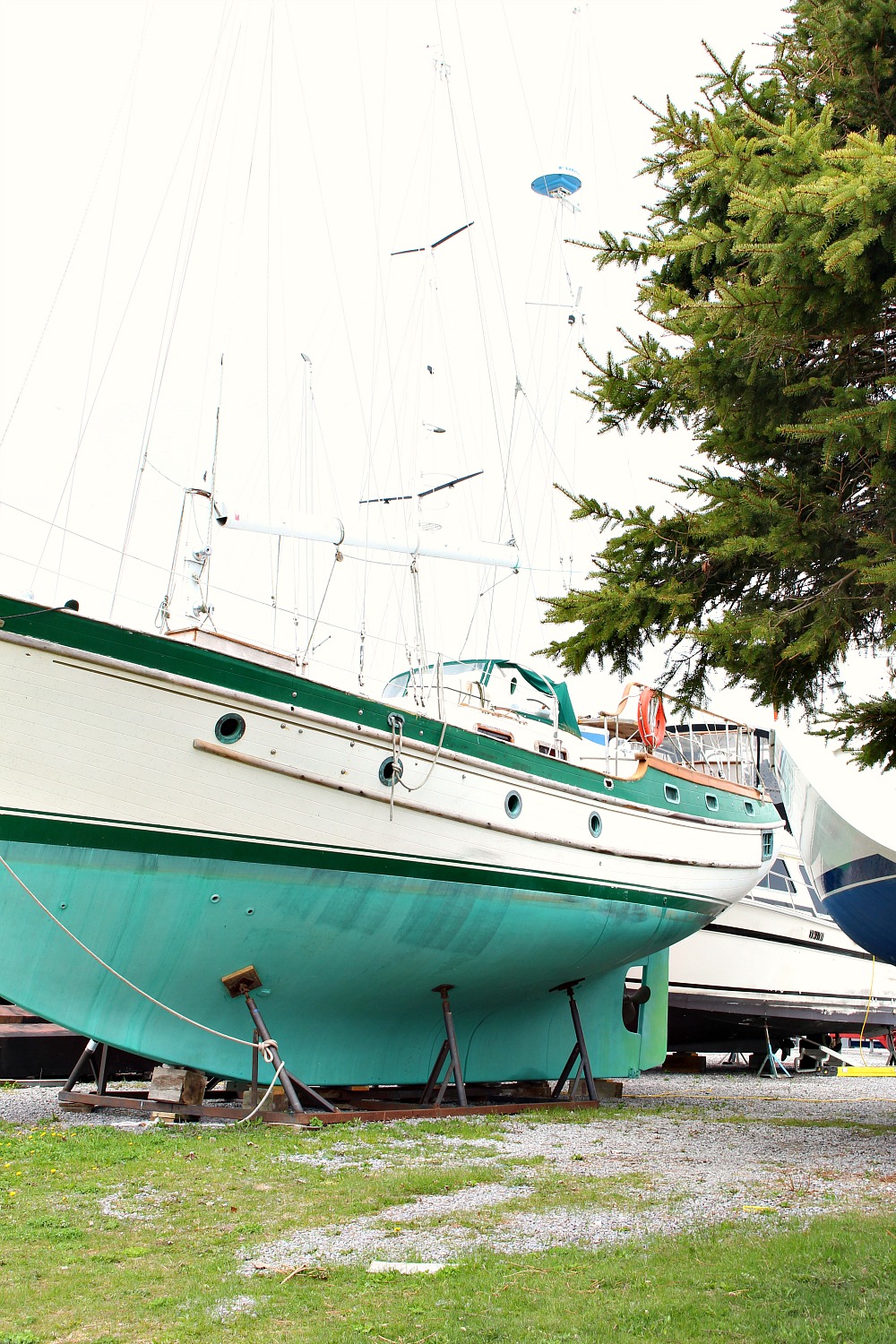 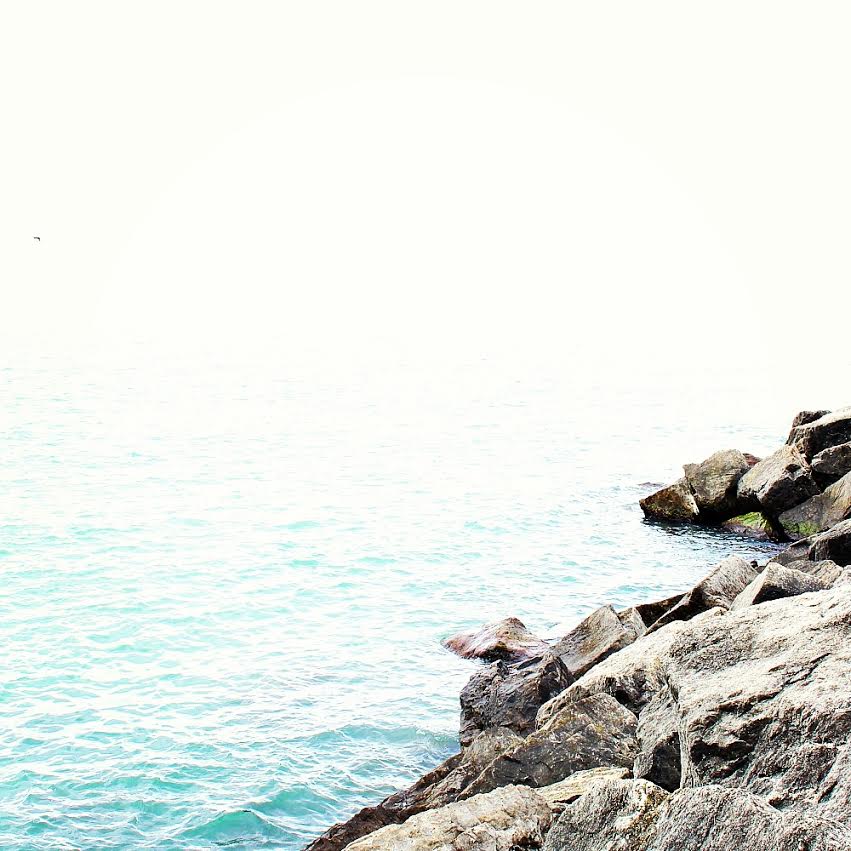 Since moving to the lakehouse, Hubby and I have wanted to buy a boat.  We love being on the water, whether we’re swimming, canoeing, or just goofing off in our inflatable raft, which may or may not have been designed for children.  We even own a small Fireball sailboat (designed for racing), that we bought for $1000 in our early twenties, but after a hilariously disastrous river sailing catastrophe (which ended with a treacherous hike through the woods – never a good sign when the intended activity was sailing), we lost enthusiasm for sailing.  We really pined for a larger boat to take out onto Lake Superior so we can tool around the islands, go on little camping trips, travel around to different harbors in Canada and the States, and park at marinas for nights when there are fireworks and live music.  If I’m being honest, I just wanted take a boat into town for a grocery run because it would be funny and seems like the thing to do when you live on a lake!  While we feverishly saved for home improvements, though, buying a boat remained one of those “someday” things – until my family’s tragedy last May.

What happened sparked a desire in me to make some changes and to be really honest with myself about what I wanted in life and what was important to me.  Hubby and I talked a lot about plans for the future and, while we’re still figuring things out, some of our plans, ruminating, and dreams are coming to fruition – among them:  spending more time on the water (away from the internet, phone and TV), exploring Lake Superior.

So forget the responsible house stuff.  We’re buying a boat!

Originally we wanted a powerboat, largely because that’s what everyone on our bay has, but the cost of fuel (and the idea of consuming so much fuel, when we already drive a diesel-guzzling Ram 2500) made us a little nauseous.  Instead, we started warming up to sailboats again (we don’t learn).  We decided 30 feet was a nice size: not too big to handle and maneuver,
but plenty of room for sleeping, a little washroom, and a teeny kitchen.  Because new 30-foot sailboats can be expensive, we focused our search on older boats, from the 1960s-1980s.

Once we decided to take the plunge, we started looking online for available boats.  We found quite a few contenders in the Toronto area, so we contemplated a road trip there to do some boat shopping.  I wanted to buy a boat and sail it home, but Hubby decided that a month long sailing voyage over the Great Lakes was just too epic a journey for us – probably smart, given our sailing track record.  The cost of shipping a boat home, or having a trailer built so we could tow it, started to feel overwhelming and, frankly, neither of us was in the mood to travel to Toronto. 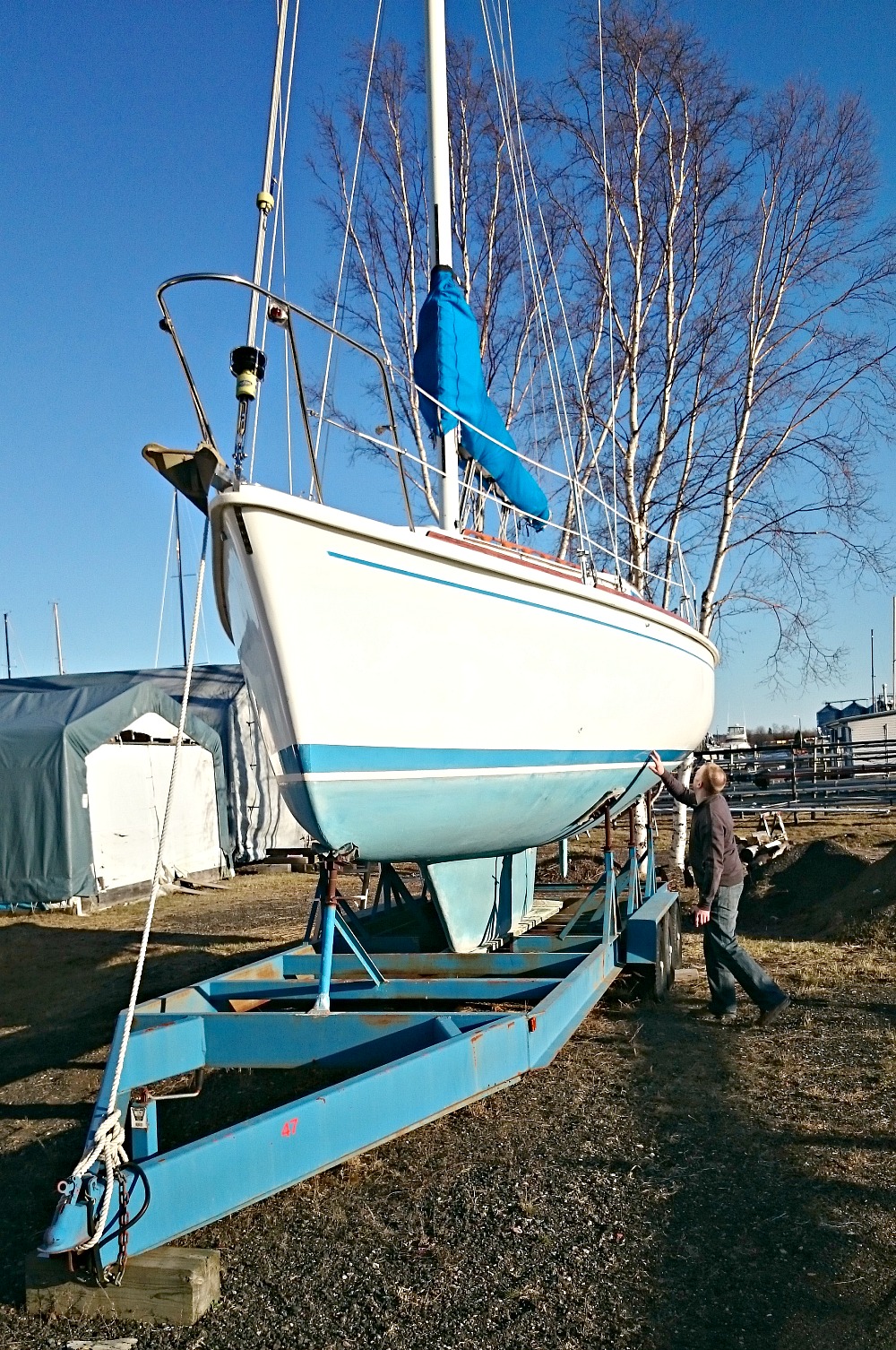 To save money we decided to buy a boat locally.  But we looked at the only two for sale that fit our criteria and were really disappointed!  The first needed a ton of work and the second was under a tarp when we viewed it, so it seemed so dark and dated – although the teak woodwork was impeccable.

Disappointed but undeterred, we set aside our concerns, hopped in the truck and headed to Toronto the next day.  The journey was really emotional for me, but I can’t avoid the city forever so in some ways it was good to go there, but have a distracting mission to focus on. 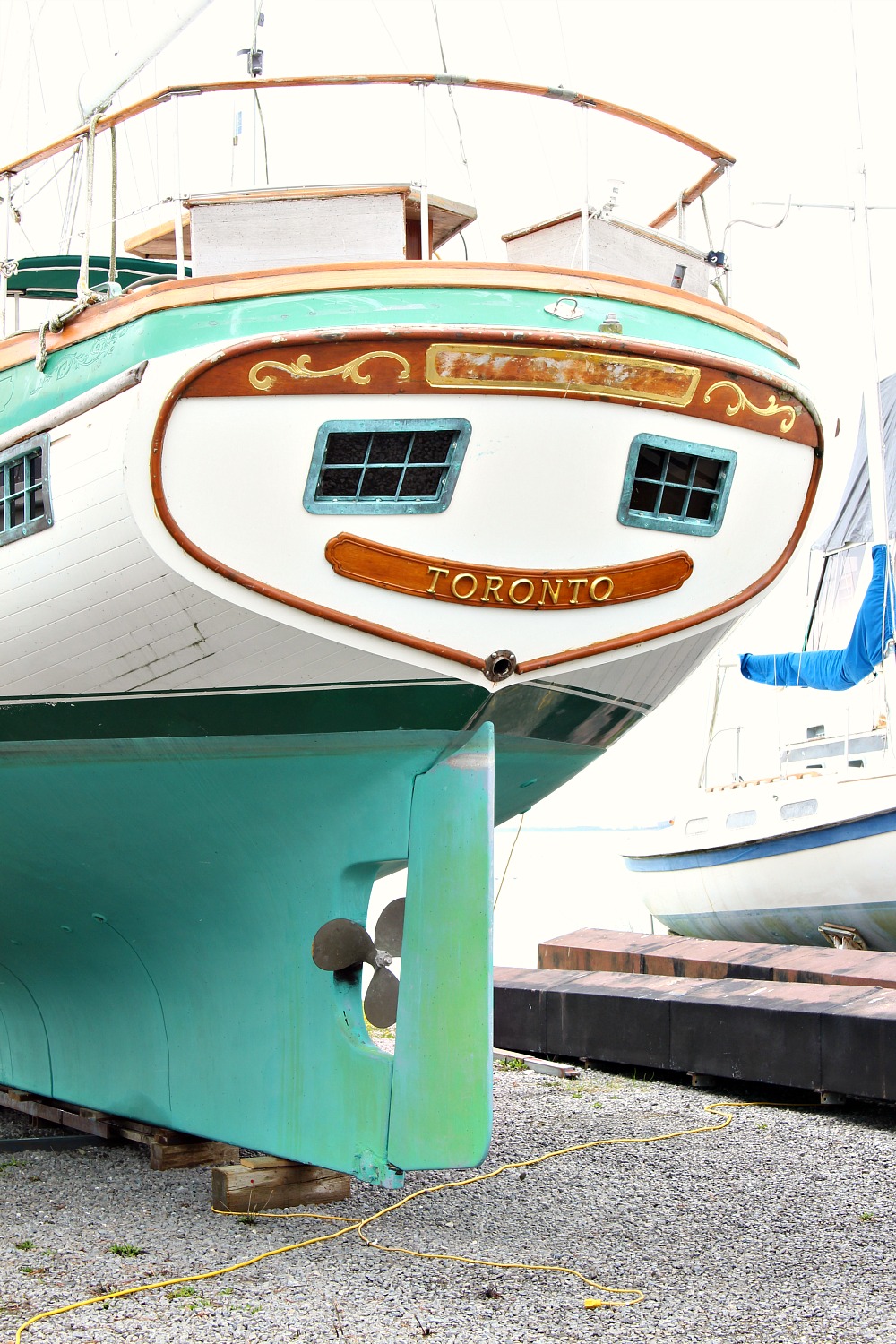 We made appointments with boat brokers and boat owners and saw as many boats as we could.  At first it was discouraging because my top contender, a 1960s Grampion with a tiny wood burning stove (photographed below), turned out to be a huge disappointment!  Almost all of the “woodwork” was faux wood-look melamine, plus it was so painfully tiny.  We quickly realized that a lot of boats photographed better than they looked in person. 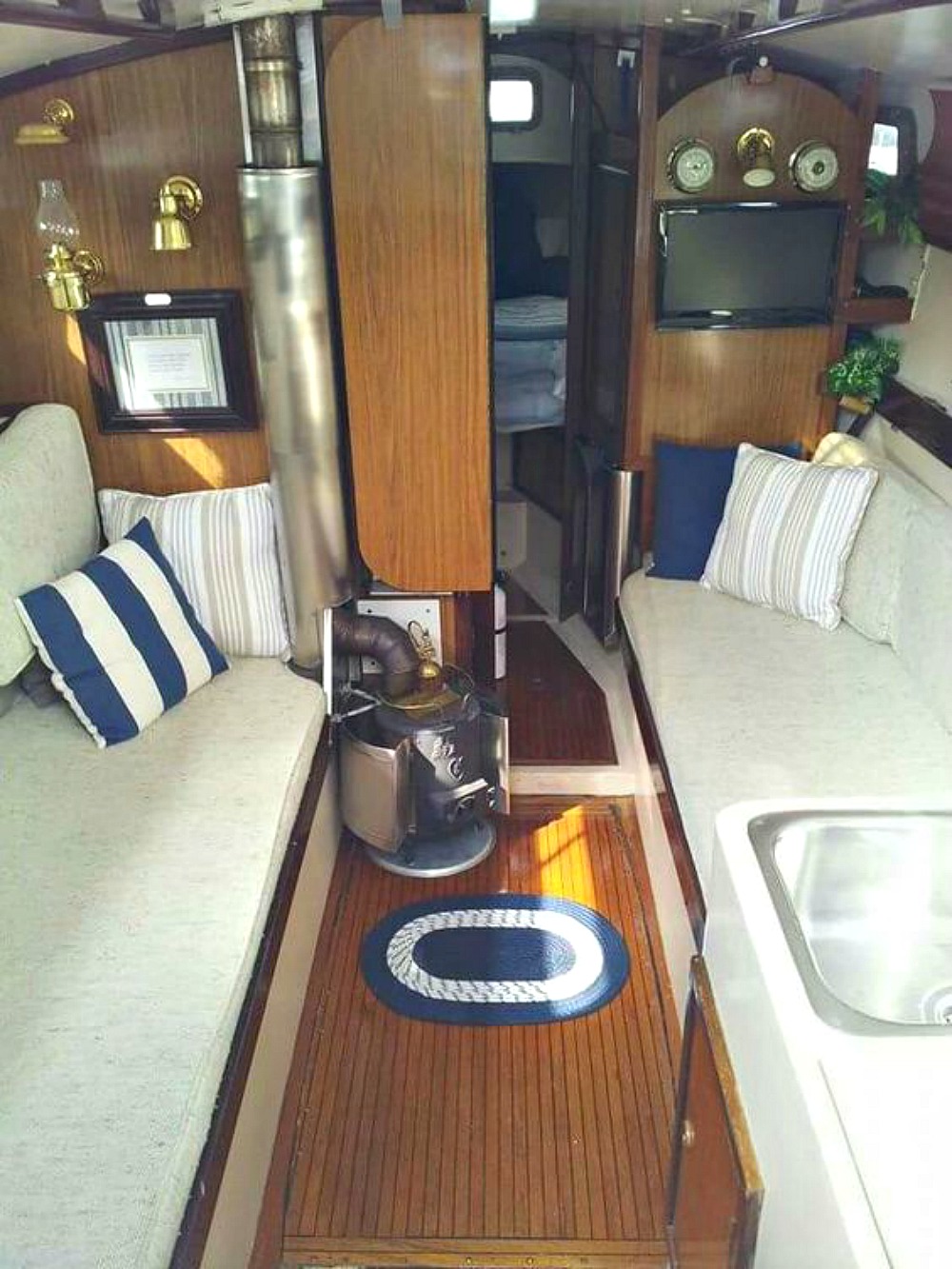 With each viewing though, we learned a TON and we narrowed down what we wanted: definitely no smaller than 30 feet, a beam (width) of at least 10 or 11 feet, a shallow draft to fit into our bay, a table that folds away completely for more room to move around…

Along the way, we drove to Sarnia where I fell in love with an incredible 35 foot “Finnsailer,” built in Finland by Fiskars in the 1970s!  It needed major work but it was SO cool.  Even Hubby, who originally called it “an ugly little thing,” fell hard after seeing it in person.  It was huge inside and had a pale aqua bathroom sink(!), tons of storage, lots of beautiful teak, and the cutest little retro stove.  It still had the original melamine plates and cups sold with the boat, with their own custom designed cubbies.  It was in rough shape, but had so much potential to be something really incredible.  There aren’t many of them in North America and I liked how unique it was.

Unfortunately, it was already under contract when we saw it, but I’m so glad we could tour it anyway!  My photos didn’t really turn out, but the one below shows the adorable stove (some Finnsailers came with bright orange stoves).  This video tour of a Finnsailer 35 is super thorough, if you’re curious about the boat of my dreams (although the boat in the video is missing it’s original stove).  I want to keep my eyes peeled and maybe someday, down the road, restore one of these gems to make my late Finnish Grandpa, who loved fishing on Lake Superior in sketchy boats, proud. 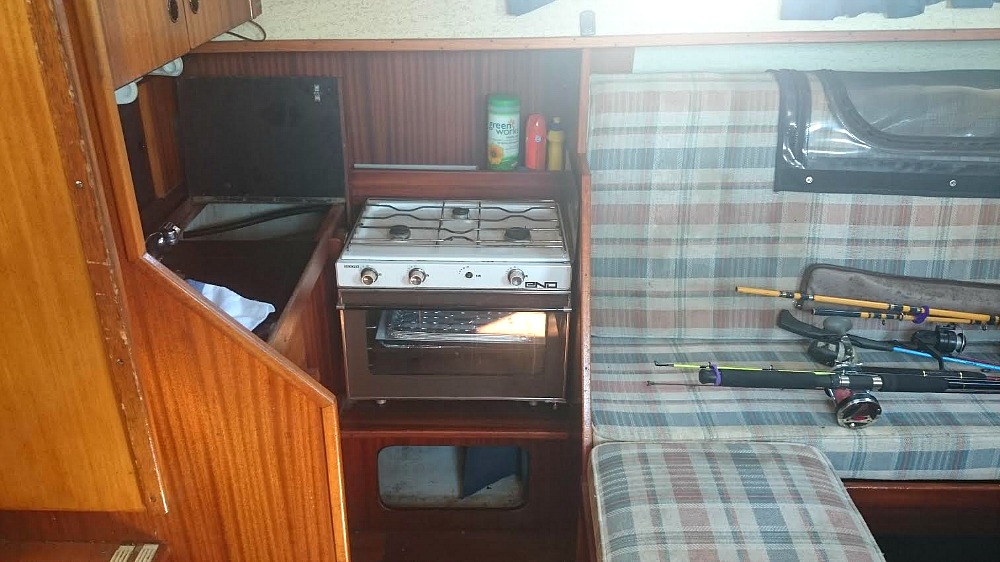 After touring a ton of boats, we narrowed it down to a specific kind of boat: a Ticon 30, which is – don’t laugh! – the second boat we’d seen locally, before we left for Toronto.  We viewed one in Toronto and saw what a Ticon 30 could look like restored.  We almost bought that one, until an inspection revealed major water damaged.  With that last disappointment, we ran out of time and Hubby had to get back to work.  Somewhat miffed, but feeling SO much more knowledgeable about boat-buying, we returned home empty-handed.

We decided to take a look at the Ticon 30 for sale in our city again.  And you know what?  It looked a lot better!  It needs some aesthetic work, to be sure, but it’s in great condition and has been maintained well.  We had a boat survey done last week and are just waiting on the results before completing the purchase.  Unless any major damage/problem is revealed, we’re taking the plunge and buying it!

4,000 kilometers, four hotels, countless boat marinas, a truck repair, and a flat tire later, we came full circle and committed to purchasing the second boat we saw, in our hometown.

On the bright side, we found every delicious, lakeside burger joint in Southern Ontario and stuffed our faces with juicy burgers and tasty sweet potato fries for a week!  We truly didn’t have much time for anything other than looking at boats and logging a too short visit with my Aunt and Uncle (and the kiddos), but we made time for some relaxing, lakeside meals together.  And Costco.  We always make time for Costco. 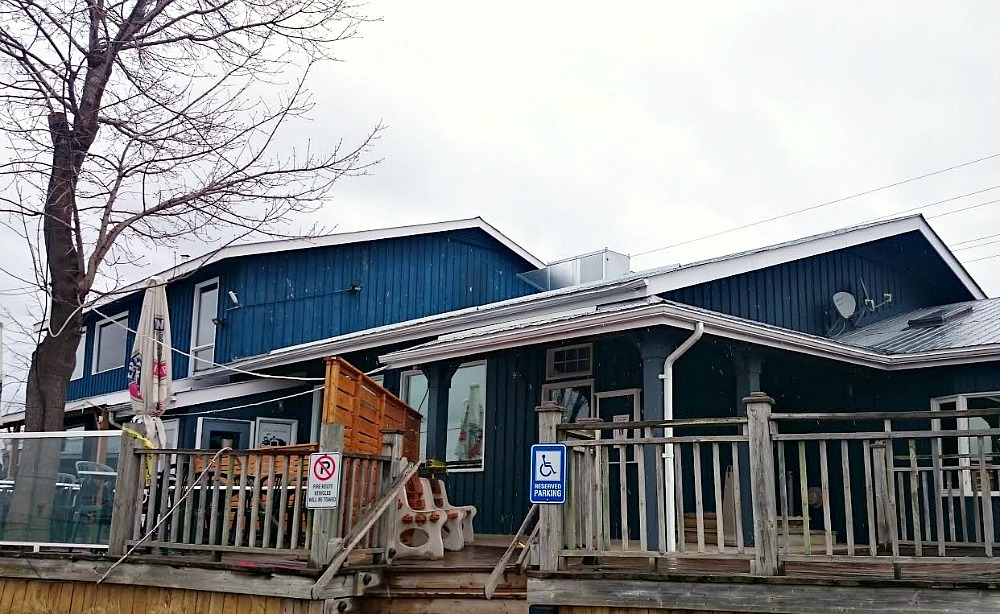 I bet that, at this point, you’re curious to see the boat we might be buying?  I didn’t take many photos of any boats we looked at because to access these boats we had to climb up incredibly tall, teetering ladders so I always left my purse – and camera! – in the car.  It never dawned on me that these boats wouldn’t be in the water, so I wasn’t quite prepared for the feats of strength.

I managed to snap a few photos of the Ticon 30 with my phone.  I love its wood floor and that incredible, teak drop-down table (so many of them had table bases bolted to the floor).

If the purchase goes through, I can rip off the tarp and share better quality photos, a peek at the (somewhat homely exterior), plus a whole tour – might be a good excuse for my first video tour!  I’m so excited about the prospect of decorating this boat – first up, new upholstery.

Fingers crossed it works out – if not, we’ll have to hit the road again…

UPDATE: We bought the boat!  Tour the before photos here and then check out the updated sailboat interior here.