This is such a great tutorial for anyone looking for a really budget-friendly way to repair and refinish laminate counters. 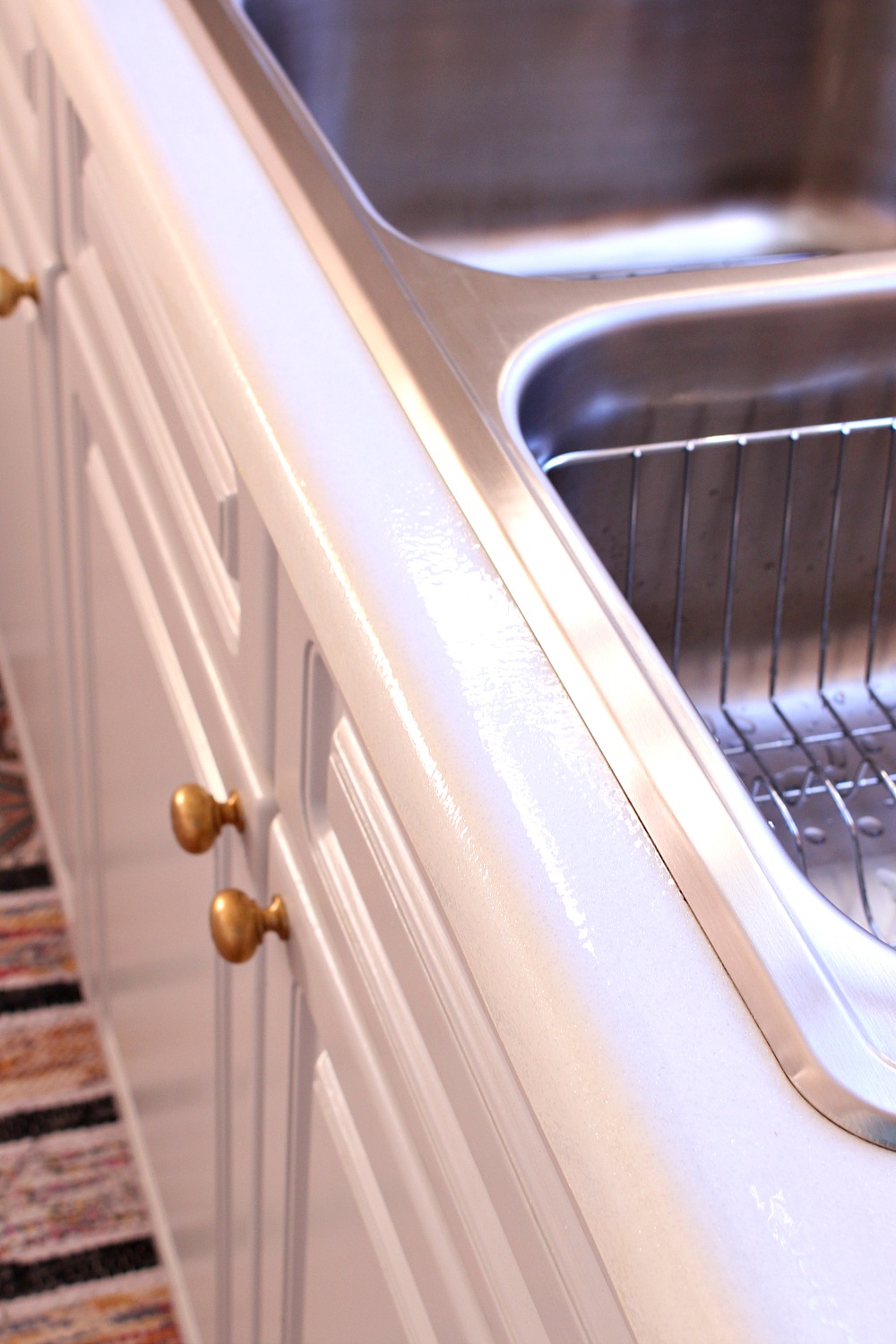 In my Mom’s budget-friendly kitchen makeover, it’s difficult to see just how much better the counters look now because her old counters were surprisingly photogenic.  They had a really pretty, subtle design, but over the years they had become stained, scratched, chipped, and were actually de-laminating from the MDF. 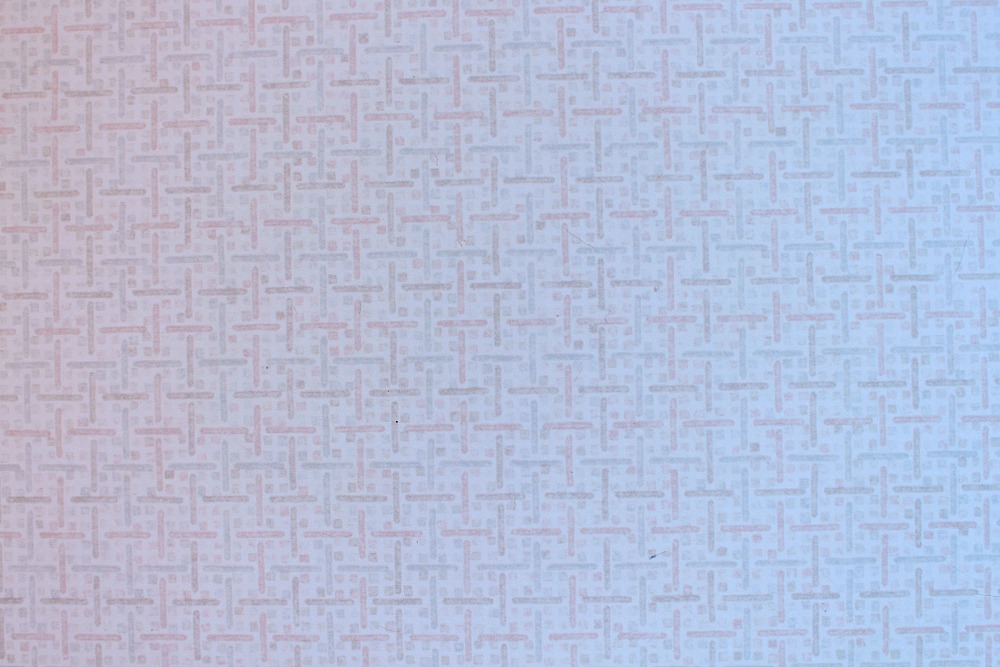 Mom didn’t want to replace them because this kitchen spruce is just temporary, so we used a Rust-Oleum Countertop Transformations kit to give them a new look.  There are different kinds: the faux granite kit, the “Fleck” kit and the “Mica” kit.  We opted for the Mica in White, which turned out to be so pretty!  It’s a subtle change in the photos, but in real life it really freshened up the space while still keeping the kitchen light and bright: 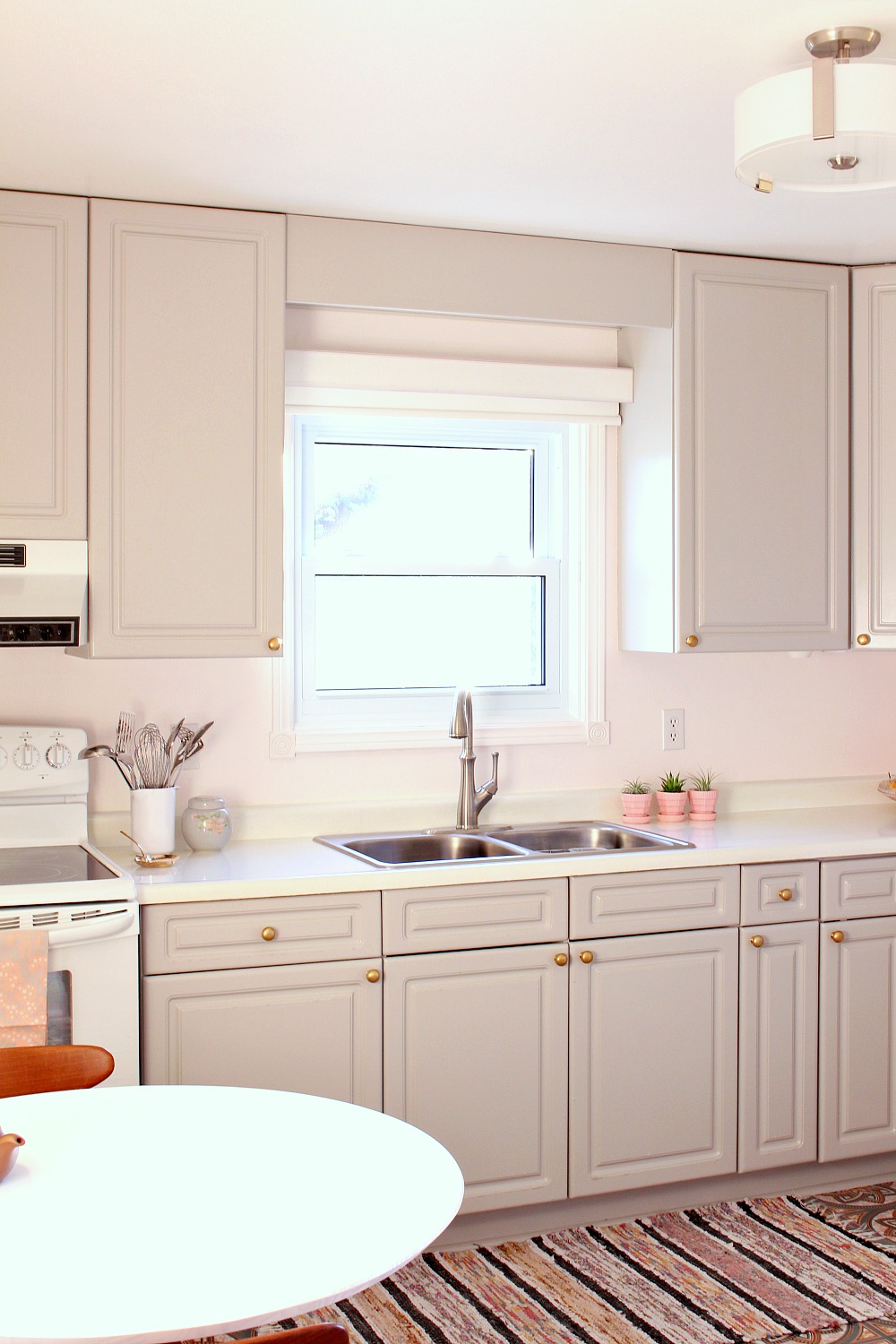 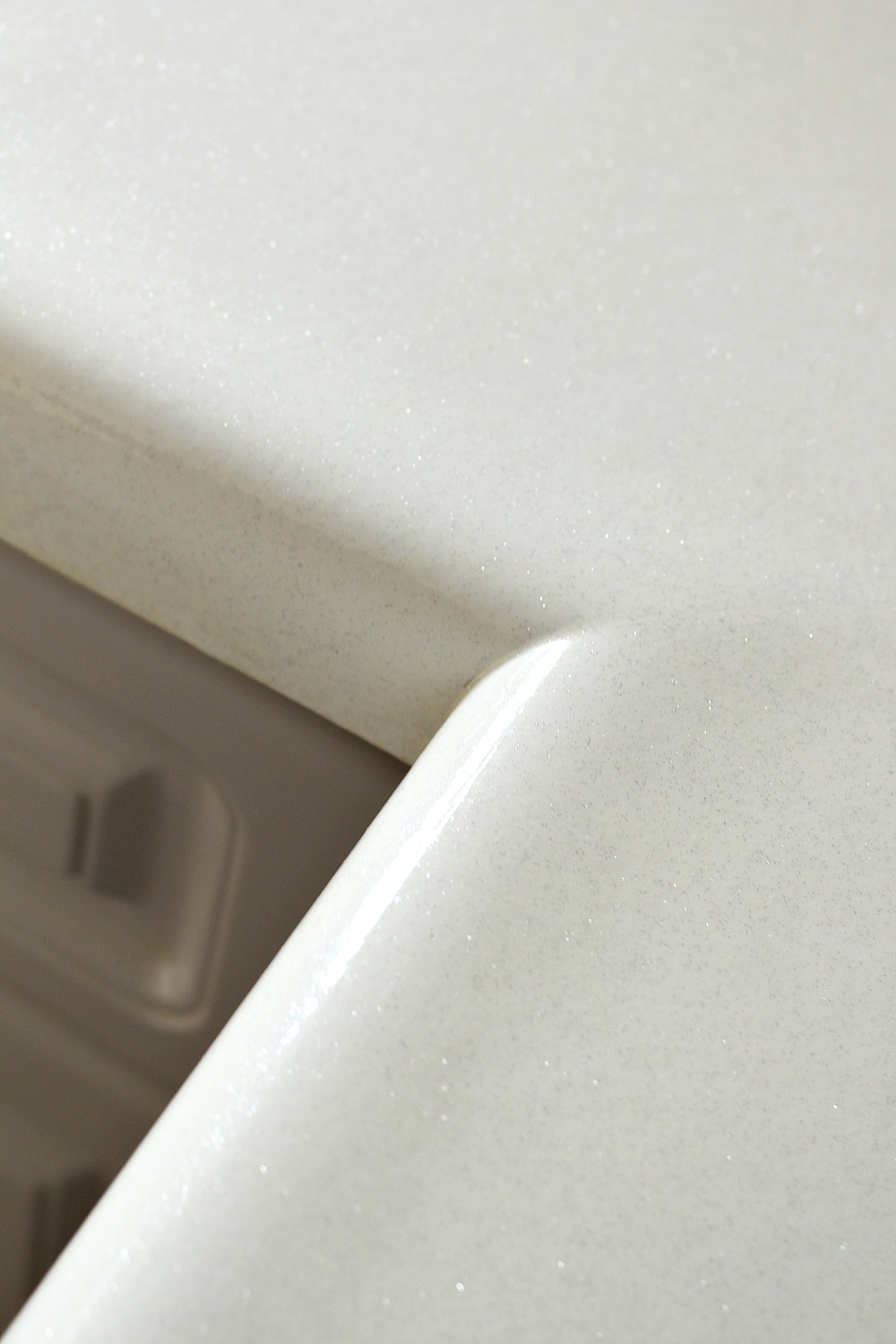 But before we refinished the laminate counters, we had to make some repairs first.  It turns out that it’s not that difficult to repair and refinish laminate counters!  Here’s what my Mom and I did to repair the chips, fix the peeling laminate, and ultimately re-coat the counters for a fresh new look.

How to Repair Laminate Counter That’s Lifting From the MDF:

Before we did anything, we needed to reattach the laminate to the MDF because it was lifting: 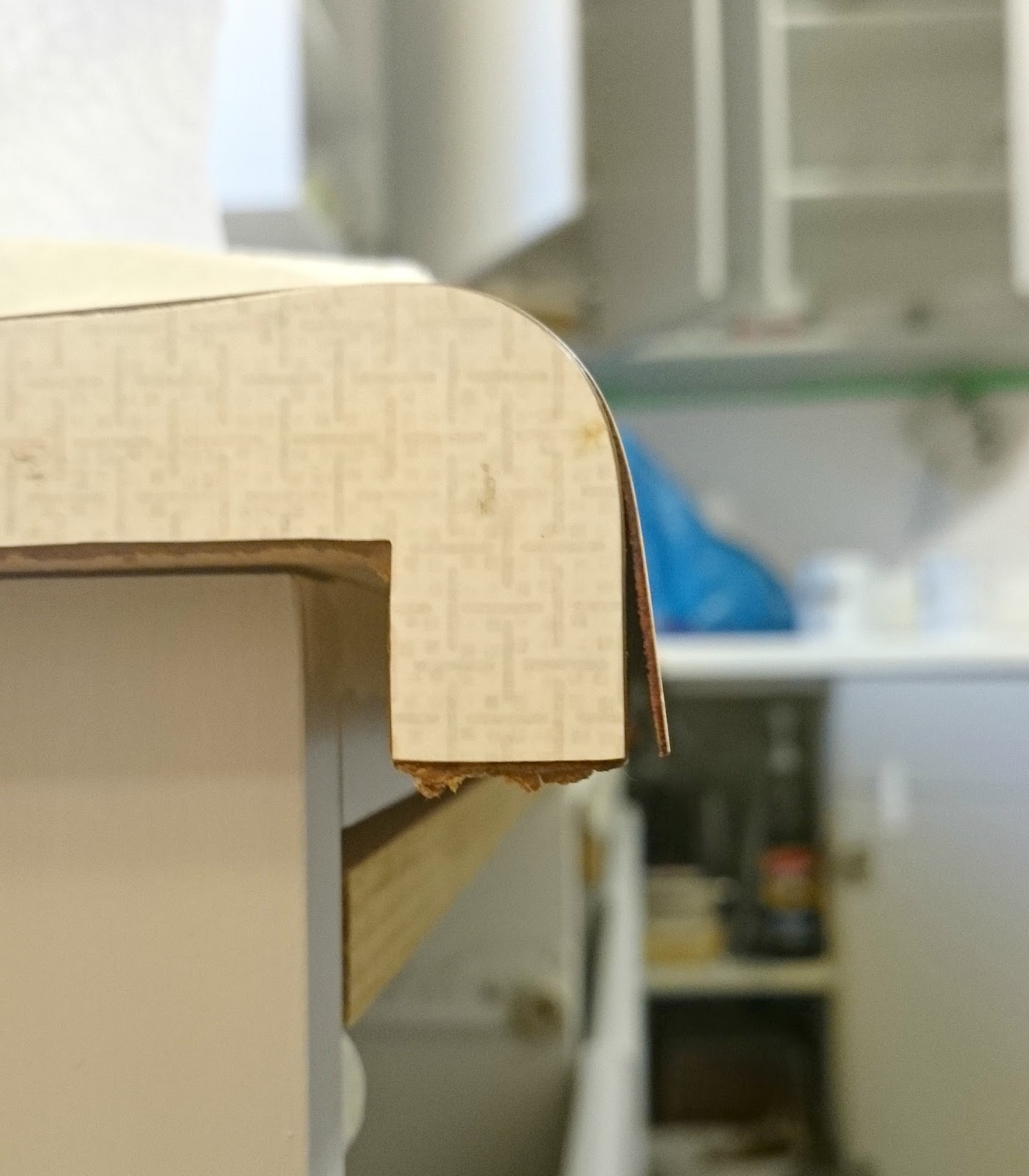 We squeezed in some construction adhesive and then, using a series of clamps, held the counter in place while the adhesive dried.  To avoid dents or a wavy edge, we used paint stir sticks beneath the clamps to hold down the entire counter edge evenly.  We did this way back in the early part of the summer, and it’s still holding strong! 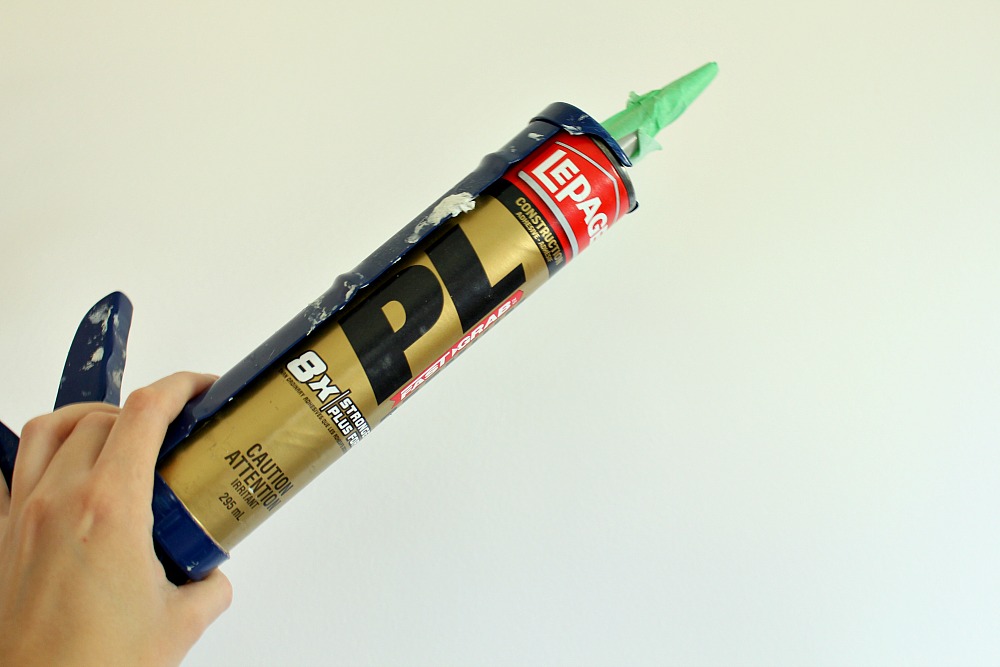 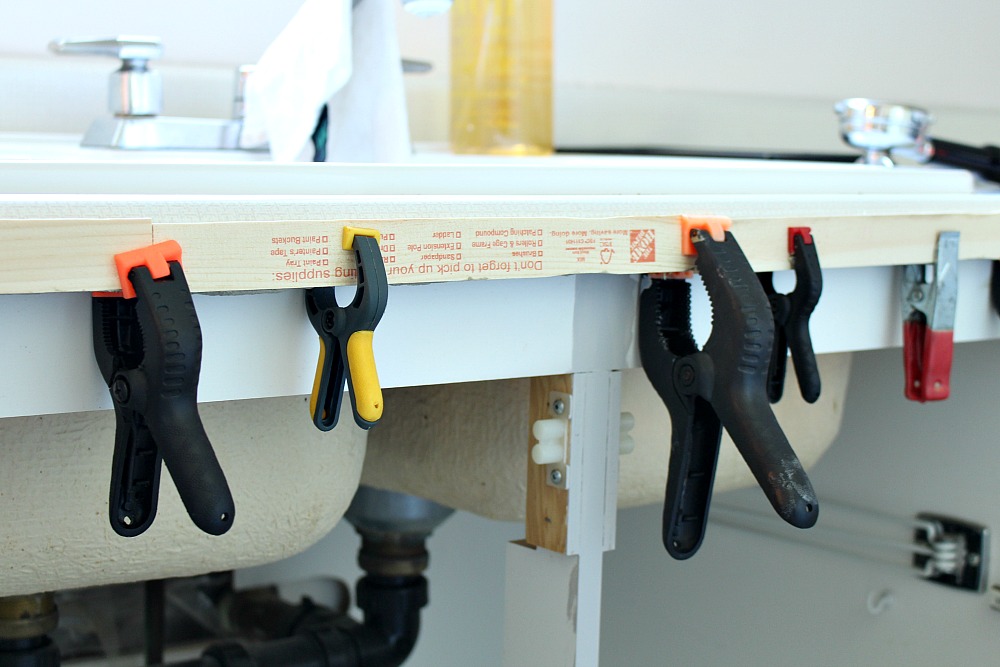 How to Repair Laminate Counter Chips:

The laminate counter had chipped in many place and I was partly to blame!  When I still lived at home, I leaned against the counter and the edge (which had been separating from the MDF) caught on the back pocket of my jeans and when I moved, I took a piece with me.  I may have done this more than once – my rear end was, apparently, the perfect height for this destruction.  Luckily Mom kept the pieces,which we glued back with construction adhesive.  For the lost chips, like the one below, I built up the chip with an adhesive putty. 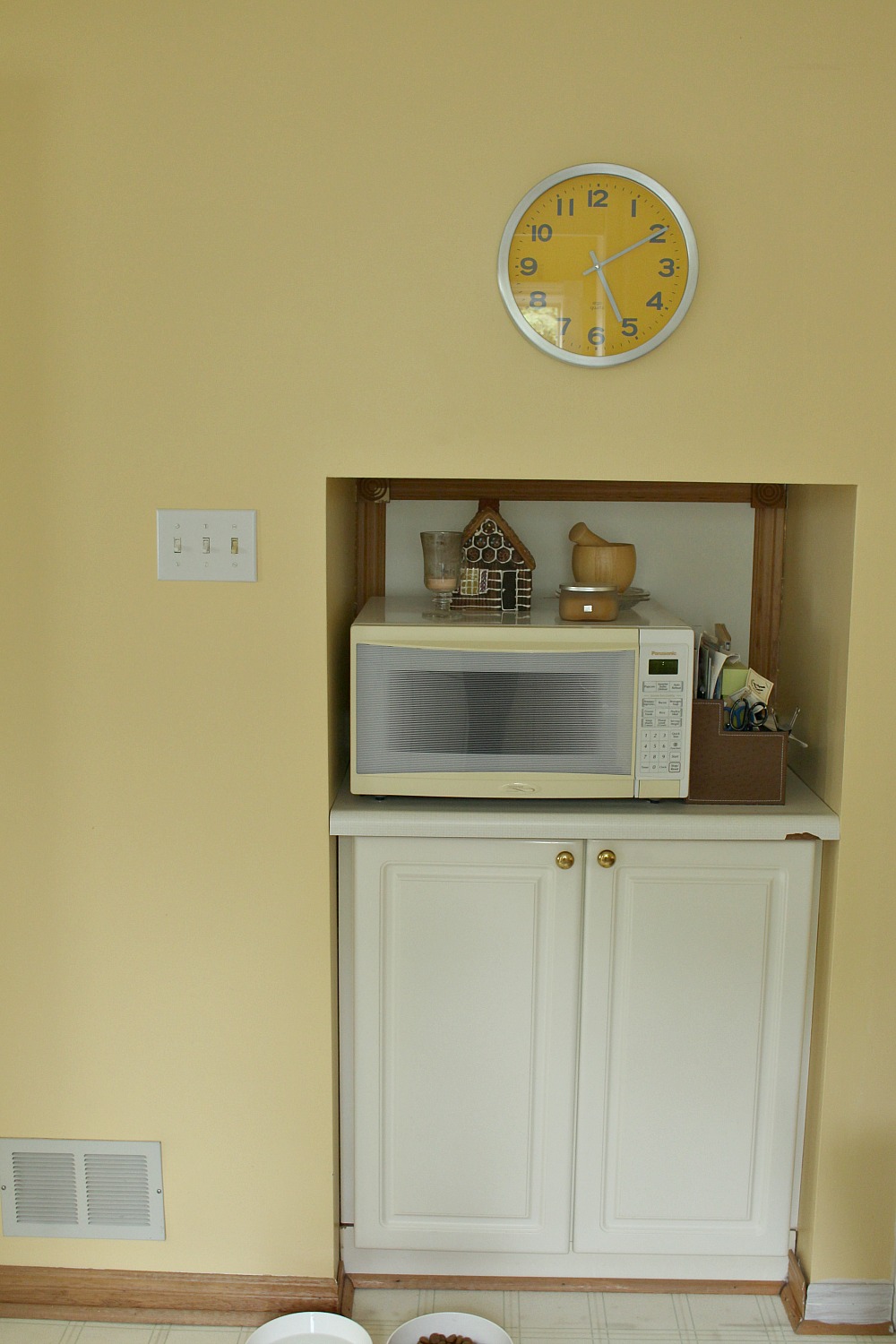 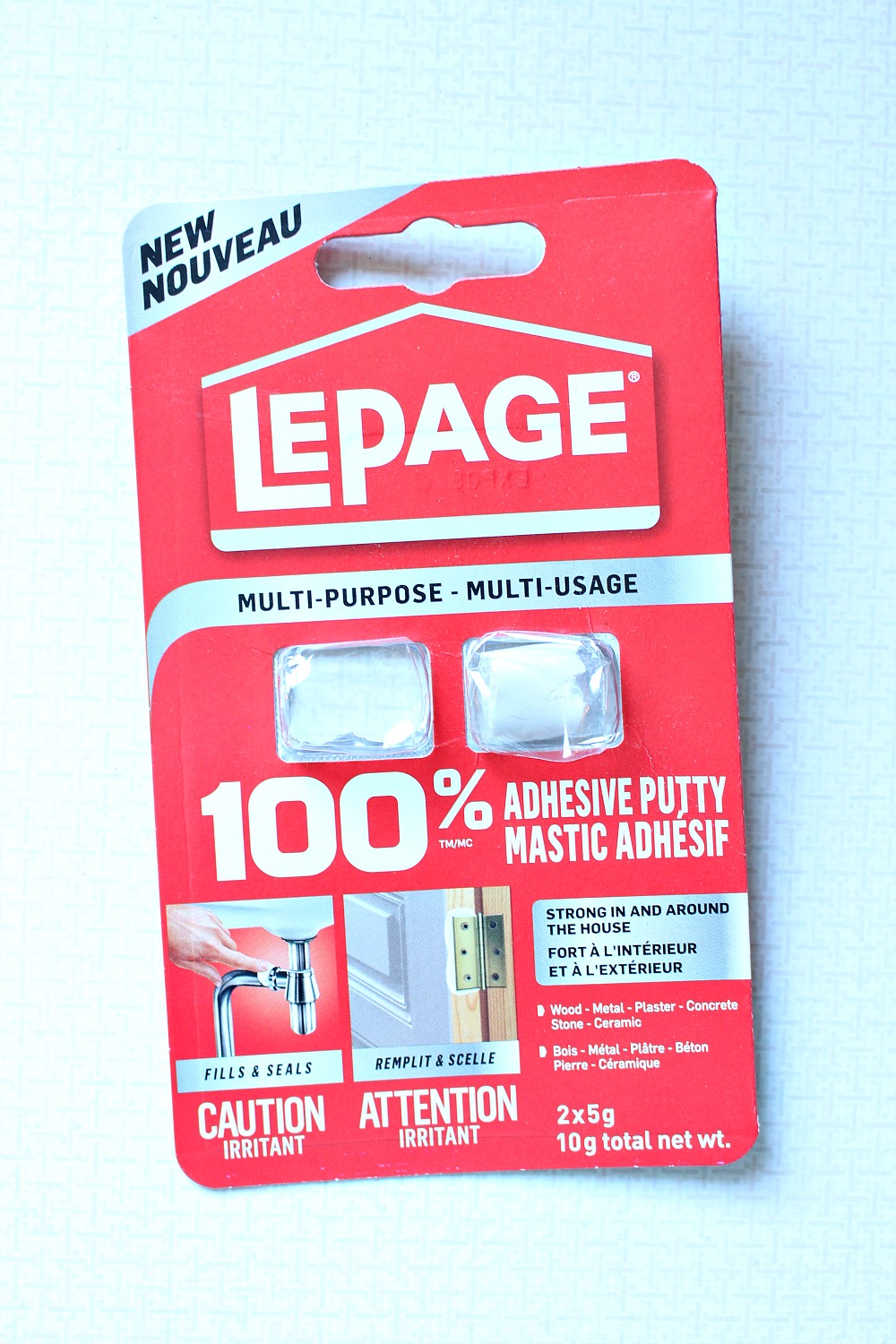 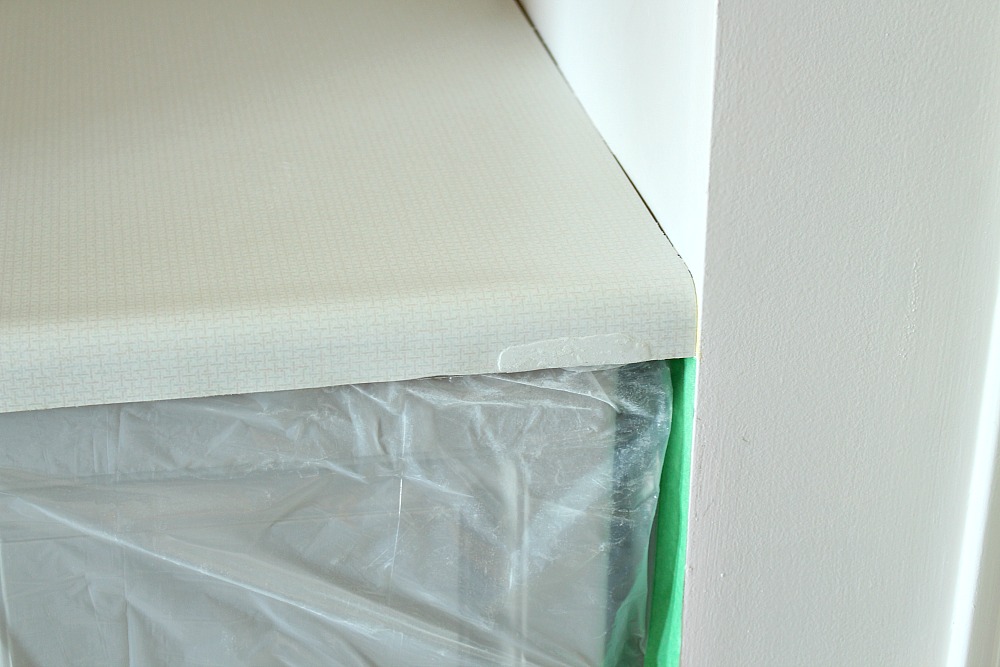 I kneaded the epoxy together, as per the instructions, and then applied it to the missing area.  I pressed it into the MDF and smoothed it as best I could.  Once it was dry, I sanded it and then the repair was hidden beneath the Rust-Oleum product.  It looks good – but not 100%, because I really should have smoothed it much flatter before it dried.  I thought I could fix any bumps in sanding but once it dries it’s really, really hard.  So if you try this trick, get it as perfect as possible while it’s still mold-able.  Otherwise, we were all really impressed with how easy it was to repair the laminate counters with this product.  And the shimmering new counter coating really does disguise the repair job – it is definitely much better than a huge missing chunk! 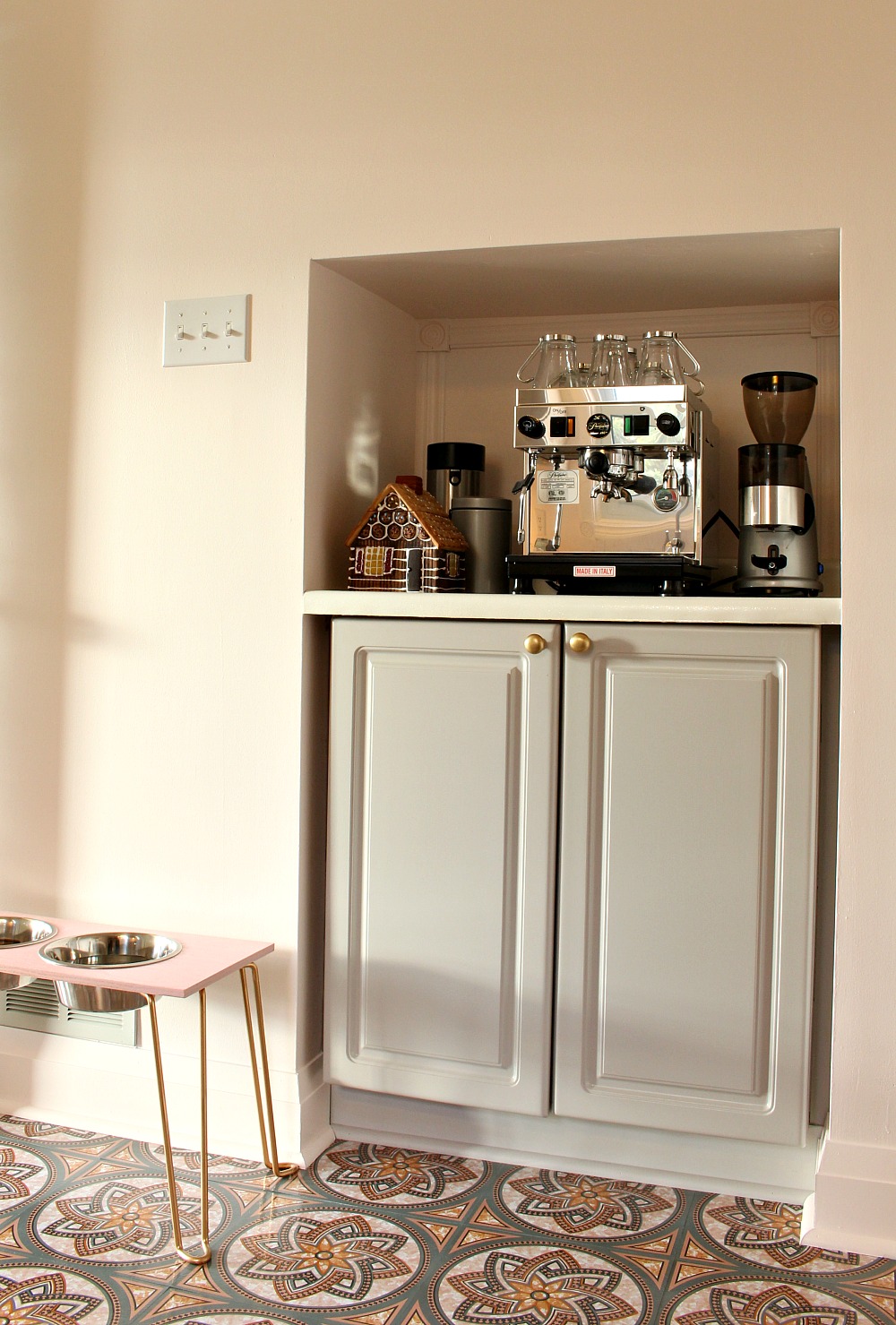 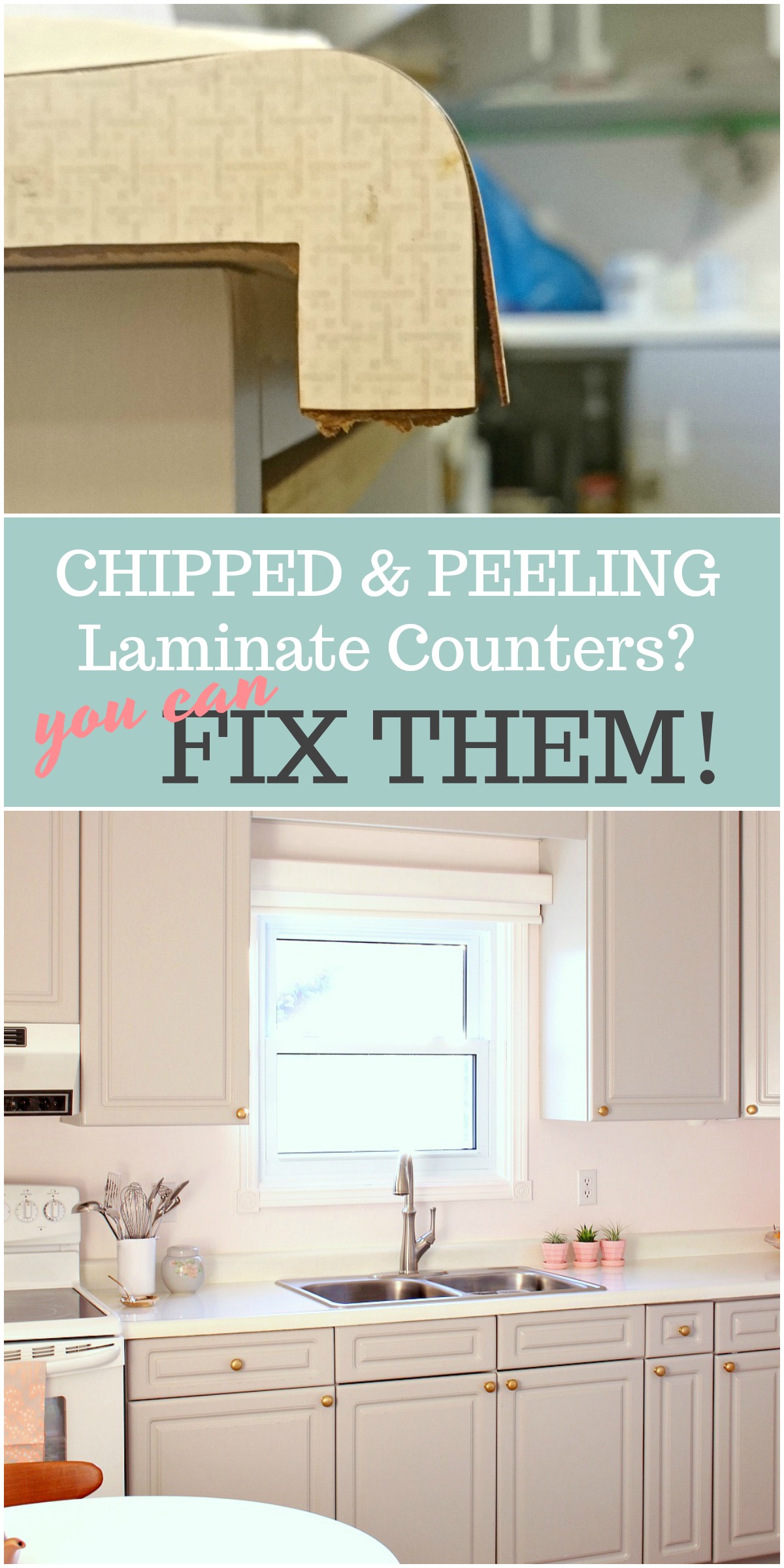 How to Refinish Laminate Counter Tops:

With the laminate glued back in place and the chips repaired, it was time to start refinishing the laminate with the Rust-Oleum Countertop Transformation kit! 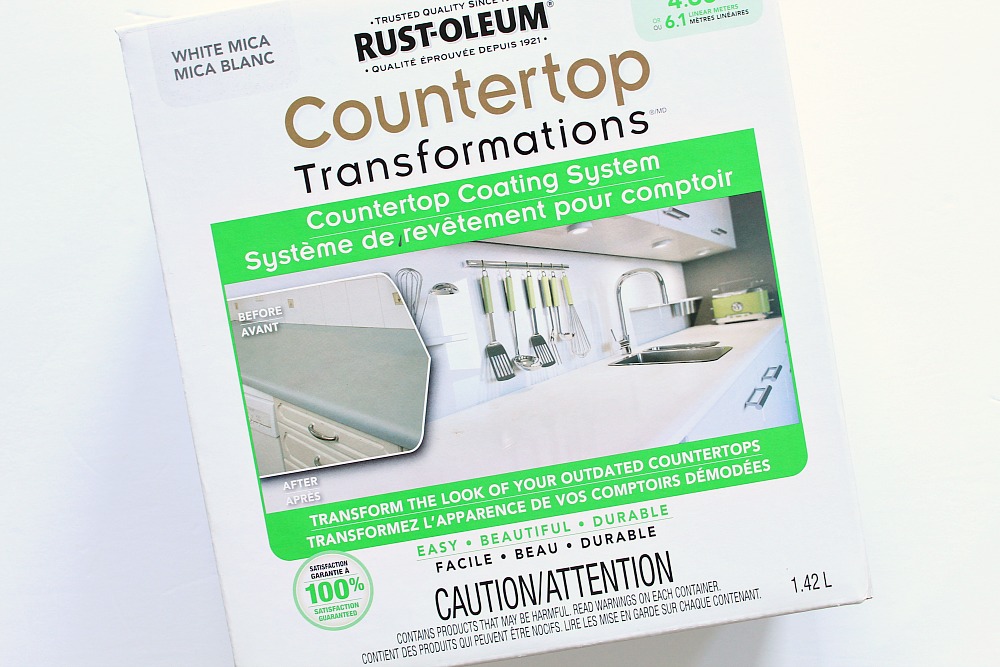 We removed the sink because we were replacing it anyway and this made the finished counter look much better (but you can work around a sink, that’s no problem).  If you try this kit, follow the instructions included – to the letter!  But here’s a brief overview so you can see what to expect.

We covered the freshly refinished cabinets with plastic and taped off the wall behind the backsplash.  Before starting, we gave the counters a good scrub with soap and water and let everything dry completely.

Following the Rust-Oleum instructions (there’s a really great instructional video), we sanded the entire surface using the diamond-embedded sanding block provided in the kit.  This was dusty, tiring work (a dust mask and eye protection were required!), but an essential step to ensure the new finish adhered properly.  The sanding served to de-gloss and dull the counter top by creating super fine scratches.  To remove the dust, we used a dust pan and then wiped thoroughly with a damp cloth – it took a few passes to get it clean.  It was handy working together because we had two sets of eyes to check for any dust residue before moving on to the next step. 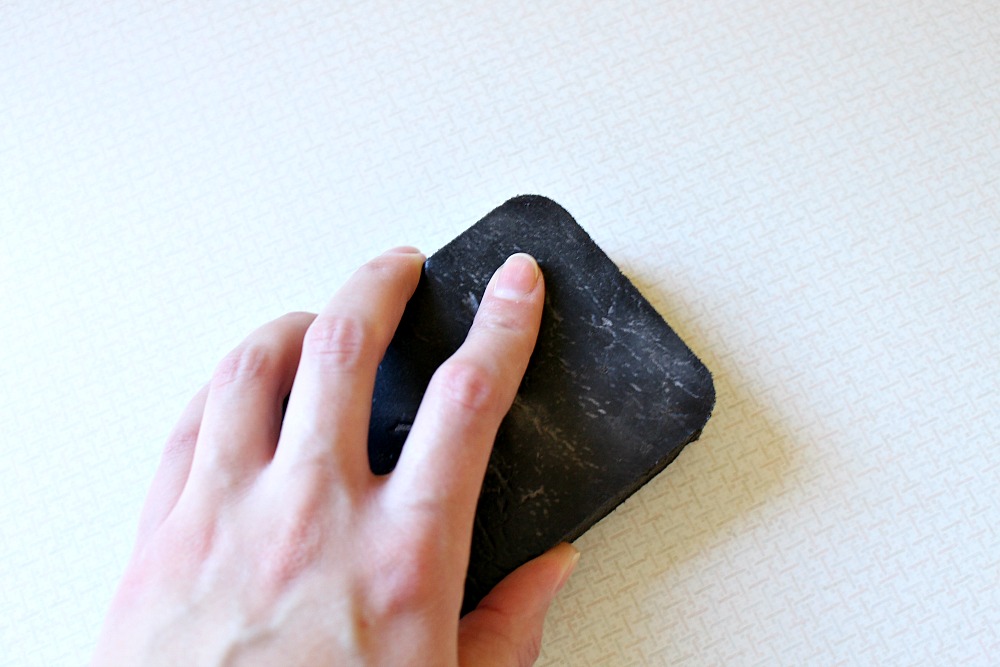 For the base coat (which requires two coats), Mom and I worked as a team so I don’t have many photos.  I painted the base coat with a brush onto the backsplash and onto the counter a few inches, in addition to painting the edges where the stove and fridge go.  Meanwhile, Mom used the small roller provided to apply the base coat to the surface of the counter.  We applied the two coats of base coat two hours apart.  It was a bit tricky getting an even coat without applying it too thick – re-rolling, as per the instructions, was the most stressful part.  This base coat performs differently than paint, but we eventually got the hang of it. 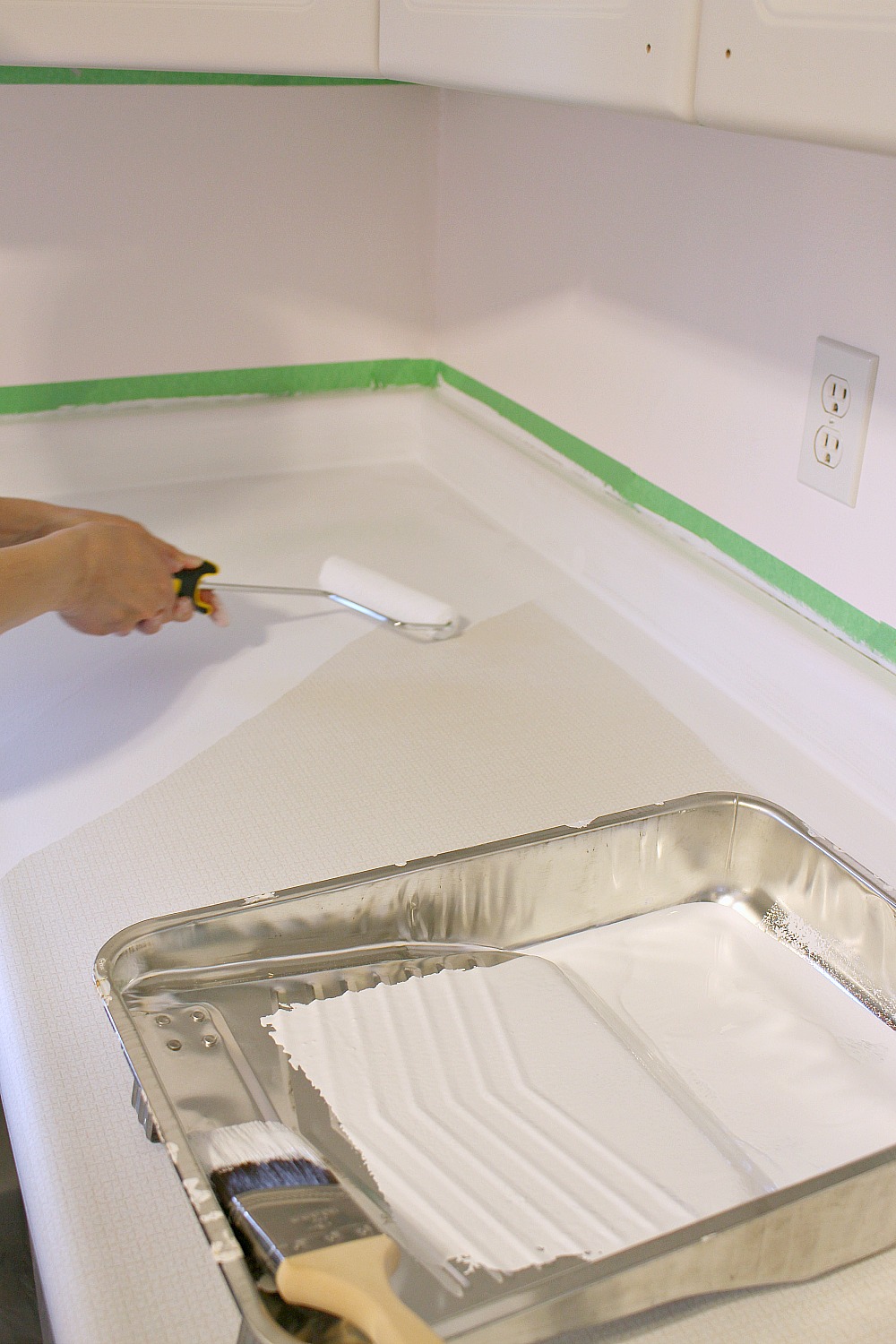 Here’s a shot right after we painted the second base coat application (excuse the dim photo, I don’t even want to admit how late at night we were working on this): 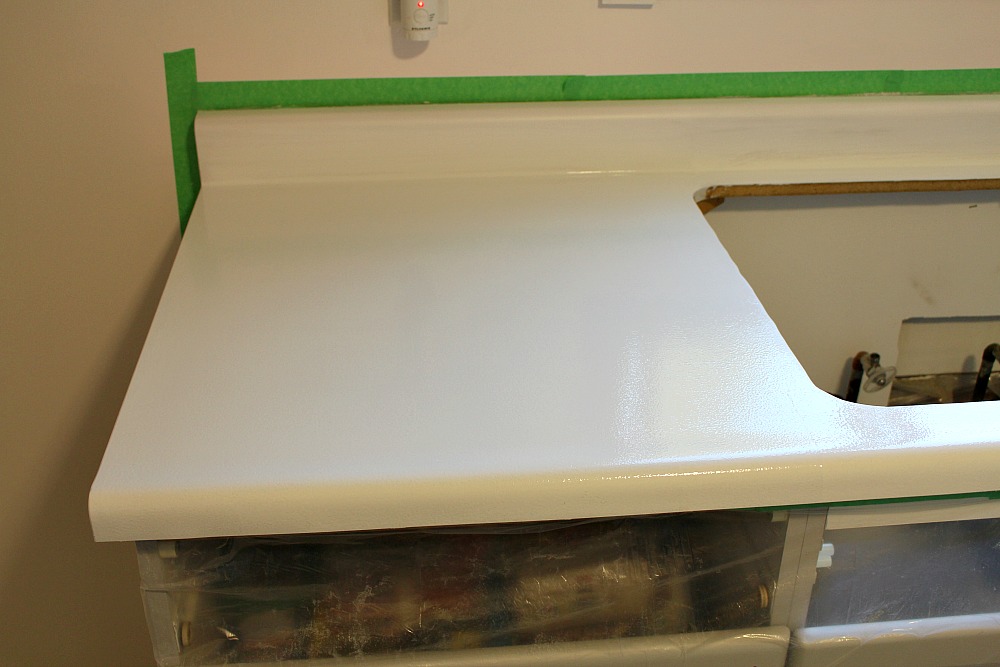 Before calling it quits, we removed the painter’s tape.  We allowed the base coat to dry 12 hours (overnight) and then applied the mica top coat – which has to be applied within 24 hours.  It’s so sparkly!  Opening this can is what prompted me to try to add glitter to my painted vinyl floor. 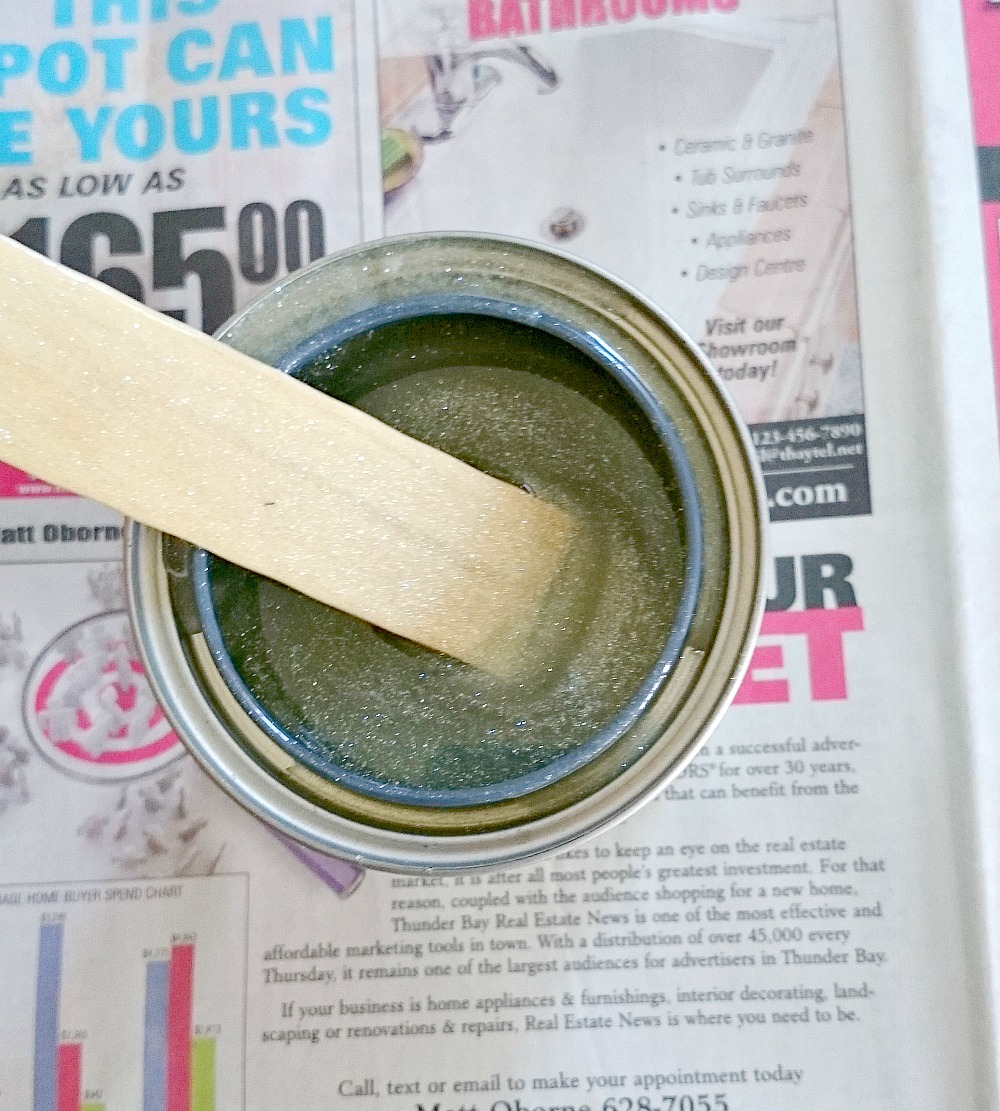 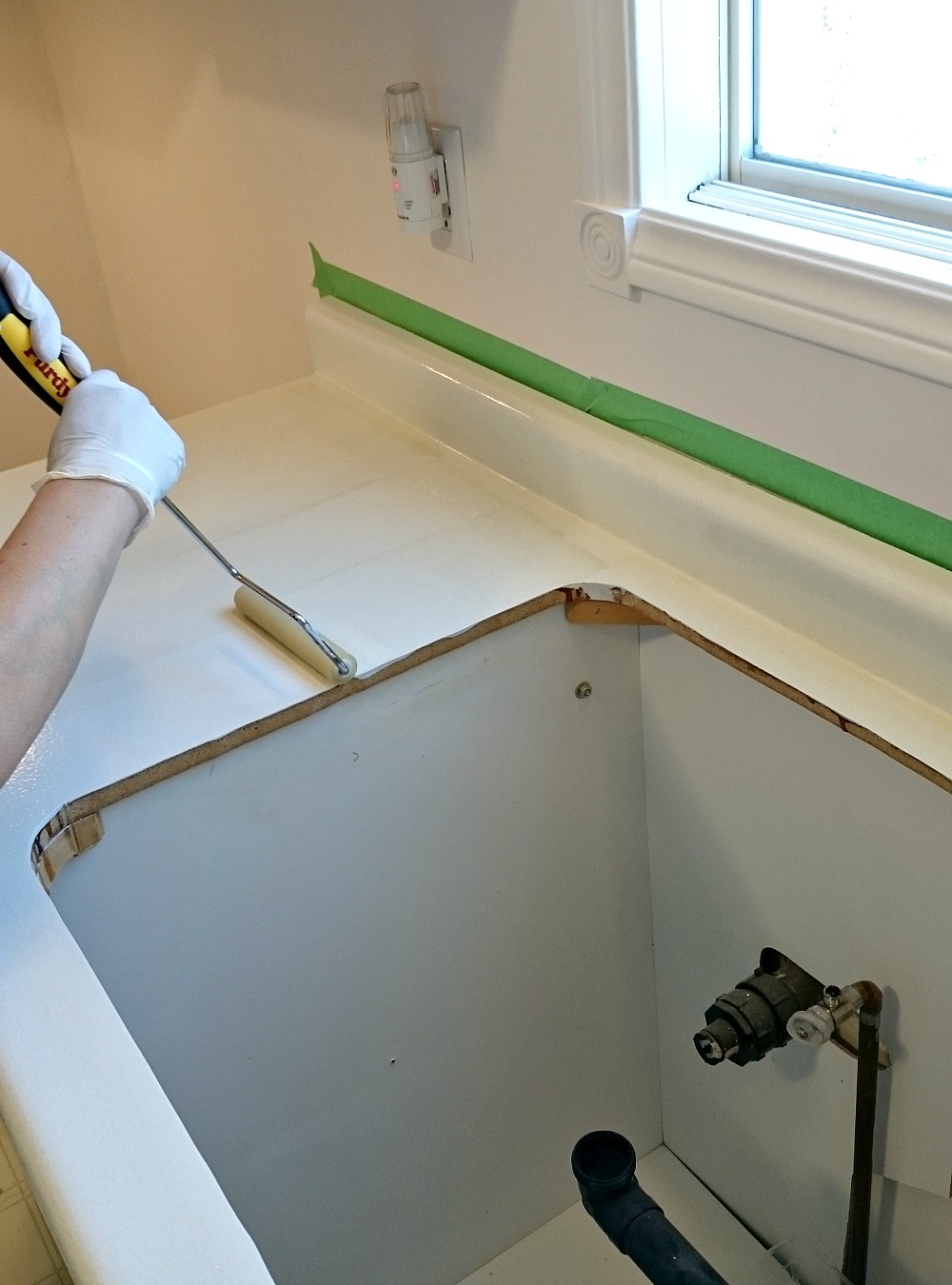 We wiped the counter with a damp cloth and allowed it to dry while we re-applied the painter’s tape.  We mixed the two part top coat, which had to be stirred for two minutes, and then we had four hours to apply the mica.  It doesn’t take that long to do, but that’s how long you have until it’s no longer good.  Once again, we brushed it onto the backsplash and then rolled on the surface, spreading out the mica so it didn’t clump.  It was challenging to get good coverage without the clear coat pooling in any areas where the counter wasn’t level, but we fussed with it until it looked good. 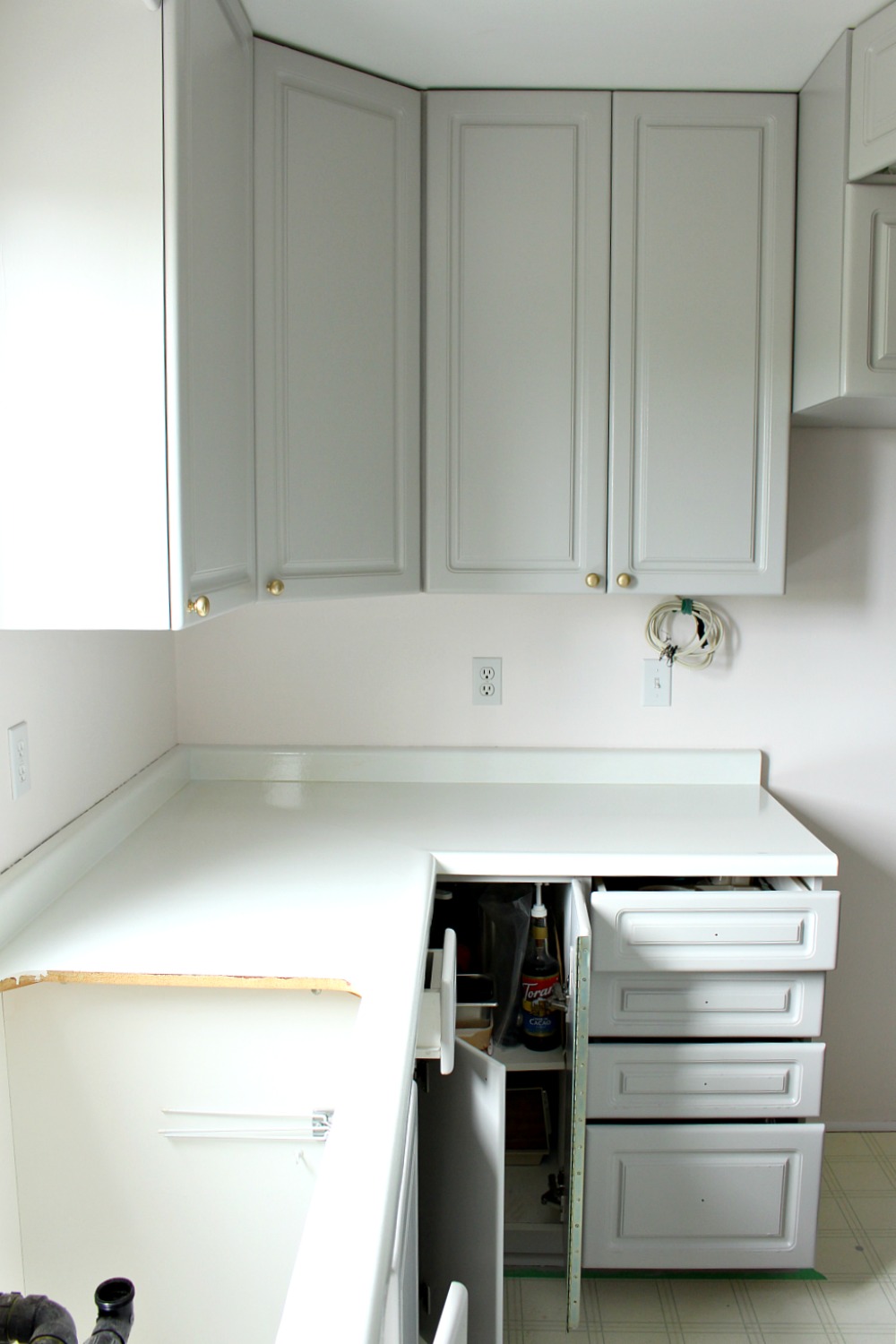 Can you see that huge gap between the counter and the wall?  Didn’t see that in the reveal, right?  That’s because I have mad caulking skills.

It was definitely a full weekend of work to repair and refinish laminate counters, but when it was all done, Mom and I were thrilled!  My Dad was less thrilled, because they had to wait two days before resuming light kitchen use and a whole week before the kitchen could be used as normal (how would he make the COFFEE?!?!), but it was worth the wait for my Mom.  She’s just smitten with her “new” counters. 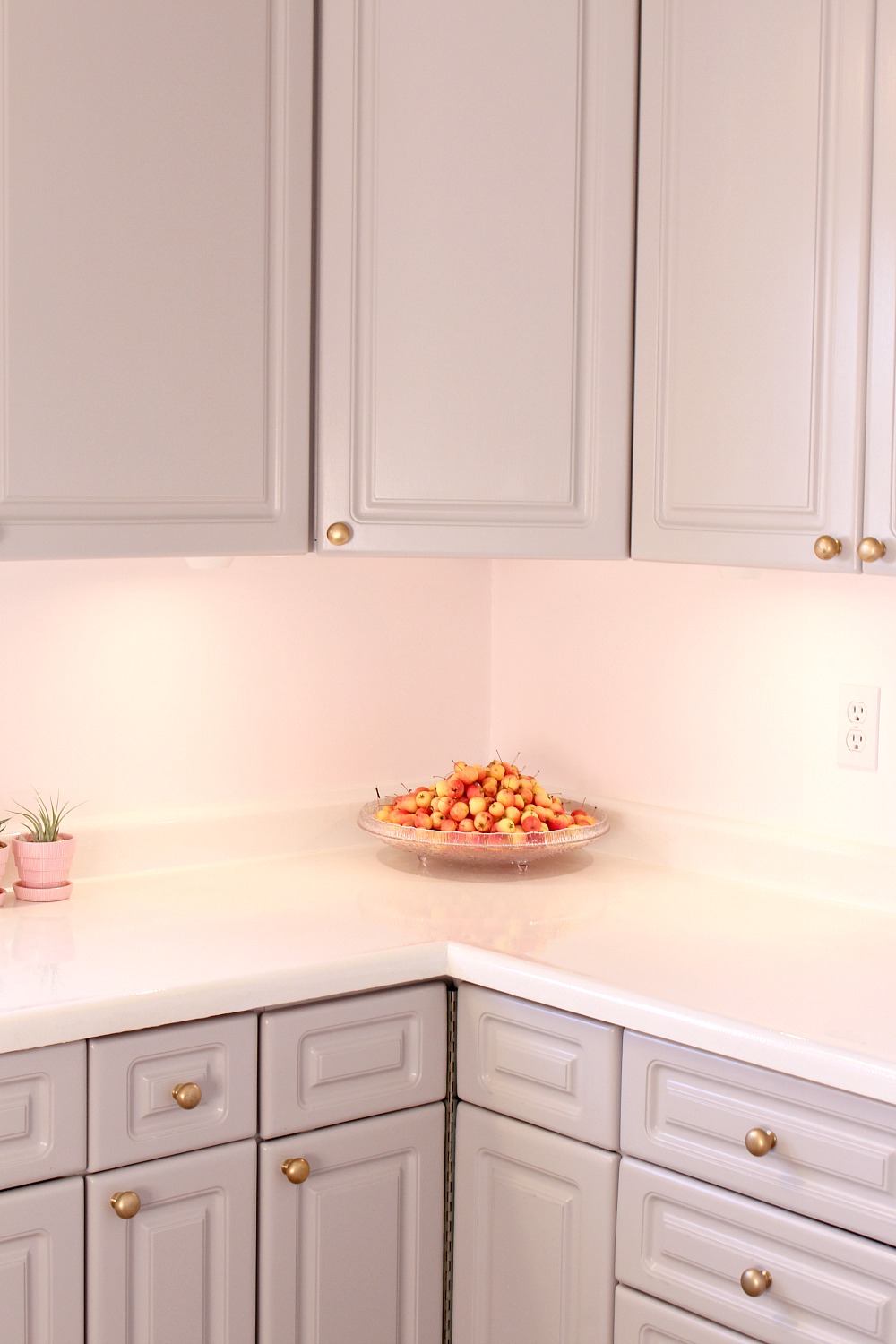 The only drawback was that the clear coat yellowed the surface more than we anticipated and it became a creamy white as opposed to the stark white we were hoping for.  For a moment, we wished we’d chosen black, which seemed more foolproof.  But once we finished the kitchen and styled the counter ever so slightly (I’m trying to wean my Mom off kitchen clutter), the creamy white worked – and looked gorgeous against the blush pink walls.  So it was the perfect choice in the end, but just know that the white will be more of an off-white, if you’re tempted to try this kit. 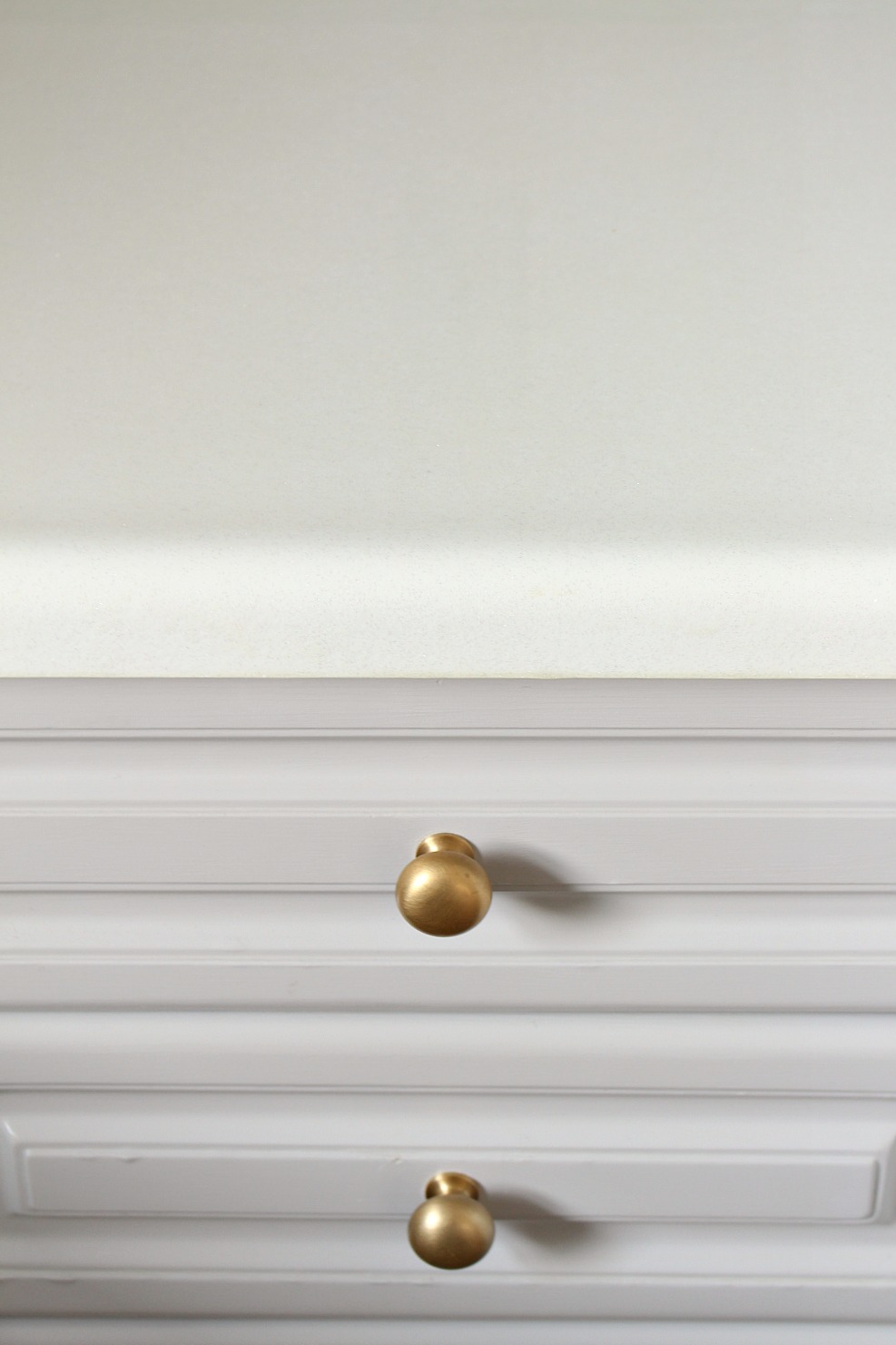 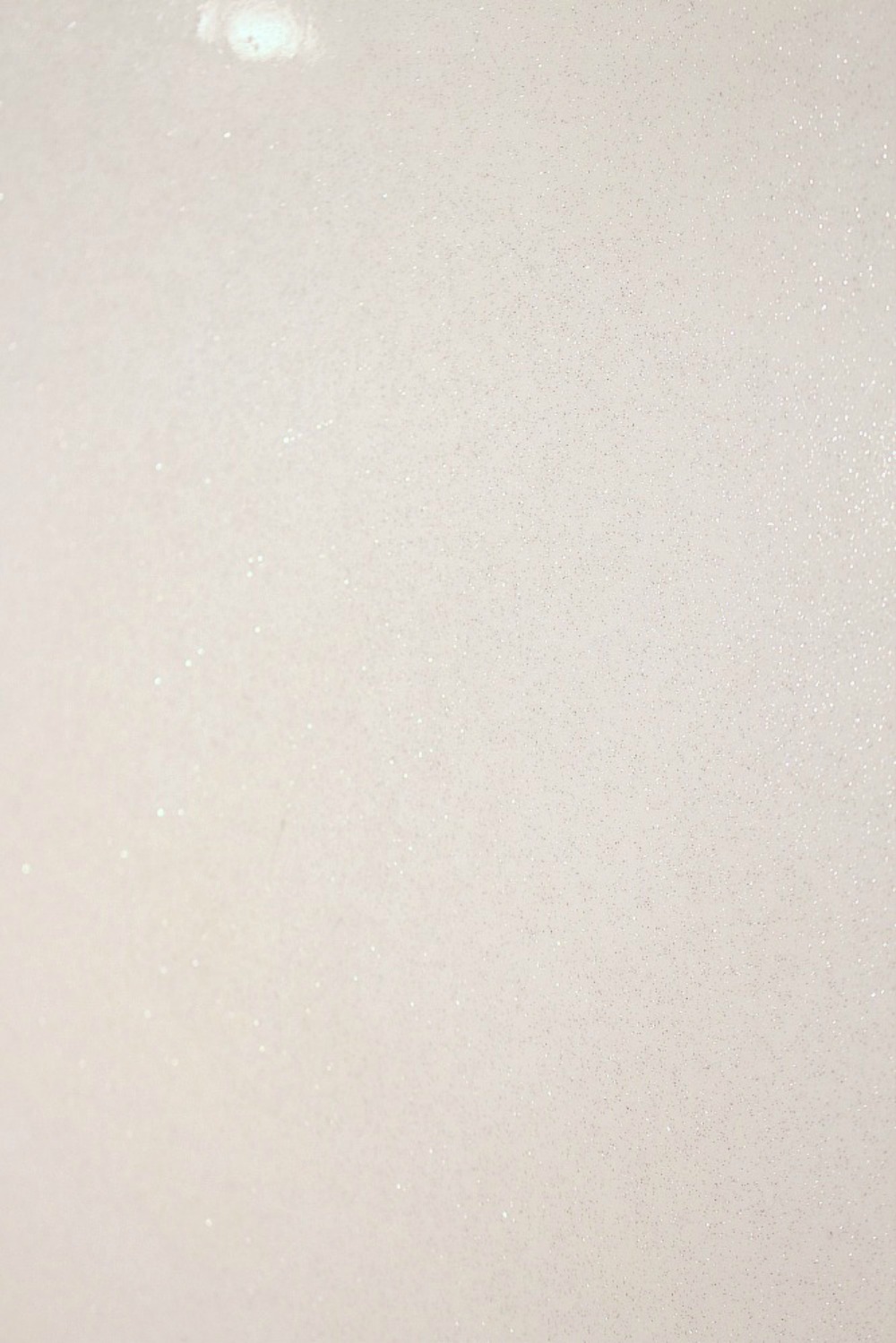 It’s difficult to capture the mica because it blurs when the light hits, but just know that this counter can be REALLY shimmery when the sun hits – you have to like sparkle (which we do!). 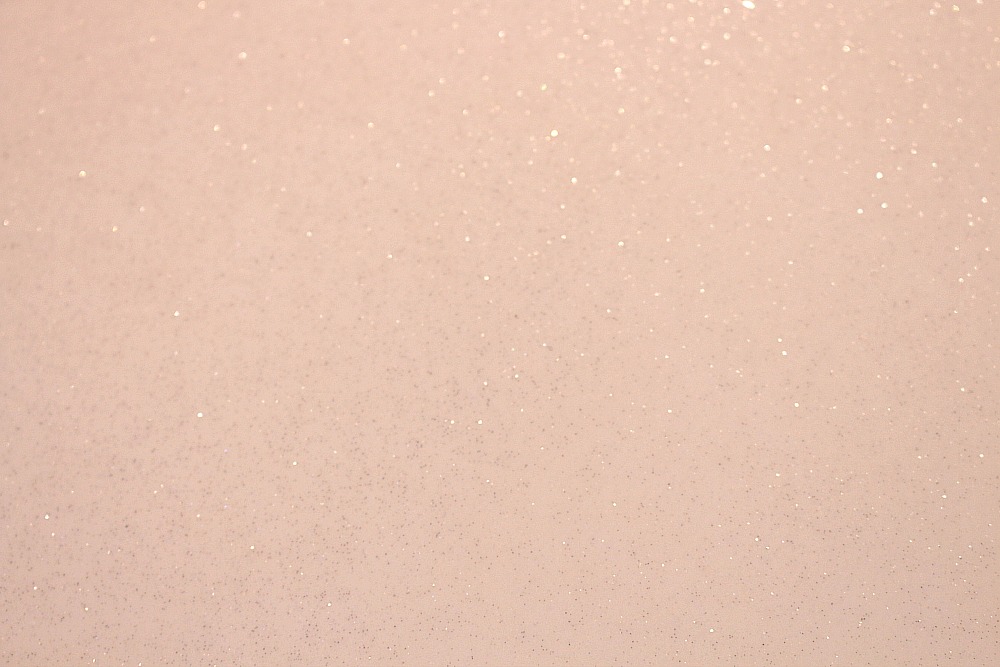 When the sun or under cabinet lighting aren’t shining on it, the counter is best described as glossy – no, gleaming: 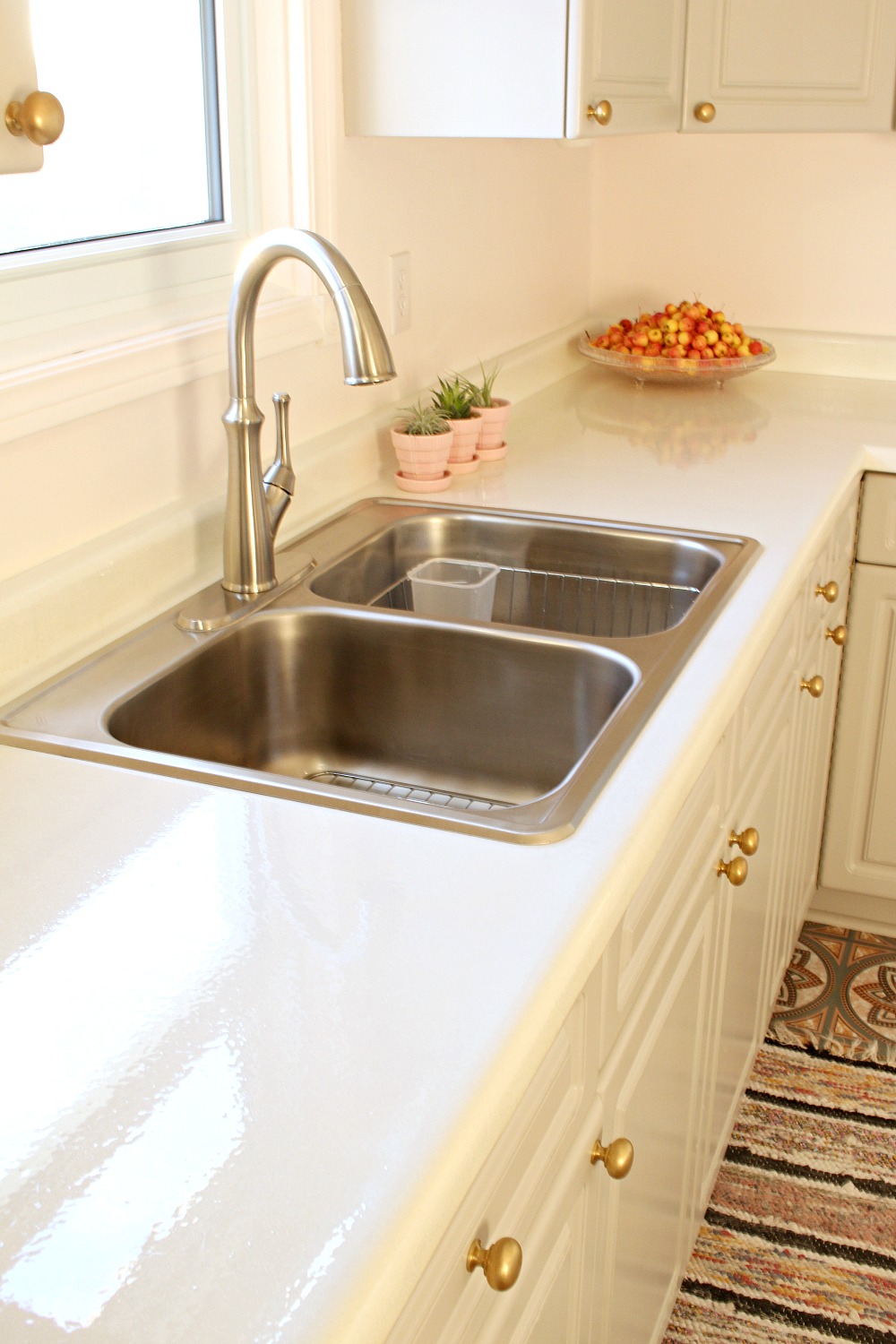 Look at the pink McCoy pots actually reflecting in the surface!  This glossy finish is perfect for a small kitchen because it really bounces the light around. 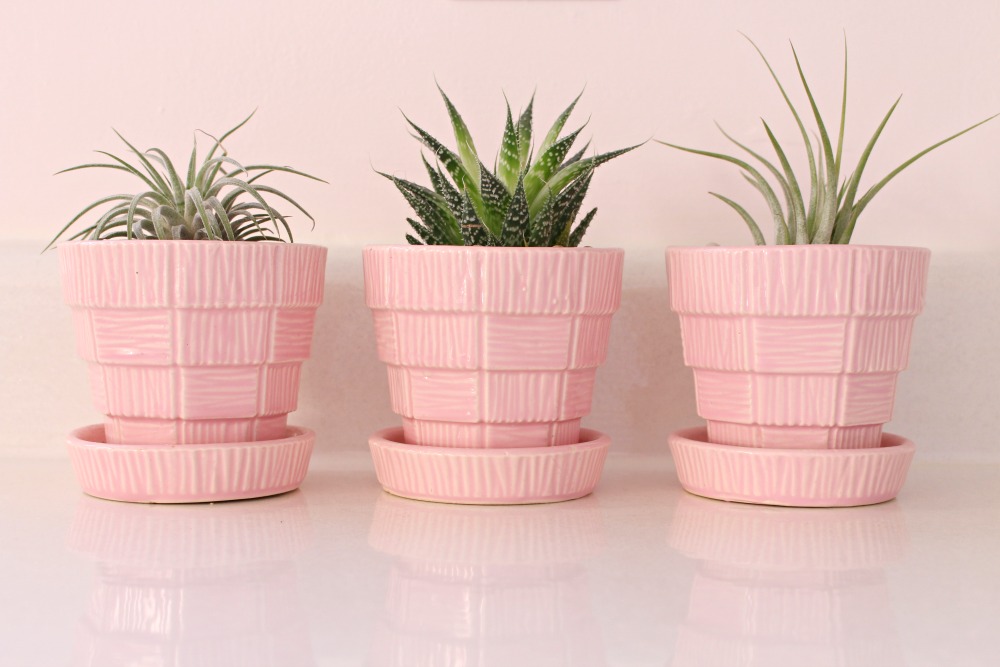 Would I recommend the Rust-Oleum Counter Top Transformation Kit?

Yes, definitely – but only if your counters are super sad looking.

For my Mom’s kitchen, with terribly worn out counters, the repairs plus the kit made a HUGE improvement and my Mom is thrilled!  The Rust-Oleum coating hid the scratches and our repairs, and just brightened the room.  But I think that, in some lights, it does have a “painted” look – especially because the seams are now hidden.  More importantly, my Mom has reported that you can’t put anything hot on it, not even a hot coffee pot, so it’s a little less durable than before.

If your counters are in excellent, amazing shape I wouldn’t recommend this unless they are truly hideous and you can’t stand the sight of them.  If you’re on the fence, don’t risk bunging them up because the base coat and top coat are not foolproof.  But if your counters have seen better days, this is definitely worth the time and effort.  Mom’s counters just look SO much better now.  We would definitely try this again!

If you missed the reveal of my Mom’s budget-friendly, pink and grey kitchen makeover, be sure to check it out!

This post is collaboration with Rust-Oleum, a long time supporter of Dans le Lakehouse.