Want to learn how to make layered smoothie look?  There’s a little trick to keeping the layers from blending all together! 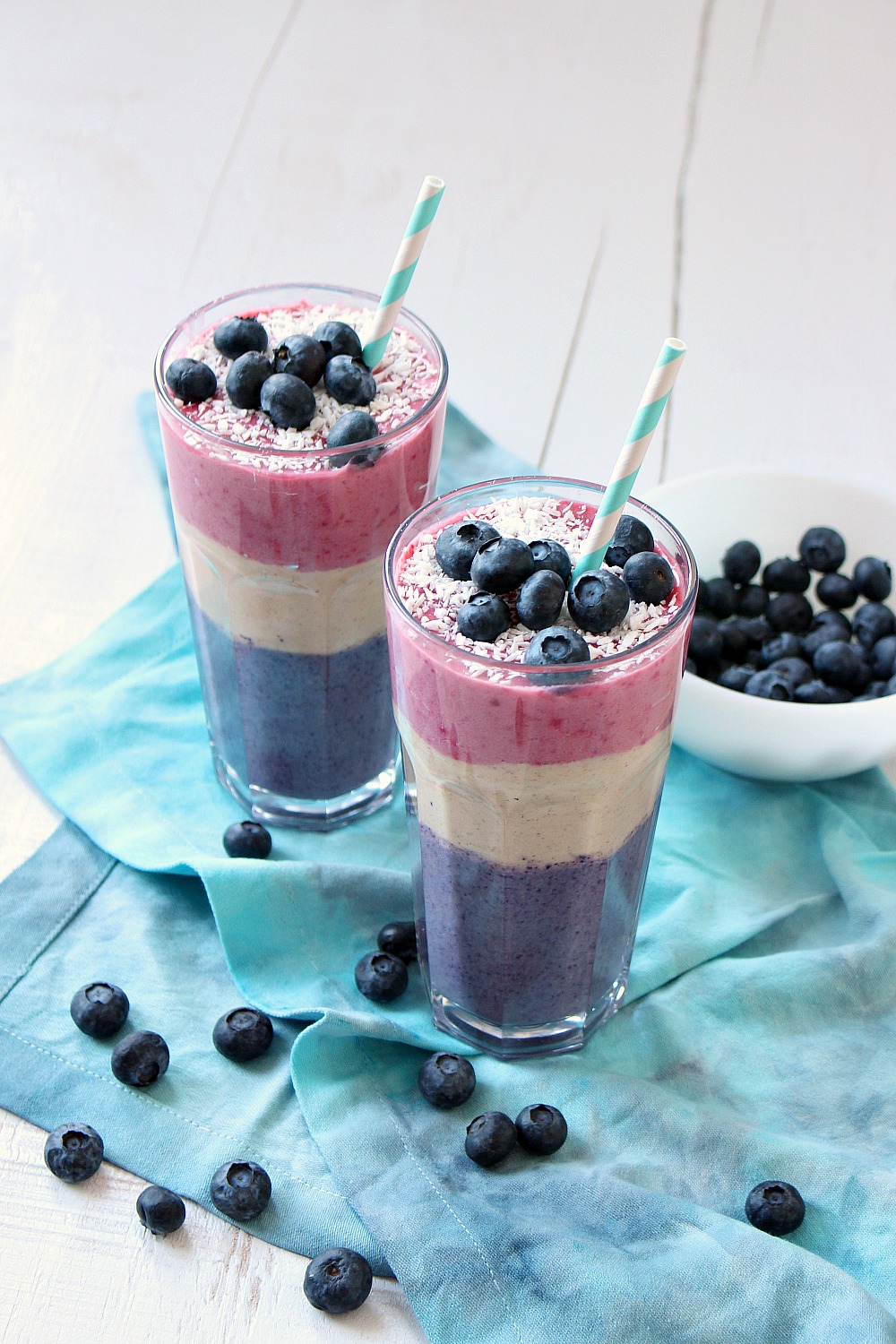 Handy Hubby and I are smoothie OBSESSED.  In the summer months, it’s an unwritten rule that we carry our smoothies out to the deck.  They’re deck drinks.  In the winter, we still love a good smoothie but they’re best enjoyed fireside, wearing thick socks and cozy sweaters.  Preferably under a blanket. 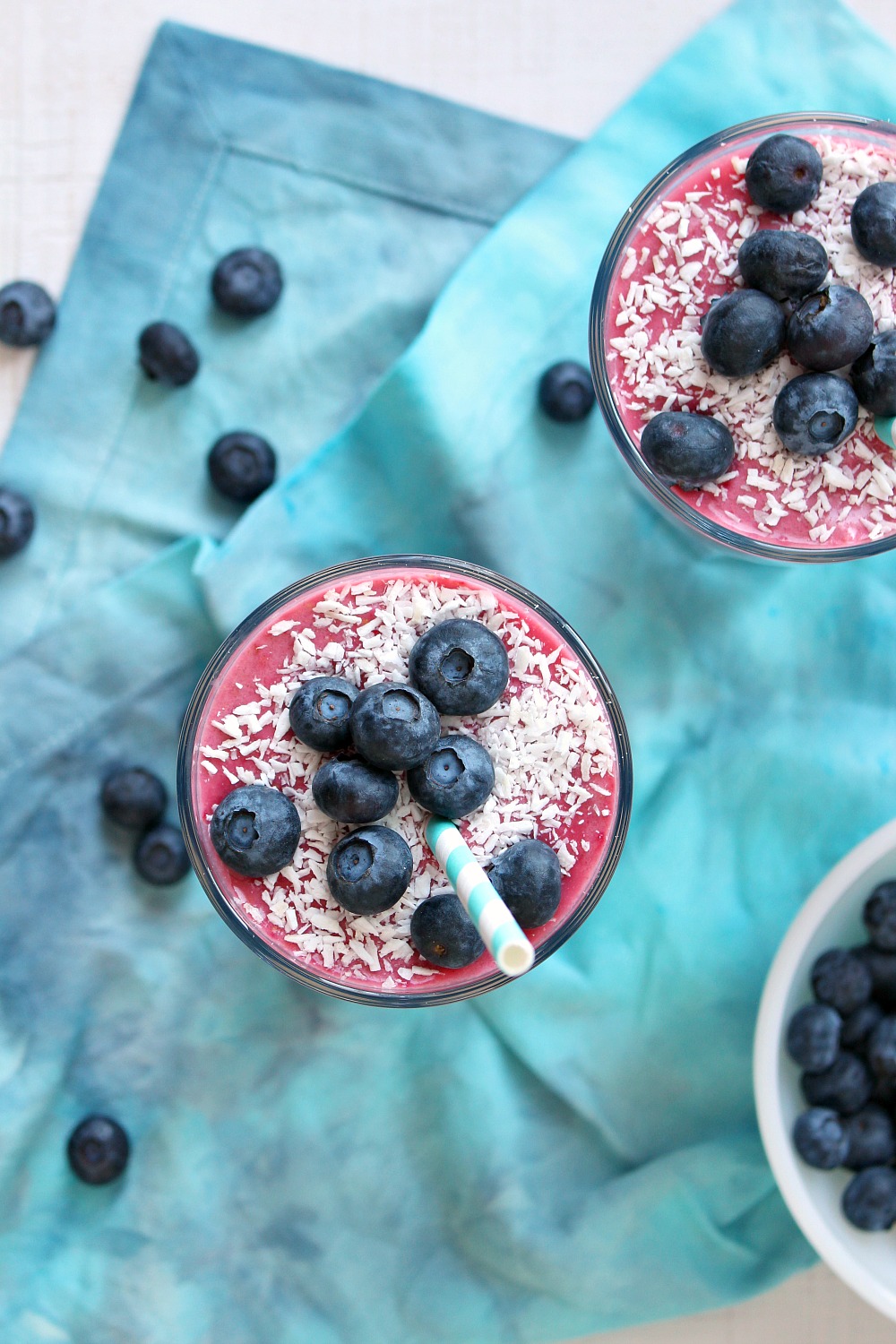 To facilitate the smoothie obsession, we own three different blenders (because sometimes we want another smoothie while the first blender is still in the dishwasher – I kid you not).  I’ve tried SO many different smoothie combinations, but I’m always on the look out for new smoothie ideas (pinned to both my “Breakfast + Brunch” and “Drinks” boards), although I rarely follow a recipe.  I like to make it up as I go and I mix it up a lot, depending on what’s in the fridge and freezer – and how adventurous I’m feeling.  I’ve learned that smoothies are a great carrying agent for healthier fare like greens, whey protein powder, and flax seed.  I’ve also been getting pretty festive with my concoctions – I still salivate, just thinking about a pumpkin pie smoothie I made to help me get into the spirit of fall.

Lately, though, I’ve been wanting to up my smoothie game.  After seeing some gorgeous layered smoothies on Pinterest, I wanted to give it a try!  There’s a little trick to making a good layered smoothie, but otherwise it’s actually really easy to make. 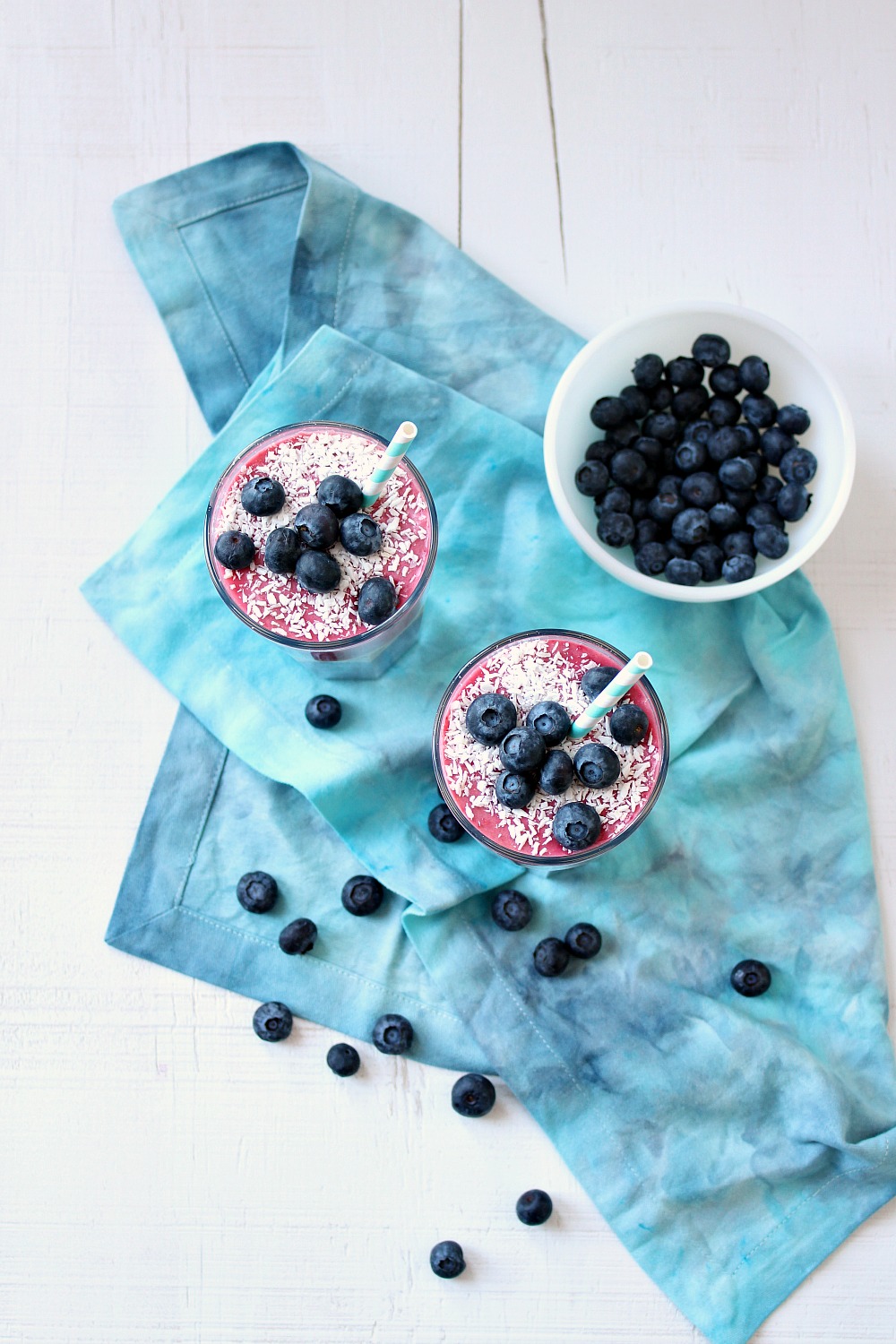 Here’s the secret for how to make a layered smoothie: pop the glasses in the freezer for about 15 minutes after pouring each layer.  You don’t want the layers to be frozen solid, you just want them to morph into a slushier consistency to prevent the different colors from bleeding together.  Here’s how I knew they were ready for the next layer: I shook the glasses a bit and if the smoothie sloshed around in the glass, it wasn’t ready.  If it only jiggled a little, it was firm enough.

Because of this extra step, layered smoothies are a tad more time consuming so they’re not practical for a speedy workday morning, but for a lazy afternoon snack or Sunday brunch they’re perfect!  Hubby and I loved how each layer had a subtle but distinct flavor, but you could definitely create wildly different layers for a unique taste experience.  The best part is how pretty they are, which I swear makes food even tastier. 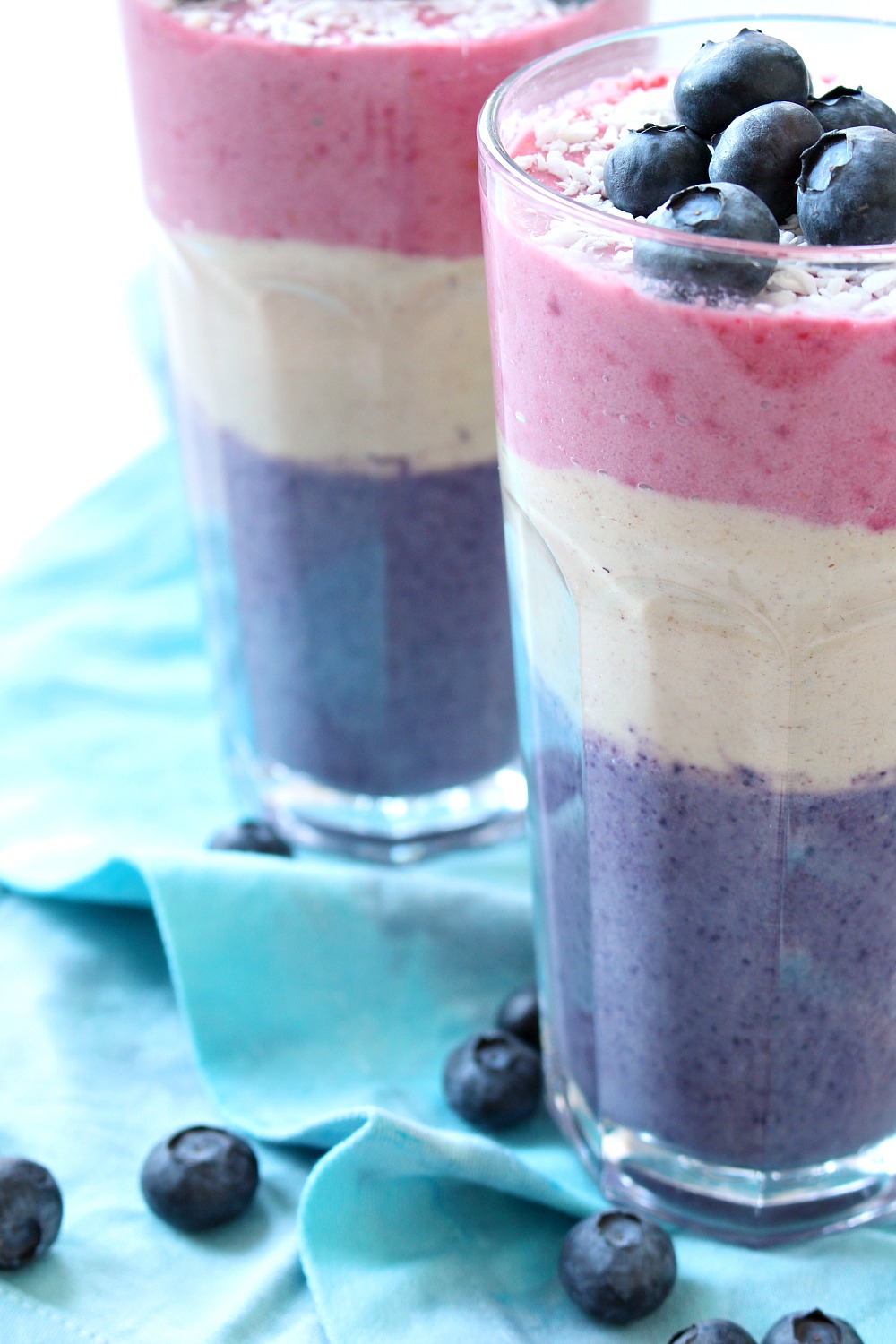 Here are the three smoothie variations I layered together – I kept it very simple.  These measurements made two 16 oz. glasses, with a tiny bit left over for the chef.  Because I was making three mini-smoothies, I used my Nutri Bullet Blender, which was perfect for the job. 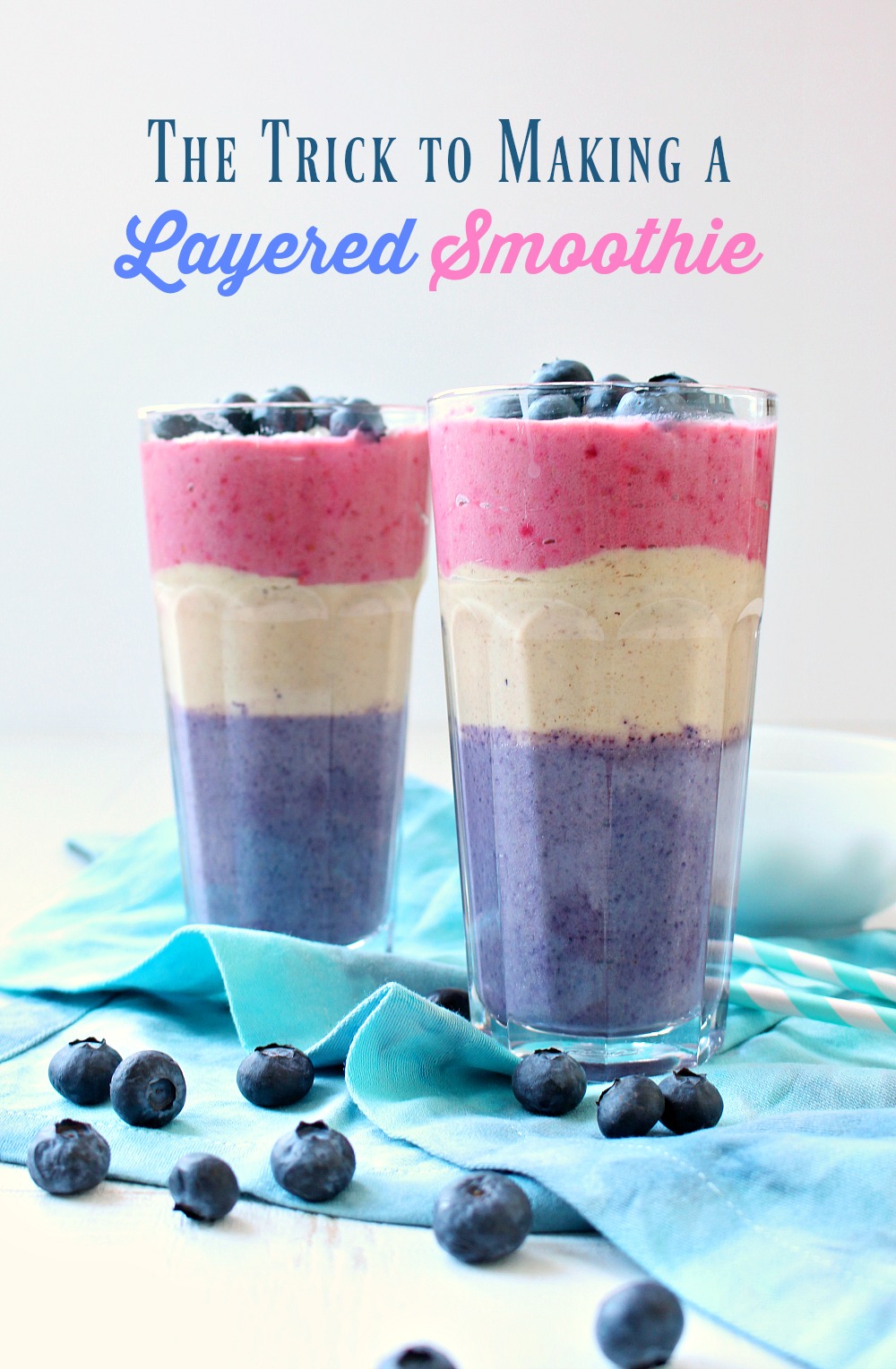 This post, about how to make a layered smoothie, was sponsored by Wayfair, but all thoughts and opinions are my own.