Sometimes our home looks suspiciously devoid of puppy paraphernalia, so people always ask where I keep Hynda’s stuff!  The secret?  She lives in the office (where I pretty much live, lol). 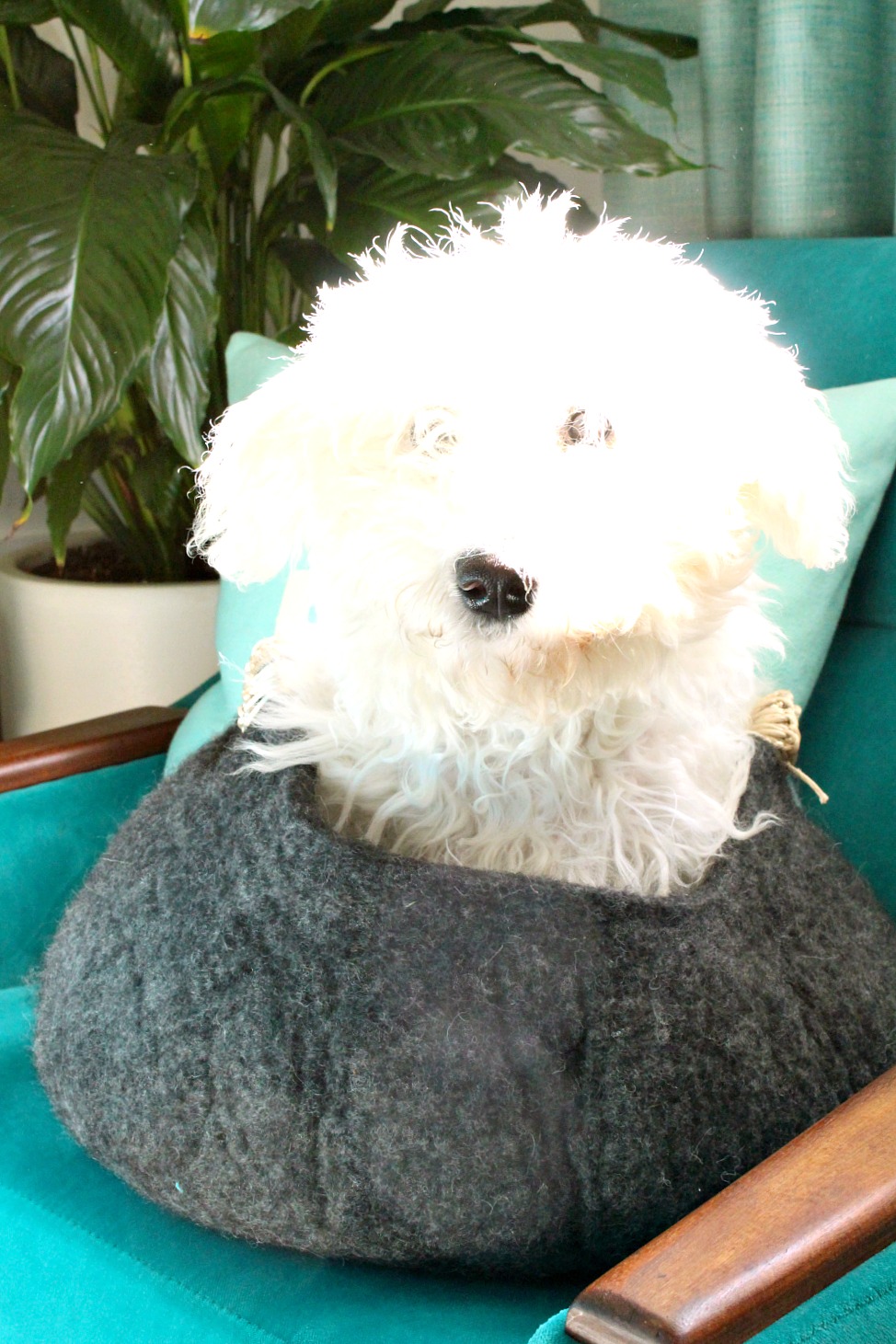 Well, since she’s more house broken these days (we’re at one or two accidents a month – so much better than three a day!), she’s free to roam with Szuka for much of the day, but her crate, pen, and food live in the office so she has a safe, quiet space to eat and nap away from Szuka, (who I feed in the laundry room).  But they both love to play in the living and dining room, where I keep dog beds and a basket of toys.

I wanted to share a little update on how we’ve all be adjusting, some progress Hynda has made, and also share some of the stuff that made getting a new puppy so much easier!

This time around, I actually bought TWO turquoise dog crates: a plastic travel crate and a wire crate for home.  I prefer the wire crate for home because it seems like it allows more air flow but the metal can rattle in the truck – which really bothered Szuka when she was a pup – so Hynda is way more spoiled with two crates.  This is similar to what we have – if not identical – but I wish we’d seen this two-door crate first, just for a little more flexibility.  Actually, if I had the money I would have gone with this crate because it looks like a gorgeous piece of furniture!

We originally kept her wire crate in the dining room because it’s a central space in the house, but she was so distracted by Szuka that she never slept during the day!  So we moved her into the office because Szuka rarely goes in there so it helped them both get some space.  We crate trained Hynda early on because I read that it plays to a dog’s instinct to find safety in a den, plus it helps the bladder grow stronger to be in a place a puppy doesn’t want to soil.  Szuka NEVER took to her crate but we quickly learned she is such a good girl (hardly any accidents!) and by the time we moved from our townhouse to the lakehouse, she was already sleeping loose and these days she’s allowed anywhere in the house, even when she’s alone.  She never gets into anything, unless I’ve left a Kleenex lying around because she just loves shredding those.

But Hynda gets into SO much trouble, so we knew we’d need to get her used to a crate.

In truth, because we were on holidays for a good chunk of time when she was a wee little puppy, she spent a lot of time with us in the yard or getting one-on-one supervision, but we did put her in the crate for naps (and overnight), or if she was starting to really bug Szuka.  Happily she’s adjusted to it pretty well and sometimes even seeks out her crate for a little solo nap, which is such a good sign.  It helped that we made it a happy place, where she got treats and praise – and peace. 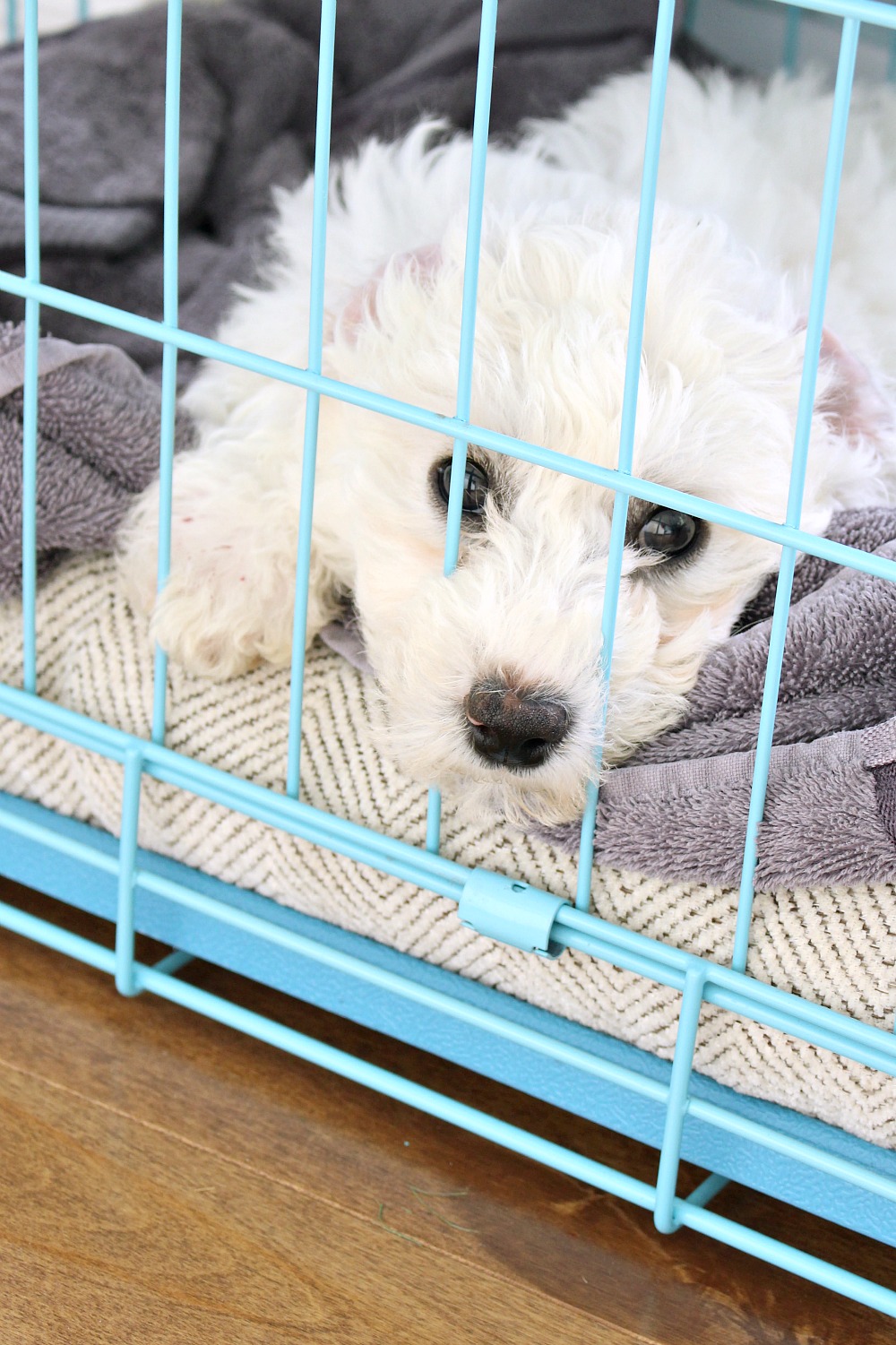 I also bought a pen to give her some extra room when I need her confined for her safety (like when I’m cleaning or can’t watch her).  She is very content in the pen, especially if I give her a treat to gnaw on.  It was a really good purchase because it keeps her safe and contained, but with more room to play than the crate.  The crate is attached to the pen so she has a safe space to sleep and nap.  It definitely takes up a huuuuuuge chunk of my office floor space though, so I look forward to a time she can be trusted to be loose in the house like Szuka – hopefully that happens someday.  Hopefully… 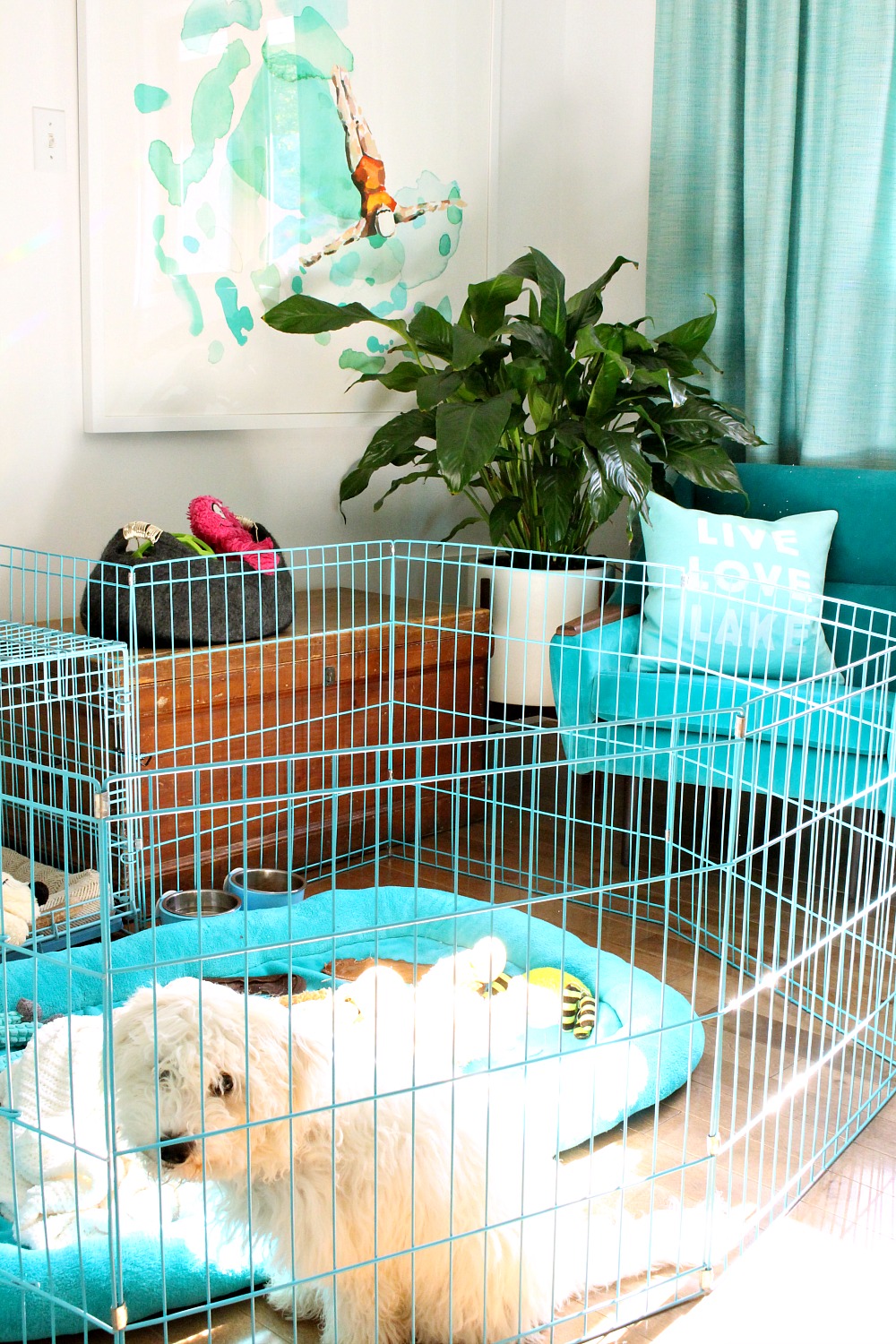 My Mom and I started to make a cute crate cover and then Hynda chewed it before we could finish, so now I use a blanket but I still plan on making a crate cover because it really helps her settle.  Crate covers also help disguise some of the uglier dog crates out there – not that my pretty aqua crate needs covering!  I am so crazy about the fabric on this one – I almost bought the matching dog bed.

Clip On Food and Water Bowls:

Because the office is her little place, I also keep her food and water in here (safe from Szuka, who inhales her kibble any chance she gets – but because she can’t fit into the pen, is foiled!).  I bought these handy bowls because they clip onto her pen or crate, so it keeps her from bumping them and spilling water and kibble all over the hardwood floors.  The stainless bowls just lift out for easy washing and re-filling.  I’ve been lucky that I can just leave food out for her, like with Szuka, and she grazes throughout the day.  I love dogs who can feed themselves!  Plus keeping her food in here creates a positive association with this space.  Although she eats whenever, I take the bowls away two hours before bedtime, which really helps her sleep through the night without needing a potty break. 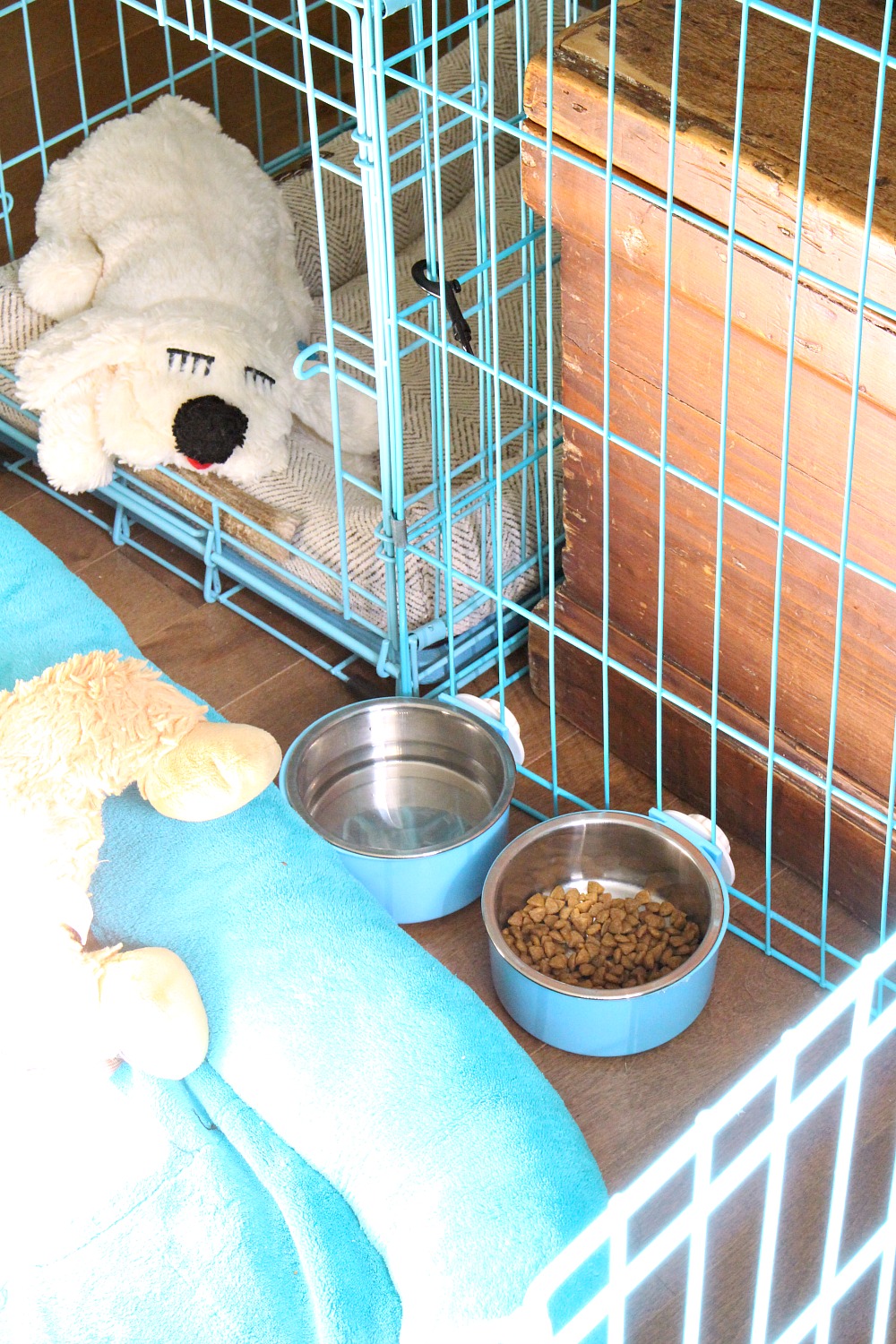 In a recent post about how I keep the house clean with two pups, you saw the basket I used to store toys in the living room, but I also keep some toys in here to keep her occupied. 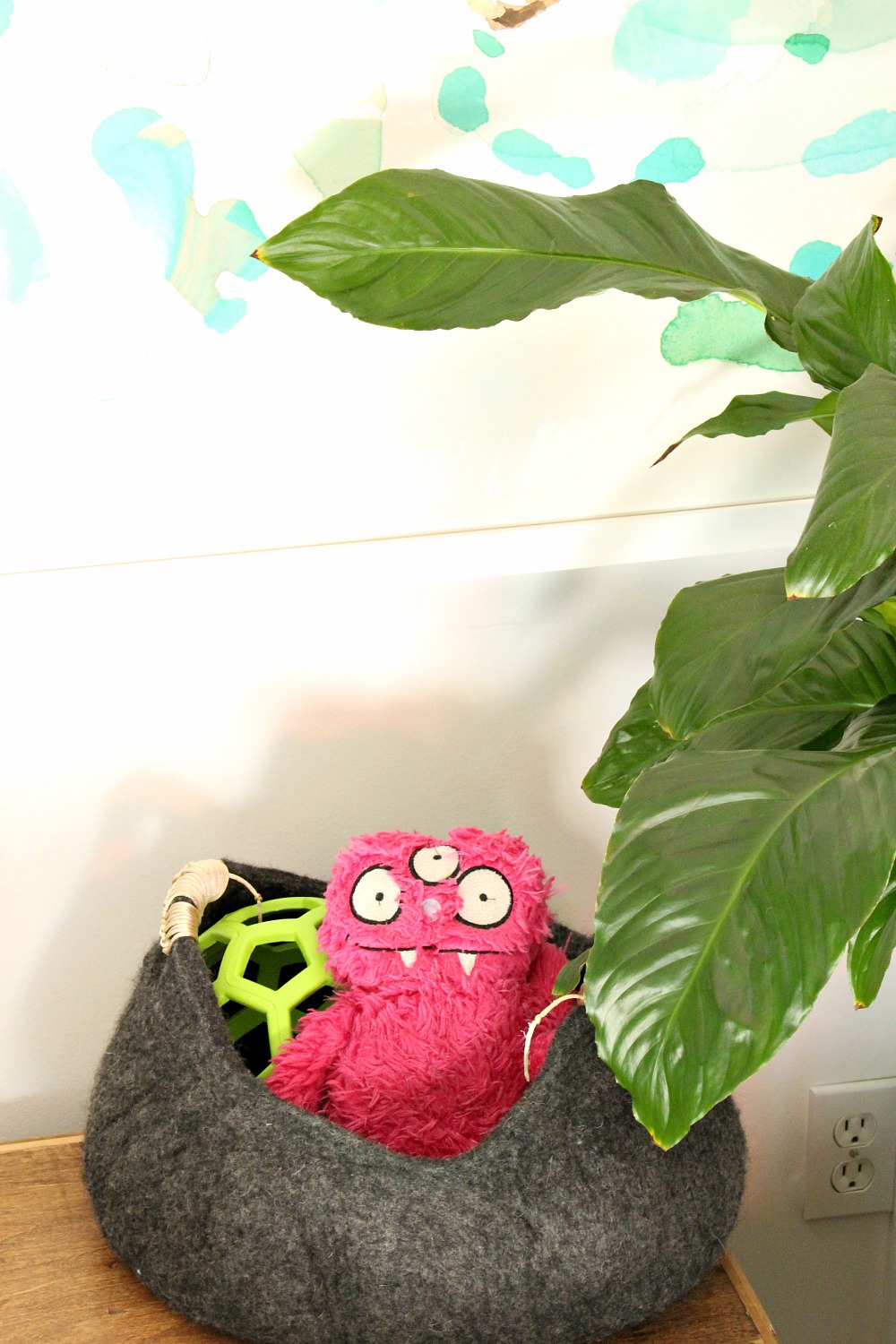 An online Canadian boutique (Sparroh) sent me this felted wool basket and I love it for Hynda’s toys because it’s soft and indestructible – but it looks chic in my office!  Sometimes Hynda even climbs inside for a cozy nap (it’s technically a cat cave – and this teal one has been added recently to the shop). 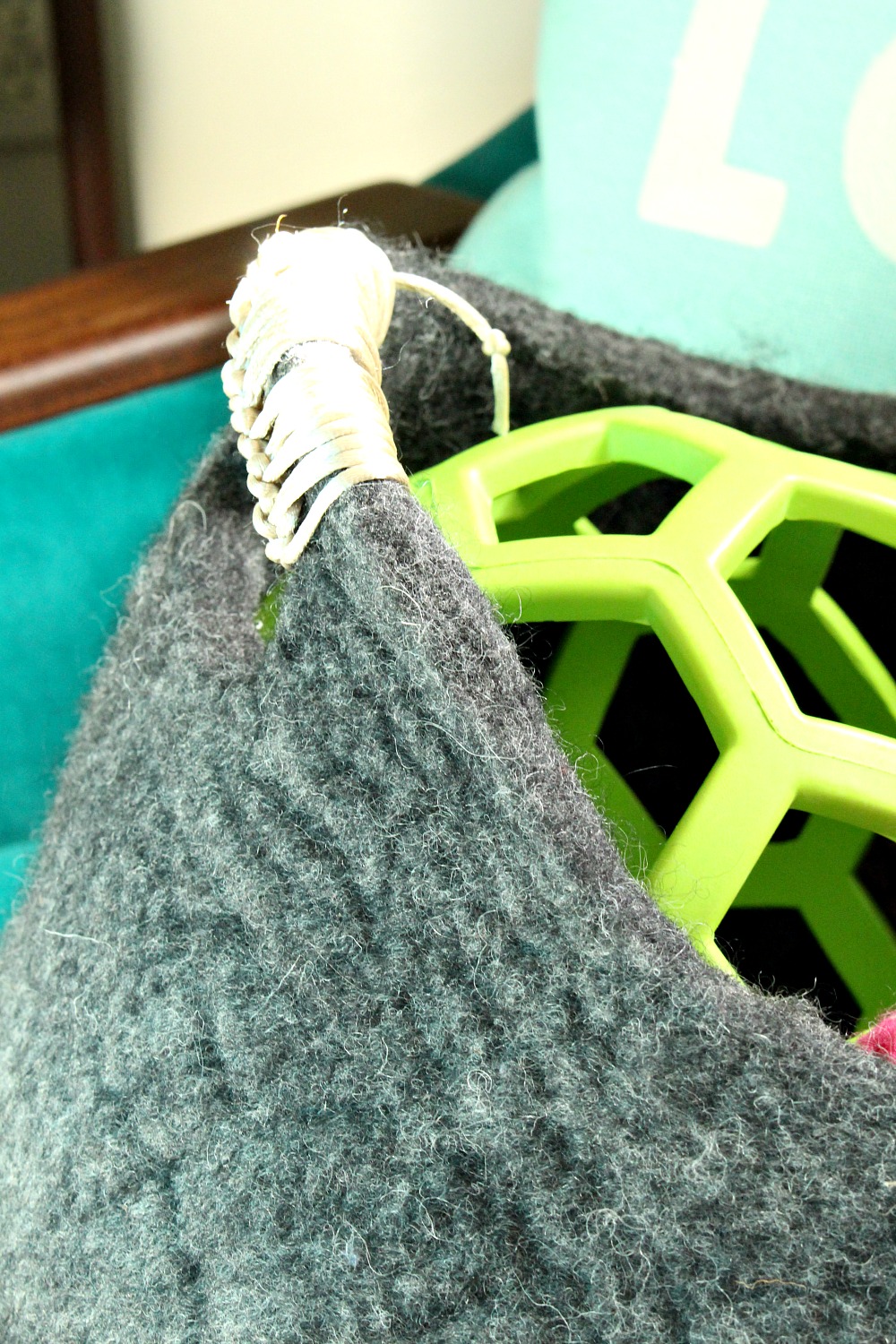 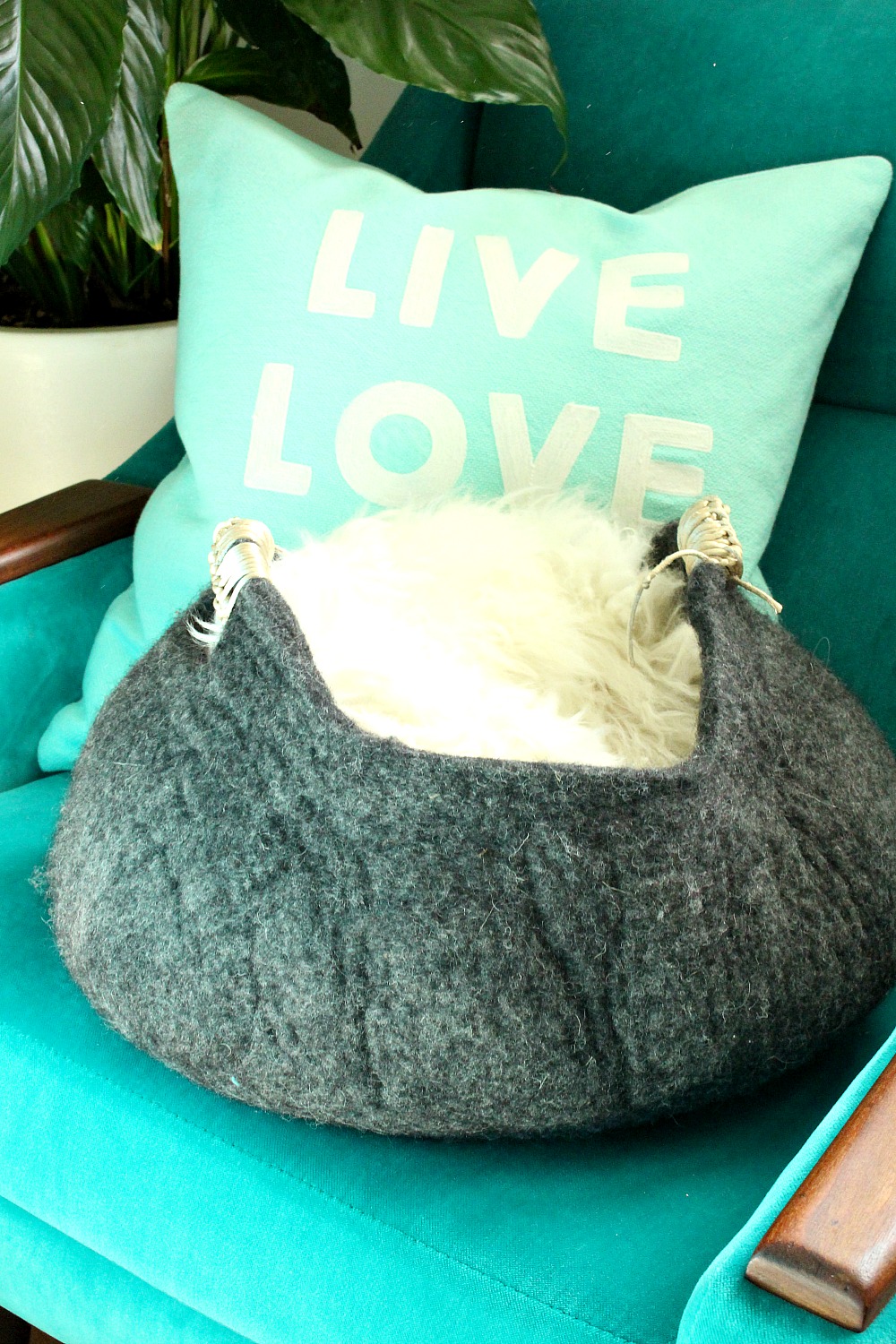 She will chew on it occasionally, but she can never do any damage, which gives me piece of mind because I worry about her teething on woven baskets and ingesting random pieces.

I never bought a harness for Szuka because I read that bigger dogs can just gain more pulling strength with one.  Instead, we opted for a gentle leader and dog training classes.  For Hynda though, a harness has worked perfectly while we teach her to walk beside us.  I really wanted a turquoise leather leash but am so happy I got a nylon one instead because she has definitely peed on it a few times so “washable” is now my favorite word.

Oh goodness, I have spent a lot of money on dog beds! 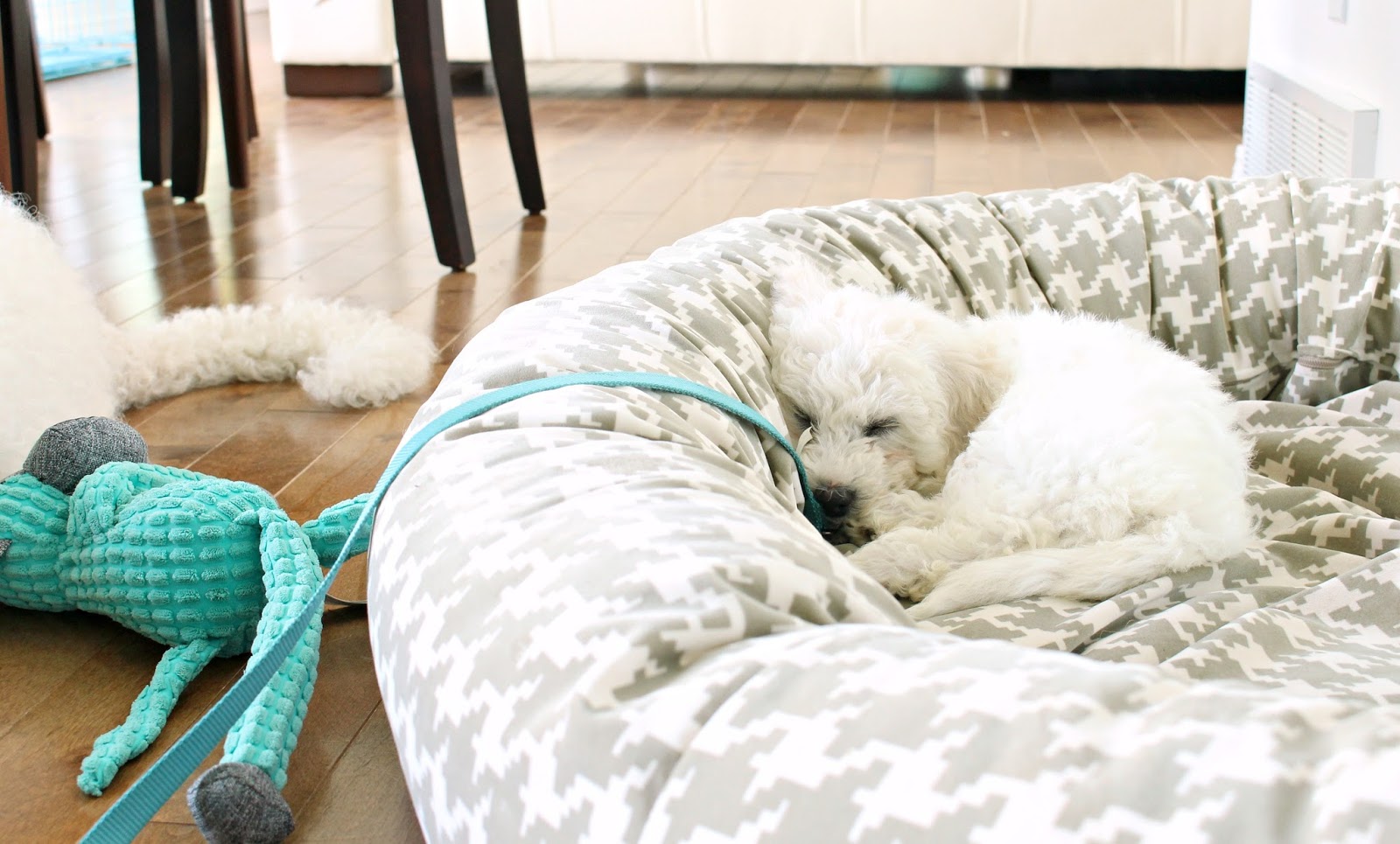 Szuka had a favorite, which Hynda immediately commandeered so I bought Hynda her own which Szuka then wanted so I bought Szuka the exact same one but larger, and now both of them beg to get up on the sofa.  PUPPIES you are driving me bonkers.  When the two of them lie in their respective, identical-save-for-the-size, turquoise dog beds, my heart grows three sizes – I love these Jax and Bones beds because the covers come off and they’re easily washed/dried. 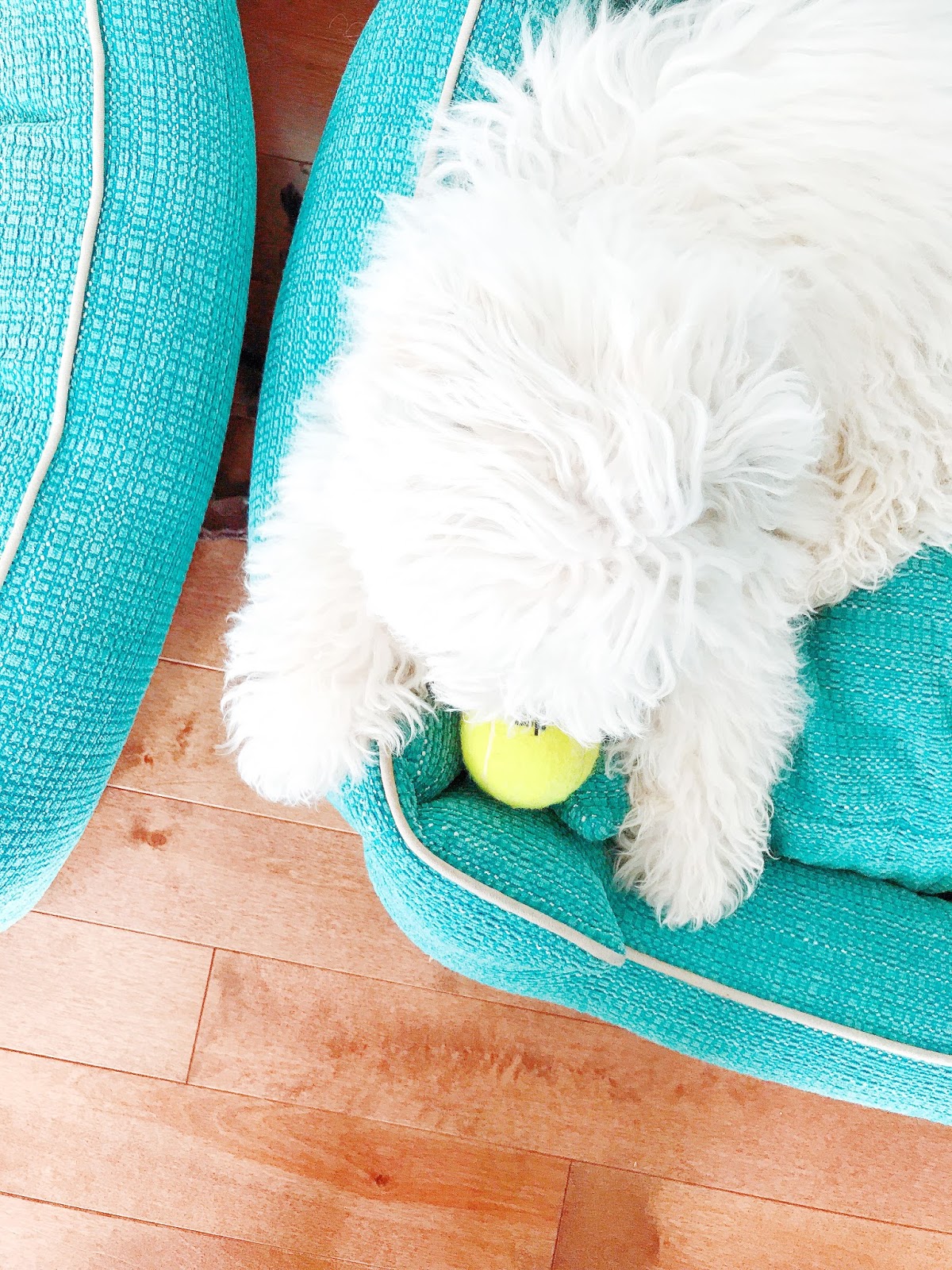 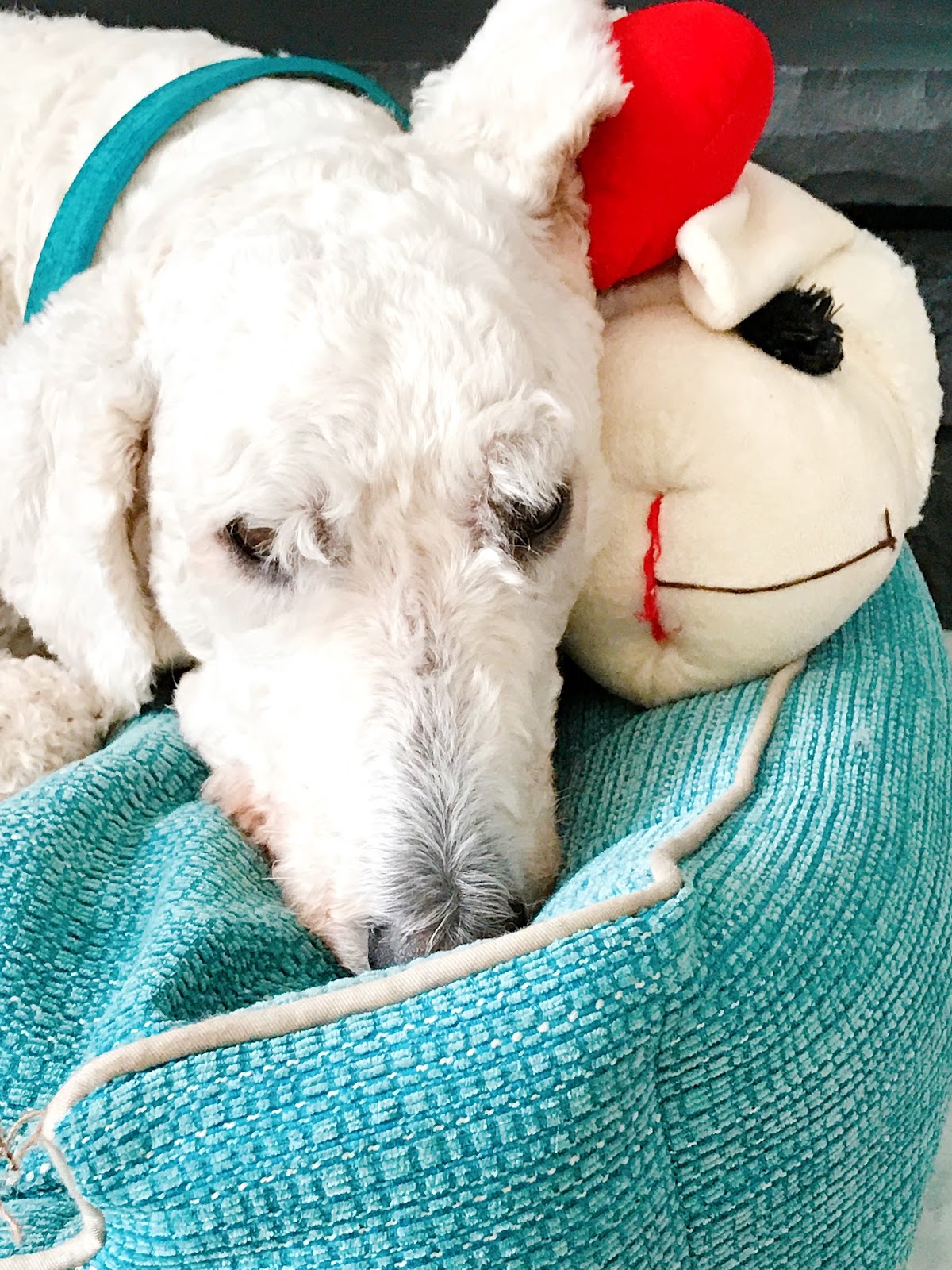 P.S. I bought a bed a bit too big for Hynda because I noticed she enjoy a larger bed for playing on – she still uses Szuka’s sometimes!  I also bought one for her crate and inside her travel crate, so I should really be buying stock in dog beds.  Oh and one of Szuka’s old beds is on the floor of her pen for some added softness.  We currently have seven dog beds in the house!  Plus we have one in the truck and one in the garage for when we’re chilling outside.  Oh and I’m saving this pretty polka dot one “for good,” lol – no idea why or what that actually means.

One of the first things I bought Hynda was a mini Kong – I have a larger Kong plus a Kong tire for Szuka and she loves them – especially when they’re stuffed with peanut butter!  I bought a few smaller toys for Hynda but she loves Szuka-sized toys anyway so now I buy them identical toys so they don’t fight over them.  They are especially obsessed with leather toys, which kind of grosses me out because I’m reminded that I let two little wild animals, who want to rip into skin, into my house.  Unnervingly, I bought Hynda this snuggle buddy toy and she immediately flipped it over and tried to tear out its beating heart…

I need a high value treat to help train Hynda and one thing both pups go nuts for is freeze dried liver, which I like because it doesn’t have any weird ingredients.  But I try to make sure I break it into tiny pieces for Hynda so I don’t exceed the recommended dosage in a day.  It definitely helped with the potty training – which was slow going – and now she only has an accident every now and then.   We still need to sign up for obedience school but I wanted to wait until she had her shots and was spayed (which just happened last week – poor thing!).

Szuka and Hynda still rough house ALL of the time and I think Szuka is still majorly jealous but Hynda is super attached to Szuka.  She pesters her and does annoying things like nip at her ankles, but she also cuddles up to her.  Szuka won’t tolerate that, though, so Hynda gets sneaky and waits until she’s asleep before cuddling up to Szuka’s tail or foot.  It’s a bit sad, actually, but I’m hoping they grow closer.  I think when Hynda calms down a bit  (hopefully obedience classes will help), Szuka will relax.  In the meantime, I am trying to make Szuka feel special and loved. 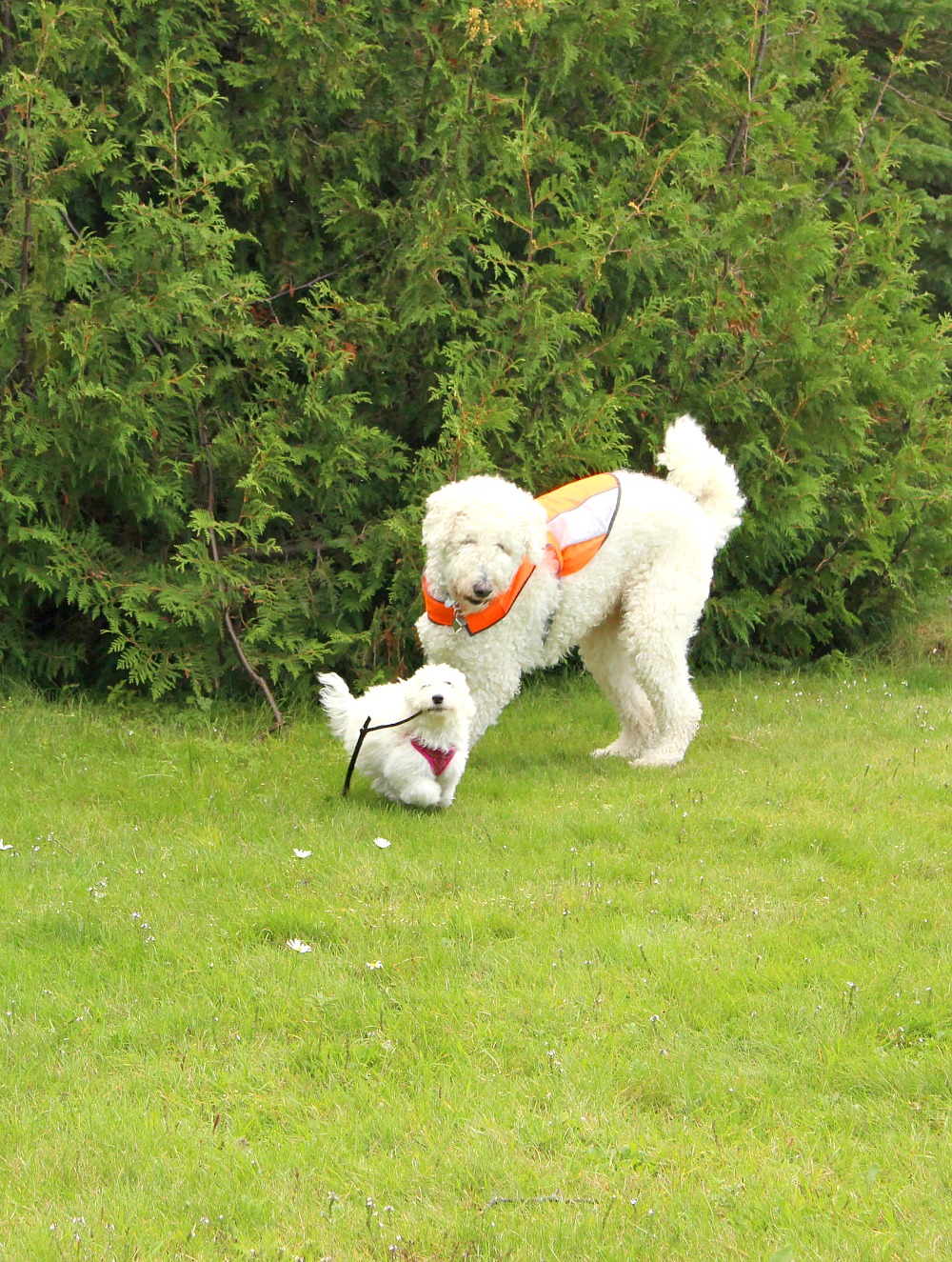 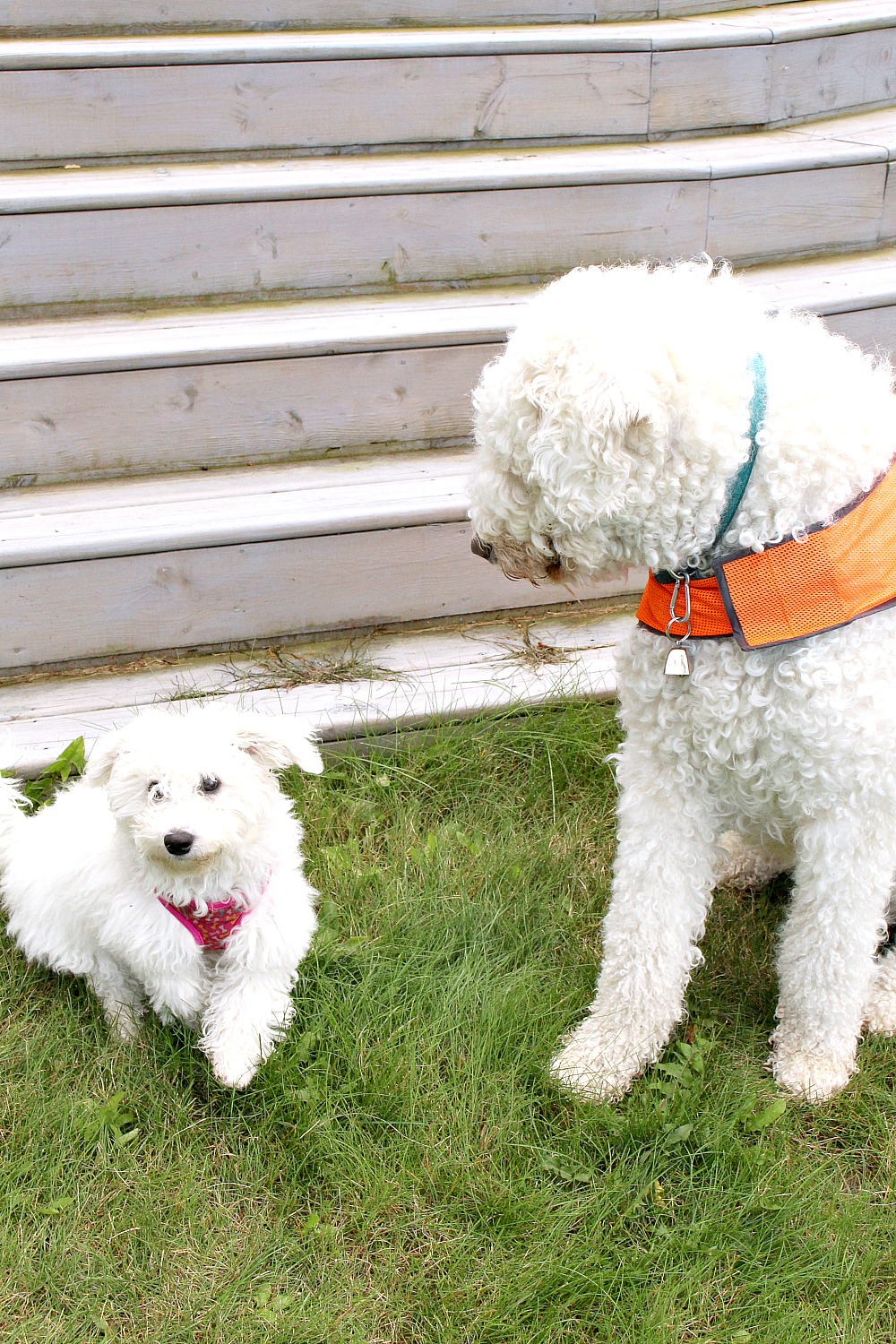 Handling these two has definitely kept me busy, so I am glad I spent on some purchases that made life easier – especially that puppy play pen!