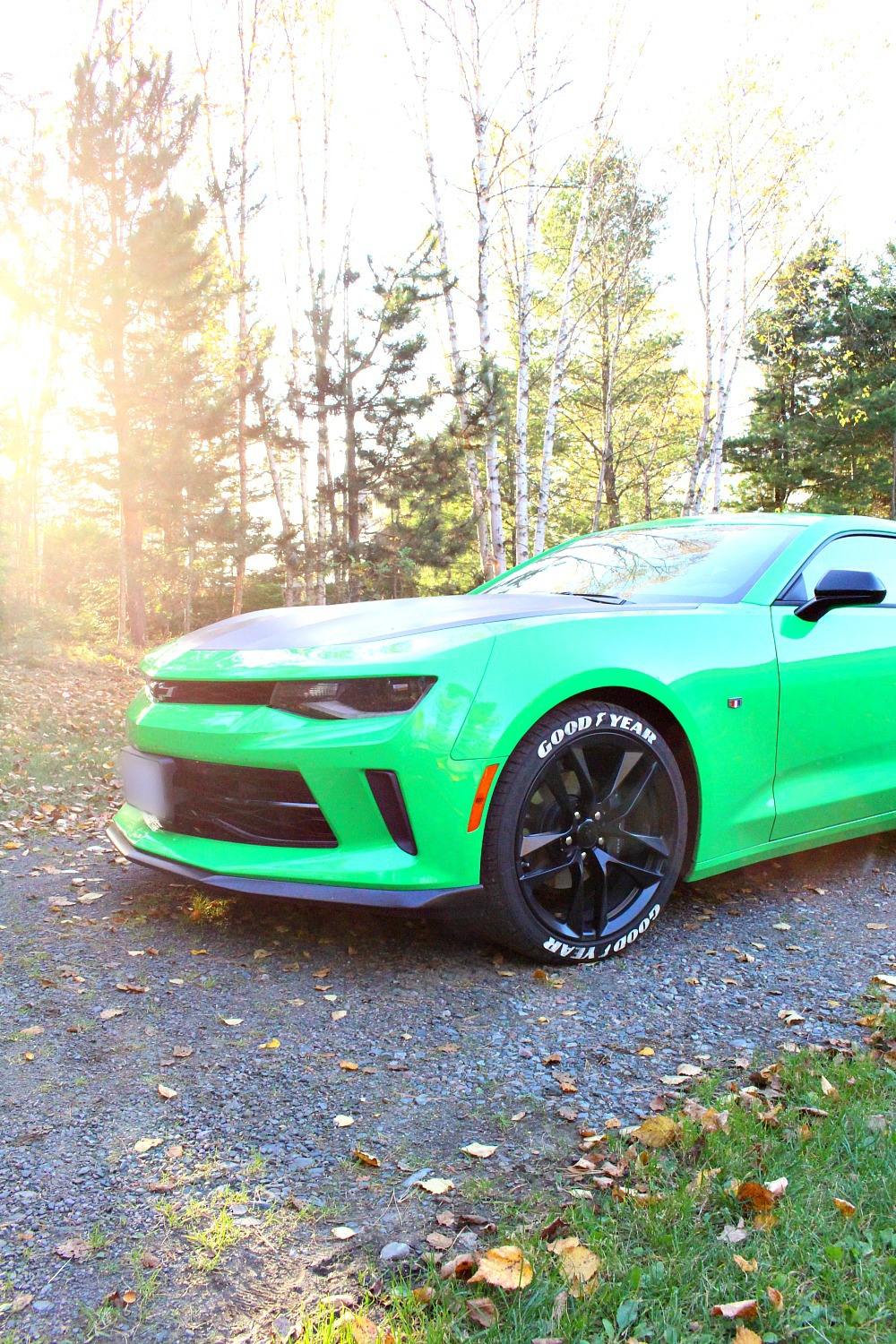 I have been keeping secrets.  SO many juicy secrets.  I’m in the mood to spill some beans so today I’m sharing a fun secret – plus it comes with the bonus of some embarrassing photos of me…

Some of you are on a first name basis with Charlie, the 1992 lime green Dodge Colt I’ve been dragging
around the province for the last 10 years.  He was my (beloved) first car. 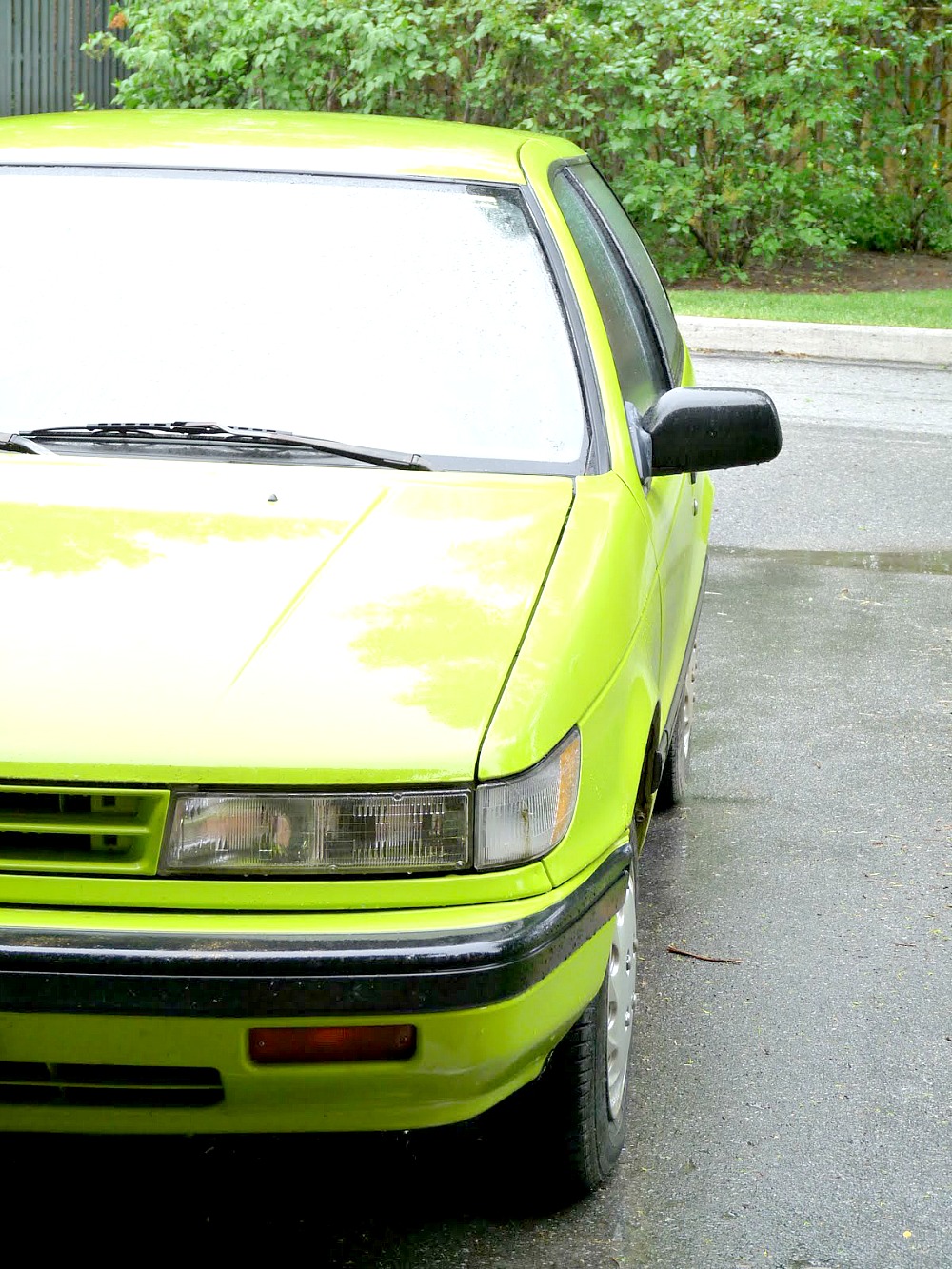 When Hubby and I moved from our home town in 2007, we thought we’d both need a car to commute to work and school, so we bought a new Nissan Versa and also drove Charlie with us.  We realized very quickly that we only needed one car and the Versa was the obvious choice because it was more reliable for driving 16 hours back home to see family.  But I couldn’t bring myself to let Charlie go!

Instead, I convinced Hubby that we should fix him up and rally race!

We lined up racing insurance (a little prematurely, lol) and brought him to my grandparents’ rural property a few hours away, having sized up their spacious garage as the perfect place to turn Charlie into a rally racer.  But we rarely did any work on him when we were visiting because we were plied with too much good food and sat comatose until our visits ended.  When we moved cities to our townhouse we moved him with us and paid to store him in a heated garage close to our house.  But we still never worked on him.

Racing plans always took a back seat to more reasonable plans, family obligations, financial constraints – boring adulting.  Eventually our rally racing dream faded and we opted for less expensive outdoor storage but I still couldn’t say goodbye because there were too many happy memories associated with him!  In fact, Handy Hubby and I were dating when I decided to paint him lime green (in my future father-in-law’s rural field). 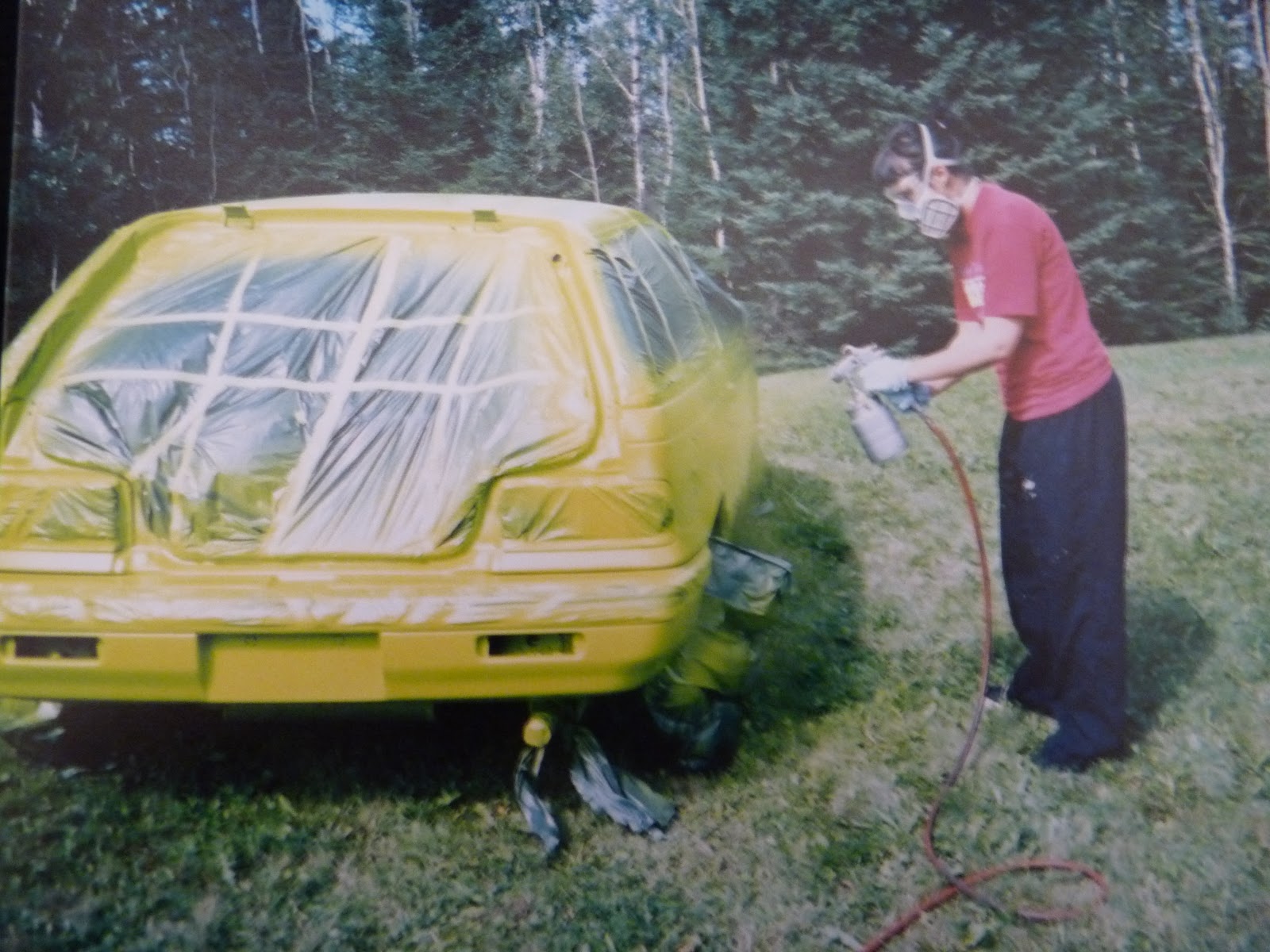 Hubby (then Buildy Boyfriend) and I hit a rough patch and probably would have broken up – if my half painted car hadn’t still been parked at his dad’s!  As we logged long hours sanding, painting, re-sanding, re-painting, and commuting to work together in Hubby’s ancient van, Hubby and I settled back into a happy relationship.  Fast forward many years and I’ve been with Hubby for half of my life (and 9 years of marriage).  I have Charlie to thank for at least some of that bliss.

Plus – rally racing!  It would surely happen someday, right?

For some bizarre reason, I couldn’t let go.  Charlie was a little piece of my past and a little promise of an exciting, adventurous future.

When we moved to the lakehouse we rented a dolly for a couple hundred bucks and hauled him behind our moving truck to our new home, where he lived outside for a year until we made room in the garage.  We finally admitted to ourselves that we’d never turn him into a race car, so I decided to make a porch swing out of him instead.  Hubby said no.  He is on board with so many of my crazy ideas, but he drew the line there.  Fair enough – I am building a giant Komondor in the backyard. There’s only so much weirdness one man can take.

I decided that I was finally ready to let him go (Charlie, not Hubby!), so we pushed him back outside but no one would come take him away for scrap, so he lived outside another year.

This past summer, I actually, finally, really did say goodbye – because we bought a brand new car! 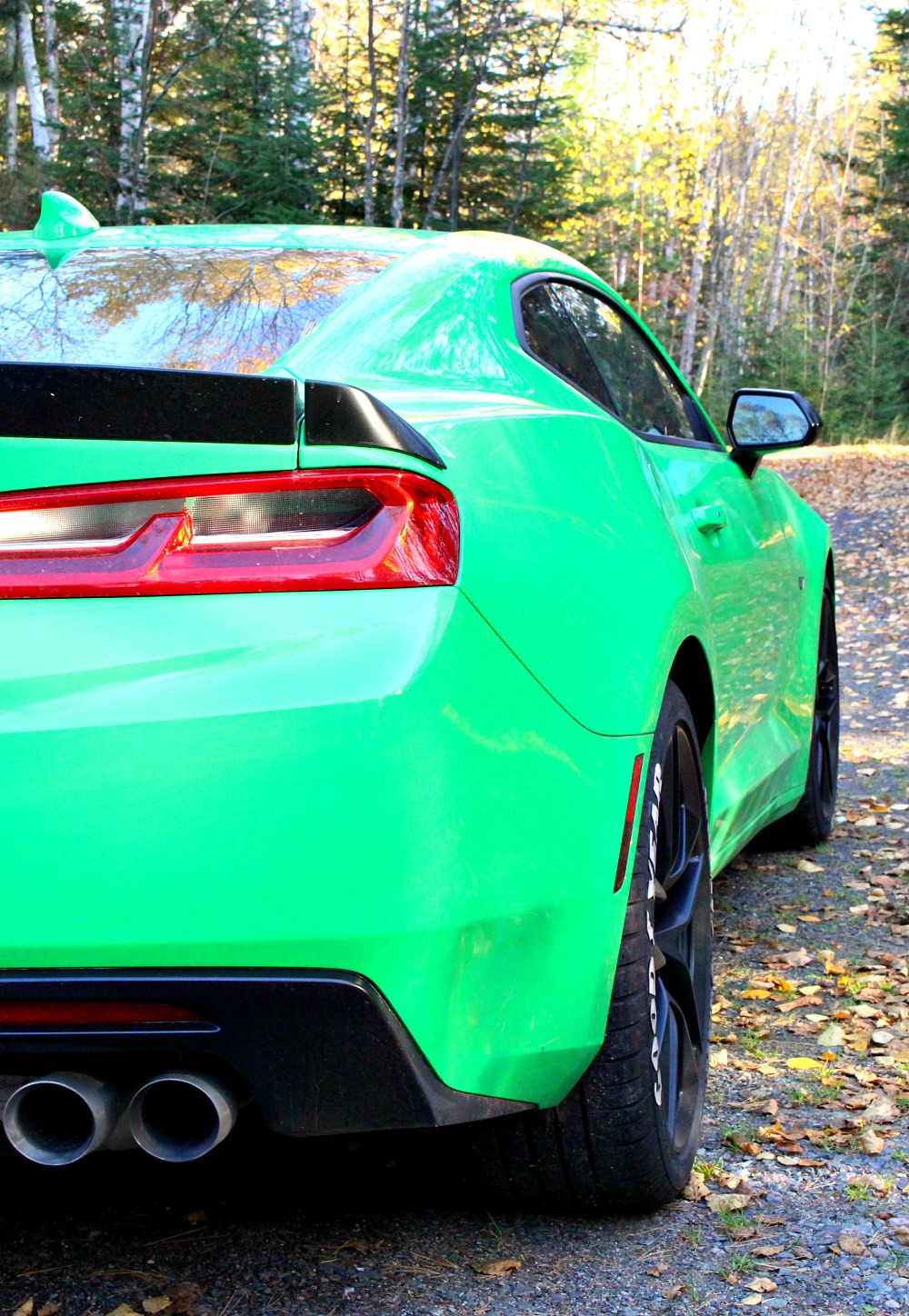 The bold, bright green was just a weird coincidence…

We had driven to Winnipeg, Manitoba for the weekend and decided to test drive some cars.  Our only running vehicle – a truck – had been giving us some troubles and had spent a lot of time in the shop, which was really inconvenient for us because we live an hour from the city.  Tired of having to beg, borrow and steal vehicles, we casually started thinking about getting a second vehicle, but I wanted something fun.  Something to race 😉  (I really don’t learn).  We were really just planning to kick some tires, but after we sat in the 2017 Chevy Camaro 1LE, with a performance track package, you could barely pry us out if it.  We ended up getting a ridiculously good deal and 0% financing.  The Universe wanted us to have this car.

A little stunned at what we had bought on impulse, we towed our new car home and decided to make use of the car hauler and finally say goodbye to Charlie. 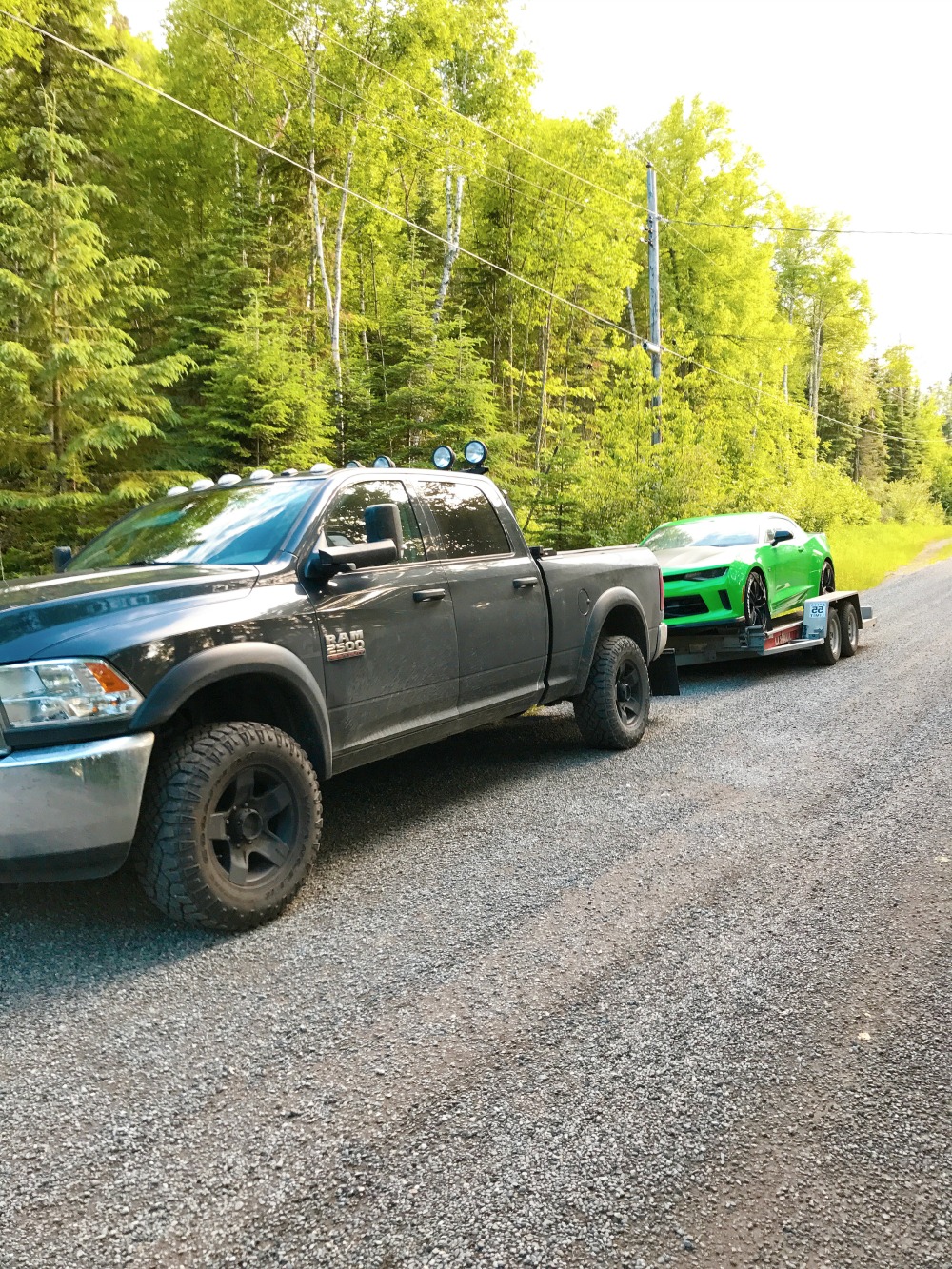 This is where the photos get a bit gnarly because I hadn’t washed my hair, body, face or teeth when these photos were snapped.  The only comment I’ll make on my clothing is to remind you that I live in the sticks and this is considered dressy out here.

I just wanted to get Charlie winched before I changed my mind, so that’s why personal hygiene took a back seat! 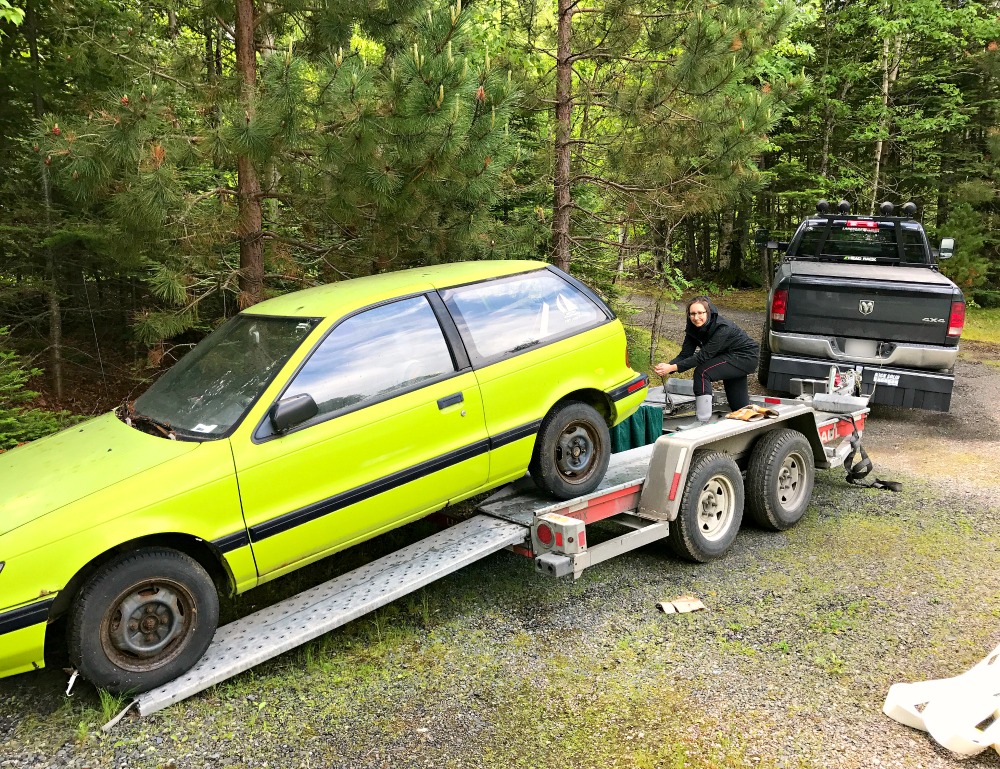 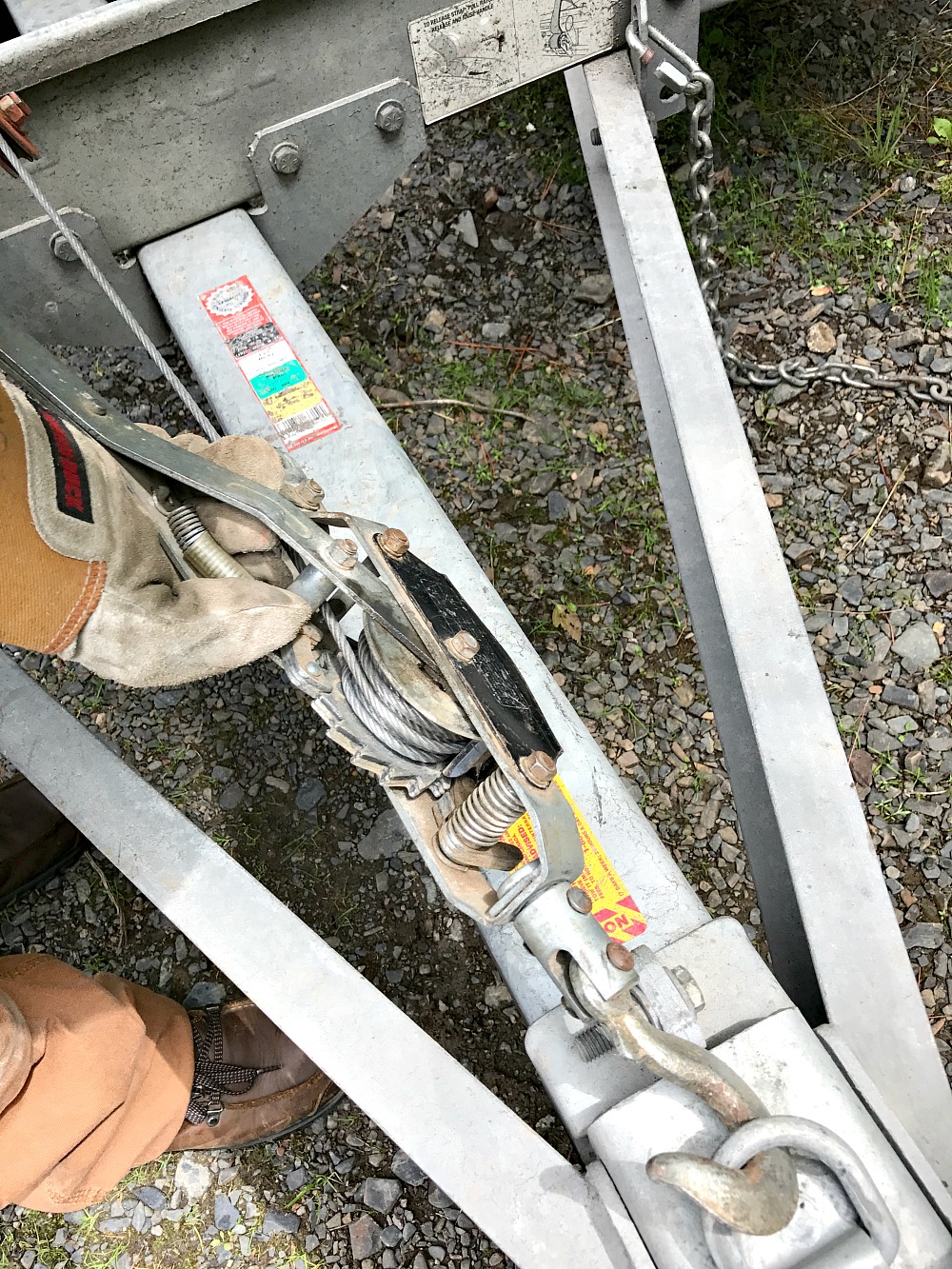 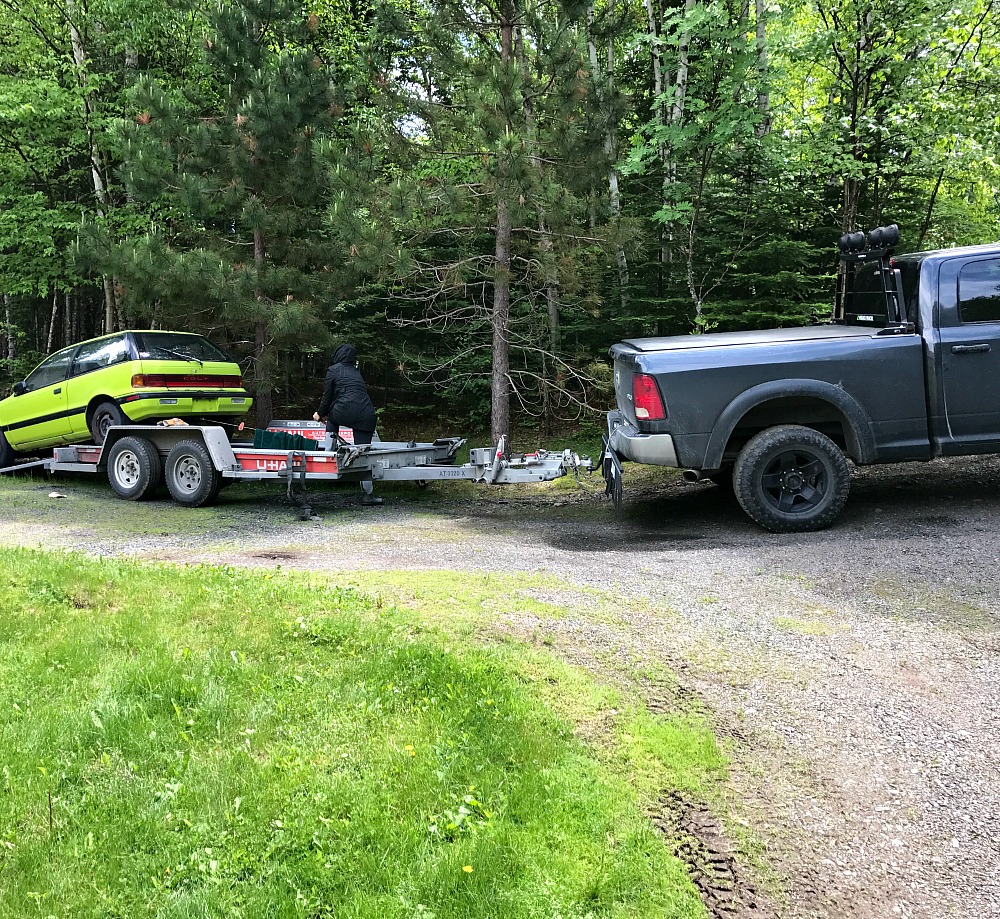 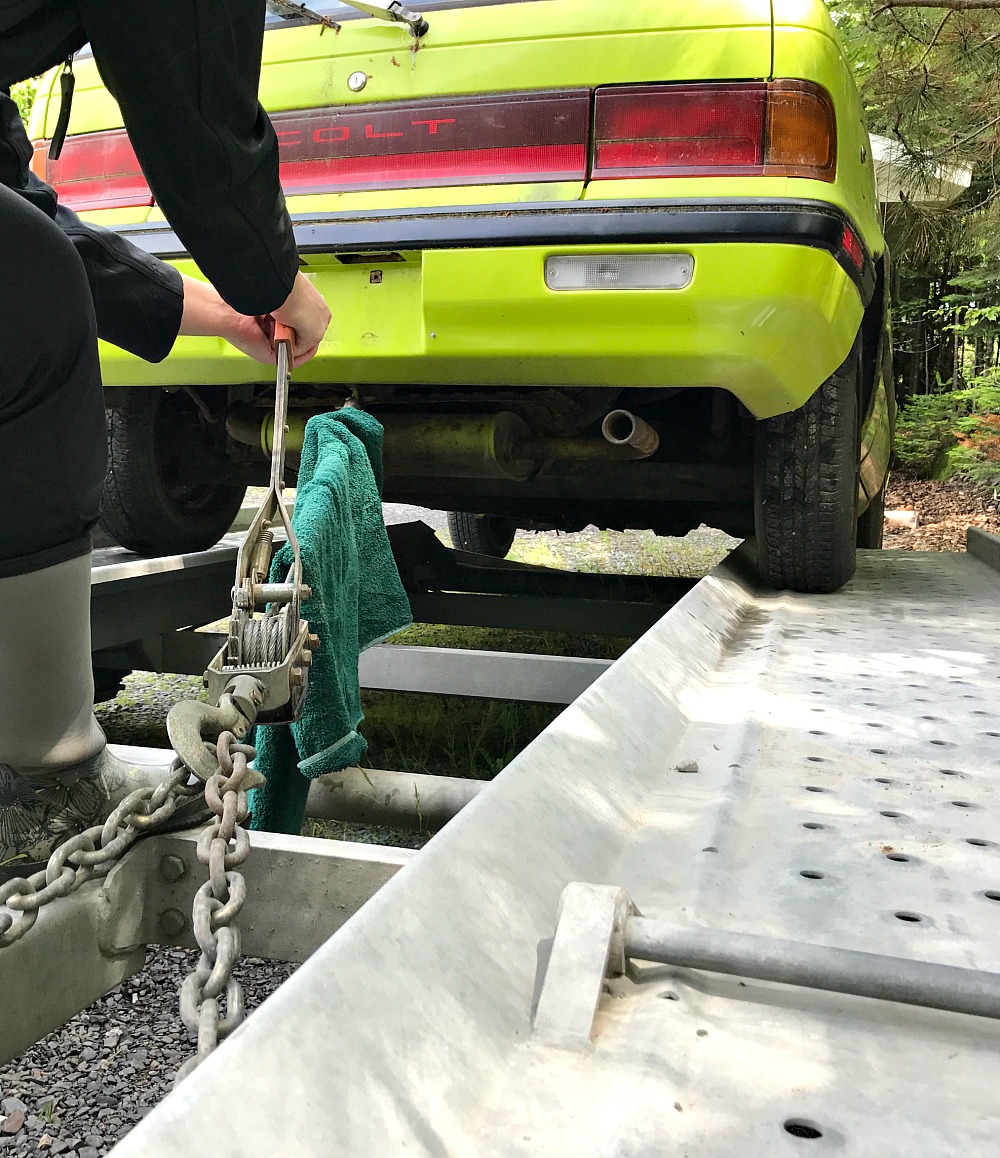 Instead of selling him for scrap, I donated him to Teen Challenge Canada.  It made it easier to let go, knowing he might be able to do some good.

I don’t know how or why I became so irrational about letting Charlie go, but I feel good that I finally did it!  We’re making new memories in our new car, and I’m feeling much more confident about my chances of rally racing.  Just read this review from Car and Driver and watch this Lightning Lap to get a sense of what this car can do!  (Plus I’ve been saving up money for a supercharger…)

Thanks to our new ride, Hubby and I spent so much time together this summer.  When we weren’t on the water, we were going for scenic drives.  Driving around Lake Superior in the fall – for no reason and no errands, simply for the pure joy of driving – was so relaxing.  We stopped at beaches along the way and enjoyed the scenery more fully than any other fall since we moved back here.

Somehow this fast car really made us slow down. 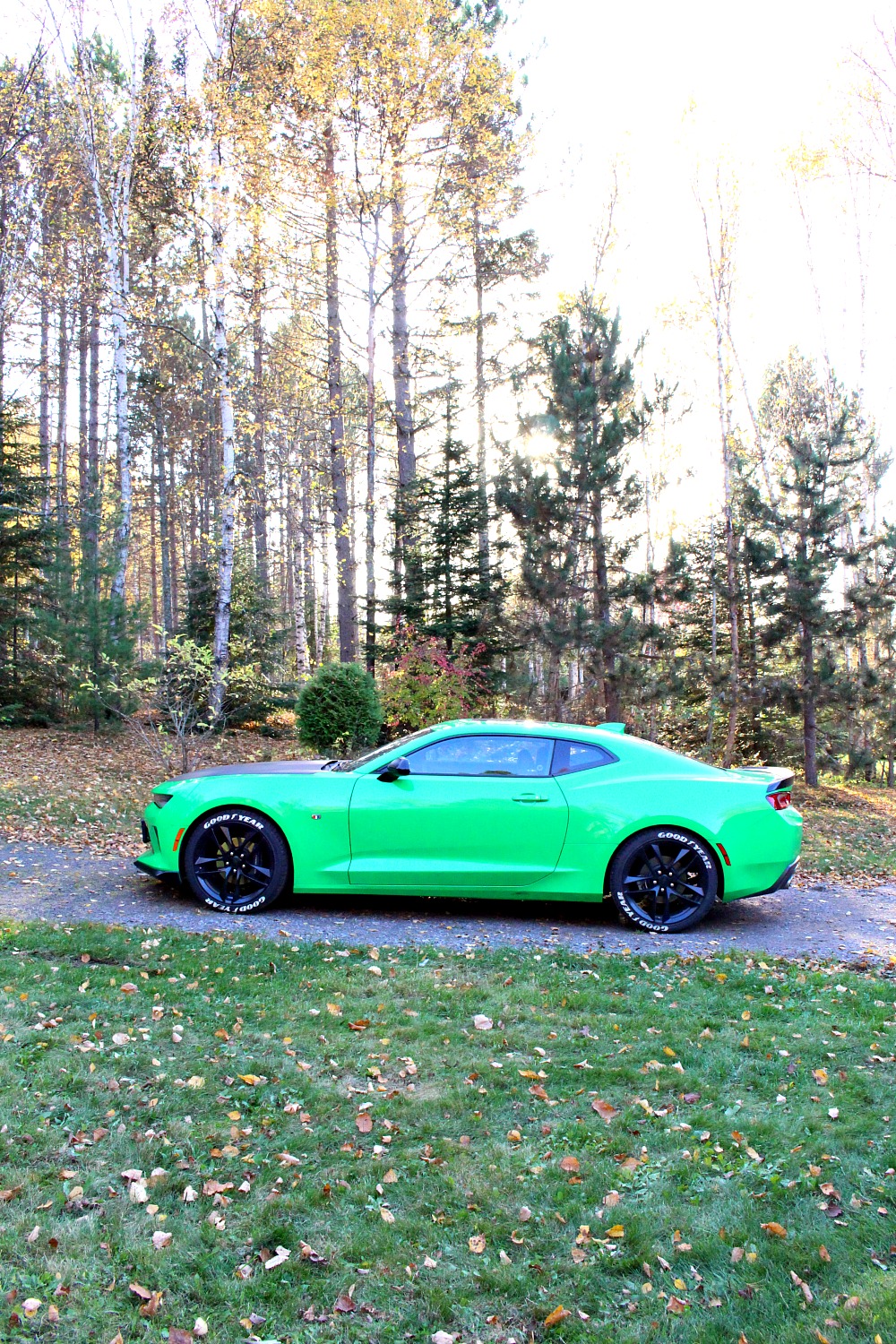 I had wanted to share the news, partly to joke about my kitchen reno being parked in the garage, but I hesitated sharing photos of our new car online because it’s so bold and easy to spot.  Then we met a few Camaro drivers who informed us that there’s tons of bright green Camaros in our city (what?!?).  In fact, family members always text us saying they spotted us somewhere (parked outside a grocery store or house) – but it’s NEVER us, so that made me feel more comfortable, knowing I still have a lot of anonymity even in such a loud car.

So if you see this car parked somewhere, it’s probably not me… once the snow melts, I’ll be bombing down back roads, looking for the perfect spot to picnic and thinking about Charlie.