When we had our stone shore erosion structure built this summer the machinery chewed up our lawn and it was looking pretty tore up from the shore up (lol), so we had to decide between sod vs. grass seed – and we tried both!  Here’s my take on the pros and cons, plus tips for getting both sod and grass seed to grow.  I’ve learned there’s few things in life more rewarding than a good lawn before/after story.  I should mention that I can’t guarantee a poop-free post.  I took a good look at the photos, but between the two pups, the foxes, the bears, the deer and a zillion geese, I pretty much guarantee there’s a turd hiding somewhere in these photos.  So if you’re at your desk eating, say, an Oh Henry bar and enjoying a hard-earned coffee break, you might want to either save this post (or the nutty chocolate bar) for later.  But you’ll definitely want to keep reading at some point because I grew things, and it was incredible… 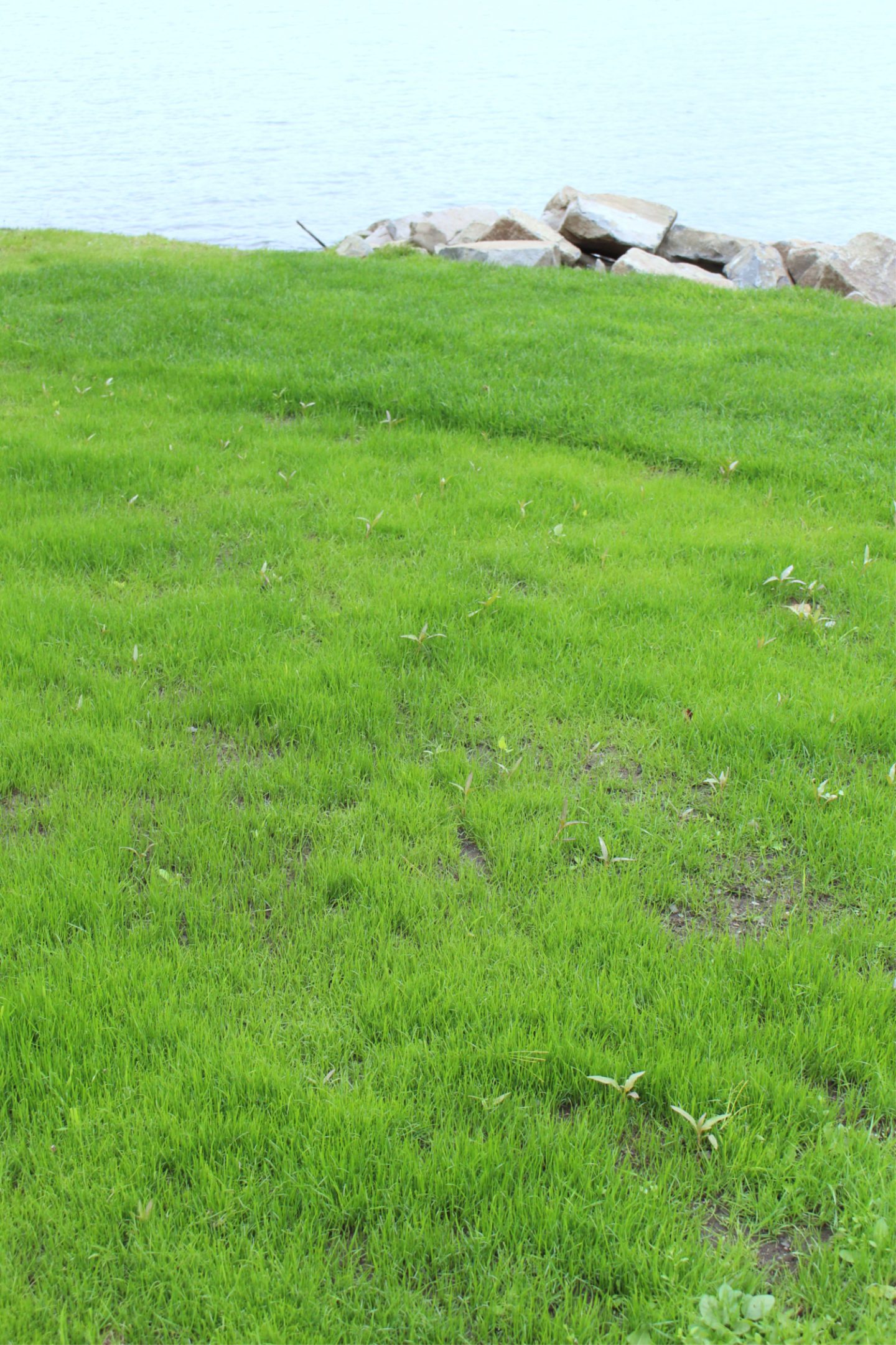 Here’s a look at our yard after it was shored up (I’m on a roll): 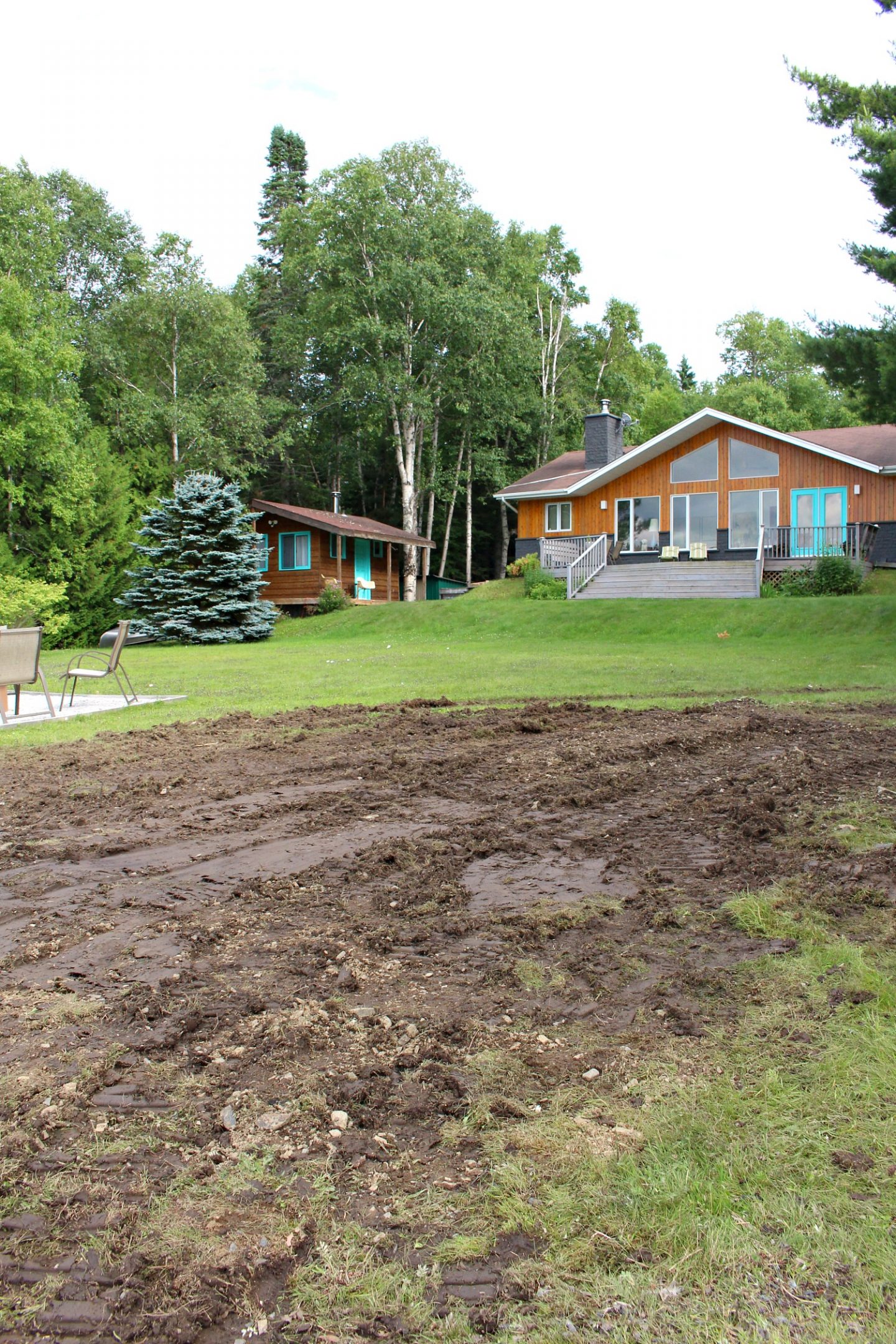 The company we hired to save our shoreline from erosion smoothed out the mess when they were done (thank you!), and then added a layer of top soil to help restore our yard and prep it for sod and grass seed: 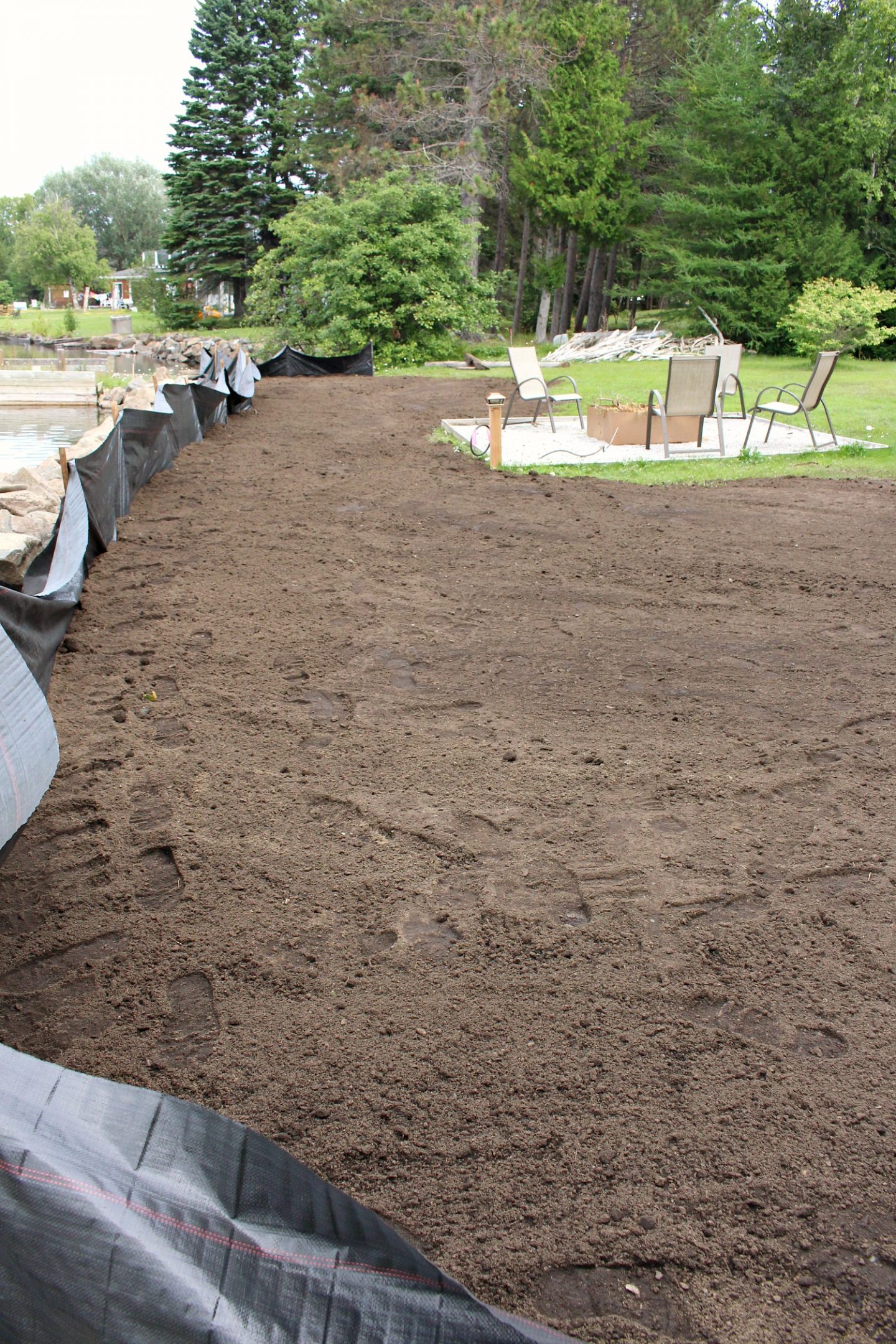 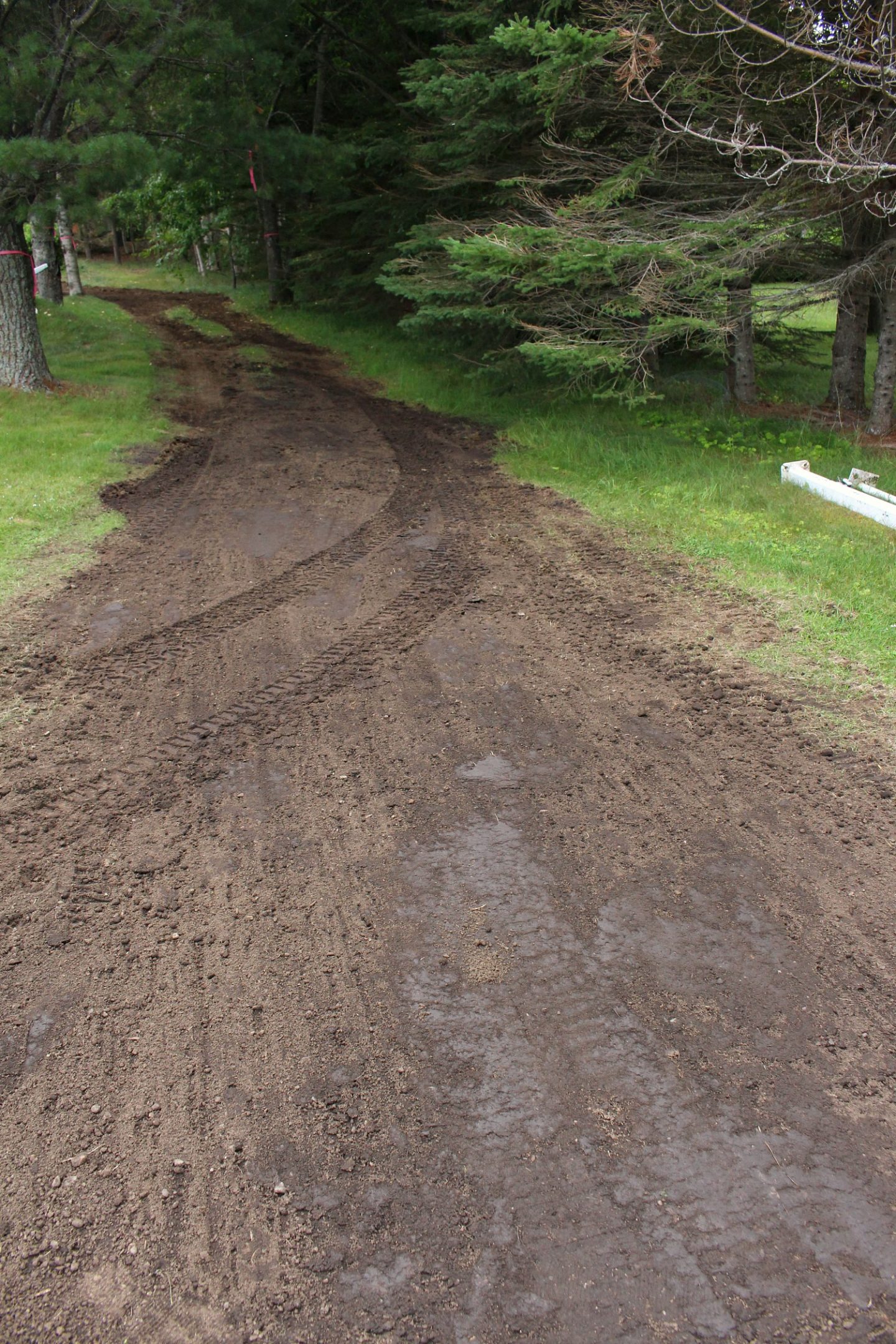 The doggies LOVED our new dirt lawn and dirt path.  They were super bummed when we covered it up because neither of them like the feel of grass on their feet – they will both pee on the gravel driveway from time to time, or stare at the deck longingly.  Hubby and I were not fans so as soon as the prep work was done, we drove straight to a sod farm.  We were advised to lay at least one strip of sod along the shore’s edge, to keep the soil from seeping in to the lake.  We bought a palette’s worth of sod and that ended up being a few rows (pretty much up to the fire pit edge). 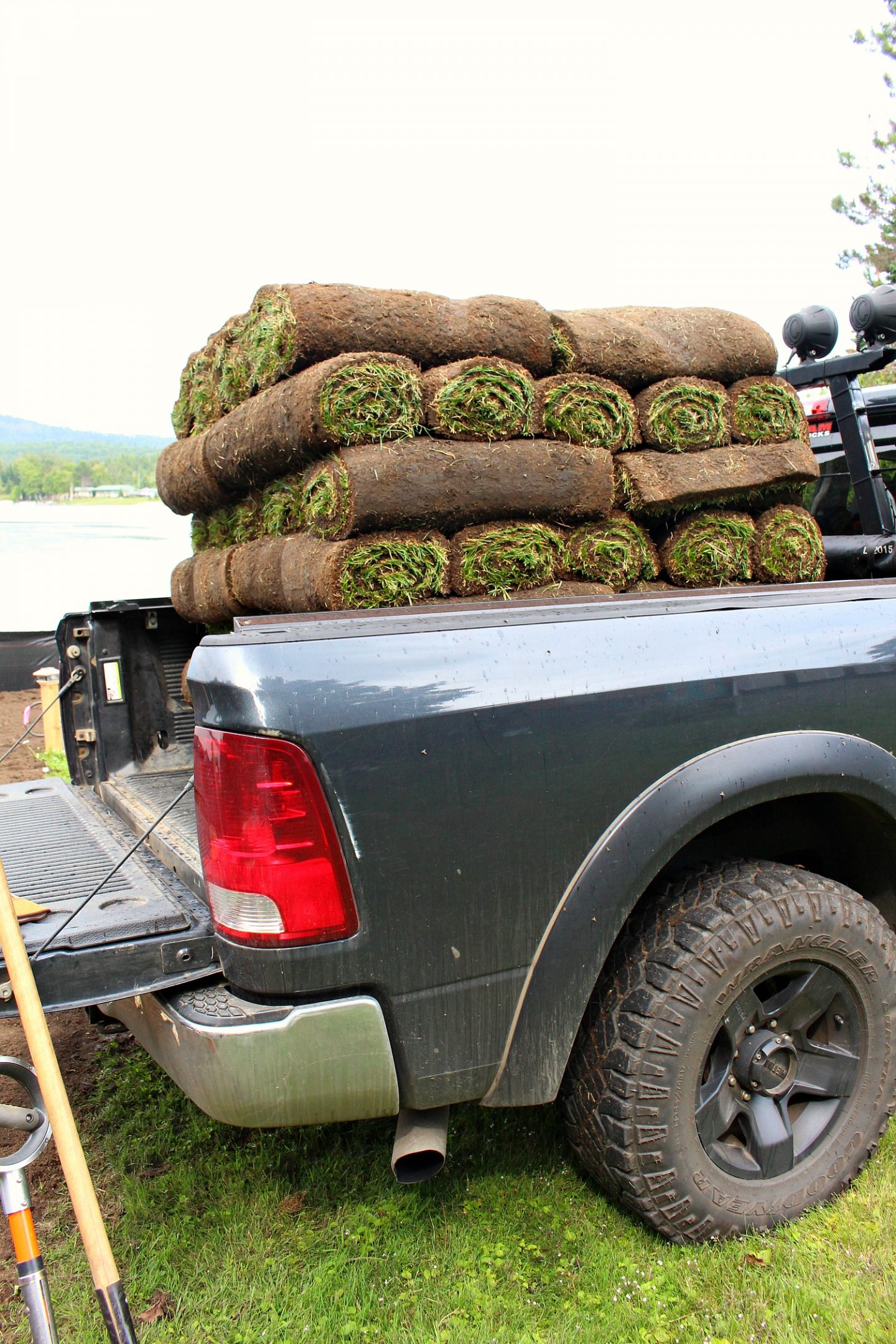 Here’s my best tip for sod: get it fresh from the farm.  The sod farm we called was so serious about the freshness, they wanted to know the exact minute we’d pick it up, so they could time removal of the sod perfectly.  It wasn’t enough for us to say, “sometime today” – we had to commit to a time within the half hour.  As a result, the sod we got was fresh and that’s what really helped it take, so skip the big box retailers, rent a truck if you need to, and go for a scenic drive because it’s worth it to get your sod fresh from a farm.  Before laying the sod, we also sprinkled some fertilizer onto the top soil, which we picked up in bulk from a local farm supply store (perks of living rural). 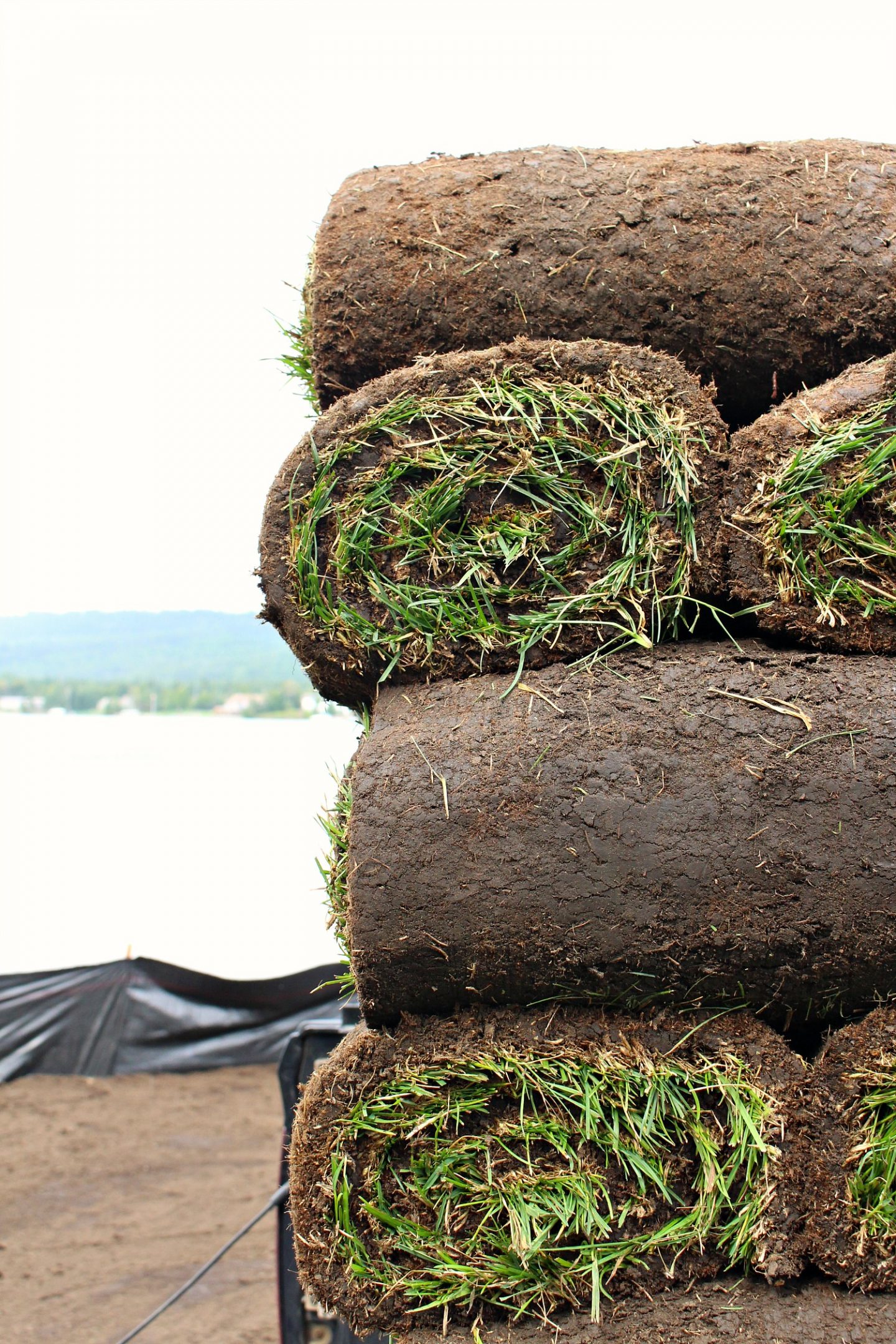 The sod was heavy and wormy, but we worked together to lay it, staggering the seams.  It was not easy work and we were both exhausted and super dirty after.  I think it took us a few hours to lay a few rows, but I divided my time between working on the sod with hubby and mucking around with our rock wall, adding some pieces to hide the fabric underneath.  I had to stand knee deep in the lake, which was SO cold (plus I found a leech), but hubby touched more worms, so I’m not sure who had the worse job.

Once the sod was laid, we diligently watered it (lightly – not to the point of getting it soaked), three times a day, and kept puppies and humans OFF the lawn – which was no easy feat!  Get off it, you monkeys! 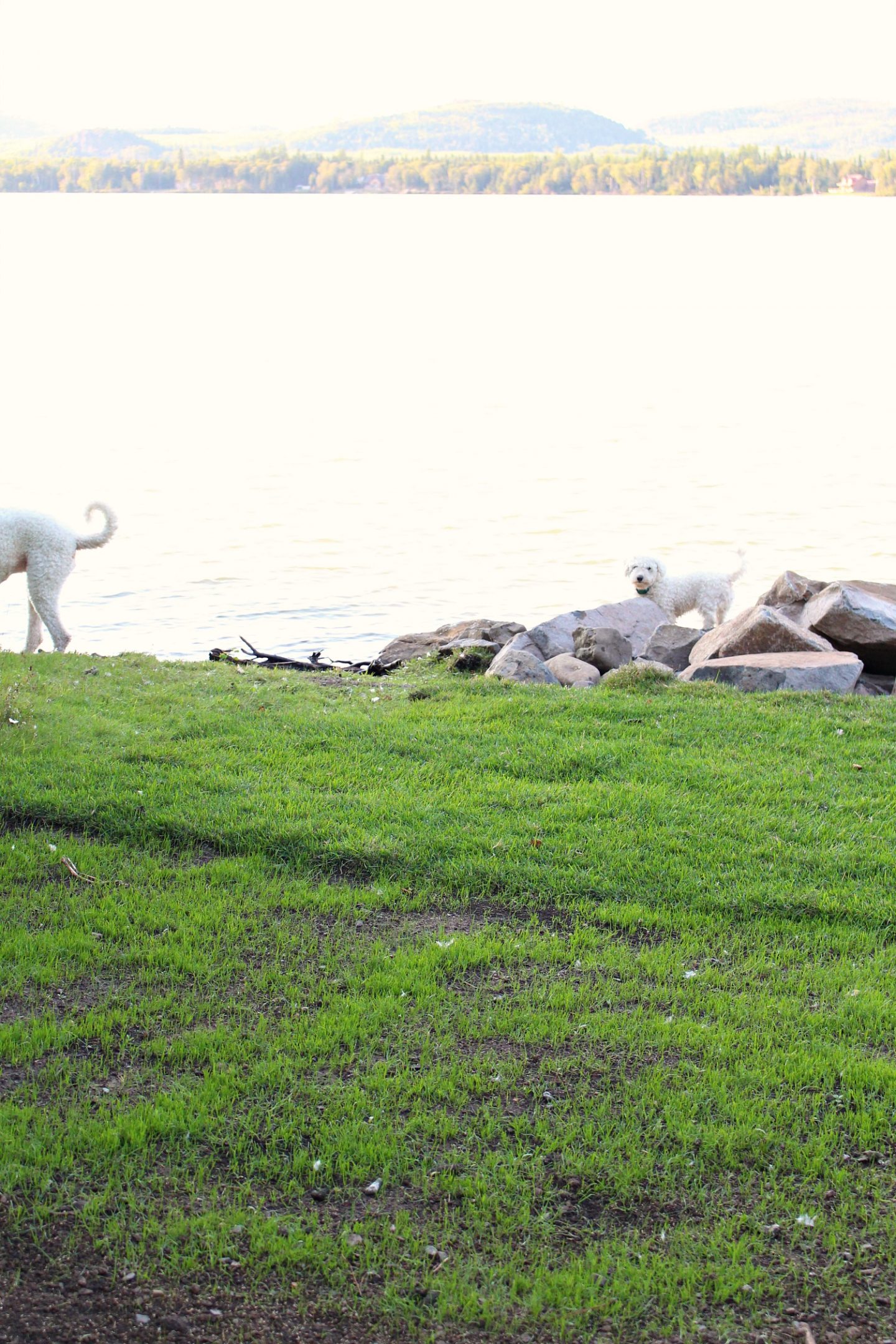 When it comes to sod vs. grass seed, I really wish we could have afforded sod for the entire lawn, but that pallet of sod pictured, 70 rolls, was around $250 (although I got $30 back when I returned the pallet).  We were able to re-grass the same area for about $35 of grass seed (a 40lb bag is only $50), but the waiting was the worst!  Sod had that thrill of being almost instant, immediately hiding a chunk of our dirt lawn.  Really the only downside was the the manual labor (we needed the exercise anyway), the cost (why do things have to cost money), and the effort to get it (but luckily we have a truck just for this kind of thing). 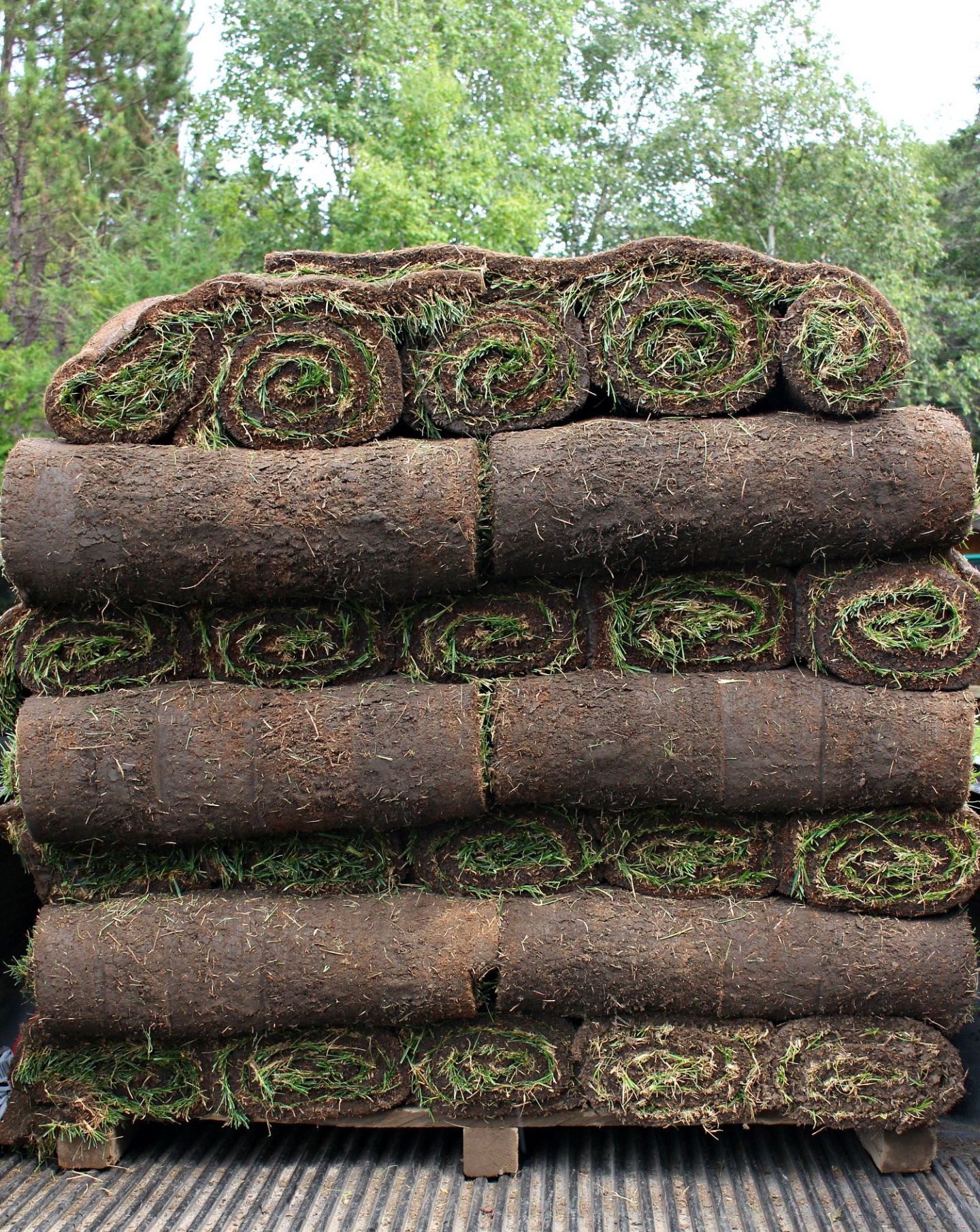 For the rest of the dirt heap we used grass seed, which was much cheaper and way easier to bring home – I got a lot of weird looks pulling my Camaro up to the rural farm supply store where I bought the seed, haha.  Just like with the sod, we fertilized first (with those little pellets, something like this, photographed below), then I raked the soil to loosen it up and work in the fertilizer, and then we sprinkled the grass seed (bottom of the photo).  After it was sprinkled, I raked a bit to help bury the seeds (no more than 1/4 inch of soil) – although flocks of birds still stole some. 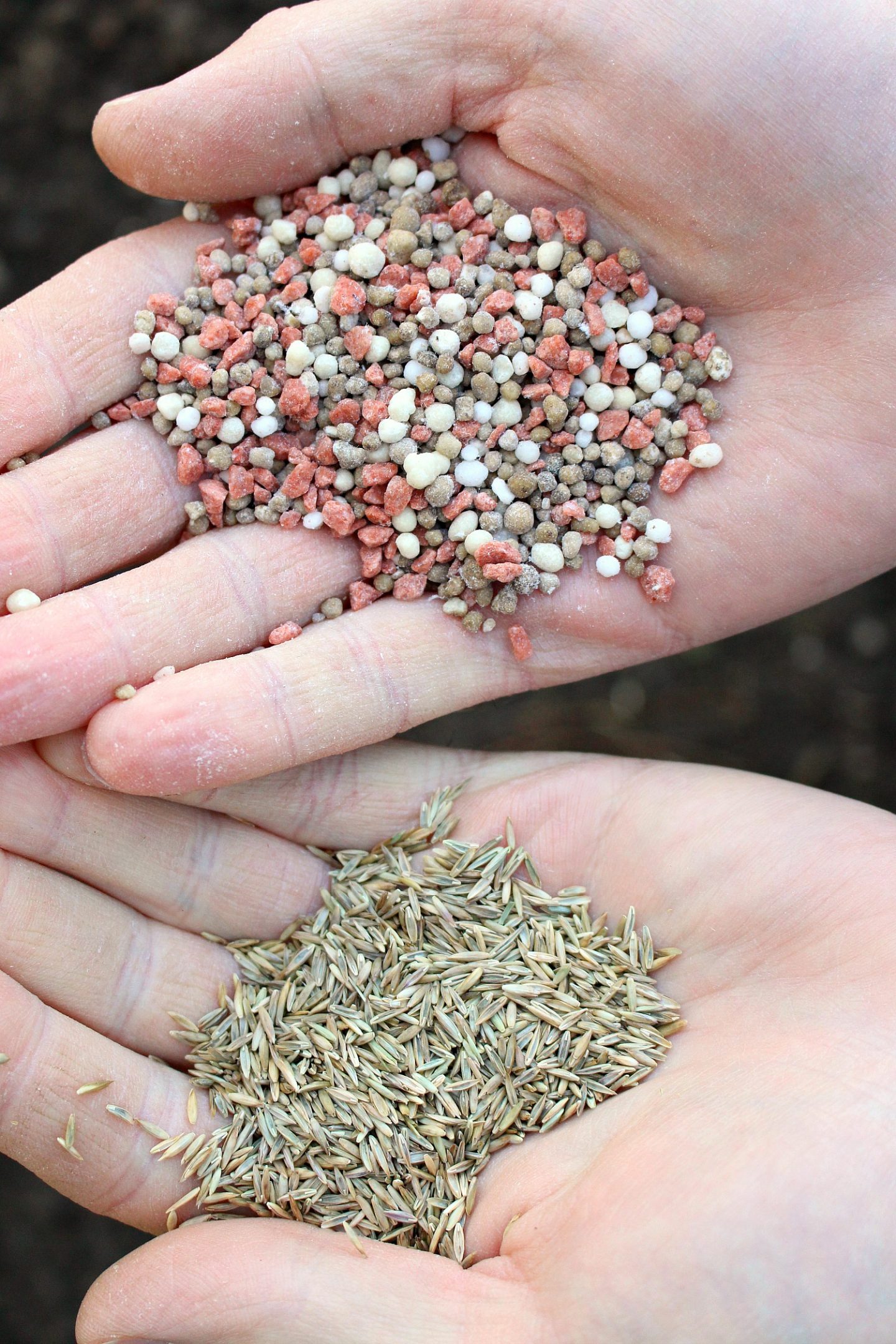 I watered the grass seed three times a day, watering lightly as opposed to soaking the ground, and eventually little blades of grass began to sprout.  A couple of months later and it’s still patchy but it’s grown in quite a bit (we have not mowed it at all).  Once we saw that the grass seed took (I was doubtful), I bought more and have seeded up the path along the side of the property but that’s less willing to grow because it’s shady and the pine needles fall and choke the growth a little.  I am probably also a little too late in the season – I might have had a better chance if I had planted all of the grass seed at once.

The photo below shows the growth after about 2-3 weeks.  You can see what I meant about sod vs. grass seed and the waiting being the worst with grass seed – you really need patience.  I was watering diligently but then our well ran dry so there was some time that I couldn’t water as dutifully, that might have stunted the growth: 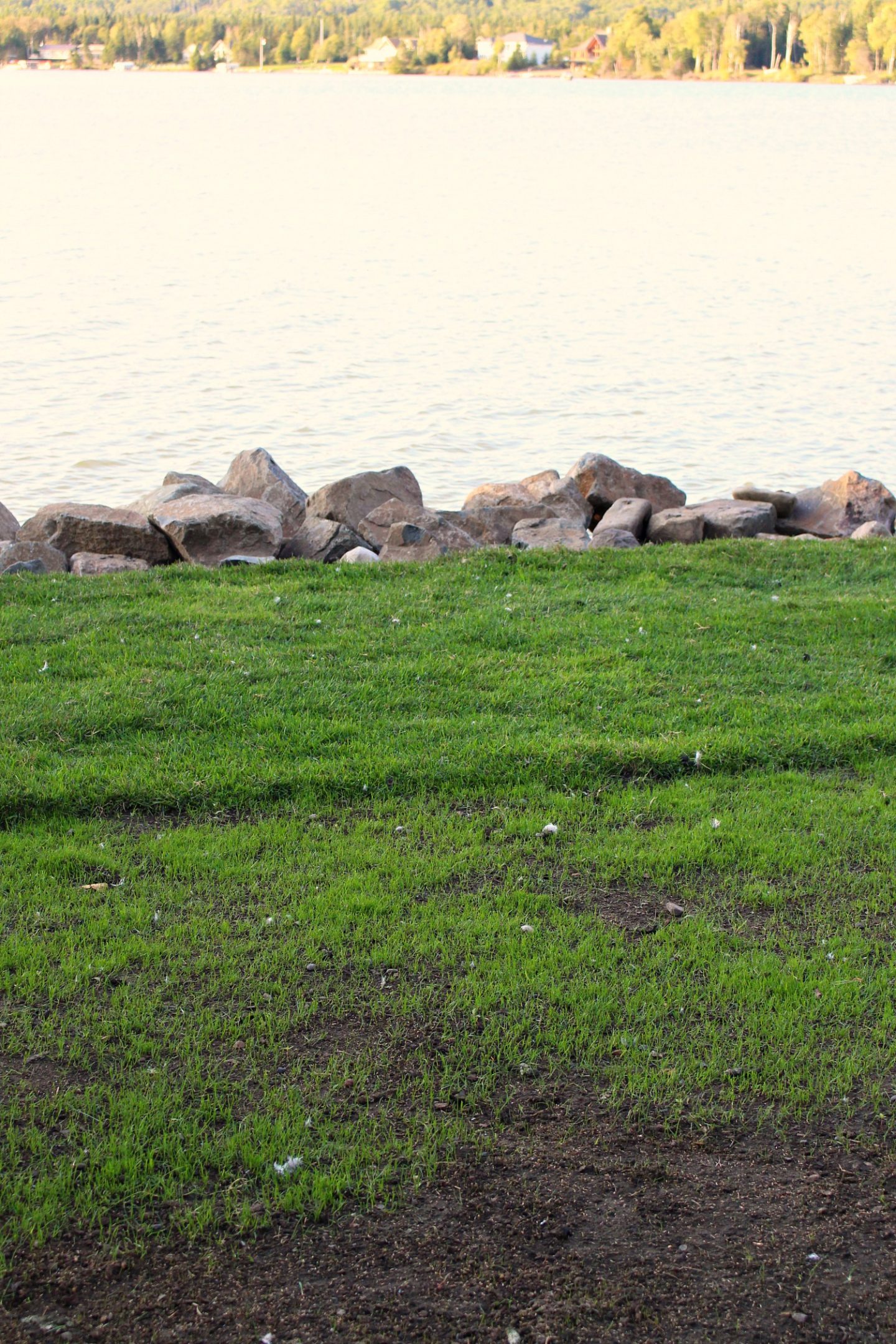 Here’s a photo of the lawn, a couple of months later, after a period of heavy rainfall:

You can see a line in the top third of the photo where the sod is noticeably more lush and the grass is patchy but still – I’m so proud of this grass that I grew!  If you’ve been following Dans le Lakehouse for any length of time, you know that I do not have a green thumb.  But this summer my orchid flowered, my outdoor container plants stayed leafy until the first frost, and I grew grass from seed.   So I guess I should add that, when weighing the options of sod vs. grass seed, there’s a certain satisfaction that comes with growing a lawn from almost nothing.  I also have a new appreciation for farmers! 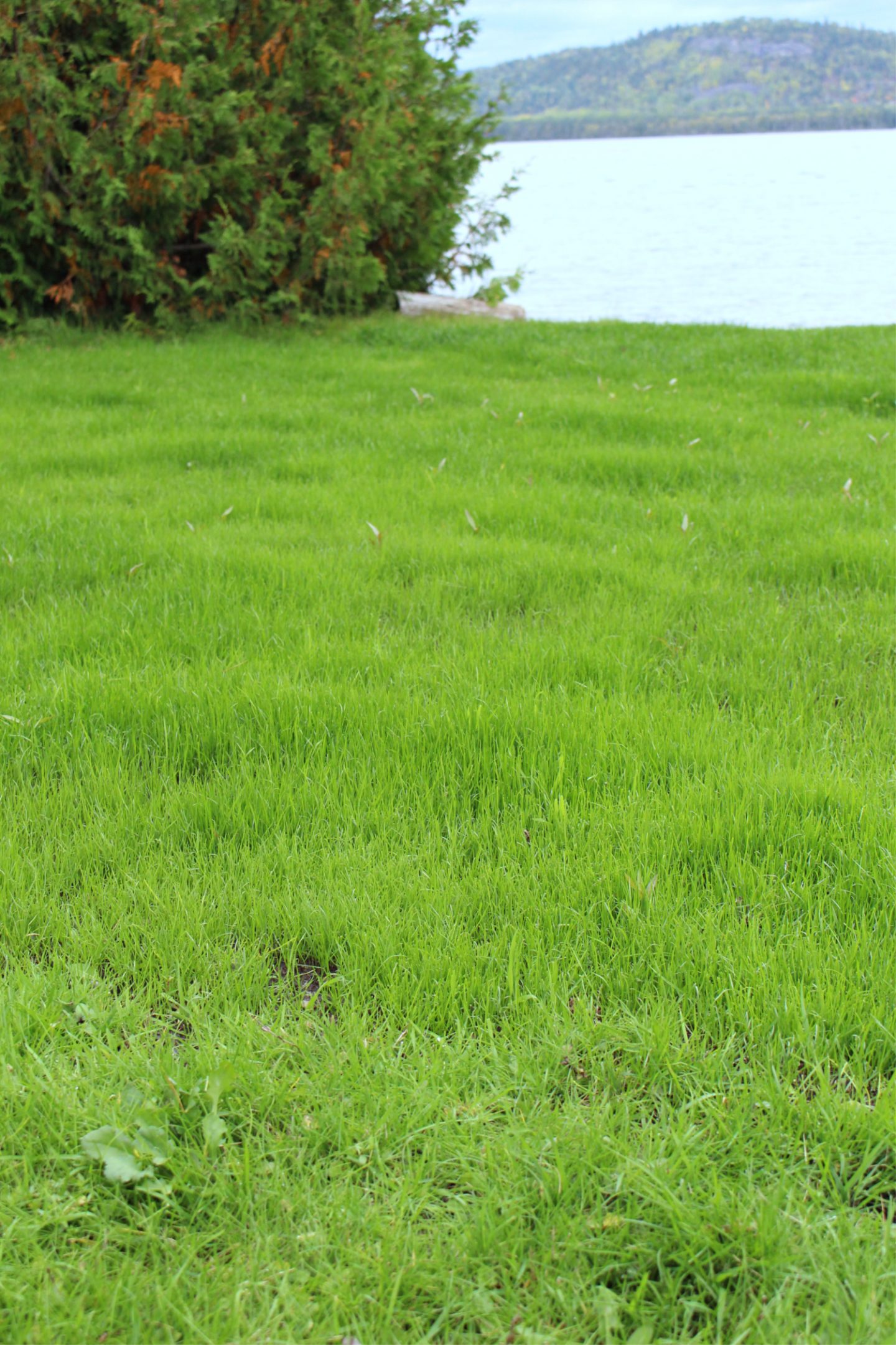 My best tip for grass seed: try to actually “plant” the seeds as best you can because little creatures will steal them.  Also, buy from a farm supply store if you can because you’ll get a great deal in bulk and they can help choose the right seed for your soil/location – and buy extra, because you can add it to patchy areas if it’s not seeing growth there.

SOD VS. GRASS SEED – WHICH IS BETTER?

So, having tried both, which would I recommend: sod vs. grass seed?  I would totally pick sod if I could afford it – or I didn’t want to look at a dirt yard for too long.  We had tried grass seed in the townhouse and nada, so I wasn’t hopeful.  But I learned that the grass seed was effective, easy to bring home, way more affordable, and it was a good experiment because I’d like to seed some other areas that are patchy (ahem, thanks puppies).  I think that next year, with some strategic seeding, I might finally have a nice, lush lawn! 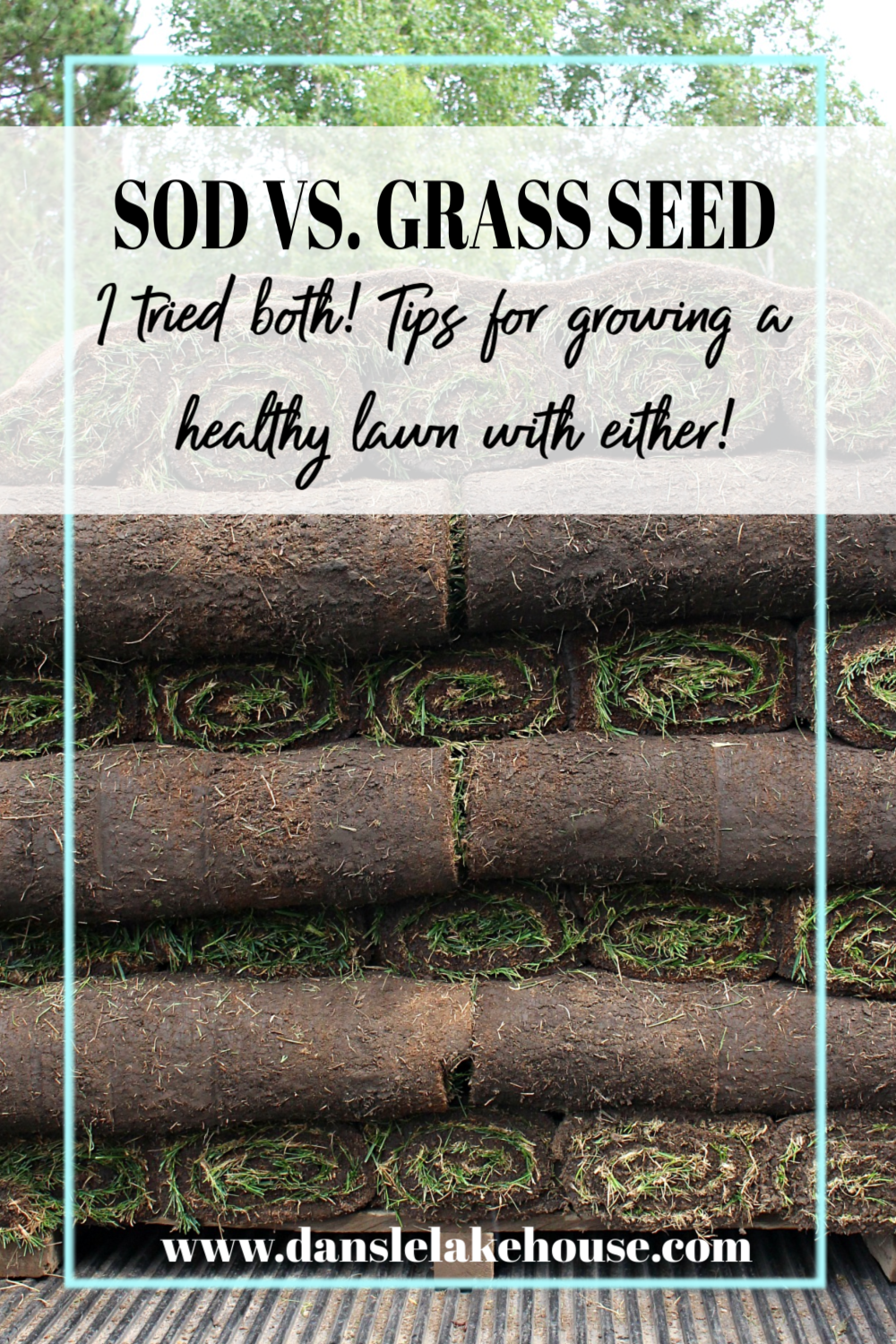 I hope this was helpful to anyone consider sod vs. grass seed but I’ll be honest: I literally wrote this entire post just so I could use the expression “tore up from the shore up” 😀