Our well ran dry.  This has happened before but this times it’s worse.  A few years ago we had very little snow and really cold winter temperatures, and we think that without the insulation the snow provides, a cold snap froze our source of water.  We went without water for a bit, then had water delivered and things seemed okay.  It happened in March, so it was the tail end of winter – we were lucky!  But then this past winter we had chronic water shortages and I was running outside in the snow every day to measure the well with this big long stick to figure out if I could do laundry or wash dishes that day.  It was super annoying but we got through it.  Then the spring run off turned our well water really brown so we had the water tested (we do that a few times a year anyway) and the results came back unsafe to drink, due to high levels of E coli and Coliforms (which is bad – it indicates feces).  I actually got pretty sick from it before we realized there was a problem.  We changed the UV light in our water filtration system, shocked the well, cleaned out more parts of our water system.  For months we tried to fix everything we could think of but nothing worked.  The tests either came back as too overgrown to test or unsafe to drink.  We thought maybe our septic system was leaking (ewww) but then we heard from neighbours who had the same results as us so we postponed poking around in the septic system until next year, when we really need to have it pumped out anyway.  (So much ick).  We resigned ourselves to buying drinking water but then, earlier in the fall, the well ran completely dry.  We were stunned because this has never happened in the summer. 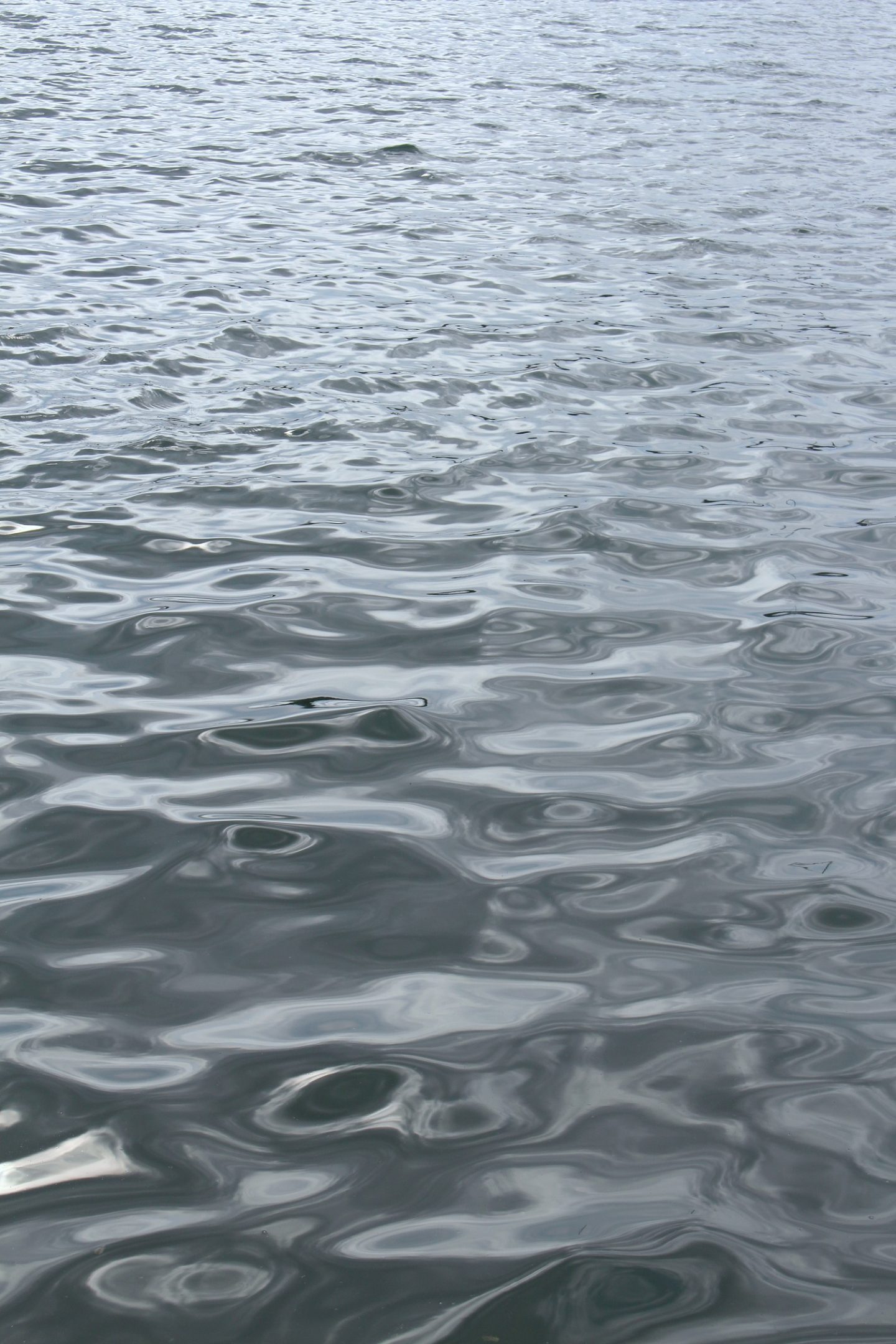 We finally called in a well specialist with a massive beard who delivered some epic bad news.  Apparently water moves in cycles and we’re coming off a seven year period of high water tables but now we’re going to enter a seven year period of chronically low water.  He said he wouldn’t be surprised to learn that our well was dry ten years ago.  And he said he wouldn’t be surprised if we struggle for water for the next decade.  I forgot to ask if the locusts were coming next.

The solutions are not fun:

Since we’ve been spending our money on exterior renos (new roof/windows/siding/shore erosion) we definitely don’t have $30,000 kicking around and even if we did, we’re on the fence about what to do because none of the options guarantee us water.

We decided to weigh our options over the winter and we’ve asked around to see what other neighbors do for water.  We saw one household pumping water from the lake last winter, so we know we’re not alone in this water shortage.  We also heard that two or three other dug wells ran dry, so I’m worried that if everyone starts drilling wells then we might all end up with empty, expensive drilled wells.  Some neighbors have successfully pumped water from the lake all year and have invited us around to see their systems.  For now, we’re going to invest in a series of massive containers for the basement and build our own cistern.  We’ll have to buy a giant tank for the bed of our truck and haul water from town but there’s a free spot to get it, it just takes half an hour of standing in -30 degree Celsius weather, filling the tank with a hose, then running another hose to the basement to get the water inside.  It does NOT sound fun at all, but it’s the least expensive option and it gives us time to think and research, and just see what unfolds because unless that well tech is Jesus, he doesn’t know for sure what’s going to happen. 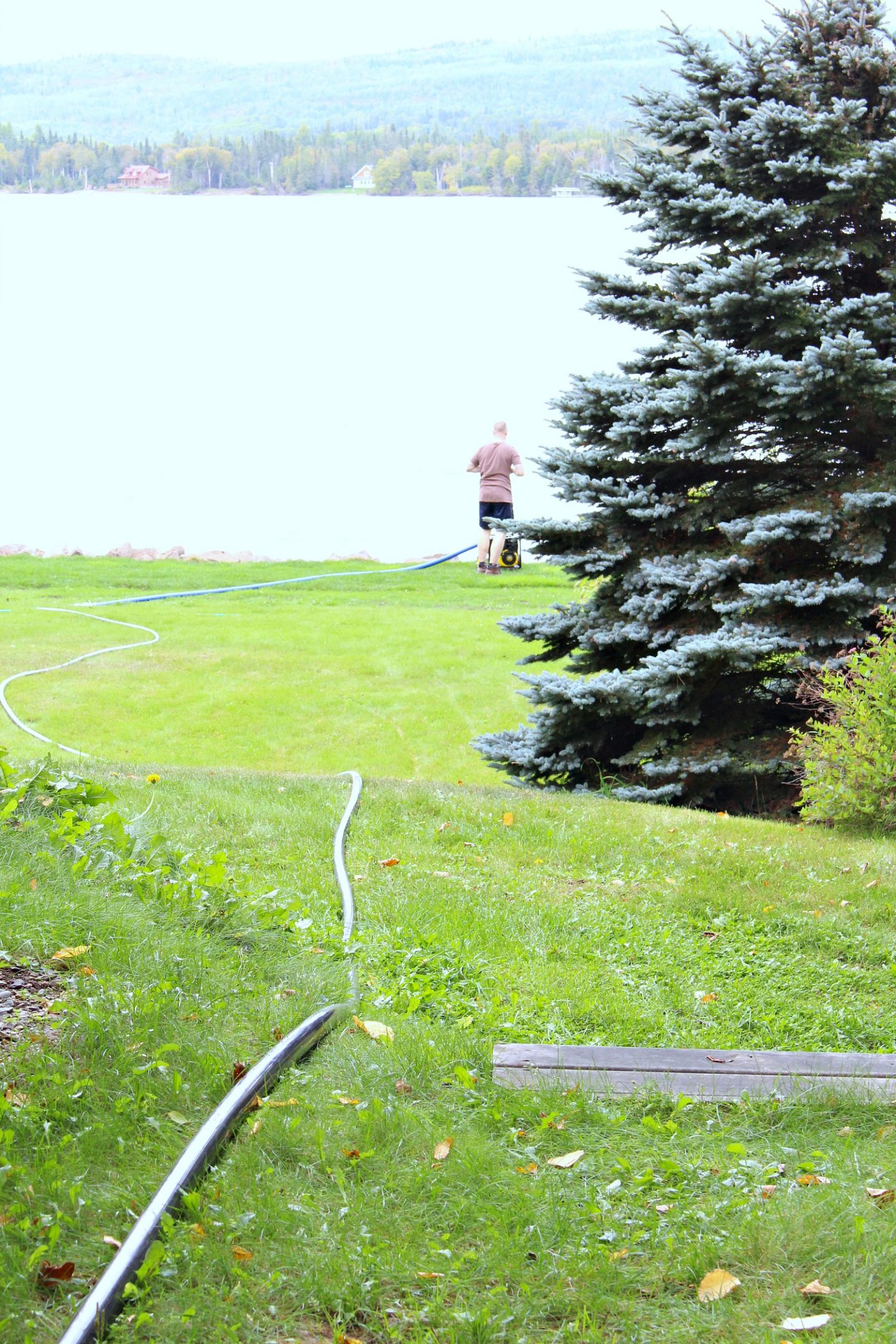 Until the snow fell, we were successfully pumping from the lake.  We bought a Champion 2-Inch Gas-Powered Water Transfer Pump, plus a 100 feet of hose, which I dragged down to the lake and I wish I’d taken video because as it unfurled I caught air going with it.  Hubby rigged up a little float for the end of the pump line with a little boat fender to keep it above the silt and keep the water as clean as possible to prevent the lines from getting clogged.  Our training as volunteer firefighters is coming in handy because that’s where we learned this trick! 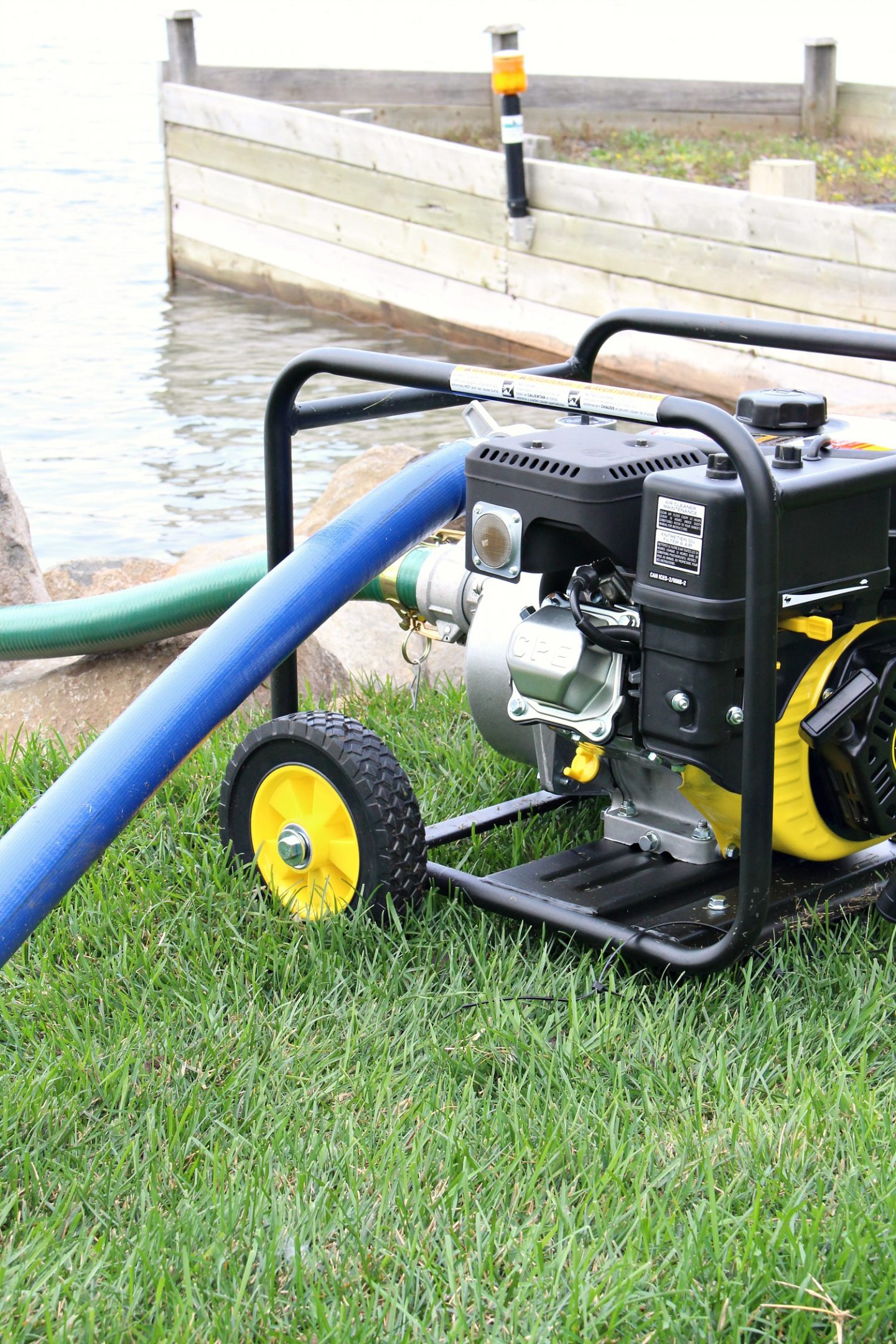 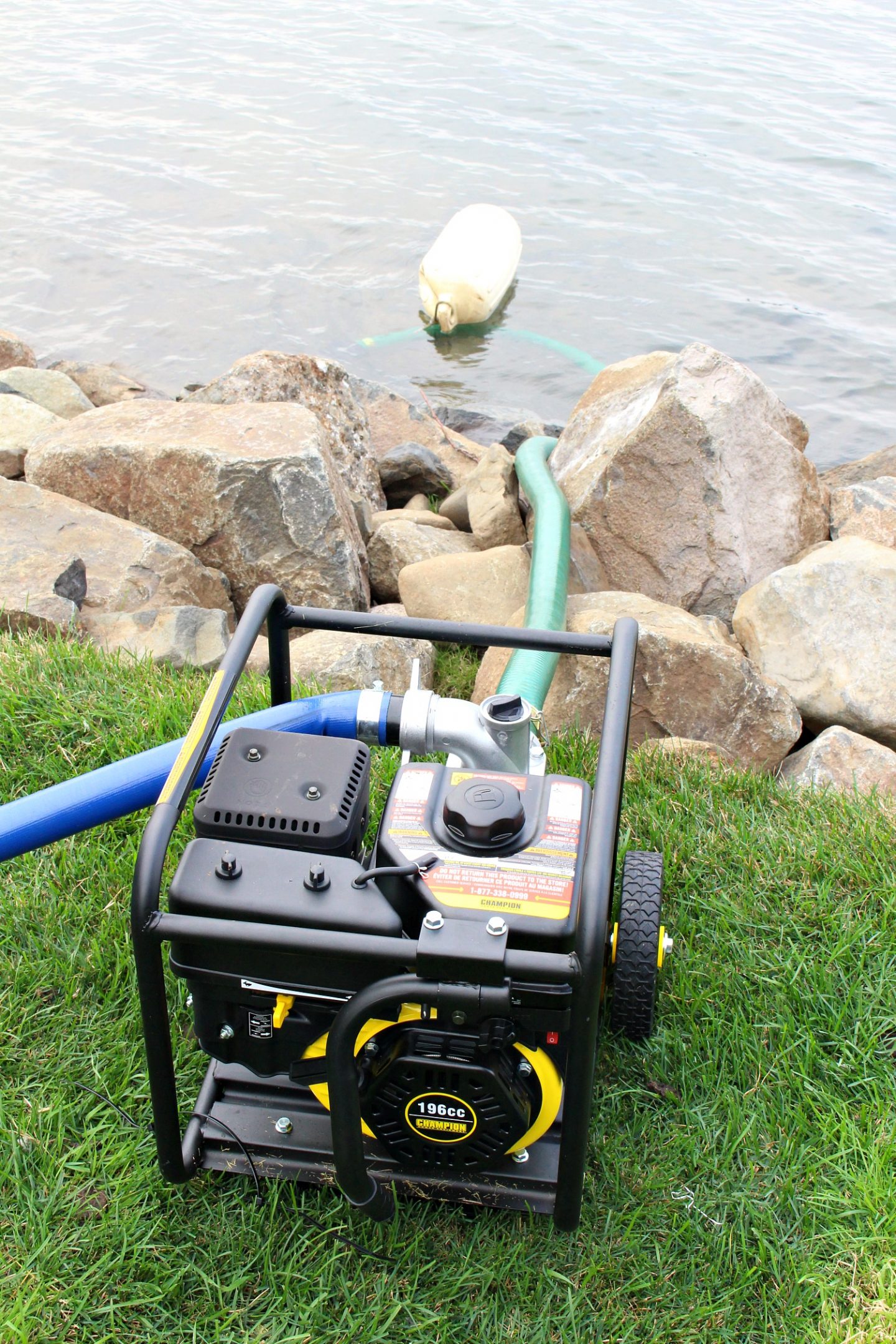 We pumped the water up our yard to the well, dumping it onto the ground (not directly into the well) so the ground could soak up and pre-filter the water before it ended up in the house.  This step – as opposed to pouring right into our well – ensured cleaner water and was less taxing to our water filtration system, which might have filled up with silt and muck otherwise. 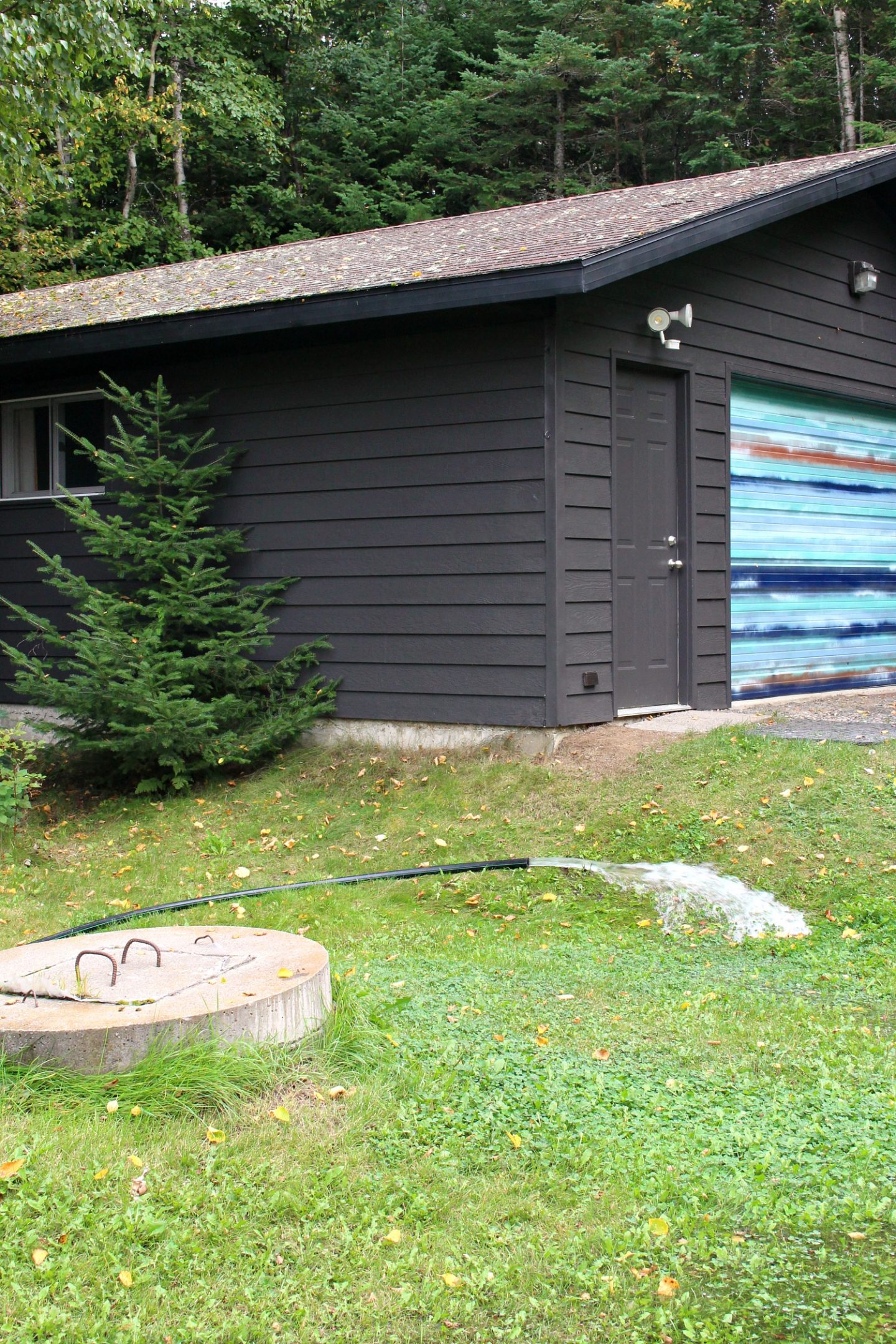 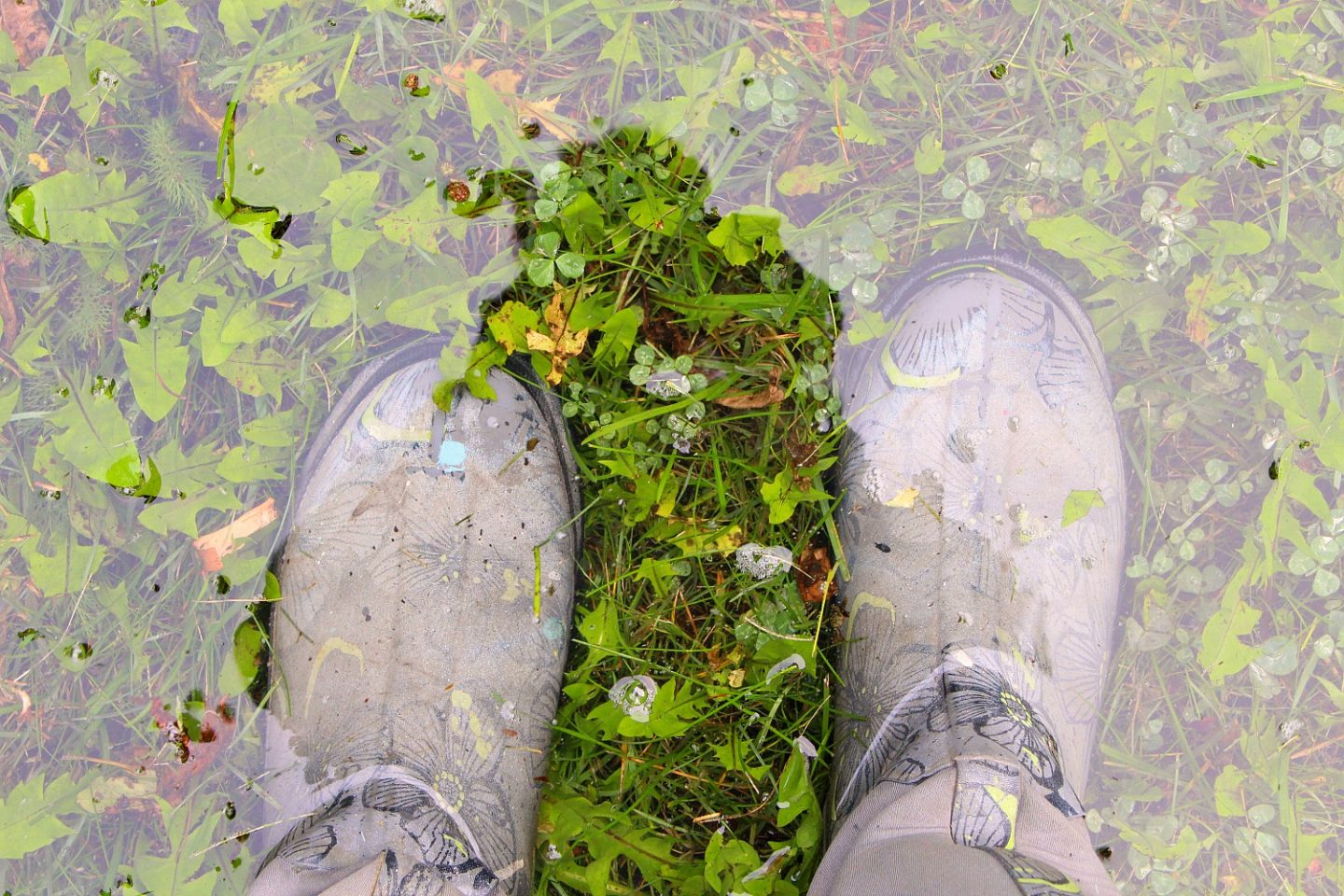 We were impressed with how well the pump worked!  And so thrilled that we didn’t flood the basement, haha.  We pumped about 100 gallons a minute, which added up to be almost 9,000 in an hour and a half or so.  I wish we lived somewhere warm enough to do this all of the time because we could manage this!  I have no idea how I’ll handle hauling my own water when it’s the middle of winter, but I guess that’s good motivation to get my DZ license so I can do it with the Fire Department pumper truck, haha.  I guess I really can’t complain because I’ve volunteered to haul water as a fire fighter – it just sounds so much less fun to have to do it regularly for my personal use.  To be honest, I’m kind of hoping for a miracle instead.  We had lots of rainfall this fall and we already have a blanket of snow, so maybe the water table rose and maybe the snow will insulate what little we have so it doesn’t freeze?  I don’t know if I’m that lucky but we’ll see.  In any case, now you know why a massive basement de-cluttering happened and soon we’ll install our little DIY indoor cistern system – I’ll be sure to share the scoop on that.

This well information probably doesn’t help a lot of readers, but it is a lovely, real look at lake life – there’s a cost to that beautiful sunset!  We often only see the glossy side of people’s lives on social media, so I like to share the gritty bits every now and then.  And IF anyone else anyone else is having well problems, I’ll keep you posted on the progress and the system we settle on – for sure you’ll get to see me bundled up in my parka trying to run hose from my truck to the basement with sixteen pairs of mittens on.  That’s a glamorous Insta-story right there.