I’ve gotten a lot of questions about this, so I’m going to explain why we changed our patio doors after my turquoise patio door makeover – and why I now think that garden doors are better than sliding patio doors.  You’re also getting a little peek at the (mostly completed) new house exterior!  If you follow me on Instagram you’ve probably already seen a ton of progress photos and video in my stories, as well as a juicy before/after slideshow.  I’ll be sharing the full scoop on our house exterior renovation in the new year, but I wanted to sneak in before the year ends with this one post about the doors leading to the deck. 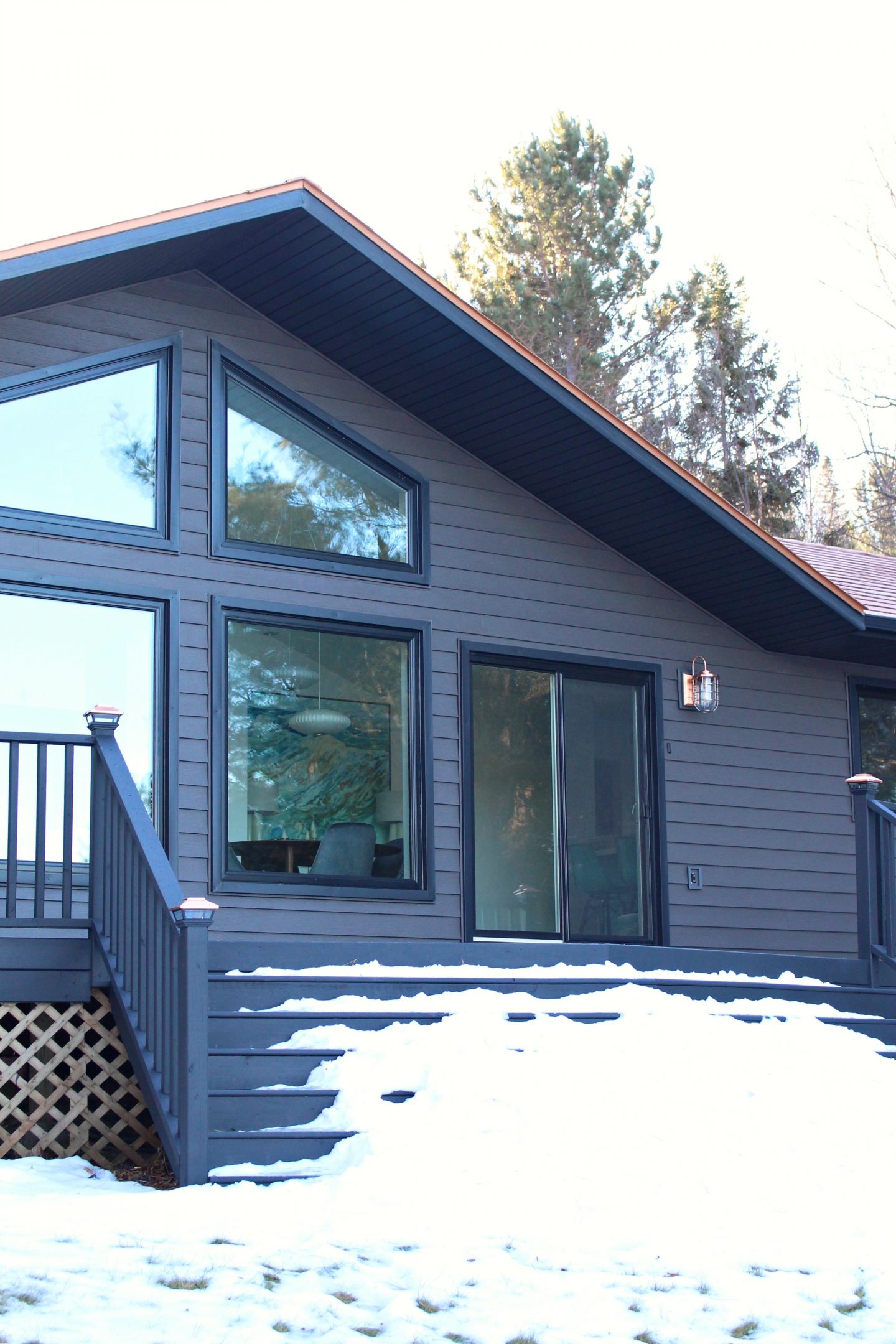 This whole exterior renovation kind of snowballed into a much bigger project than we planned for – and a much bigger project than the company we hired could manage, to be honest.  I think that the owner was ill-equipped to handle a renovation this size and I wish I had recognized that because I was definitely in over my head too and could have benefited from someone more experienced to walk me through it.  Prior to this we owned a condo townhouse, where we weren’t even allowed to replace (or paint!) the front door, so renovating an entire house exterior was a scary BIG new project for us.

When we talked about replacing the windows, I wanted to replace the garden doors too but it just seemed like too much $$$ to replace everything at once.  There was lots of talk of capping windows and doors and when we finally settled on new black windows, no one thought to tell me that none of this “capping” would cap the white part of our garden doors.  So picture the black windows, black soffit, black trim, black deck and then a thin strip of white on our old garden doors! 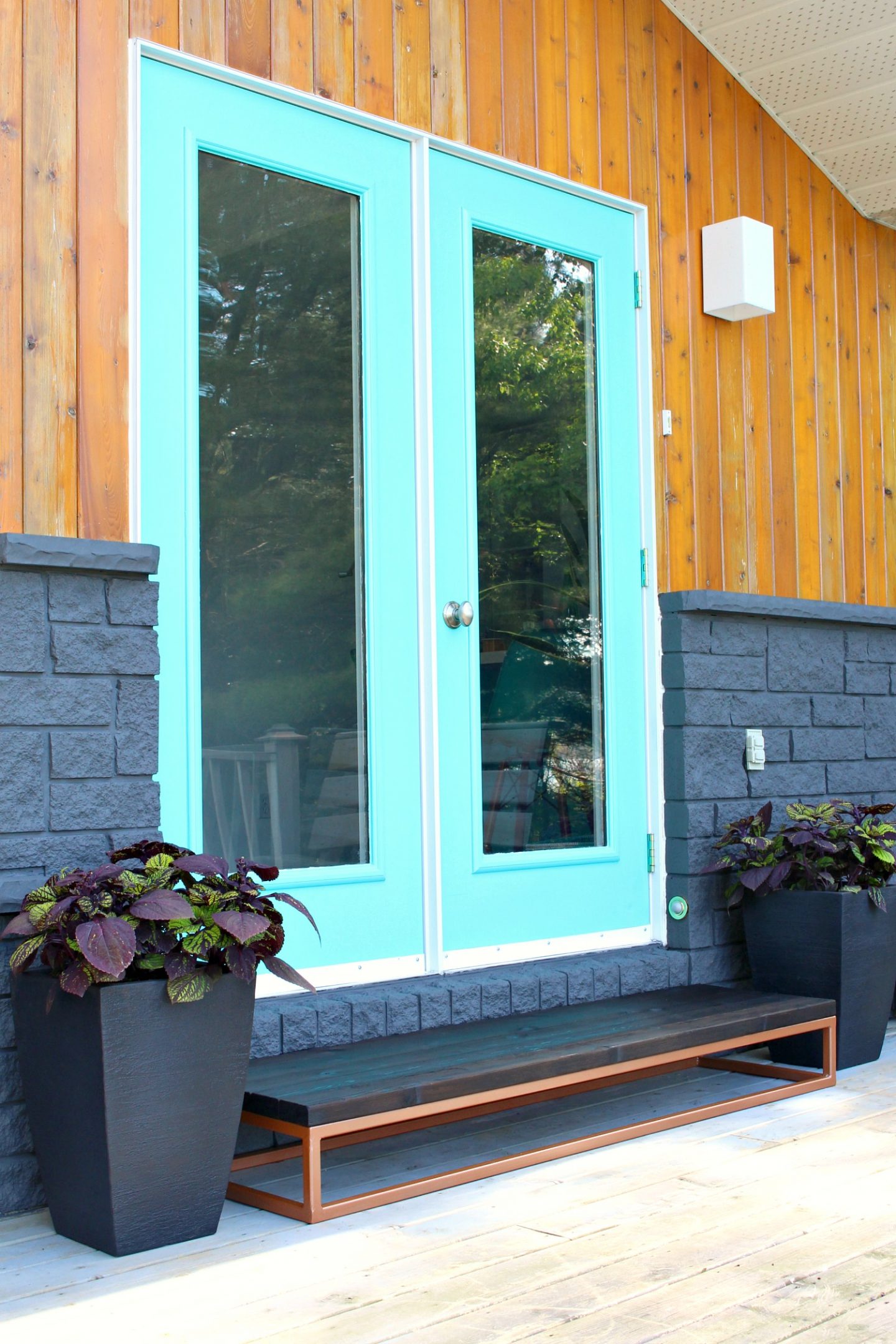 I asked for clarification about this and the answer I got was, “uh, yeah, I guess you should order a new door”.  Sigh.  With only weeks to go before the renovation was supposed to start, I frantically tried to order a door but every place we called was back-ordered like crazy.  Because we live so close to the border, I started calling home improvement stores in the US and finally got a lead: the Marvin Integrity line is guaranteed in 10 business days.  The downside was the glass would be double pane, while our new windows were going to be triple pane, but we were assured it was a very high quality door.  I had never purchased from Marvin but from what I read online, I thought it was a high quality brand.  Our sliding doors certainly weren’t cheap!  Hubby always thought that garden doors are better than sliding patio doors, but I had my heart set on sliding glass doors.  The old garden doors had a really thick frame, which blocked light and the view, and I didn’t like how they swung open.  They were actually one of the first makeovers I tackled in the lakehouse (you can see here what they looked like before if you keep scrolling): 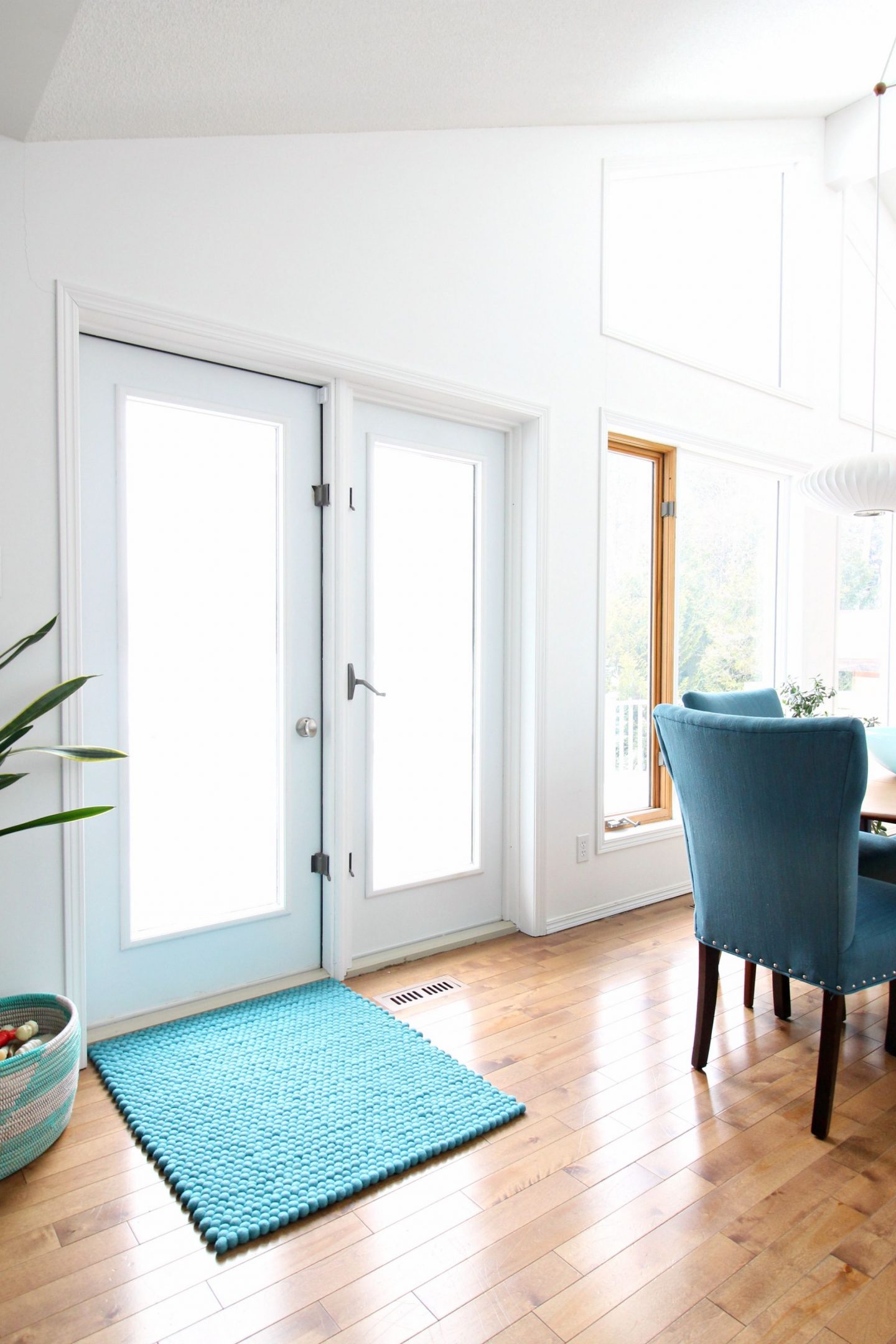 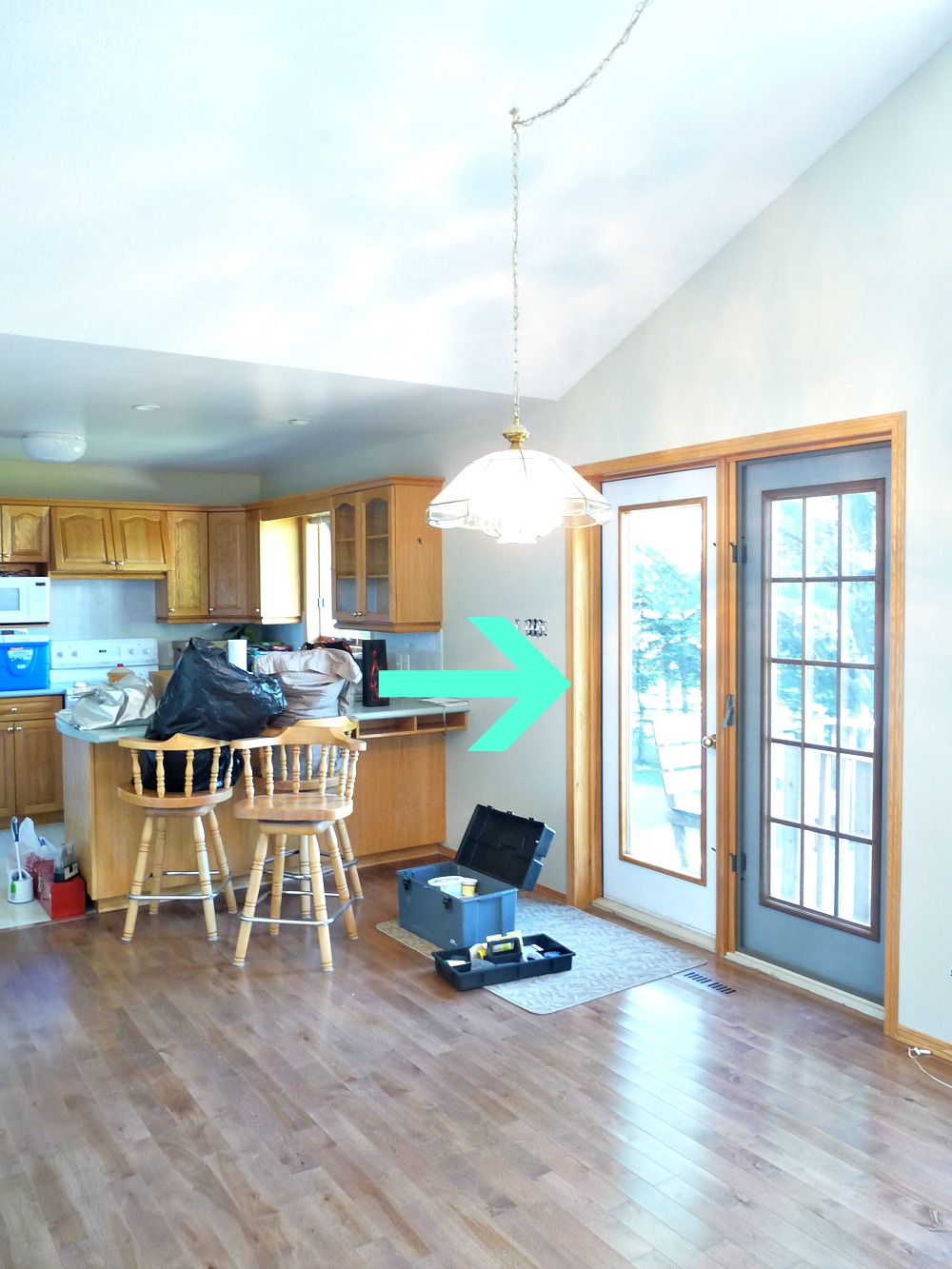 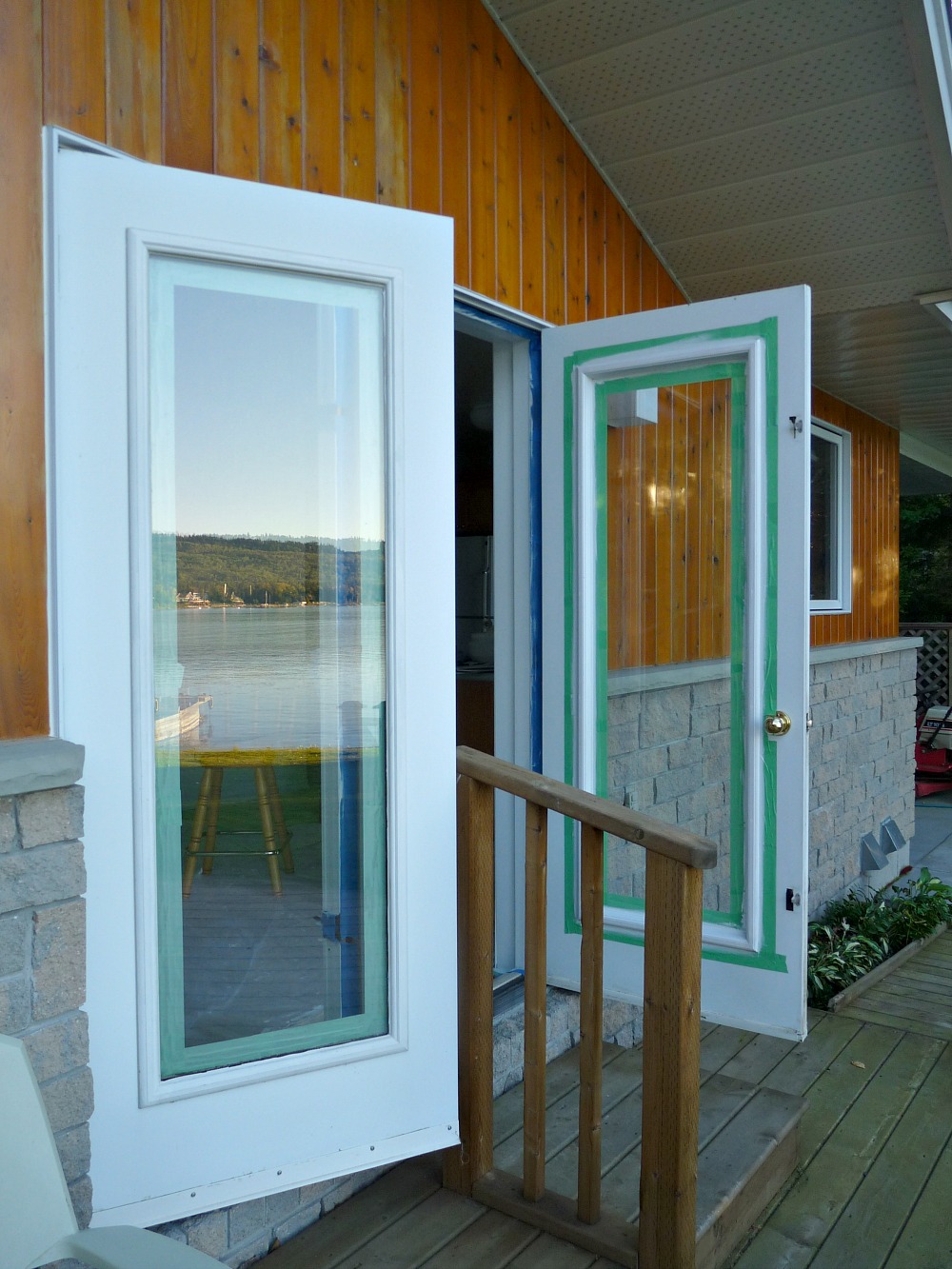 We decided to go ahead and order the Marvin Integrity sliding patio doors to meet the deadline.  We had to borrow a trailer from my father-in-law and drive to the States to pick it up ourselves – which was nerve wracking.  It’s heavy!  And very breakable.  I’m getting freakishly strong, because my favorite part of fire department training is cutting open cars and the jaws of life weigh over 50 pounds, so we managed. 🙂  Installation wasn’t fun (luckily the siding guys did it for us), and that’s when we realized that the way the original windows and doors were installed, the manufactured stone couldn’t stay.  I had originally wanted to remove that but was told it was too difficult, so my Mom and I spent weeks painting it.  But that’s a rant for a different day!

Oh yeah, did I mention the new door somehow ended up shorter?  We are CERTAIN we measured correctly but, ta da, shorter.  Luckily we always have a ton of building supplies lying around so we could supply some 2x4s to frame out the new door.  For weeks that bugged me so much, but I actually forgot about it until I was editing these photos so I guess I’ve gotten over it! 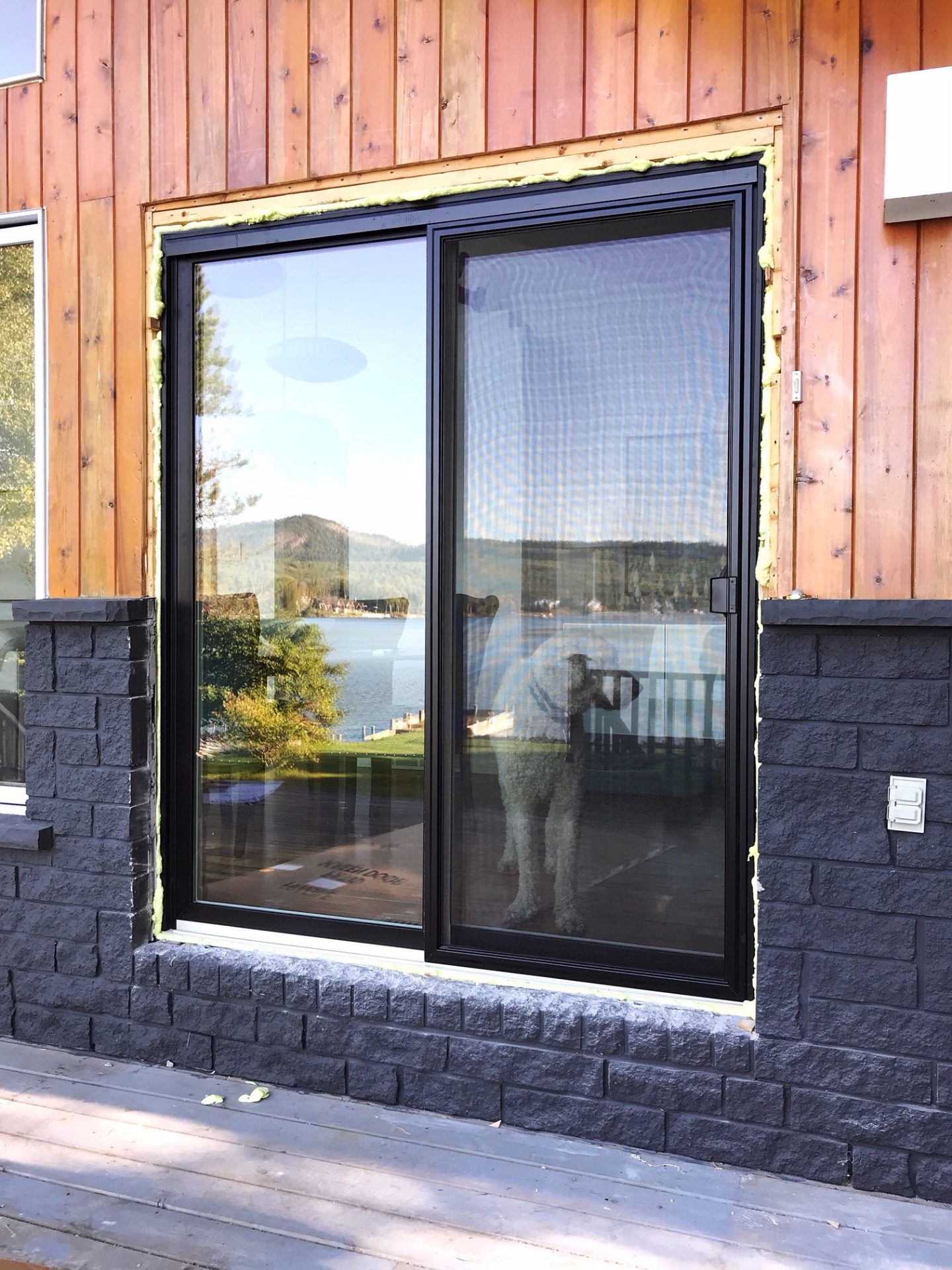 Once the new door was installed, I realized it leaked air (and water) like CRAZY! 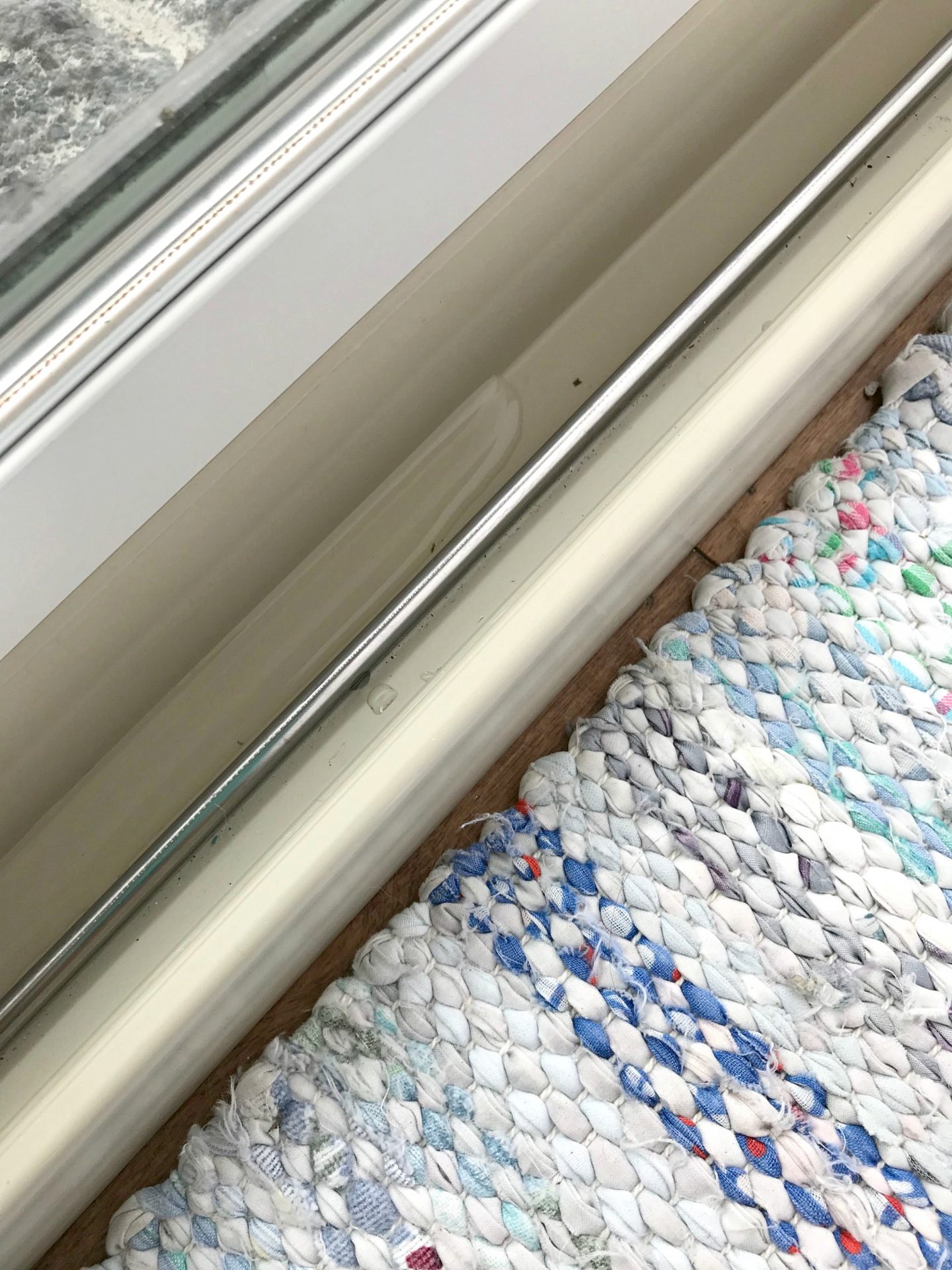 Neither Marvin, nor the small town hardware store we ordered the door from, were very helpful because I was in Canada and I had purchased it in the States (again: my mistake!).  Had I been located in the US, apparently they would have sent out a technician and immediately fixed the problem (apparently).  For my case, the hardware store just never returned my calls/emails but Marvin initially tried to blame installation, no matter how many times I explained that the major problem was on the fixed pane of glass itself – I even sent photos of the weird gap on the fixed panel of the patio doors: 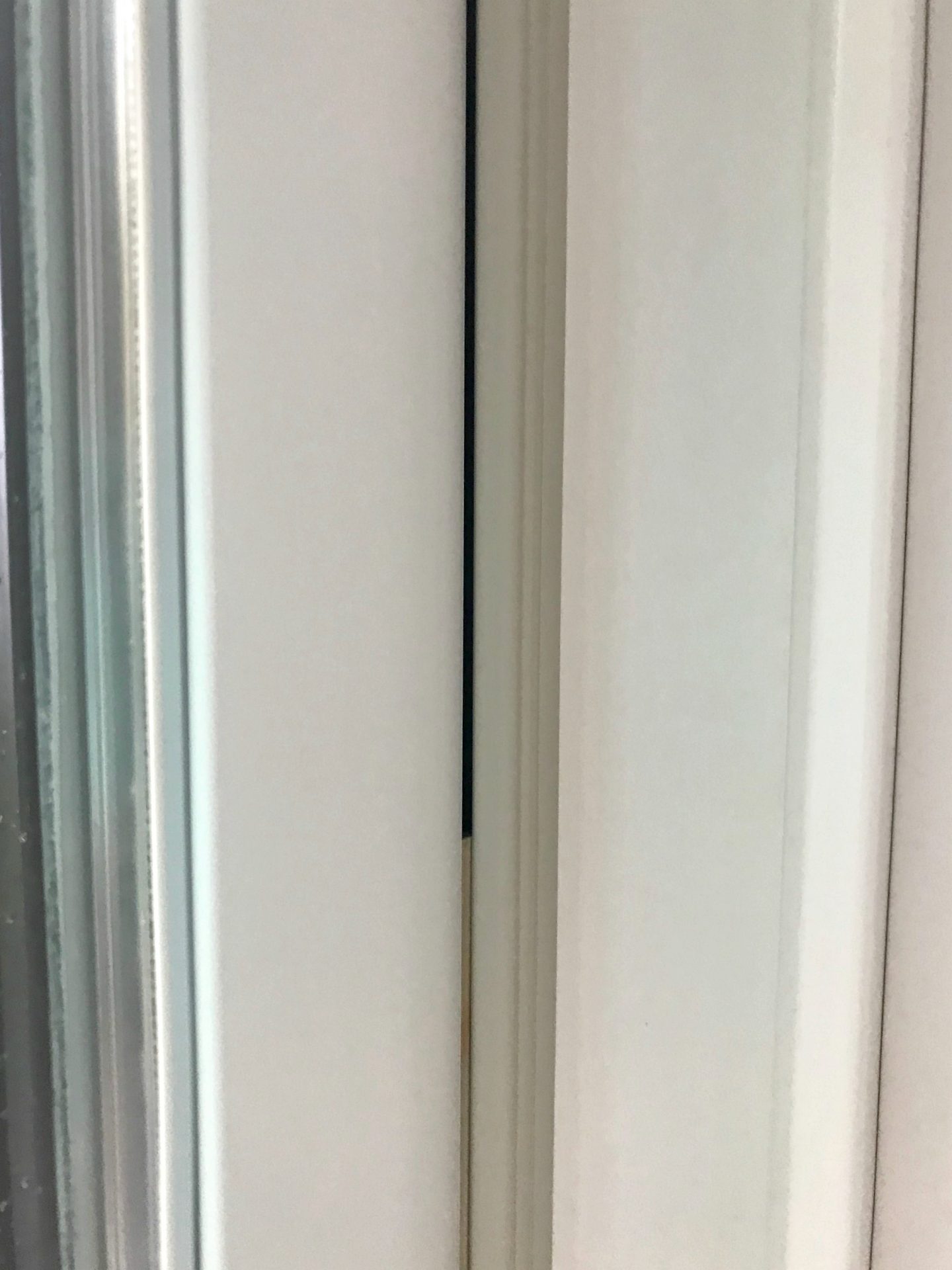 They were very friendly and made big promises, but weeks passed and they were very slow to offer any help.  It was only after I casually mentioned that a I run a DIY blog did I get impressively long and detailed troubleshooting emails.  In the end, after looking at the schematic drawings we were emailed, we figured out ourselves that the fixed door had not been fabricated properly.  We had to kind of take it apart and put it together tighter so the seal could engage.  It had nothing to do with the installation, it was just made poorly and incorrectly.  The siding guys awesomely spent time to help Hubby and I with this, and I’m so appreciative because although the owner was a real goober, his employees knew what they were doing and were incredibly helpful.  This Marvin sliding patio door no longer blows air in, but it’s still a crappy door.  It is very rickety and creaks loudly in the wind like you’d expect an old, cheap sliding door to, plus it is currently frozen shut because the water doesn’t weep properly (and leaks in to the house, but luckily the dogs like lapping it up), and it’s got this weird beige track that looks awful.  I ordered black exterior/white interior – why they thought slapping some beige on would look good is beyond me.

Seeing that the exterior renovation ended up being 3+ months overdue, I now realize I could have ordered ANY door I wanted in the world and gotten a much better quality door, probably for a lot less money.  That makes me angry but let’s look at photos and appreciate that at least it’s all black!  Except for that frigging beige part… 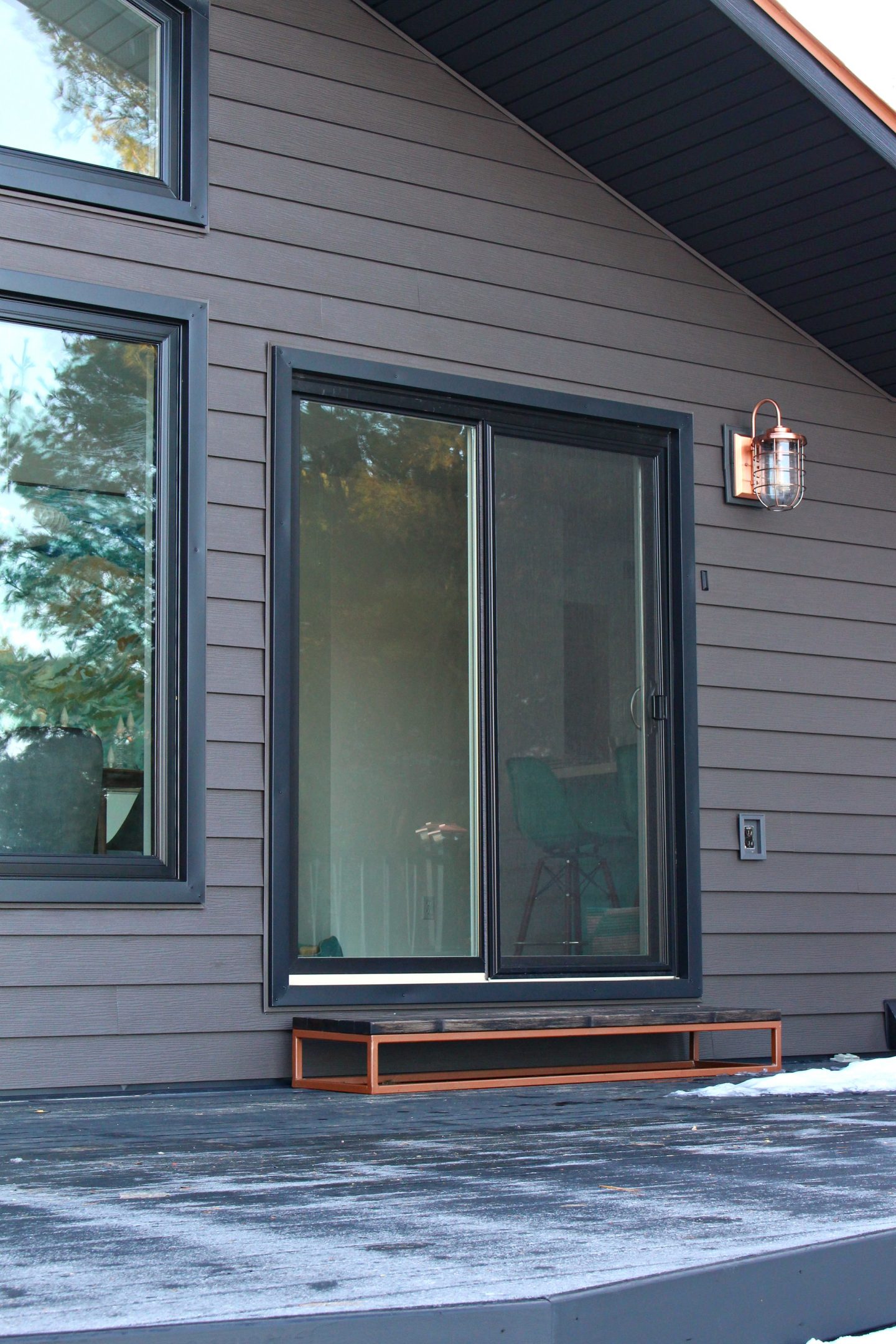 Hubby was right: at least for our geographical location, garden doors are better than sliding patio doors!  Now that I’ve experienced both the sliding patio doors and garden doors, I can confidently say that the old garden doors, even though they were 20 years old, sealed much more tightly.  So I definitely agree now that garden doors are better than sliding patio doors – although my only frame of reference are these lousy sliding doors (and the old ones in the townhouse).  The garden doors also always opened, whereas this sliding door freezes shut the second any water or snow gets in the track.  One downside to the garden doors though, was that sometimes the window whipped it out of my hand and it slammed open, which resulted in some dents where it had hit the door stop with a lot of force.  The sliding door, obviously, doesn’t do that, which I really like – it was one of the reasons I wanted to switch to a sliding door.  Hilariously, the dogs aren’t used to it and still run into the screen door (do they not see it?) every. single. time.

I think I would choose a garden door in the future and luckily this door can be replaced down the road, we just don’t have the money right now.  Or for the foreseeable future.  This might be a retirement project.  Until then, I will enjoy how this sliding door is all glass so it lets in way more light (yay!), showcases the view better (yes!!) and looks better than the old door (except for the beige track).  When it was first installed, I loved it so much more than our old garden doors – but everything is better in the summer.  When the wind is whipping off the lake and we’ve been plunged into frigid temperatures, I hate this leaky, creaky thing.  Now that our windows, which are manufactured in Toronto, are installed, it’s very apparent how cheaply made this Marvin door is by comparison. 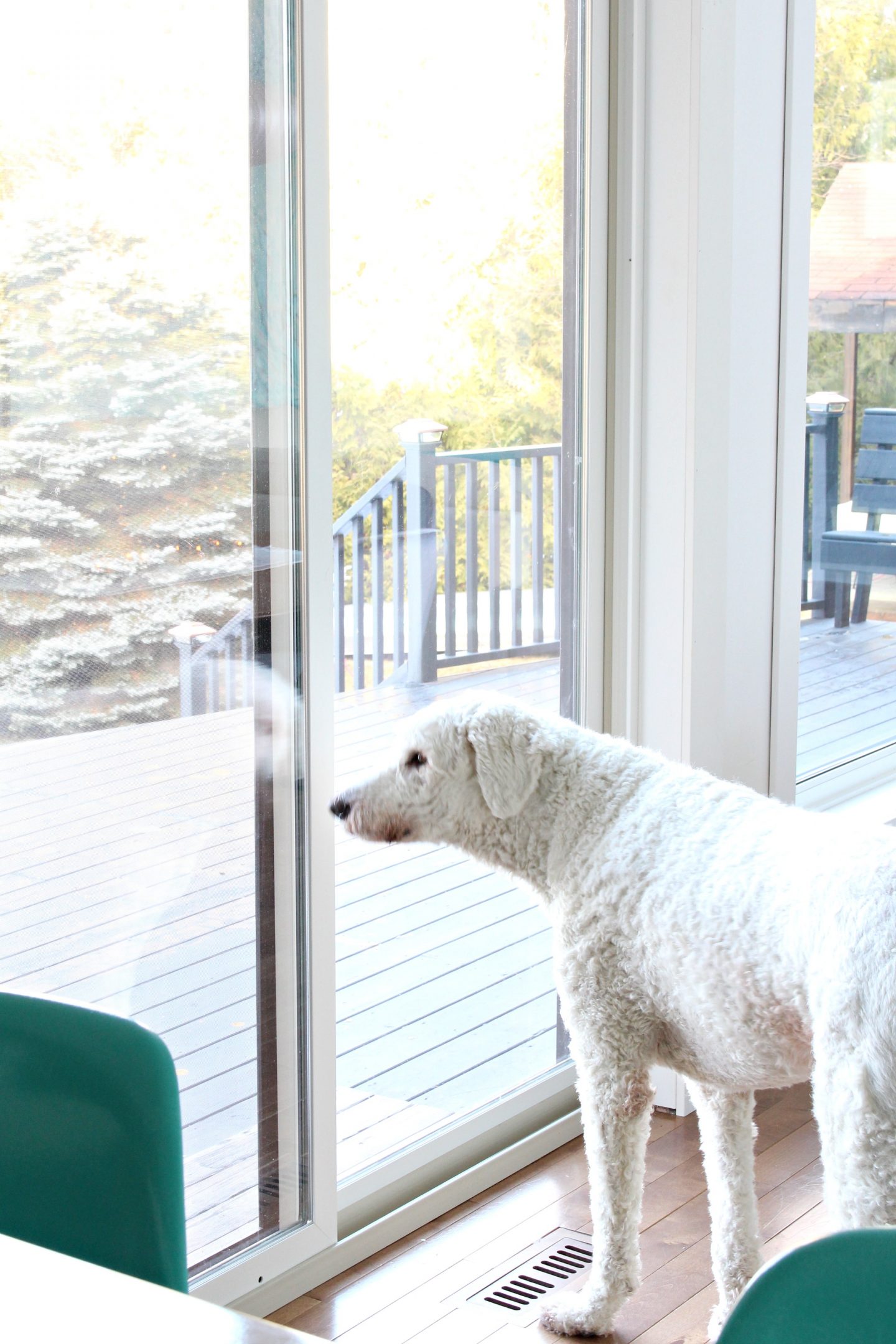 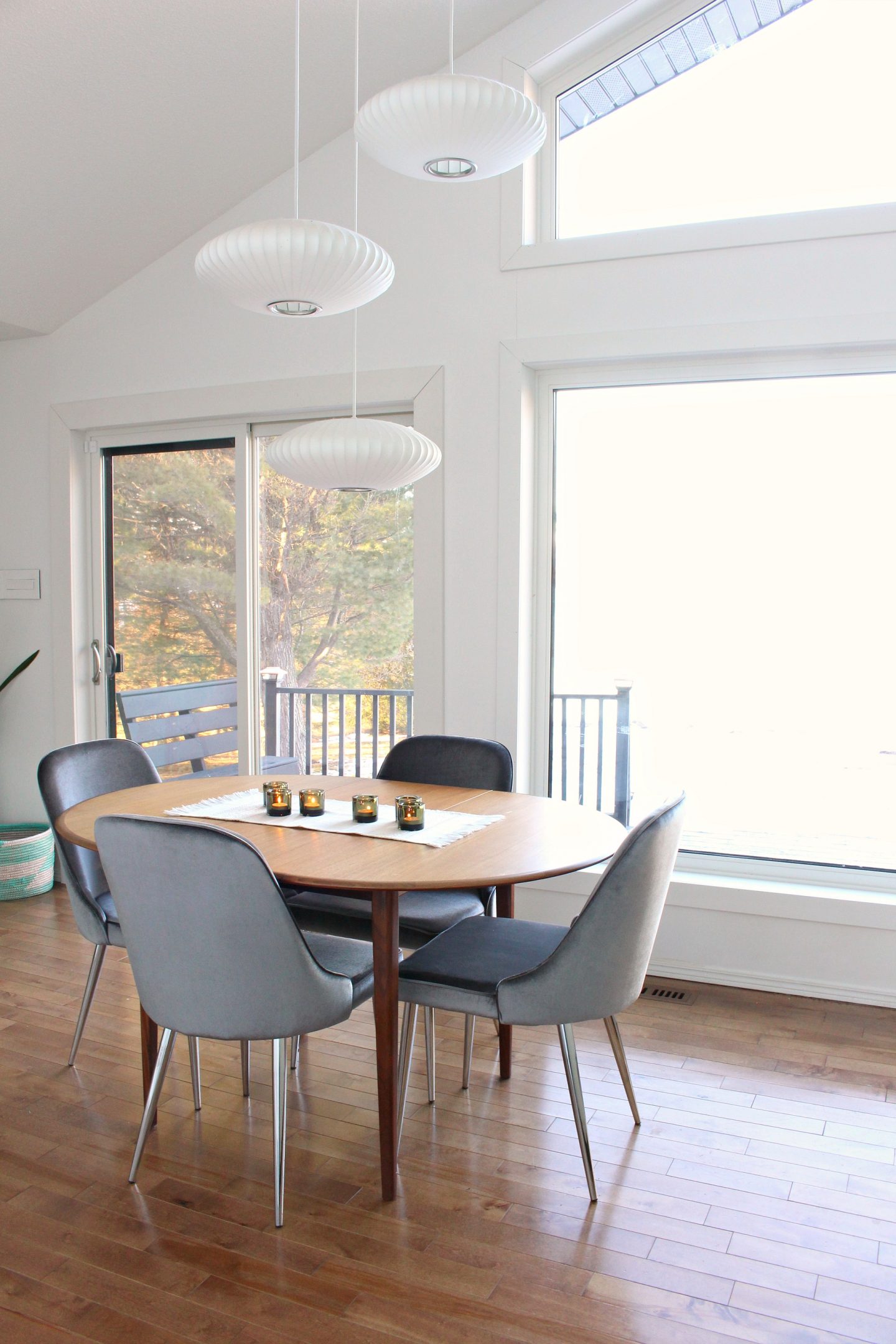 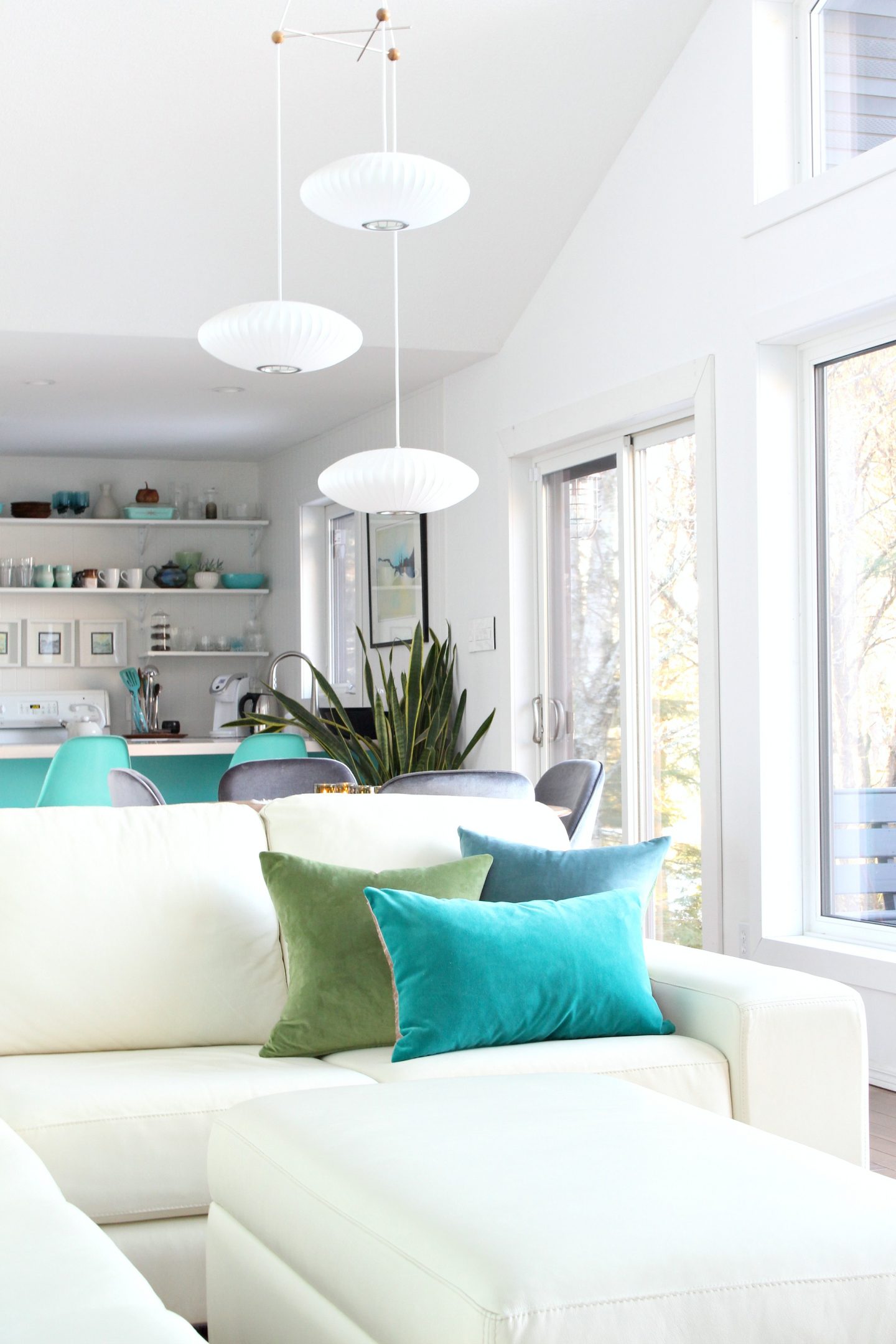 So that’s the story of our patio doors: why we replaced them after I took the time to give them a makeover, and why I now think garden doors are better than sliding patio doors!  (And why I’d never buy from Marvin again – yeesh).  There have definitely been some ups and downs with this exterior renovation – I have so much more juicy drama to share.  But I’ve learned a lot of lessons here and luckily this particular problem can be fixed at some point in the future and we can just get a much better quality door.  It’s actually not all bad news because had we kept the old door and decided to replace it later, the way it was installed would have meant we would have had to remove some of the siding.  At least now, because this door installed differently, it’s much easier to replace.  So there’s some good news in there.  There’s always good news in there somewhere. 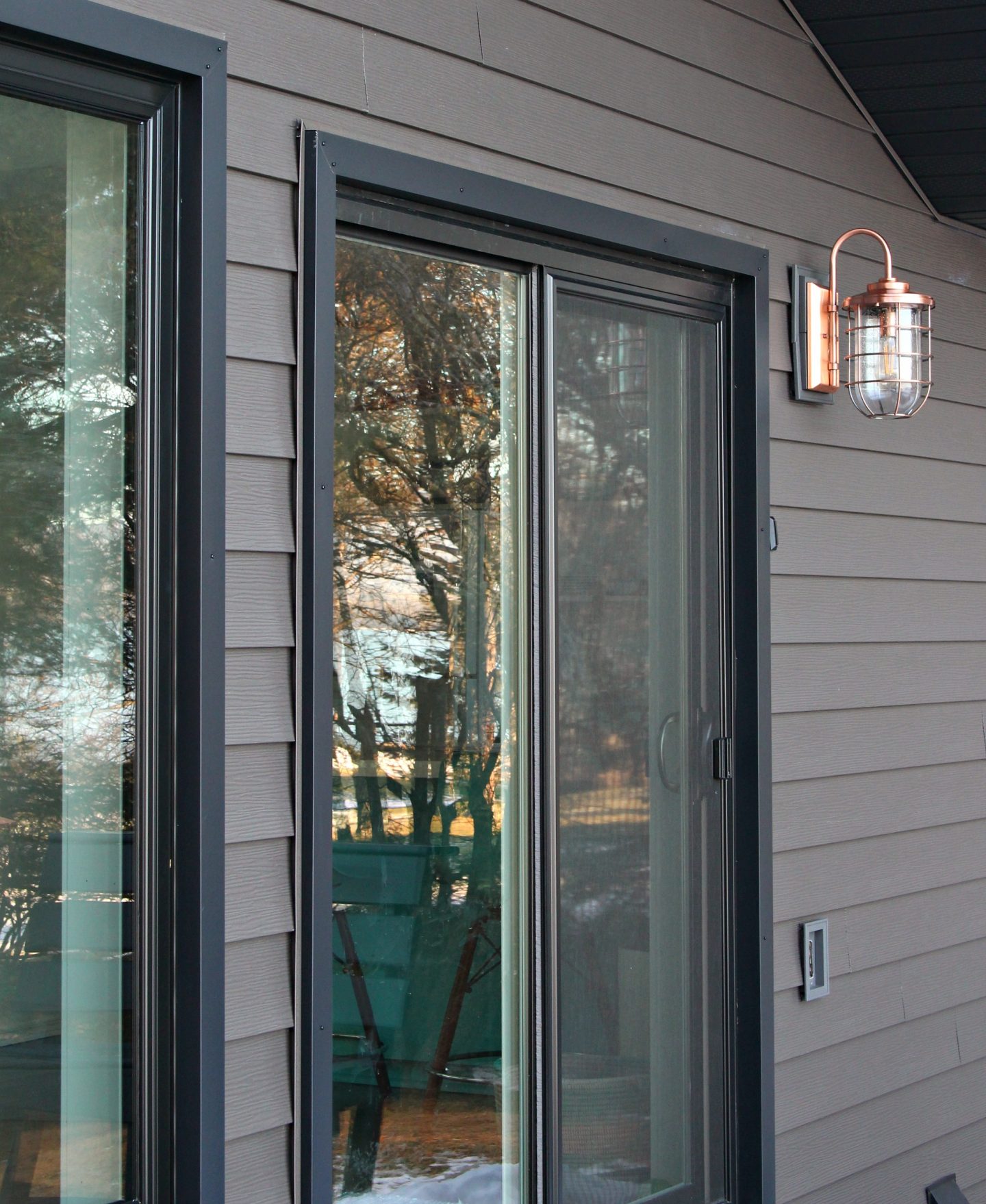 P.S. Check out the old patio door makeover here, the tutorial for my wood burned step here, and the OG fake french door makeunder here.  As you can see, after polling everyone with choices on Instagram stories, I chose the copper Westinghouse Ferry Lights (details soon).  If you’re shopping for outdoor lights, you can find them on Amazon.  I am in love with them!  They match the copper roof so perfectly and I am smitten with the subtle nautical vibes. 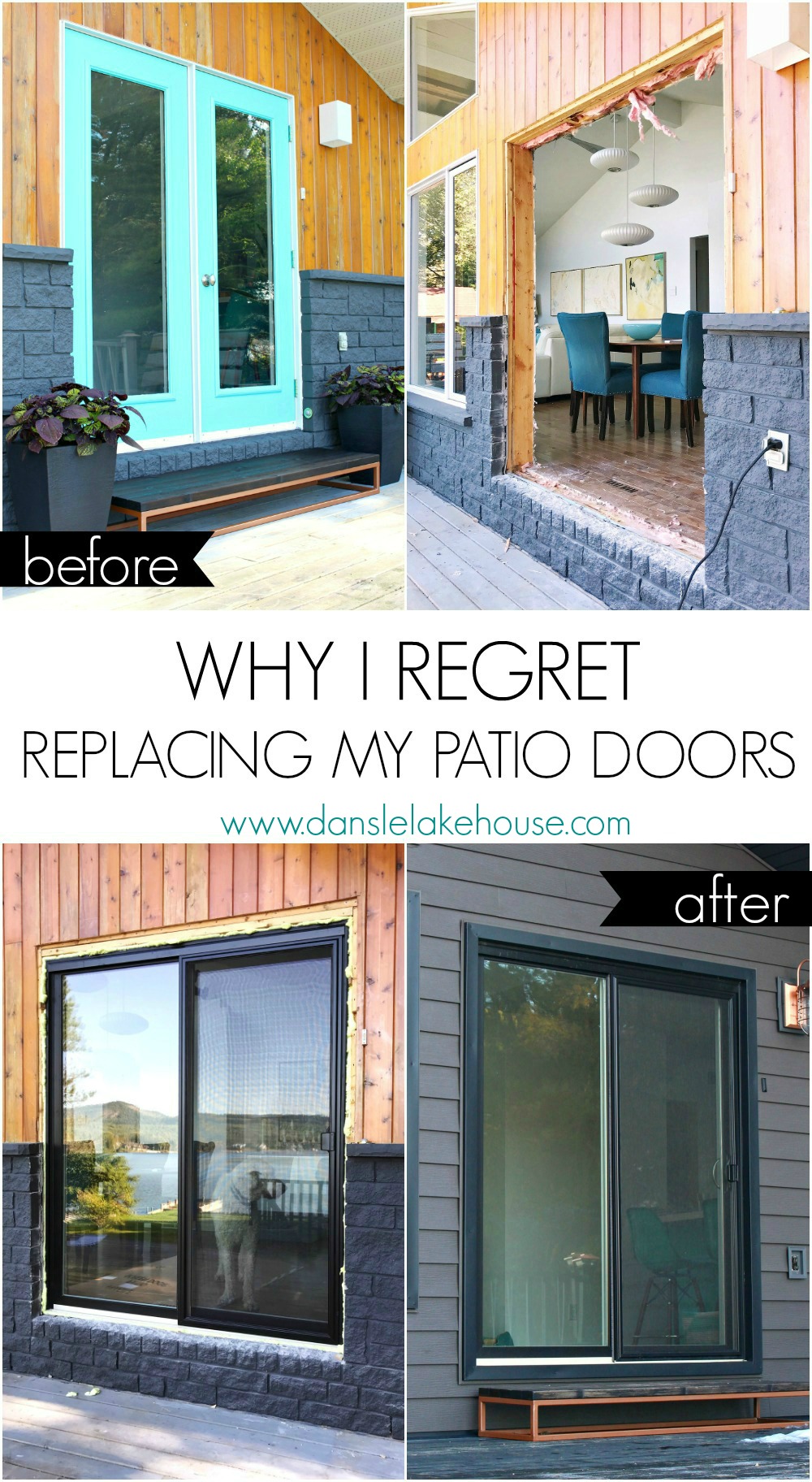