My whole editorial calendar is totally out of sync with the massive heaps of snow around me, but I decided to just ignore the seasons and share my black deck with copper solar deck caps.  For lots of my readers, spring is coming soon anyway!  Before you know it, you’ll be deck staining and BBQing.  I’ll still be shoveling, I’m sure, because we can’t even be certain that the snow is gone-gone in May.  Why do I live here?  Oh right, this cutie: 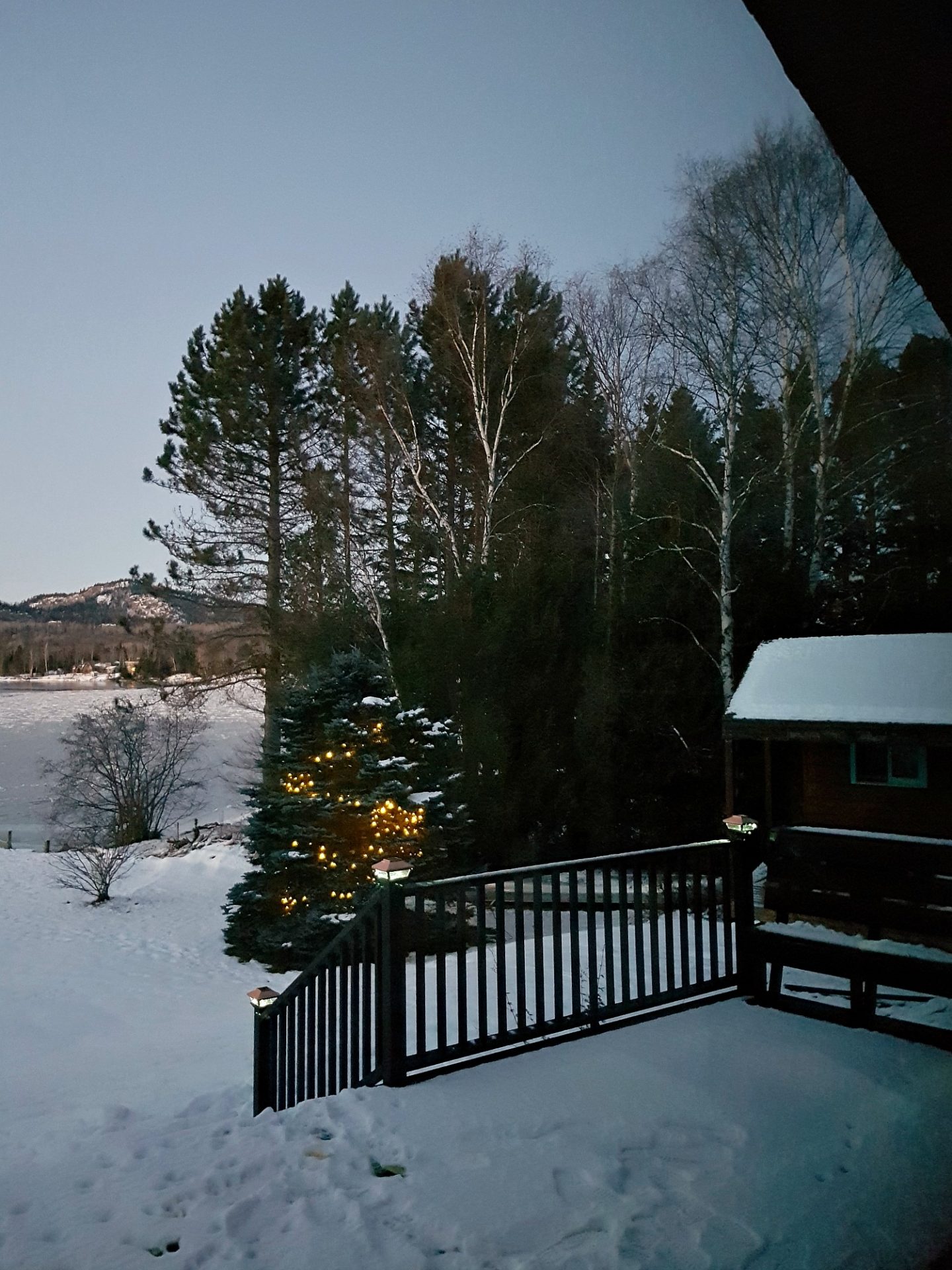 Applying the black deck stain was definitely a lesson in patience.  I wanted to wait until all of the exterior work was done so the scaffolding and tools wouldn’t scuff it.  But as I flipped calendar pages and it got colder and colder, I realized that I was running out of time.  Eventually it was too cold to use a traditional stain, but I really didn’t want to stare out at our ratty deck all winter.  I stained it grey back in 2014, but our deck wasn’t built properly so it’s difficult to maintain it.  There aren’t ANY spaces between the boards, so the water doesn’t drain.  The water just pools on the deck surface, wreaking havoc on the stain, the wood, and causing mildew and mold to grow.  We will at some point have to re-do the deck (or maybe even just cut some gaps between the boards).  In any case, this won’t be the last you see of our deck problems.  You can see how it had gotten gross again in these photos: 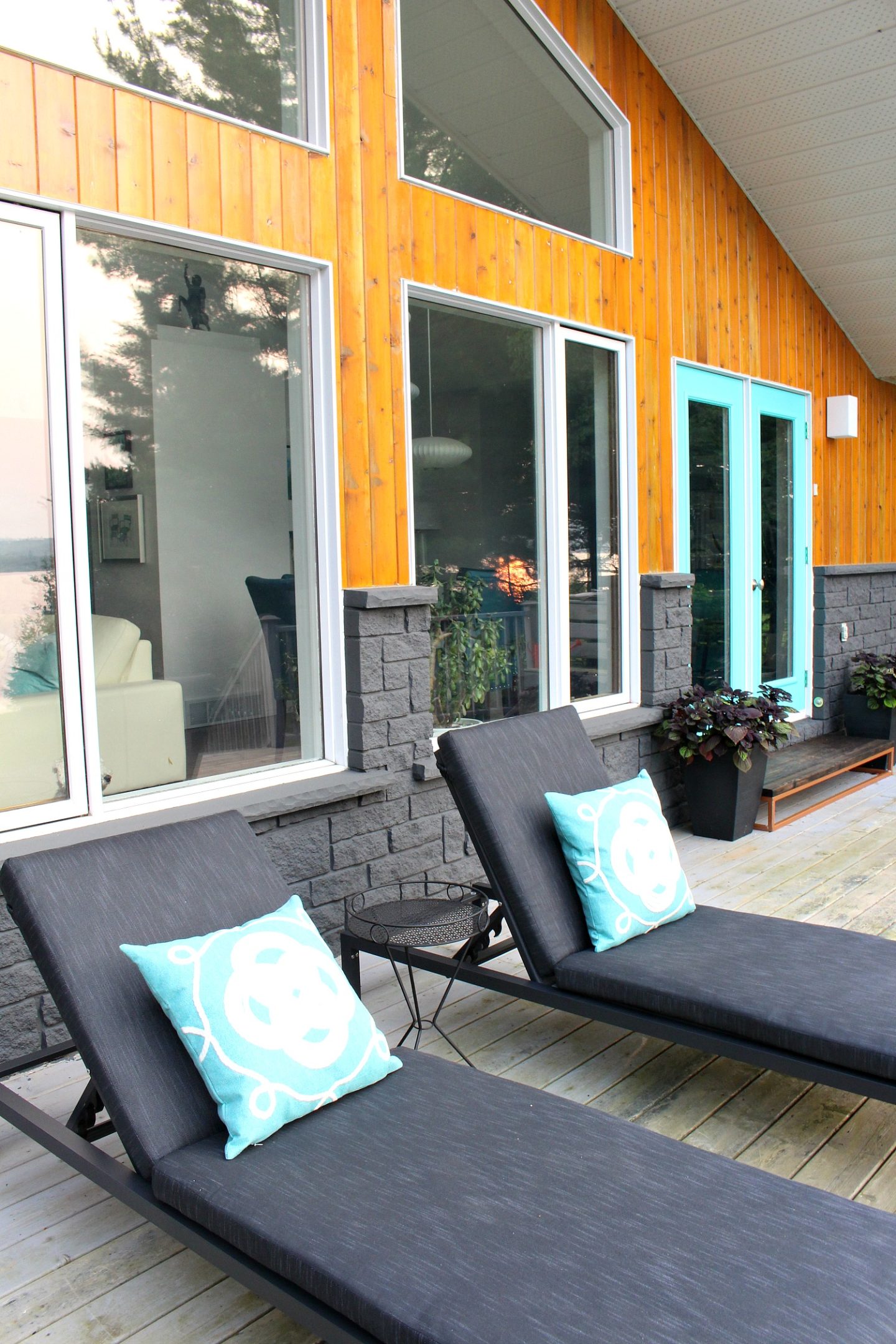 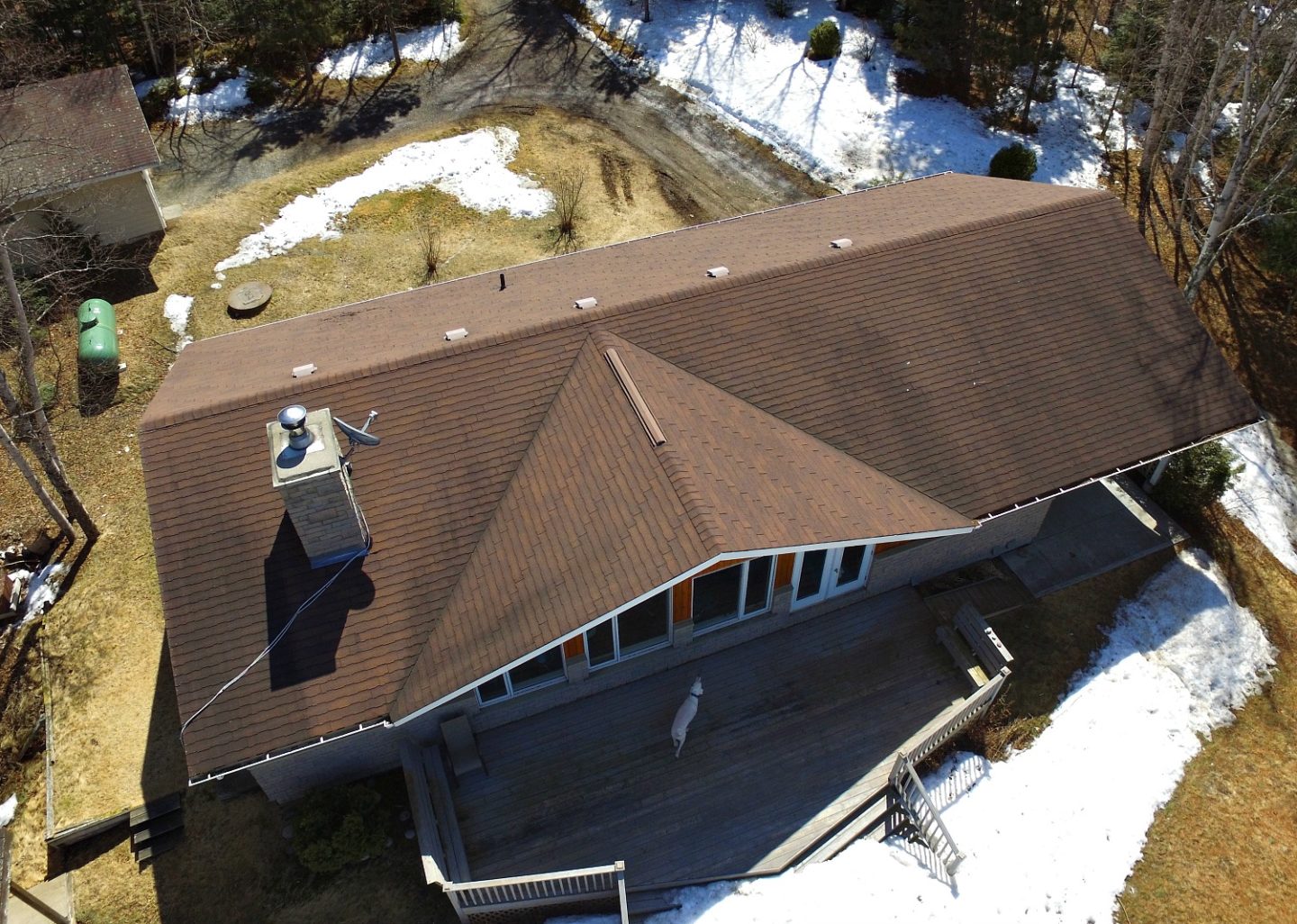 For now, I just wanted to cover and conceal and this time I opted for a matte black deck stain.  But of course we had a super rainy fall.  I can’t complain – it was good for the new lawn and the well problems.  It just made finding a day to stain difficult and I was caught off guard by a surprise rain shower which ruined Day One of my work! 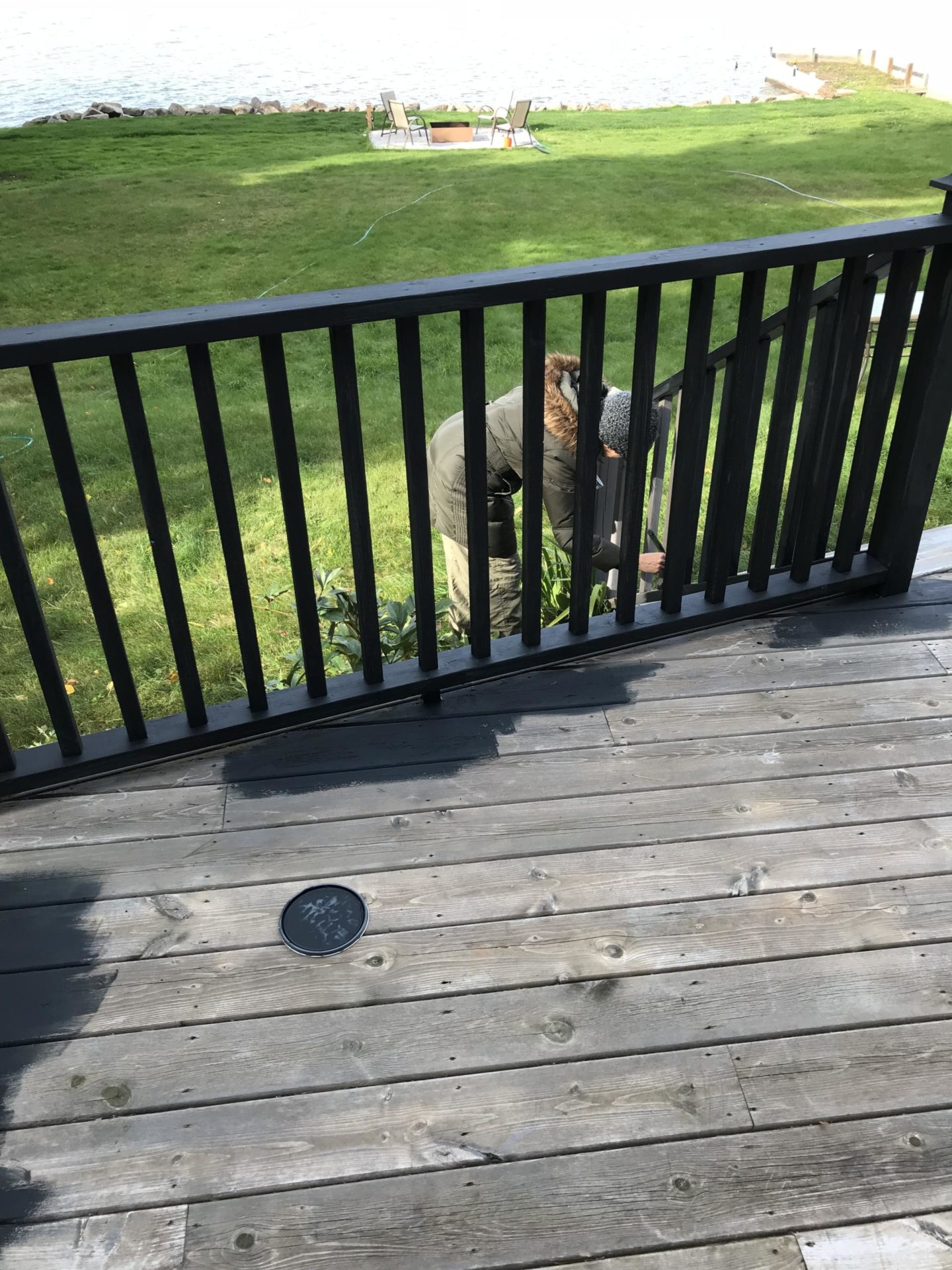 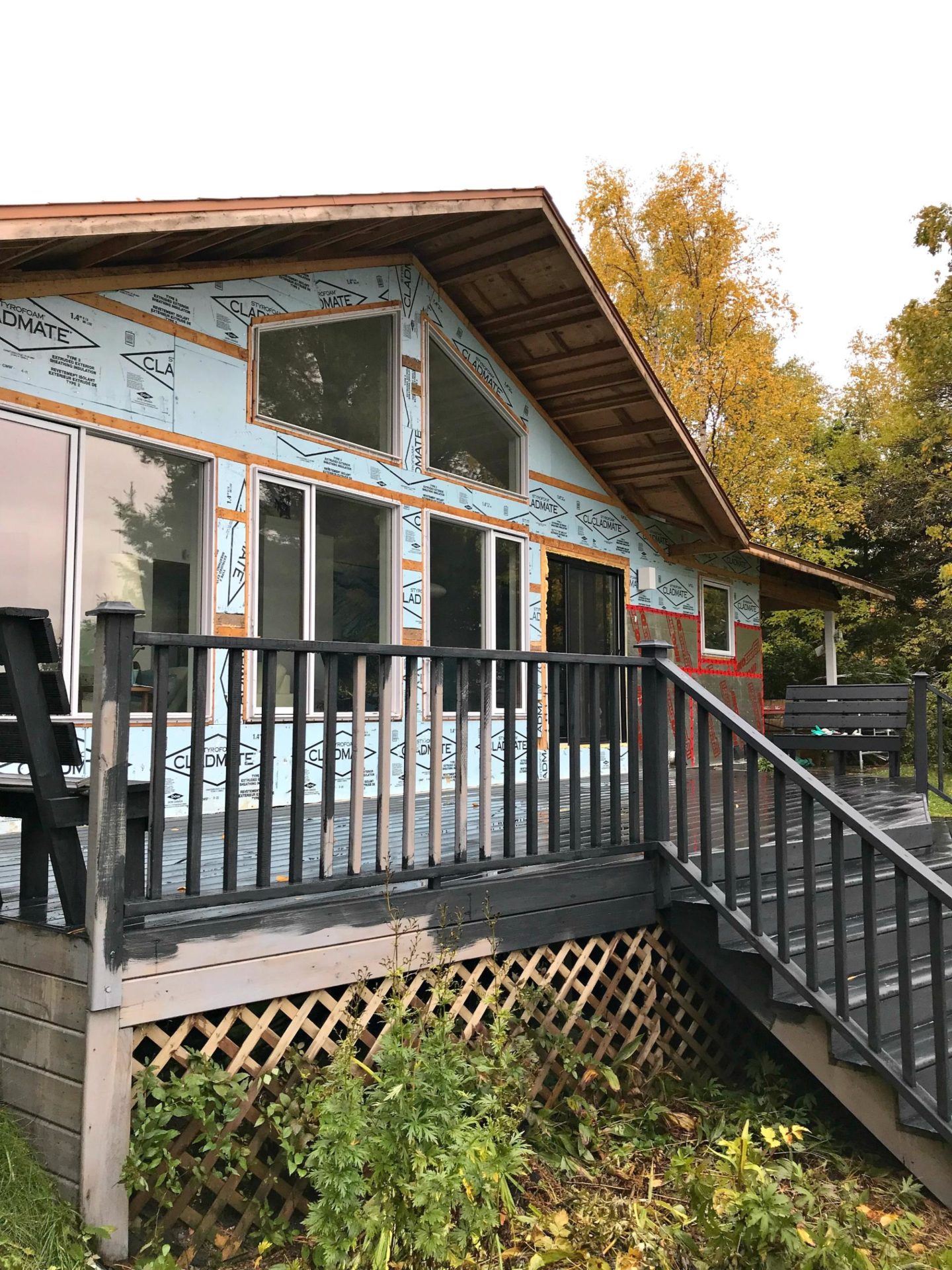 Well, crap.  But I persevered and found another three day stretch of no rain, and the second coat went on really well.  I used Olympic MAXIMUM Stain + Sealant in One (Solid) in Mystic Black.  I had been drawn in by commercials promising the 0ºC application, but it turned out that applied to the semi-transparent stain and I really wanted a solid matte black, which needs 2ºC and more time between rain.  It had really good reviews on the Olympic website but on the Lowe’s site the reviews are not good, so we’ll see how well it fares.  I did clean/prep the deck well (but I didn’t sand).  Ultimately, I would not recommend staining in the cold.  Even though it was just above freezing, I was SO COLD and of course I got stain on my skin which felt like I’d been plunged into the lake.  I found that it took a long time to dry/cure, even though it’s intended for cold weather applications.  But it looks good – the matte black stain did an amazing job restoring our worn and tired deck and hiding all of the stains and discoloration.  Plus it looks perfect with the black windows and soffit/fascia. 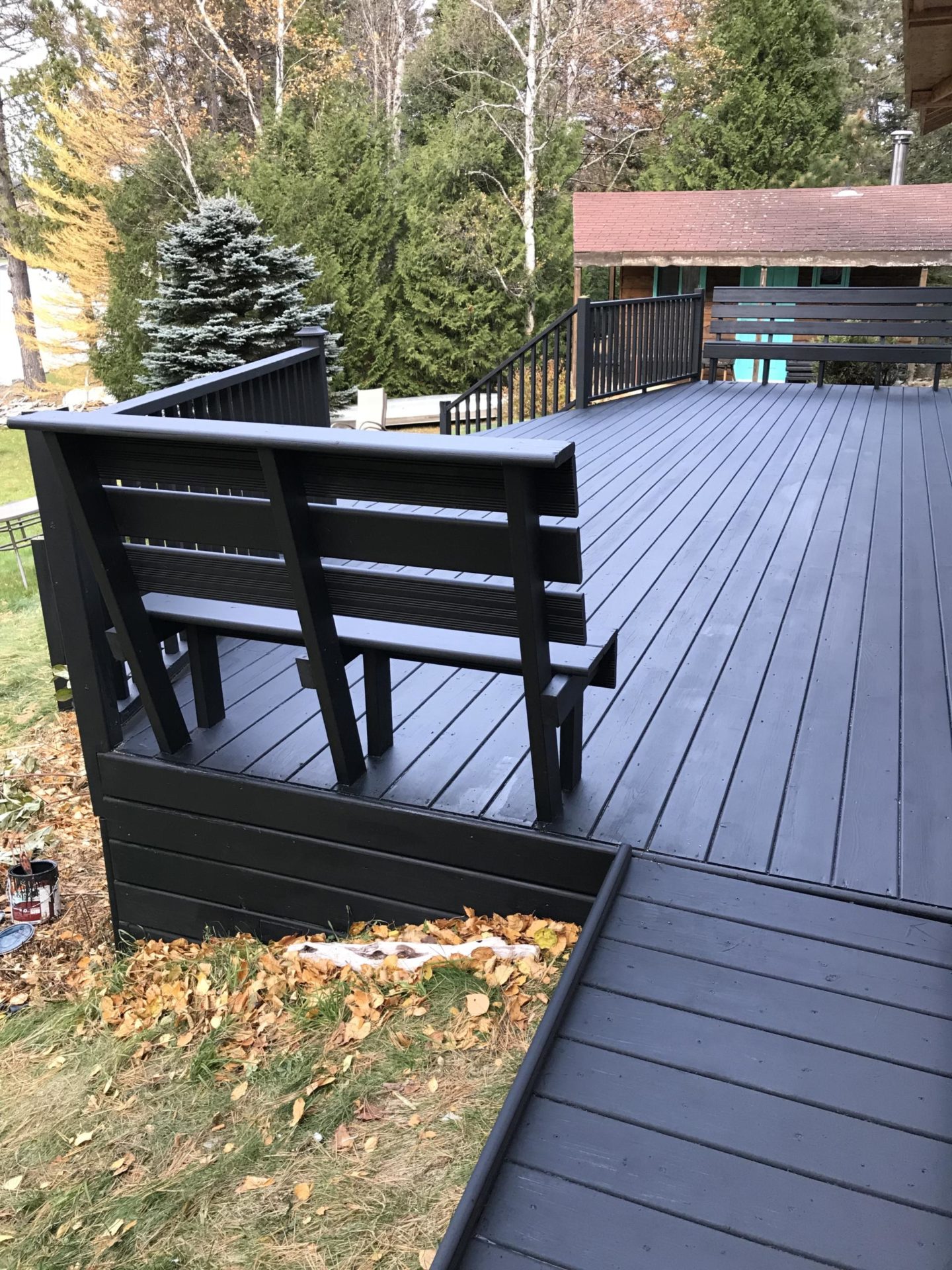 I was SO worried about getting it perfect because we can see the deck from the living and dining rooms.  But almost immediately in was covered in dust/scuffs from the siding installers, frost from mother nature and eventually heaps and heaps of snow. 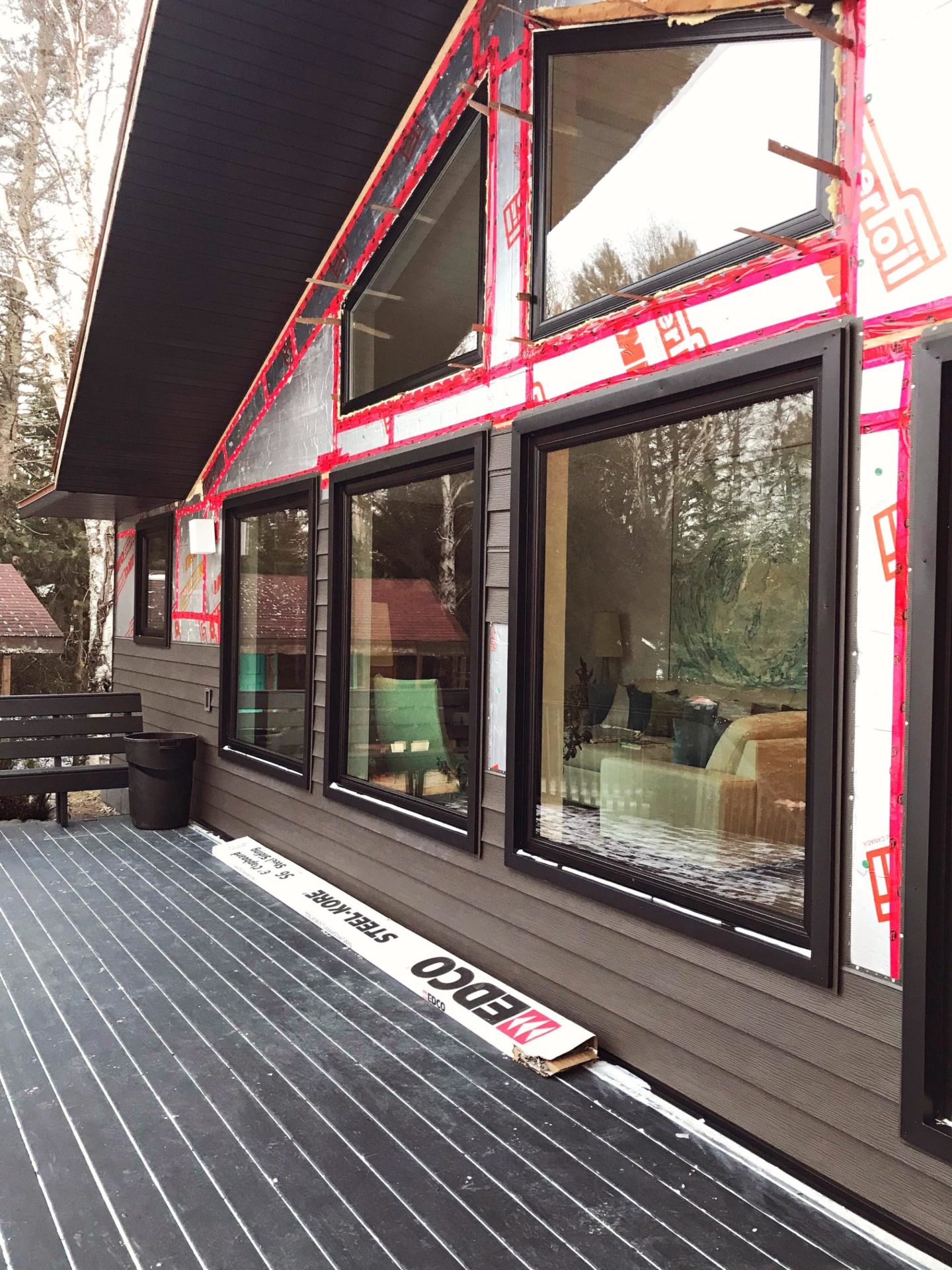 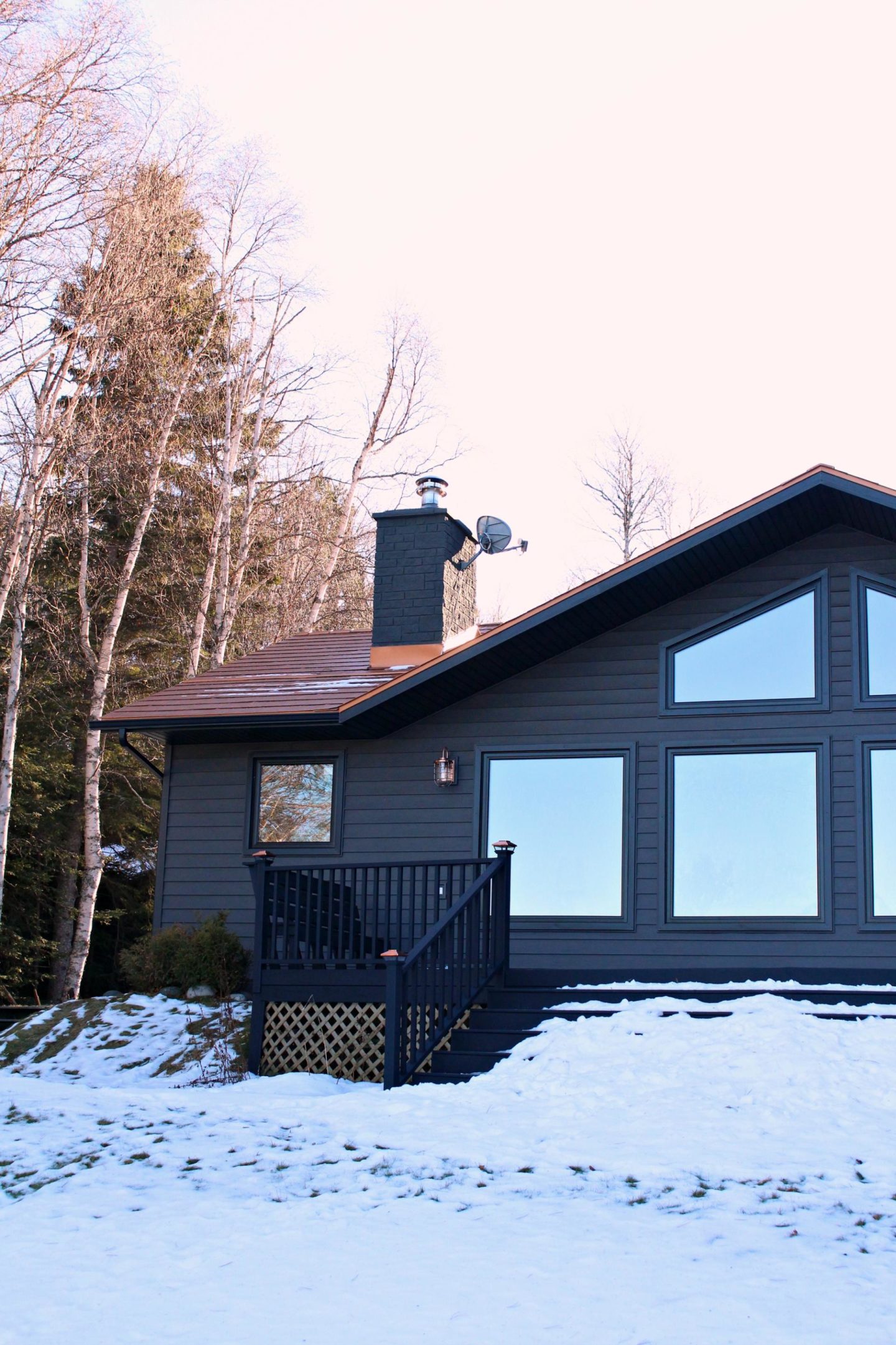 I don’t care though, because I’m so happy I got it done in time.  I’ve enjoyed looking out and seeing the black railings peaking out of the snow drifts, with the new copper solar deck caps!  We had ratty old wood deck caps so I removed those and installed new copper capped solar lights.  They’re so cheery at night.  The base of the copper caps is unstained wood, so I stained them black to match the deck, then I just had to screw them on – it was so easy.  I don’t see the exact one on the Home Depot website anymore – but this one is really similar and it’s already black.  It also comes in a white deck cap with copper top, but honestly Veranda makes so many stylish deck caps, in so many different finishes and styles. 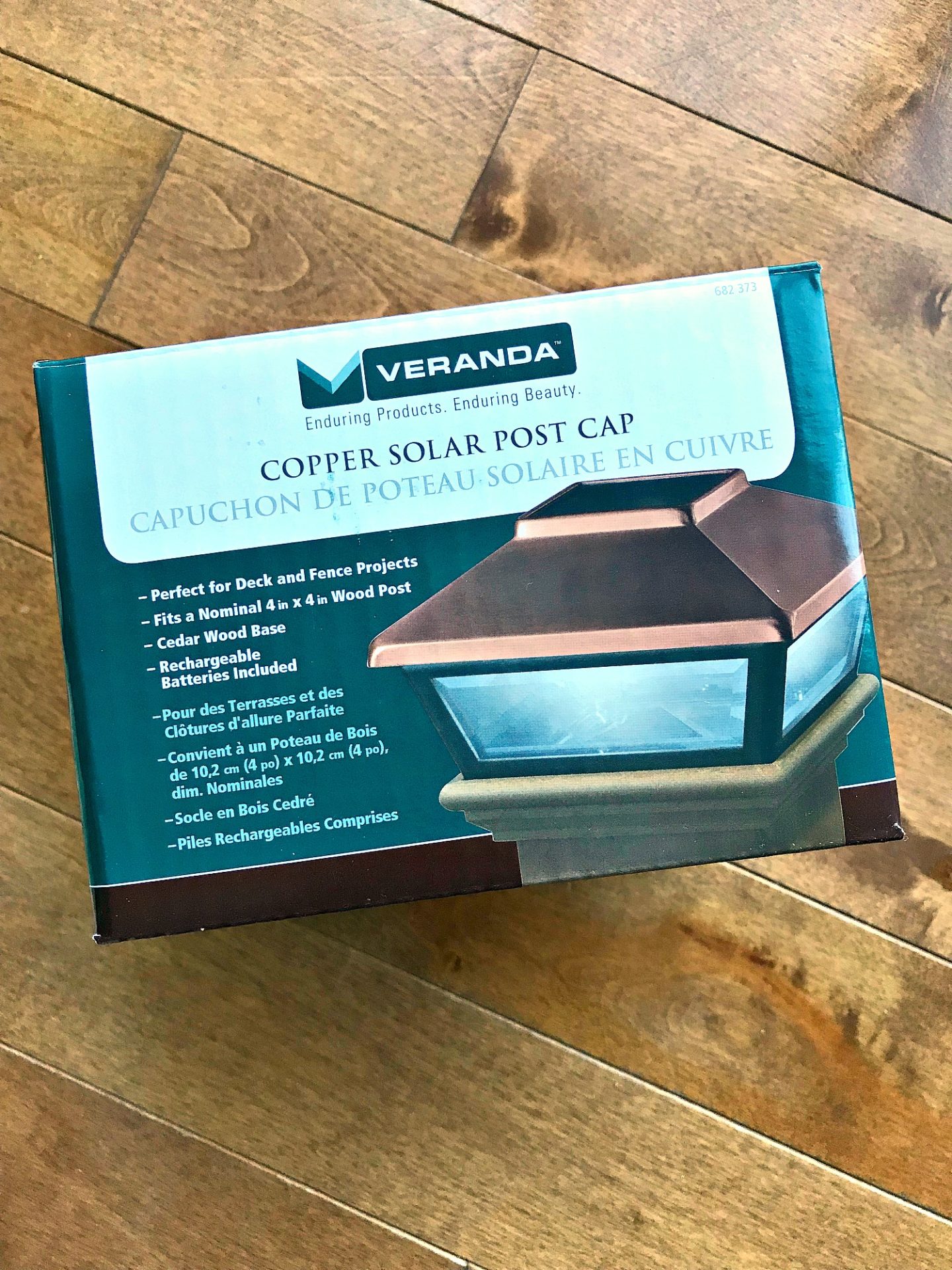 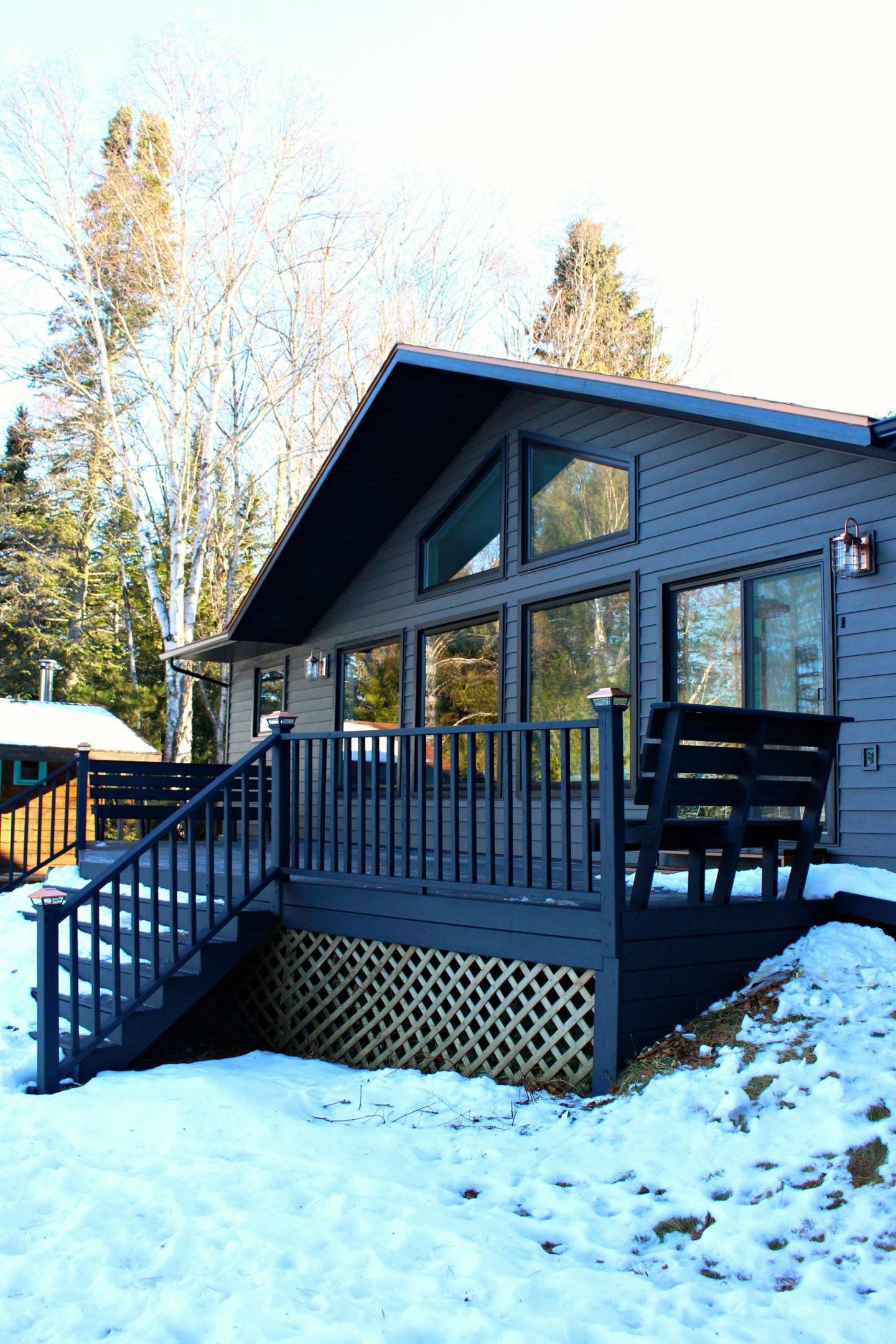 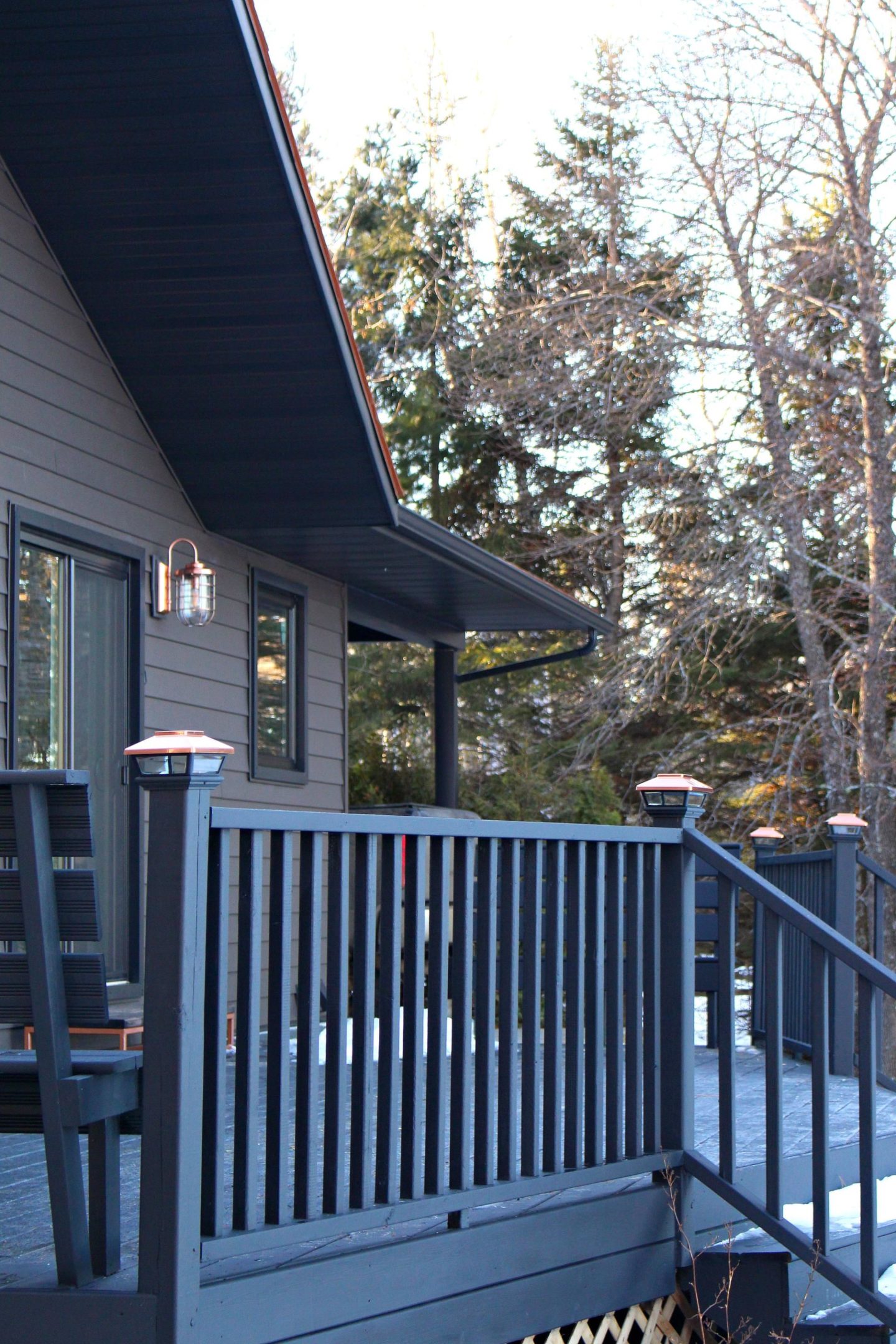 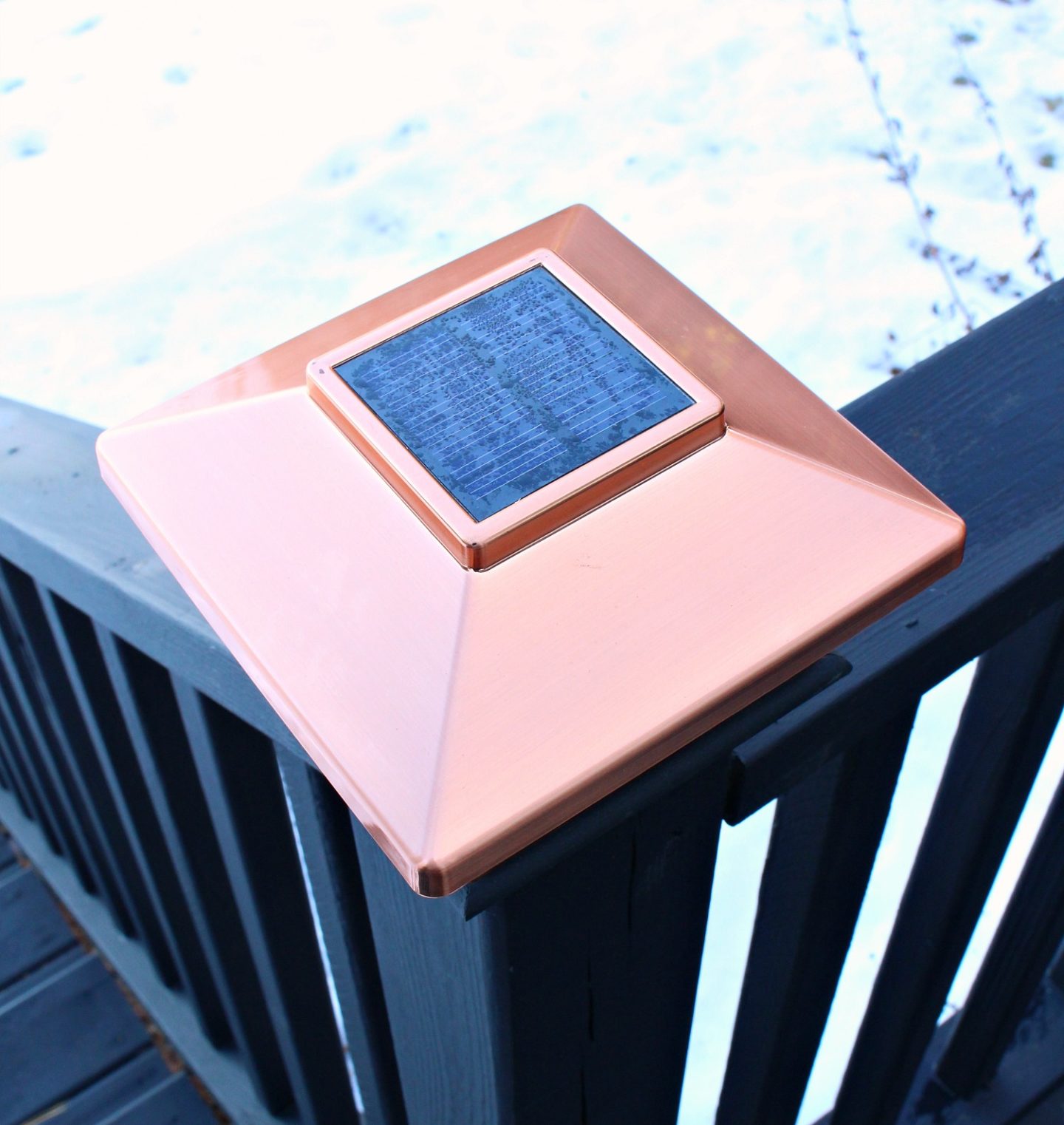 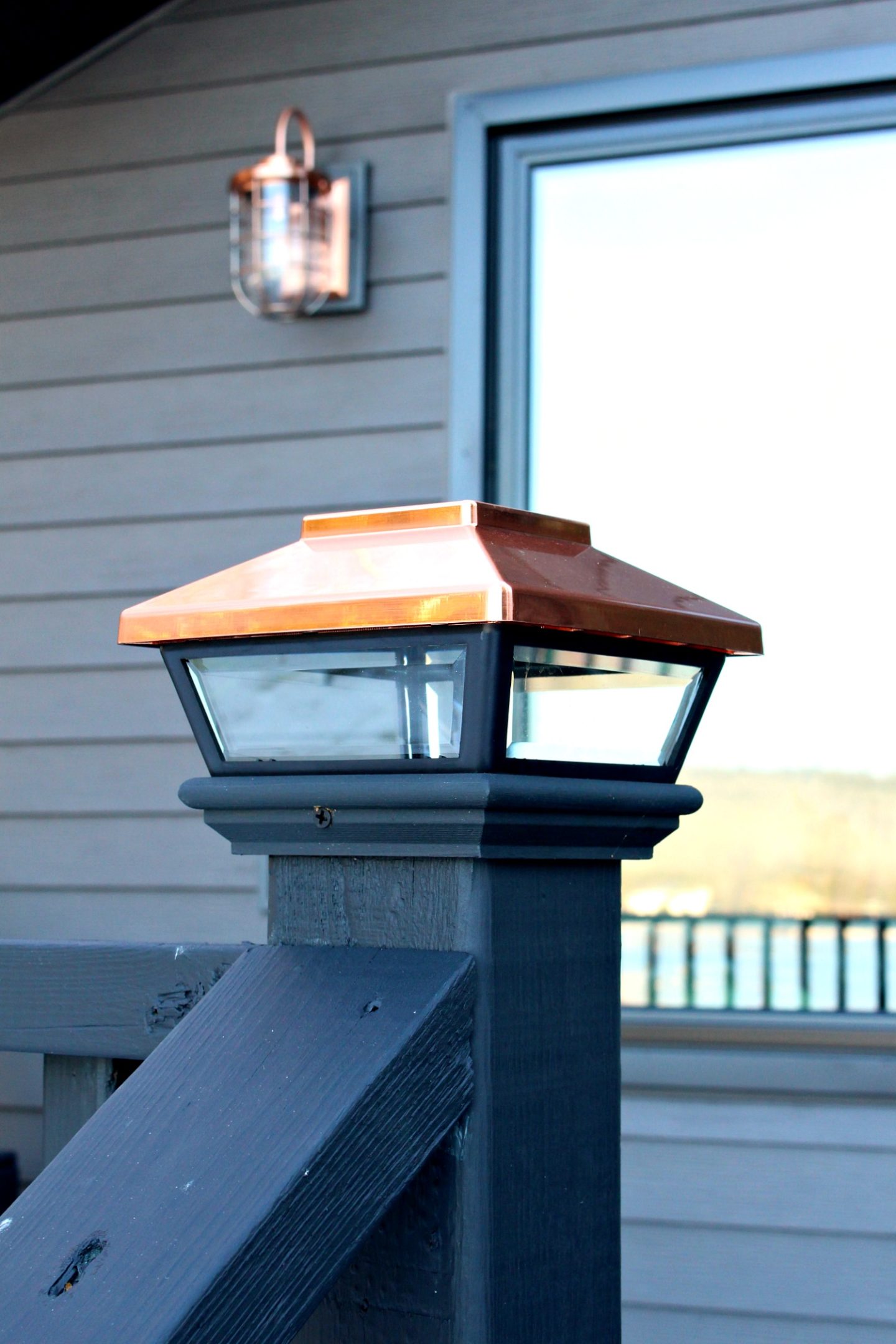 It’s no secret that I’m not a huge fan of mixing metals, so it should come as no surprise that I matched the new solar deck caps to the new copper roof and to the new copper outdoor sconces!  The solar deck caps have a solar panel on top and they collect sunlight all day.  Even in the winter, that gains us a few hours of glow time at night – I have been surprised by how long they glow, even on gloomy days.  Some days they don’t collect enough sunlight though, but those days are a rarity.  In the summer I’m sure we’ll enjoy many more hours.  We also installed one down by the water where our (copper!) fire pit is, and I can’t wait for summer bonfires.   Last summer I bought cute new patio loungers and deck chairs – and we have plans for a gorgeous welded patio table.  I’m so excited!!  I swear, when this winter is finally over I am spending every waking minute outside. 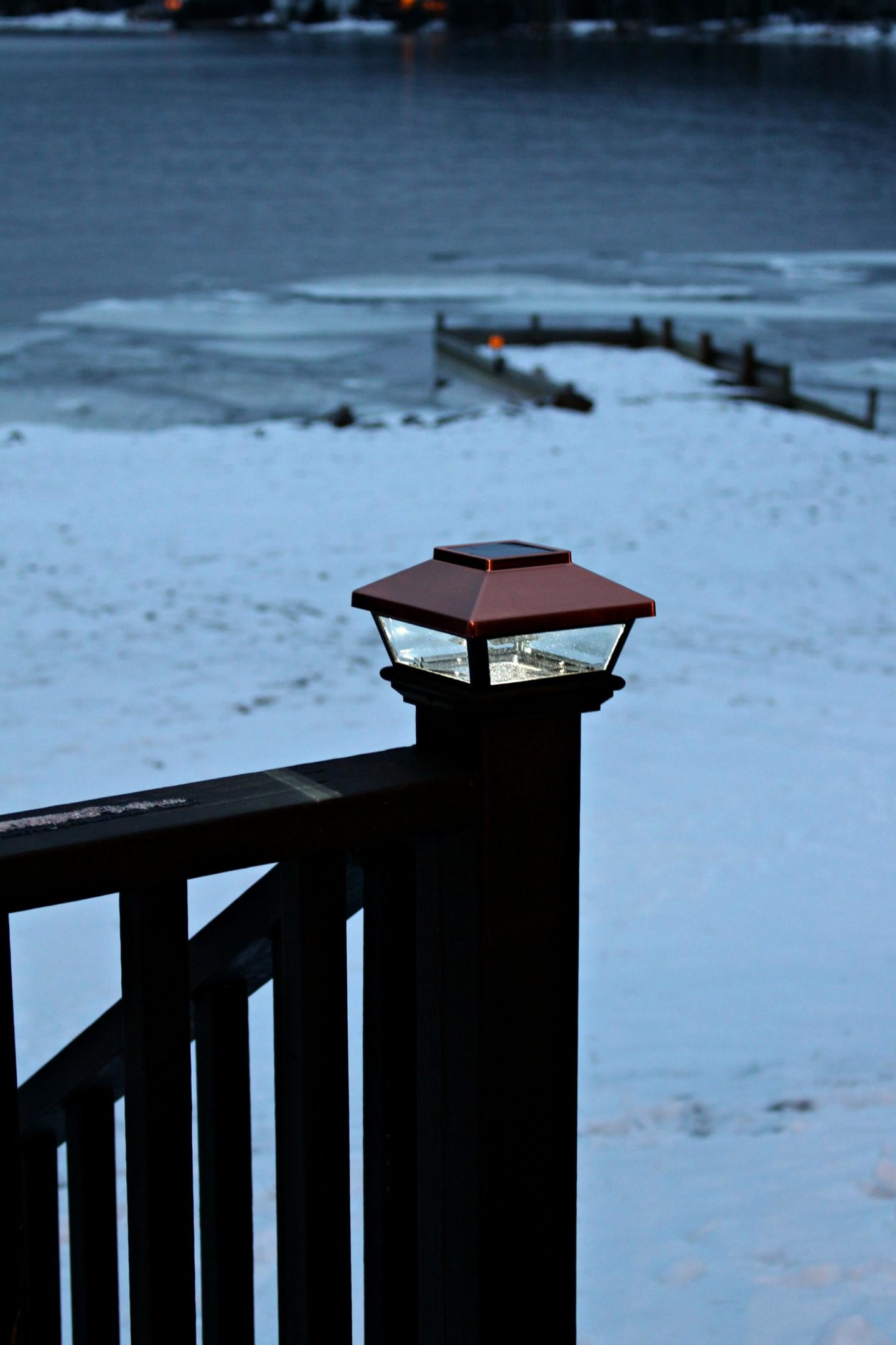 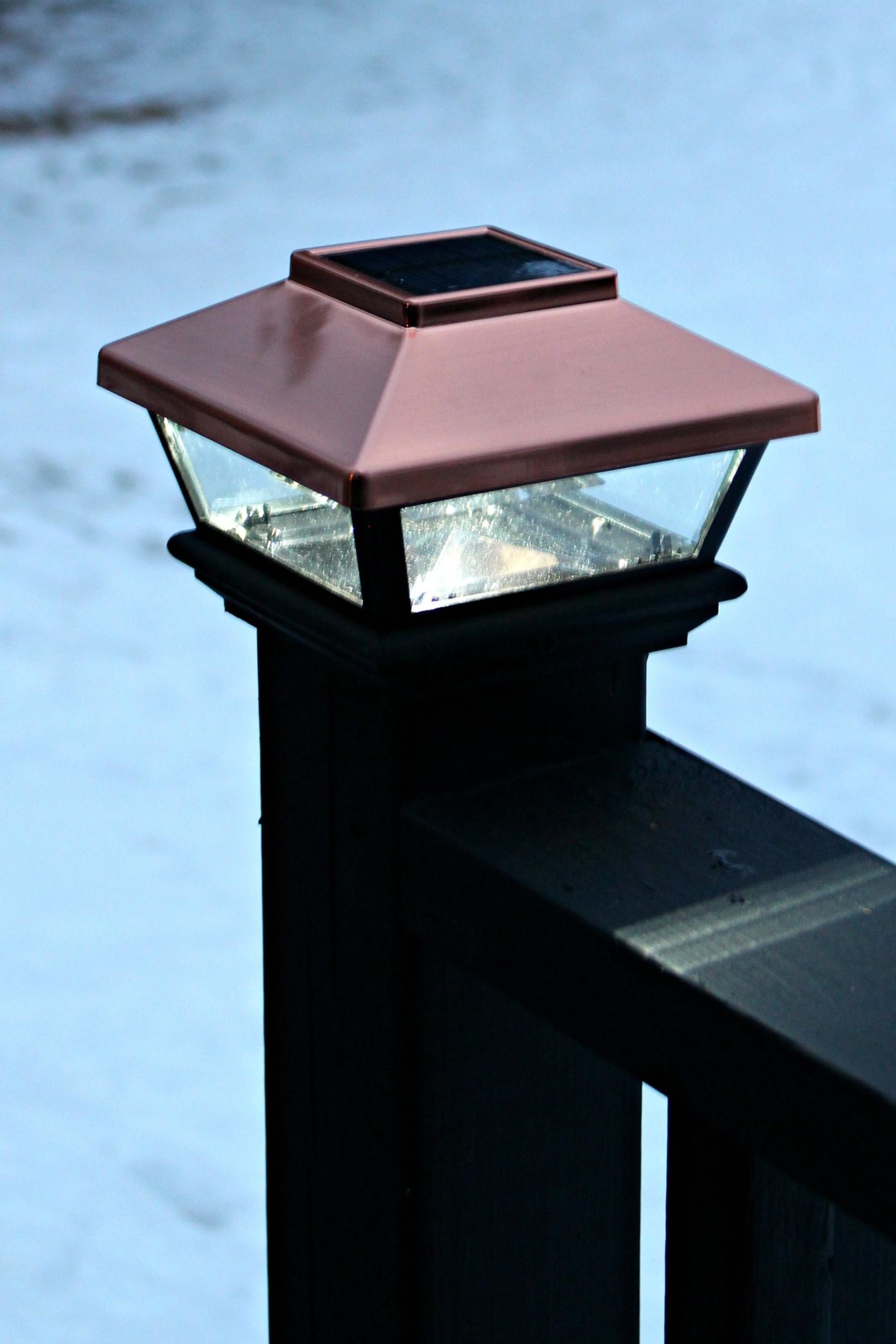 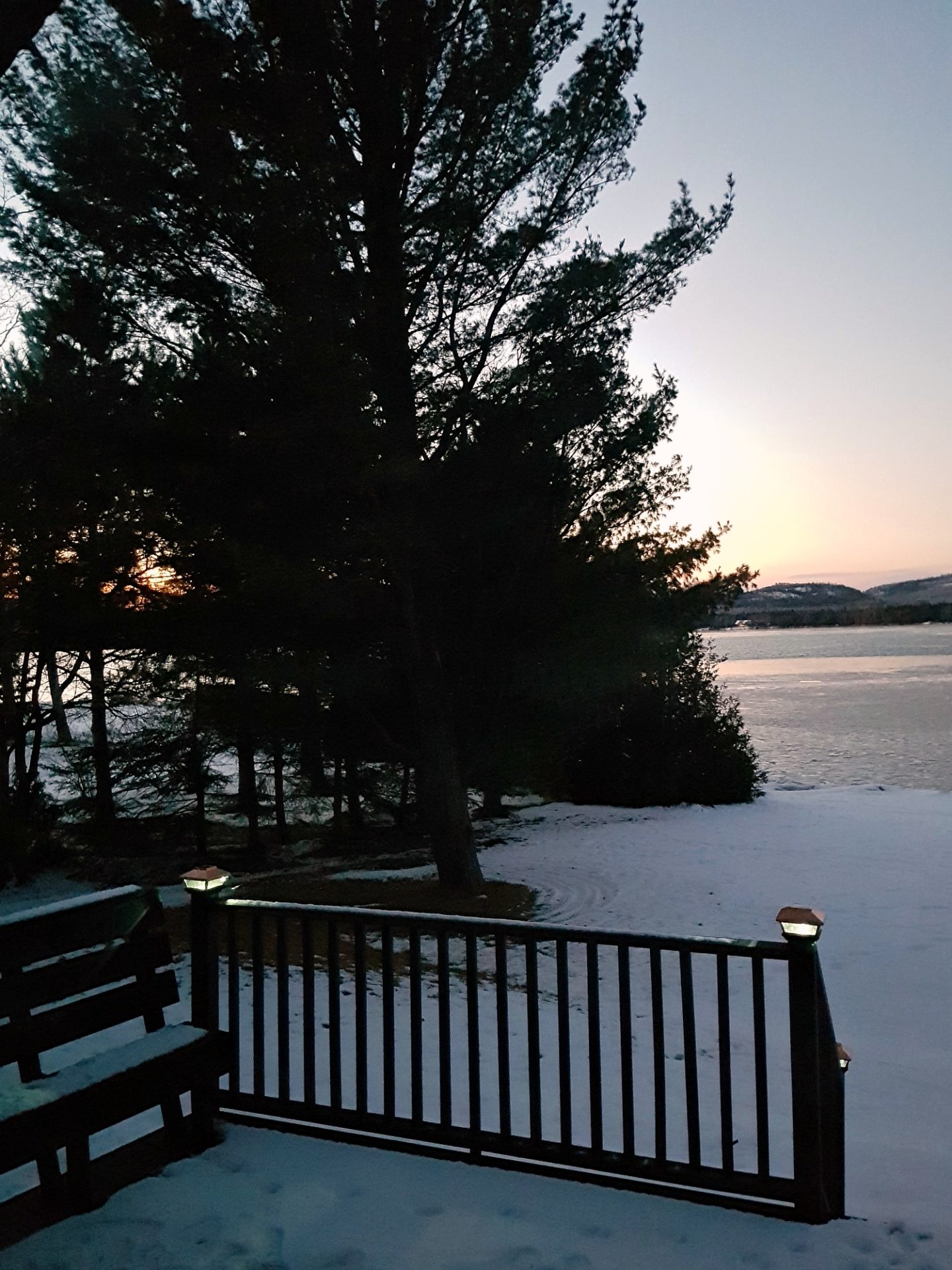 I’m still putting together posts about our new siding and windows, and the process involved.  But I wanted chat about the new look for the deck first, because I’ve gotten a ton of questions about those copper solar deck caps.  Sometimes I still can’t believe how different the house looks! 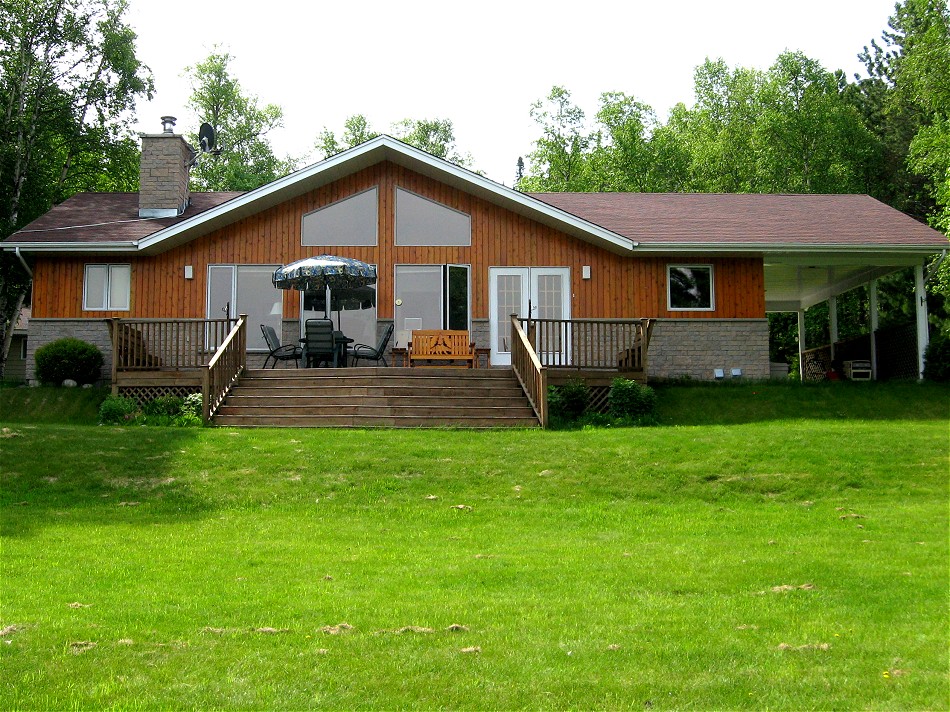 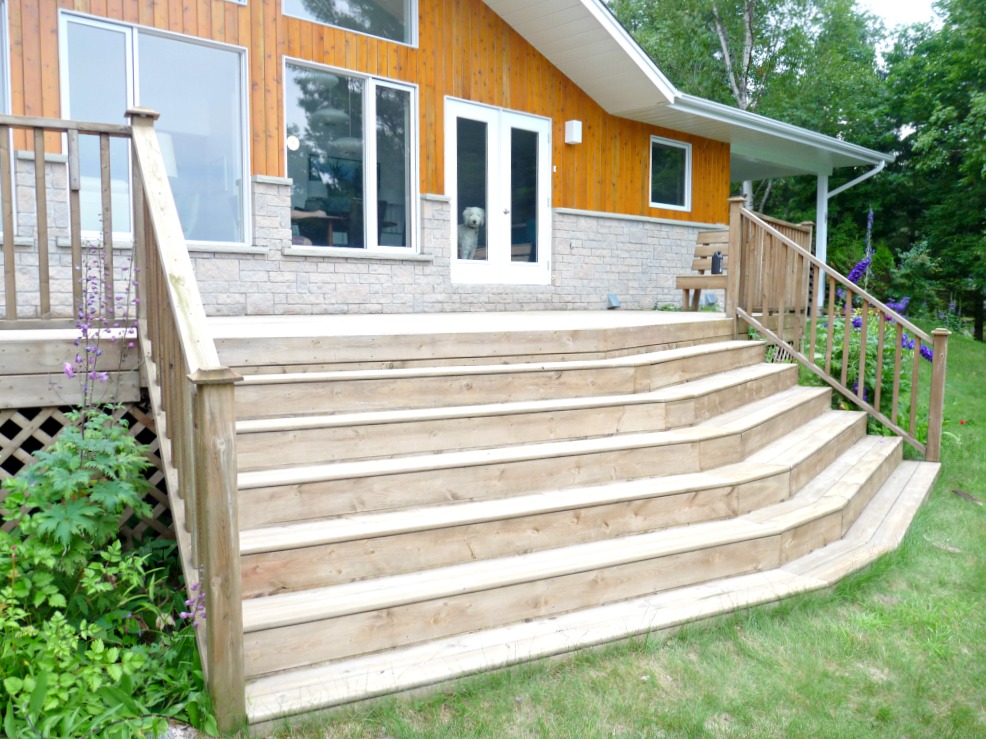 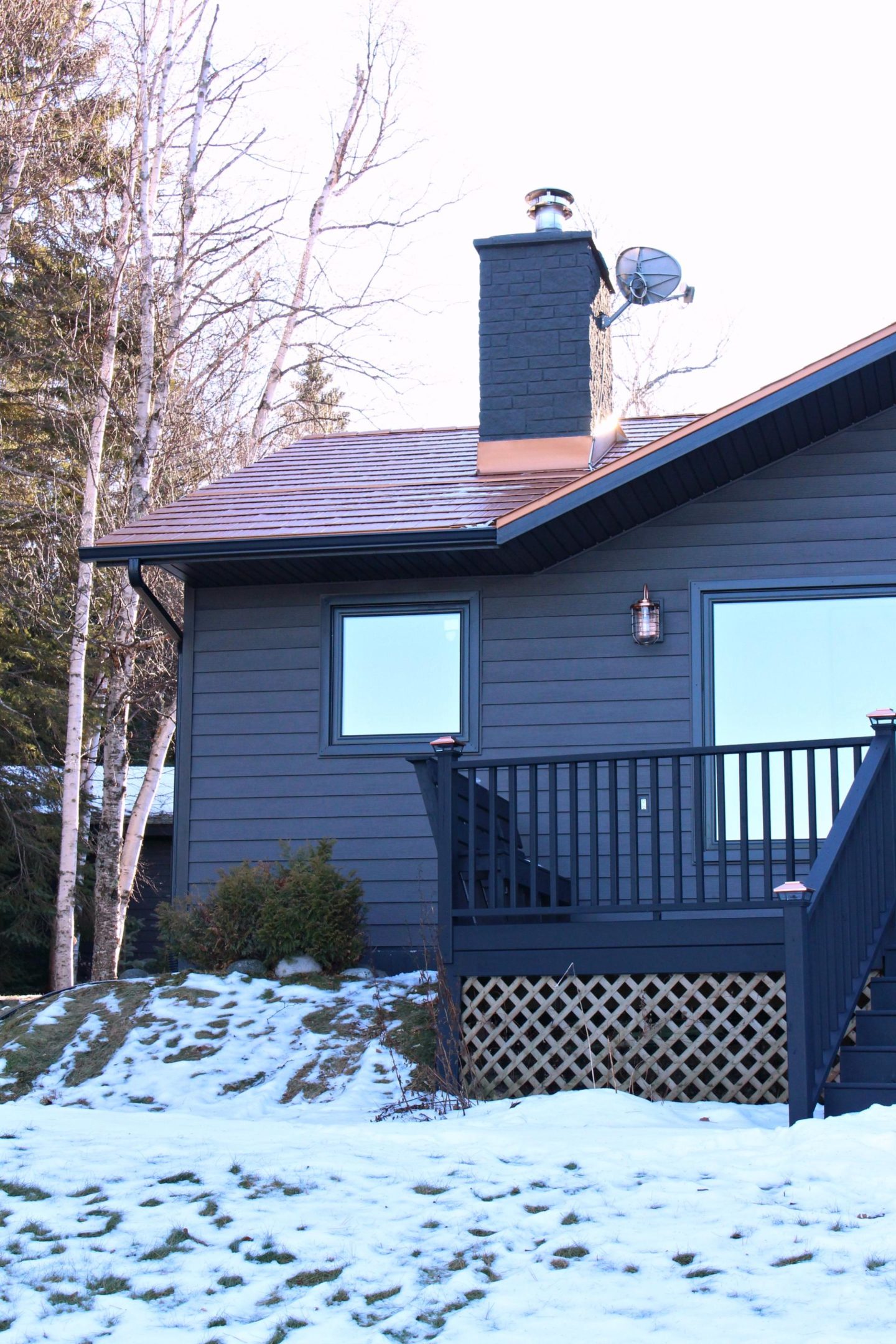 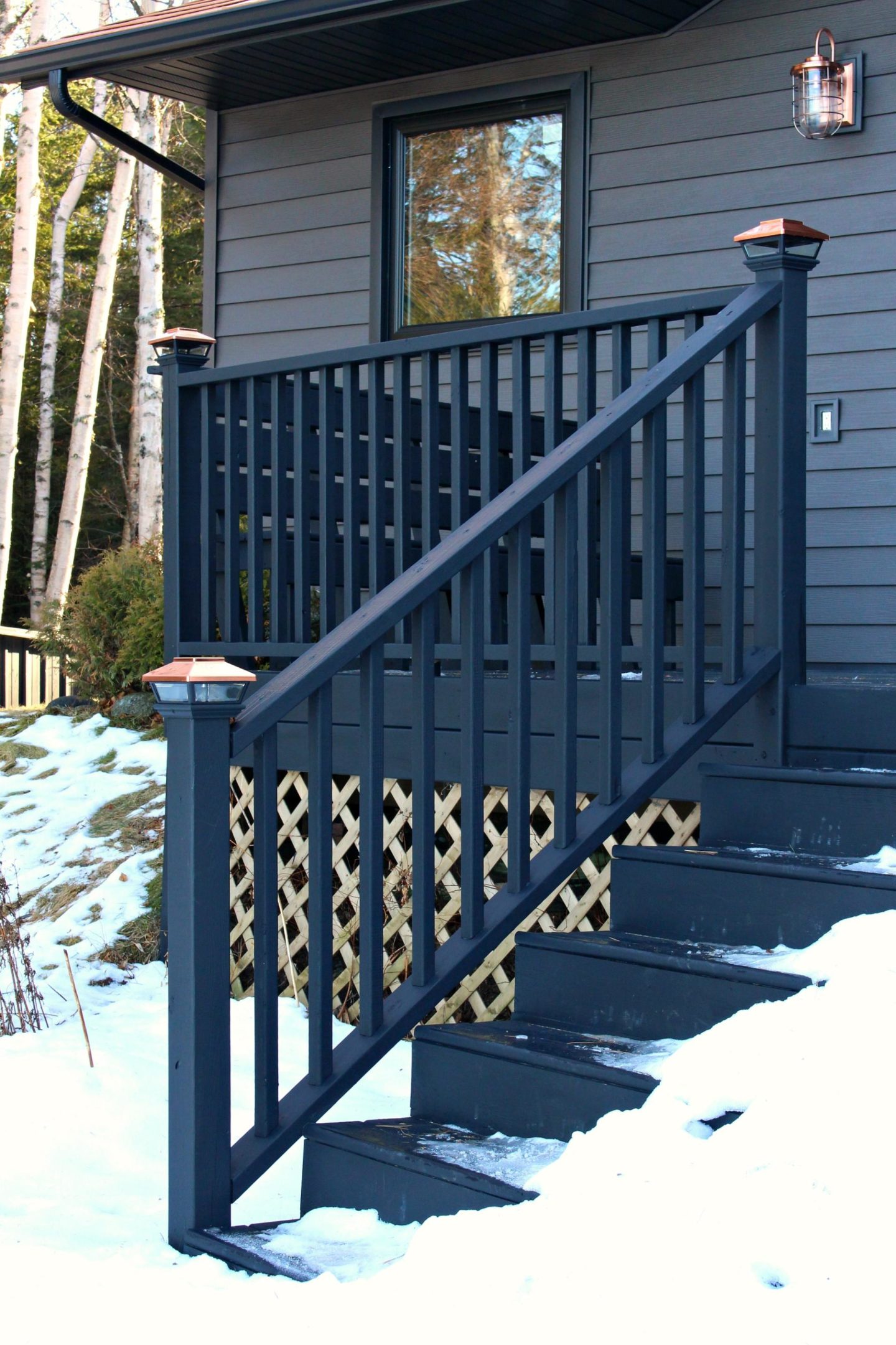 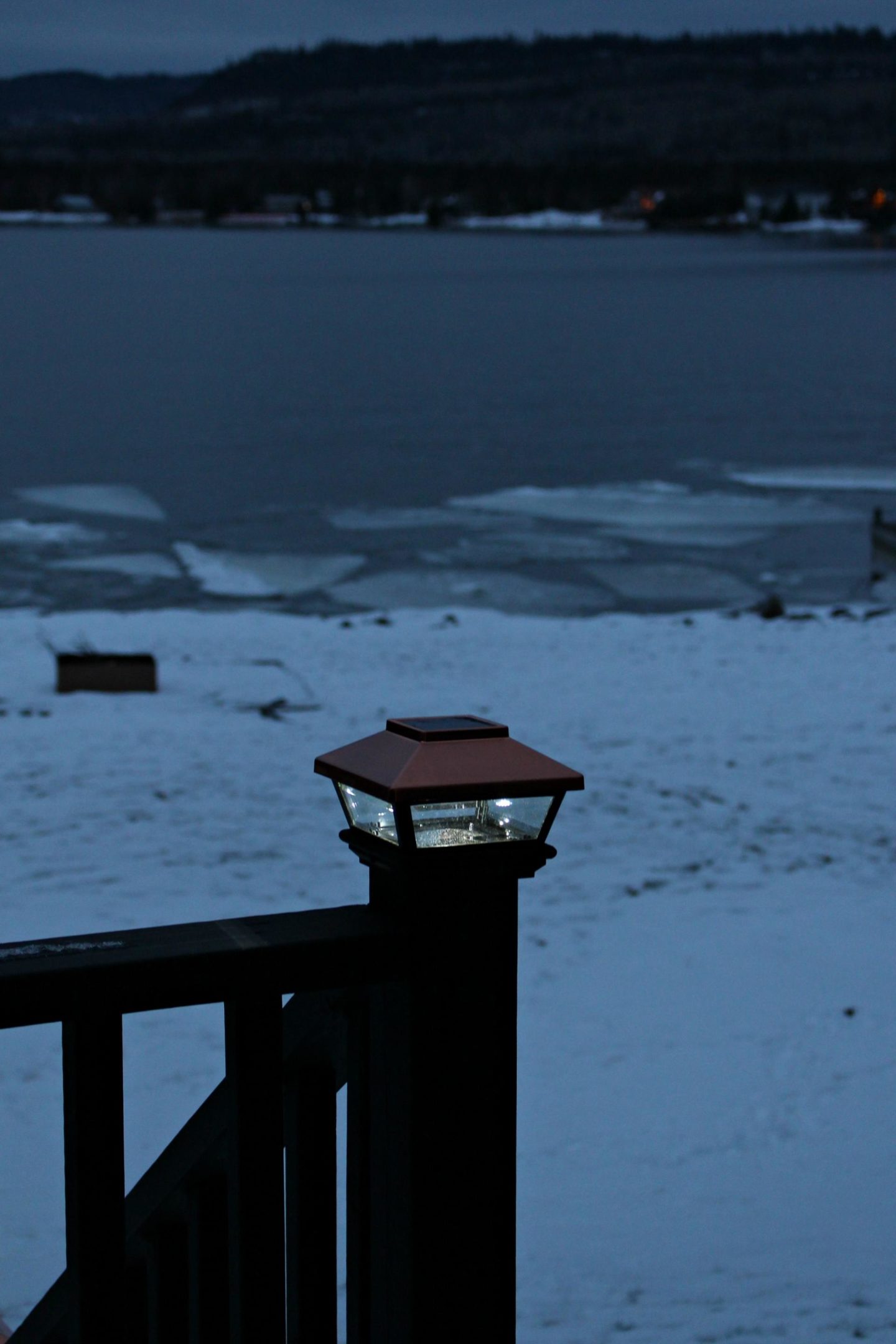 After spotting these deck caps at Home Depot, I reached out to Veranda and they generously sent along the copper solar caps for review.  I was not encouraged or paid to provide a positive review – I’m legit smitten with them and the lovely warmth they add to our deck.