After the sad de-roostering, my flock suddenly became very small.  When you order straight run chicks, you don’t know how many will be hens and how many will be roosters.  You just get mystery chicks.  Some breeds show sex linked characteristics when they hatch, but Ameraucanas (the kind of chickens I got) do not.  Usually it’s a 50/50 split, but I could have ended up 10 hens – or 10 roosters.  So I ordered 10 chicks (the minimum number for getting them shipped), bought two more locally, and hoped for the best.  In hindsight, I should have ordered twice as many chicks to end up with a nice flock of hens – but then that would have been a lot of chicks for a first timer like me! 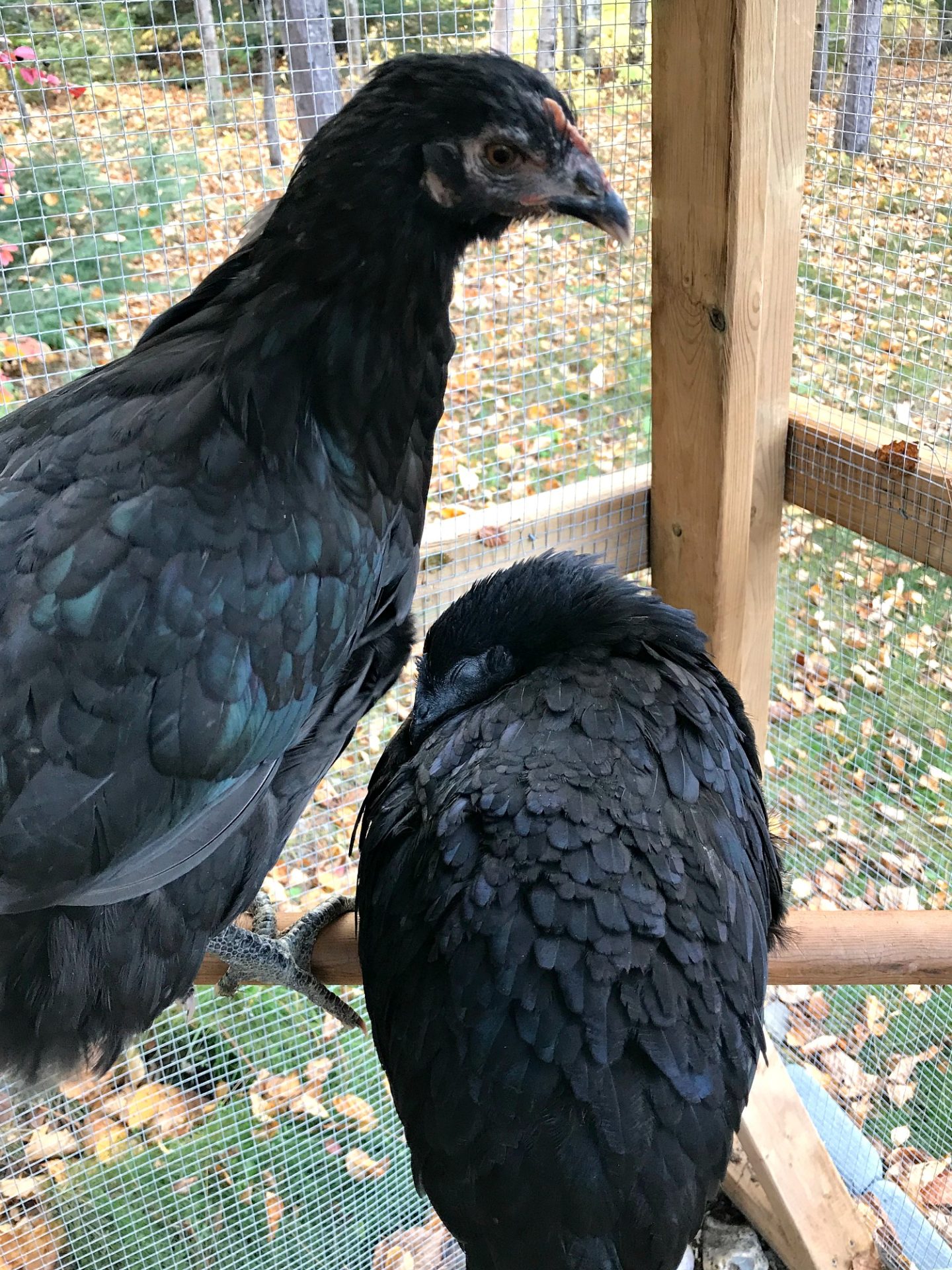 Why We Bought More Chickens

We ended up with only three confirmed hens – at the time, we weren’t 100% sure whether the Silkies were hens or roos – turns out we got one of each.  So actually I have three hens and a mini hen, lol.  I started to worry that the hens wouldn’t be warm enough in the winter.  We had built a coop and run with a larger flock in mind. 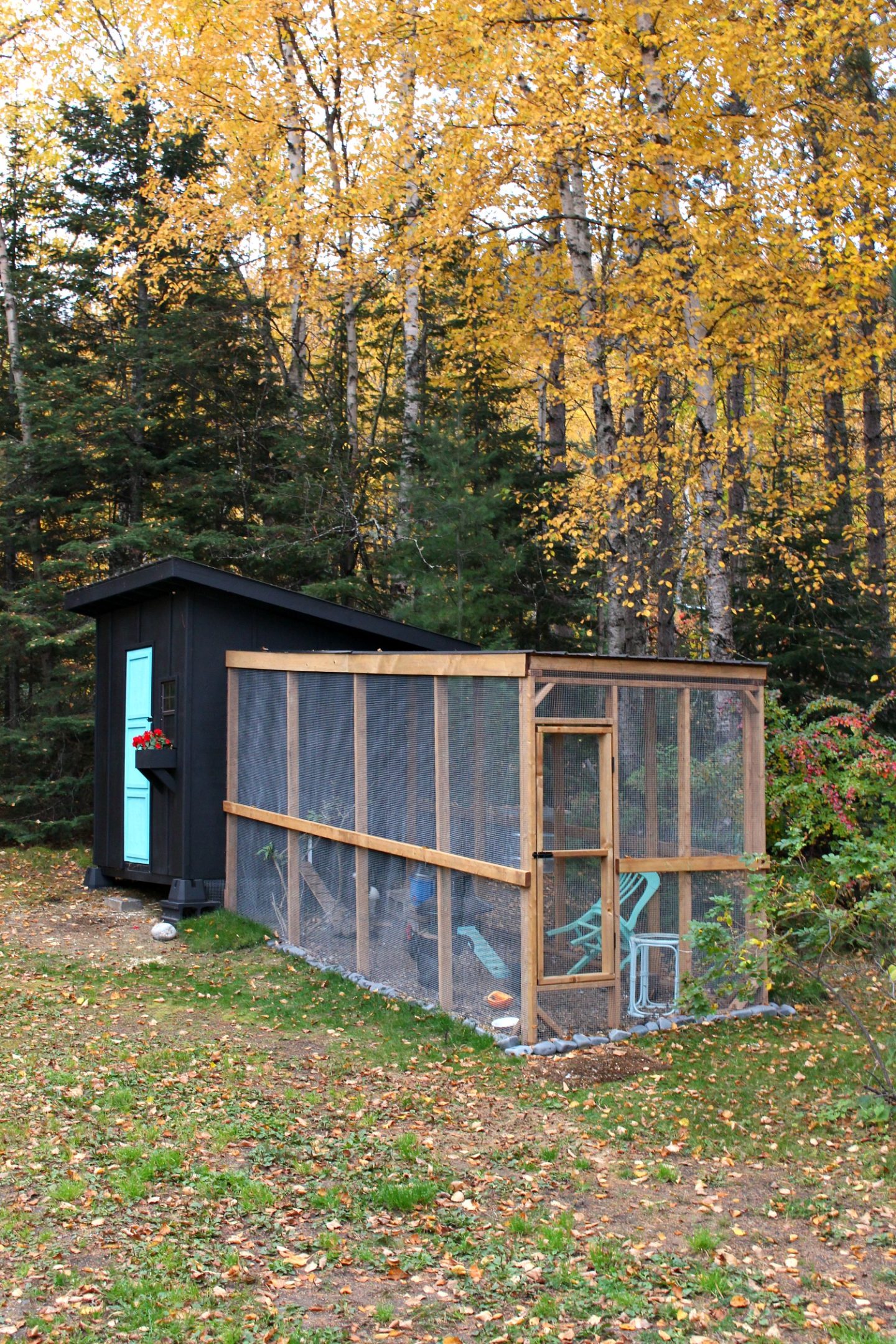 We’re counting on them to generate heat with their bodies – not uncommon in backyard chicken keeping because heat lamps can cause barn fires.  The coop is fully insulated, plus we’re planning to block some wind from gusting into the run (and of course the barn itself offers some shelter), but we still worried about them being able to handle the cold if there were only three hens in the coop at night this first winter.  Because I didn’t have time to raise more chicks before the cold weather set in, we decided to order four pullets (young hens) that were hatched in June, so they’d be about the same age/size as our chickens.  I decided to pick these four breeds: Ayam Cemani (rare, all black chicken – even the bones are black!), a black Austrolorp (same breed as Pewter, my fave roo), a Cream Legbar (another turquoise egg laying breed), and a Silver Wyandotte (because: pretty). 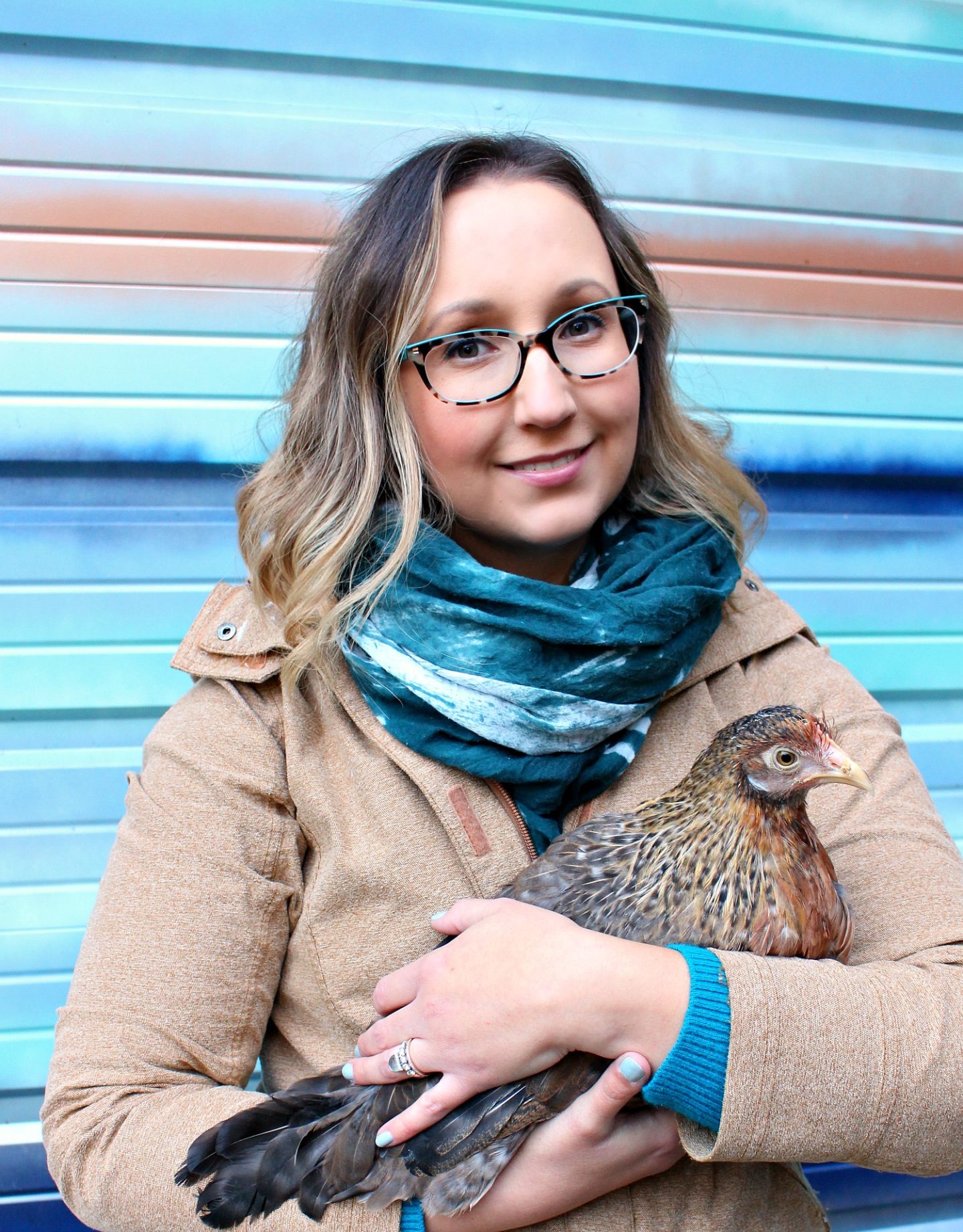 What Happened When We Got The Pullets

They arrived via an airplane, in a Rubbermaid tote with holes drilled in the sides.  They seemed…sleepy.  In hindsight, this must have been very distressing for them and I’m not sure I’d do it again.  Chicks seem a little more content with being shipped.

We brought them home right away and introduced them to the “Quarantine Coop” that we had built.  The Quaratine Coop is a mini coop and fully enclosed run, which we can move around the property.  It is fully enclosed in hardware cloth so it’s predator-resistant – plus we can lock it shut. 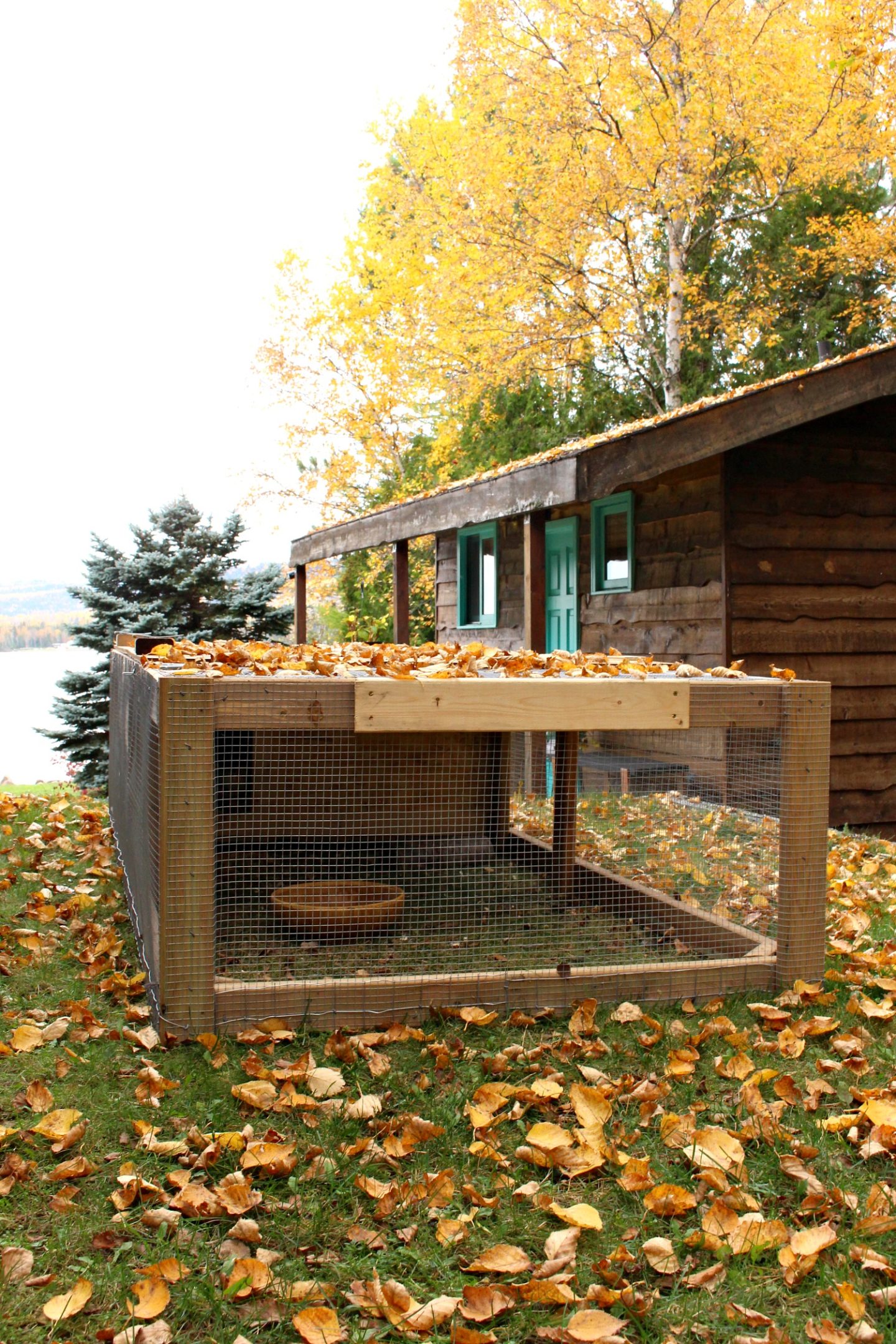 When you introduce new chickens, it’s wise to quarantine them – I’ve read that four weeks is advisable – so that’s what we did.

Right away, one hen (the Cream Legbar I’m holding in photos) started breathing oddly – kind of a purring, gurgling sound – so we separated her into a second Quarantine area, which was located in my office!  I tried to nurse her back to health for nearly a month.  I read backyard chicken forums and Googled my eyes out.  All signs pointed to a respiratory infection so I ordered antibiotics and VetRX to treat her.  I also tried to naturally treat her, using herbs and garlic.  Nothing worked!  Her congested breathing continued, as did the runny nose I noticed once I had her inside.  She was definitely congested, but no other symptoms presented to help narrow down what her illness could be – other than the broad category of “respiratory”.  I finally called the only livestock vet in town who, once again, refused to see a chicken.  He did permit me to purchase a different kind of antibiotic, stronger and more broad than what I had bought online.  That didn’t do anything either.  We were told by many to put her down, or risk endangering our whole flock.

Adding Chickens to an Existing Flock is a Risk

Ordering pullets puts everyone (the new chickens and my flock) at risk and I knew that going forward.  Even the newcomers who showed no symptoms could be carriers of something.  And the travel was undoubtedly taxing for them.  But there was no time to raise chicks again (which are typically less risky in terms of infecting an existing flock and carrying disease).  I worried my hens might freeze without extra body heat so I had to weight the options: potentially freeze or potentially contract some illness.  Chickens can get ill from wildlife, things brought into the coop on our boots – it’s not like I can totally prevent illness.  The other three hens never looked sick, so I took a chance.  But in the weeks before, I fed my chickens lots of healthy treats and made them a veggie mash with garlic to help make sure they were strong and healthy.  I introduced the remaining three new pullets to my flock – slowly.

At first, the new chickens were housed within sight of the existing flock and Pewter was hilarious.  When the flock went to sleep, he stood inside the run calling to the new chickens – who were in their own Quarantine Coop.  He ran back and forth, calling to them – I thought he’d be welcoming!  We moved the newbies out of site – just to get them on flatter ground – but then when it came time to introduce them, I let them see each other, but be contained in their two different areas, for a week and then introduced them overnight.  I read that introducing them in pairs helps – that a single chicken will get bullied.  Things were rocky in the beginning – the Austrolorp was really pecked – but things have mellowed a bit a couple weeks later.  Oddly, Pewter isn’t as welcoming as he once was – he hasn’t tried to mate with the newbies, not even the chicken of the same breed as him!  It seemed to help that I spent a lot of time with them and touched/fed the newcomers and existing flock.  There is still some light bullying and the three newbies tend to stick together while the old flock chases them around a little.  I hope they integrate fully soon, so they can all snuggle together in winter. 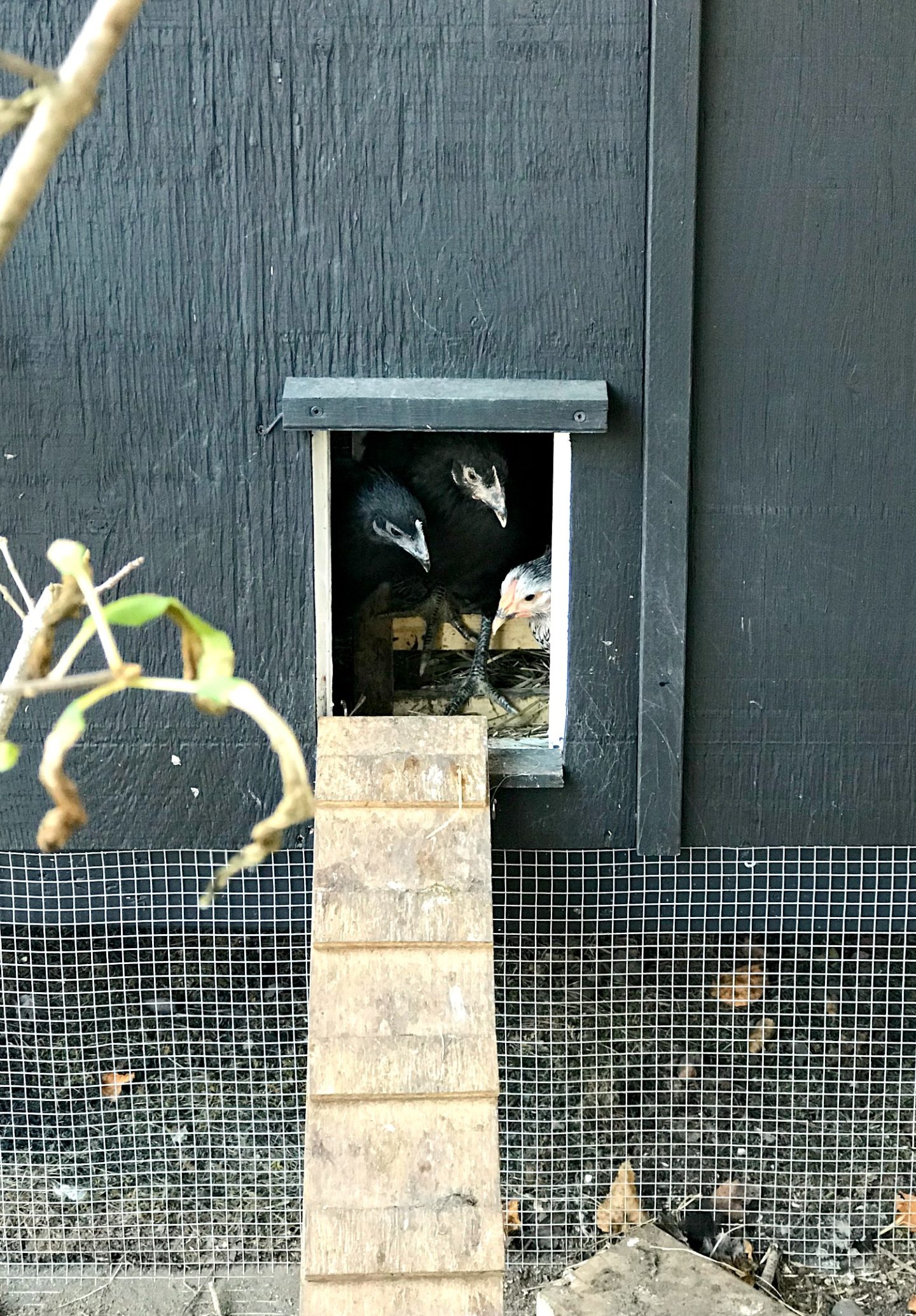 Saying Goodbye to the Fourth Pullet

The fourth pullet never got to meet my flock, but I couldn’t put her down either.  Having to cull a chick and give away my roosters left the chicken part of my heart too raw.  I decided instead to put up an ad on Kijiji, offering her for free.  I explained, in depth, her symptoms, the treatment I had given her, and the risk.  People’s flocks are wiped out all of the time, from predators or illness, and I hoped that maybe there was some flock-less person with a chicken coop set up, willing to nurse her.  She did really well in my office – she was calm and snuggly – she would have done well as a house chicken because she really bonded with people.  Surprisingly, more than one person responded to my ad and a woman who lives about 45 minutes away offered to take her.  She and her husband love chickens and were experienced, having nursed other chickens back to health.  I delivered Beryl (her name), a couple weeks ago and when I was there, she gave me a tour of the coop and her somewhat rag tag flock of different breeds.  She had 30 chickens earlier this summer, but a Coyote had reduced her flock to 11.  They had dealt with the Coyote problem, but now had a much smaller flock.  She welcomed Beryl and promised to care for her.  It was curious to me she wasn’t worried about infecting her flock, like I was (I was also worried my flock would bully her with her illness – chickens do that), but some people are a little more relaxed than I am.  I was sad to see her go – she was quickly becoming a favorite – but I’m happy to have found her a good home.  I’m trying to be a responsible chicken owner but I know I’m making mistakes. 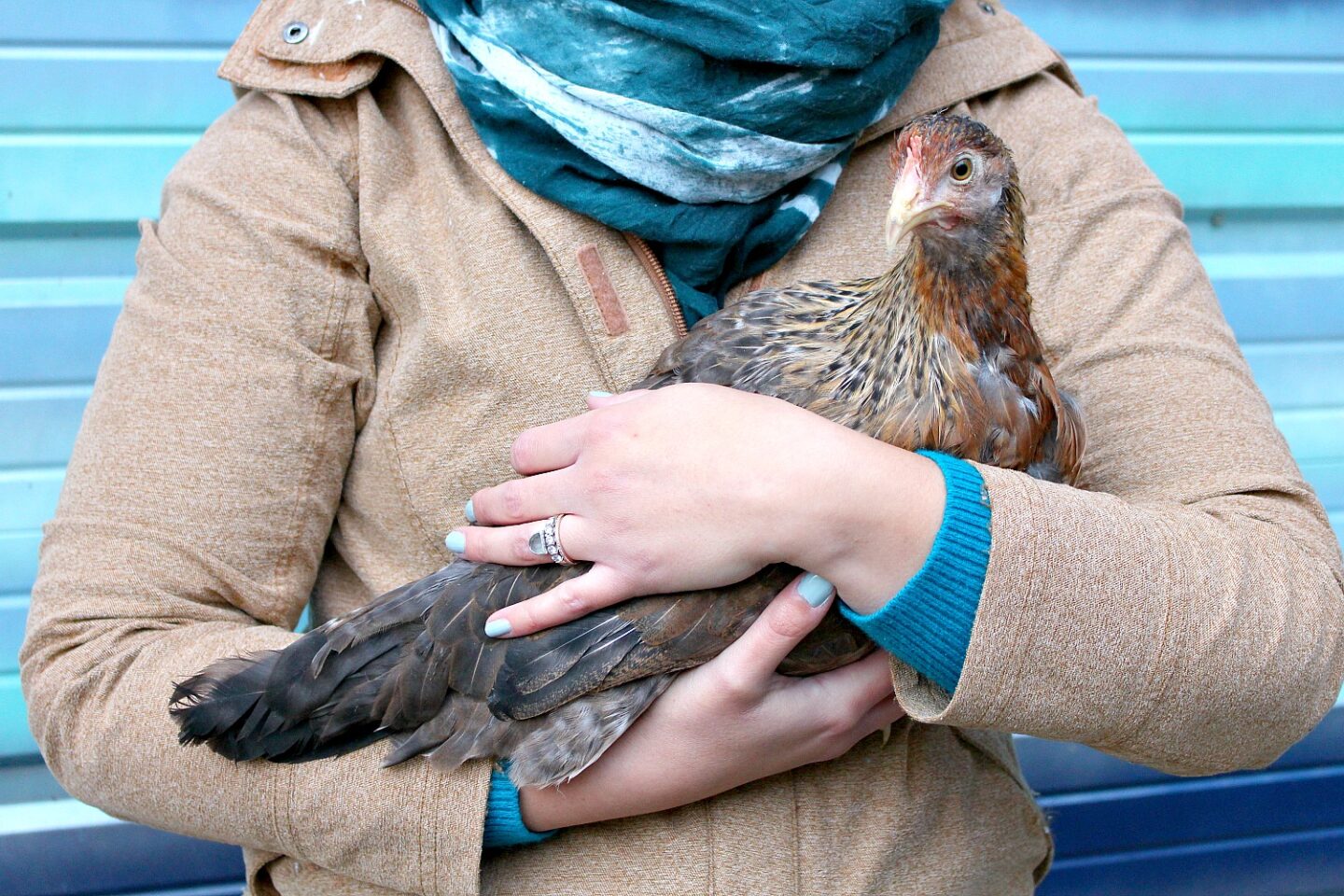 Keeping chickens has been a much different experience than I thought – way more rewarding than I could have imagined, but also much more difficult.  I share these stories because chicken keeping can be sort of romanticized on social media.  In reality, it’s a lot of poop and difficult decisions.  Like my father in law keeps reminding me, “if you have livestock, you have deadstock”.  But I love having chickens.  Most of the time, it’s very relaxing and I love spending time in the chicken run.  My chickens have warmed up to me since I took away so many of the roosters, and they have started greeting me again.  I still miss my roos, but we’ve all moved forward.  I’ve had to learn to let go because I was never supposed to keep roosters in the first place.

Having said that, I’ll soon be saying goodbye to Pewter, my favorite chicken – my big roo.  I bring him to his new home on Friday but I just can’t talk about that yet (cue the tears).