Yesterday I shared the tutorial for my easy winter window box and you caught a glimpse of my DIY pom pom wreath idea (x 3), plus my holiday chicken coop decor.  I had originally planned a TON of lights for the coop, but Hubby and I spent so much time installing the water heater, the wind break material on the run, etc., that holiday decor took a back seat.  There are some things we still need to adjust/tweak, so that we can keep the chickens as comfortable as possible this winter, but I wanted to have a little fun.  So I opted for simple pre-lit faux evergreen garland around the door, which I hung by stapling (will I regret that, lol?). 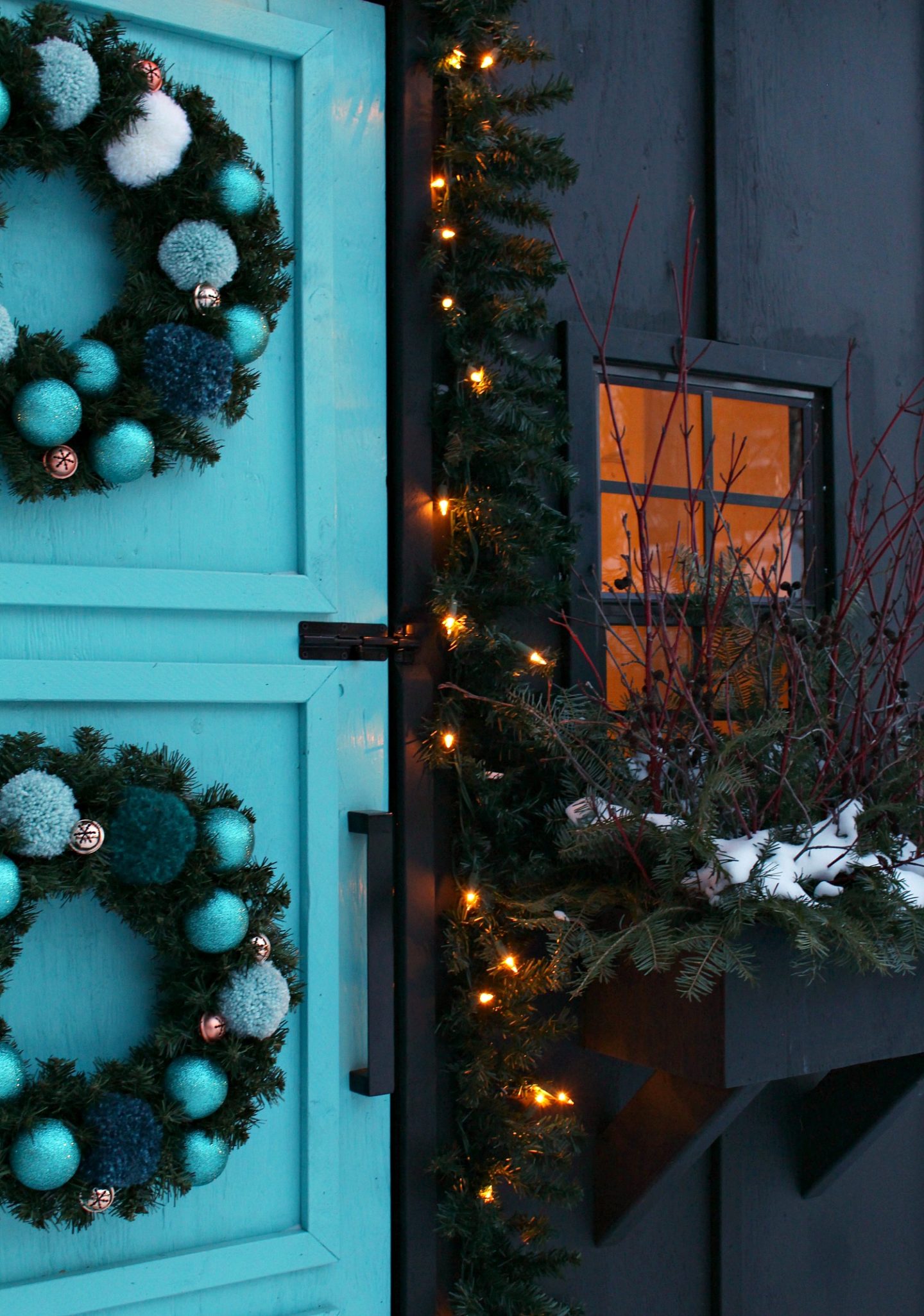 I also hung three DIY pom pom wreaths on the door, and then I quickly pulled together that easy, foraged winter window box decor you saw yesterday.  It was easy to put together, but I think the holiday coop decor looks super cute and I can build on it and add more lights next year. 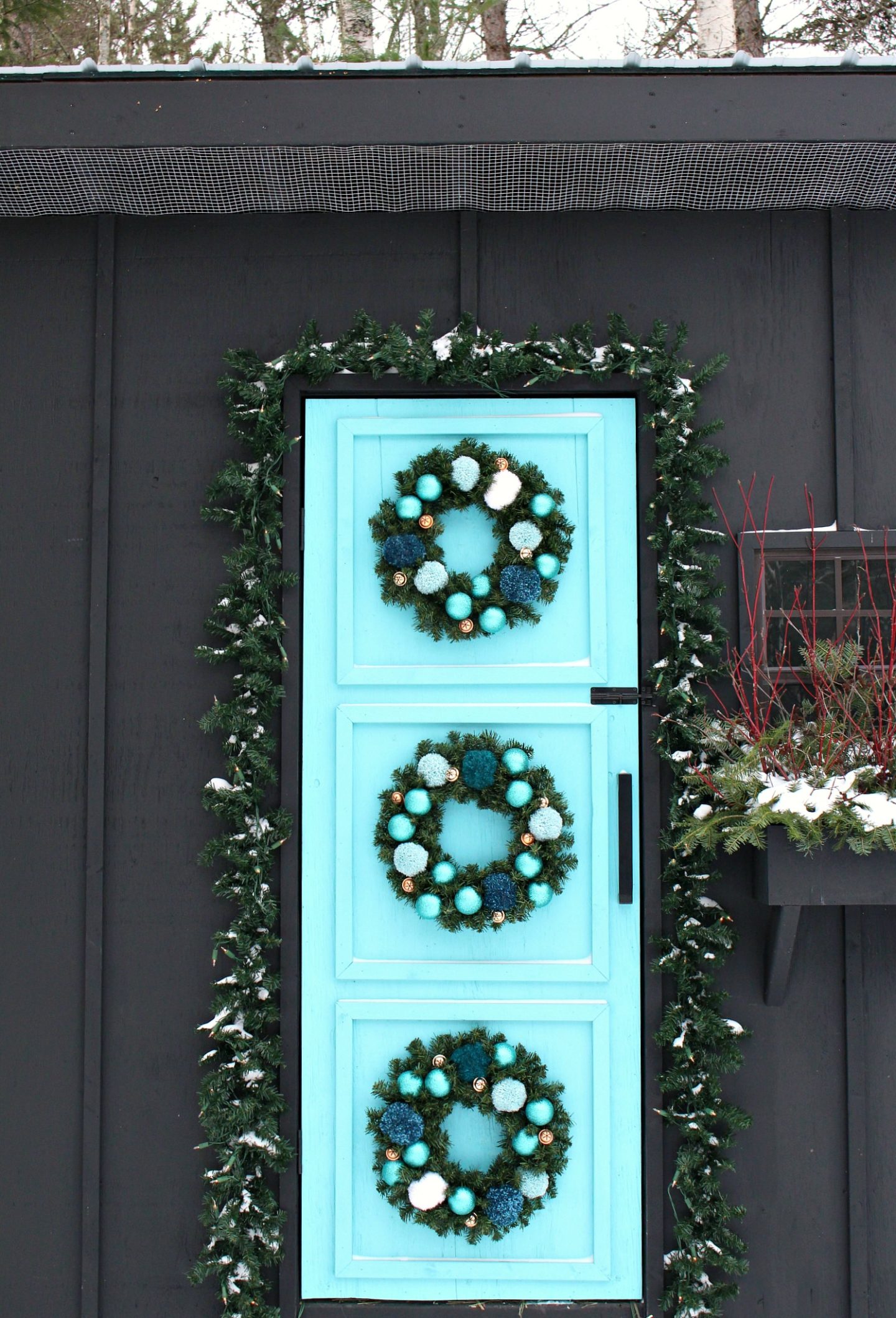 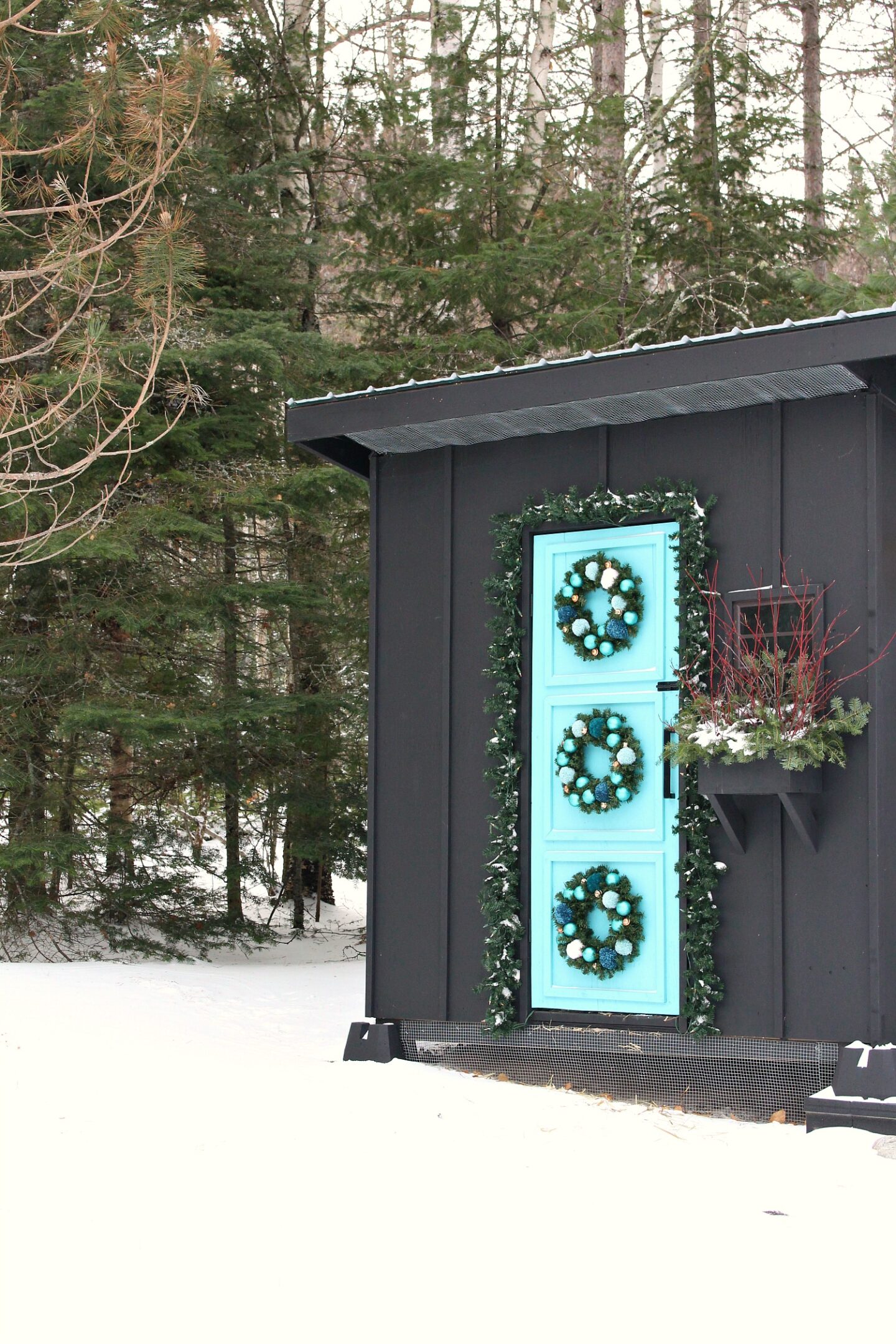 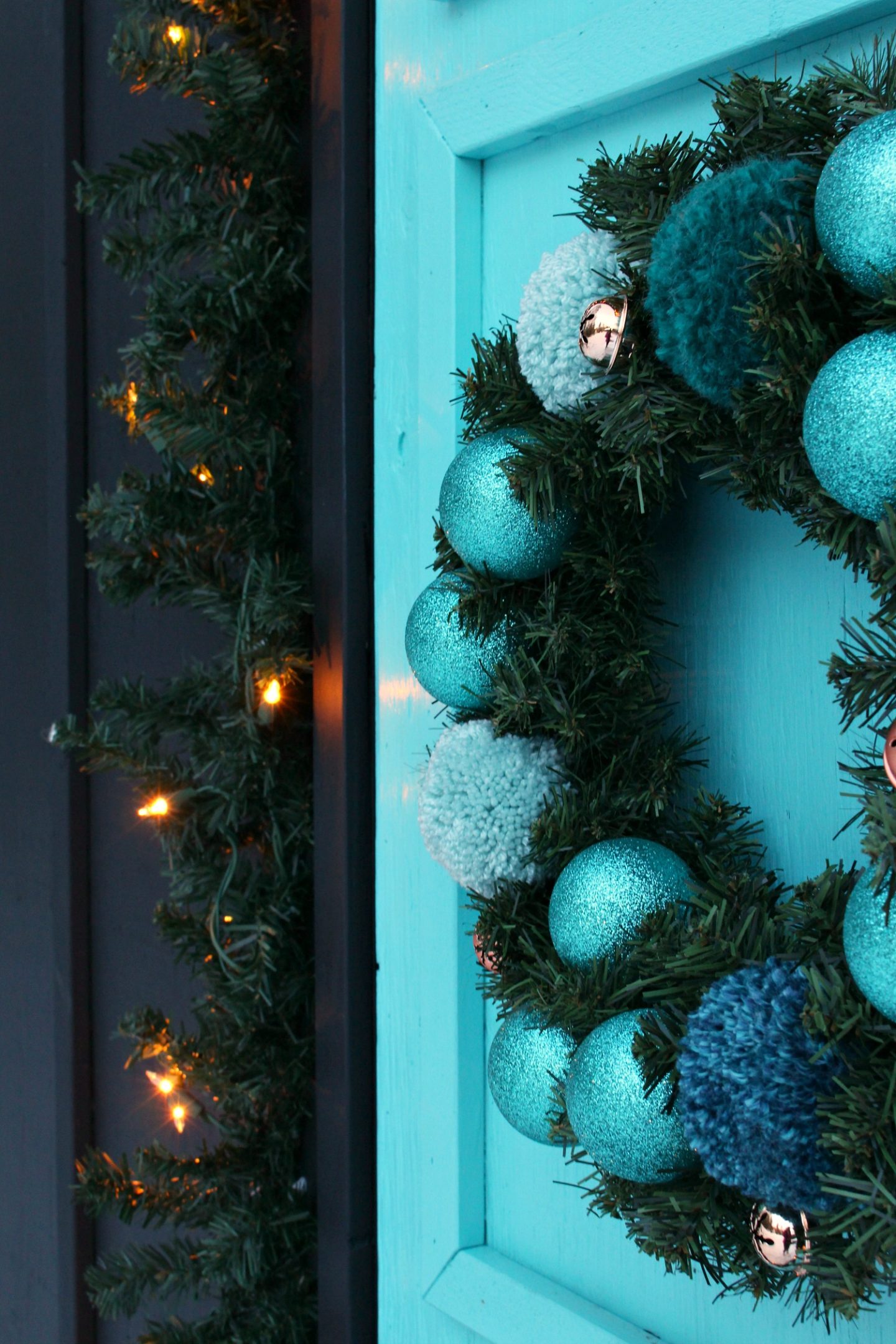 I’m actually hoping for more snow (What?! Me hoping for snow, lol?) to hide the predator proof hardware cloth and the cement base.  I didn’t have a chance to permanently hide either of those before the snow fell – I was still torn between planting shrubs/bushes or maybe building a little deck or planter box.  I’m glad snow will bury it soon!  But I think the focus is on those cute wreaths anyway (I just love making wreaths)!  They’re put together with faux evergreen wreaths ($5 each at Michael’s), DIY pom poms (made with thrifted yarn), sparkly ornaments (from Dollarama) and little copper bells (also Dollarama).  They’re super budget-friendly, plus they were really fast and easy to make. 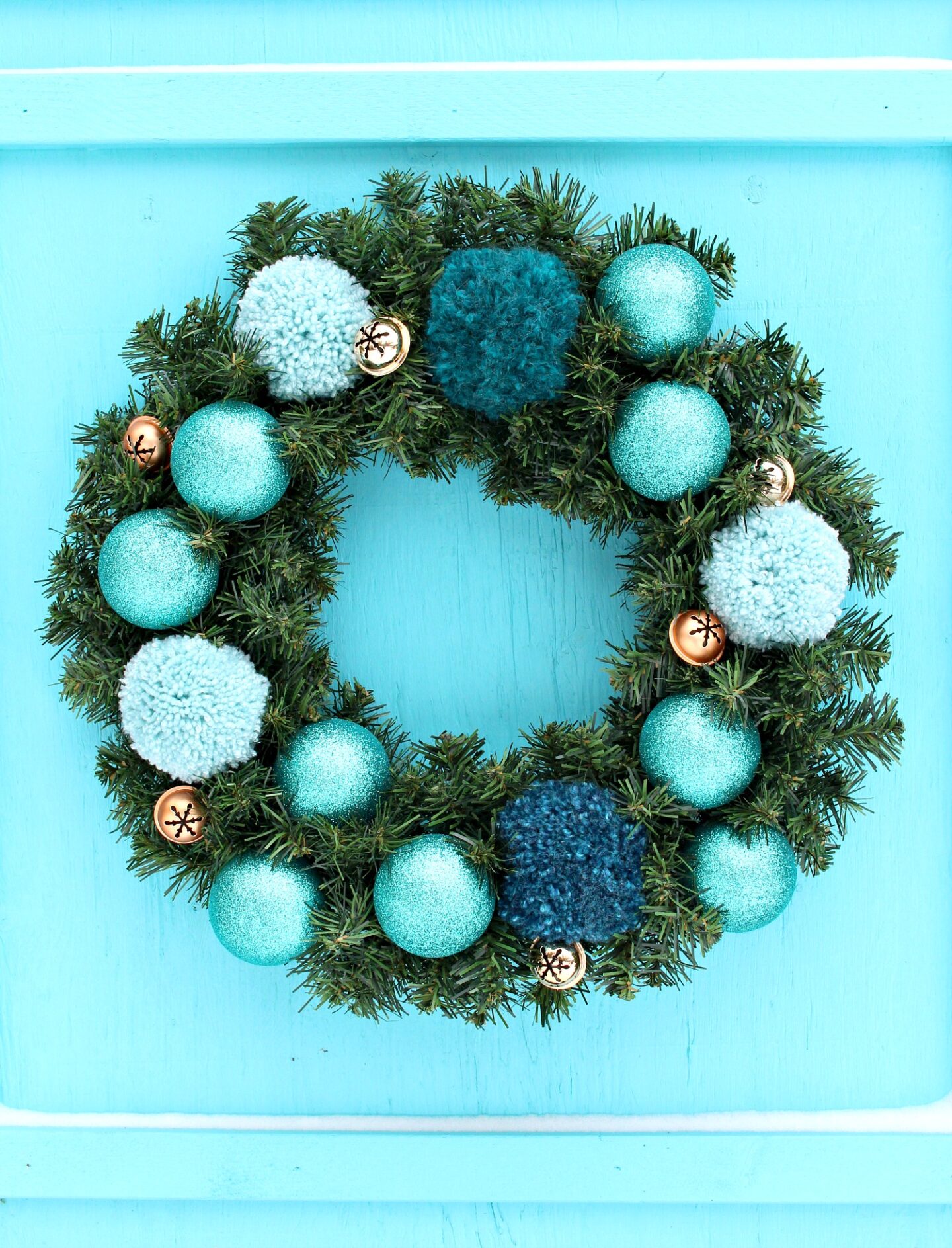 I’ve always wanted to hang three wreaths on a door in a row – and the chicken coop door was the perfect contender! 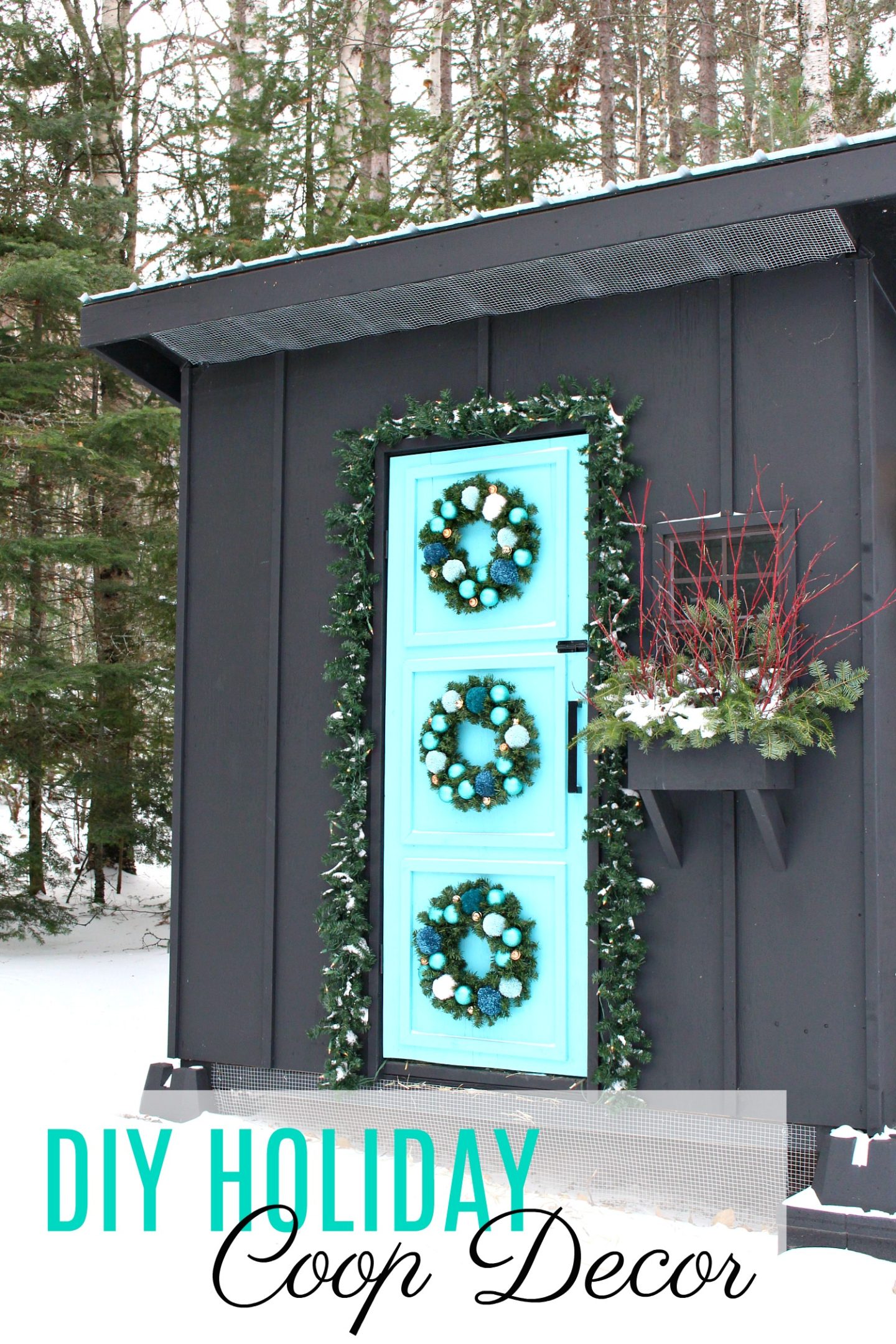 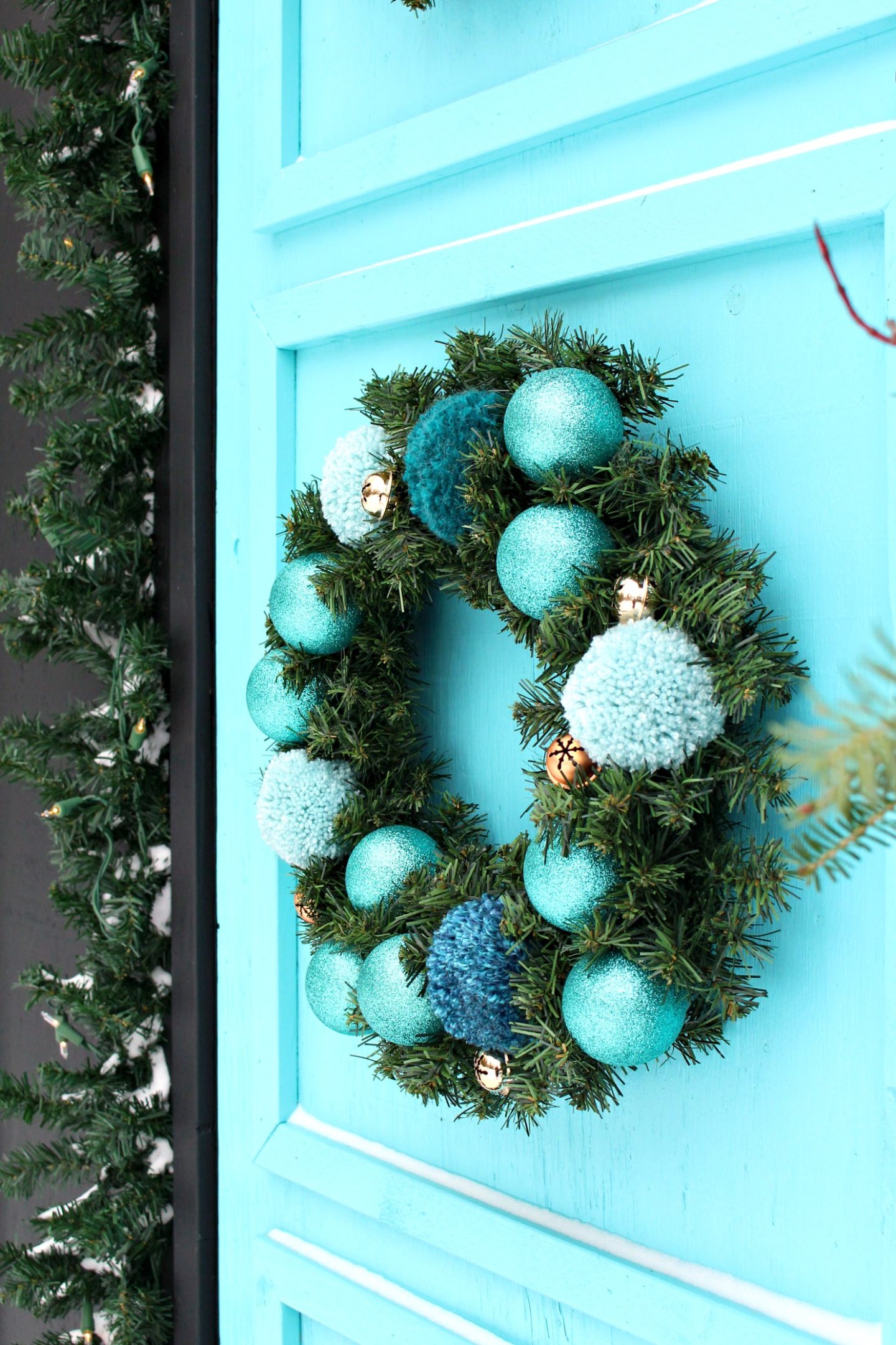 Making these DIY pom pom wreaths was super easy!  Here’s what you need. 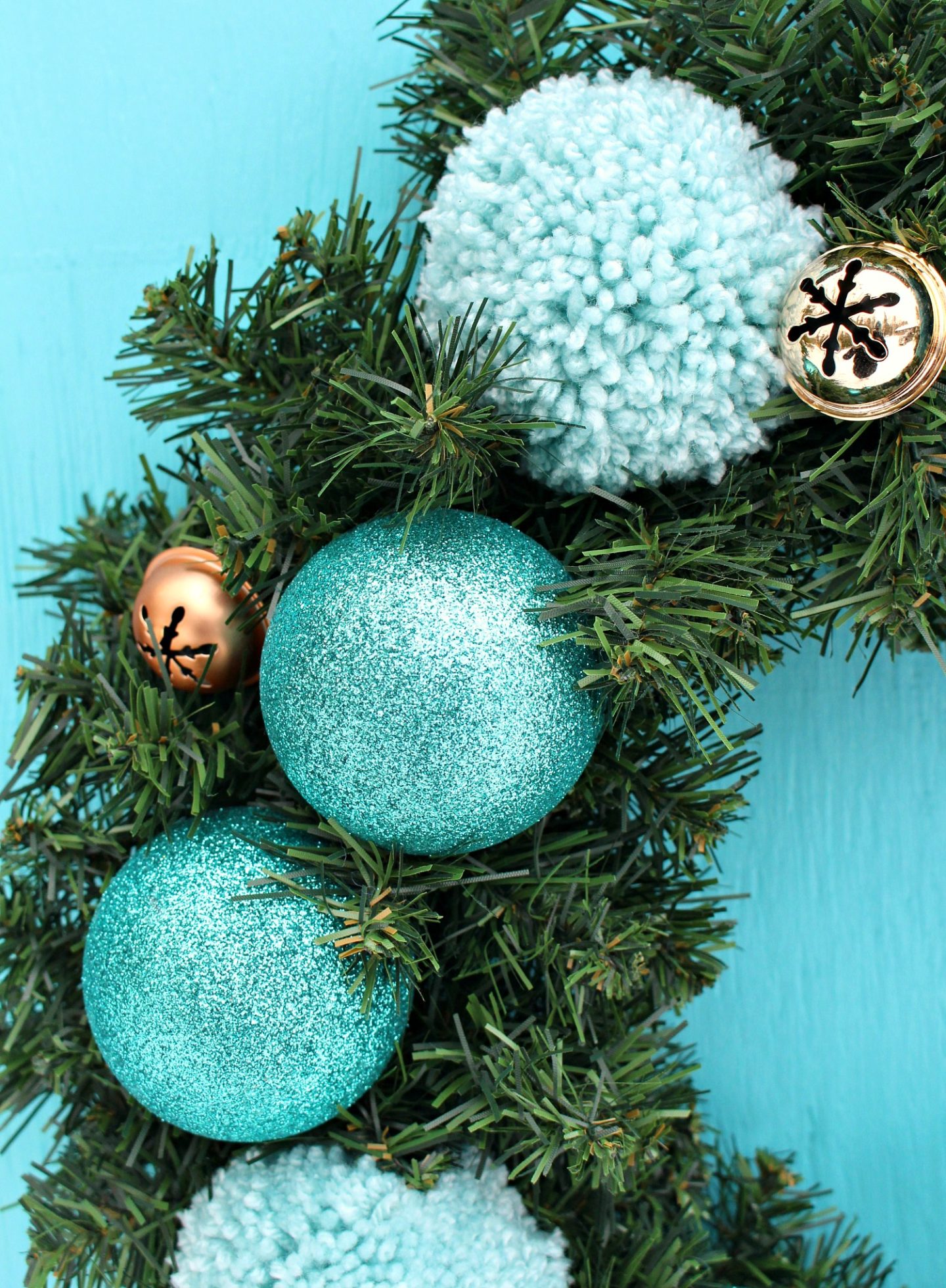 I originally planned an all-pom pom wreath but then I found the evergreen wreaths on sale for only $5.  So I planned an all-pom pom and evergreen wreath, but as I played with the placement I decided that it looked more interesting and festive if I added some glittery ornaments and some coppery bells.  I also wasn’t sure if a 100% yarn wreath would end up a soggy mess outside (so far, the yarn looks perfect, so that might have been an unfounded worry). 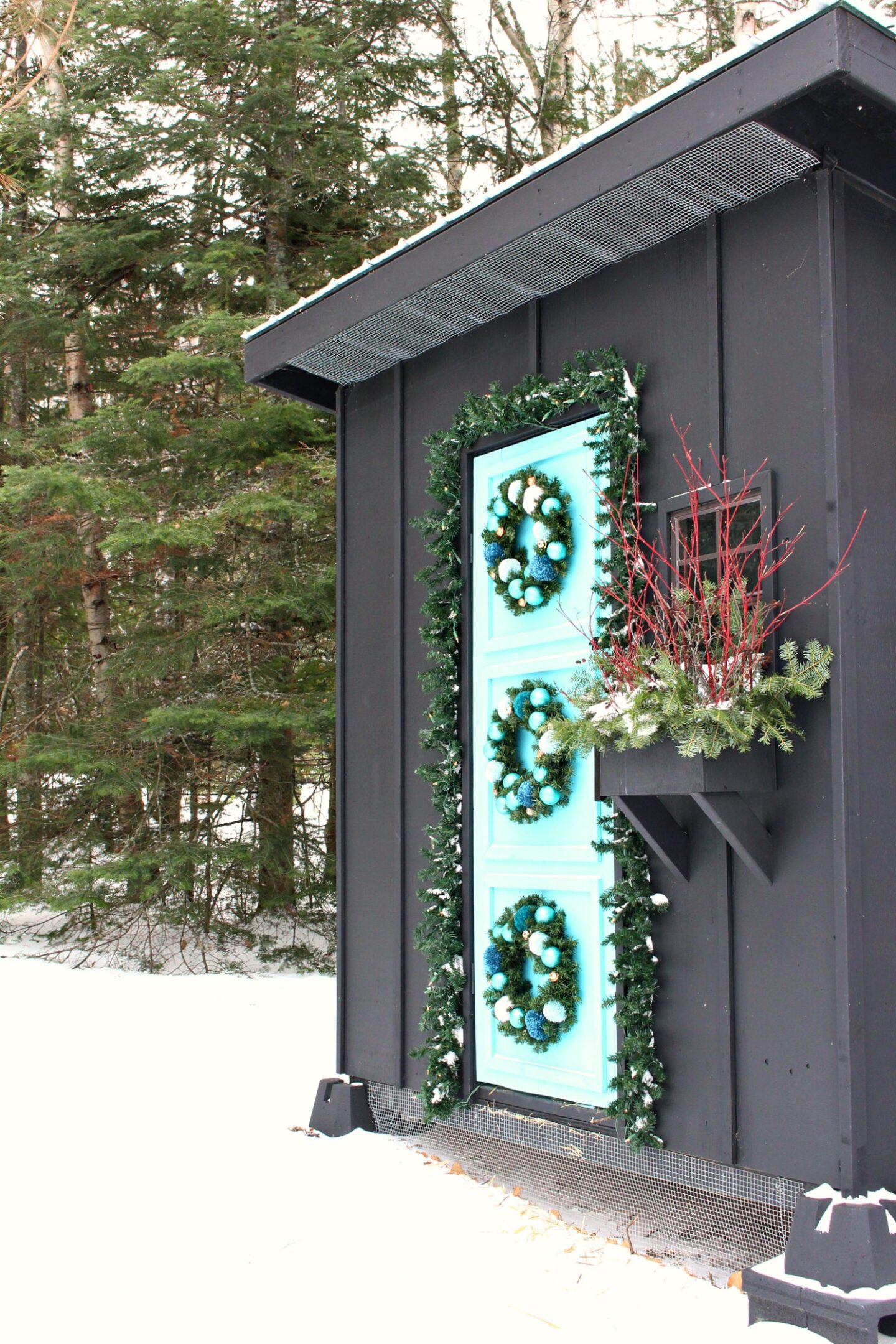 How to Make a Pom Pom Wreath

First I made an assortment of pom poms using my tutorial.  I made them in my signatures teals and aqua – but I also secretly made some red, which I jettisoned at the last minute (I just don’t like red, but I tried, lol).  It’s super easy – and kind of relaxing! – to make DIY pom poms, so making an all-pom pom wreath wouldn’t be difficult.  Just one tip after you read my pom pom tutorial: for the final step, winding some yarn/string around the pom pom maker (see photo below), I used a super tough cotton yarn for this set of pom poms, so they would hold up outside.  That final step is what holds all of the yarn together, so you want to use something that won’t tear or break:

When I had made a variety of pom poms in my color palette, I roughly mapped out my placement and and then tied everything – the pom poms, the ornaments, and the bells – on to my evergreen wreath with the same cotton yarn.  That’s it!  Then I just screwed in a cup hook to hang it on the door (3M makes removable ones). 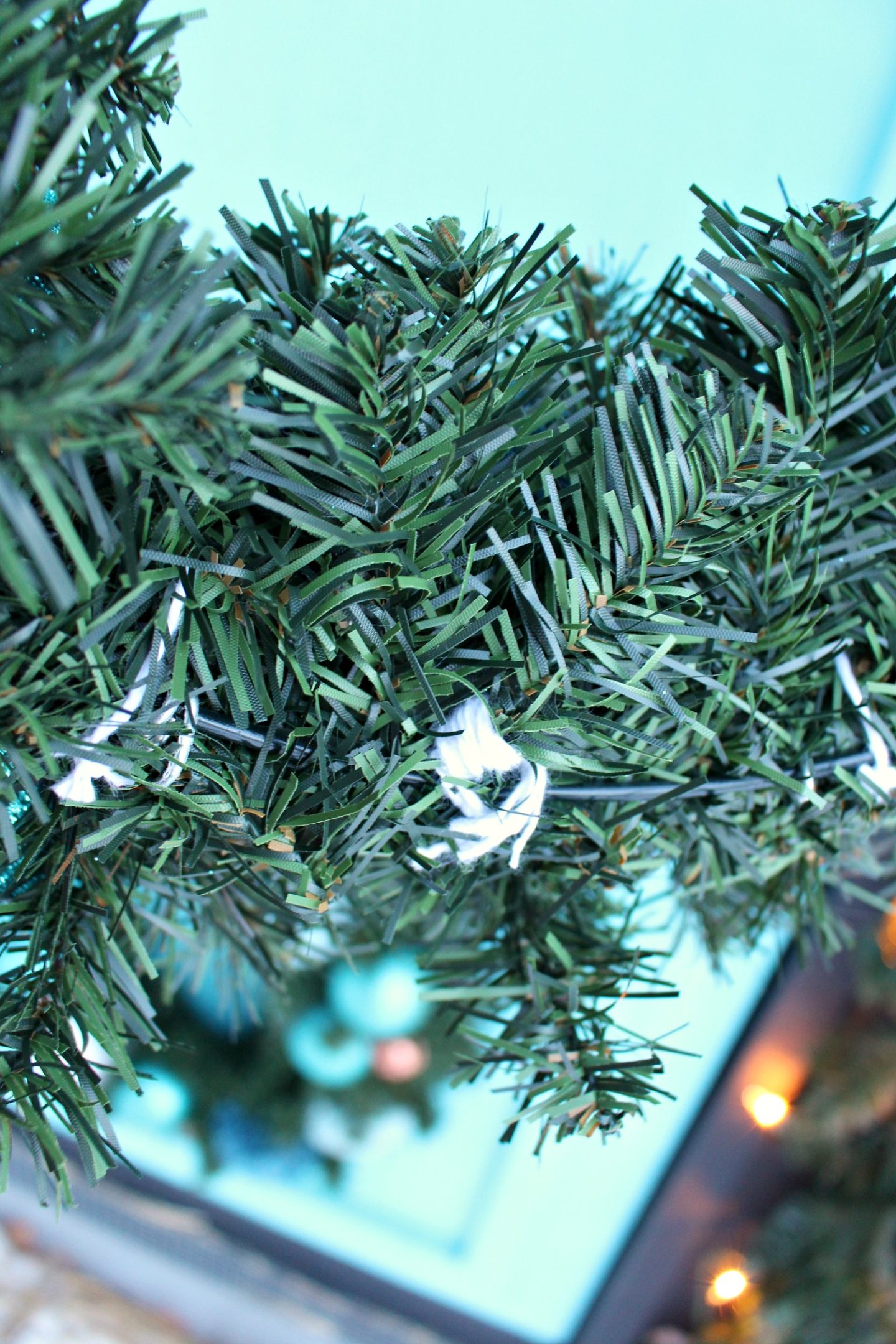 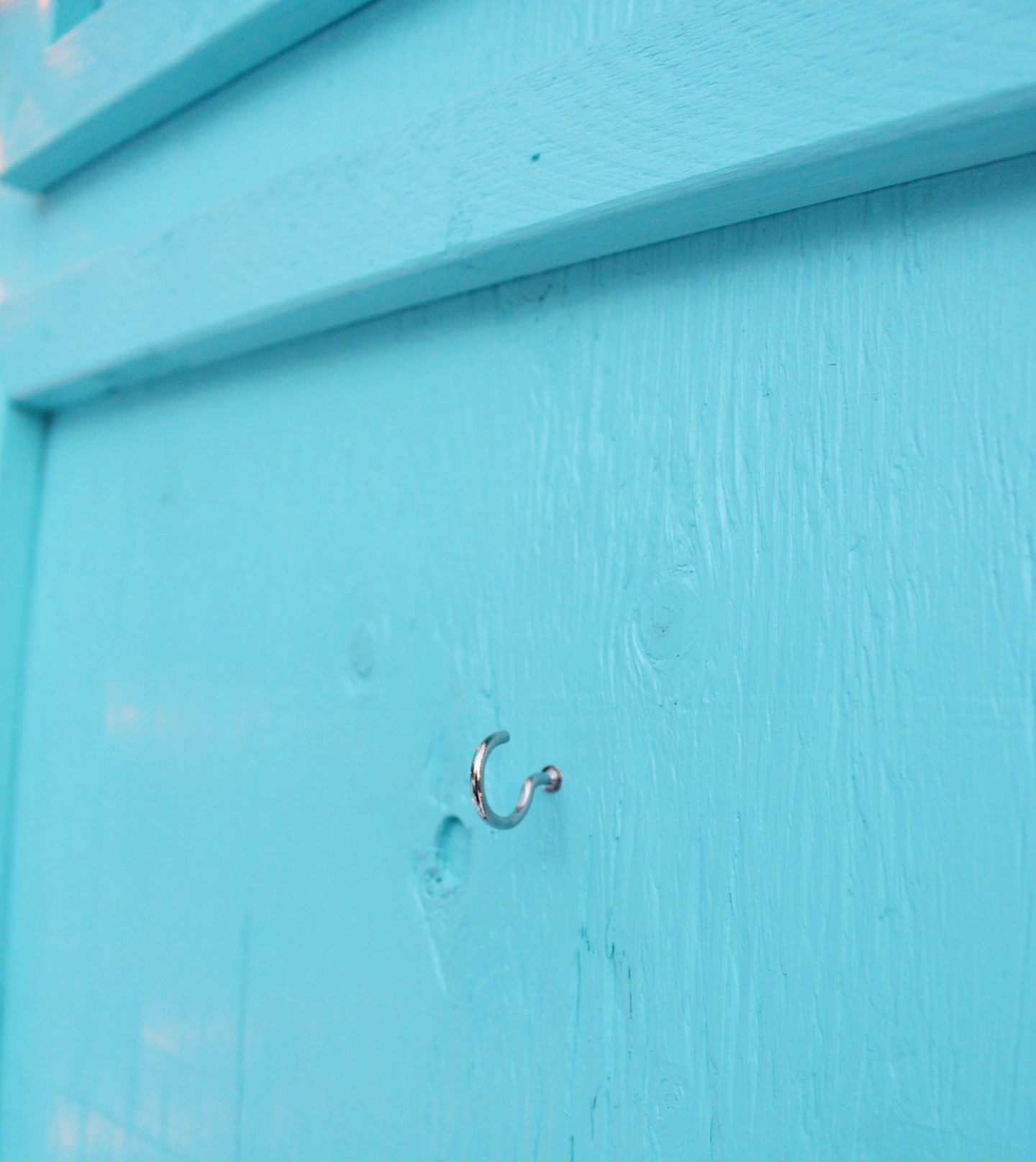 This DIY pom pom wreath project was so easy and I love how it turned out.   But you could skip the other ornaments and just do pom poms – if that sounds appealing, just wrap a foam wreath in yarn (like this) and then tie on only pom poms, for a really full and woolly pom pom wreath. 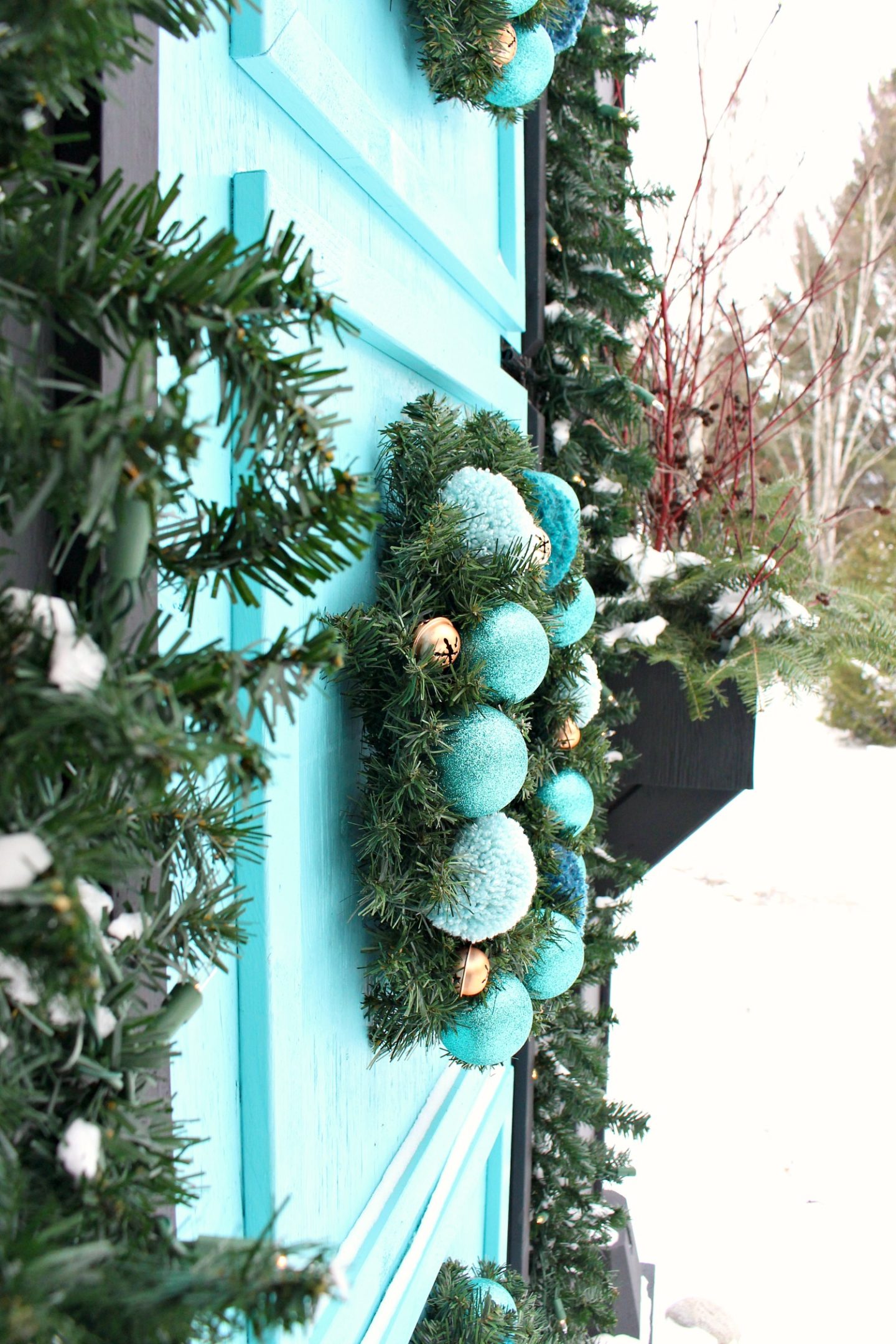 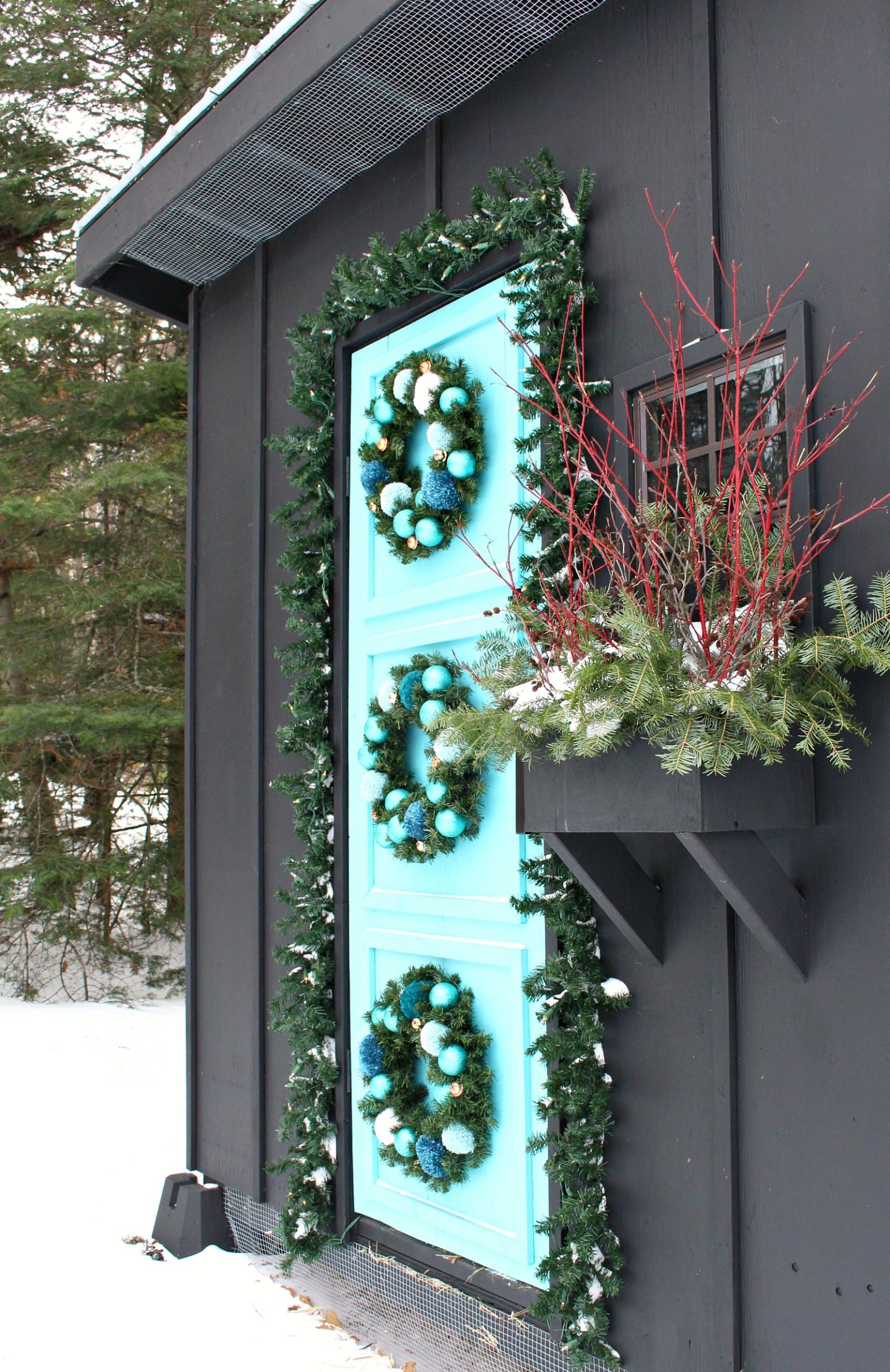 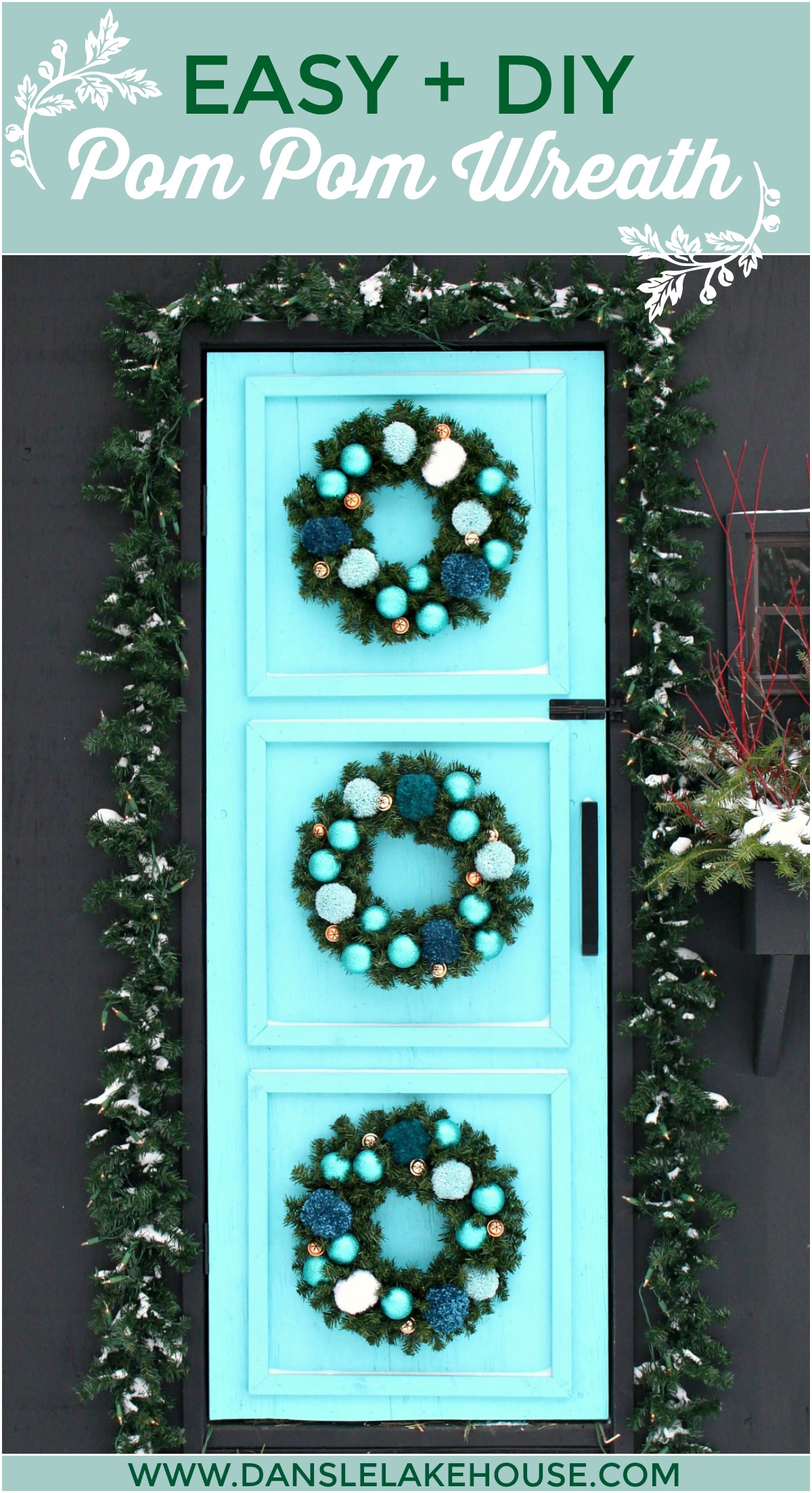 The glittery ornaments pick up the sunlight in the day, and reflect the twinkle from the lighted garland at night.  And I love the soft jingle of the bells – plus they’re copper so they match the roof.  (My new obsession with copper knows no bounds). 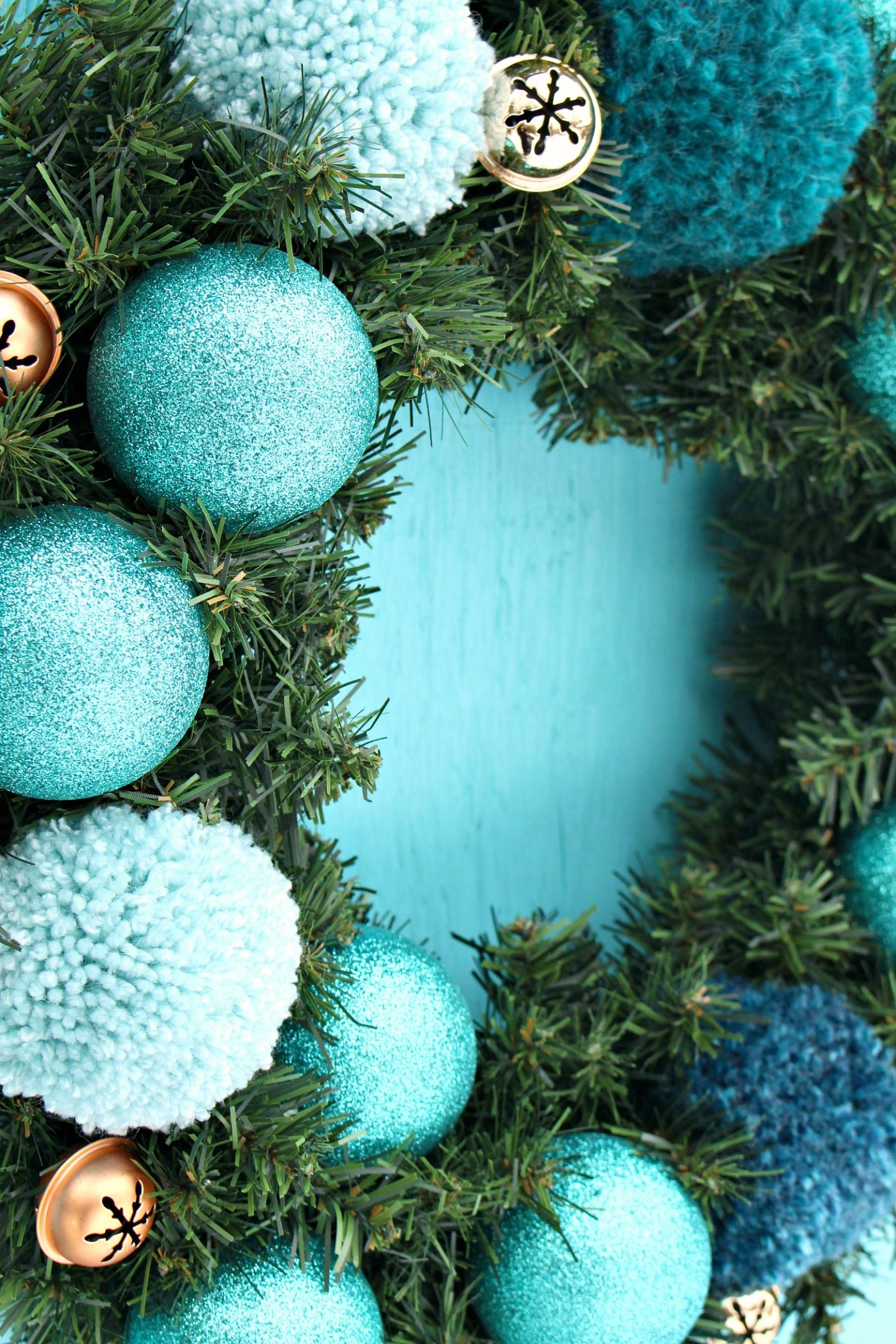 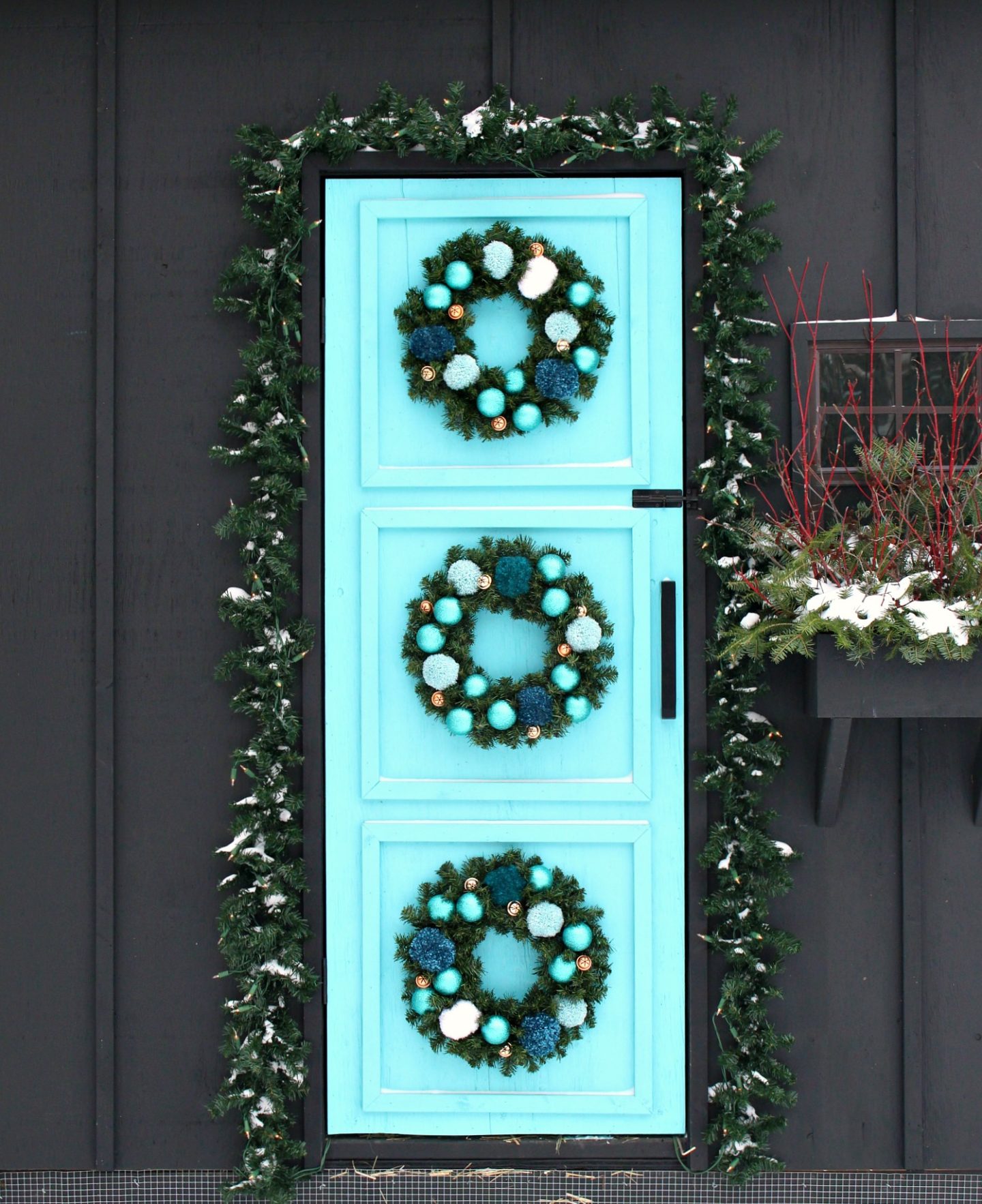 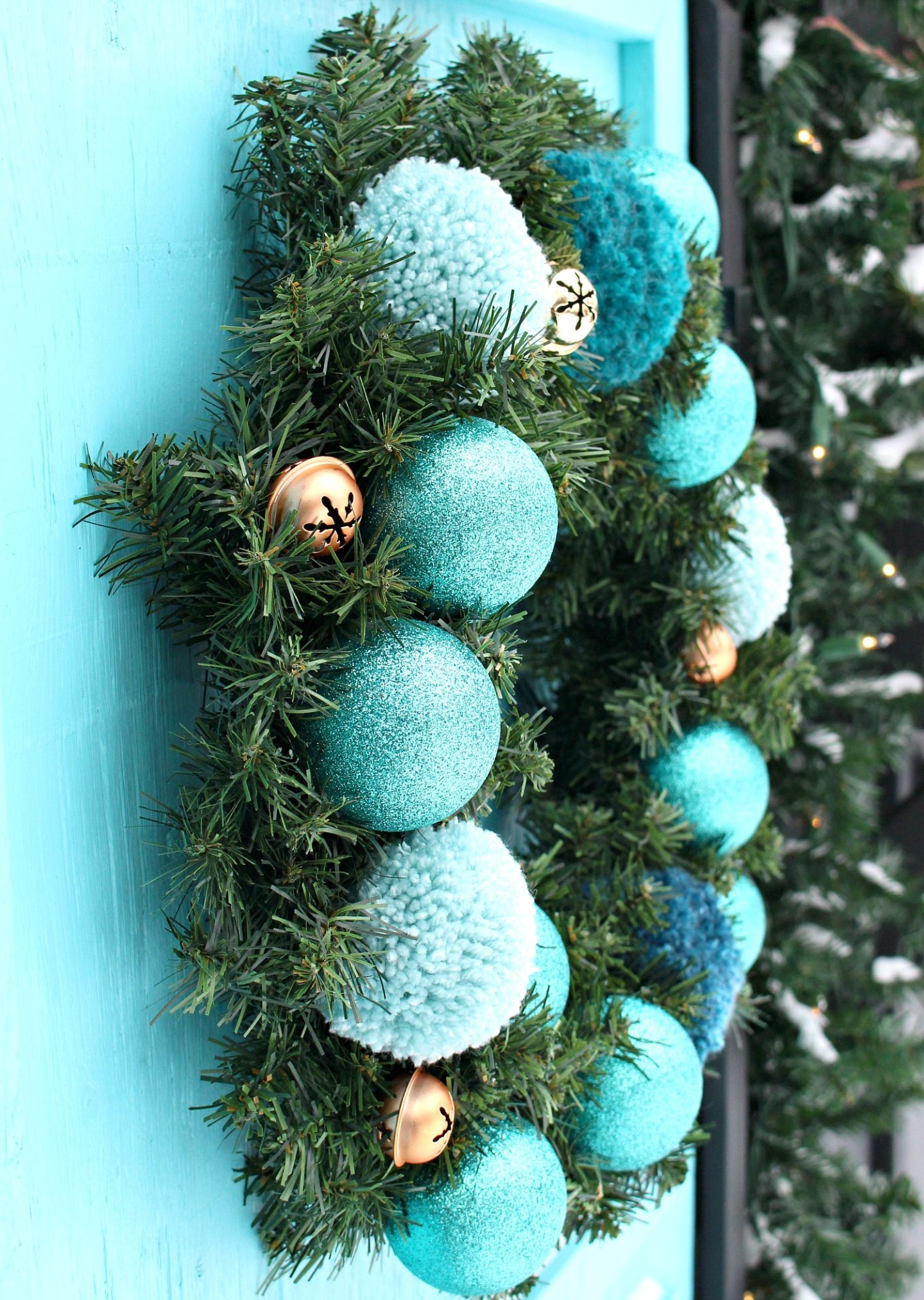 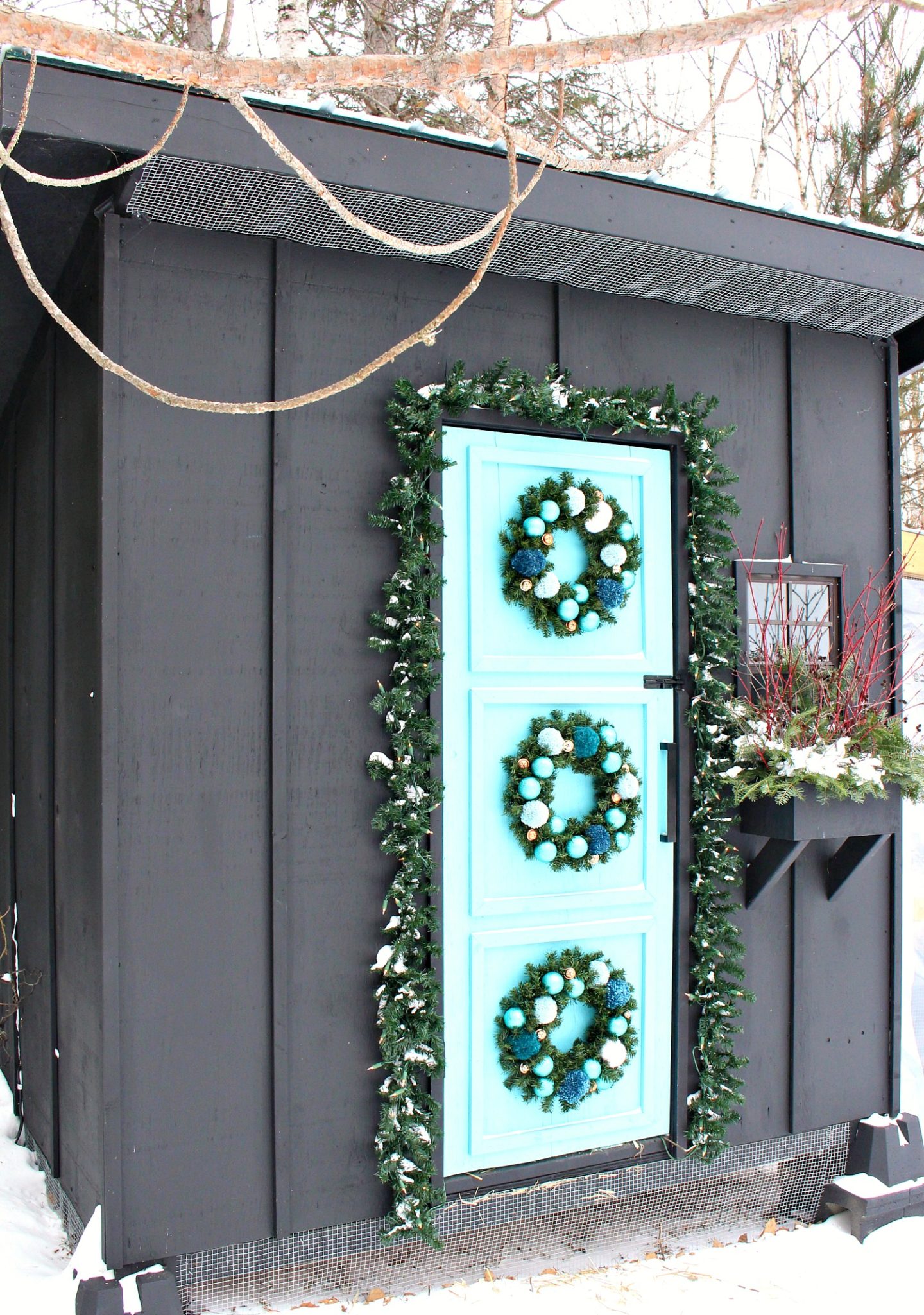 It’s difficult to photograph, but the chicken coop looks so cozy and inviting at night now. 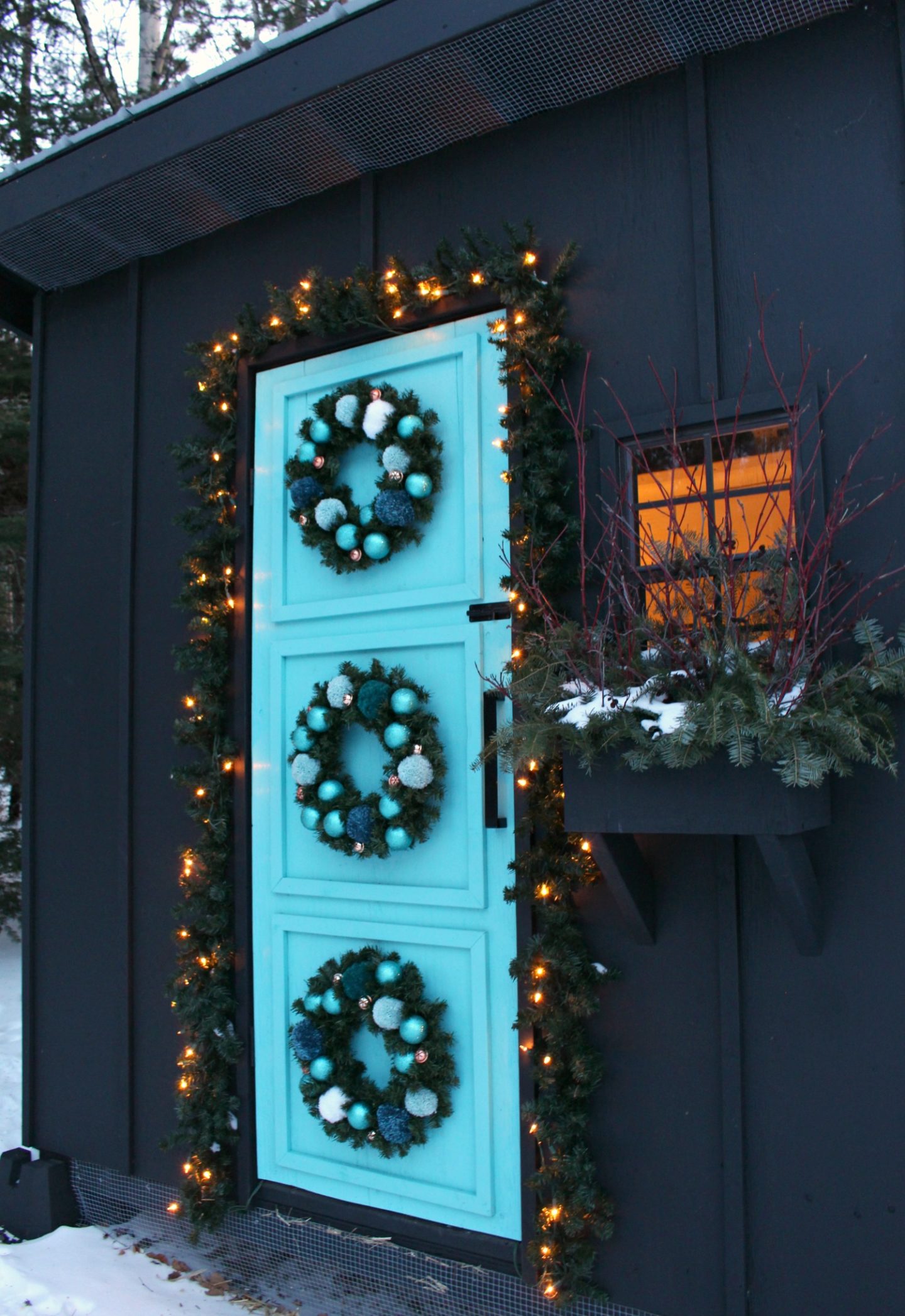 P.S. Looking for more DIY wreath ideas? Click here to see them all!