I have some sad news from the backyard chicken flock: Jet, my sweet Ayam Cemani hen, died suddenly and unexpectedly. 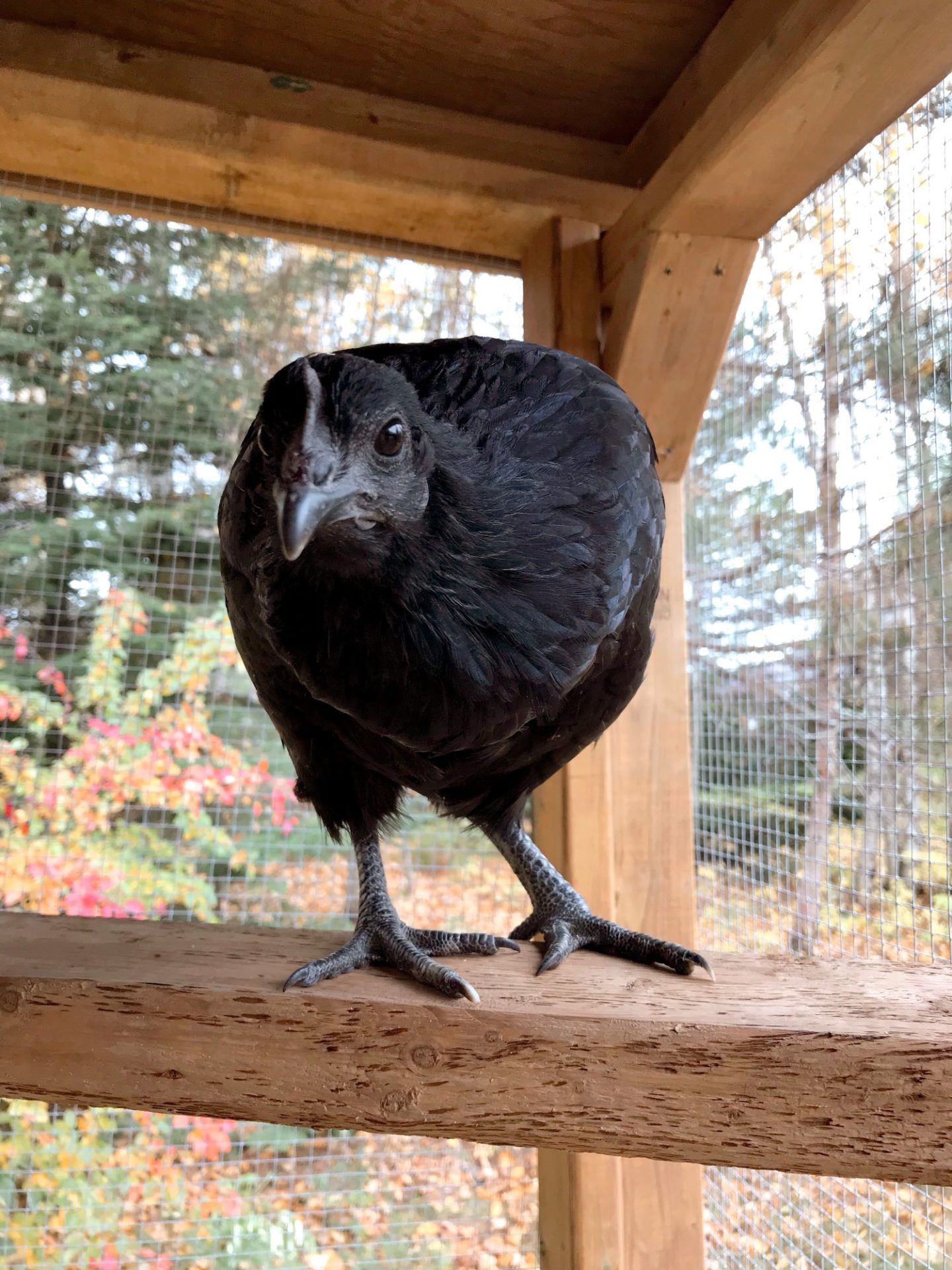 Keeping backyard chickens has already tugged at my heart strings.  I wasn’t emotionally prepared for having to cull a chick, give away my beautiful roosters, or re-home an ailing hen.  I grew so unexpectedly attached to these chickens.  I have since stopped eating chicken meat (which was my honest to goodness favorite thing to eat), and now I’m almost 100% vegetarian.  I never realized chickens are such complex little creatures, with distinct personalities and quirks, and now I see the world differently because of my chickens.

Jet joined the flock when I bought four pullets this fall.  So many of my chicks had turned out to be roosters and I was worried that my smaller-than-intended flock wouldn’t fare well in the winter.  Chickens are little heaters and they can keep each other warm, but you need enough of them in a coop or run.  So I ordered four pullets from a hatchery and one of them was a beautiful and rare Ayam Cemani, an Indonesian breed of chicken.  These are typically very expensive chickens, with all black skin, feathers, flesh and organs.  Some hatcheries sell the chicks for $99 a chick (or up!) and they’re straight run, so you could pay big bucks for a bachelor flock (all roosters, lol).  I can’t afford that, but I found a hatchery with a few Ayam Cemani pullets left, so I was thrilled for a chance to add this rare and unusual chicken breed to our flock (for a slightly less eye watering price). 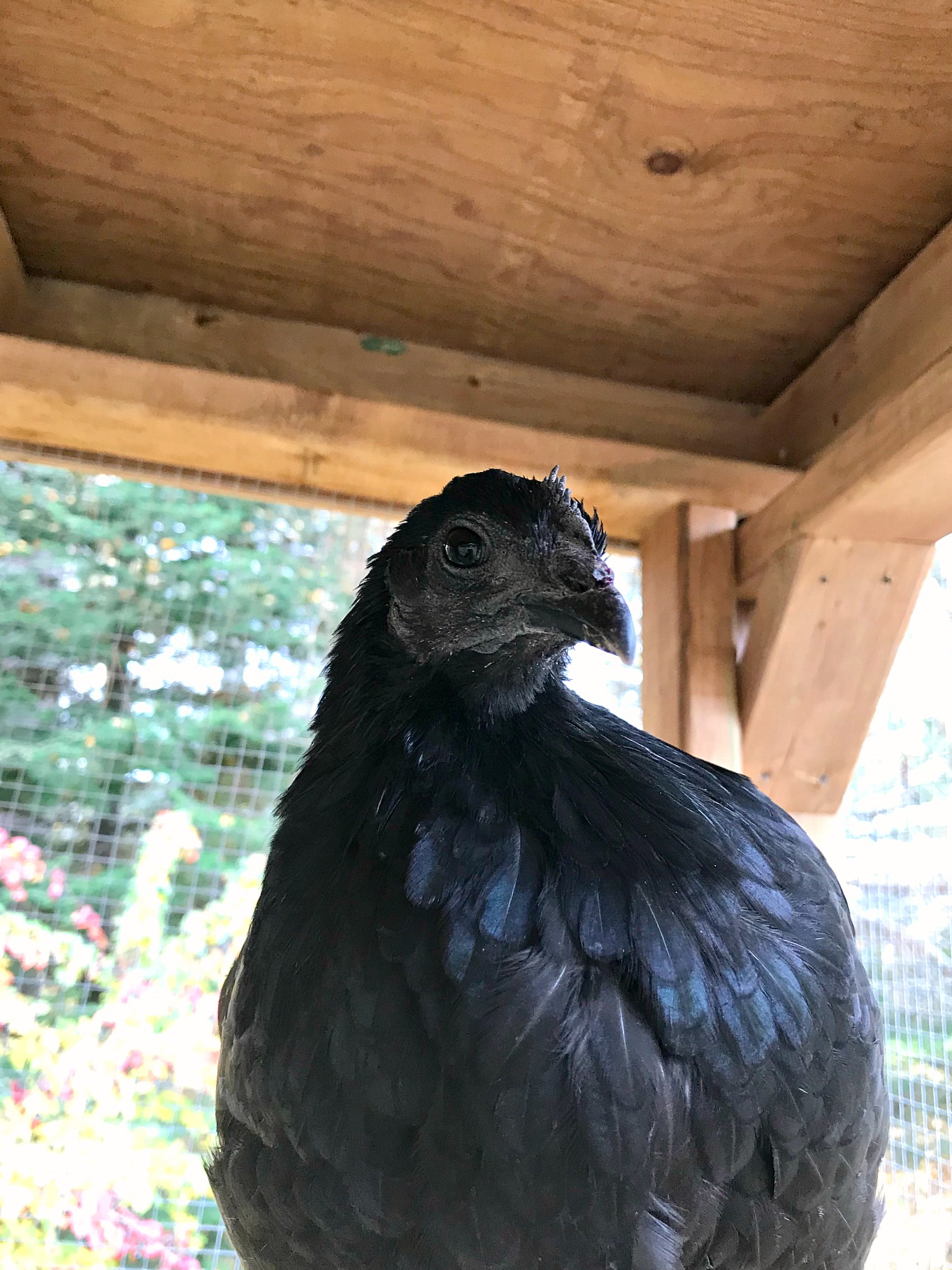 Jet was immediately very protective of the other three hens, but never aggressive with us.  She was just shy and scared.  Honestly, none of them seemed to have been handled much.  She escaped twice while the hens were living in their temporary quarantine coop.  One time we chased her around the garage, another time she flew up into a tree (that’s when we learned she can fly).  We eventually cornered her under the deck and gently caught her with a fishing net.  Chickens can’t really fly (they can flutter around a bit, mostly to break their falls when they hop off a roost), but Jet was an exception.  When we eventually tried to join the newbies with our flock, Jet escaped the pecking by flying up to a ledge above the man door.  The other chickens were hilariously stunned, like “how the heck did she do that”?.  I brought her treats while she hid there.  She nervously pecked me until I gently stroked her neck.  That’s when she closed her eyes and her whole body relaxed.  After that, she loved to be gently pet this way and she slowly warmed up to me.  She ended up fairly low in the pecking order of the combined flock and my Ameraucana hens often prevented her from getting treats, so I taught Jet a trick.  If she hopped up on a straw bale near my chair, I’d sneak her some treats while I distracted the others by tossing some treats on the ground.

She was a quick study. 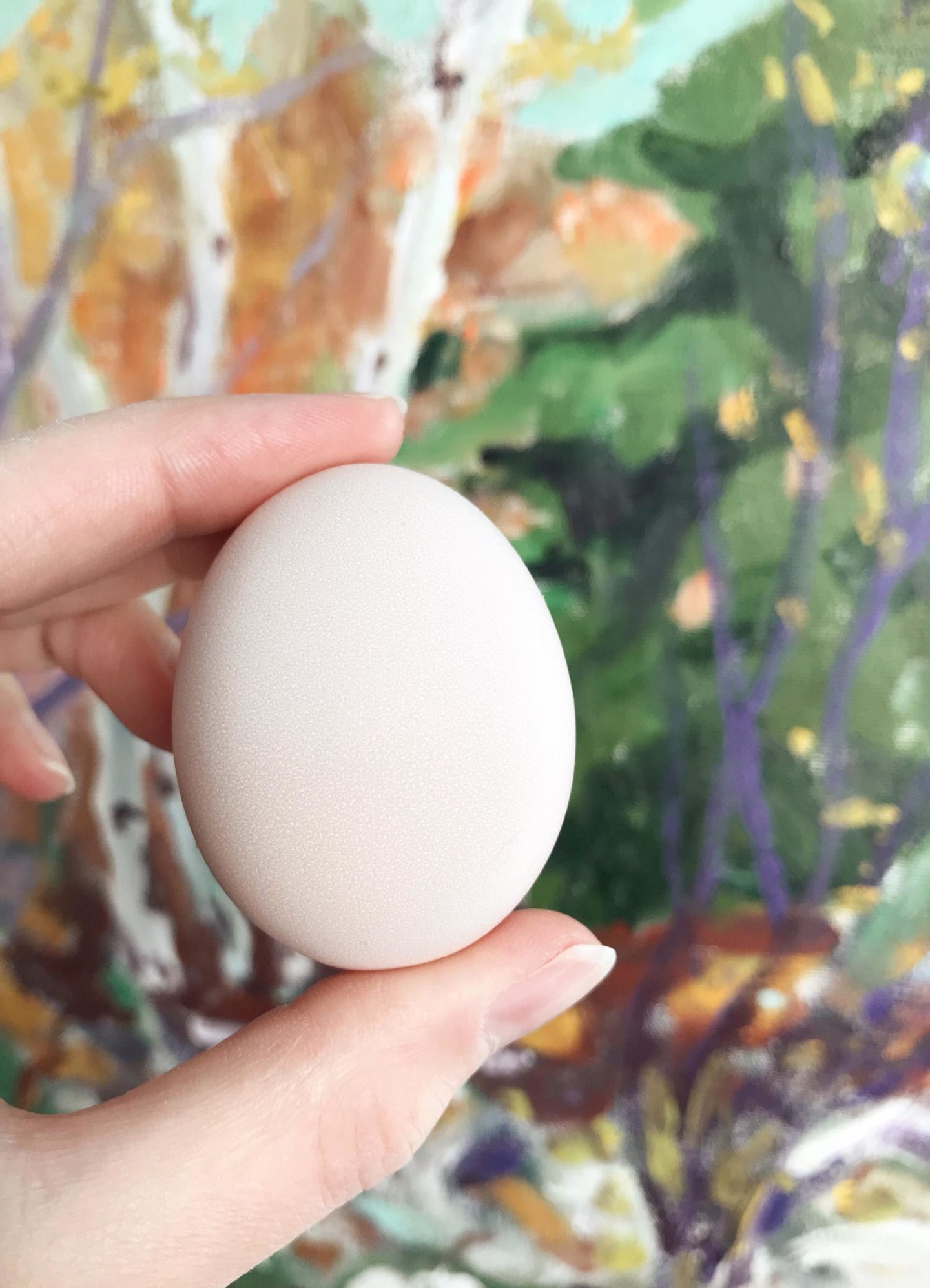 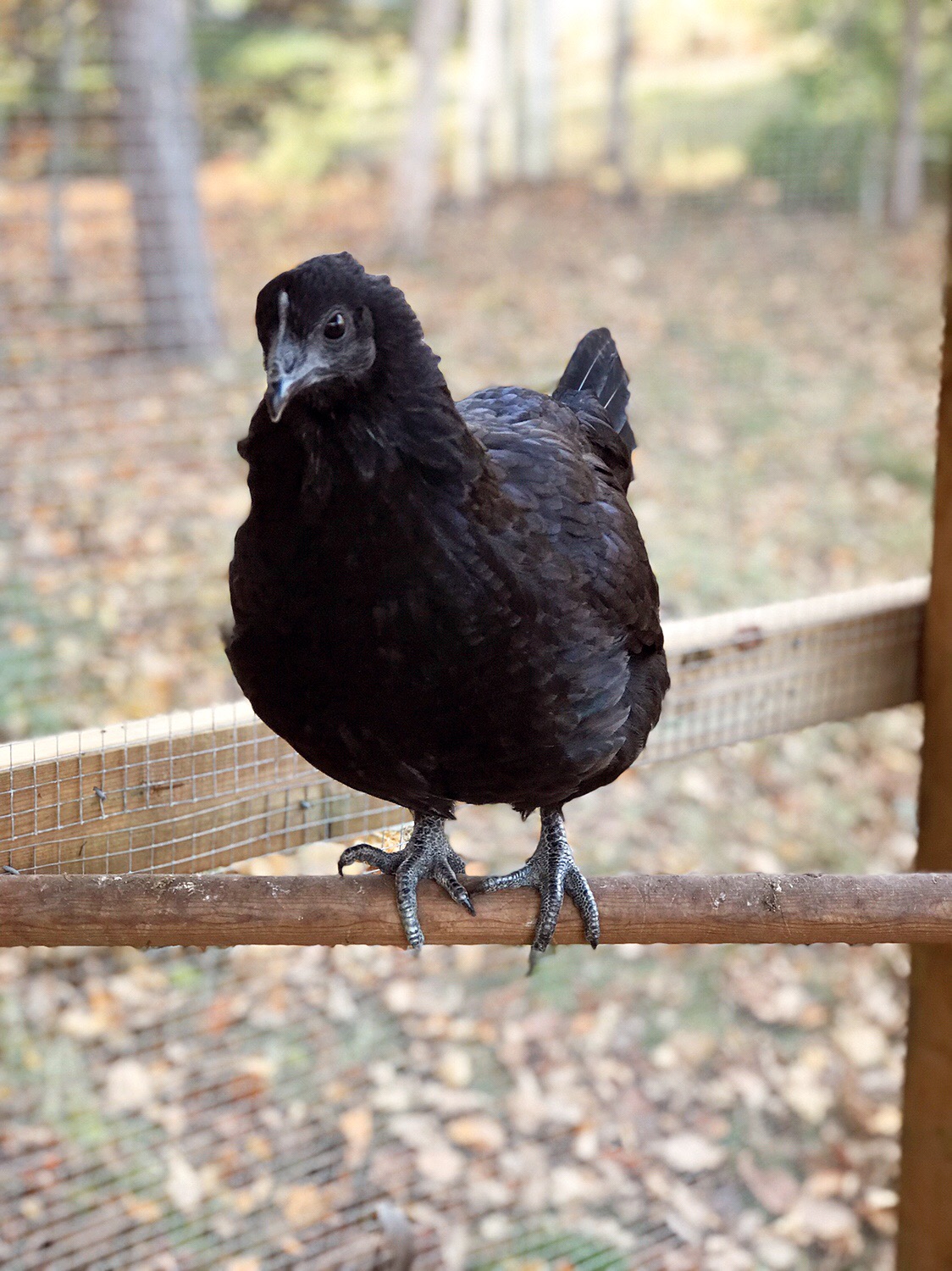 I don’t know why she died.  I try to read up on common chicken ailments so I can spot problems early on and I visit with them twice a day for a little inspection.  When the weather isn’t arctic cold, I sit out in the run for awhile and feed them treats so I can sneakily inspect them in more detail.  Just a few days prior to her death, Hubby and I had spent a good chunk of time out there because the weather was so nice so we raked out the coop and run, and replaced the straw and pine shavings.  I’m happy we took the time to snap this photo, because I didn’t have many of her: 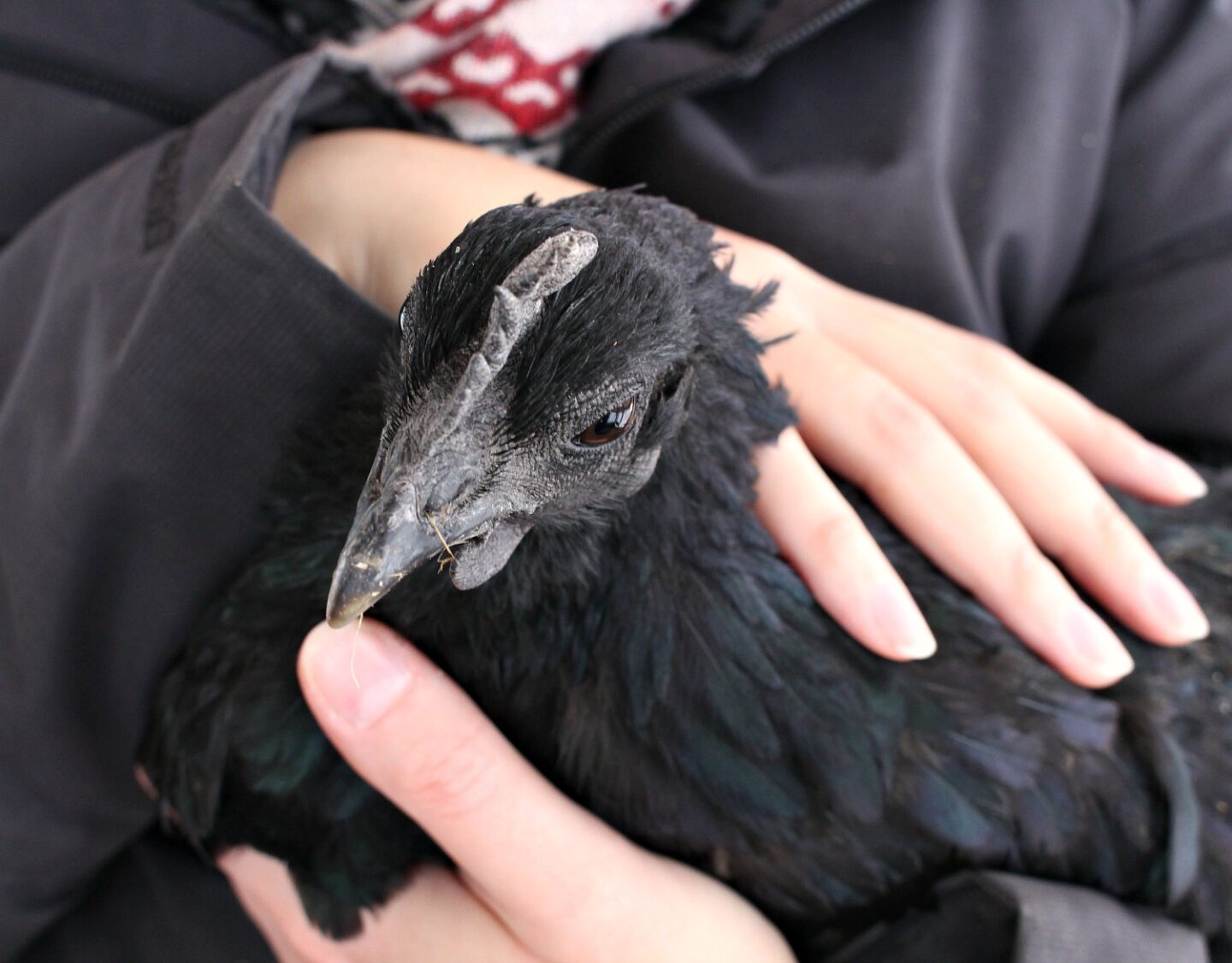 I thought we’d have more time together.  The Ayam Cemani breed is striking, with sleek features and a petite build – plus the feathers are gorgeous with a vibrant purple and teal sheen.  I wish I had more (better) pictures.

She was her usual self the last times I saw her: sweet and curious – and sprinting around like normal.

The morning of her death, Hubby checked for eggs and the chickens were all fine.   It was a crisp day, but not like some of the extremely cold winter days we’ve been having.  There was nothing unusual or worrisome and we were headed out the door to run an errand.  I was putting my coat on when Hubby came rushing in and blurted out that a chicken was dead.  It was noon.  Jet was now lying, stiff, on her side on the ground.  I couldn’t believe she had died, so Hubby brought her inside because I was in denial and convinced she just needed to be warmed up.  She had definitely passed, so I stroked her neck one last time and cried.  I know it might seem silly, but I love my chickens.  The dogs were very curious about her, and Hubby showed them.  I was so worried they would do something gross.  But they smelled her and then looked to me, worried and agitated.  I think they recognized her as one of our own.

I didn’t want to look at her like that, but I needed to know why she died.  Frustratingly, I didn’t see an signs of an attack or any disease symptoms.  I don’t know why she died or what I could have done to prevent her death.  There was a tiny sign of pecking on her comb.  I wonder if, after she collapsed, the others tried to wake her by gently pecking her.  That kind of breaks my heart.  I have read that chickens do “miss” their flock mates.  I experienced something like this when I re-homed the roosters. 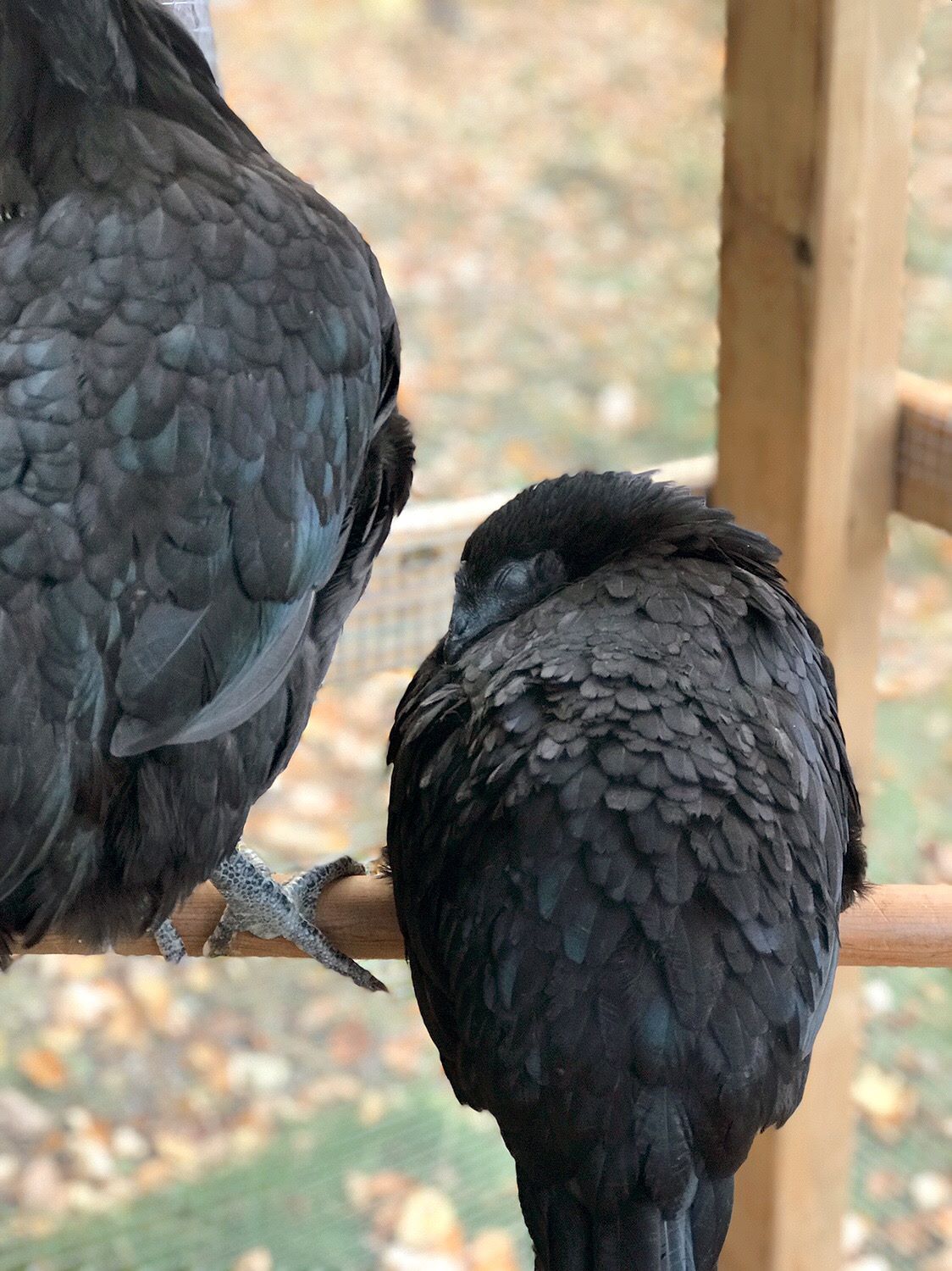 Pewter (my big rooster) had an interesting reaction the next day.  When Hubby had retrieved Jet’s body from the run, he was wearing tan and black work gloves (like these).  We each have a pair we keep in the truck for emergencies and grubby work.  The next day, when I went to feed the chickens I grabbed my identical pair work gloves and Pewter went NUTS.  He attacked the gloves and started to flap his wings and bump his chest.  He was really, really distressed and wouldn’t get close to my hands, even though they were offering up a tasty plate of oatmeal.  The next day I changed to plain black mittens and he was fine: calm, friendly, curious – and a piglet for snacks.  I think he associated the gloves with the disappearance of a hen.

The general mood in the coop has been mellow since Jet died.  There’s a subtle difference: the remaining flock is really eager to see me these days.  They always are curious when I arrive (snaaaaacks!) but now they run quickly to me and don’t leave my side when I’m in the run.  I can barely step in because they crowd around the door so anxiously.  With one exception: Dolly (short for Dolomite), Jet’s BFF, has always been shy and now she seems a little more reserved, like she’s a little lost without her friend.  She only has one other hen from that mini flock now (a confident Austrolorp that has fit right in), but luckily my sweet Silkies keep Dolly warm at night.  For some reason Dolly and the Silkies don’t like to roost at night, so they snuggle in a heap together.  Chickens are social creatures so the fact that my Silkies snuggle her makes me hopeful that she has some companionship in the flock, which has a hierarchy eerily similar to high school. 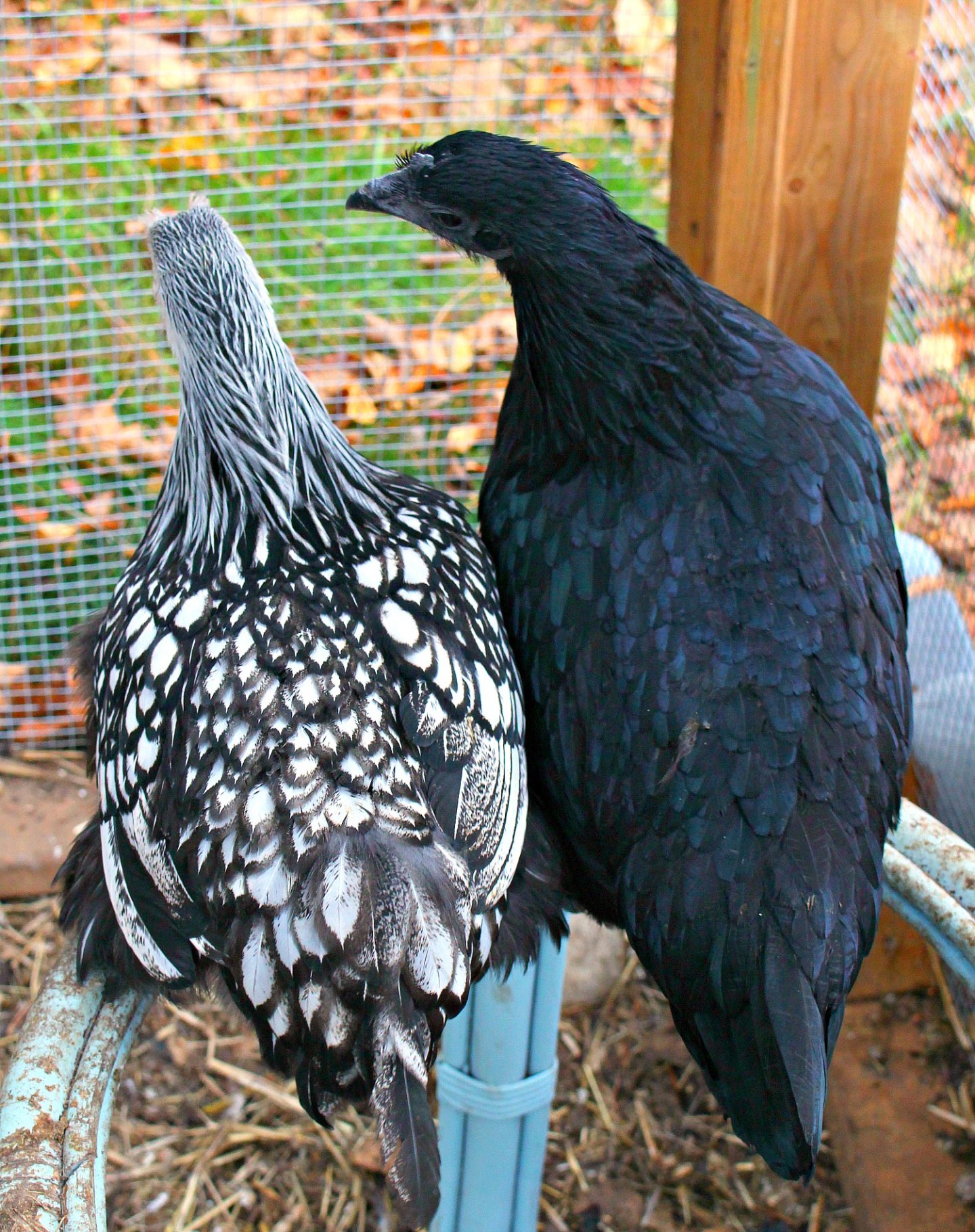 Sorry about the poop. Chickens = so much poop.