I mentioned in the fall that I had found a new home for Pewter, my favorite rooster.  But then I never confirmed whether or not I had actually brought him to his new home, so I’ve received a ton of questions asking about Pewter’s fate.  Here’s the story. 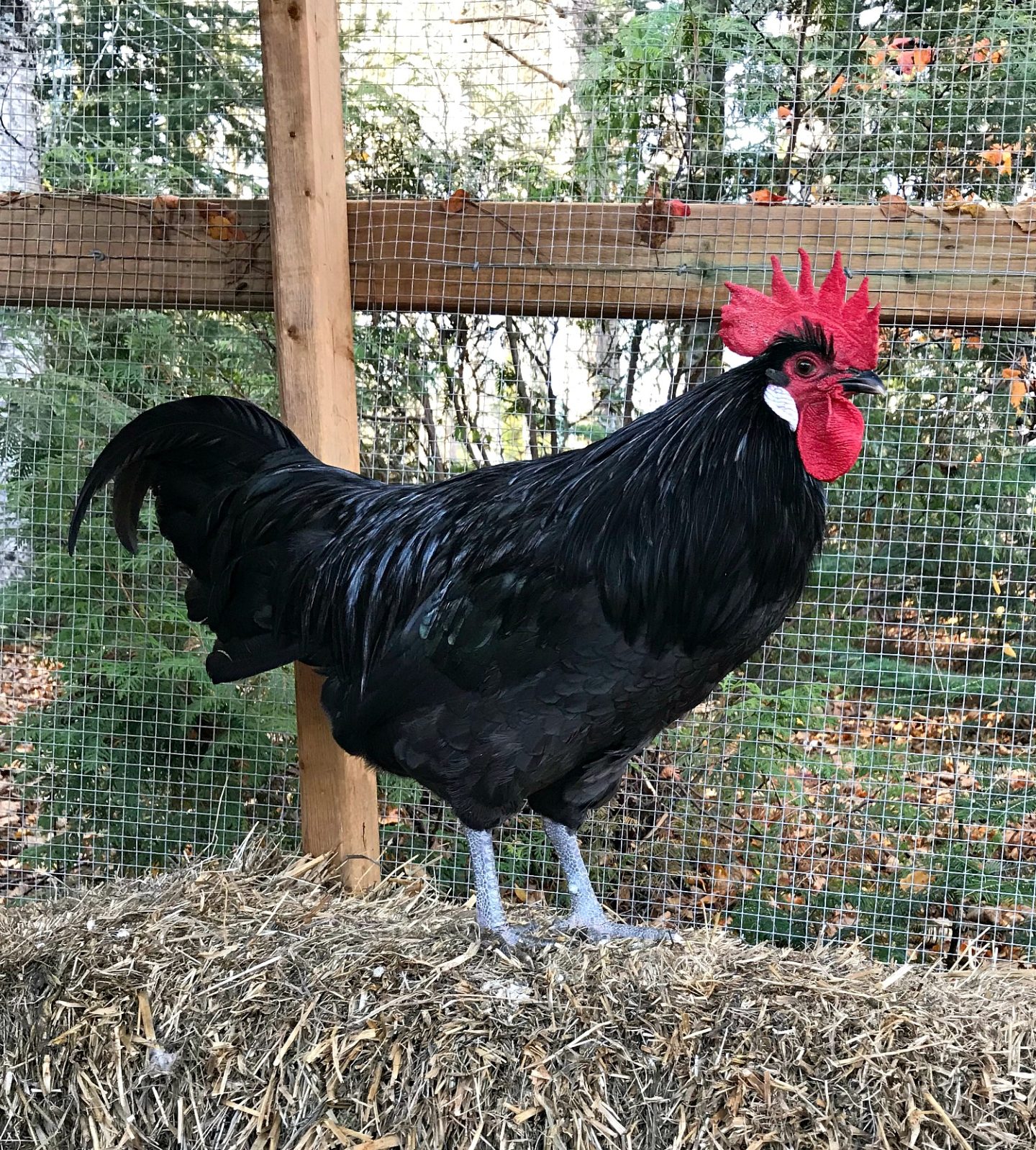 The Home I Found for Pewter

When I found a good home for Beryl, my poor hen with respiratory problems, the woman who adopted her gave me a tour of her coop and we started talking about chickens.  She was free ranging hers and had lost 20 or so (from a flock of 30) to a coyote.  She said she had solved the coyote problem, but now her flock was small and unprotected because she had lost her best rooster.  This caught my attention because I had been considering re-homing Pewter.  I never intended to keep roosters (and gave all of my Ameraucana roos away) but I was too attached to Pewter.  Since the de-roostering, Hubby had been encouraging me to consider re-homing Pewter as well, because he is loud and loves to crow (Pewter, not Hubby, lol).  When Pewter first started to mate with my, otherwise completely silent and adorable hens, they would scream bloody murder and the screeching was a bit much.  I was worried neighbors would complain, and I also worried that because I have so few hens, his mating needs would rough them up.  I described Pewter and his many wonderful qualities.  The woman was very interested in giving him a home, so we made a plan for me to deliver him in a week.  I think she would have been happy to take him that day, but I wanted time to say goodbye.

Why I Couldn’t Let Go…

Hubby was happy I had found a home, but I was so sad that week.  Pewter had been my favorite since they were little chickies, because he wasn’t afraid of me and would reach out to me when I appeared at the edge of the brooder.  Also, to be perfectly honest, it was easy to spot him in the group – it turned out later, that’s because he was a completely different breed, sent to me by mistake. 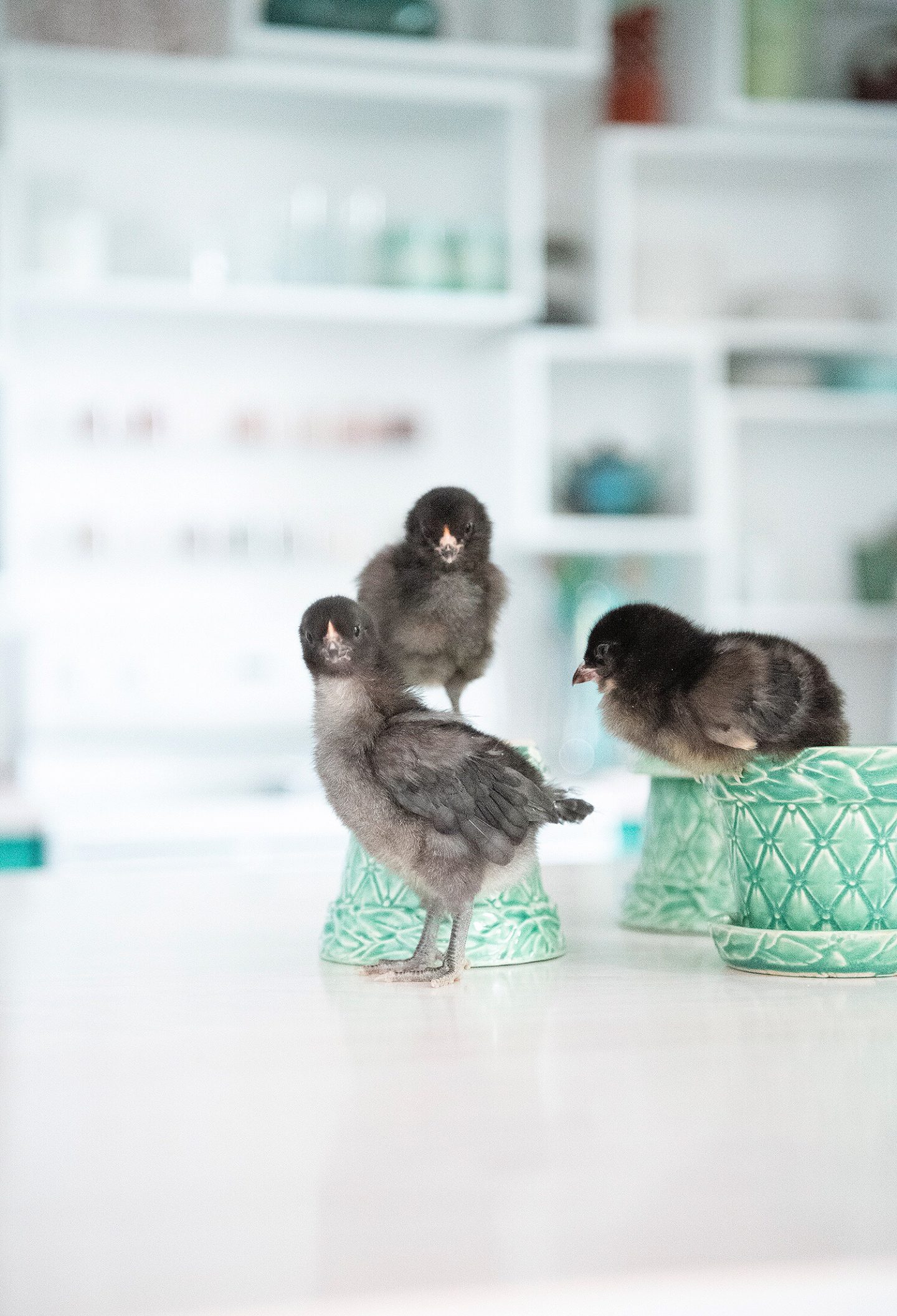 He was always curious and encouraged the others not to be afraid.  In the early days, he was very, very snuggly.  He would settle on my shoulder and would even sleep there.   He loved to be held and cuddled. 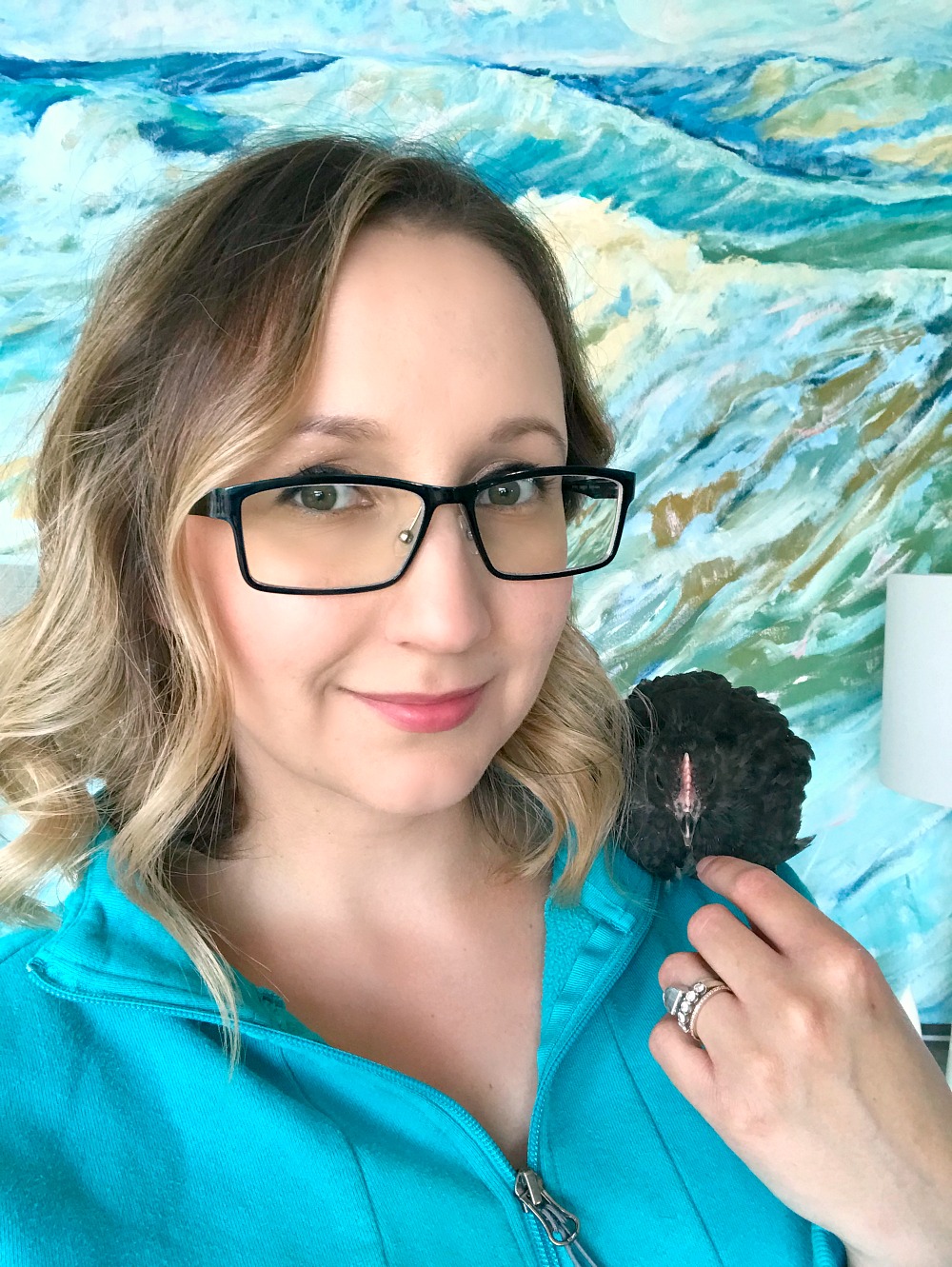 As he grew up, he remained a special rooster because he was uncharacteristically gentle.   While the other roosters grew and became more aggressive, Pewter stayed really chill – even though he was the biggest.   Before he started mating, he still really loved to be snuggled and hop up on my shoulder – even when he got way too big for that! 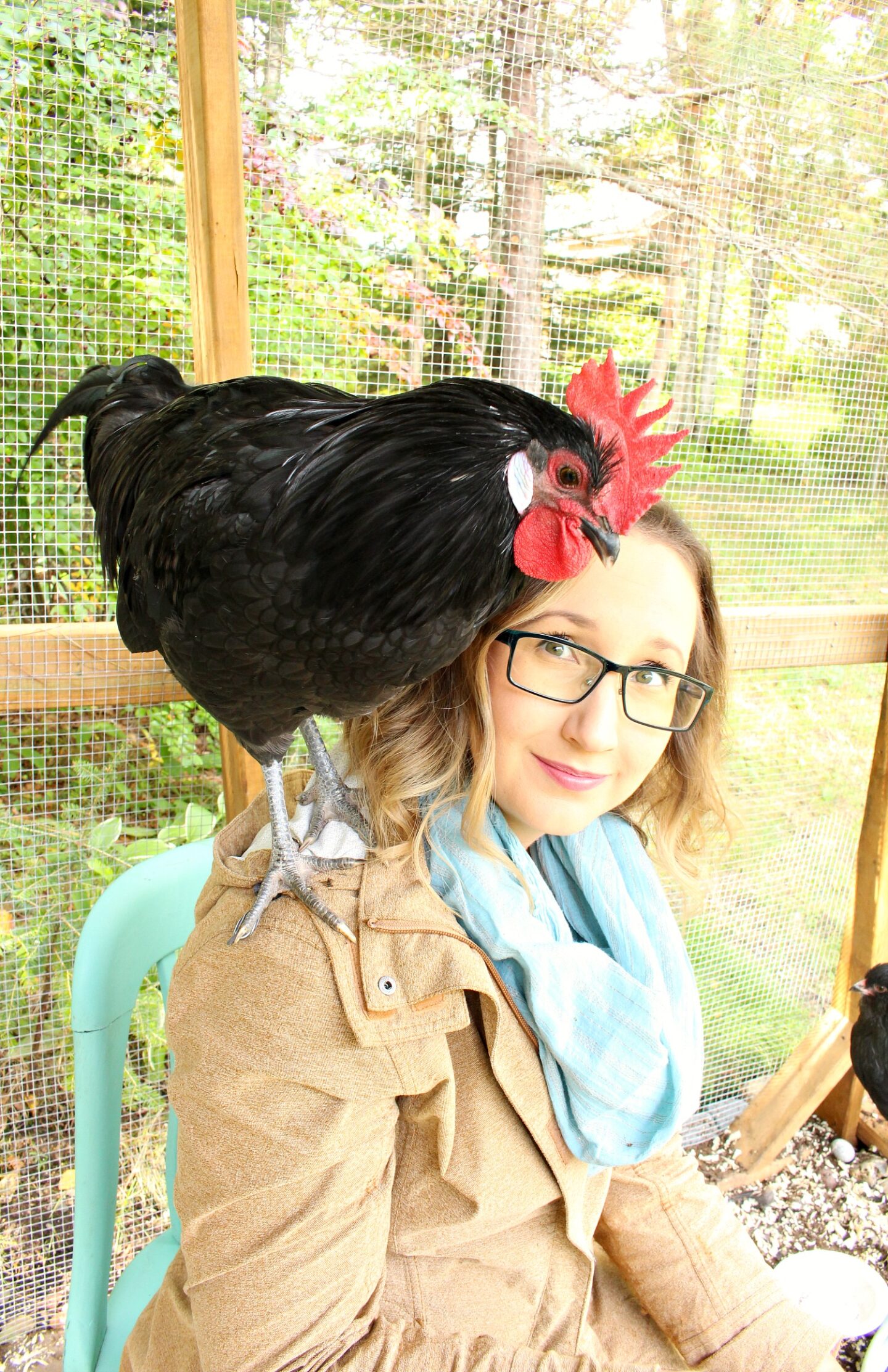 He jumped up there on his own accord! 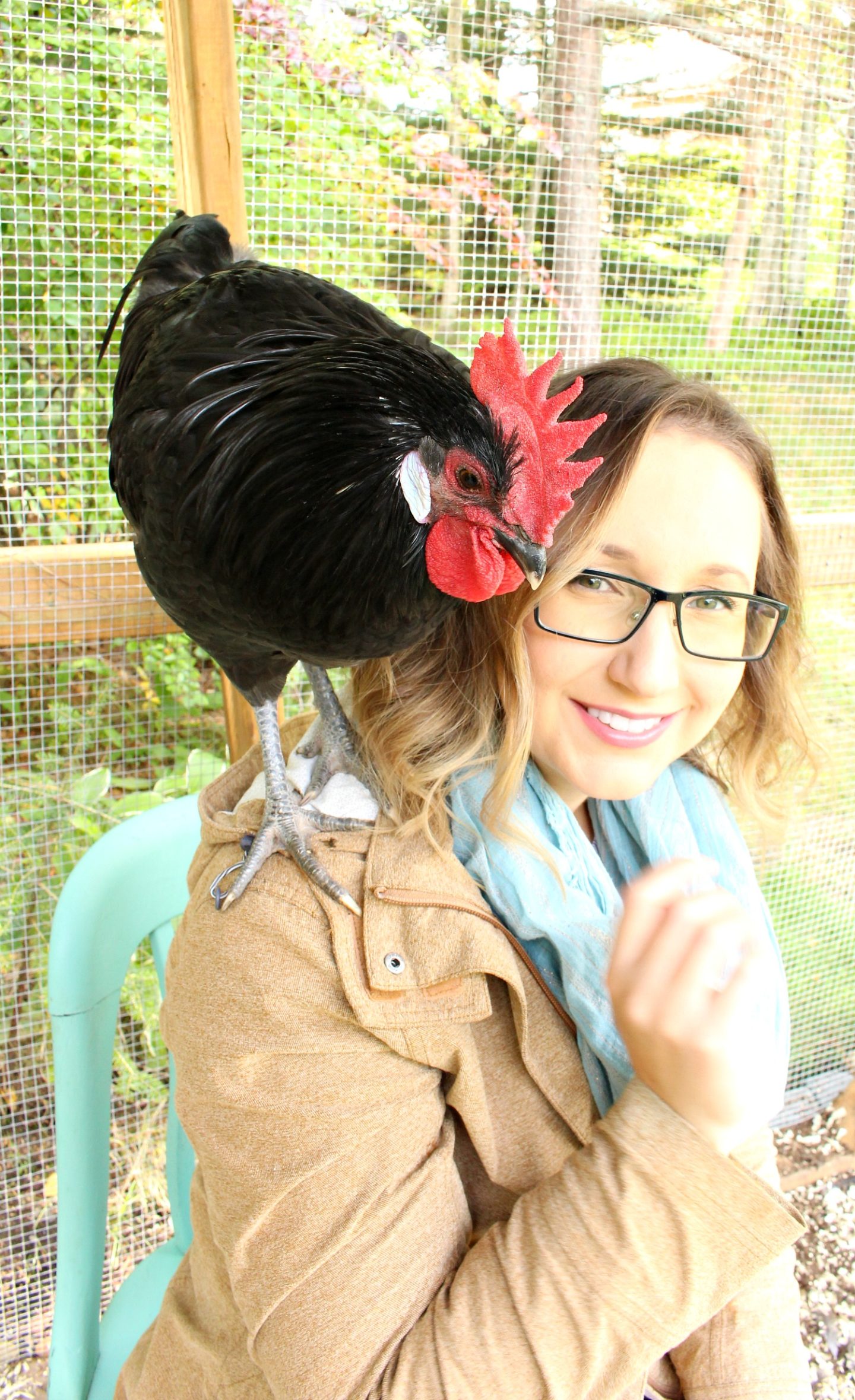 It was amazing watching Pewter develop into a full grown rooster – while the other roosters were fighting each other, Pewter’s instincts took over and he started to behave very authoritatively.  He would herd the gals (and roosters) inside when he suspected trouble or when it was nighttime.  He wouldn’t go inside until everyone was in the coop for the night.  So on the rare occasions when a hen or two were dawdling outside when the automatic chicken coop door closed, he stayed behind to keep them warm.  This happened on a below -20 Celsius night, and I’m convinced that he saved the life of my two girls left outside by keeping them warm and calm.  I went to check on them that evening – luckily! – but it had been quite a few hours in the heart-stopping cold.  The silkies wouldn’t roost, so Pewter would huddle on the floor of the coop with them to lend some body heat.  I learned to interpret his crows and he had alerted me to more than one flock problem I may not have discovered myself (like a rooster with an eye infection and a hen who nearly suffocated in a bag of shavings).  He only had one odd failing as a rooster: he wouldn’t share treats!  When I hand fed them, he crowded the other chickens out and wolfed down whatever I was sharing.  If I tried to exclude him and give the ladies a chance to snack, he’d peck me.  He drew blood in his pursuit of ALL THE SNACKS.  He really should, as a rooster, share the snacks with his ladies, but he wouldn’t.

When delivery day came, I feigned an excuse and bought myself another week.  I couldn’t picture the flock without him and his big red comb and wattles.

The Problem with Roosters

That next week I was even more sad!  I really didn’t want to re-home Pewter, but I thought it was prudent to do it while I had the luxury of time and could find him a good home.  If I needed to re-home him, I might not find any willing takers.  There are a lot of unwanted roosters in this world, partly due to a renewed interest in backyard chicken keeping.  Backyard chicken keepers want hens to lay eggs, but when you buy chicks the standard advice is that you’ll probably get 50/50 when it comes to male/female chicks.  Maybe a person will keep a single rooster, but that still leaves a lot of unwanted roos.  So even in my small city, during chick season the classifieds were full of people trying to find homes for their roosters.  Many of them ended up in the soup pot.

If you’re getting straight run chicks, the rooster problem will be yours, but getting sex link or autosexing chicks (where you can choose a female or male chick when you order), just means the rooster problem is solved by the hatchery.  Often, that means death for the male chicks.  And if you Google “roosters killed hatchery” it will turn your stomach to see videos of tiny, adorable, chicks, peeping anxiously as they are brutally killed, sometimes ground alive or suffocated.  The same thing often happens in the egg production industry – no one needs or wants the roosters because farmers don’t need roosters for egg production.  The hens can happily do that on their own.  You only need roosters for reproduction and one studly rooster can fertilize many hens.  The end result is that countless male chicks are horrifically killed in the egg production industry – although new technology could put an end to this practice.

The End of the Story

Even though I knew I was so lucky to find Pewter a good home, I just couldn’t do it!  I couldn’t re-home him, at least not yet.

Months have passed and he’s been such an integral part of keeping my girls warm this winter.  He has really kept them safe, so I am glad that I kept him.  As he’s gotten older, he’s gotten more protective of the hens but, as expected, a little rough on them also.  Two of my girls have serious feather loss on their backs so when the weather warms ups – and they don’t need to fluff out their feathers to keep warm – I’ll sew them little protective aprons.  That is a major downside to keeping a rooster.  And sometimes he’s in a mood!  One day he pecked me because I wouldn’t let him hoard all the treats and when I picked him up to snuggle him, he pecked my face!  He’s not my snuggly little chick anymore.  Little jerk gave me a bloody cut from my nose to my lip – the day before a neighborhood holiday party.  I had been trying to hide the fact that we have chickens so I was wondering how the heck to explain getting beaked in the face, but everybody at the party already knew.  I guess I’m not wily enough to hide a crowing rooster.  But I didn’t have to worry!  Some neighbors have actually said they’re happy to hear him crow because it reminds them of a time they had roosters, while others just think it’s a nice rural sound.  Not a single soul has complained and most of my immediate neighbors are seasonal so I doubt they will either – the honking geese will drown Pewter out by the time they come back to the lake.  I purposefully set the timer on the automatic door so they aren’t released from the coop until 8 or 9am, so I’m not waking anybody up at an ungodly hour and that probably helps. 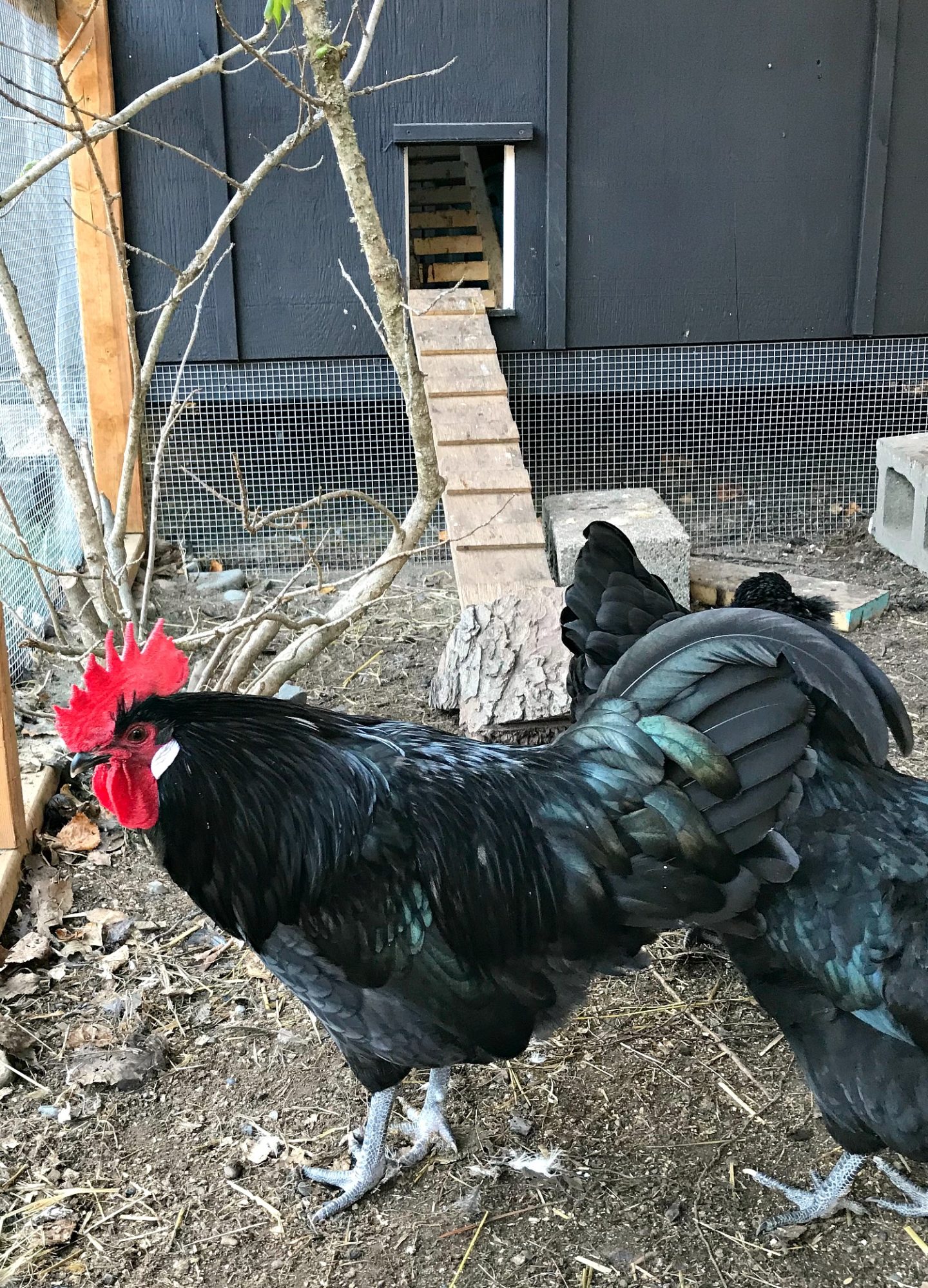 Hubby still has his reservations about keeping Pewter and has encouraged me to get more hens and consider re-homing Pewter again this spring.  For now, he has stayed with us, keeping my beautiful hens safe and the eggs fertilized.  I’ve learned a new skill thanks to him: looking to see which eggs we eat are fertilized and which aren’t.