As a new backyard chicken keeper, I’m still surprised at some of the tasks I need to do – last week I learned how to bathe a chicken (and why you need to).  I did not anticipate bathing a chicken would end up on my to-do list, but it did and it’s a good thing!  I originally decided to wash my Silkie roo, Pearl, because he had serious caked on poop in his fluffy feathers (he gets pooped on at night) and I just couldn’t handle looking at it. 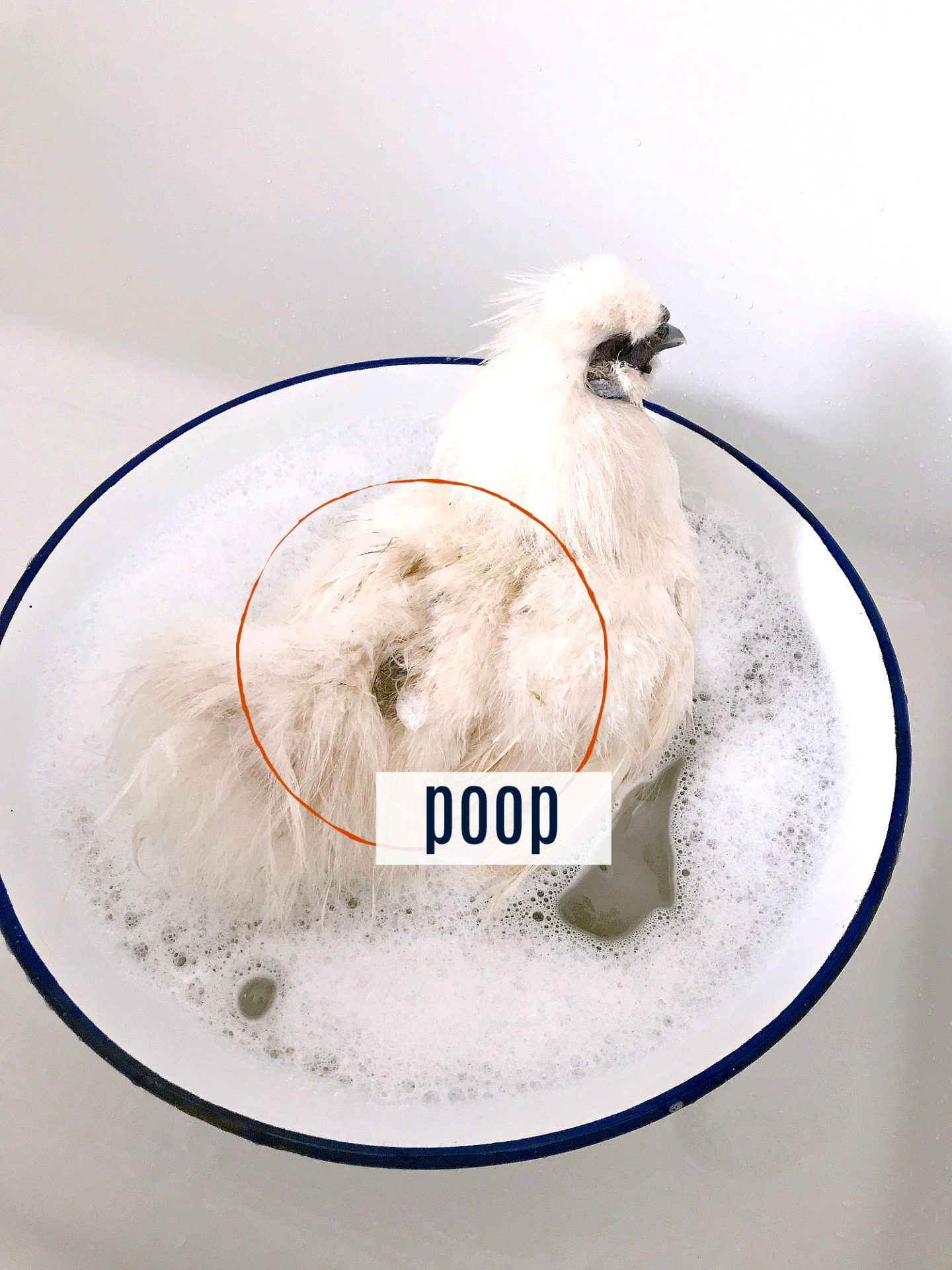 Blech.  It’s not fun cuddling a chicken caked in poop!  Meanwhile, my Wyandotte, Dolly, also had a wad of poop stuck below her vent.  Chickens will naturally dust bathe themselves to get clean (they wriggle around in dirt), but sometimes a little poop will get stuck and they need a helping hand.  Some breeds are more susceptible to this poopy bottom than others.  And although I made them an indoor dust bath to tide them over while the ground was frozen, they really prefer to dig their own hole and dust bathe where they want.  I bathed my two poop monsters because I didn’t like looking at poopy chickens, but later that day I learned that poop can attract flies and those flies can lay maggots and lead to Flystrike, which results in maggots burrowing into a chicken’s flesh.  I’m not even 100% how exactly it happens because I couldn’t read the whole post without gagging.  It’s SO gross! 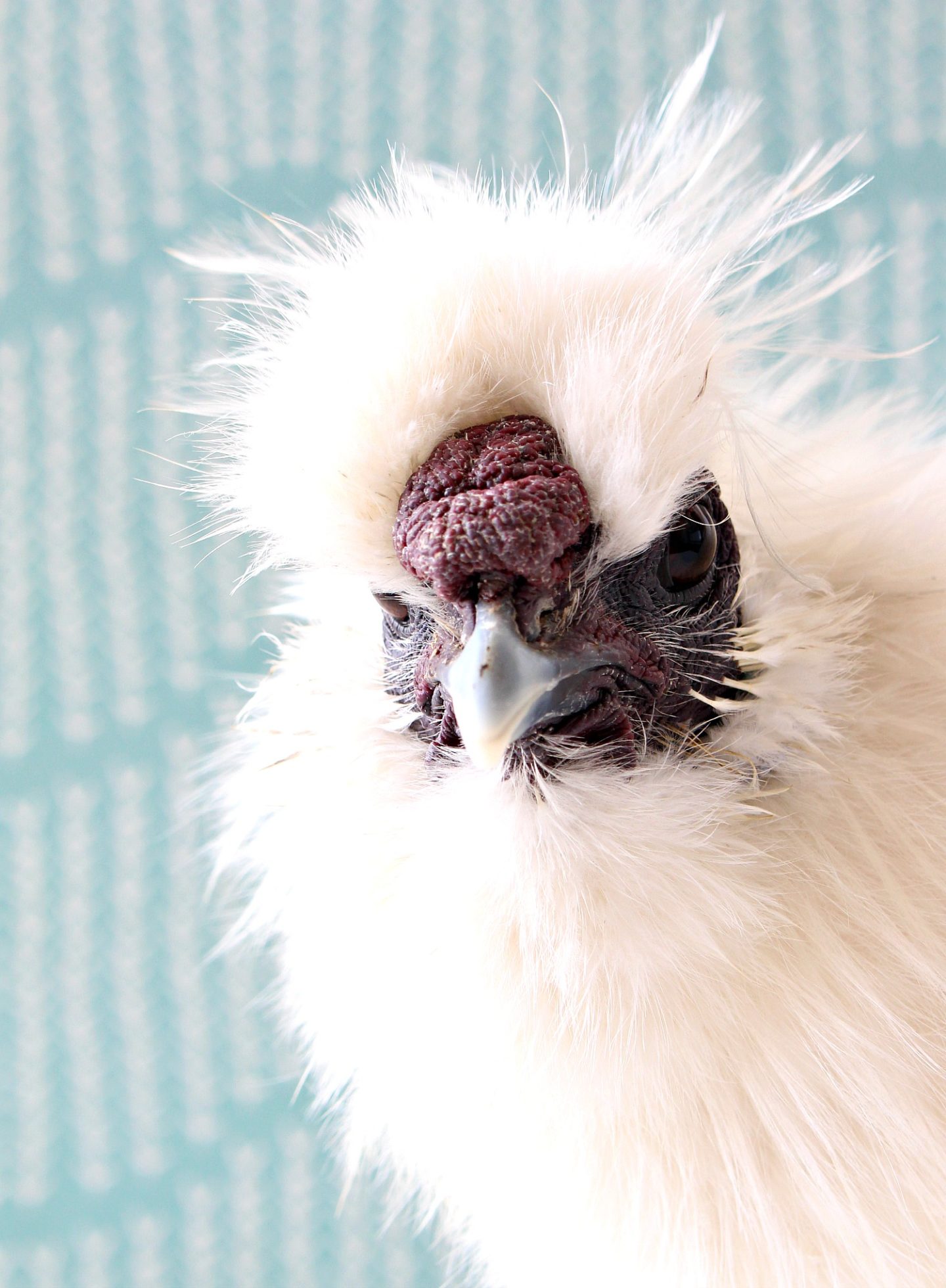 Pearl is suitably horrified at the thought.  I never want to deal with that, so this spring I am going to be VIGILANT about keeping those fluffy bums poop-free.  I had shared the story of bathing Pearl in my Instagram stories, saved under a highlight titled “SILKIE BATH,” just because it was funny.  But then I decided to write this blog post about how to bathe a chicken, so that new chicken keepers, like me, are aware of the threat of Flystrike, know how to prevent it, and can feel comfortable bathing a chicken, if needed, to prevent it from happening.  Because when I Googled “can I blow dry chicken,” I got recipes, lol, and not the advice I needed about how to bathe a chicken and blow dry it after. 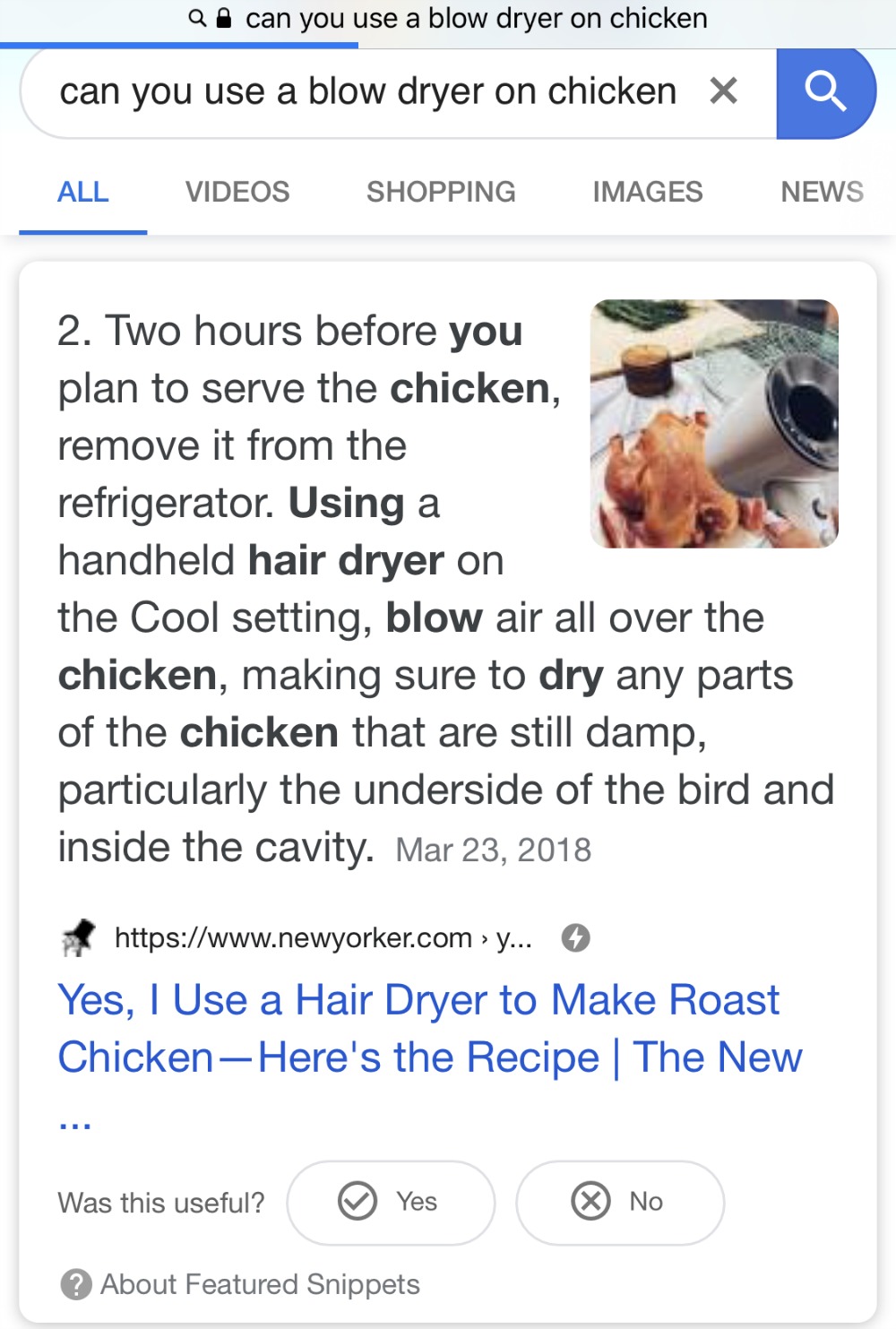 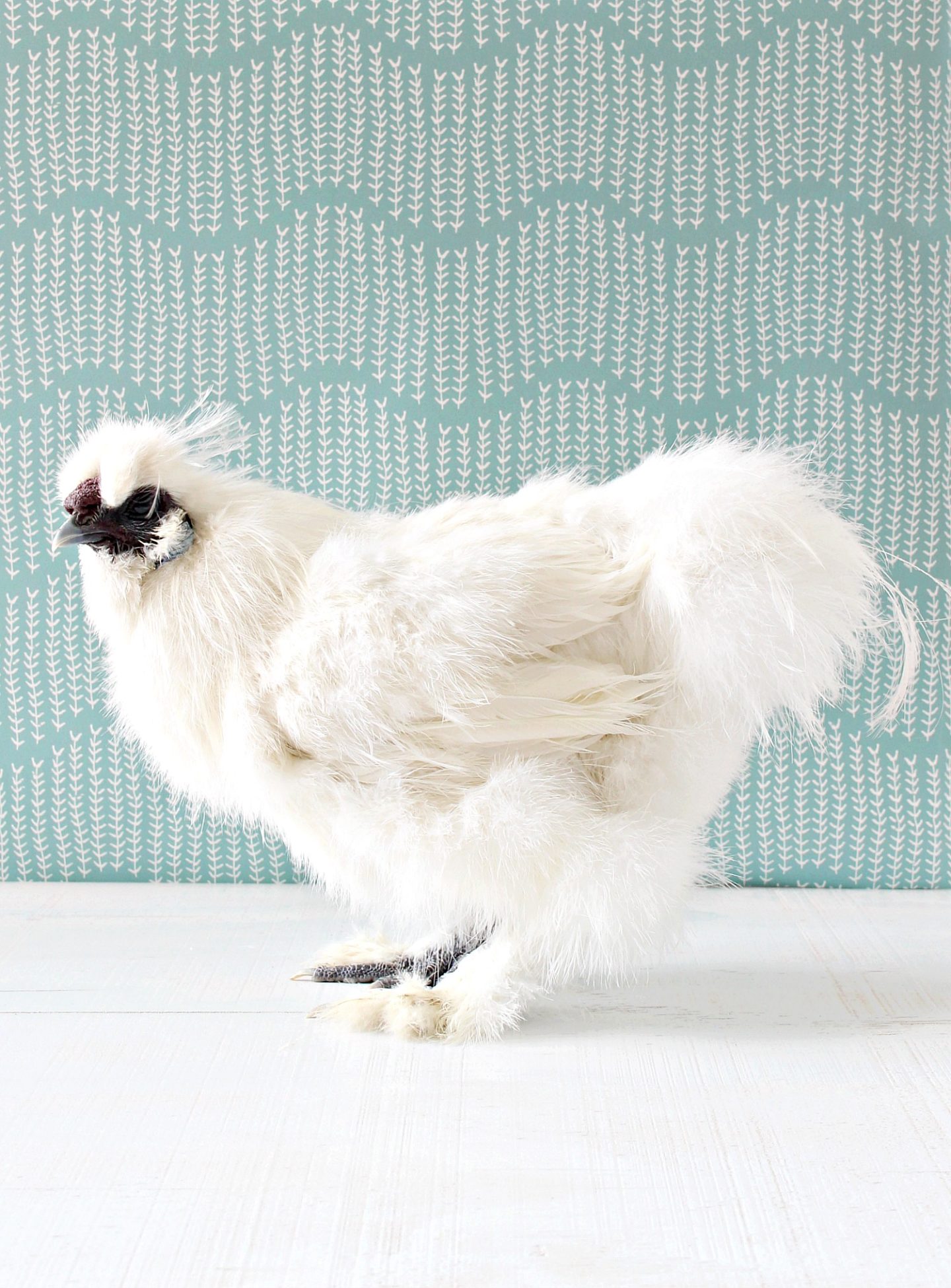 Supplies for Bathing a Chicken: 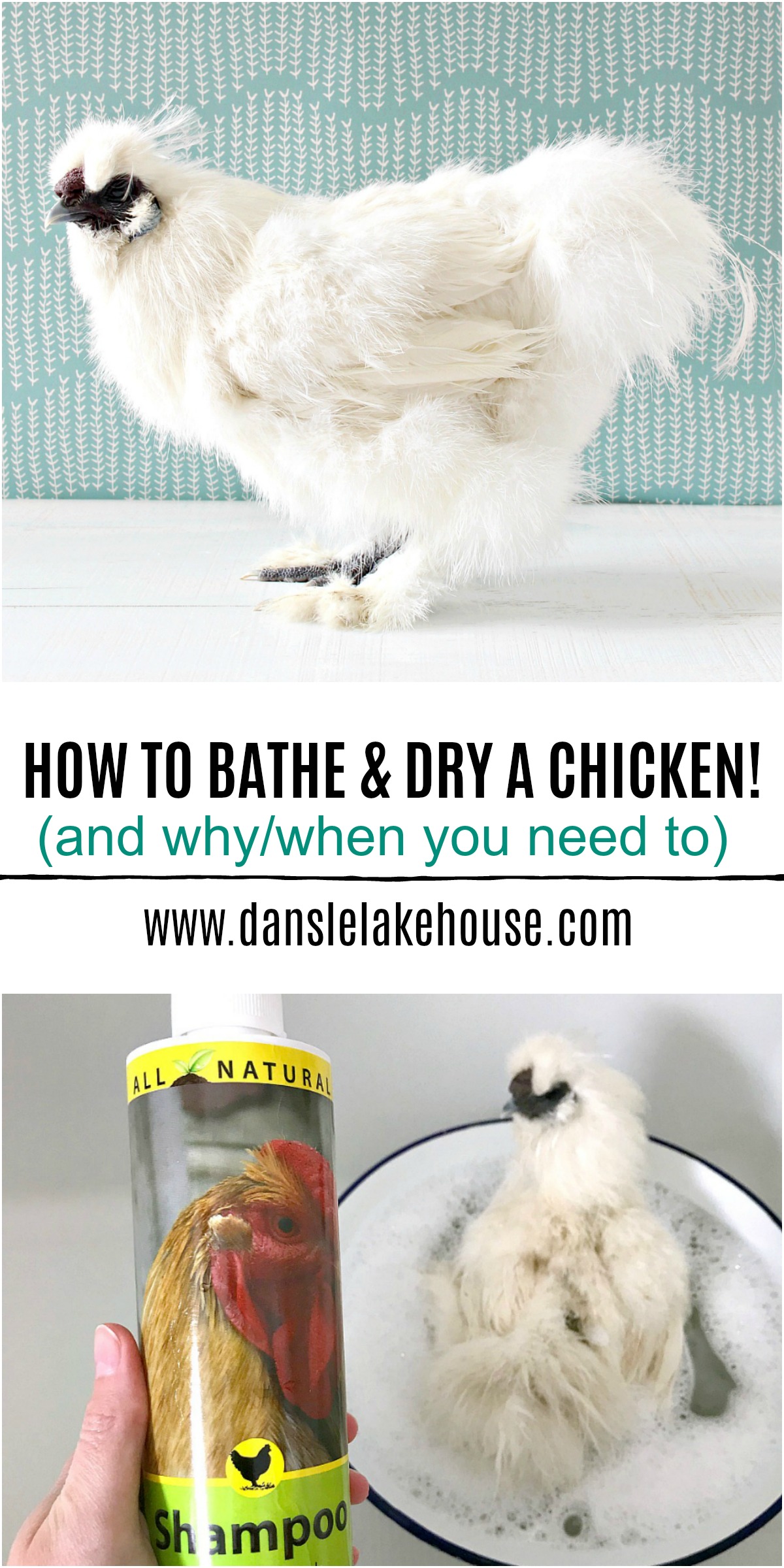 How to Bathe a Chicken:

I bathed my chickens inside a small wash basin I set inside the tub.  I’ve seen people bathe chickens in kitchens but I am telling you they will suddenly flap their wings, depositing poop EVERYWHERE, so in the tub is the safest space.  I filled the basin with warm water and added the poultry shampoo and let Pearl soak. 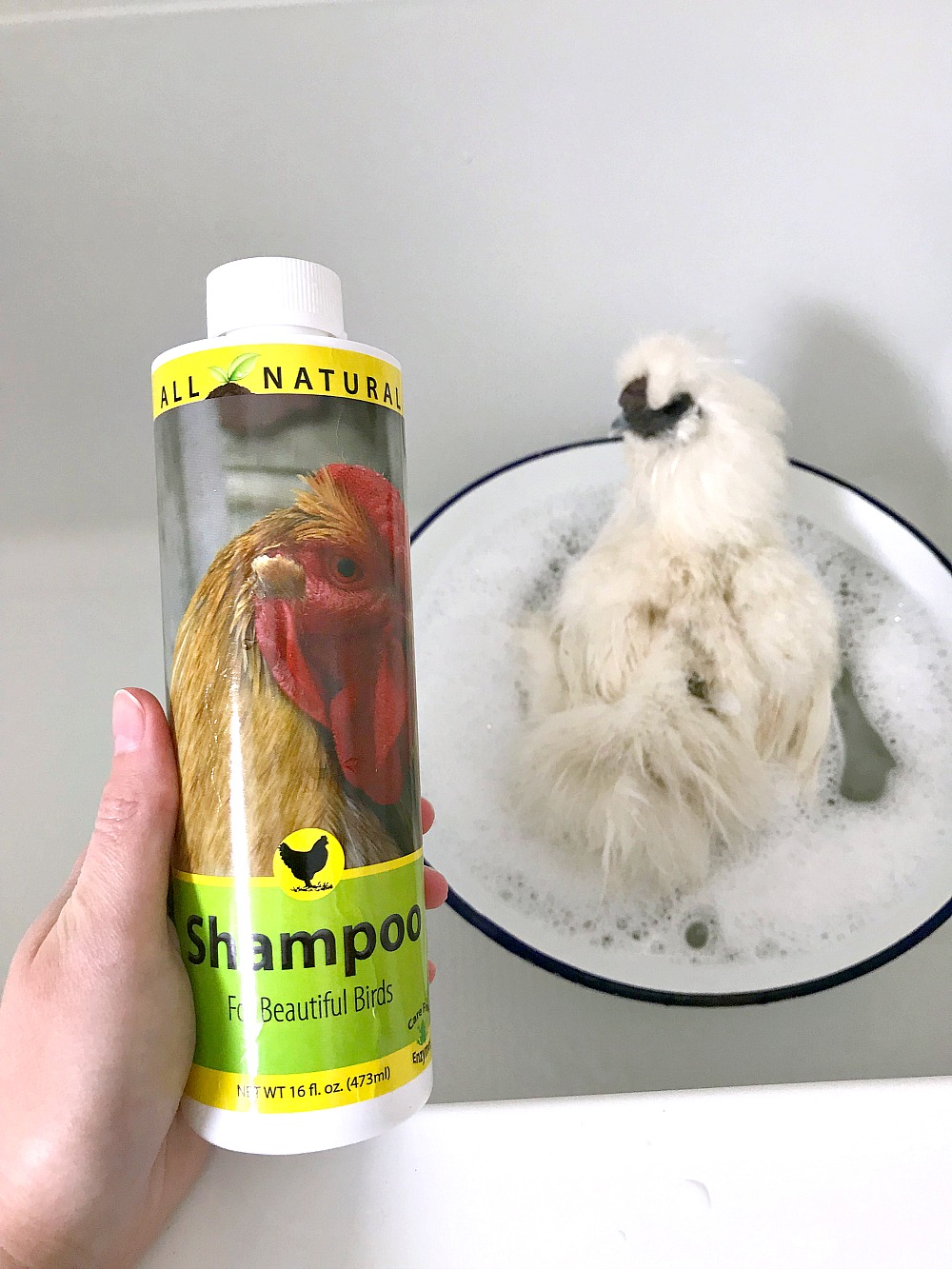 When he wanted to get out, I let him, and took that opportunity to gently hose him down with the removable shower head in my bathtub.  While he exited the bath, he freaked out and flapped his wings, covering me and the bathroom in poop.  So all is calm, bathing a chicken, until it’s not.  At that point I took a moment to thank Past Me for not bathing him in the kitchen.  I also poured out the old bath water and drew him a new “bath”. 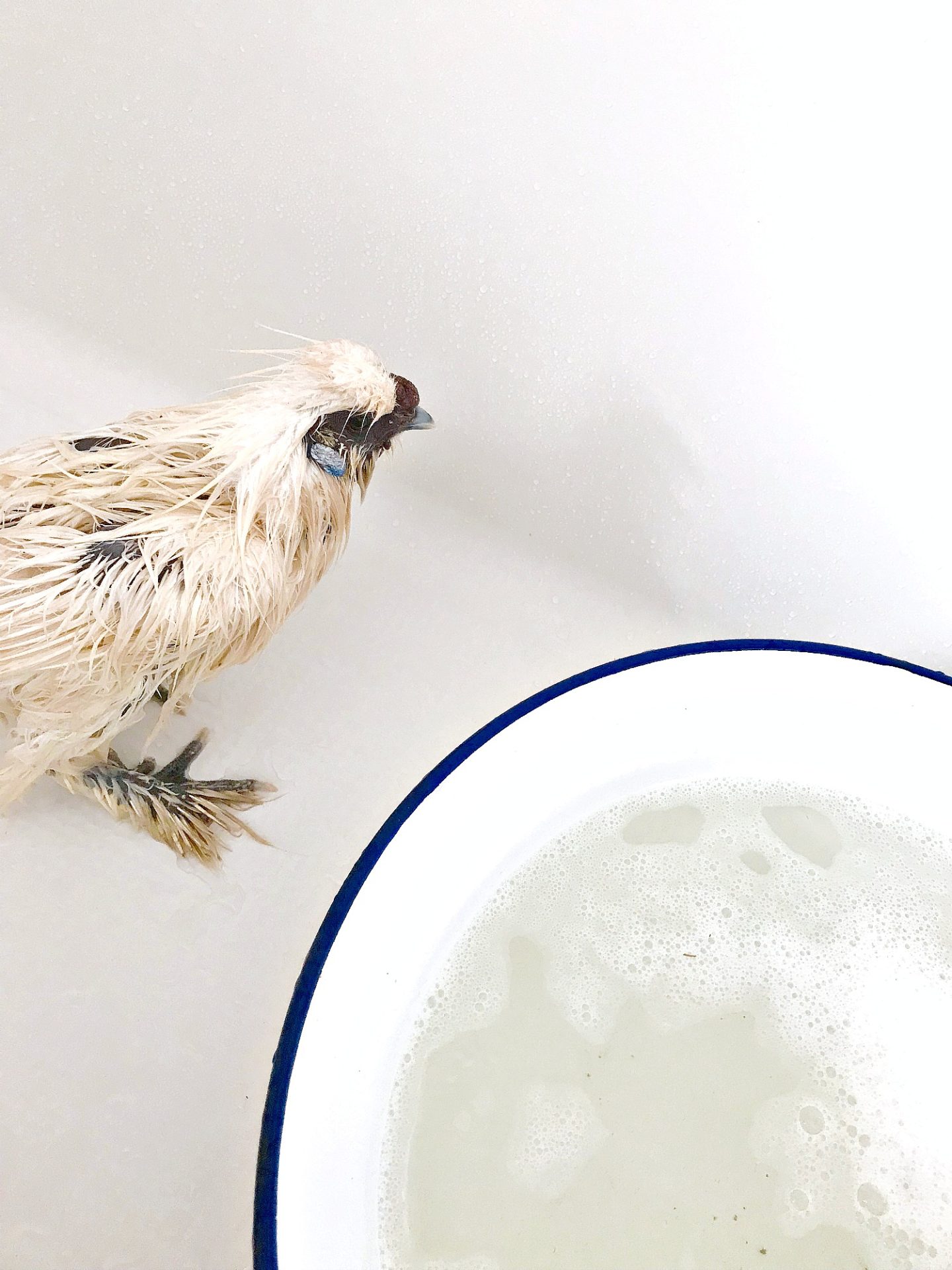 By this point, he was a lot cleaner.  I had to gently pull a few pieces of poop by hand (barf), but what was rock hard when dry was removed easily in water.  So he didn’t need any heavy duty scrubbing or shampooing, like you would for a dog or human.  He just needed a soak and the chicken poop kind of melted.  After the second bath, I removed him and dried him off gently with a towel.   Poor guy looks awful when wet. 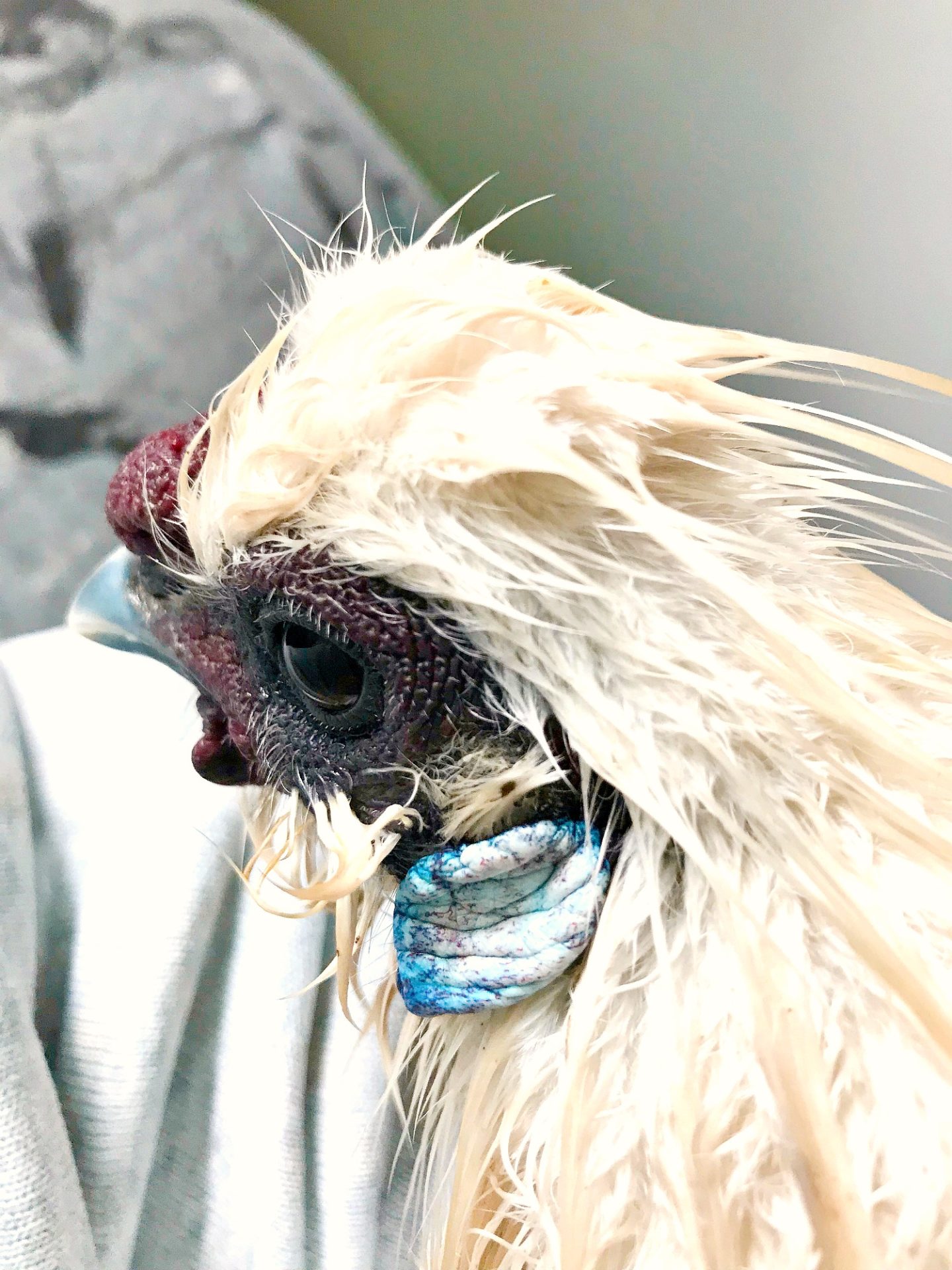 I placed him on a towel in a dog crate in the bathroom and let him air dry for a bit.  I closed the door and blinds for some dark and quiet.  If you live somewhere dry and hot, this might be enough, but I live somewhere cool and I didn’t want my chicken getting chilled so I used a hair dryer on low/warm and he LOVED it!  This is a screenshot of the video and the video is so funny – find it on my Instagram page as a saved story, you’ll laugh I promise.

It took a couple of hours to dry him fully, but he’s never looked so fluffy and beautiful.  And he LOVED it, he snuggled into my arms and just totally blissed out.  Hubby helped me dry him and we both got so sleepy lol.  Later, after I washed her too, I blow dried the Wyandotte and she loved it as well – but she was only tolerant of the bath, just like Pearl.  She seemed to endure it, then freaked out, then endured it again.  But they unanimously loved the blow dry – just make sure the air doesn’t get too hot/cold.  I kept my hand under the air, fluffing his feathers gently, to monitor the temperature and we only blew the air in the direction of the feathers – not “against the grain” if that makes sense.

I wasn’t planning to put together this post, so the photos above are all just cellphone photos – to make up for the grainy quality, here are some lovely photos of Pearl, all scrubbed and puffed.  Plus some neat facts about Silkies, to get the horrible thoughts of poop and maggots out of your mind! 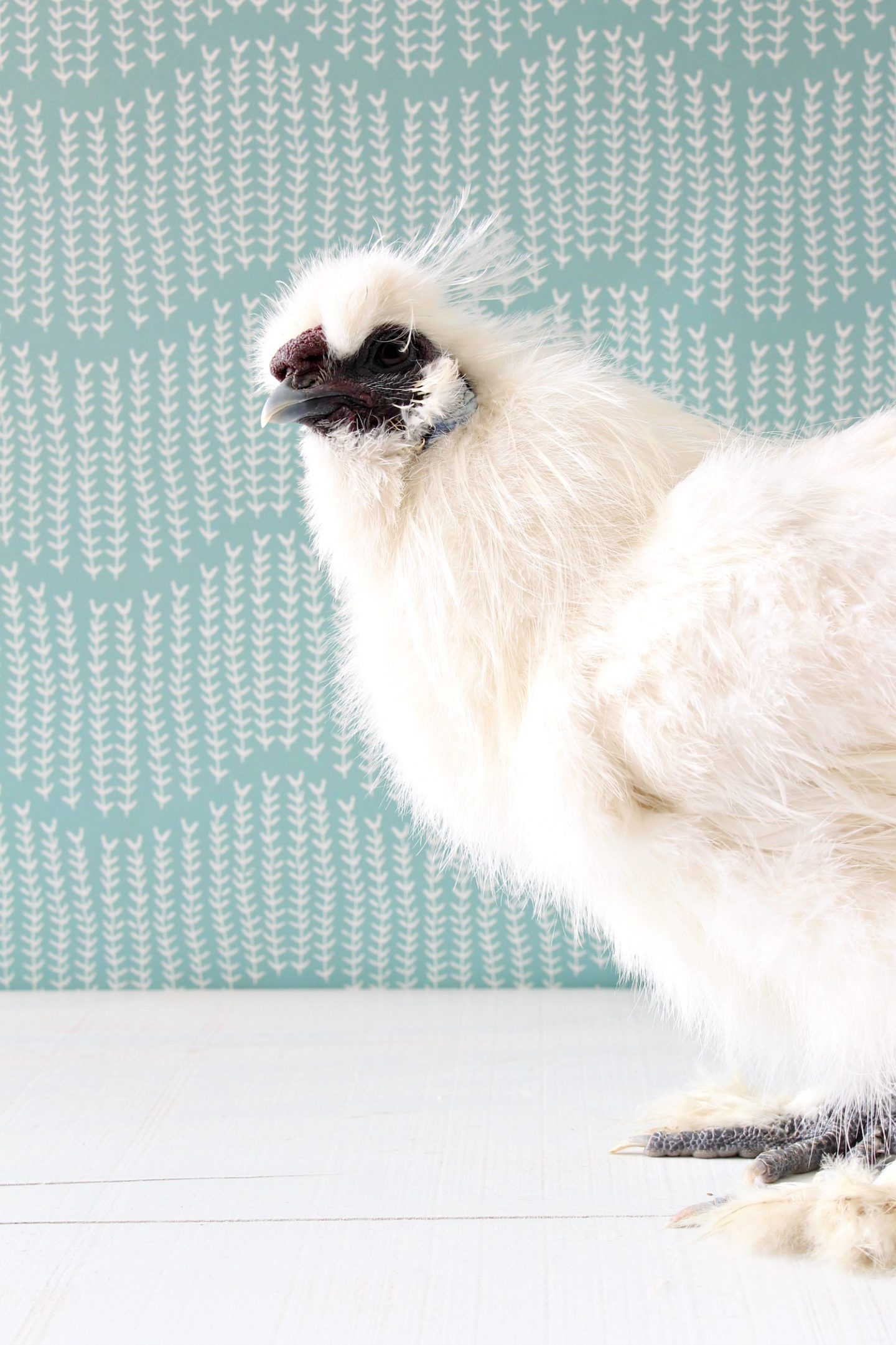 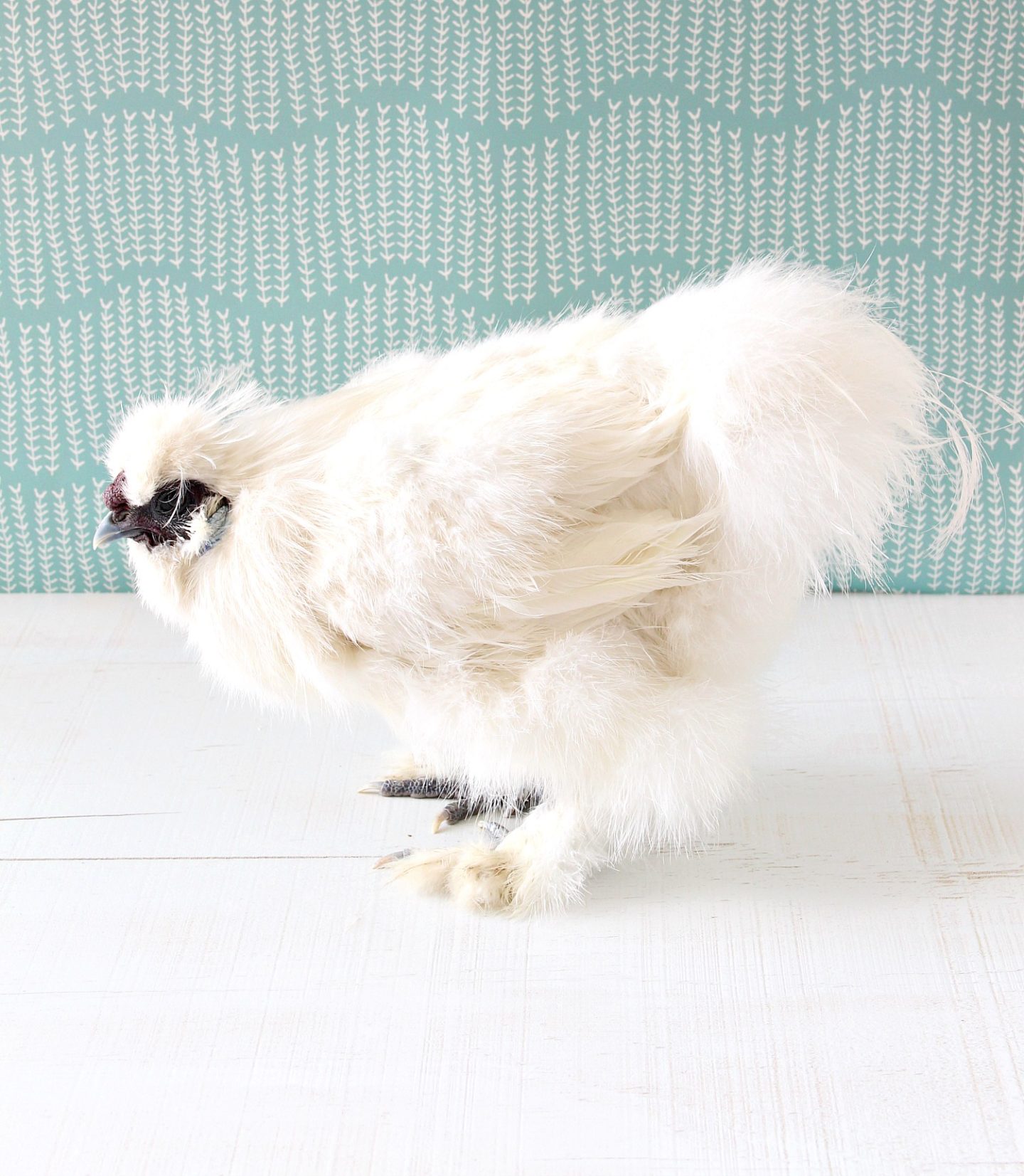 If the dictionary would like a photo to put beside the words “fluffy butt,” here ya go! 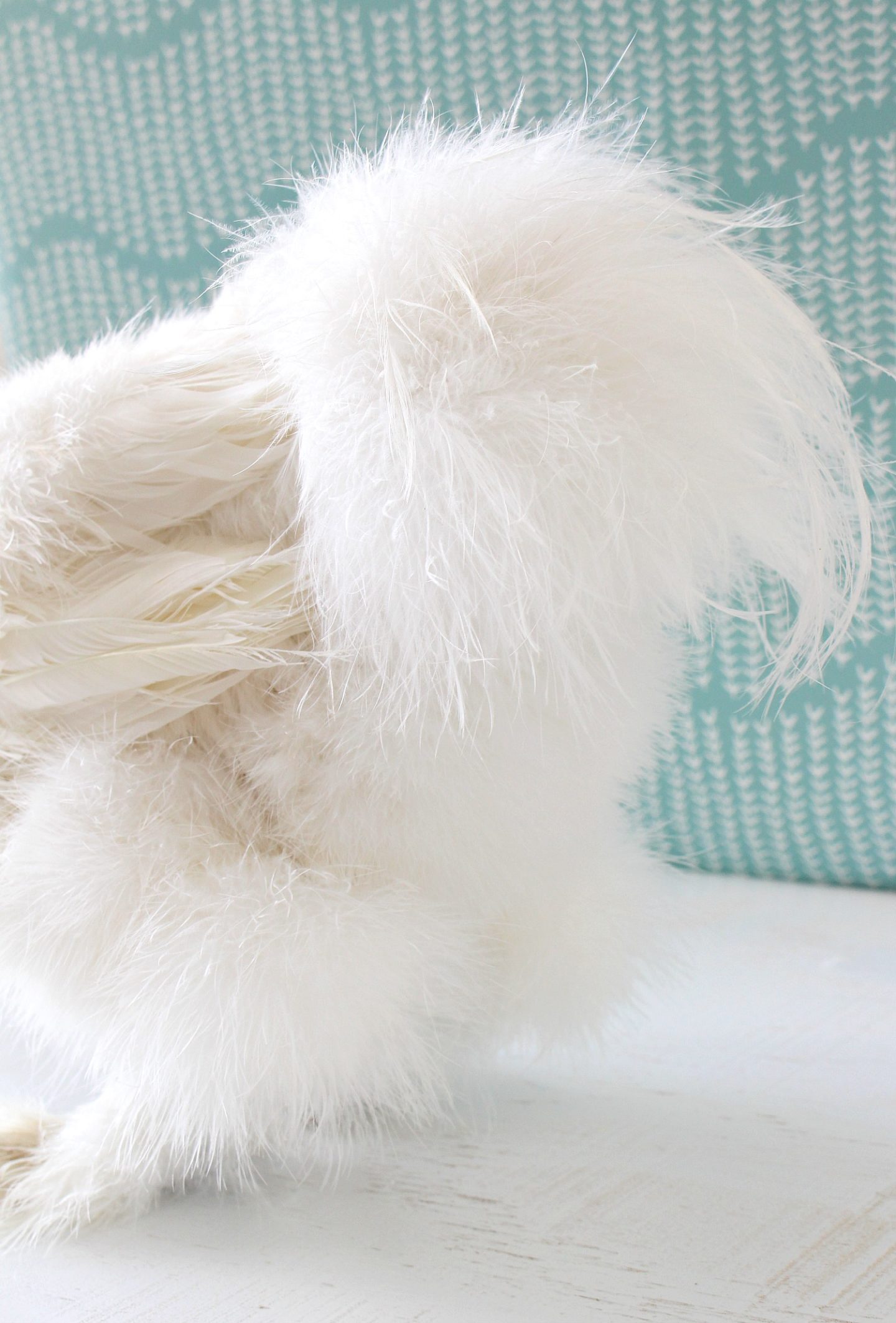 I also got some really great photos of his face.  Silkies are an unusual chicken breed, with all black skin and unique plumage.  This breed has been around for a long time and apparently Marco Polo recorded its description in his journals (around 1290-1300) as a “furry chicken,” which totally cracks me up.  Silkie combs look different too, like a little walnut as you can see below.  And they are always black or, like Pearl, a rich mulberry color.  They also have an extra toe!  Five, instead of the usual four, so you can spot the silkie chicks easily in my chick photo shoots. 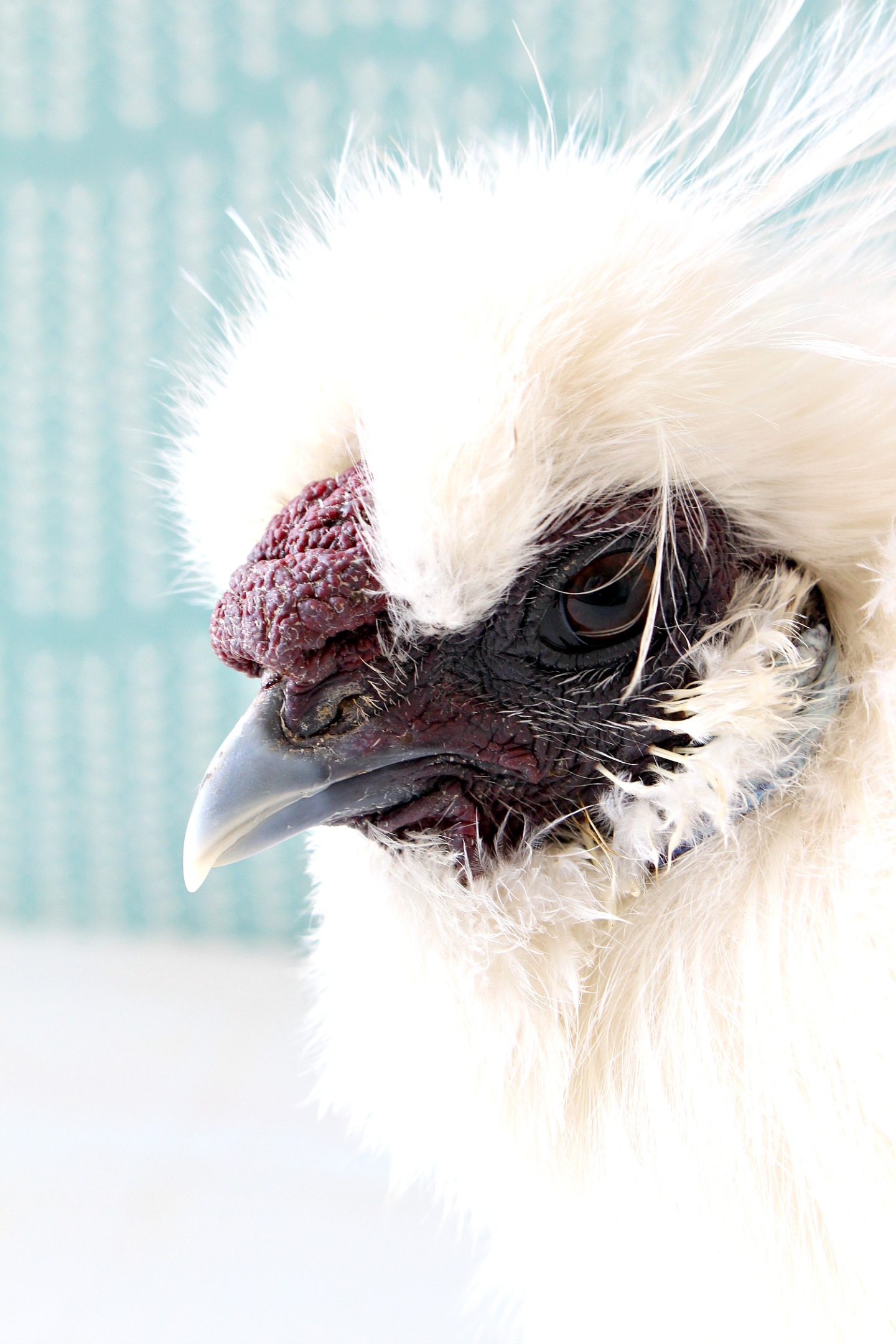 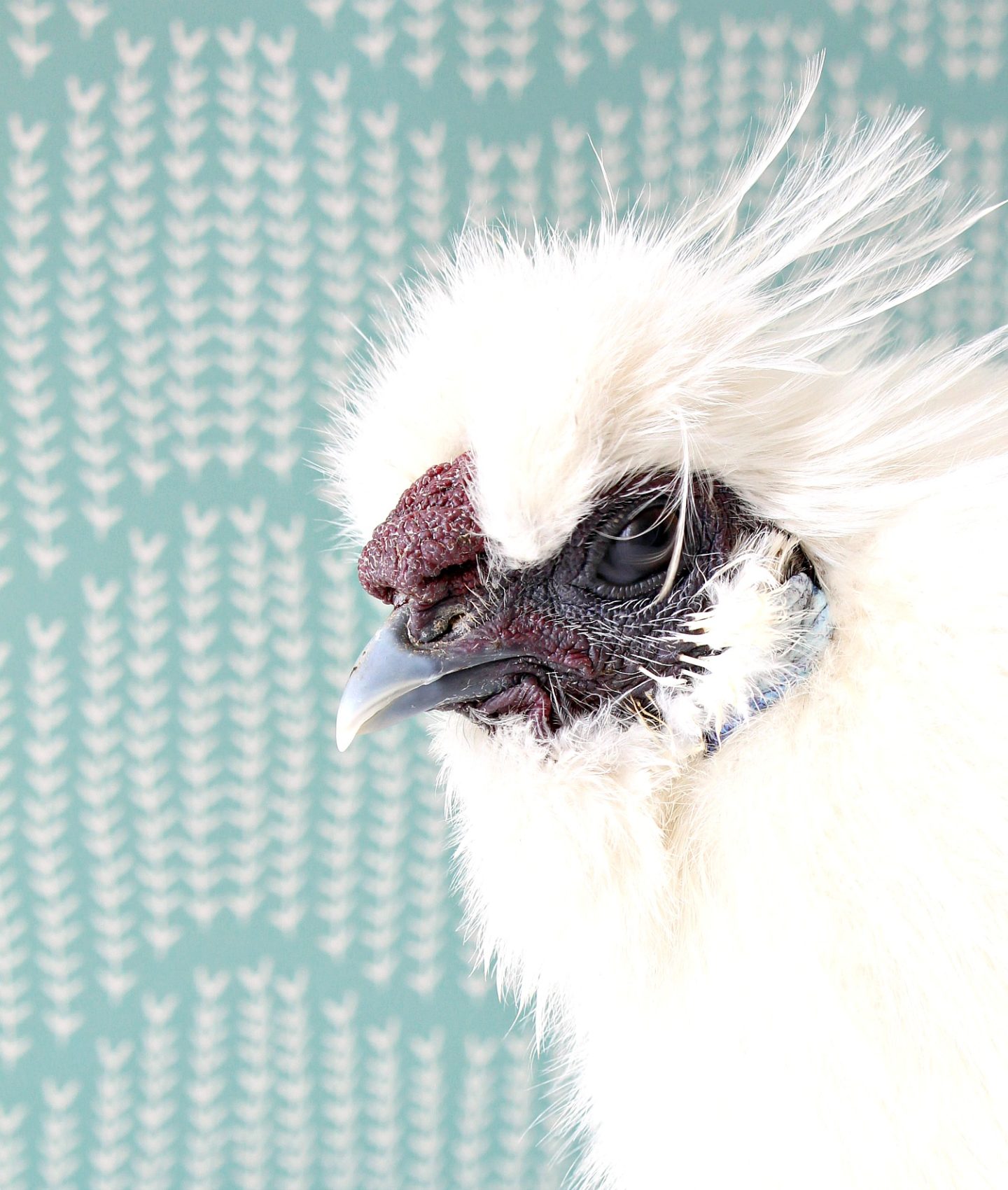 The Silkies took longer to mature than my other chicks, but once I saw Pearl’s streamers form – those long wispy feathers – I knew he was a rooster and that I had given him the worst rooster name ever.  We joke the P is silent (but I still call him Pearl, he’ll always be Pearl).  I had hoped both Pearl and Coal, my two original Silkies, would be hens, but I got one of each.  He’s a calm rooster, as Silkies typically are, although he’s more skittish and shy than Coal, he’s definitely never aggressive. 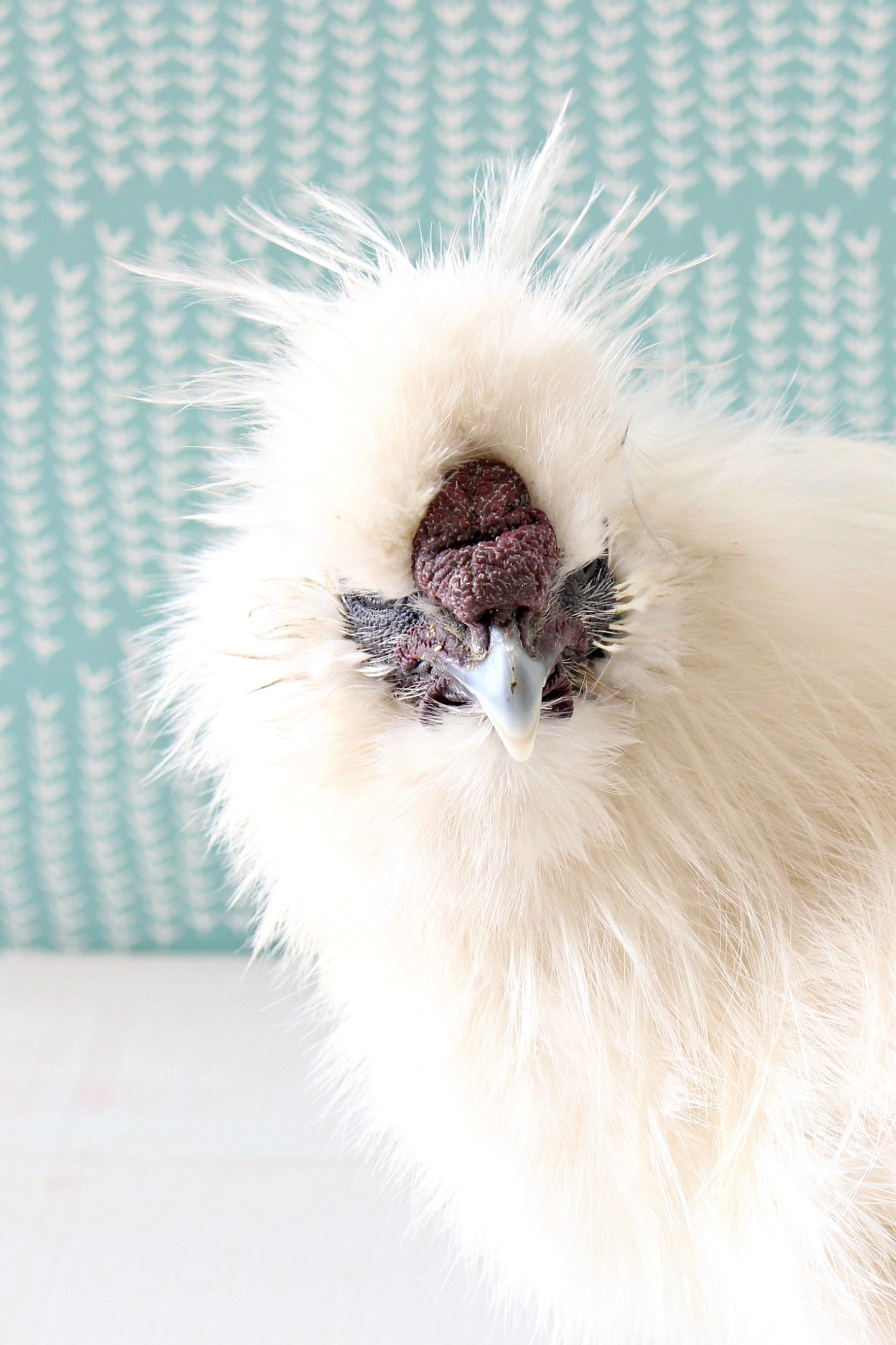 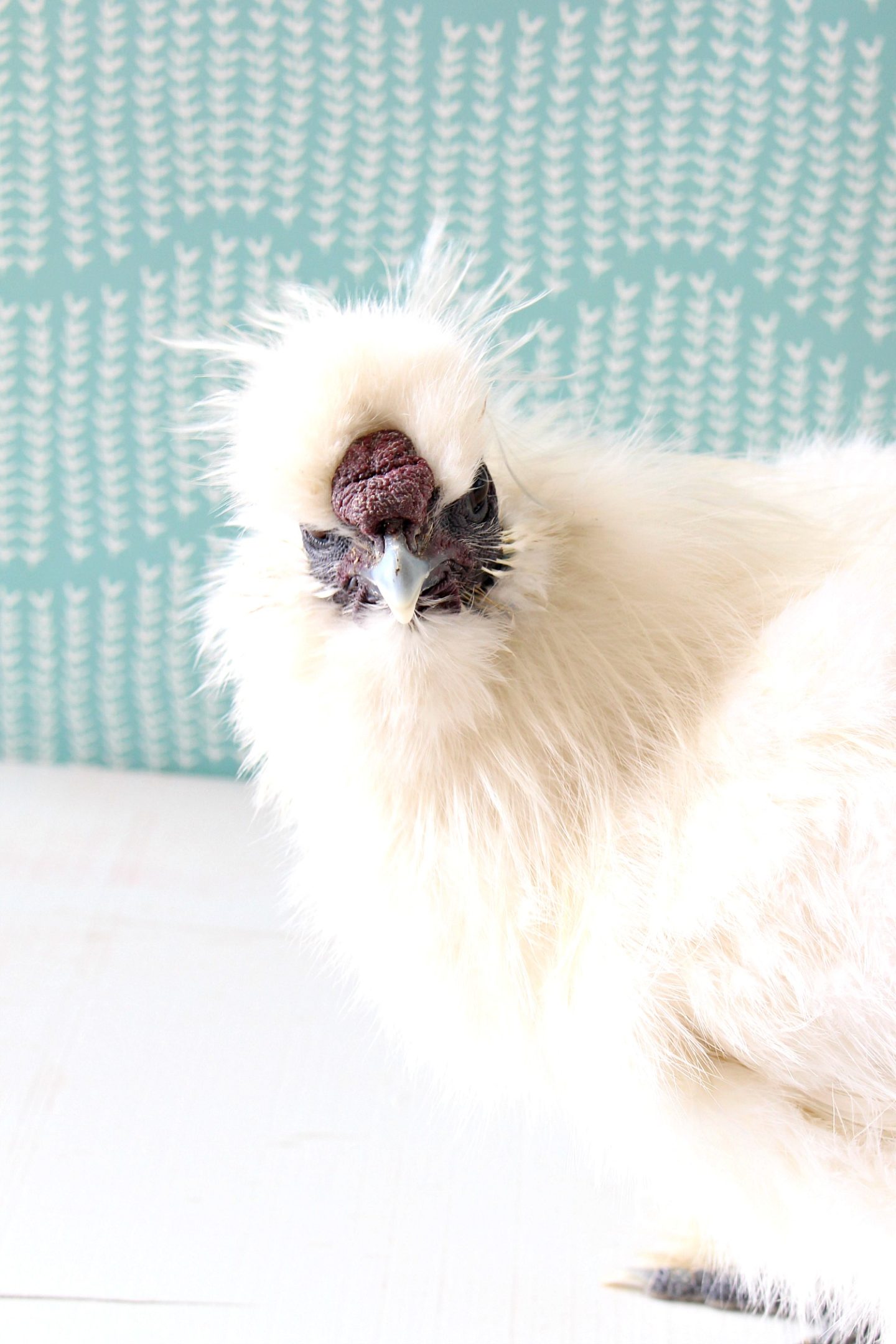 Their feathers prohibit them from flying so they don’t roost much.  Other chickens sorta fly, enough to get up to a roost, anyway, but the Silkies don’t.  Their feathers don’t inhibit their cold hardiness too much though, mine handled our brutal winters okay although there were a couple of days when Coal yipped and sort of clamored into my lap when I crouched down to pet her.  I think she was a bit cold, so this year I want to built a ramp and low roosts for her.  But the Silkies can’t handle being wet, so wet conditions are not ideal for this breed. 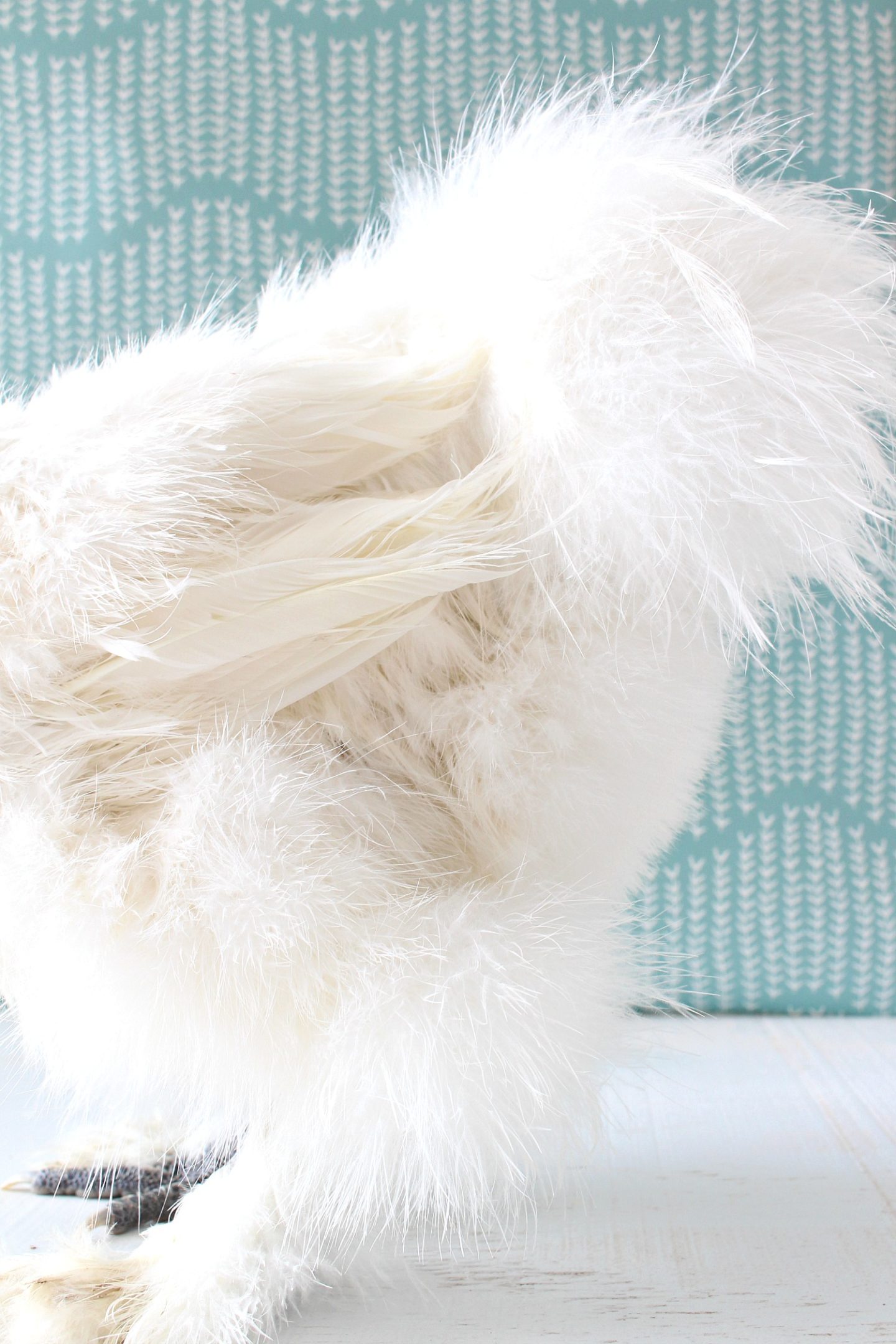 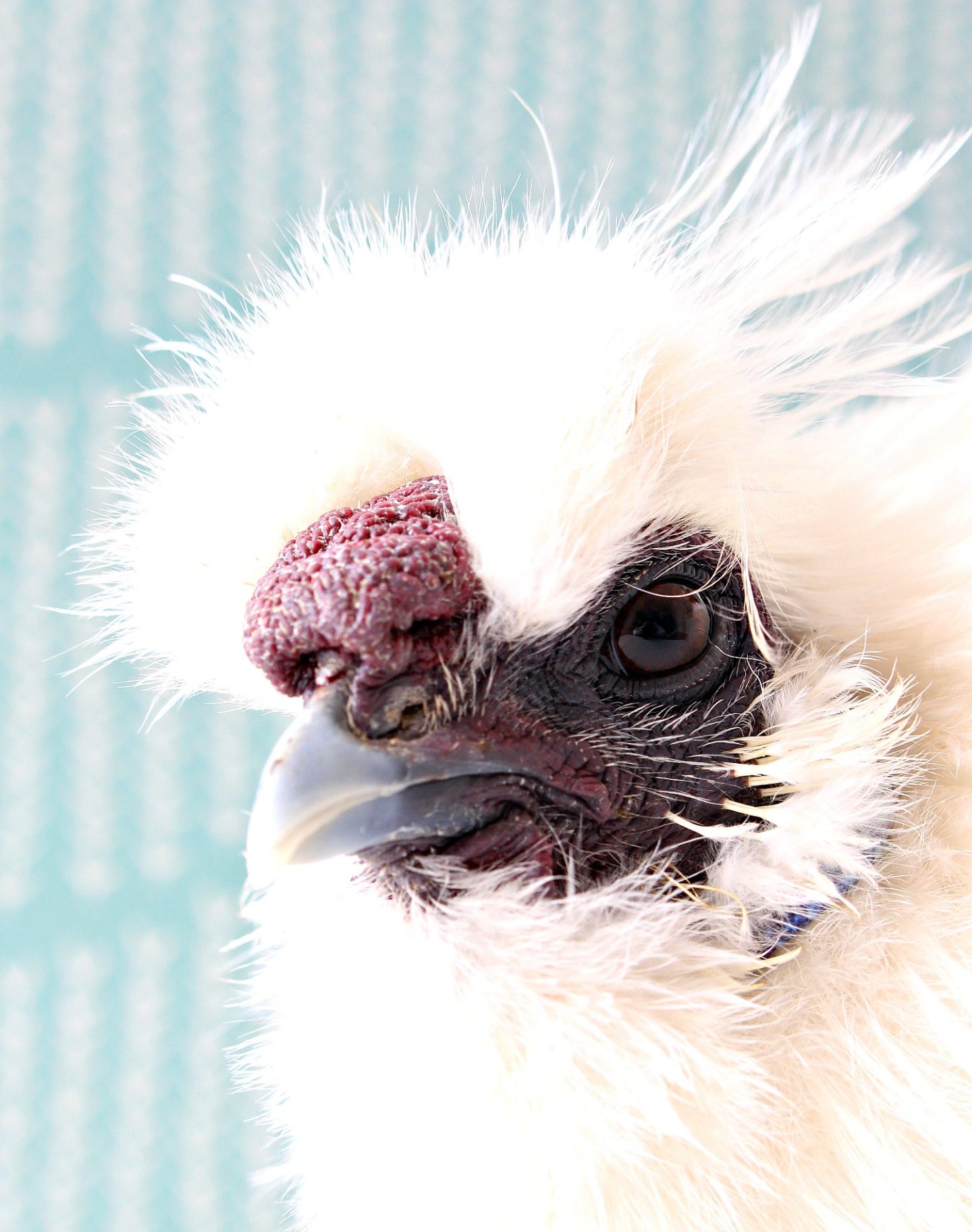 A little behind-the-scenes action, so you can see he’s really small! 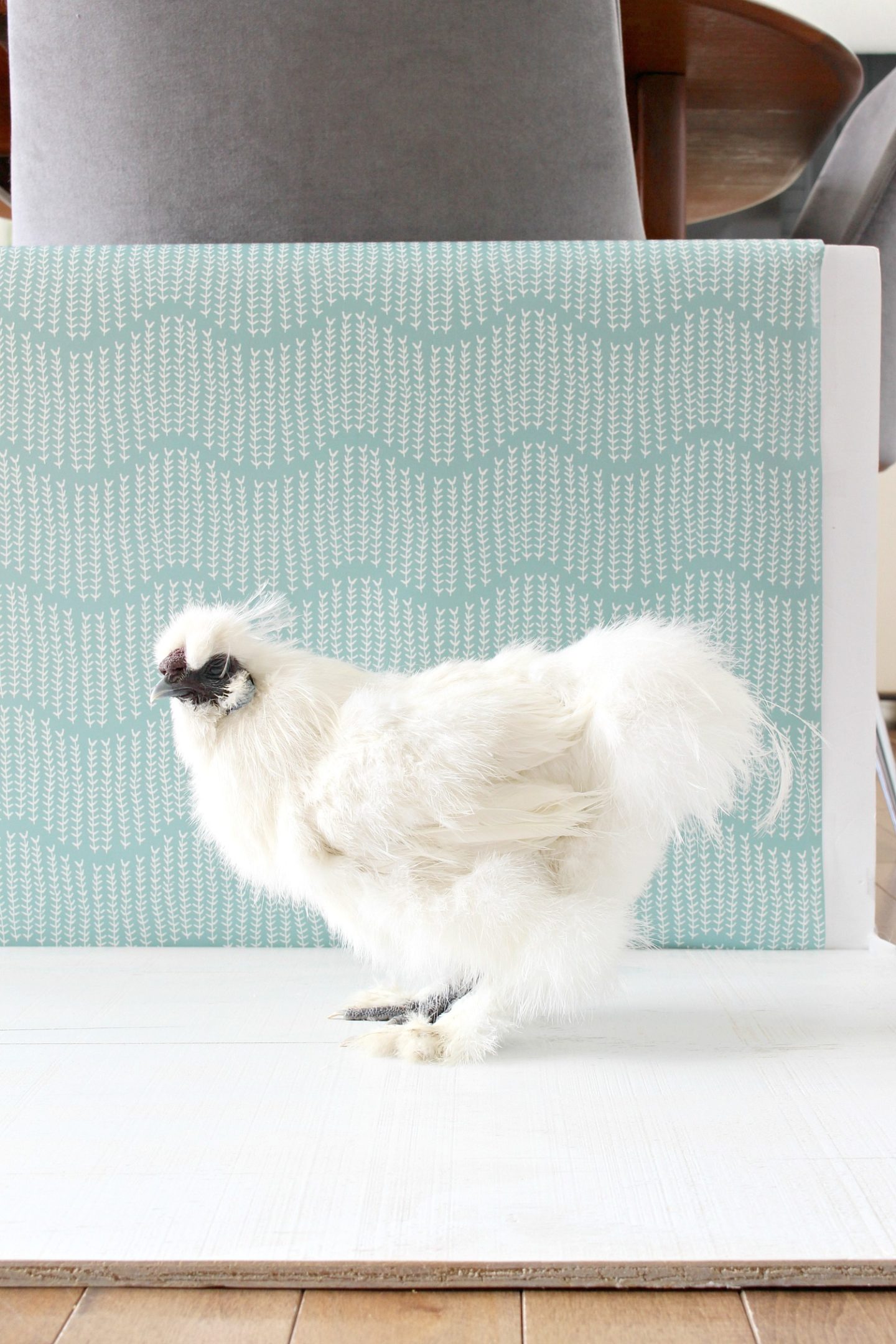 I hope you found this post on how to bathe a chicken helpful – if you don’t have chickens, hopefully it was entertaining at least!  If you need to bathe a chicken, just be firm and gentle with them and schedule a bathroom cleaning and your own bath immediately after, lol.  And make sure they always have a spot to dust bath, and that the coop/run is cleaned of poop regularly, to keep chickens are naturally clean as possible without a soapy intervention.